I did a lot of moving in July, making tracks eastward till I hit Massachusetts. Eight stops, from Ohio to New York, where I spent most of the month, crossing the Mass state line on July 28th. Read on to see where I was and the adventures taken…

Four nights at Punderson State Park, where I heard a lot of fireworks but never saw any. What looked like a nice private campsite was actually the worst infestation of little green flying bugs I’d ever seen. The park was booked up for the holiday weekend so I couldn’t move, meaning I spent most of my time either walking the campground loops or inside the Alto trying to avoid being swarmed. Ugh. Well, all campgrounds can’t be winners, can they?! This is the only photo I liked from the whole four days I spent there, so you get to see it again (it was in an earlier post, sharp eyes might notice…) 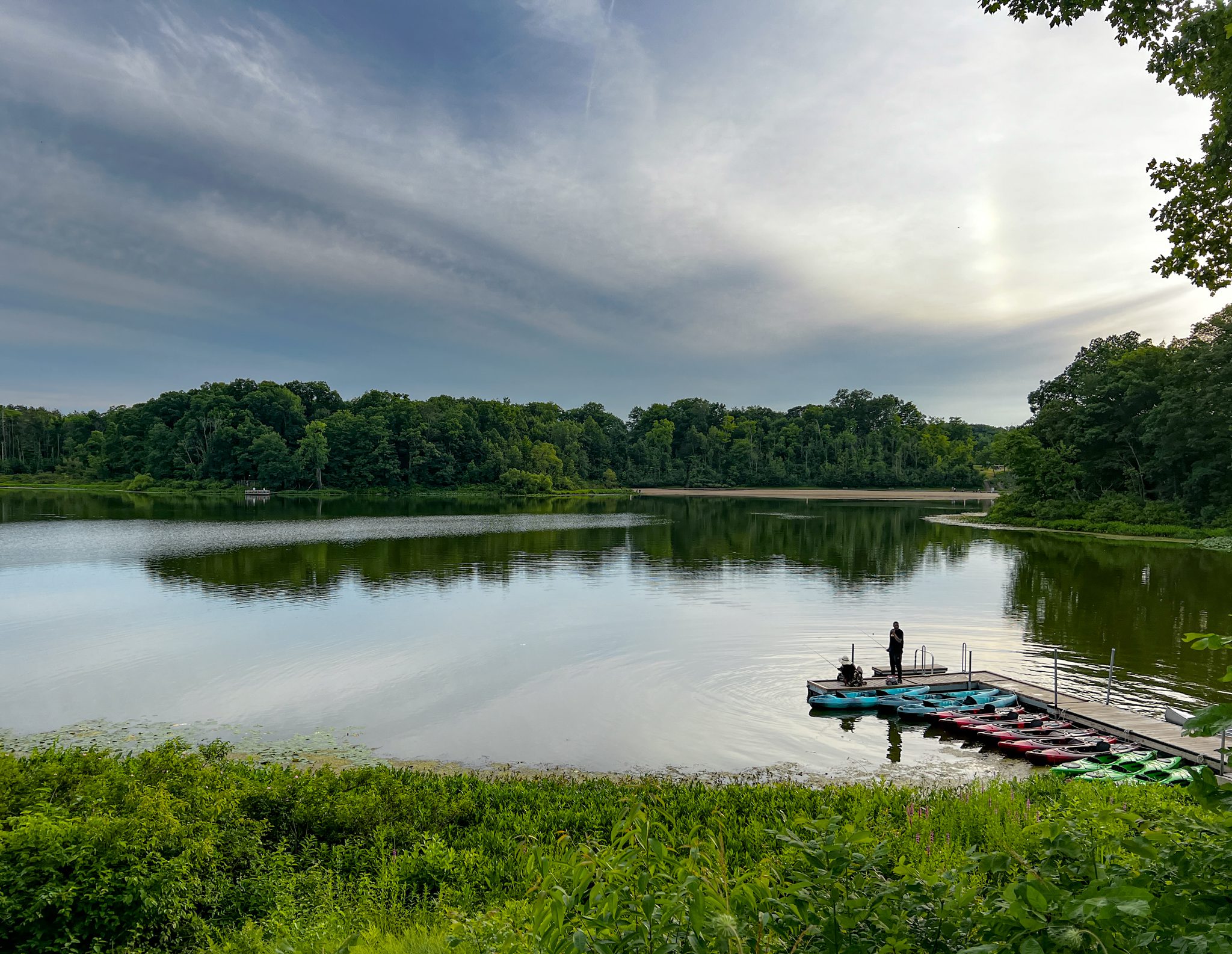 New York in a Nutshell

My first stop in New York State was Lake Erie, which was an unexpected pleasure and also earned me the unofficial “Camped by all the Great Lakes” badge. 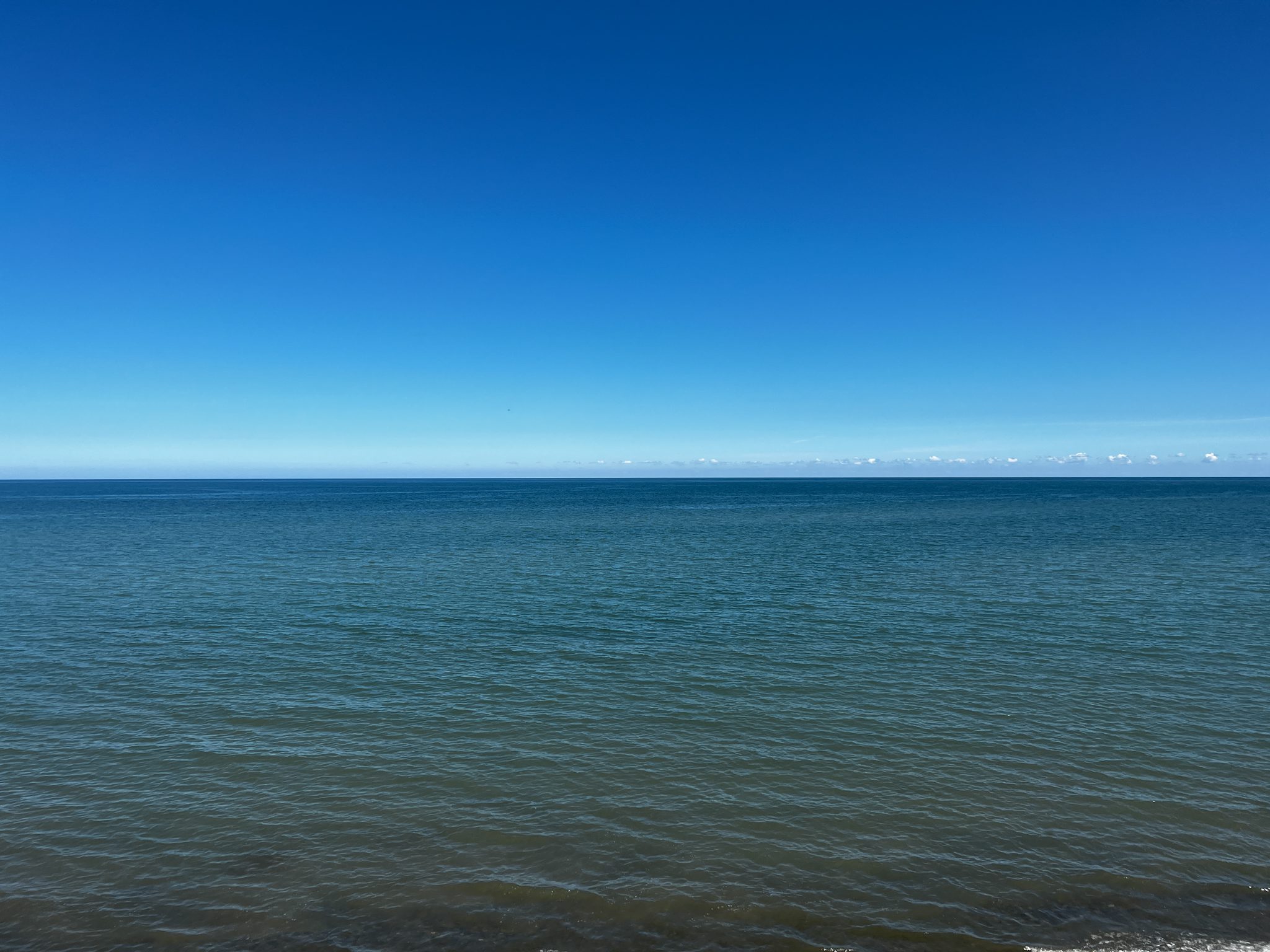 From there, I spent four nights at Letchworth State Park. The spot I had was pretty good, but to get to anywhere interesting, like the falls the park is famous for, you gotta get in your car and drive for 20-30 minutes. The nearest town to the east is Geneseo, 25-30 minutes away, with stores, some fast food places, and your pick of gas stations (although be warned that a lot of the independently owned stores are closed on Mondays). Heading in the western direction lands you in the small, slightly funky town of Perry, which has a very pricey foodstuffs corner store (the store’s name, butter meat co. market, all in lower-case probably should have been a tip-off to the pricing…) and a small but good bookstore, Biblio-Tech Cafe just across the street. Of course, I bought a book there.

Watkins Glen was a split decision for a couple of reasons. I had two nights in one spot and then two nights just down the road in the same loop. Turns out that first spot was nigh unto impossible to back into, so I used a spotter from a nearby campsite, who then wouldn’t believe that I could unhitch by myself and kept offering to help with that, even after I told him I’d been doing this stuff for six+ years. Sigh. Sometimes it’s really not worth it to ask for help from a stranger and this was one of those times. The weekend got even less fun when I realized that most of the sites in this loop had been booked by an extended family for the weekend, meaning I was camping in the middle of a block party/family reunion. They had a huge potluck Saturday afternoon right behind my site. I just put the headphones in and watched a movie. Sometimes escape is the best strategy.

I did like hiking the Gorge and also, it’s worth going into town to get the “made right in front of your eyes” cannolis from Scuteri’s Cannoli Connection (very generously filled, and super tasty!).

If I thought the Watkins Glen campground was a bit, uh, unusual, it paled in comparison to Gilbert Lake State Park. One thing New York State Parks have done since my last stays in 2019 is to remove all the camp hosts. So it’s kind of open season for breaking the rules, from leaving your trailer overnight without you in it, to staying up late and partying, or parking a half-dozen cars at your site. I lasted two nights at Gilbert Lake before I bailed on my last two nights because I just didn’t like the “deserted place in the middle of nowhere with a very unreliable cell signal” vibe I was getting.

Where did I go? A KOA about 30 minutes away. As road warriors of all stripes know, one McDonalds restaurant is just like the others, and sometimes that predictable consistency is just what you need to be able to relax. Same with KOA campgrounds. You get some friendly hosts, a nice spot, laundry and hot showers, and no drama. There were a fair amount of seasonal campers at this place, but enough of them were in residence that it didn’t feel like a ghost town. Thanks, Unadilla KOA! 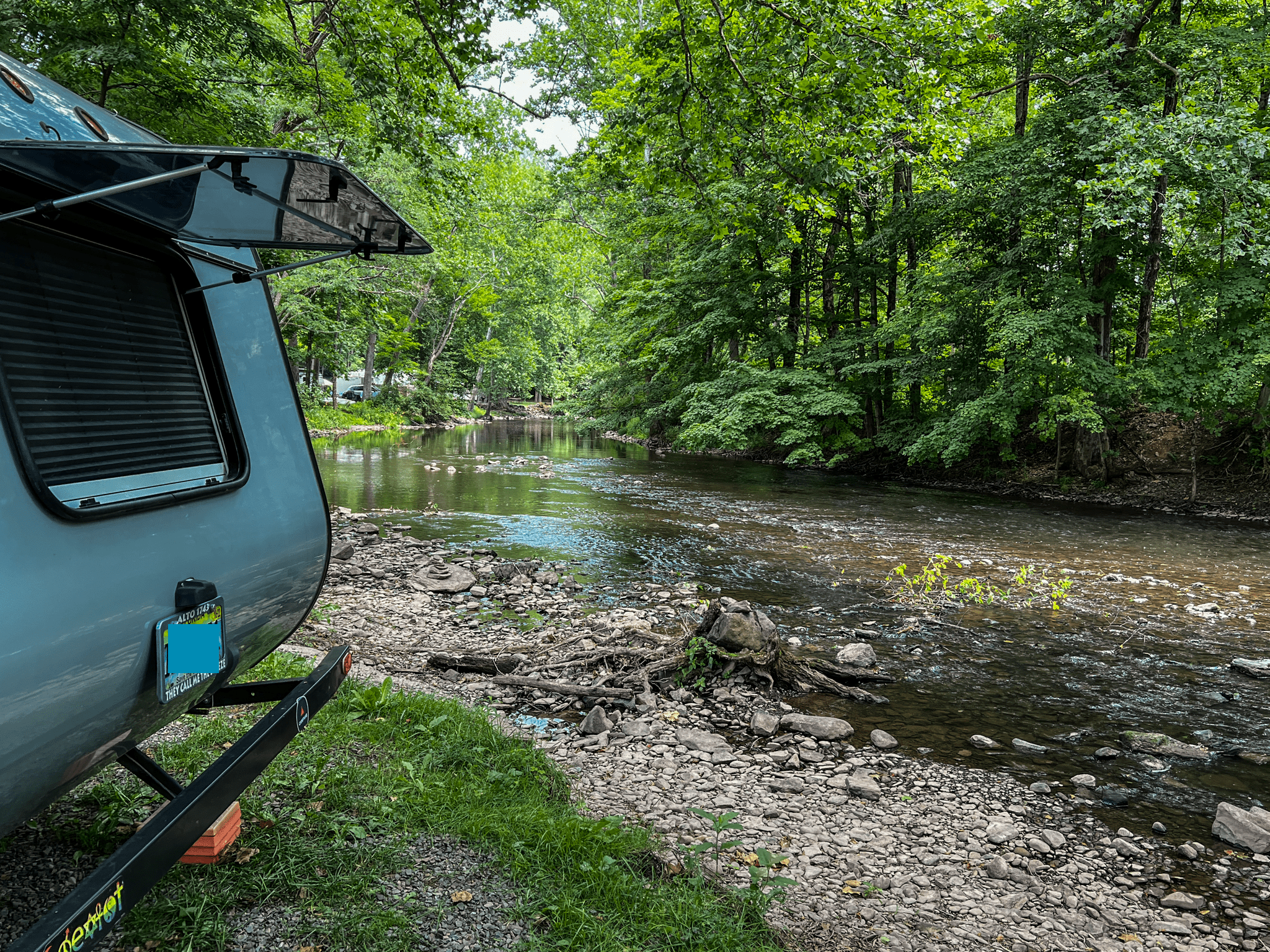 The best part about this place was that they tucked me into a small, shady spot, just big enough for an Alto, along the little burbling creek that marks the property line. Wow, was that spot sweet! Seriously, look at this view, my little Alto so, so close to the lovely sound of the water. It was awesome. I still kind of miss it!

Finally, late in July, I made it to the Hudson Valley, which always feels a bit like home even though I haven’t lived there since the mid-1980s. There’s something about seeing the Catskills and then the majestic Hudson River that always tugs at my heartstrings. I only had a week this time around and so I tried to make the most of it while also not driving too much, since I had somehow pulled a hip flexor and sitting in one position for hours was definitely not the best thing for it.

I visited Manitoga and caught up with my friends Gregg and Emma, which was great fun. I had not been hanging with friends since I left Indiana, so I was a bit starved for company and they were great companions on our Saturday adventure.

In between outings, I was trying to beat the heat at my campsite. I used aluminet cloth on side and back, which helped a lot. And I tried a new trick, using a triangular shade cloth I had picked up at a craft store for $10 a month or so ago. I was able to get it up and over about 2/3 of the solar panels (those hot black things glued to the Alto roof) and I think it did help cool things down a bit, although I didn’t measure with my meat thermometer to get actual data. Over the winter, I might cut off the triangle that draped down the big front window, as it’s not very useful considering the Magneshade cover is doing all the heavy heat protection there. It also looks weird from the inside looking out to see that triangle.

The next Wednesday, I spent the afternoon hanging out with one of my oldest NY friends, JAM, who used to let me crash on the couch in her Manhattan apartment back in our mutual sailing days. We had an outdoor lunch and then wandered the main street of Hudson, with me being constantly amazed by the transformation over the last few decades from sleepy town with dusty antique stores to hip, happening sidewalk bistros and upscale/pricey boutiques. Ah, progress.

And then it was time for my Clearwater sail, bringing my week in the valley to a magnificent close. I need to stay longer next time and try to see more people. Schodack is nice, but it’s far from the mid-Hudson towns where people I know live, which makes for long drives. The big upside of Schodack, though, is (a) electric hookups and (b) sunsets like this one.

As I crossed the state line into the People’s Republic of Massachusetts, I felt another lift in my heart. I called this state home for 12 years before I moved back to California at the end of 1999. (Yeah, if there was going to be a Y2K disaster, I might as well be in a hotel room in Silicon Valley, right? Which is exactly where I was on that day.) My first stop was in western Mass, in the area around Granville and Westfield, exploring places I’d not visited before. I had some great meetups with my old friend, Mike (we’re both old, but he is technically older than me), who was also one of my “retire early” inspirations several years back. 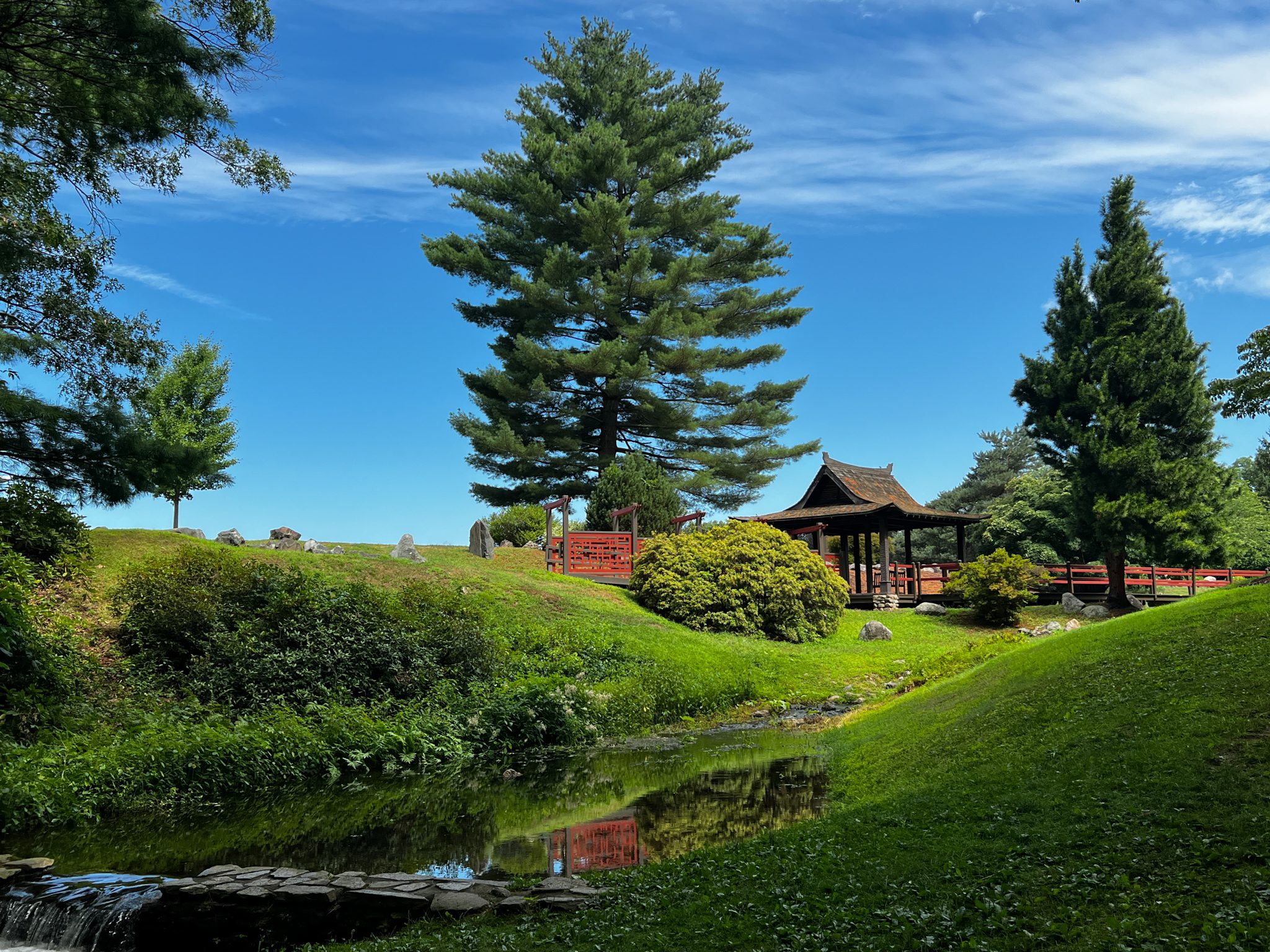 Mike is a car collector, and so we went cruising around town in his 1962 (I think that’s the year) Corvette convertible. (Don’t worry, you’ll see a lot of old cars in a coming post…) Sweet ride! Despite the heat and humidity, we took a stroll around Stanley Park, which is just beautiful. 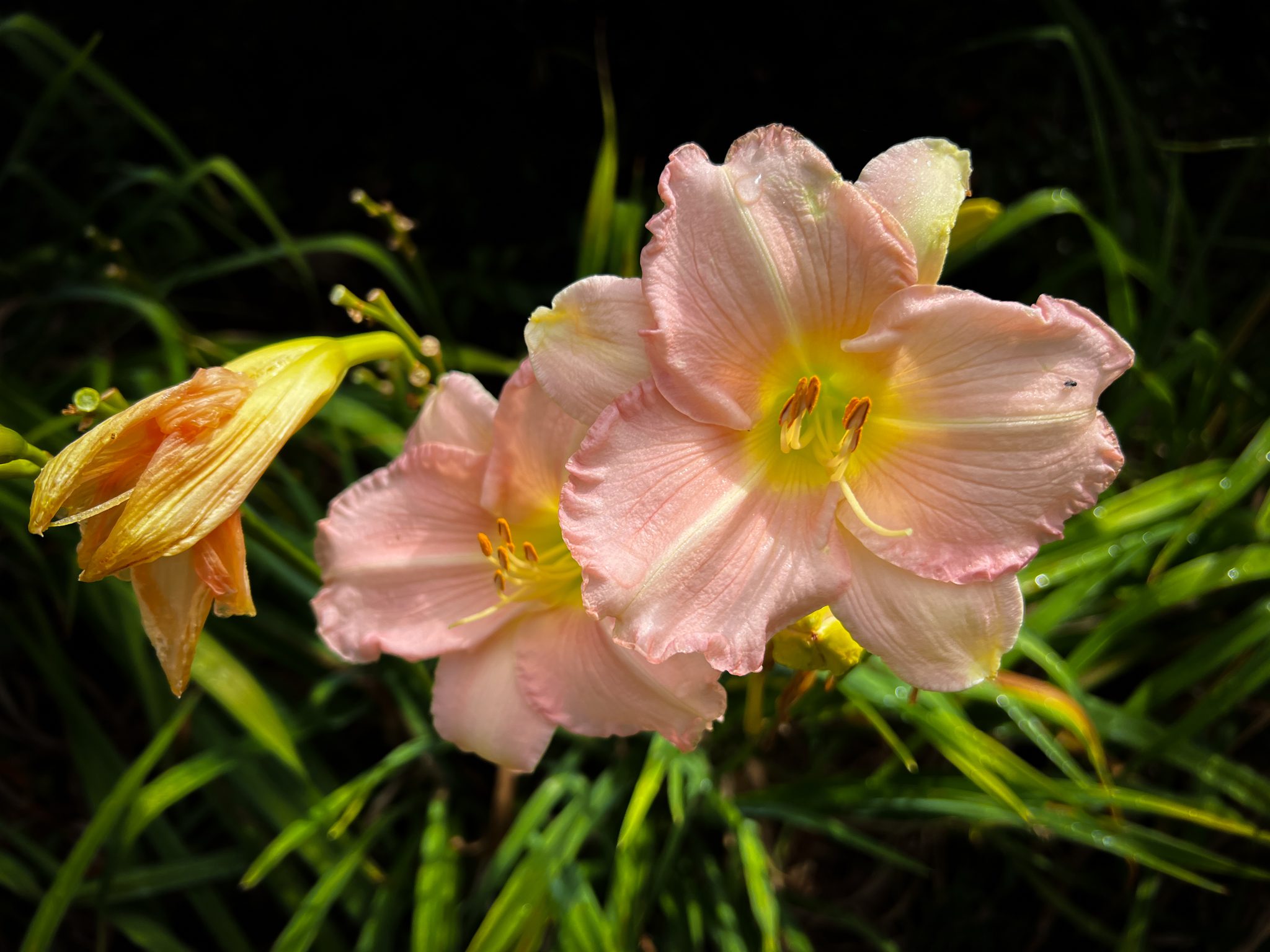 The gardens at Stanley Park had some day lilies still in bloom. So, Peg, my gardening friend, this is for you… (and yes, I did deadhead that one on the left, you have trained me well…)

You will never be completely at home again, because part of your heart will always be elsewhere. That is the price you pay for the richness of loving and knowing people in more than one place.