That might be the most misleading title ever. There is no perfect campsite. There’s only the campsite that fits what you want. So to start the process of picking a campsite, first figure out what you want. Or, as we say in project management, specify your requirements first and the rest is easy.

How big is your rig? If your trailer or RV is smaller, you can snag the smaller spots where a bus-sized RV can’t go. Sometimes those small spots are the last to go, so I can get a spot at the last minute. Some parks have a maximum length because of smaller loops or small sites, so big rigs are left out. This was the case at Chiricahua National Monument, where nothing over 29 feet was allowed due to the small size of the campground and the individual campsites.

What about power?  If you have solar panels and a battery, you can probably go a few nights without hookups. On the other hand, if you need the electricity to run special equipment or watch the big game, you’ll need hookups.

If you’re counting on solar power, then shade vs. full sun is a big deal. In places without hookups, I prefer partial shade and hope that I can place my trailer in enough sun to charge the panels and still have a bit of shade for sitting outside and catching a breeze. One reason I travel with a generator is because no hookups for 4-5 days + no sun or all shade = unhappy battery. I now look at site descriptions and see if they give any information about shade or sun.

Site type? Do you want privacy or a view? These two are often, but not always, mutually exclusive. At Jedediah Smith National and State Park, I had a great view, but my trailer was right on the loop turnaround, so if someone was coming down that road, they would come within 2 feet of my trailer’s side window, guaranteed.

Cost? Basically, this translates to “Do you want an RV park, a state park, or go boondocking?” RV parks have the most luxuries, like full hookups, and the often have laundry, free wifi and play areas for kids and dog runs for pups. You get what you pay for, and you usually pay a lot. In some areas, though, the state parks can cost as much as an RV park (I’m looking at you, California!) and you often don’t get hookups for that price. On the other hand, state parks usually offer bigger spots, with more space between them, whereas RV parks are all about maximizing the space to fit the most RVs (and ergo make more money) so you might be 4 feet from your neighbor’s big slide outs and you can hear their TV blaring at night if it’s warm and everyone has their windows open.

How about convenience? Do you want to be right in the city or “close enough” to run in for supplies? Some people love being close to the action, especially in areas with museums, zoos, and all that stuff. Other people like to be farther away and do a bit more driving. One is noisier, the other is quieter. One is more convenient, the other not so much. Figure out which one suits your style and go with it.

How much weather can you handle? Is your rig a 4-season deal or will you be freezing pipes and yourself if you try to go camping in 10F (-12C) weather? Some people winterize and go out in winter; others stow RVs until the warmth of Spring hits. So bottom line is know what you and your rig can handle and check the weather where you are thinking of camping.

Now you know the basics of what you want, you can start looking in the area where you want to go. Let’s say we want to find a spot somewhere around Santa Fe, New Mexico. 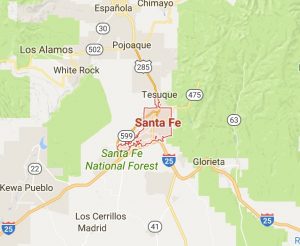 First, let’s check the weather. Since I am usually planning a month or more ahead, I mostly use historical weather information since long-range forecasts rarely go beyond 10 days (and if they do, they can be wildly wrong!). I am interested in trends over time when I’m planning ahead.

US Climate Data – This says April is average high of 65F (18C) and average low of 32F (0C). A bit on the nippy side for me, but I figure the month will warm up as it goes along. And just in case I was thinking to go earlier, I can see the average low in March is 26F (-3C), which is way too cold! And the average snow in April is zero, while March says 4 inches. I know which month sounds way better for my visit now (and it definitely isn’t March!).

Weather.Com – Looks like April last year had a couple of cold snaps (highs in 40s (4C), lows just below freezing), but otherwise highs in the 60s (16C or so) and lows in the mid to upper 30s (2C or so). Doable, especially if I have either enough propane or hookups. But just in case one of those cold snaps shows up, I will have a Plan B to get to better weather if needed.

So it looks like Santa Fe in April will work. Awesome! Now let’s find some places to camp.

First stop is the New Mexico State Parks website, to see if there’s anything nearby. So far I’ve found the campgrounds very well run, with hookup sites going for $14-15 a night, well within my budget.

Looks like there is one about 8 miles from town), so I dive into the website information. All the sites are walk-up until May 15, which probably means they don’t have enough demand to make them reservable that early in the season. I’ll keep this tab open in the browser and keep looking. At $14/night for electric/water hookups, it’s the cheapest deal in town. But only 7 of the 50 sites are hookups, so I move over to campsitephotos.com to see what the sites look like. They have thumbnails of the sites, so you can click and browse through them to get an idea of what the sites look like. 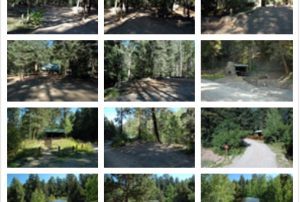 It is a forest so most of the sites are shady, meaning solar isn’t going to do so well and I’ll be running the generator by day 4 or 5. And if I need to run mine, you can bet other people will need to do the same, so there’s the risk of camping in generator-hell. Let’s keep looking…

Maybe there are some regional and city parks. Some areas, like Maricopa County (Phoenix, AZ) and Sonoma County (CA) have great regional campgrounds. Looks like a strikeout here, though, both for Santa Fe county and the city.

Recreation.gov is the next stop. Nothing near Santa Fe that’s open for reservations in April. The nearest place with room is close to Los Alamos, but they want $35/night with no hookups. Pricey *and* not that convenient so I’ll keep looking.

On to campendium.com, which crowd-sources locations and reviews. There’s a promising RV park with good reviews. Price seems high, $46/night, although the weekly rate includes a free night, so the cost would be $276 (down from $322). It does include water/electric and promises free wifi, with a whole detailed page devoted to their redundant system (which is impressive, I’ve never seen such nerdy stuff on an RV website).

There’s another RV park a bit farther down the road, $33 a night, with the same 7th night free for a weekly rate, so that brings the cost down to $198. This one says wooded and open sites, so there might be some privacy available, and not a big parking lot of RVs. 7 miles southeast of Santa Fe, and the directions say to use GPS coordinates, which I’ve found to be a pretty reliable indicator that they’re hard to find and so less likely to be crowded.

Unfortunately no one has reviewed this park on Campendium, so I’ll go in two different directions here, starting from the same place: Google Maps. I switch to satellite view and see if I can scope out the campsites as far as space goes. Definitely looks like there are wooded sites, so score one for privacy. 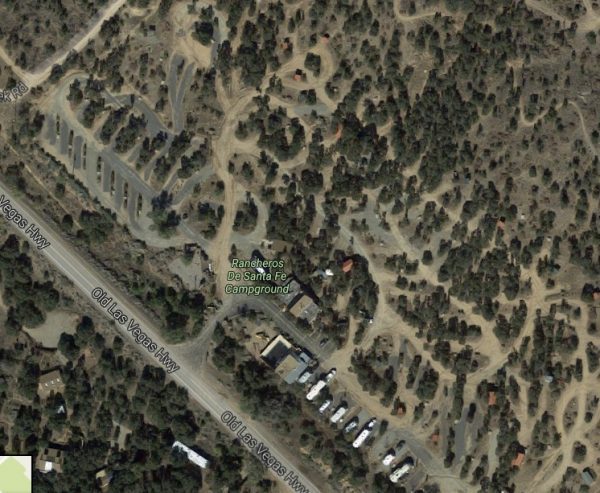 Since we’re already on Google Maps, let’s check the reviews; it’s a handy little feature. I scroll through them, and it’s kind of a mixed bag, leaning towards the positive. I usually throw out the highest and lowest reviews, and pay attention to the rest as a group.

There’s also a KOA down the road from that second place, and with my KOA card, it would run me about $240 for the week for a water/electric site. Wow, didn’t expect that low a price, they are usually a bit higher than other RV parks. Their reviews are about the same as the second site. The google maps check shows a small KOA with decently spaced sites and some bushes or trees between so better than your average RV park.

Making the Decision… or Not

Now I have four possibilities and I matrix them out like this:

Clearly, if I’m going for budget, I’ll pick the state park. I also happen to love the state parks, and the only bummer is that it’s non-reservable this early in the season. I kind of hate the uncertainty of walk-up sites. Listen to the description: “surrounded by the Santa Fe National Forest.” Oh, that is so hard to resist. Especially when compared to an RV park like this (one that obviously didn’t make the short list):

What to do? Well, nothing yet. I’ll talk it over with my traveling buddy next week, since she wants to do Santa Fe as well. If we go for the state park, we’ll have the others as backup options, because it’s always good to have a Plan B. And one last note, getting to the campground earlier in the day means a better shot at any open sites, so we’ll have to be up with the sun and on the road shortly thereafter from Albuquerque, something to remember on the day or, better yet, the night before.

Suggestions? Comments? How do you pick your perfect campsite?