After welcoming me with a fierce bout of weather, Oklahoma actually ended up being kind of fun to visit. Lots of wide open country, interesting museums, and, surprisingly, a bit of the South. Read on for my report…

Driving across Oklahoma, I spent as many miles as possible on Route 66, and was rewarded with slices of life in small towns and rural communities. Two of the photos I took echoed each other, buildings just 37 miles apart from each other, each on Route 152, between Amarillo to the west and Oklahoma City to the east.

A little googling reveals that both were designed by Solomon Andrew Layton, who was one of the most significant architects in Oklahoma at the beginning of the 20th century (which begs the question “how many significant architects *were* there in Oklahoma in the early 20th century?). Washita’s courthouse was built in 1910, and Beckham’s in 1911. The latter building made an appearance in the movie Grapes of Wrath,

The Beckham County Courthouse, located in the city of Sayre, appeared the the Grapes of Wrath movie. So I can legit say I spotted a movie star, right? 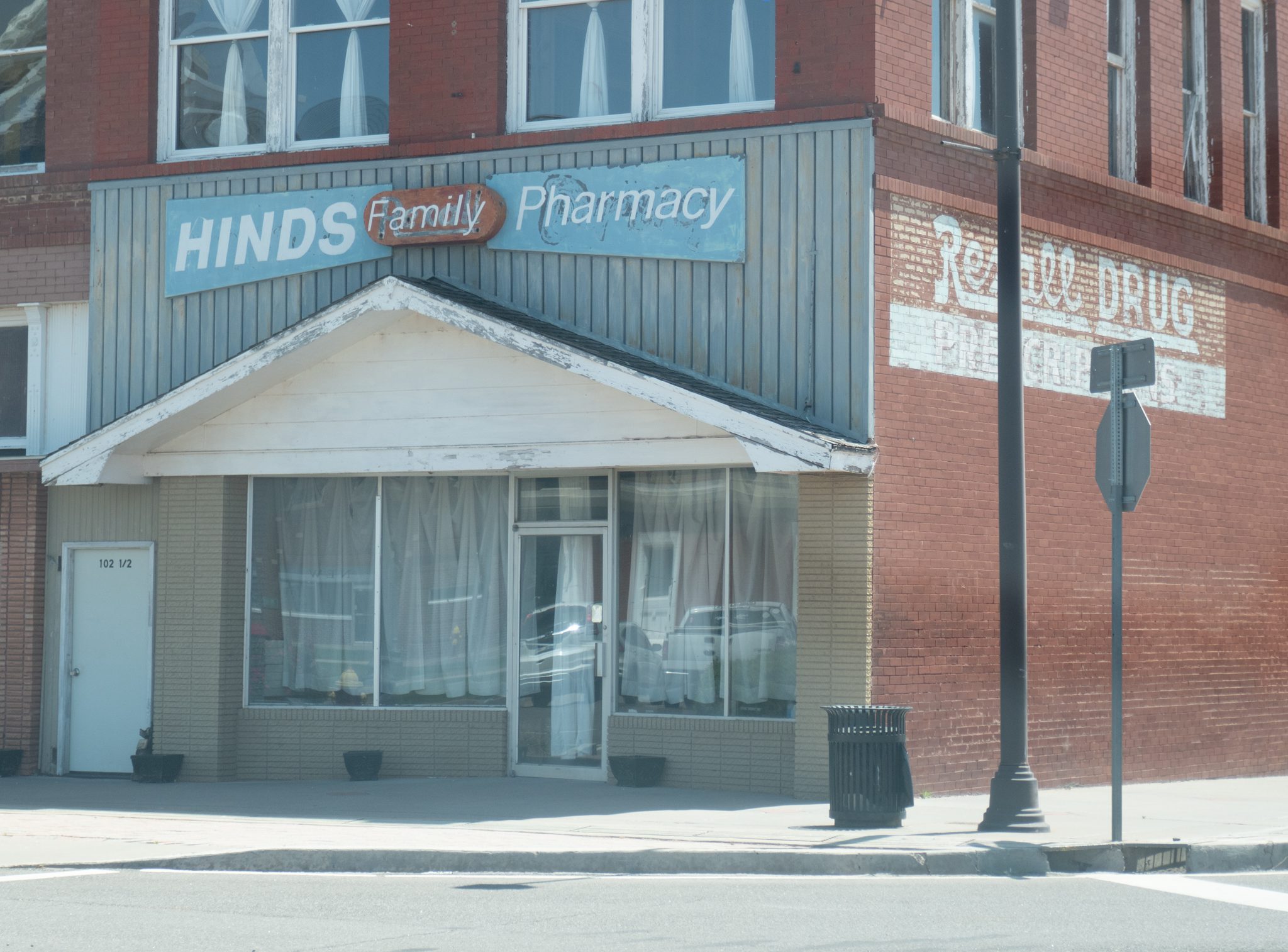 As with many of the small towns I’ve passed through in rural America, the old stores have closed as the plethora of dollar stores and Walmarts have moved in. This was one of three Rexall Drugs I saw that didn’t survive; this one was in New Cordell, OK, just across the street from that fancy courthouse building.

My great-great-grandfather’s family may or may not have participated in one of the Oklahoma land rush that “redistributed” Cheyenne and Arapaho land to white people. What I do know is that in 1887, the family was in Clay County, Kansas, and by 1900, they were in Watonga, Blaine County, Oklahoma, which is the right side of that green area denoting the land included in the third land rush of 1891. 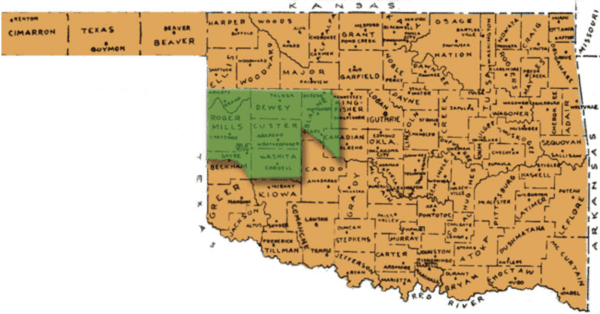 I found a transcribed oral history that said they “probably homesteaded the ground, where they developed a successful farm and cattle ranch for about 25 years. The history goes on to say that “about 1915 they retired and sold the ranch.” Hmm… 1891 + 25 years = 1916. Close enough, especially with all the “about” mentions in that oral history. Which is what brought me to Oklahoma in the first place, to see Watonga, where that branch of the Wynns came from that eventually produced my mother and then me. 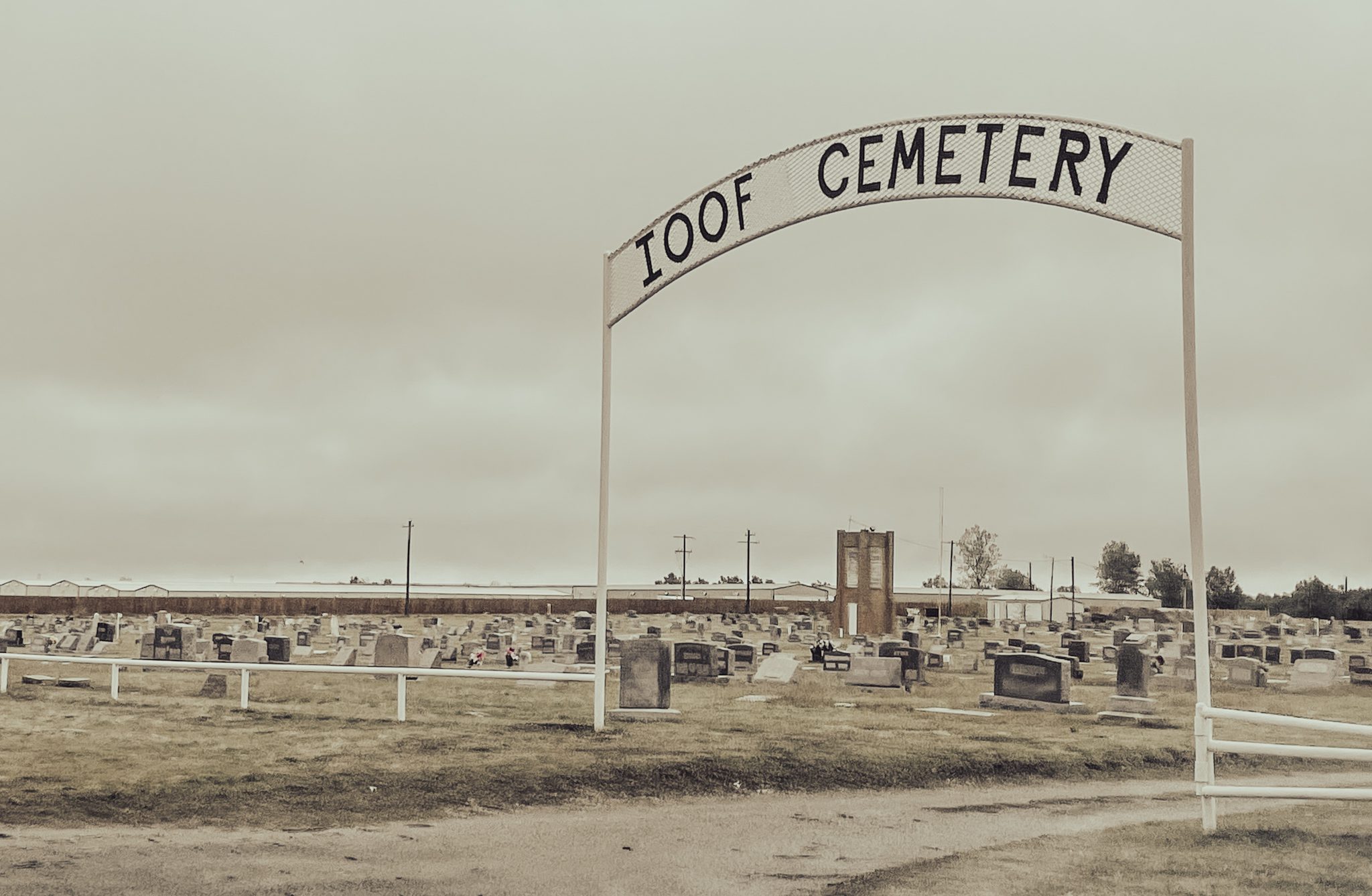 William Jackson Wynn, and his wife, Julia, are buried in the IOOF cemetery in Watonga. There’s no map, no one to ask, so I just walked the rows of graves, trying to start with the earliest sections, but found that old and new are intermixed, mostly to use the land better, I guess. After 45 minutes of slow walking I found their headstones, side by side. Suddenly, I was standing in front of the only physical evidence I’d ever seen that these two ancestors of mine actually existed. It’s hard to describe how that feels. I never knew much about the Wynn side of my family; no stories or tall tales, no heirlooms or hand-me-downs came from them. I have a few photos of my great-grandparents that my mother had, but nothing beyond that. That branch of the Wynns didn’t leave much behind. 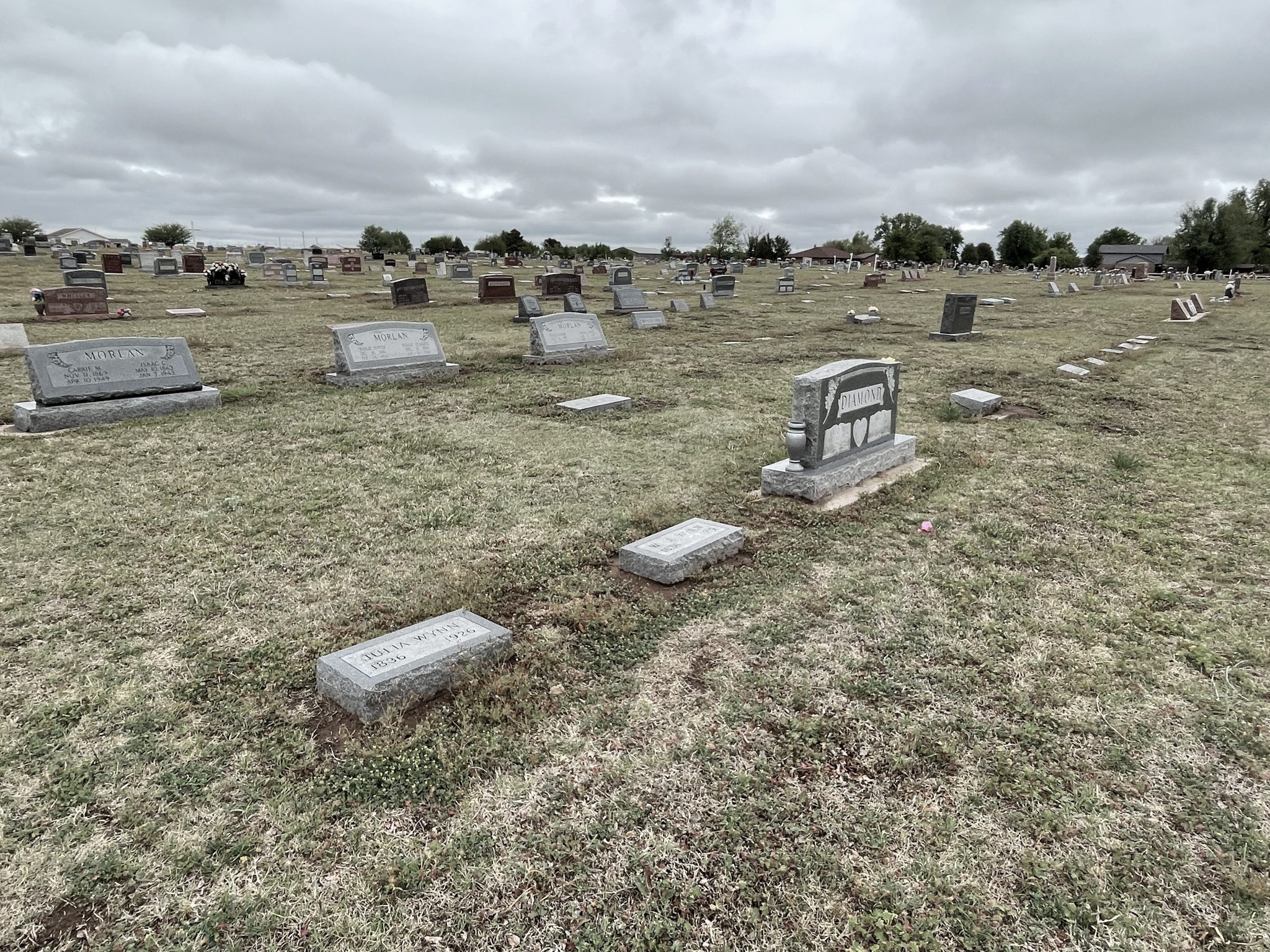 On the other side of that Diamond headstone is the grave of their grandson, James Cameron Wynn, who died at the young age of 16 1919, probably of the Spanish Flu like so many others. William died in 1919, too, which been either old age (83!) or the Spanish Flu. James was the next younger brother of my grandfather, William Morgan Wynn, three years older.

How William Morgan moved from Oklahoma in 1922 to marry a woman in Whatcom County, Washington in 1931 may remain a mystery I can’t unravel, as everyone who would have know that has passed on by now. I’m glad he did though, because that’s how I got here, That woman was my grandmother, and their only child was my mother, Margaret Wynn. I will never know the details of the Wynn side but seeing these three graves, the town of Watonga, and the surrounding farmland gave me a sense of them I didn’t have before, so it was worth the trip. (Yes, it was even worth the three days of one tornado watch and the three severe thunderstorm warnings!)

I had to learn to read gas pumps differently in Oklahoma (which, as it turns out, also applies in parts of Arkansas). The fourth choice isn’t diesel, it’s 100% gasoline, no ethanol. And it’s even more expensive than regular gas, like about 50 cents more! I don’t know why the three higher priced gas offerings have no ethanol. Maybe someone out there can enlighten me. (Also, it’s not Biden making gas prices go sky high, it’s the oil companies like Shell, who reported record profits in Q1 2022. But I digress…) 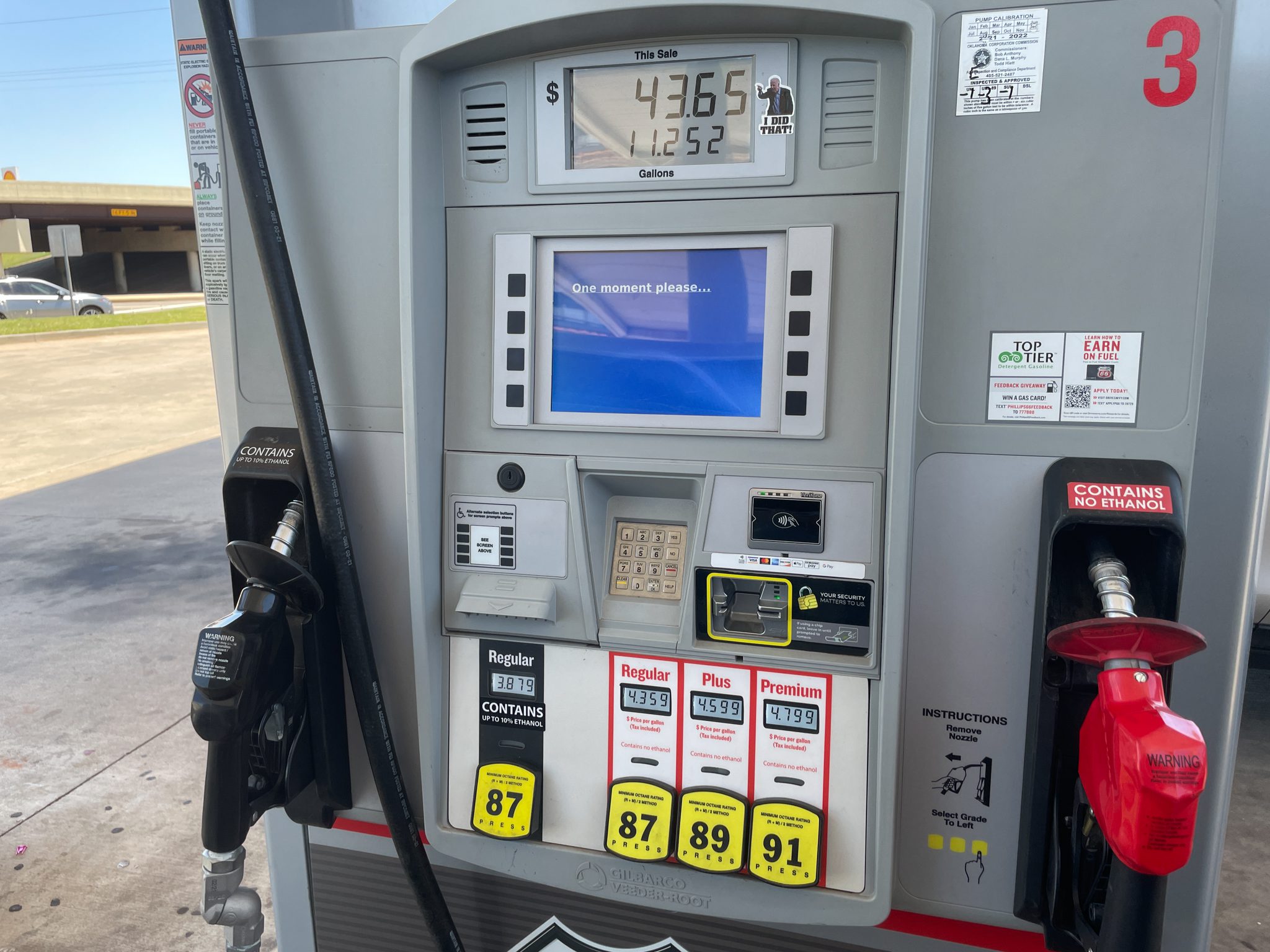 Driving the backroads was pretty entertaining. Slow down or you’ll miss the site of the first oil wells in Oklahoma, where someone has erected a sign and a fence to keep people out. There’s enough room to pull over and take a photo but no selfies, people. 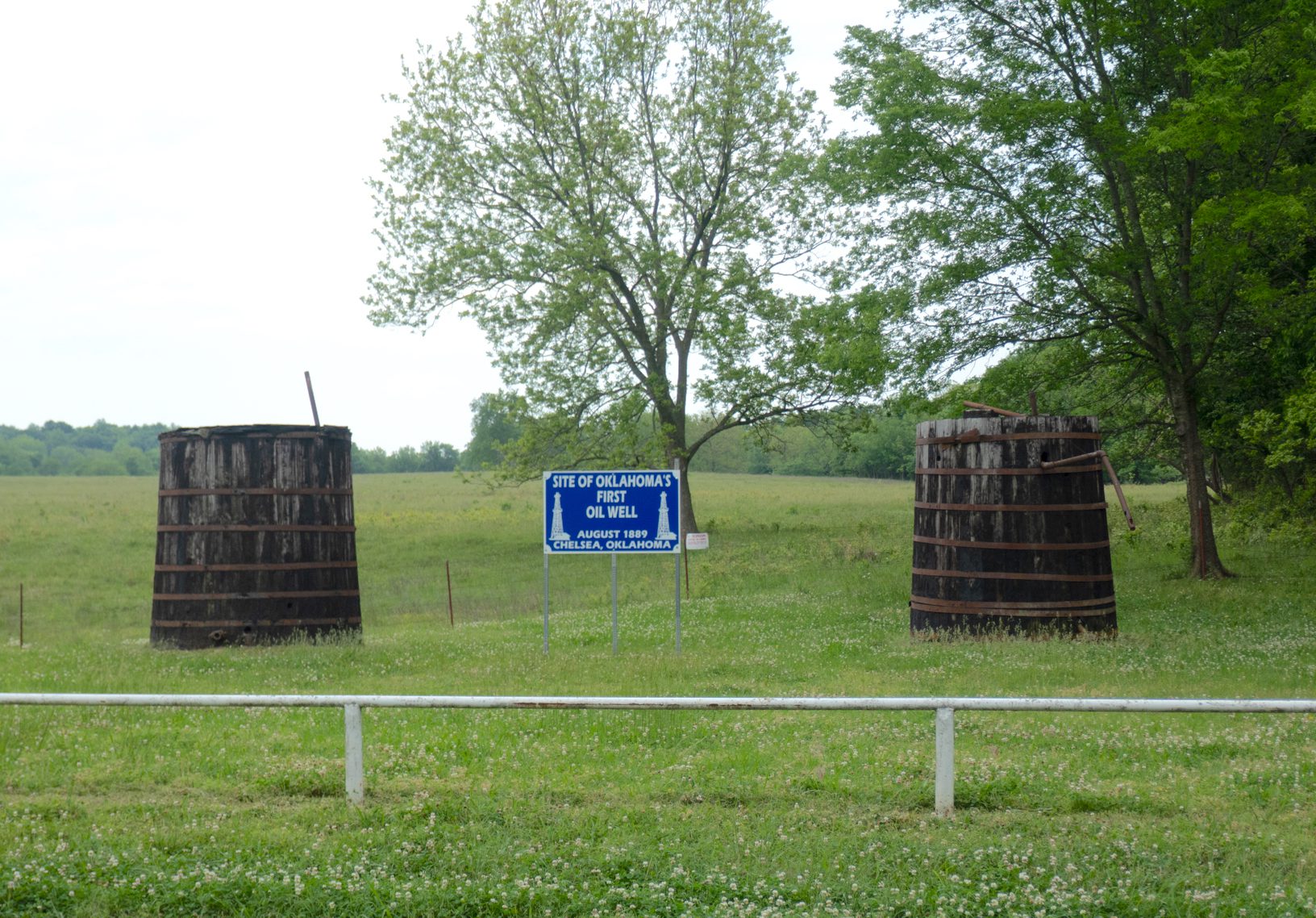 Farther down the backroads on my way to Bartlesville and Price Tower, I spotted the Winganon Concrete Space Capsule. This thing is so famous it’s on Google Maps and it has its own Facebook page. I slowed down long enough to take a quick photo because there was no place to pull over. There’s also no traffic, so slowing down or stopping isn’t such a big deal. It’s kind of sweet that at some point, a concrete truck lost its load and then someone decided to paint it as something more fanciful, more than once as it turns out. Well done to whoever has come up with ideas and executed them, especially the current space capsule incarnation. 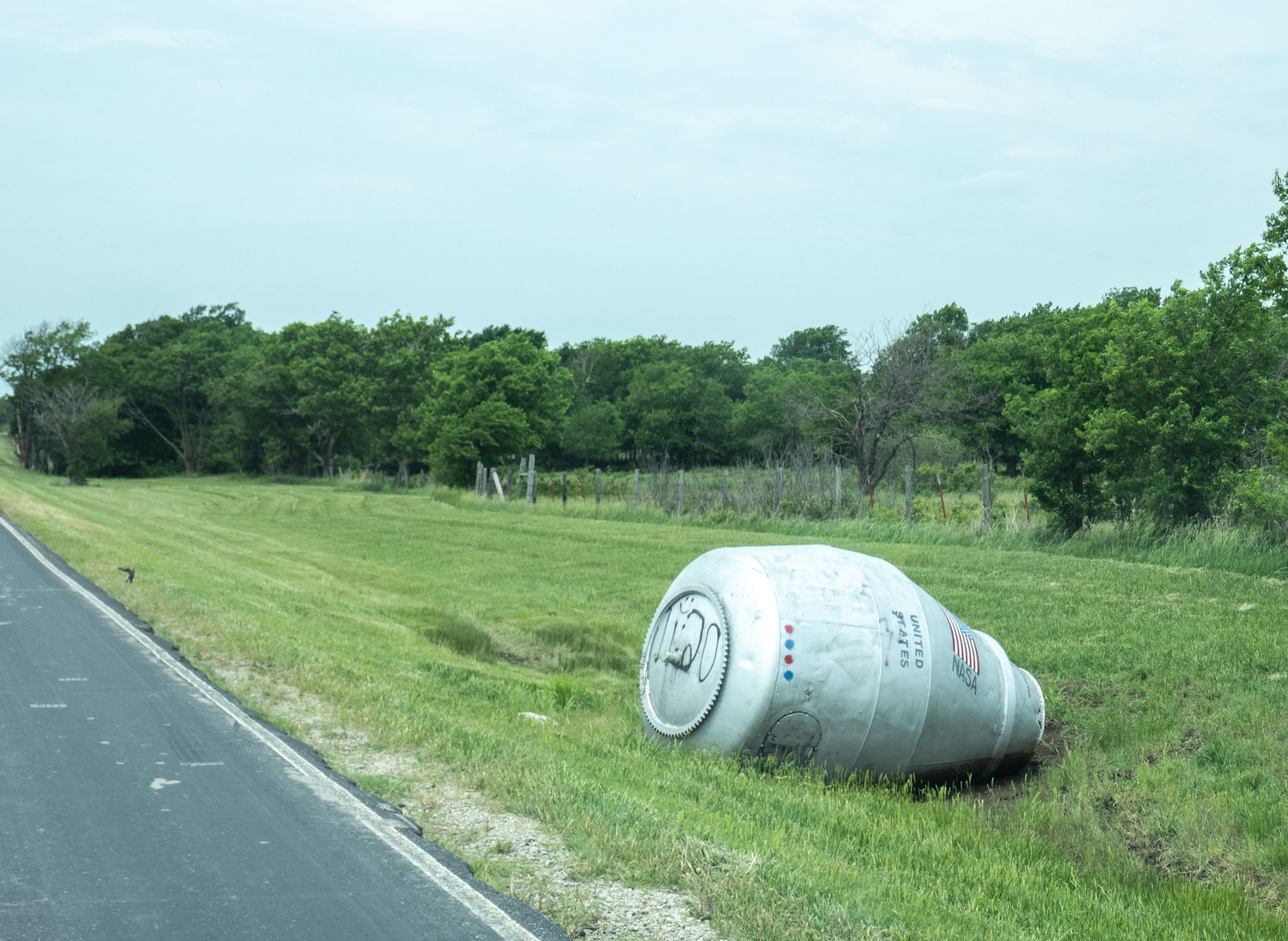 After the weather of Watonga and the heat and wind of Oklahoma City, it was a surprise to get to eastern Oklahoma and suddenly find myself back in the South. Humidity, lush green, poison ivy, Virginia creeper, and bugs. Lots and lots of bugs. And pontoon boats. I think I was the only campsite on the weekend that didn’t have either a pontoon boat or an empty boat trailer parked by my camper. I felt like I should take out the kayak and set it up but then that might be considered just pathetic compared to the size of the other boats. So I waited till mid-week, when the campsite and boat launch had calmed down considerably before I took myself out for a paddle. Nice lake, although every time I see a long dark thing sticking up out of the water, I still think it might be a gator. That’s what kayaking in Florida does to you. 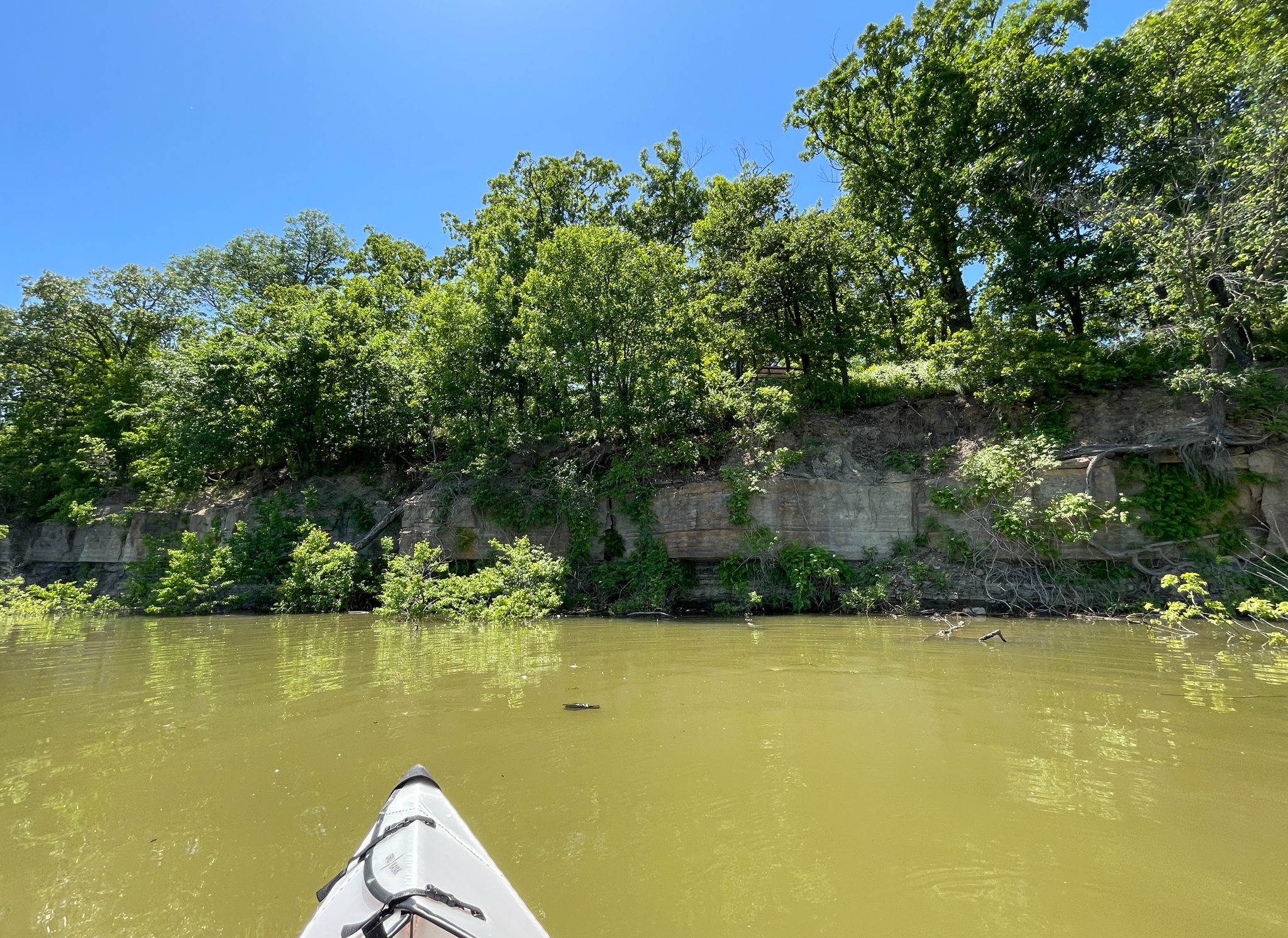 My lakeside site had beautiful sunset views and I took full advantage of them every evening. Like most Army Corps of Engineers (USACE) sites, this one had big sites, solid electric, and ya can’t beat lakefront. The very top photo in this post is my site at sunset. See what I mean?! 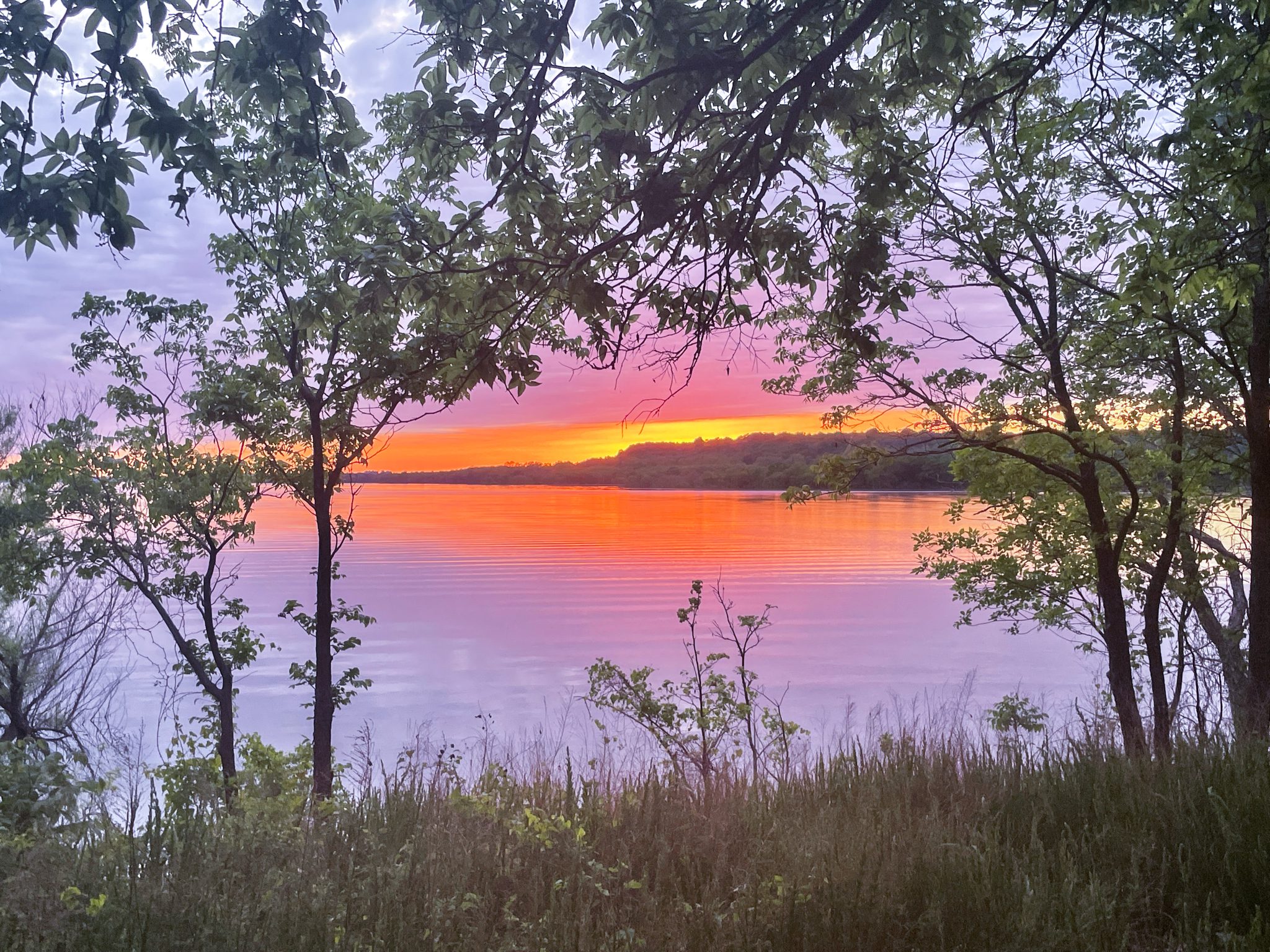 From here, I’m heading to Arkansas, another “first” for me. Never been there either, with or without a trailer in tow.

We don’t have milk cows. People have so many stereotypes of people from where I come from – Oklahoma. We don’t ride around in covered wagons, either.