By chance as I was traveling last month, a few people mentioned the new Bob Dylan Center that was opening in Tulsa Oklahoma in mid-May. Much to my surprise, it was already open by the time I was near Tulsa *and* I could score a Sunday afternoon ticket. So let’s see what’s up with the Dylan archives… 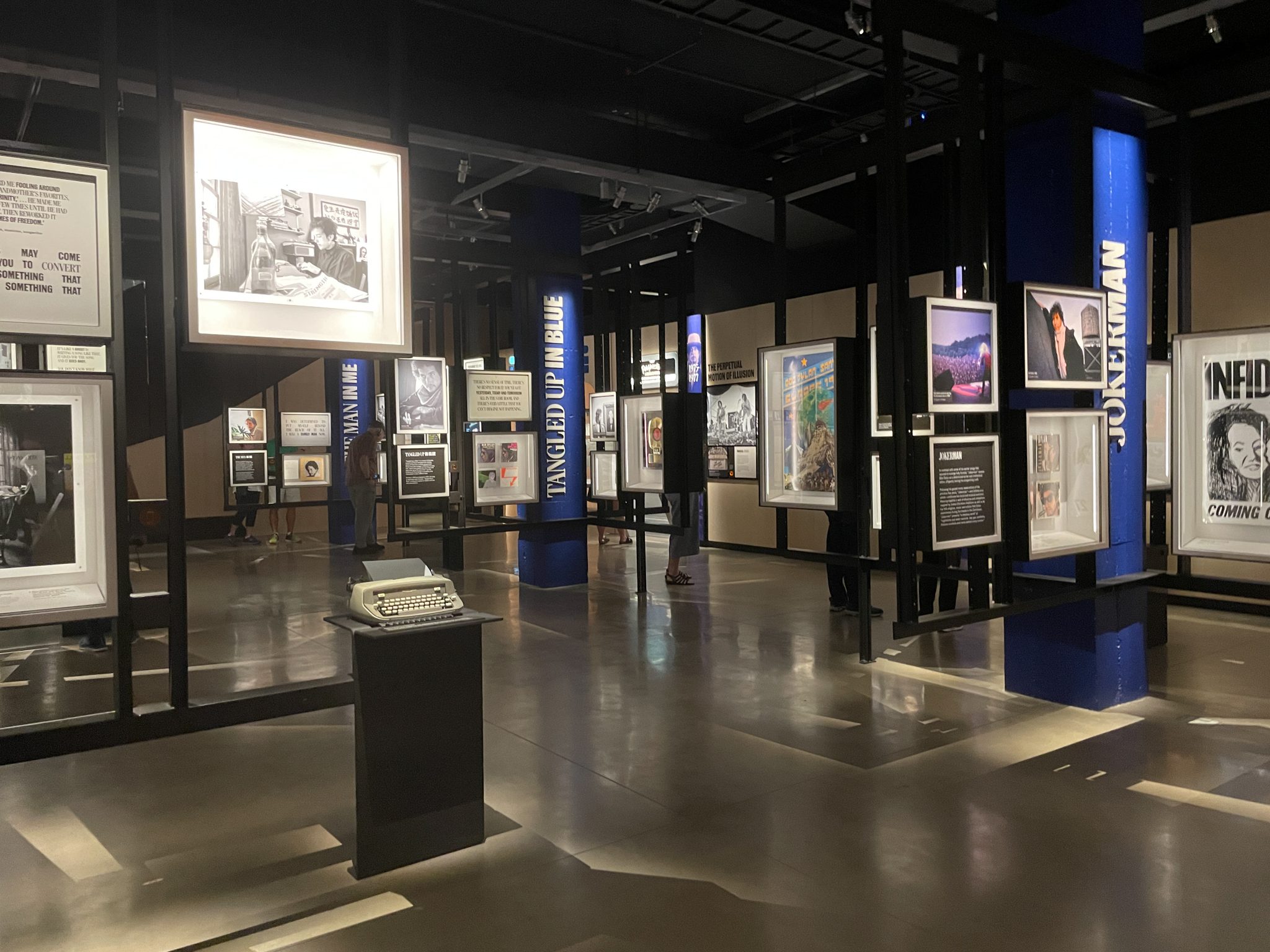 Yes, this is one of Dylan’s actual typewriters, as you can tell by the information panel just below it. Seeing the instrument that helped bring songs such as “Like a Rolling Stone” to life was pretty cool. 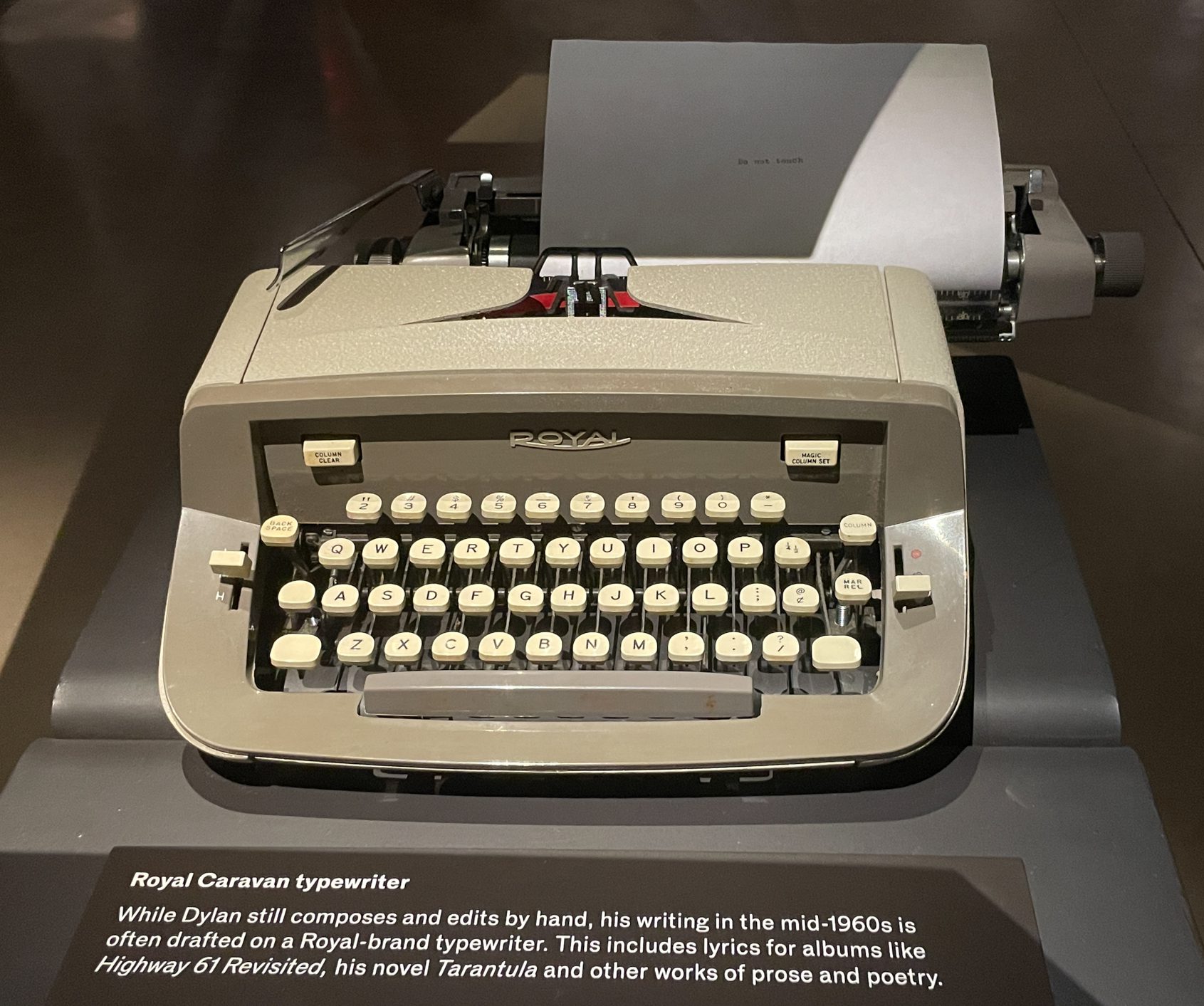 The technological innovation here is what’s amazing, to be completely honest. Yeah, the exhibits are well-done and the topics fascinating if you’re a Dylan fan. But it’s the headphones and specialized iPhone device they hand out at the entrance that made the experience so immersive. Each exhibit or area has an orange circle lit up and all you do is bring your device close to it and it starts playing. You get a song, or a speech, or a memory relevant to the area you’re in. And if you wander away from that area, it doesn’t matter. It will end eventually, or you can tap into a new circle and pick up a new clip.

This translates to a completely personal experience, where the visitor designs the soundtrack as they go, in whatever order they want. And if you want to listen to Tangled Up in Blue eight times in a row, you can do that (yes, I did that). You don’t have someone in your ears telling you to “pause until you get to station 16” and you can’t hear the people around you talking or droning on about that time they saw Bob in concert in whatever town. I got lost inside of Dylan’s stories, songs, and art for more than an hour and never noticed anyone else unless they literally walked in front of me. Kudos and more kudos to the Mark Davidson, the curator and director, and the team that designed this system, it’s freaking brilliant. (I forgot to ask if you could connect their device to your bluetooth hearing aids, but I bet you can…) 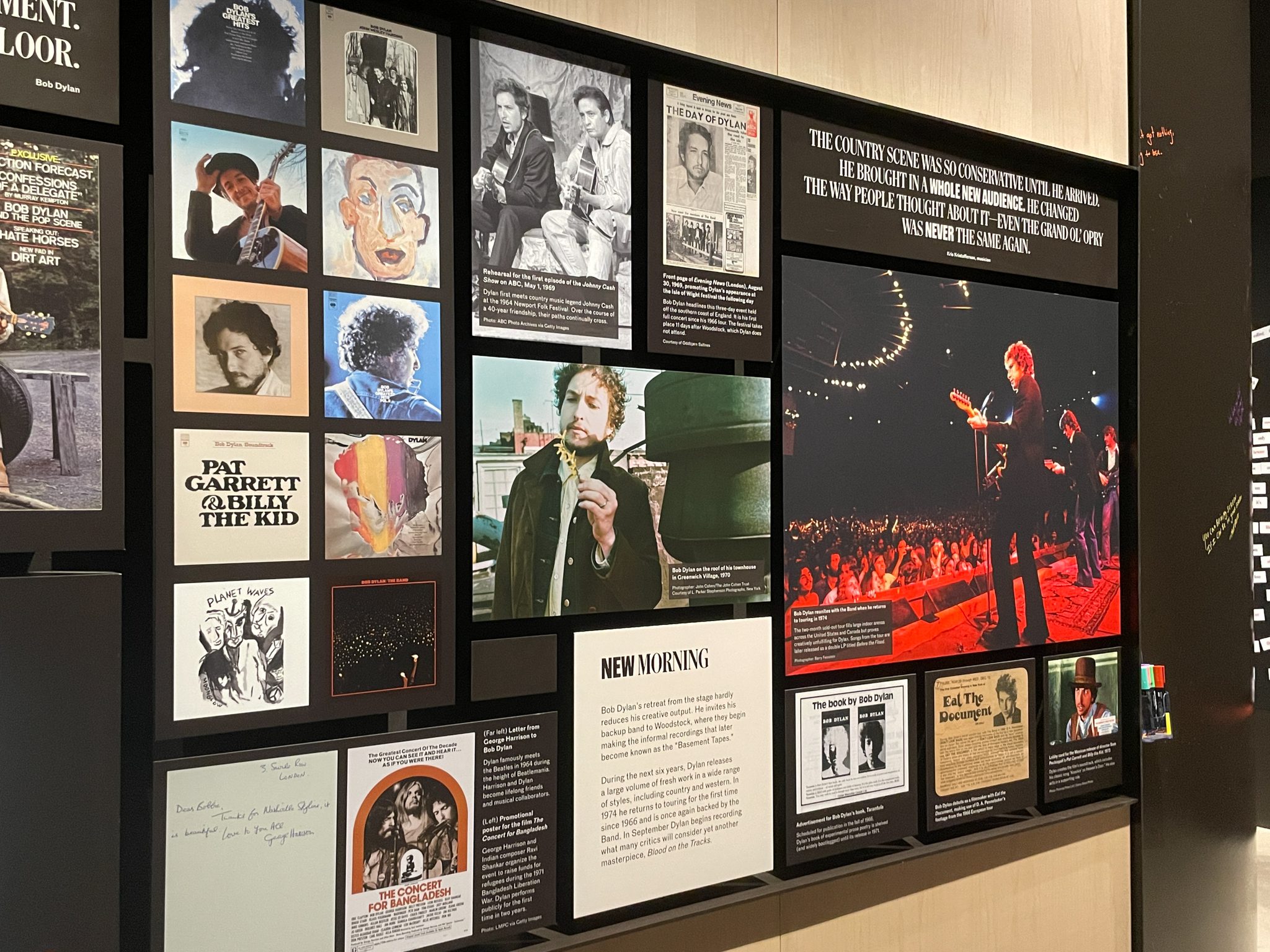 The exhibits are in roughly chronological order but if you wander around, it really doesn’t matter. I know that Tangled Up in Blue came well after Nashville Skyline, for example. Each section is lovingly curated, with insider tales, sketches, or photos you’ve probably never seen before. 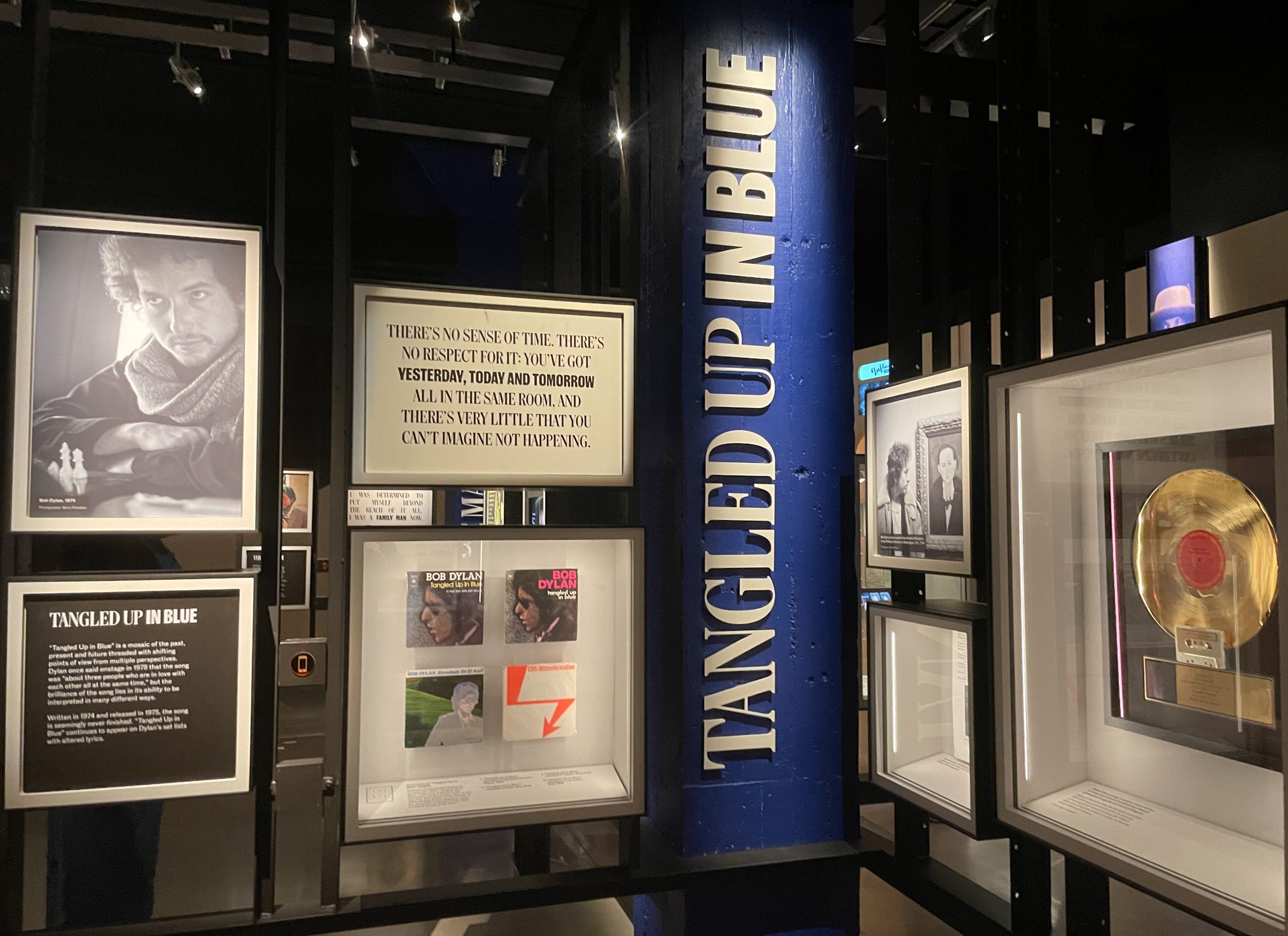 Like this little pocket notebook, one of three that Dylan used to write notes, lyrics, and whatever else he needed to record in the creation of the Blood on the Track album. I was fascinated by each of them. Such tiny printing, such dense text. Bob definitely knew how to use all of a small notebook page. 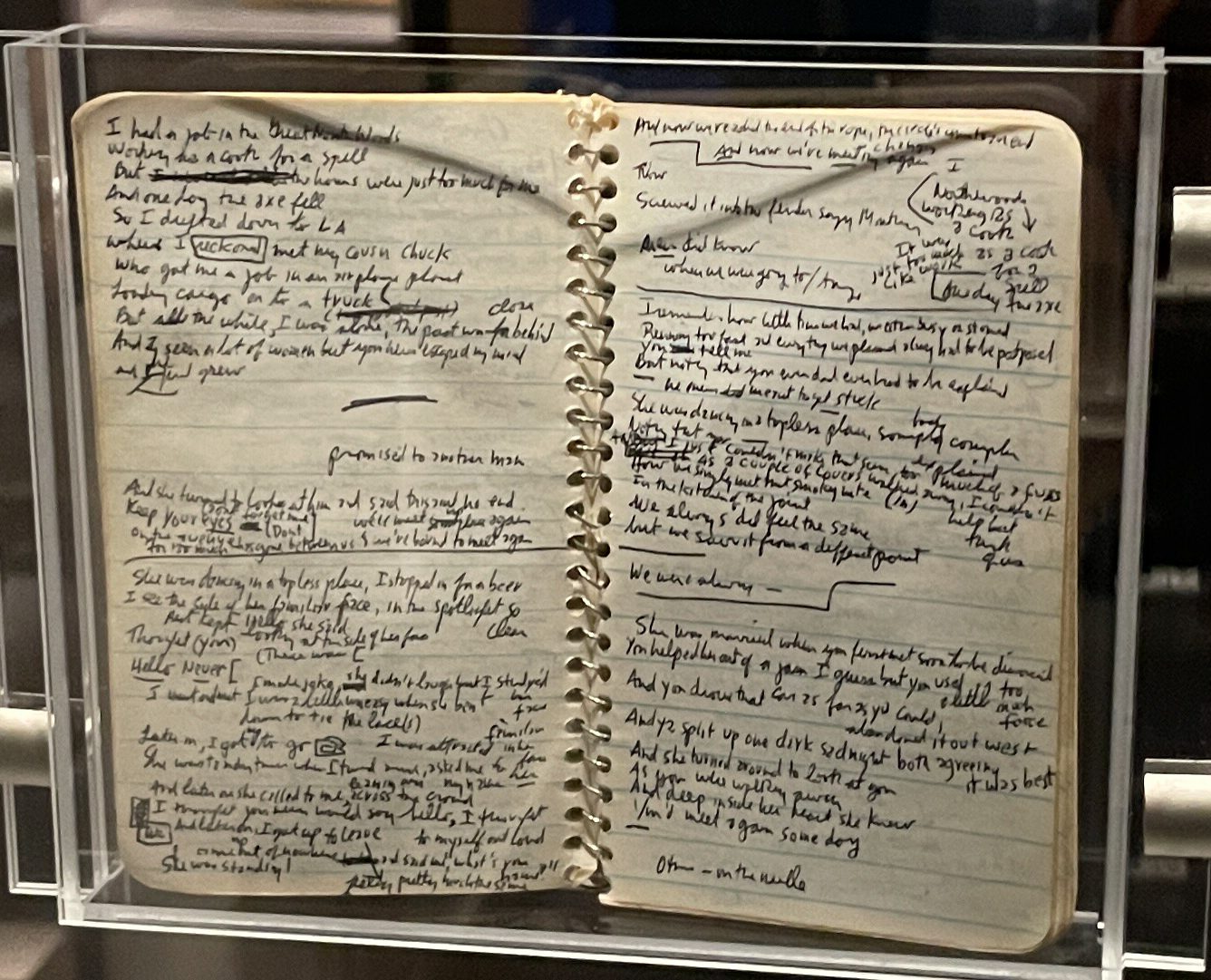 Upstairs, there’s a visiting exhibition space, which was showcasing art by someone vaguely associated with Dylan, but I didn’t really cotton to it. The other side of the floor is planned as a changing exhibit of some of the interesting memorabilia in the Bob Dylan collection. My hands-down favorite was this tambourine that inspired one of my favorite Dylan songs, Mr. Tambourine Man.

I don’t have my high school yearbook any more, but I’m pretty sure my senior quotation was this little-known lyric from that song (The Byrds only recorded one verse, silly band):

Yes, to dance beneath the diamond sky
With one hand waving free
Silhouetted by the sea
Circled by the circus sands
With all memory and fate
Driven deep beneath the waves
Let me forget about today until tomorrow 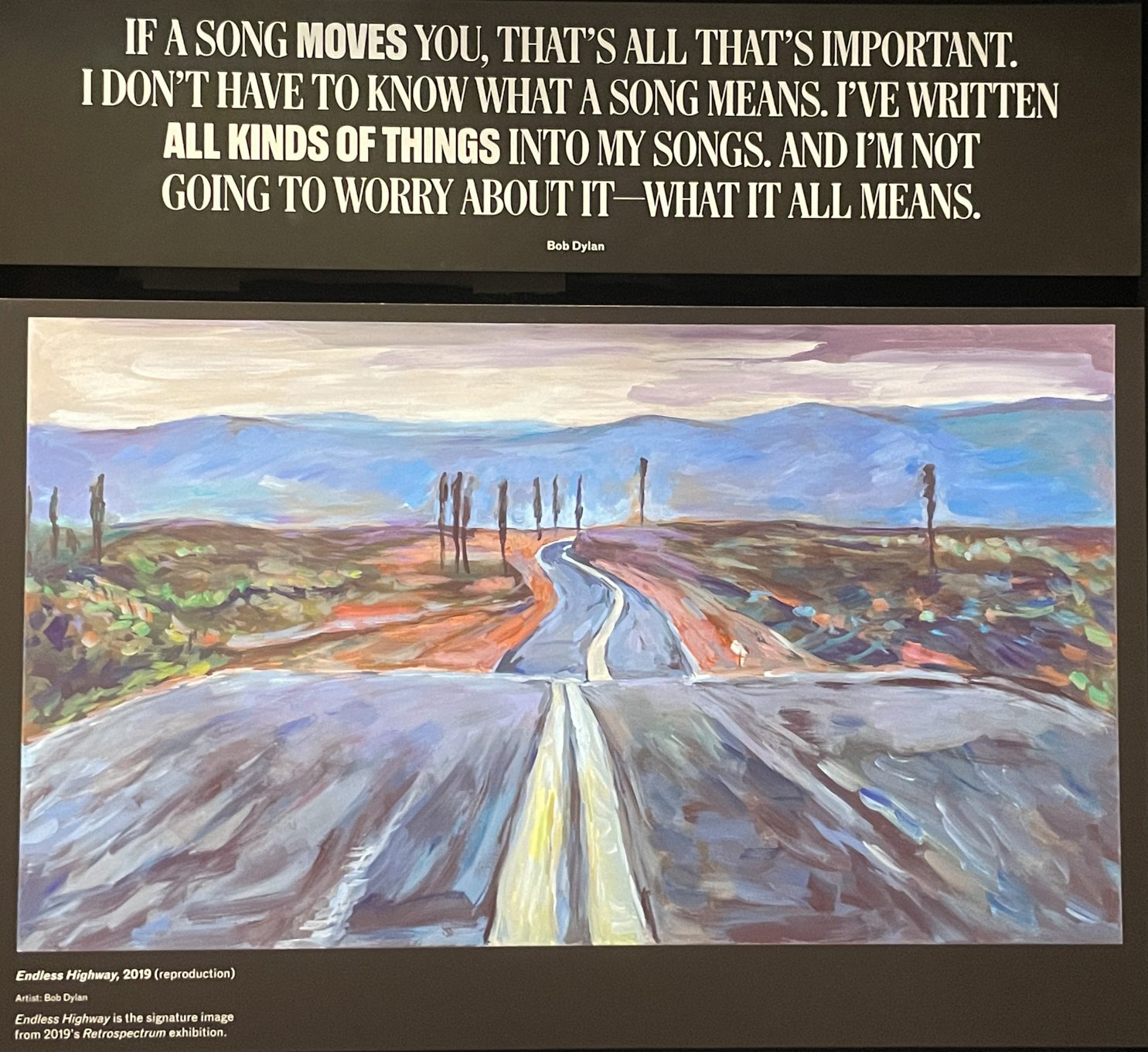 To close out this post, I’ll share the actual postcard that Pete Seeger wrote to Bob Dylan upon learning that people thought he was pissed off at Dylan going electric at the 1965 Newport Folk Festival. I love it. So Pete. 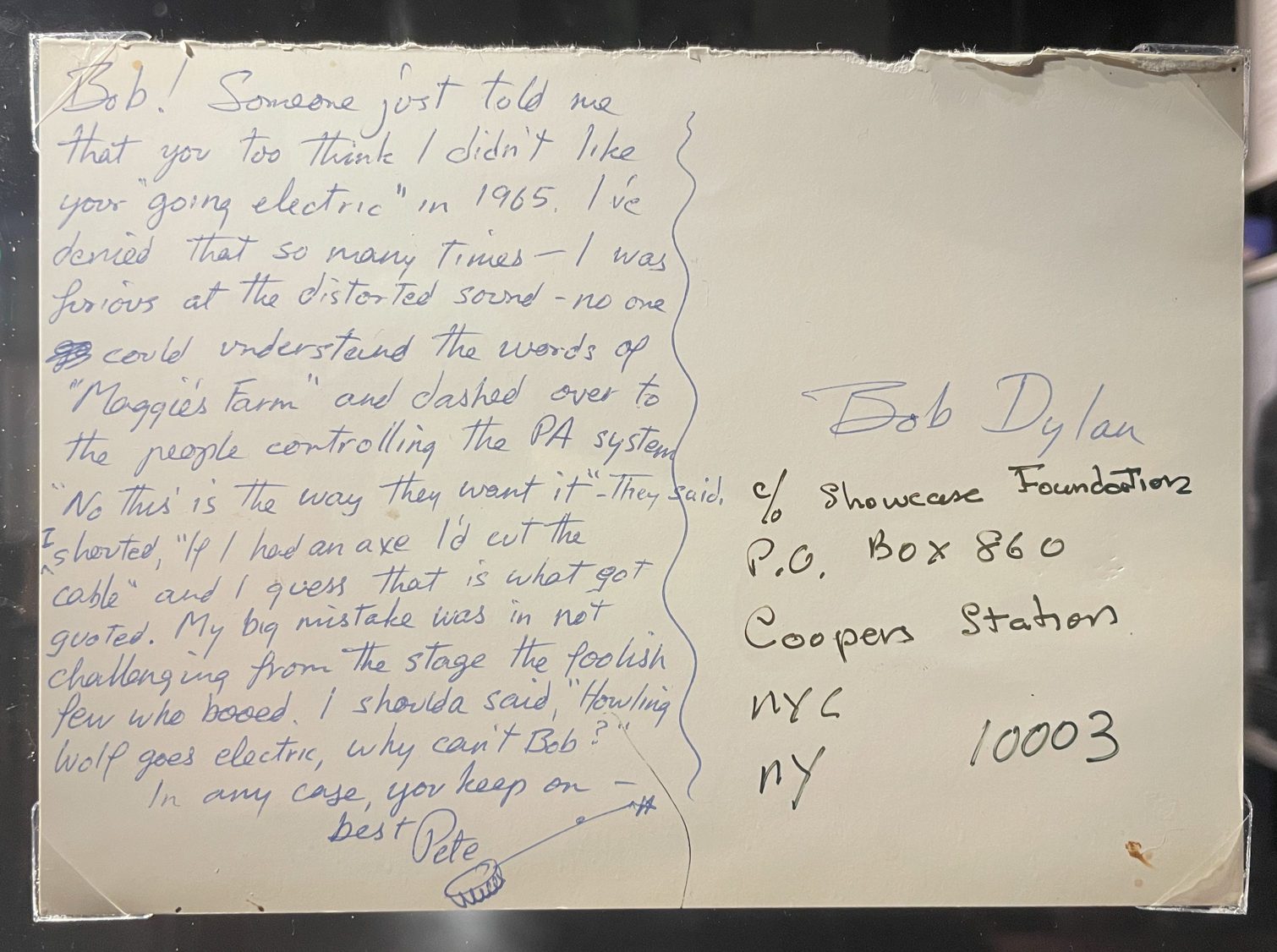 When asked why Tulsa, Bob answered: “There’s more vibrations on the coasts, for sure. But I’m from Minnesota and I like the casual hum of the heartland.”