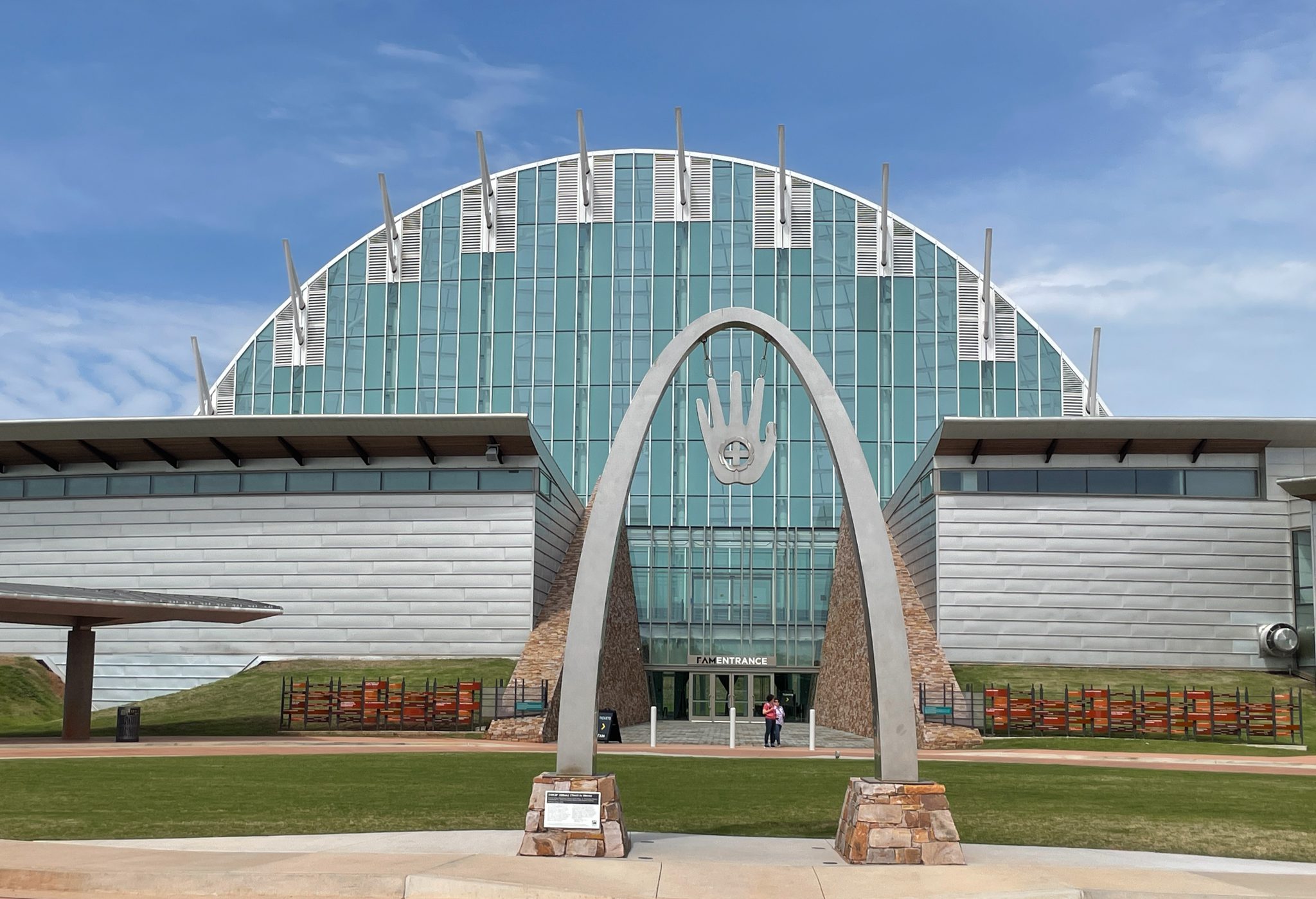 There are few museums that I can’t describe in a half-dozen photos and some text. This is one of those. It’s the first museum I’ve visited that documents and explains the treatment of the First Americans from their point of view, from initial encounters with outsiders to the present day. 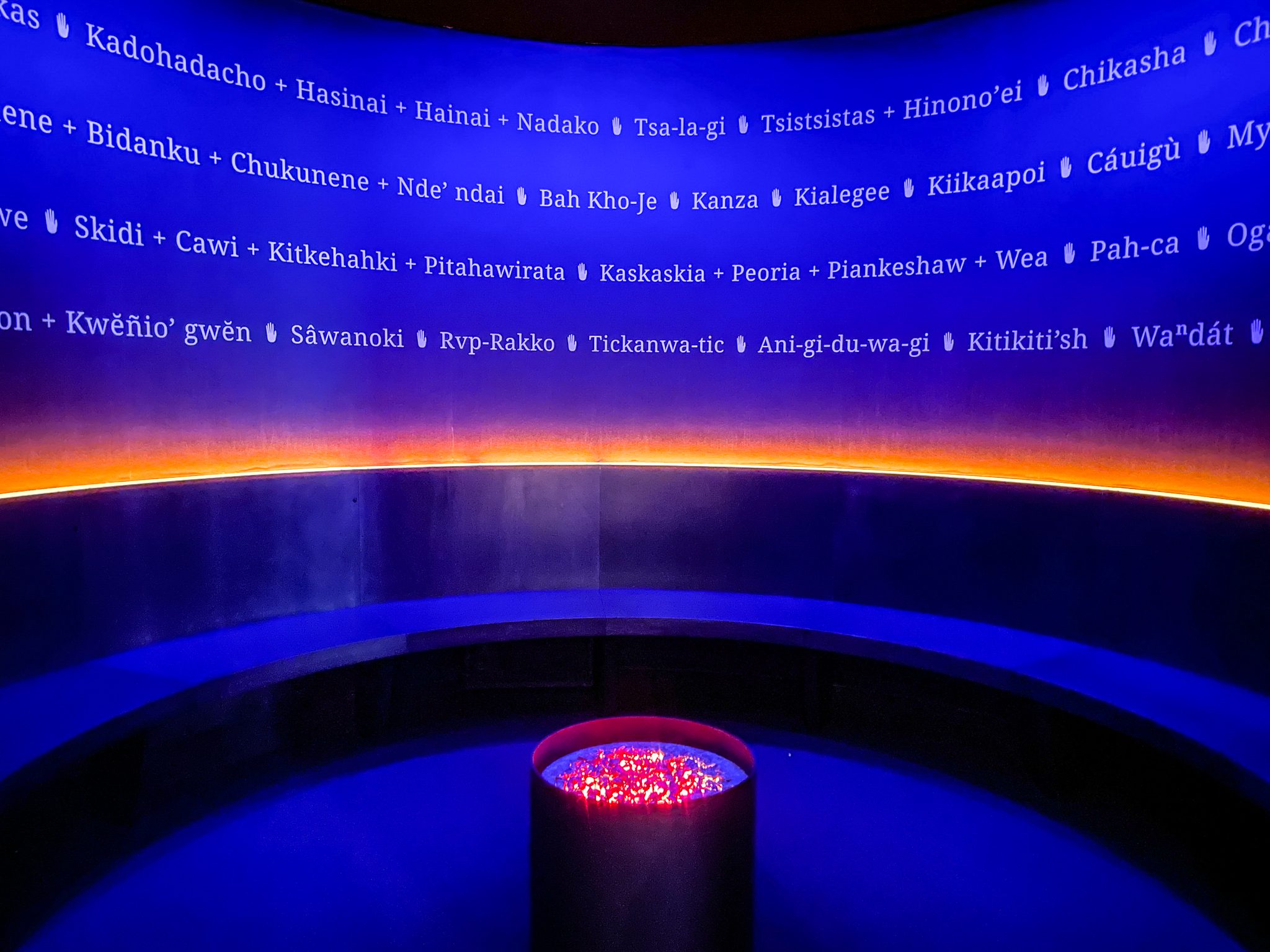 This is a place of truth, of telling the lived experiences of the 39 tribes that now reside in Oklahoma. It’s not an easy place to visit, nor a quick in-and-out experience. There’s a lot of reading, a fair amount of comparing what you were taught in school (or not taught at all!) with the documented facts, and coming to understand the depth of damage done by US policies towards tribal people.

It’s a beautifully designed museum, with the first floor walking you through the entire painful history of what has happened to the First Americans since the first non-Americans showed up and the second floor showing a native perspective on tribal art.

There are a series of maps showing the extent of First Americans’ tribal lands from the 1500s to today, and it’s a painful lesson in the racism and arrogance of those who came from away. 39 tribes now live in Oklahoma, but it was not always that way, as this map shows the original territories of those 39 different tribes.

The Indian Removal Act was passed by the US Congress in 1830, despite heated debate. Those against the Act argued that it would negate every federal treaty already negotiated with the tribes. As the display says, the Act was “an act of greed” to expand the US territory beyond the 40 million acres secured by those treaties. The display in the museum is direct and pointed: “Signed into law without regard to American Indians’ rights, the act affirmed the racist belief that whites had supremacy over Indigenous peoples.”

The Cherokee Nation brought two cases to the courts, both ending up before the Supreme Court, which ruled in favor of tribal sovereignity. And then President Andrew Jackson ignored the Supreme Court decision and forced the removal of nearly 100,000 American Indians.

It gets worse. In 1903, the Supreme Court ruled that Congress could alter treaties without the consent of the tribes involved (Lone Wolf v. Hitchcock).

It’s more historical proof that Presidents and Supreme Courts can get things horribly, terribly wrong, and the result is suffering by a specific group for many, many years or decades of discrimination. (Dred Scott v Sandford in 1897 and Plessy v. Ferguson in 1896 are better known examples of similarly racist Supreme Court decisions.)

You could spend a day reading all the material on the first floor and not fully absorb it. I read a lot of it, and my heart ached by the time I got through the first section alone. This is history told by those oppressed and it would do all Americans good to know the facts, to understand the impact, and then work to at least try and mitigate the centuries-long damages done.

Winiko: Life of an Object Exhibit

The second floor of the museum focuses on objects that were acquired by white collectors more than 100 years ago, in their efforts to save what they say as “a vanishing culture.” Many of those objects ended up in the Smithsonian Museum, displayed without cultural context or any involvement by the tribal people who created them. An all-Native team of curators led the process of returning these objects to Oklahoma, using their tribal knowledge to explain the significance of each object and how and when it was actually used (most of the Smithsonian display information was dead wrong). 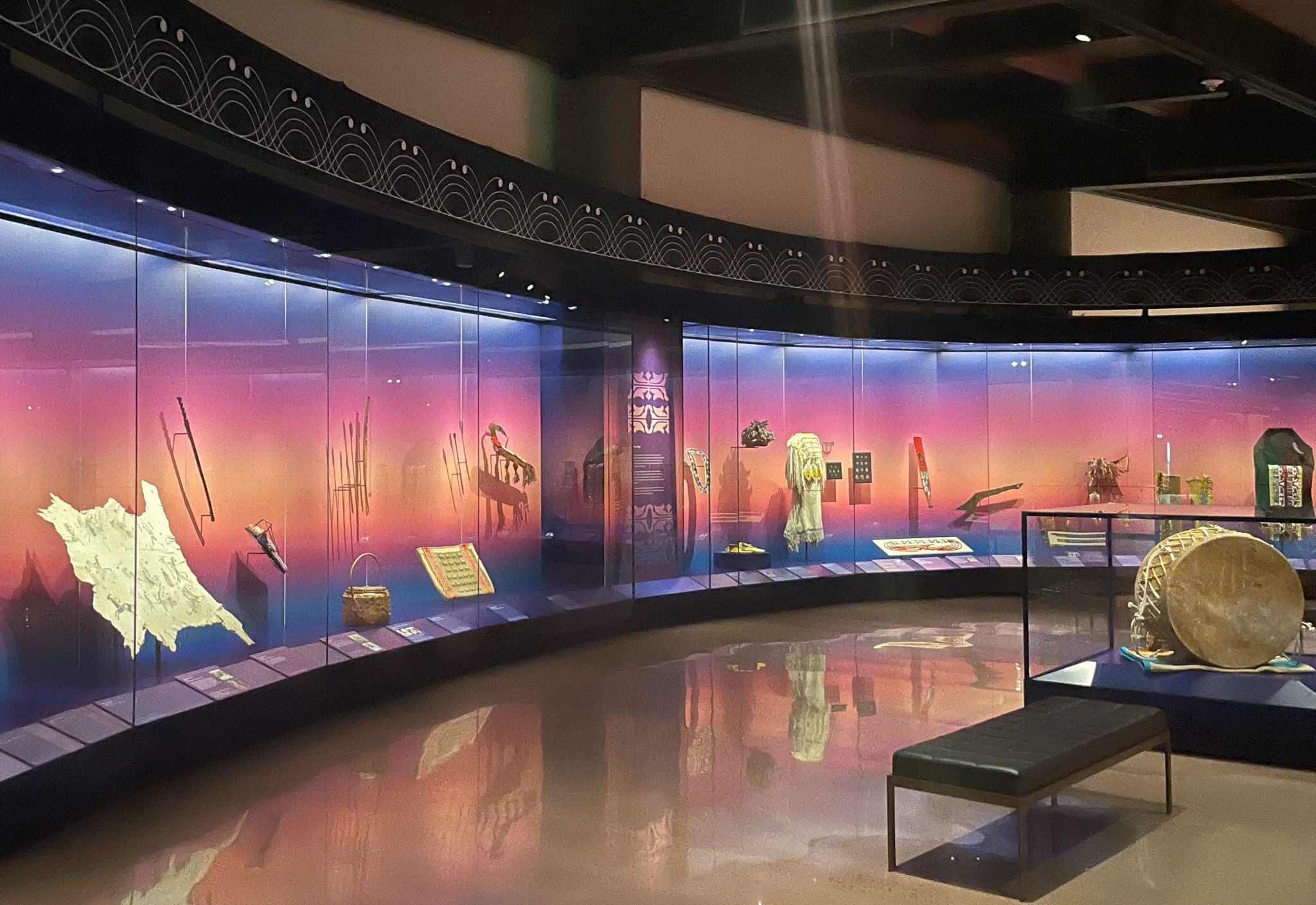 The objects are beautifully displayed and explained. See that white object on the left? Let’s take a closer look… 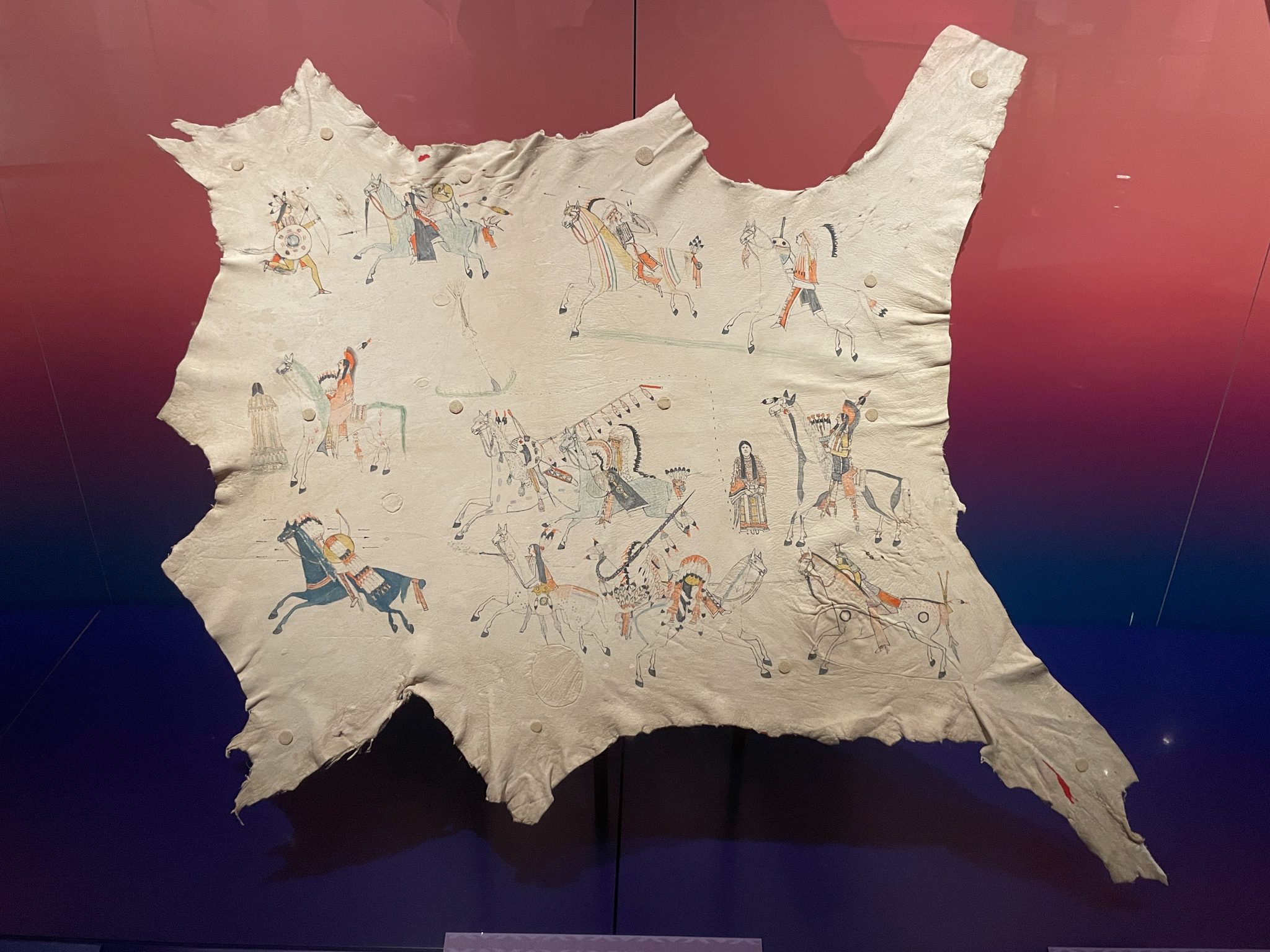 This sá:cút (hide calendar) is a visual record of a specific historical event (which is unknown), painted on buffalo hide by Silver Horn (Kiowa tribe) around the year 1900. The figures portrayed are actual people who could have been identified by their shields and outfits.

One of the purposes of this exhibit, besides bringing the artifacts home to Oklahoma, was to reunite each piece with their tribe. So beisde this hide is a small photo of Donald Tofpi (Kiowa), the great-grandson of Silver Horn, in 2019, when he and this piece were brought together. There’s a long arc of justice here, finally served. 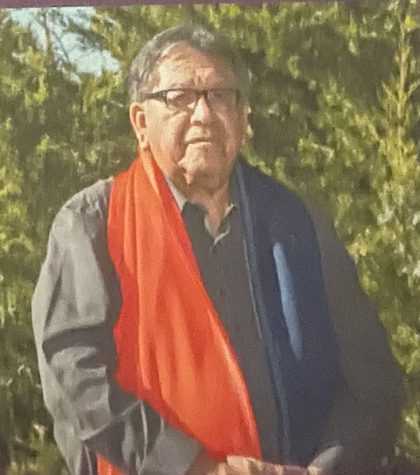 I’ll leave you with one more example of the beautiful objects on display in this exhibit. Each piece illustrates so clearly the artistry of the maker and the extensive cultural history of the tribe that produced the artist. 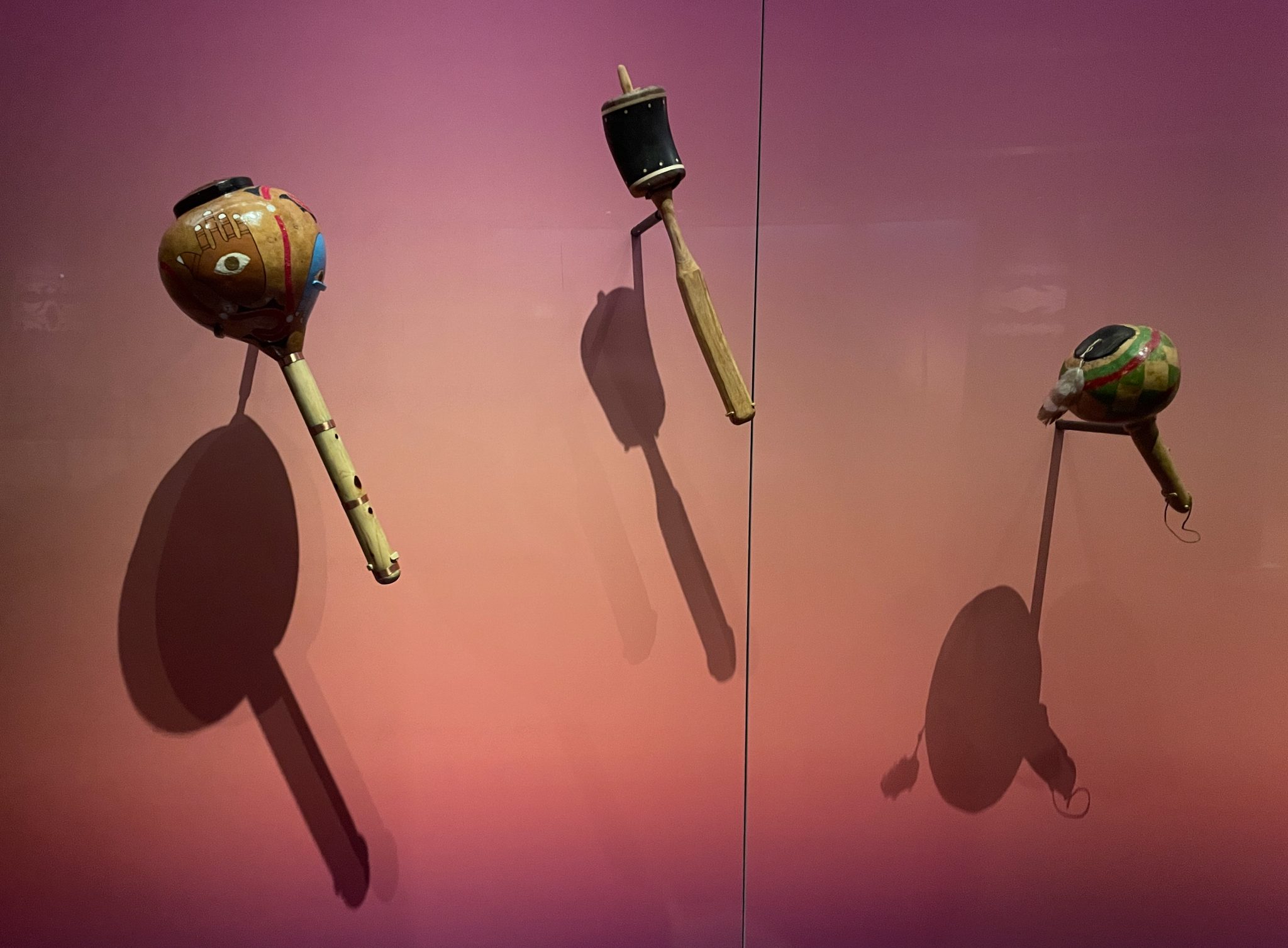 Let us continue to share this expansive place of dreams and promise, where we live and walk together on good red earth. Let us remember to live as good relatives. You are earth. So am I.