The Woody Guthrie Center in Tulsa, Oklahoma is a comprehensive look at the life and works of Woodrow Wilson Guthrie, better known as Woody Guthrie. Born in Okemah, Oklahoma in 1912, he became one of the most prolific and influential folksingers in America by following his heart and singing his truth. Everyone from Pete Seeger to Bob Dylan was inspired by Woody to get up and DO something, and the museum does a really good job of explaining why. I wish Woody was still singing, we could use his truth-telling. 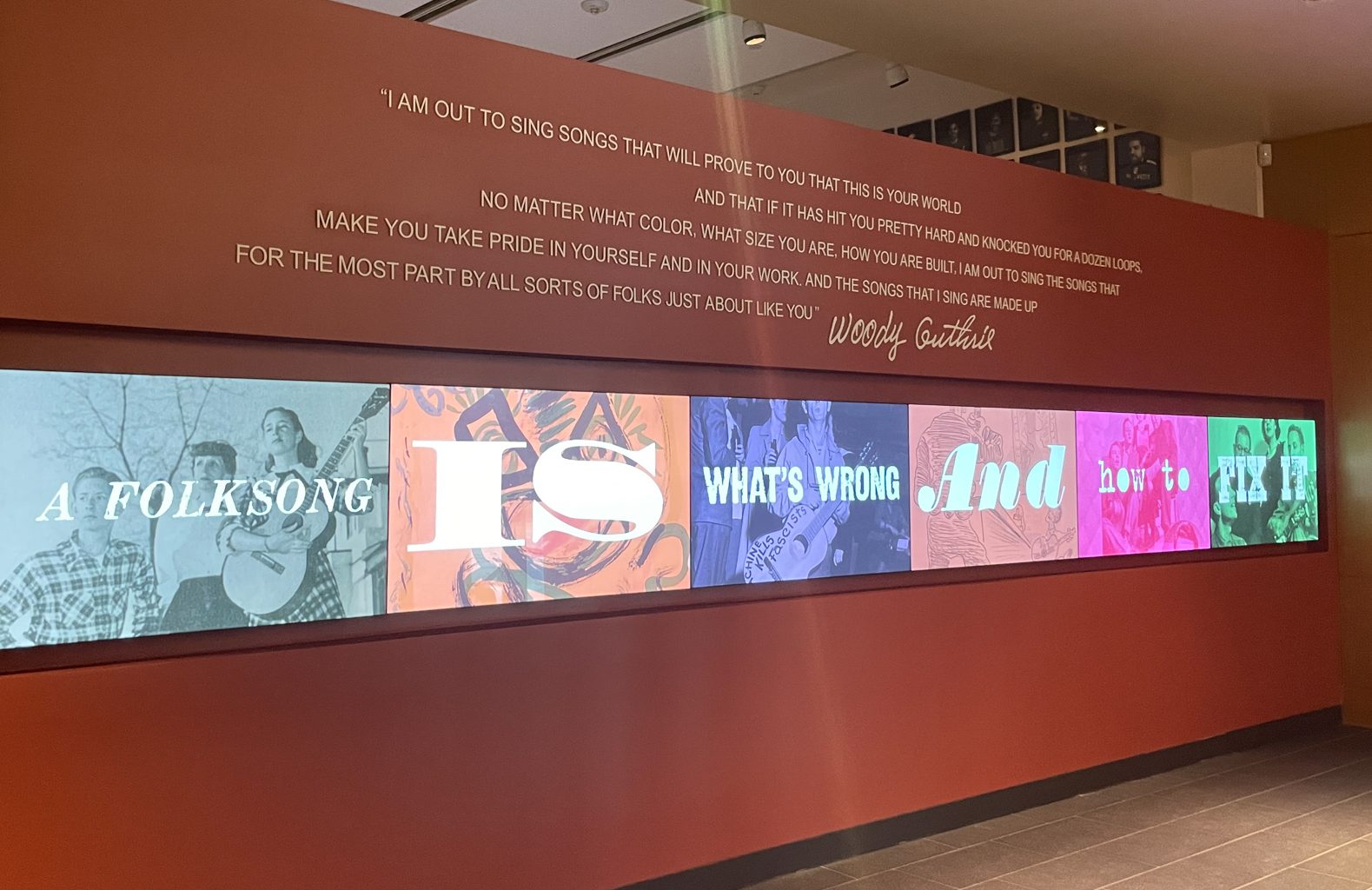 The tour starts with a short film that introduces Woody’s legacy to those who might be unfamiliar with him, including appearances by Graham Nash and Jackson Browne. When you walk out of that small theater, you see a guitar in a plastic display case. Yes, this is one of the few guitars that can actually be traced back to Woody himself. He didn’t need a fancy guitar to sing his songs.

Woody was a prolific artist, creating everything from stories to sketches to songs. And of course, one of those songs is that almost every American kid learned in grammar school. It’s also the first song I taught myself to play on guitar, way back in my early teens. I still love that song. 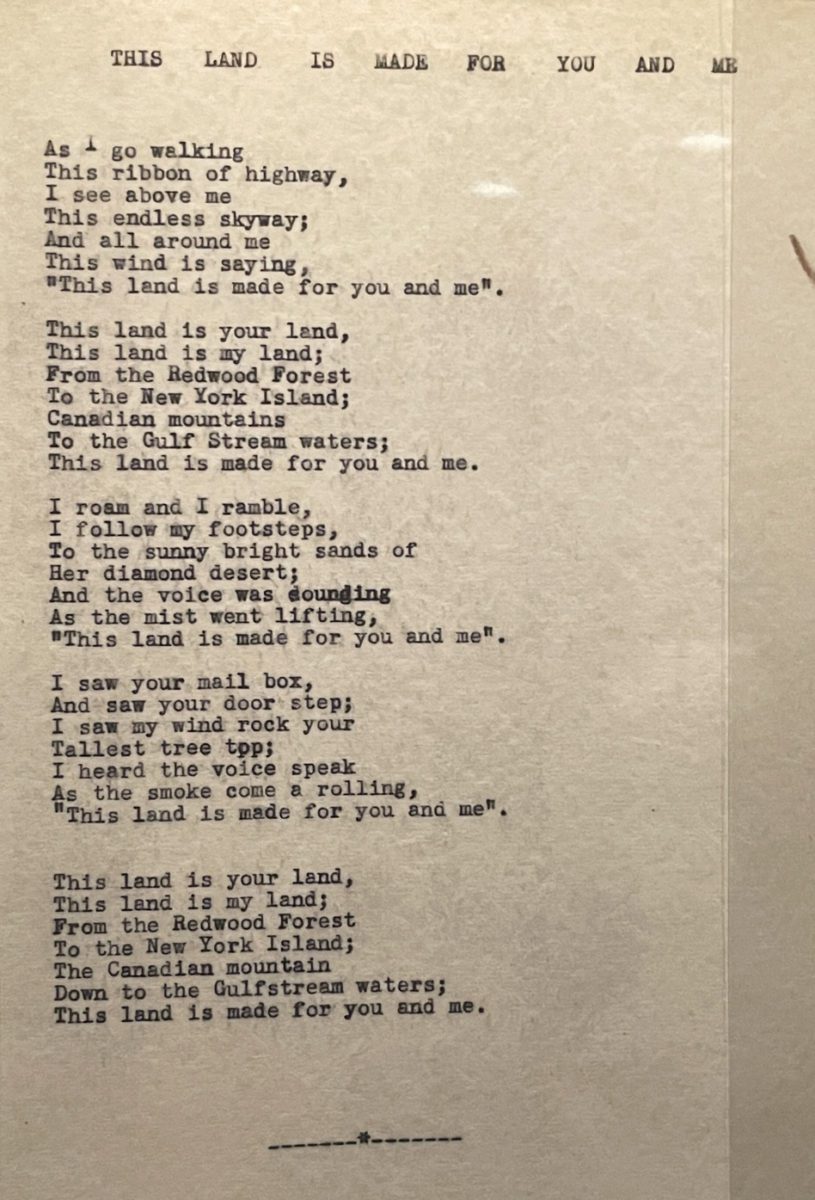 Most of the time the song is performed without these three verses, so I’m putting them here in case you haven’t ever heard them:

As I went walking I saw a sign there,
And on the sign it said “No Trespassing.”
But on the other side it didn’t say nothing.
That side was made for you and me.

In the shadow of the steeple I saw my people,
By the relief office I seen my people;
As they stood there hungry, I stood there asking
Is this land made for you and me? 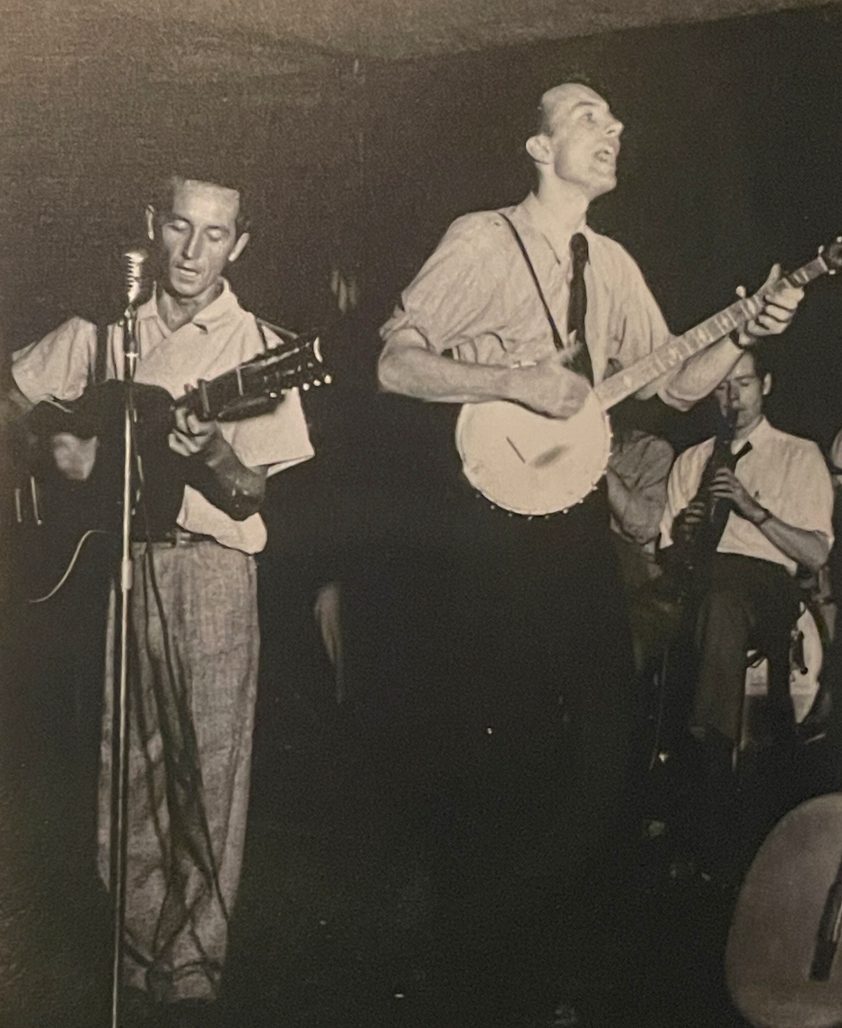 I love this photo of Woody and Pete. Just a few feet away in the “This Land is Your Land” exhibit is the video of Pete, Bruce Springsteen and Tao Rodriguez-Seeger singing This Land at President Obama’s inauguration. What a wonderful moment that was, and I was happy to relive the optimism and celebration of that day, and remember how happy Pete was to be up there singing in front of that massive crowd in Washington D.C.

If you’ve never heard of Woody, you might want to check him out. If you’re a fan, this museum will still show you things you didn’t know about this amazing musician, storyteller, friend, father, and human being. So long, Woody, it’s been good to know ya.

All of this talking about what’s up in the sky, or down in hell, for that matter, isn’t half as important as what’s right here, right now, right in front of your eyes. Things are tough. Folks broke. Kids hungry. Sick. Everything. And people has got to have more faith in one another, believe in each other. There’s a spirit of some kind we’ve all got. That’s got to draw us all together.