If you ever thought banjos were boring instruments that belong at the bottom of the ocean (an old banjo joke), you’ve never visited this place! 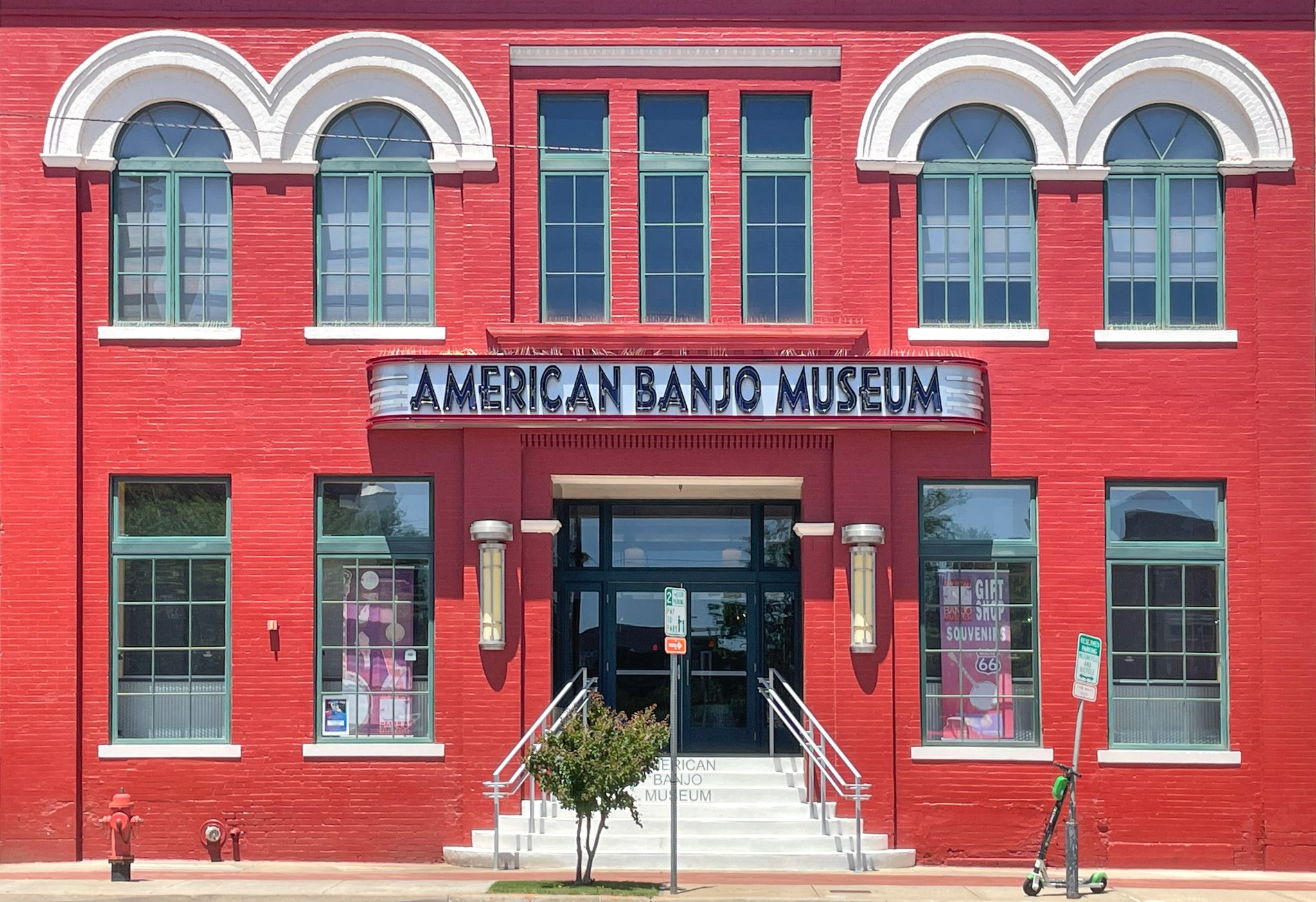 The banjo is thought of as an American instrument, and maybe you think of hollers and Heehaw when you see a banjo. But the history is so much more than that, and the museum takes its time with a detailed introduction, from the Africans sold into slavery who introduced percussive instruments (gourds, and then Banjars) to American by way of the Carribean to the minstrel shows and banjo orchestras, the folk “revival” and country music’s adoption of the sound. It’s a multicultural history and the museum does its best to cover all bases without making the introduction too long or boring.

And after that well-done introduction, you walk into the main floor of the museum where it’s breathtaking. So many banjos, such variety, and such beautiful work. Bring your camera or your camera phone because, like me, you won’t be able resist taking pictures. Lots of pictures. This place was clearly designed to be photographed, and its a treat, whether you’re an amateur or a pro. 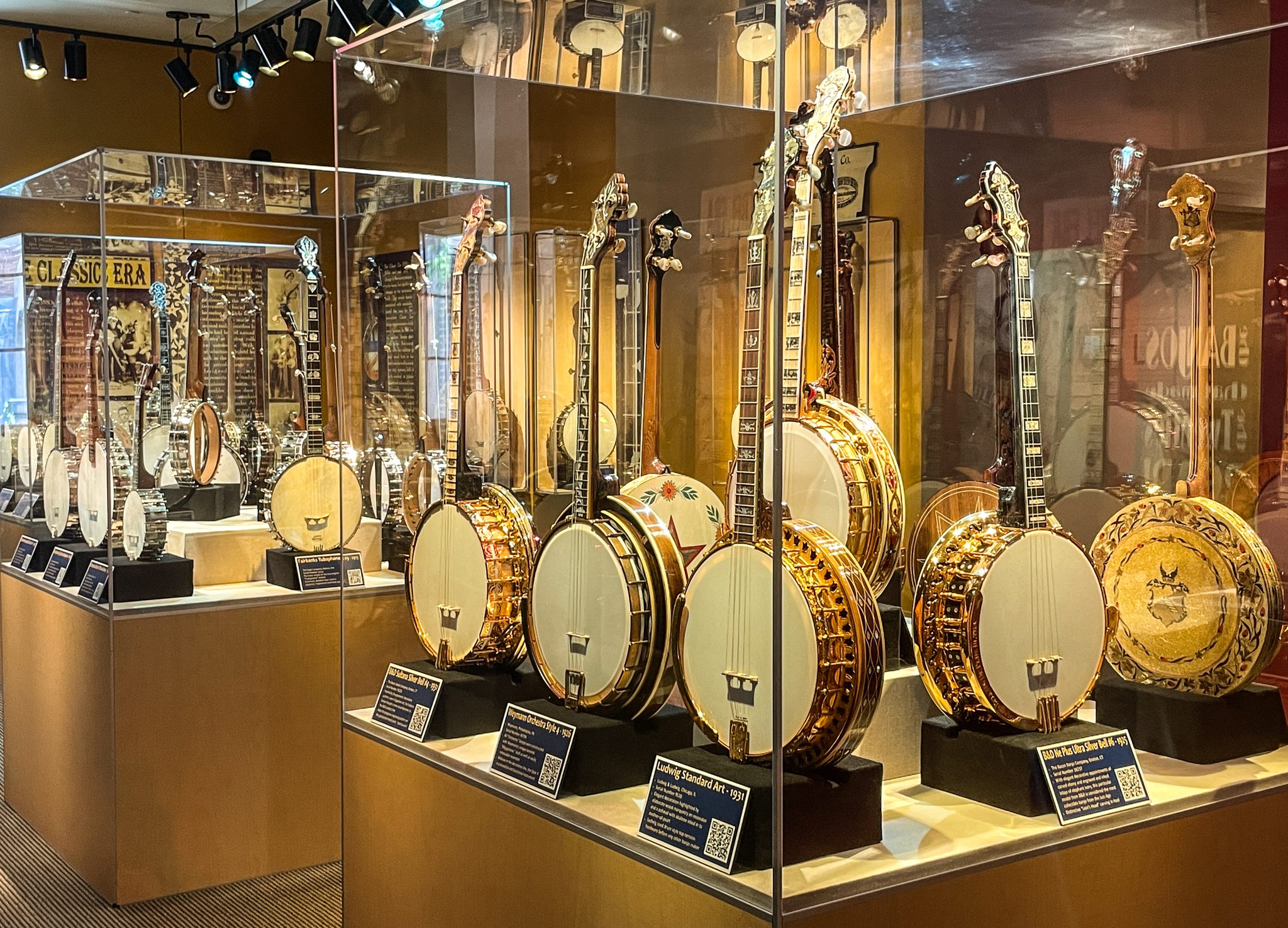 By the 1890s, banjo orchestras were all the rage (no, I am not kidding) and this short-necked banjorine was designed for playing lead in such an orchestra. It was made by the Fairbanks Company in Boston, which made me think of the world-renowed Boston Symphony Orchestra and wonder if they ever had a banjo in that august performance hall. 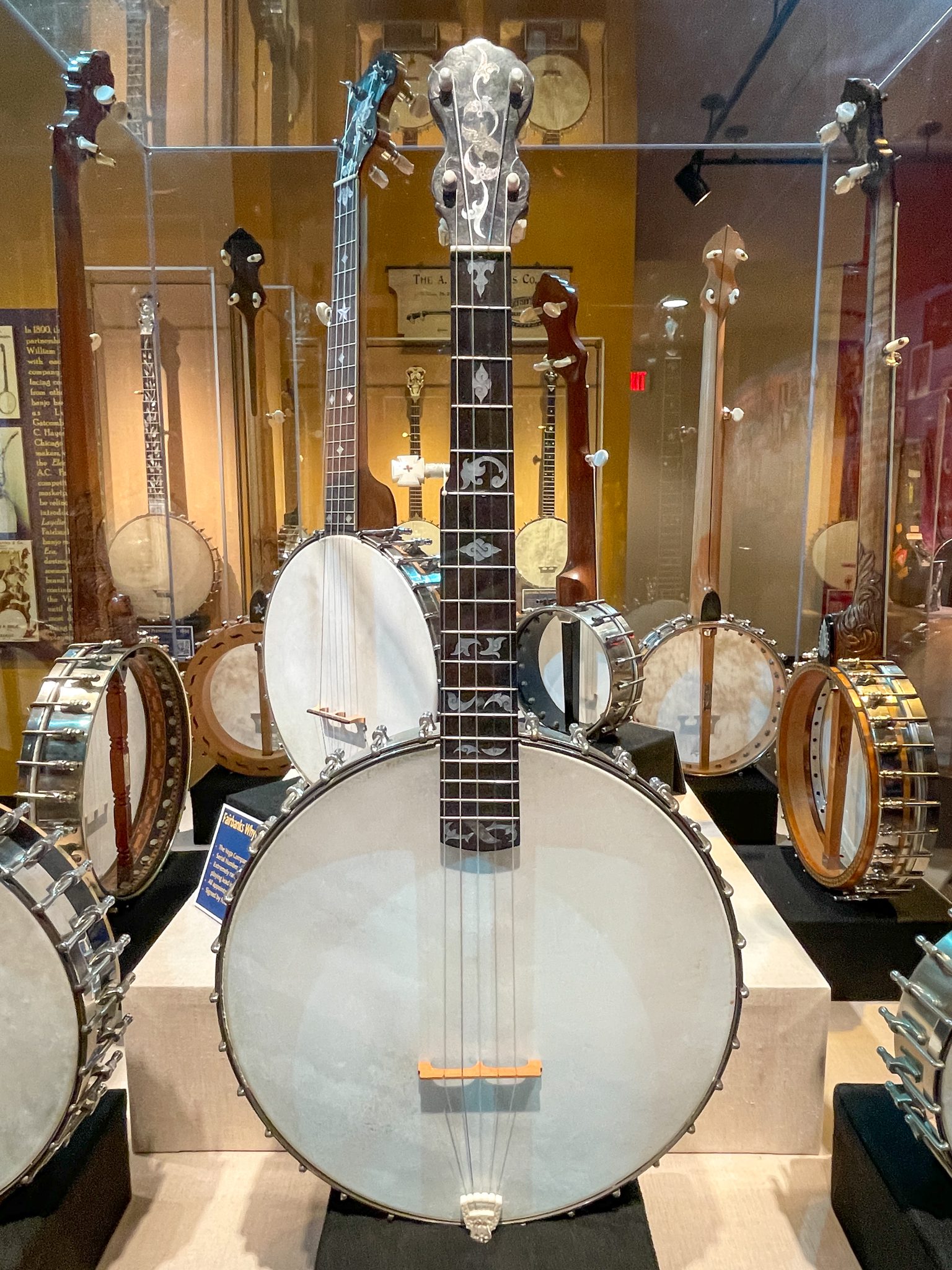 Beauty and the Banjo

As far as beauty and craftsmanship goes, the early part of the 20th century was the peak for beautiful banjos. I mean, just look at these amazing instruments. Let’s take a closer look at that one in the lower right, the Ludgwing Standard Art from 1931. 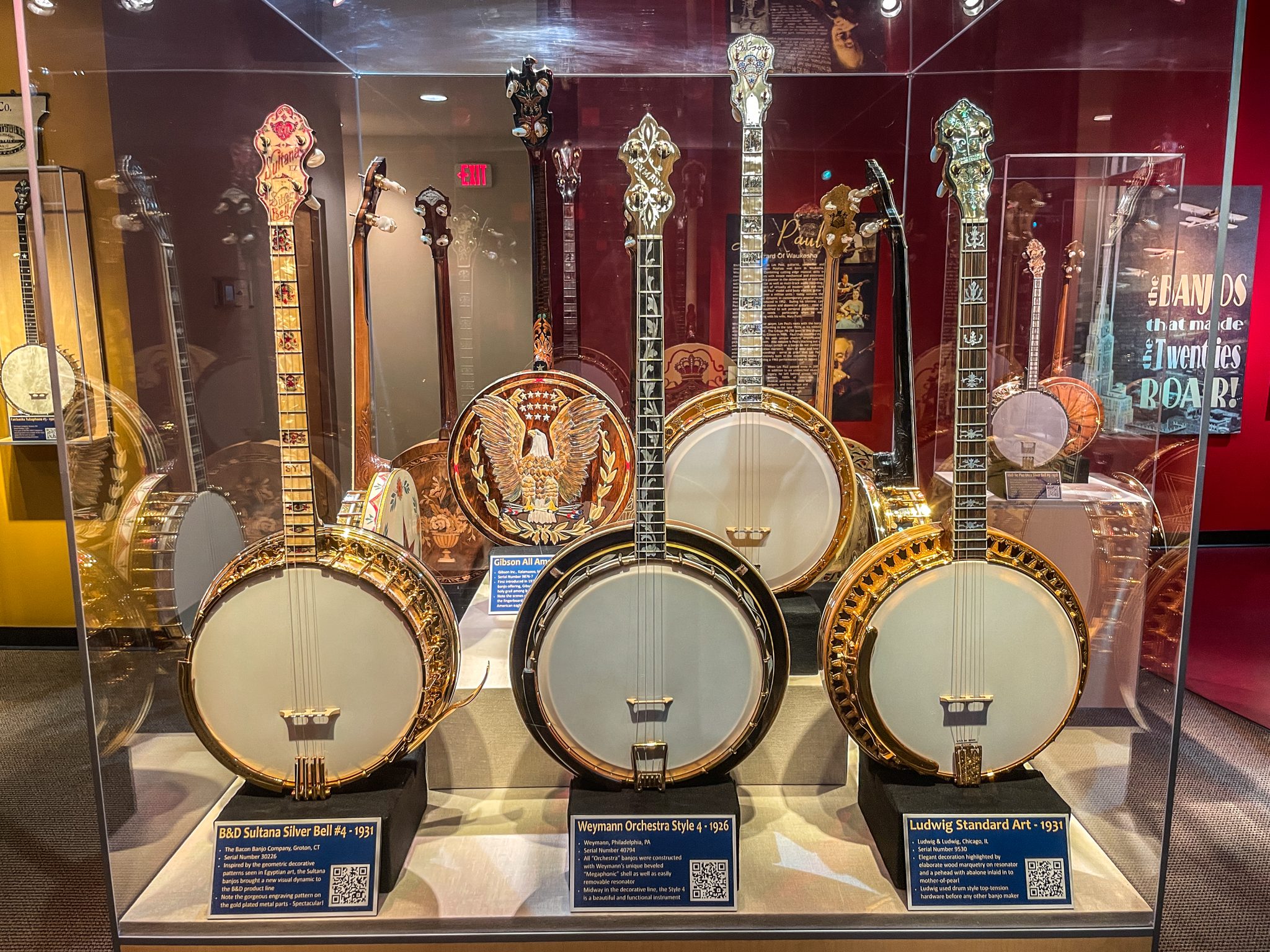 Made by the Ludwing Company in Chicago, this banjo has exquisite wood detailing on the resonator (back). And for you banjo folk, Ludwig was the first banjo maker to use drum-style top-tension hardware (those screw-like things surrounding the banjo head). That’s gotta be an answer to a question in a music trivia contest at some point in my life. 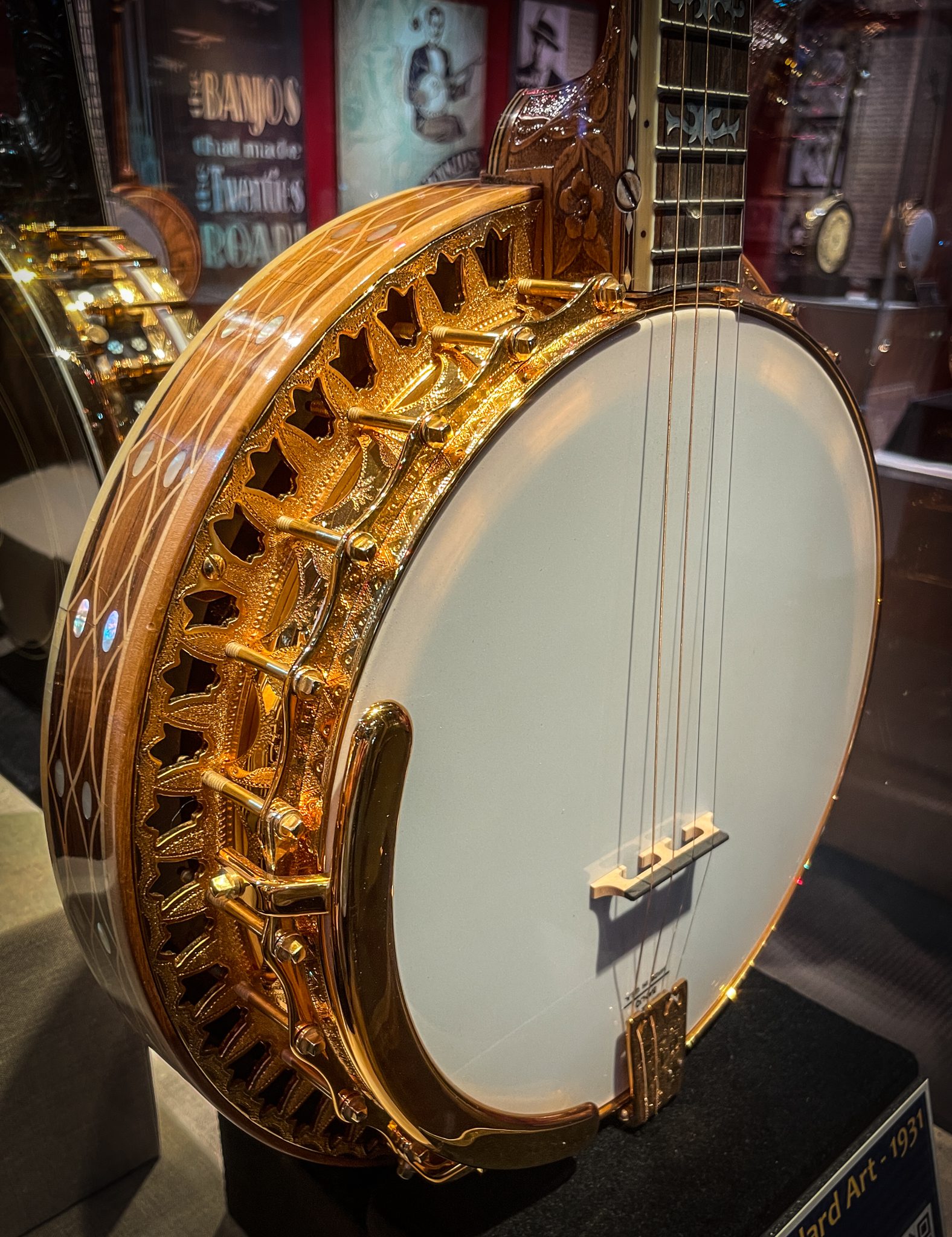 Pete’s Here, as He Should Be

A couple of lifetimes ago, I sailed on the Clearwater and met Pete Seeger a few times. But a decade before that, I saw him play at Freight and Salvage in Oakland. It was a small, but dedicated audience, and he had everyone singing along with a gesture of his banjo neck in our general direction. 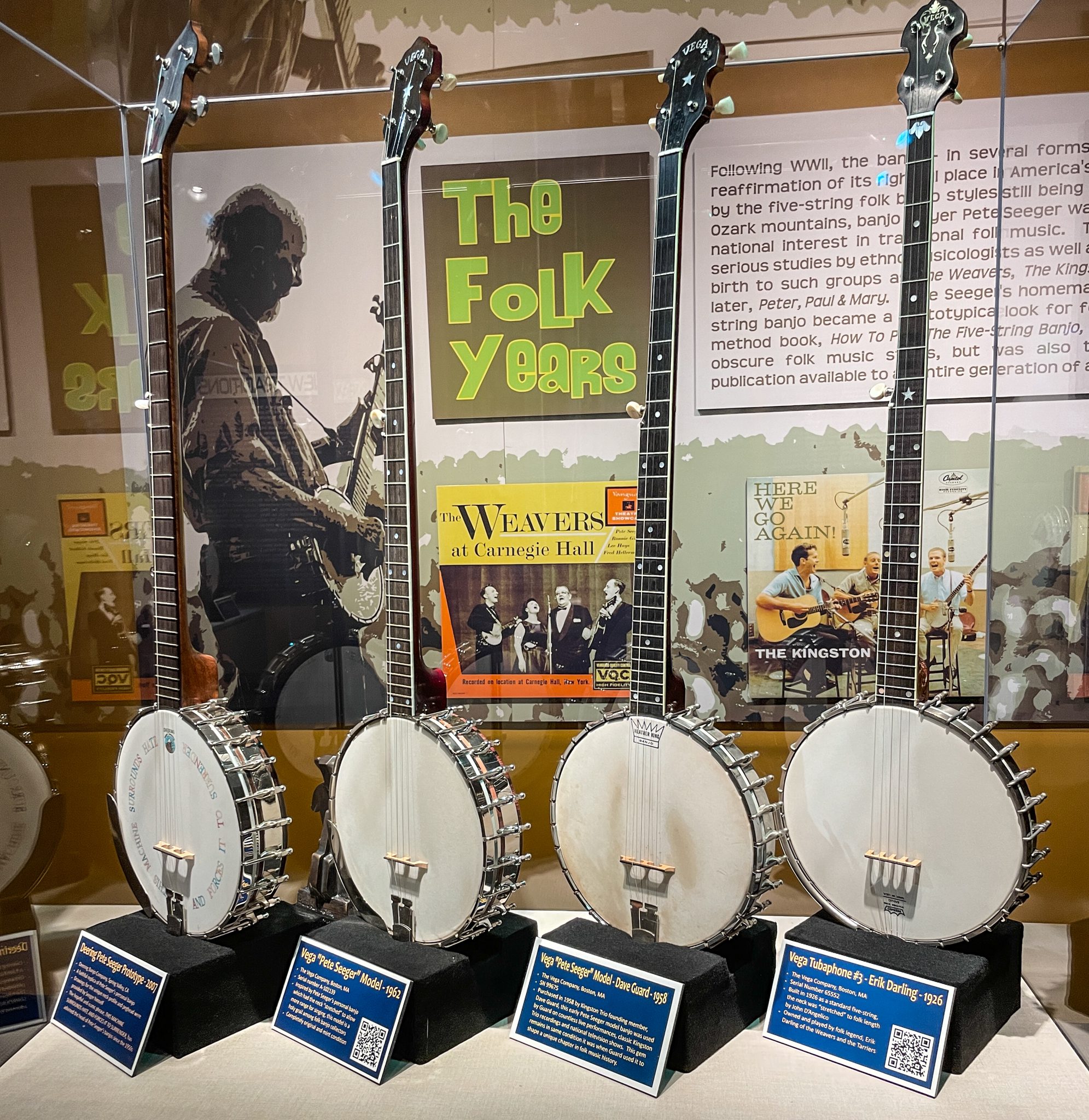 I fell under Pete’s spell like everyone else, and I’ve had a soft spot for the long-necked banjo ever since. So I was happy to see Pete was inducted into the Banjo Hall of Fame in 2015, and he has a pretty nice display on the main floor, too. (The woman at the front desk said they had invited Pete to the opening of the Museum but he declined, saying he wasn’t sure the world needed a banjo museum. Maybe he thought they should be played, not displayed. But I’ll venture to say the world actually does need a banjo museum when it’s this full of beautiful instruments.)

Women of the Banjo

The special exhibit during my visit was Women of the Banjo, and it was an inclusive, deep-dive look into female banjo players from the earliest days of country living to Dolly Parton and Taylor Swift (and I never thought I’d put that last name into a blog post, but she has played the banjo in concert, and the museum recognizes her role in widening the appreciation for the instrument). I especially appreciated the panel in the exhibit that looked at intersection of banjos and slavery and how the newest generation of women players is changing the conversation as well as the musical form. Well done to the curator of this exhibit for not dodging difficult questions and shining a light on women banjo players from all cultures and eras. 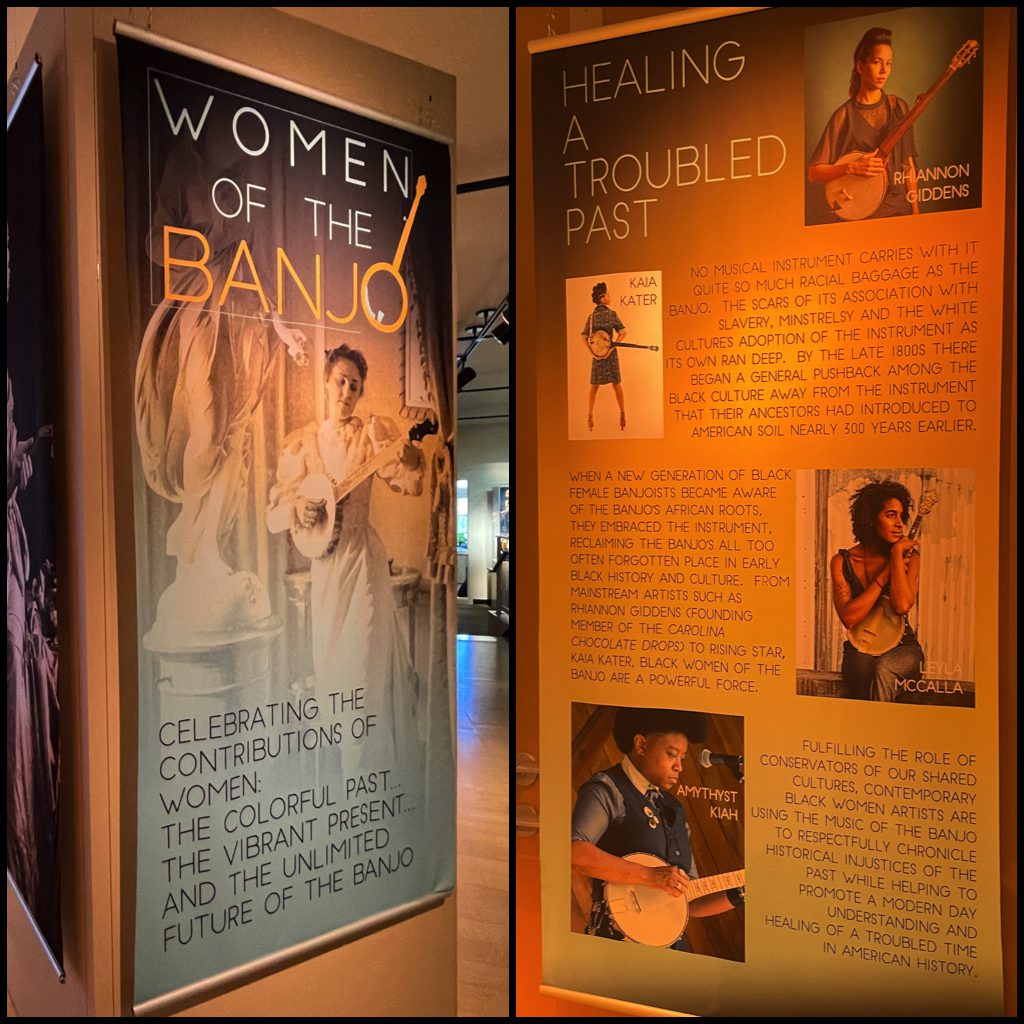 Oh, and you can’t have a banjo museum without conservation efforts, so here’s a look at the workshop wall where banjos are waiting to be lovingly restored by people absolutely dedicated to the idea that every banjo is worth saving. 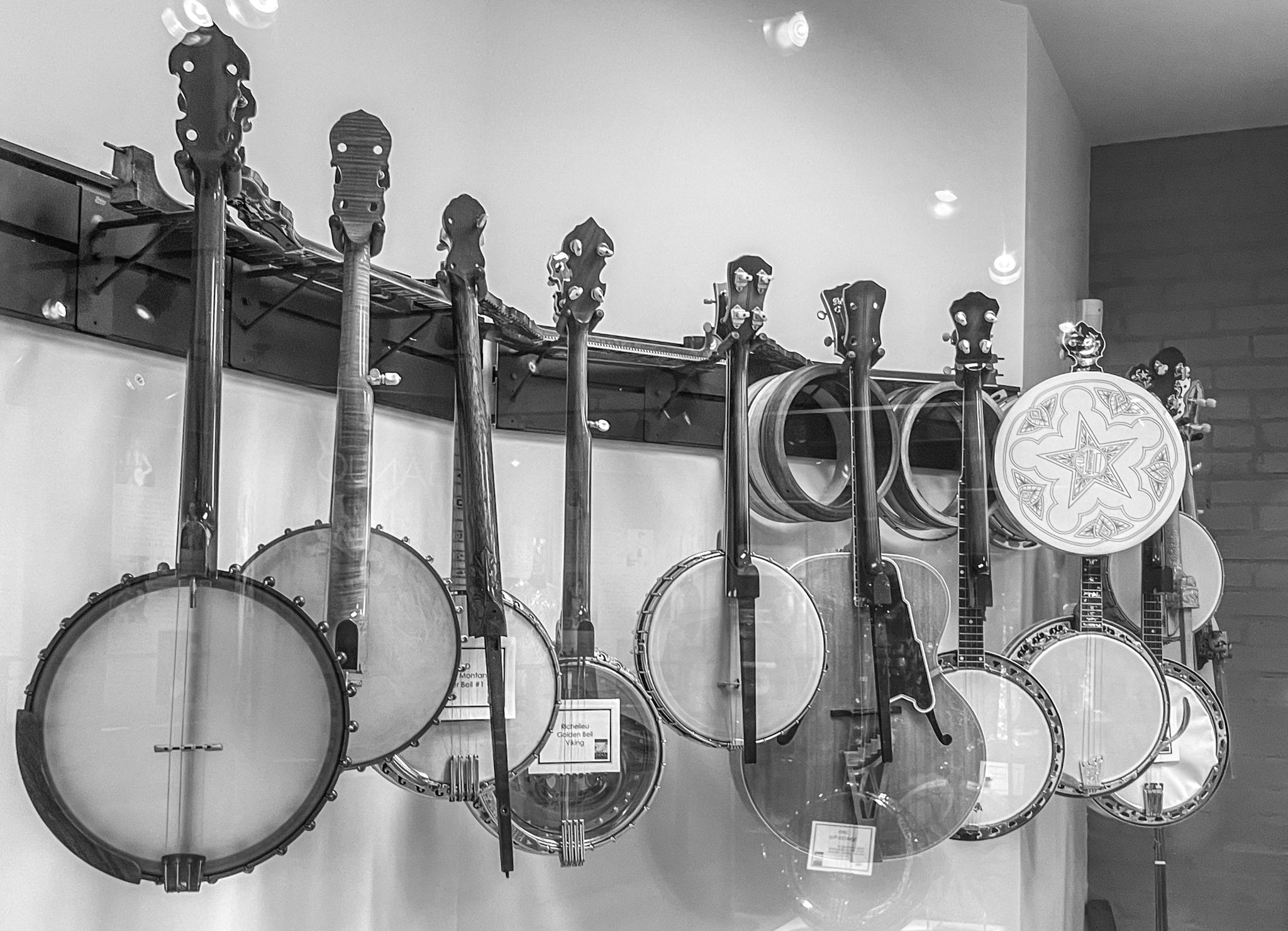 I’ll close out this report with a detail from a banjo that absolutely stole my heart. If they sold replicas of this peg head, I’d buy it in a heartbeat. 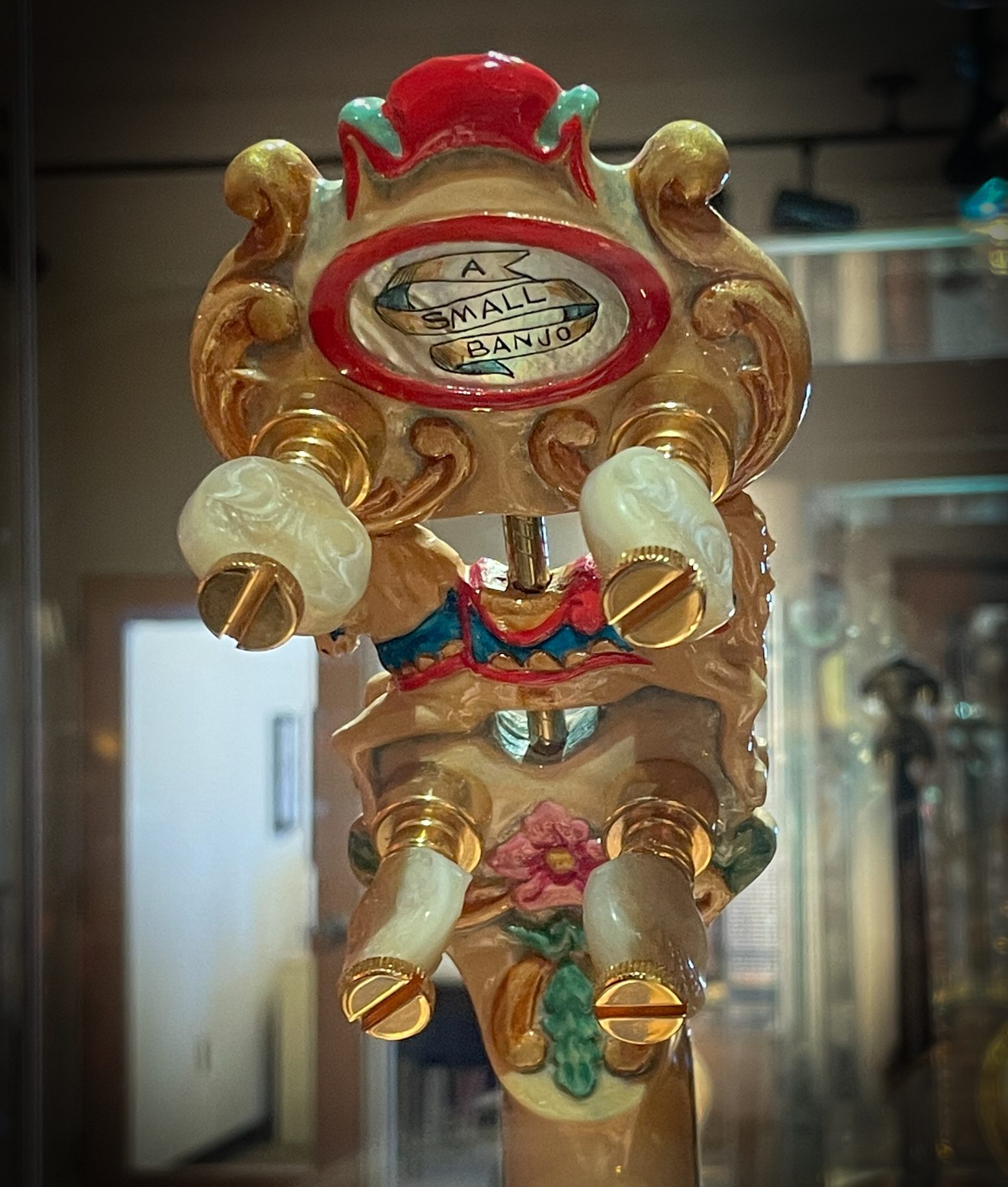 When I got out of school, I spent two years just hitchhiking around. Every time I met some old farmer who could play banjo, I got him to teach me a lick or two. Little by little, I put it together.