I spent way too long in the southeast and eastern parts of the US (thanks, pandemic) the last few years. So once I got out to the west, my plan was to spend the winter exploring places in New Mexico and Arizona. Here’s a wrapup of my winter: what I saw, where I went, and some tips for fellow travelers.

I started 2022 at Anza-Borrego in California, before moving back to Arizona and New Mexico for the rest of January, all of February and March, and most of April. I hit some places more than once because they were convenient stops on the way, most notably Gilbert Ray campground outside Tucson, AZ and Caballo Lake State Park, between Albuquerque and Las Cruces, NM. Both have a laidback vibe, with a decent enough drive to get to grocery stores, supplies, etc. so they worked well as midpoints in a longer trip. 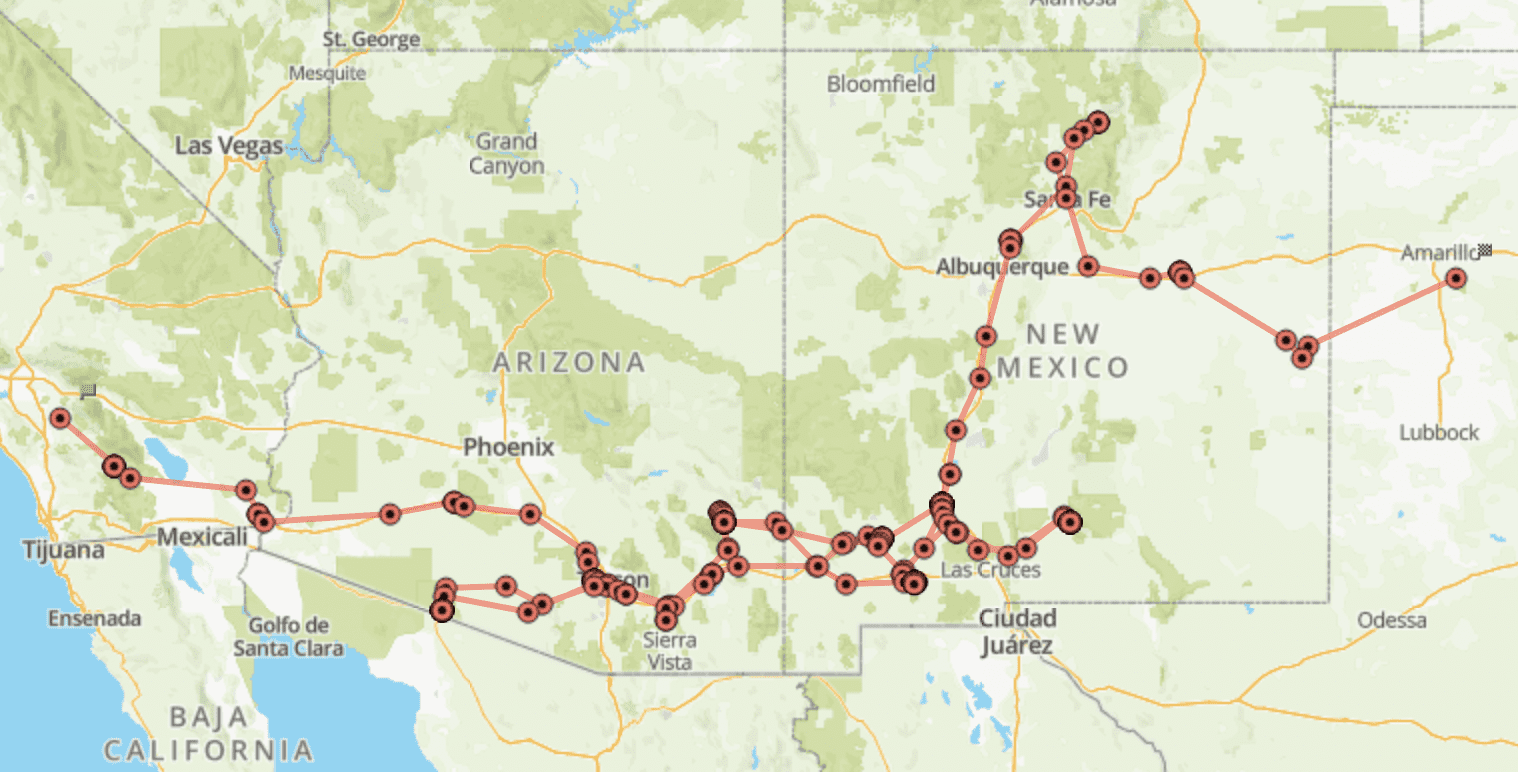 I was kind of relieved to leave California at the start of 2022, where gas prices hovered around $5.00 gallon in December/January. And when Russia attacked Ukraine and gas prices climbed (thanks, oil companies…), I was relieved that I didn’t have any big distances to cover this winter. New Mexico was the cheapest gas among CA, AZ, and NM but they still weren’t giving it away (it was $4.29 in early April).

The big save here was campground expenses, both the NM annual pass and the Senior pass that covers most federal campsites (see Camping Passes below). I stayed 14 days at several places (Oliver Lee, Caballo Lake, Rockhound, Organ Pipe) and that translated to a lot less moving and gas, and more chances to explore the areas in depth. It felt like a luxury to spend 14 nights in one place when I started, and then I quickly got used to that and wanted more of it. The leisurely pace was a nice break between last fall’s Colorado Plateau adventure and this Spring’s push eastward.

I knew going in that it wasn’t going to be balmy with lovely tropical breezes. I didn’t expect overnight lows to hit 15F or daytime highs to be 94F. And I definitely didn’t expect almost constant winds starting in mid-February. And when I say “wind” I mean 20 mph winds with gusts to 40-45 mph. I don’t drive when that’s the day’s forecast, because the forecast is usually pretty accurate here in the southwest when it comes to wind.

I ended up running four different weather apps on my iPhone (Clime, Weather, Dark Sky, and Wind Alert). I had alerts set up for each location when I was there and for the next place I was going to go. That enabled me to decide a few days in advance of the planned move day if the weather would be good or if I needed to go early or stay another day. I probably did the “not today” decision a half-dozen times in two months (mid-February to mid-April). And, no, I didn’t regret paying for a campsite if I left it early. I’d rather be safe than make a decision based solely on dollars. And with the New Mexico annual camping pass, it wasn’t a big financial hit to leave a day or two early.

I mostly chose state parks, for a few reasons: fellow campers are nearby but not on top of you (as in most commercial RV parks), there are camp hosts to keep an eye on things, and most of them offer electric and water hookups at your site, which is convenient for longer stays. As a solo traveler, it feels safer to me to be in state parks rather than 100% boondocking in the middle of the desert in winter. Everyone has their own level of personal safety and this is where I’ve found mine. 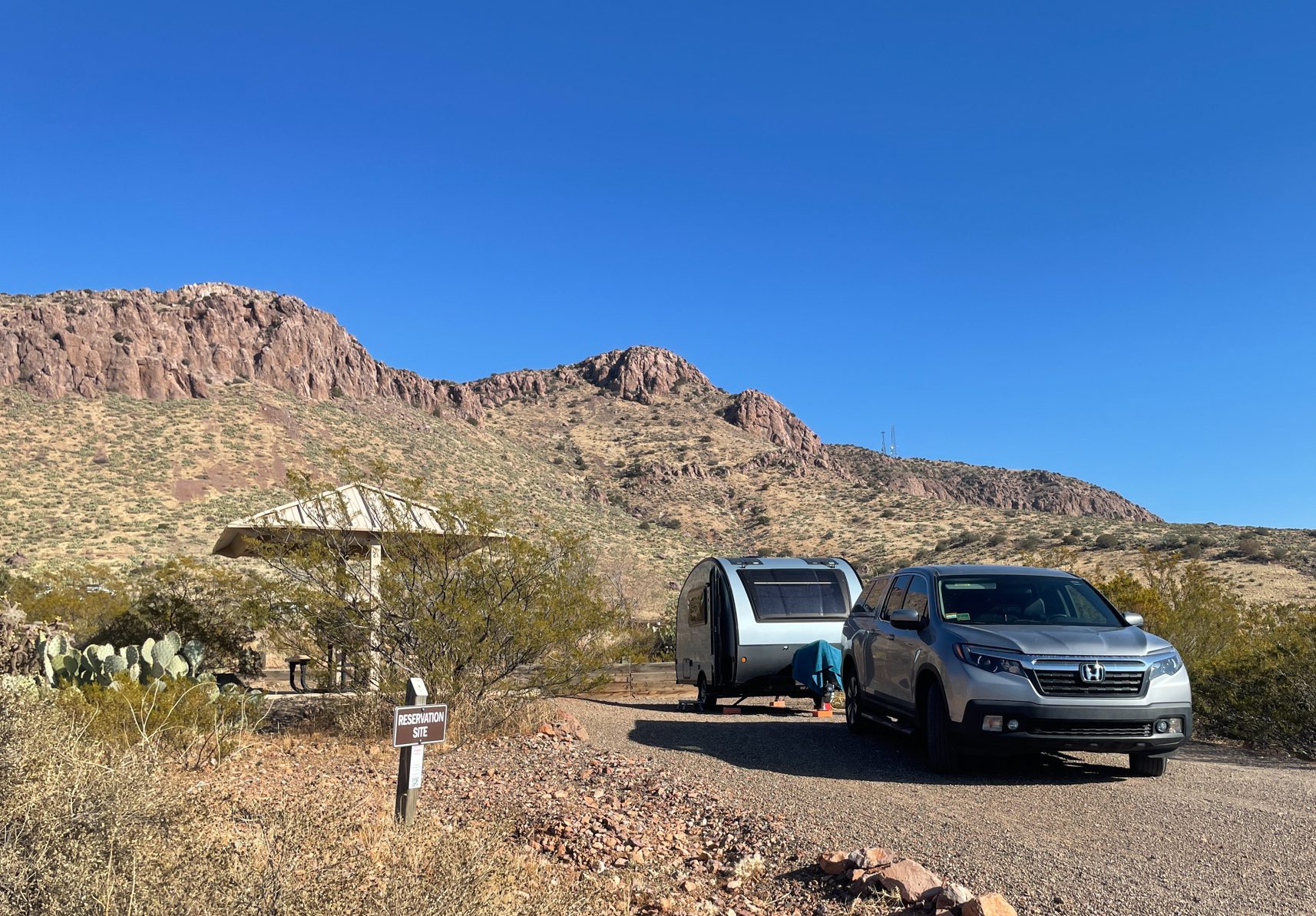 I used to be very diligent about changing my reservation to free up that site if I was leaving early. Be aware, though, that several states (including New Mexico) have changed to new change policies that penalize changes. With New Mexico, you can no longer add or remove dates from an existing reservation; you have to cancel it and rebook it, at an average cost of $17. Yikes. With my NM camping pass, it was cheaper to just leave early when I needed to, rather than pay those exorbitant change fees. If the campground looked full, I would tell the camp host I was leaving early and to give my site to anyone coming in who might need it.

I have both the National Parks Lifetime Senior Pass and the New Mexico Annual Camping Pass. The NP pass got me half-price at national campsites, like Organ Pipe Cactus. The New Mexico pass pays for itself if you plan to camp more than 30 nights in one year in New Mexico state parks. With the pass, it’s $4 for electric hookup sites and $0 for dry sites. It was a great deal for me and kept my campground spending ridiculously low in February ($162) and March ($371).

Note: Some people swear by Good Sam and Passport America but since I rarely choose to stay at RV parks, they don’t work that well for me.

Propane is easily available in the southwest, even in out-of-the-way places like Ajo (close to Organ Pipe Cactus National Monument) and Caballo (the RV park up the road from the state park). I use propane for cooking and for heat (combined with electric sometimes) so knowing I can get it anywhere is a comforting thought. It also helps that I have two 17-pound Viking tanks, so I never ran out of propane, even when dry camping. I did run one tank bone dry a few times, so having a second tank is a nice backup plan.

Grocery stores are mostly Walmart in the less populated areas, but cities have good selections. My hands-down favorite was the Lowes in Alamogordo, NM, followed by the Safeway in Safford, AZ. In a pinch, Dollar General stores in sparsely populated areas can have surprisingly good grocery selection (although no produce or meats).

As with any environment, the desert in winter has some special challenges. Here’s how I dealt with the unexpected.

There seem to be a lot of rocks on the road these days, those little ones that big trucks can send into your windshield. That’s when a fix-it-yourself windshield chip repair kit comes in really handy. You can get them at most Walmart stores on the road or order from Amazon. It definitely works – the one chip turned into about a dime-sized set of cracks before I got back to the campground. Used the Rainx chip kit and the cracks disappeared. Since then, the windshield has sat in below freezing, super-windy, rainy, and 95F weather and nothing’s happened to that spot. So, yeah, I carry a spare one now so that I can fix a chip as soon as it happens.

When I did get caught in super-cold weather, I opened up all the cabinets where the plumbing is and, since I was on hookups, I aimed a portable heater (thanks, Walmart!) at the water pump. I also have had my outside piping insulated with foam since 2016, so that helped the outside plumbing survive. I had my fresh water tank about 80% full, and while the bottom of it froze a bit but the top of the tank didn’t. (Yes, I did crawl under the trailer in freezing weather to check on things because I am that kind of obsessive vagabond.) And I tried my best to keep the frigid wind from getting under the trailer, using what I had on hand. I think it helped, but I really don’t have any proof of that; it did make me feel better to try, though.

(Random paragraph, of interest only to RVing types) Did you know you’re supposed to replace the propane detector in your RV every five years? Neither did I. Who reads the tiny print on the front of the detector? When my propane/CO detector started going off at weird hours, after years of behaving just fine, I knew something was up. It sits about 10 inches off the floor (because propane gas sinks, not rises), so I laid down to look at it and that’s when I read the fine print. Oops. An Alto friend suggested a nice replacement from eTrailer and another Alto friend showed me how to install it. (OK, he installed the whole thing in less than five minutes. I did learn how to use wire nuts watching him, and then put that knowledge to use upgrading my fridge exhaust fan a few weeks later).

Despite the cold and the wind and the cold, I’d do it all again. Being able to spend a season in a new place gave me an appreciation for the area I didn’t have before. I saw the sandhill cranes in flight and then disappear as they headed north to their spring home on the plains. I saw and felt the effects of dust storms coming across the desert. I met so many good people, from museum docents to fixers of pumps and cars to fellow campers. I learned more about myself and had the time to reflect on the past and look ahead to the future, both of which were luxuries in my working days. 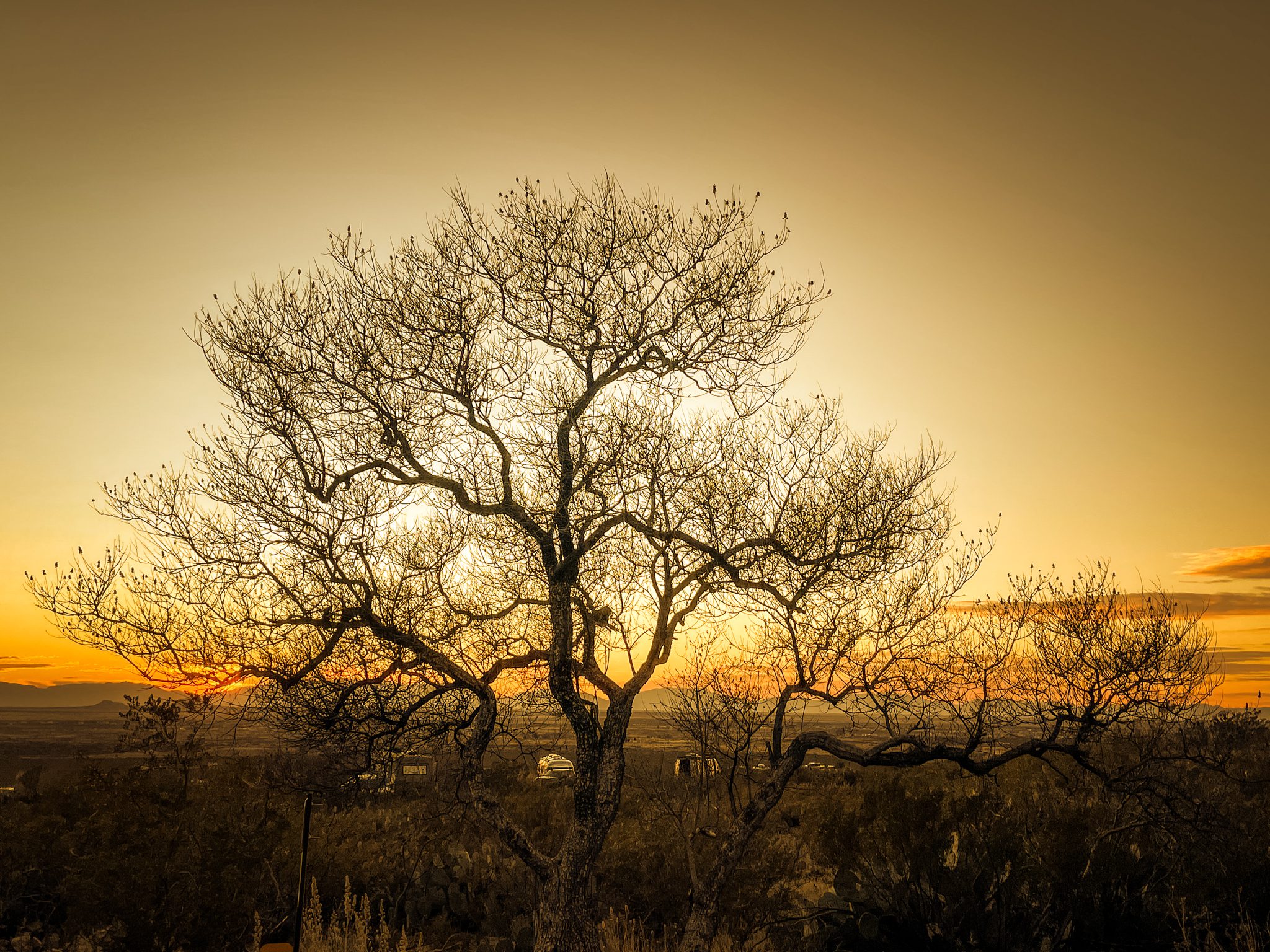 The southwestern desert is welcoming, in its own way. There’s no immediate “aha” like at Zion or Bryce. There’s simply the slow, quiet appreciation of flat land, dark skies, and beautiful light. The desert isn’t for everyone. Growing up, I didn’t think it was for me. But now I realize that, at least for these past several months, it was exactly what I needed.

At some point in life, the world’s beauty becomes enough.