One of my favorite places to stay in New Mexico is the City of Rocks campground, between Silver City and Deming. It’s definitely in the middle of nowhere, and that’s perfect for me. Adding to my stay this time was scoring the best site in the park, site 15 (Cassiopeia) in the small north (Pegasus) loop. By now, you might have figured out this park is obsessed with the night sky. 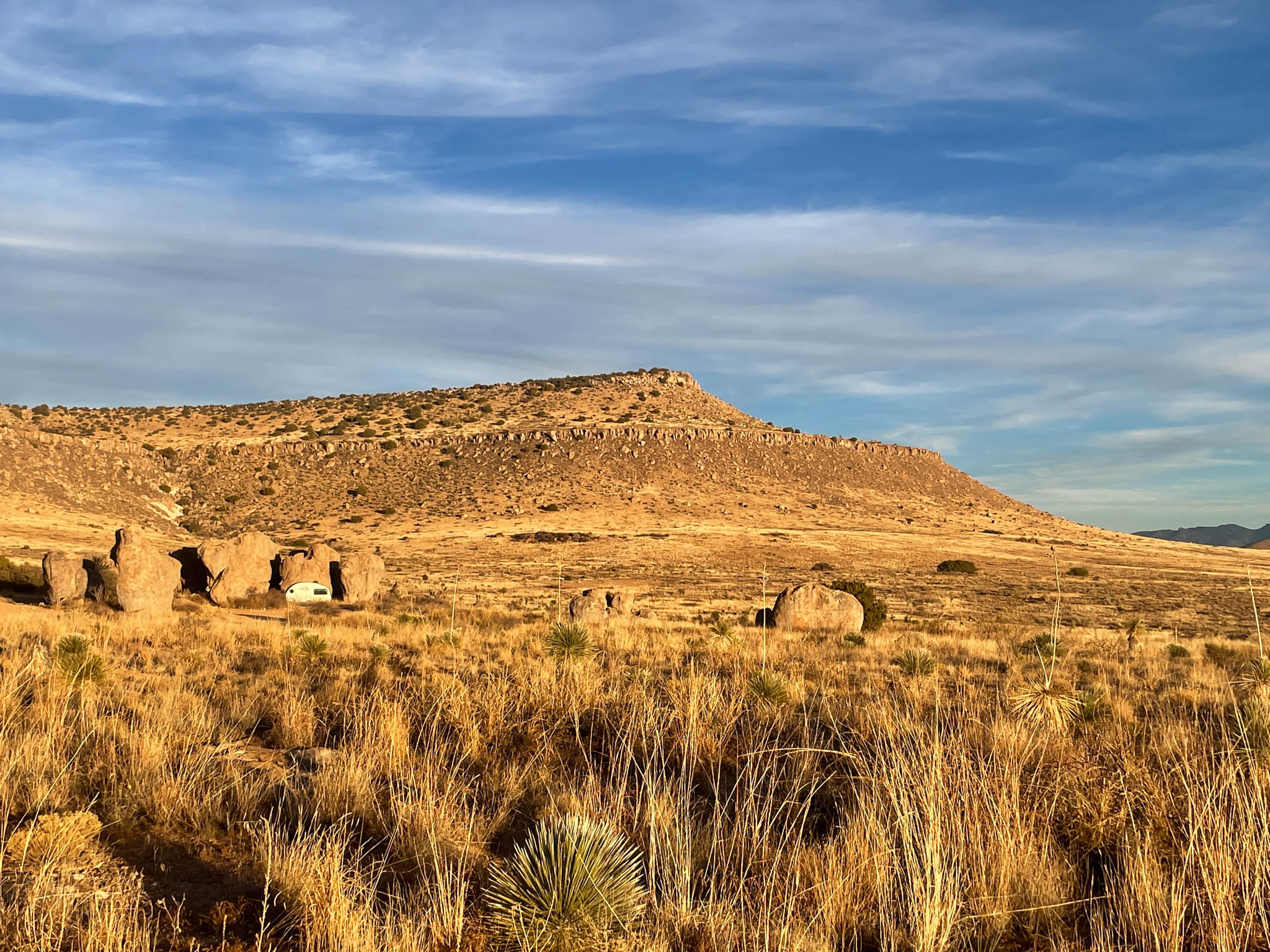 Every campsite is named after a constellation, which is pretty fun. And there is a Solar System walk, which shows the relative distances between our Sun and the planets in our solar system. Walking it does make you realize how freaking far away Neptune really is!

There’s just something about the desert flora and fauna that calls to me. This yucca branch frames the Pegasus loop of the campground. The Alto is on the other side of that left-most group of rocks, but it’s tiny compared to those big white-box RVs in the photo so you can’t see it from this direction. 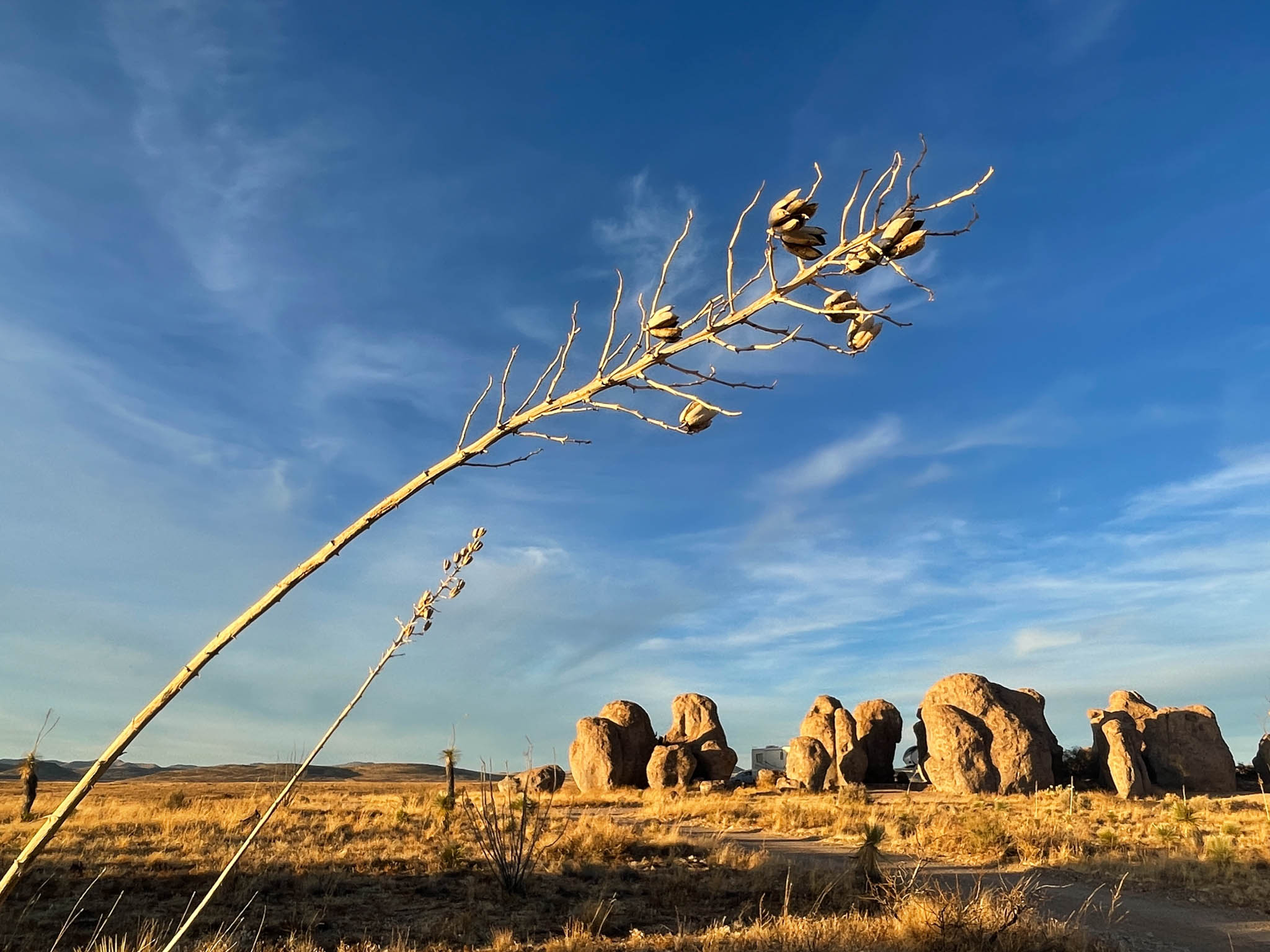 Given how flat the surrounding area is, you might be asking yourself how these huge rocks happened to get here. The answer? A volcano that erupted about 35 million years ago formed these rocks (technically, they are ash flow tuffs) and ejected them to where they still stand. Erosion over time has smoothed their rough edges and they are amazingly curved and well-balanced. And they are huge, as you can see in that first picture in this post where my Alto is dwarfed by the size of these rocks. Here’s some fun trivia: the eruption that created these rock formations was one thousand times larger than the 1980 eruption of Mount Saint Helens. Think on that for a while!

In my six nights here, I did have one stormy, windy 24 hours. The trailer rocked so hard I ended up dozing on and off all night, with big gusts shaking me awake. The clouds during the day were amazing, though. Between rain bands, I slipped outside to take some shots. This ended up my favorite image from the day-long effort to capture something of the wild weather I was experiencing. 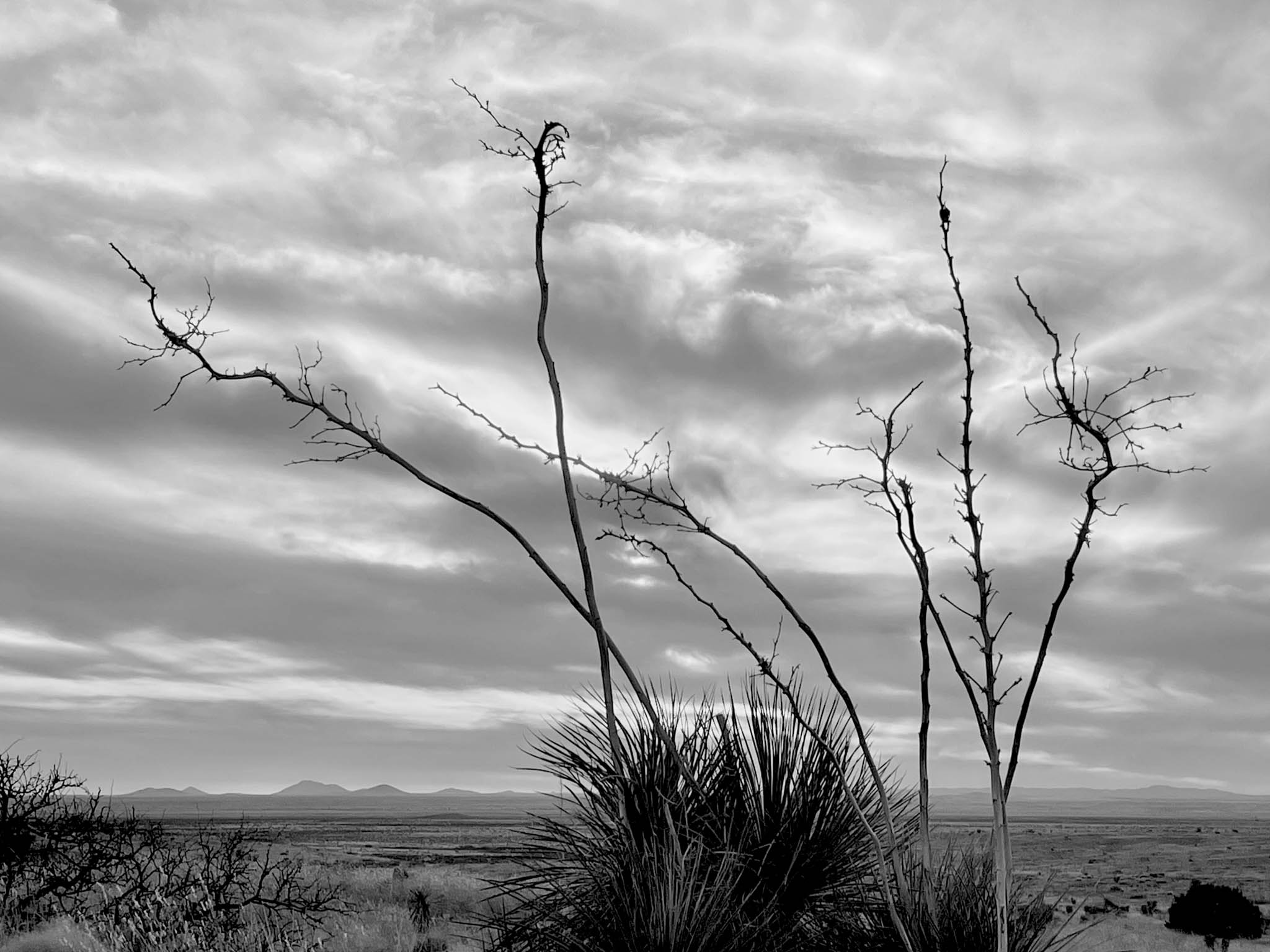 Ah, my windmill. I’ve taken so many pictures of this one, in daylight and at sunset. It is one of my New Mexico muses at this point. I always get excited the first time I walk from my campsite down the road to the windmill, wondering what the light and shadows will look like. This time I went for a wide shot, showing the flat desert country to the west of the campground. 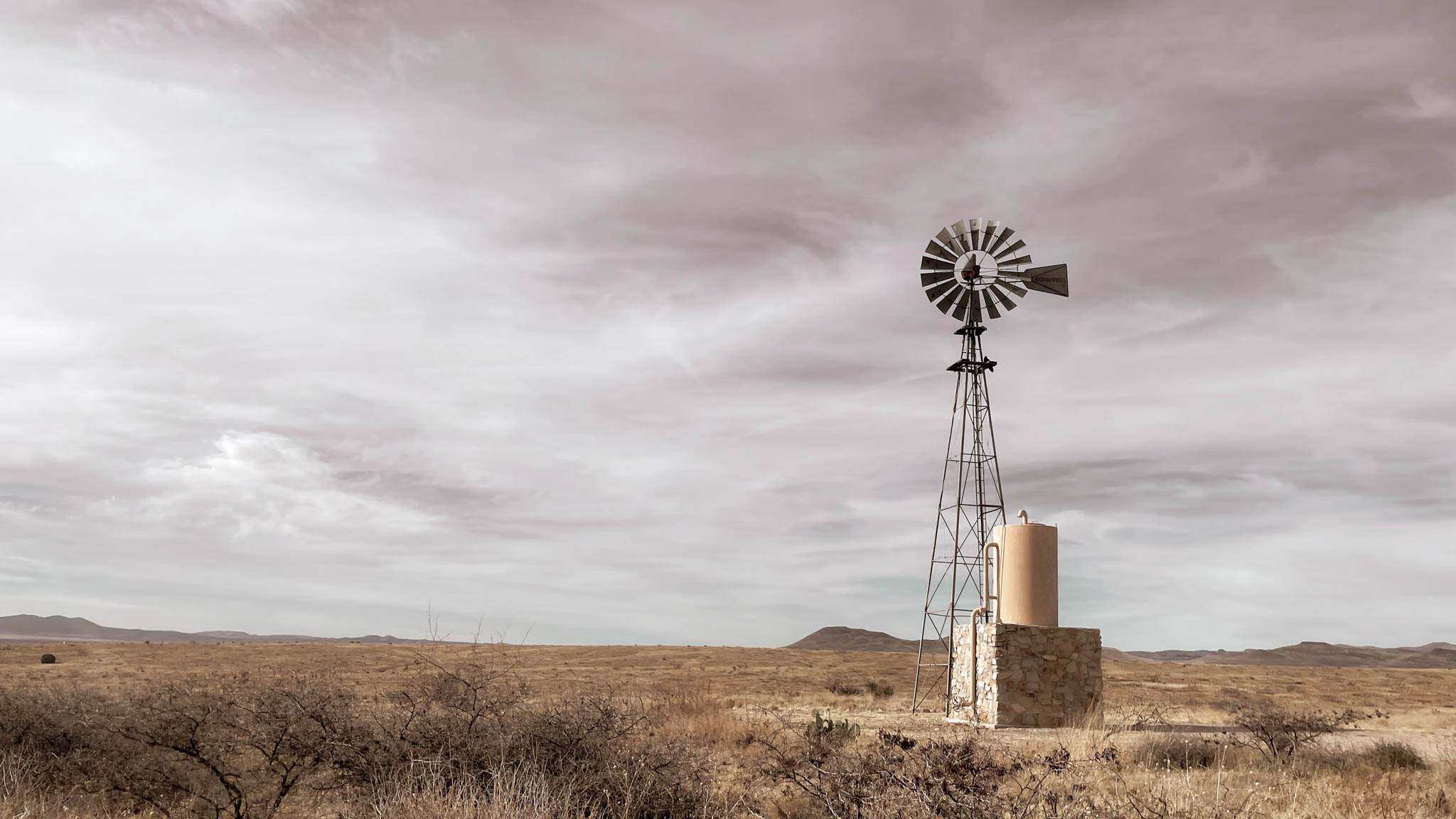 It’s not all suffering to camp out here at City of Rocks. About five minutes away is the Faywood Hot Springs compound. It was a little more run-down this time around, and the little hot spring tub I rented was clearly in need of draining and scrubbing away the algae. I just pretended it was a pond and enjoyed my hour anyways. 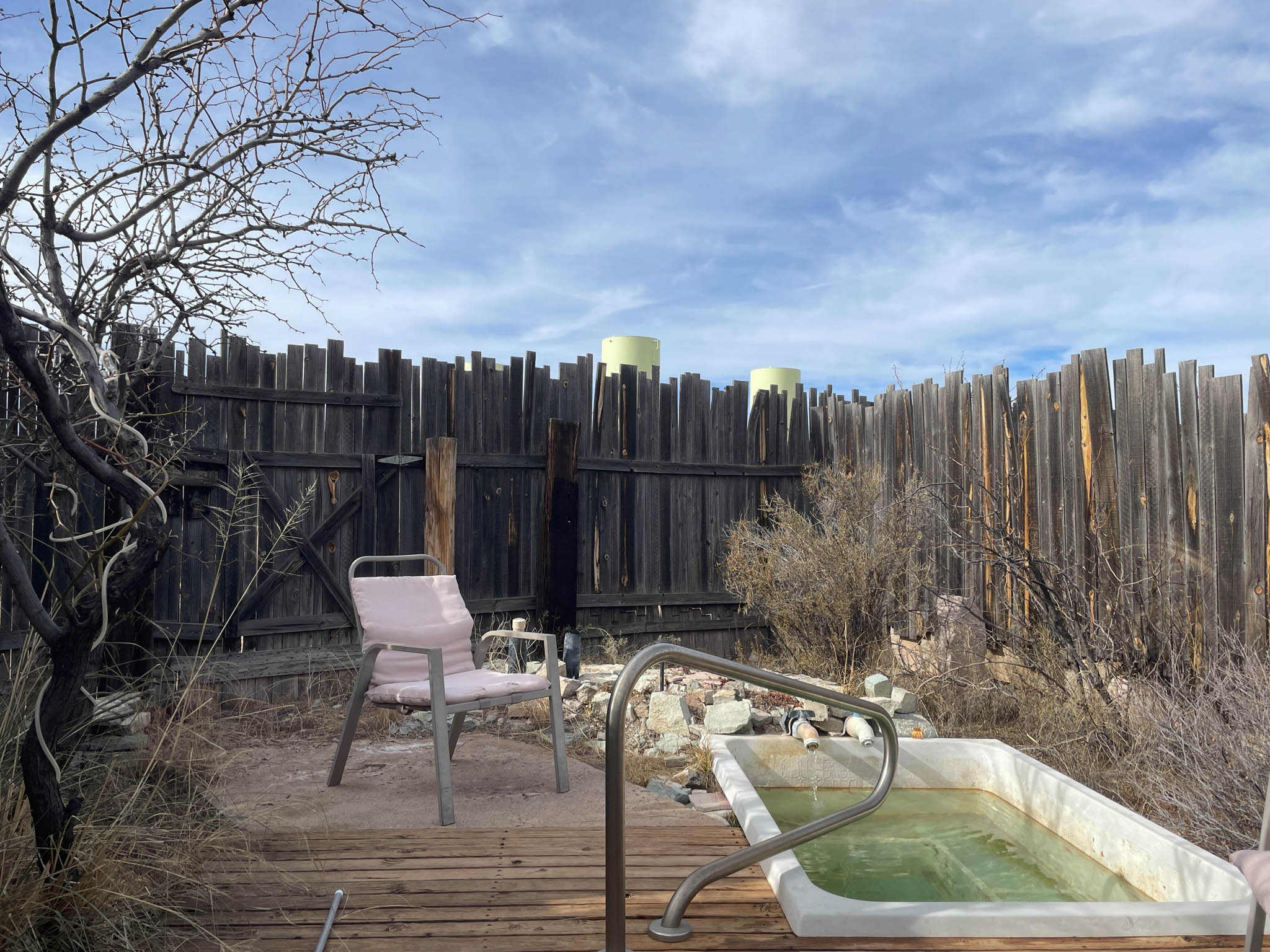 The spa day doubled as a shower day too, since I was six nights without hookups so I was watching my propane usage. Water is available at the campground, but only from two shared spigots near the toilets so refilling my tank wasn’t as easy as hooking up a hose. (For the curious out there, it involved filling up recycled soda bottles with water and then using a funnel to empty them one by one into the fresh water tank of the Alto. I forgot to buy some 2-gallon jugs of water, so I was improvising containers this trip.)

The stargazing wasn’t great this trip because of the full moon rising just at sunset. That big old moon was pretty darned spectacular. As it rose over the mesa behind my campsite the last night, I played with tripod and camera to get a shot worthy of its majesty. 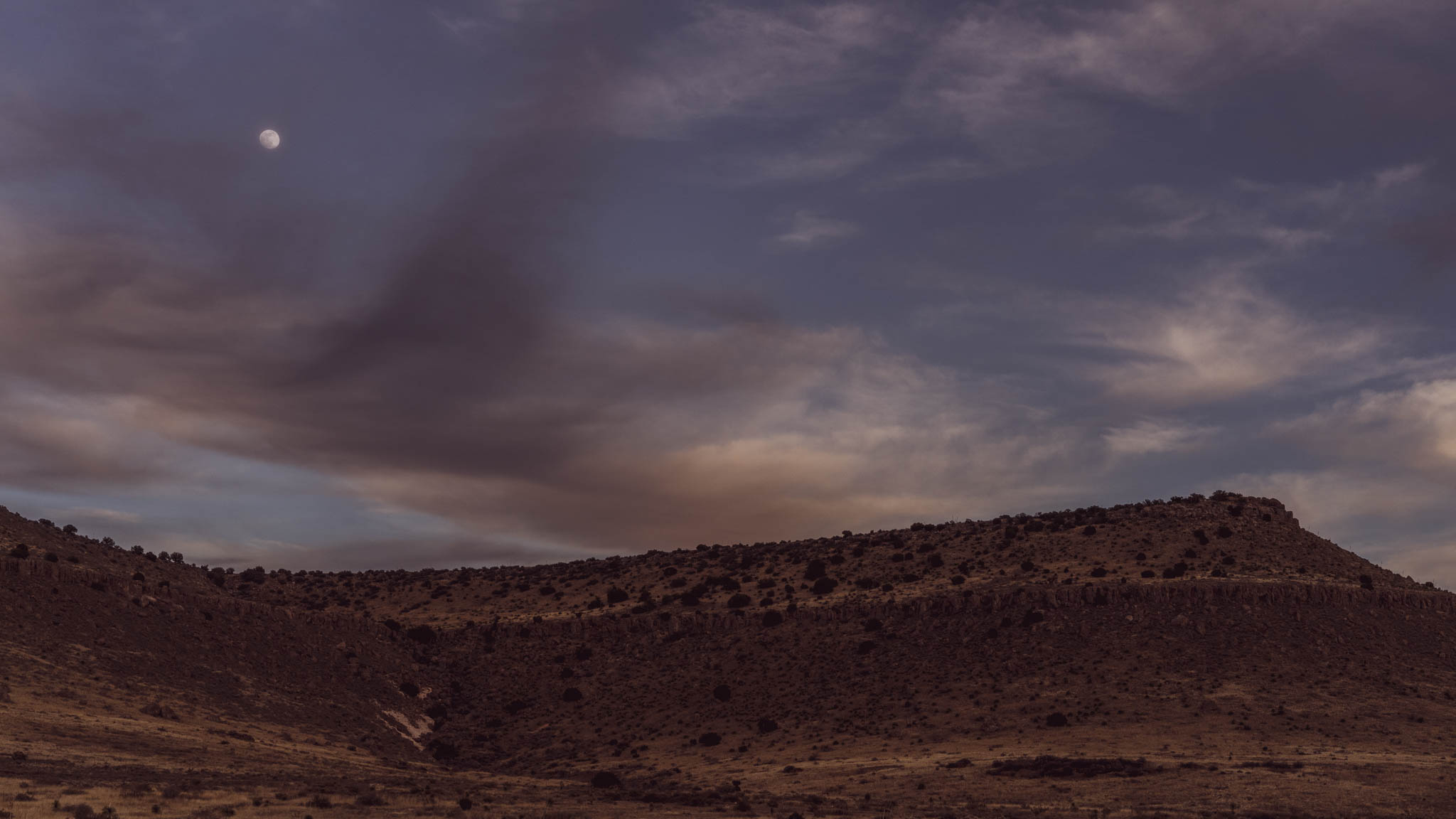 The only downside to my stay was the cold and wind of mid-winter. Most days, the temperature didn’t get much above 55F (13C) with nights near or below freezing.  I did sit outside sometimes, when I could position my chair in the sun and in the lee of the trailer to block the relentless wind. Despite the weather and lack of hookups, it was still worth the stay. I do love this place.

Who Lived Here? The Mimbres Indias settled here from 750-1250 AD. You can see conical holes in some rocks that are low to the ground, evidence of the seed grinding that the MImbres did. The Apaches came later, followed by the Spanish in the 1500s. By the early 1800s, the Spanish had started mining copper at nearby Santa Rita. After the Mexican War, when this land became part of the United States territory, trails near the park brought settlers and traders, until the railroad came into Deming to the south.

Want to know more about solar system walks? Enter “solar system walk near me” in your favorite map app and see what comes up. They turn up in surprising places. There’s even one in my current hometown of Gainesville, Florida.

What draws us into the desert is the search for something intimate in the remote.