Here’s part two of my late 2021 travels through my native state, wherein I travel south and then east on my way back to the southwestern deserts of Arizona and New Mexico. Warmer weather, cheaper gas, what’s not to like about that plan?!

The Immensity of California

One thing about California is that it’s a HUGE state if you’re driving north/south. I remember taking a trip with my nephew, Bob, from Seattle down to Hemet. We crossed the OR/CA state line (on I-5 if you care) and many hours later, I said “Oh, now I know where we are” because this was the intersection where I got on I5 from my old home in Santa Cruz. Bob asked how much longer, and I said, totally seriously, only more six hours. He slumped in his seat and muttered that he hadn’t realized how freaking big California was (and yes, he’s a native Californian like me.)

Getting from Santa Cruz to Arizona along my chosen route was about 670 miles. On the east coast, that much mileage can take you through 10 different states, from Portland, Maine through NYC and Washington, DC and on down to Richmond, Virginia. California is a looooong state, especially when towing, where I prefer to stay under 200 miles a day of driving, Growing up in LA, the land of freeways with people living in and around them, we always said a place was “45 minutes away” or ” 2 hours away” because it was how long it took you to get there that counted, not the raw mileage. I didn’t learn to use miles as a measurement of distance till I moved to the east coast when I was 25. True story.

Rather than take I-5, also known in my brain as the highway version of California Speedway, I prefer to travel up and down the state on Highway 101 (which sometimes shares space with Highway 1). It also means I get beach campgrounds, like Morro Bay and Point Mugu. And because the weather was forecast to be rainy on my planned travel day out of Santa Cruz, I left a day earlier. My reward for such quick thinking was a nice sunny day, with low traffic, and quite beautiful hillsides all the way down.

True to form, two of the three nights I spent at Morro Bay were cold and rainy, with a storm passing through for about 24 hours straight. I was impressed that one of the mountain areas received more than six inches of rain in that 48 hour period. My little campsite was, for a while, rather more like an island amid the puddles, but things did drain off pretty quickly once the storm blew itself over the coastal range and towards the Sierras. 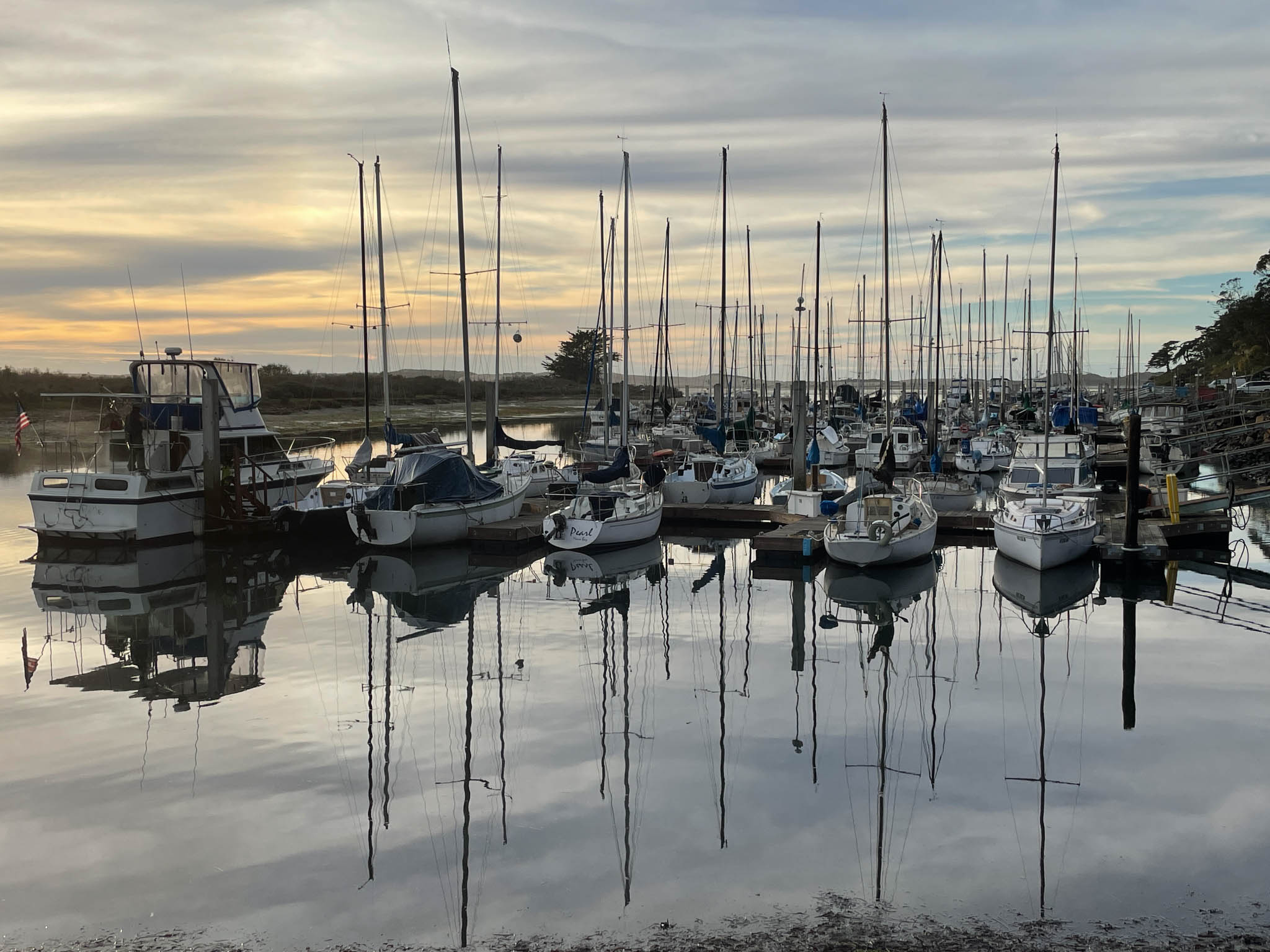 The weather was so miserable that even the herons had fled, their rookery by the water totally abandoned. I also chose not to kayak, although I had wanted to so that I could send a picture of that to my paddling buddy Alissa. We paddled here back in 2016, forgetting to check the tide tables and ended up slogging our butts and kayaks through some *very* shallow water. Ah, good times. (Also, my brain just went, wow, that was five years ago!)

My last beach stop for this trip was new to me, the Thornhill Broome campground that is part of Point Mugu State Park. Where the heck is that, you might ask? North of Malibu on Highway 1, south of Oxnard and Camarillo. And when I saw “on Highway 1” I’m not kidding. The traffic on that road whizzed by about 40 feet from the side of my trailer, with nothing but a chain link fence and some low sand berms separating us. So, it was a bit noisy during the day inside the trailer, providing strong incentive to sit outside and listen to the surf. 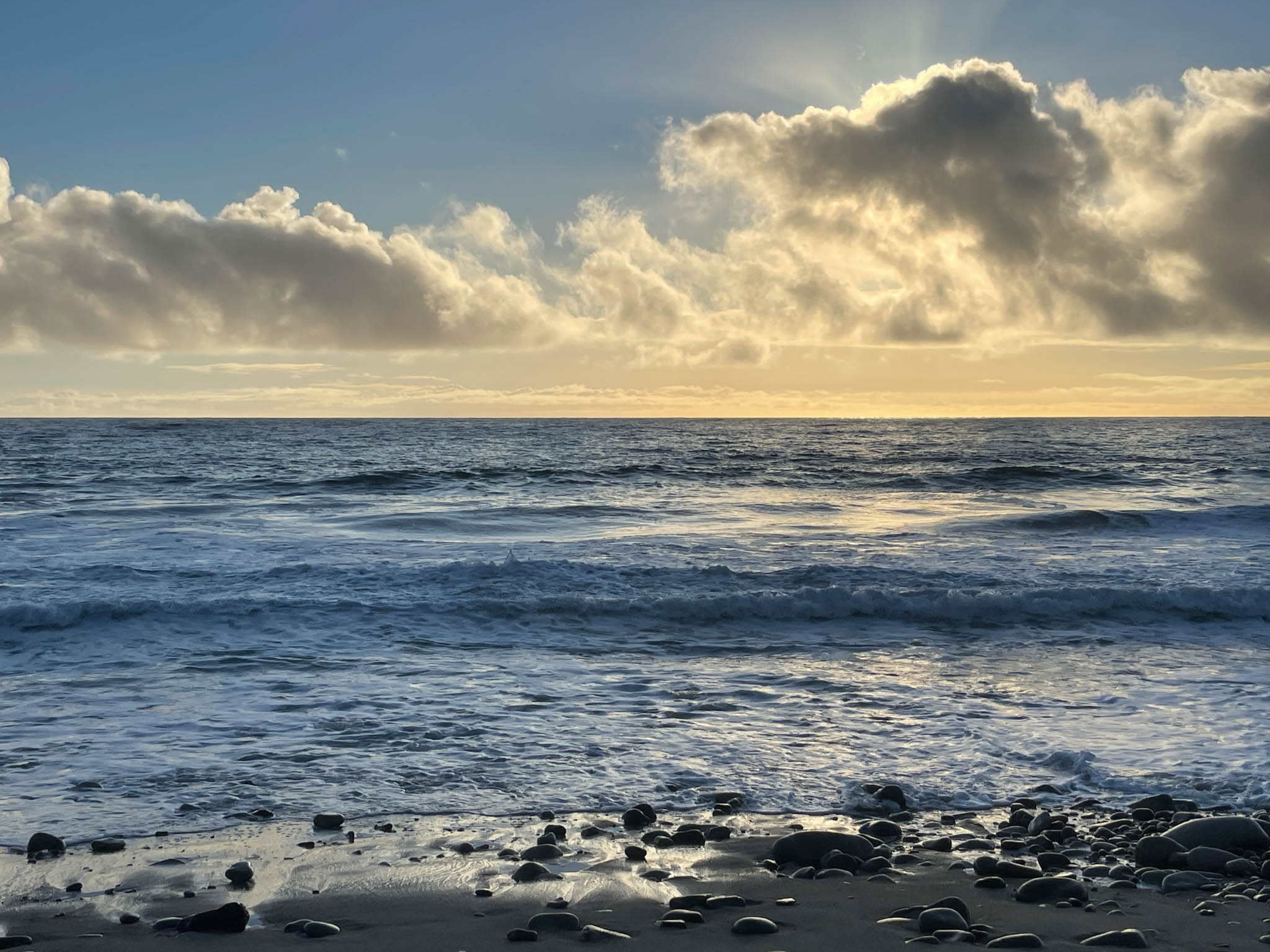 The coolest part of these beachside campgrounds (Emma Woods is another one, a bit farther up the coast) is that you can see pelicans flying from your window. Watching pelicans fly by while I’m making my breakfast is awesome. I sat outside one morning and just watched pelicans flying for an hour or so. I’m easily entertained by my favorite birds. 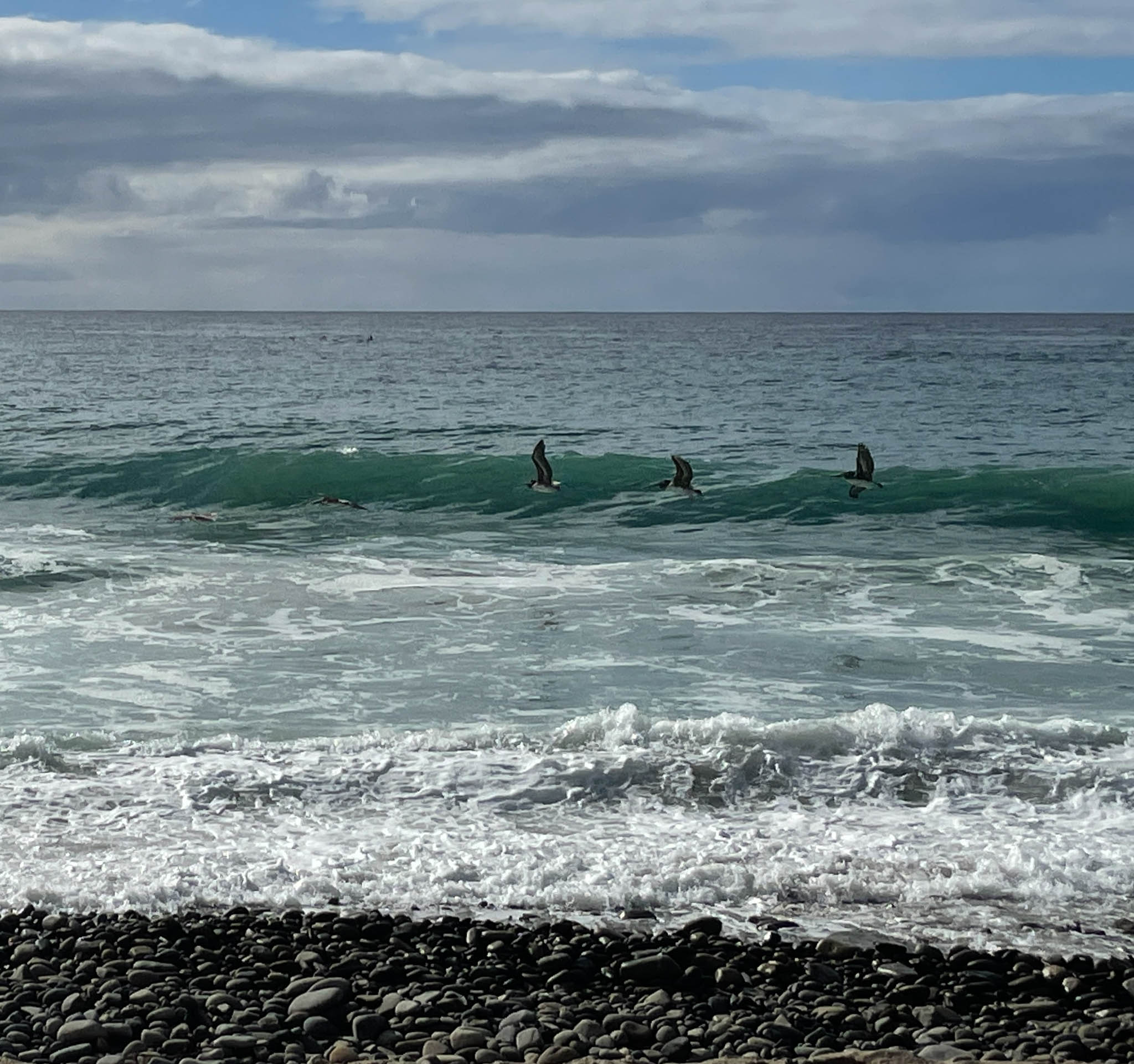 All too soon, though, it was time to leave the coast and head inland. Rather than drive Highway 1 through Malibu and into Santa Monica and across LA’s massive freeway system, I backtracked up to the 101 and took my familiar 134-210-10 route to get to my next stop.

The inside joke here is that my parents lived in Hemet their last years. After they had both died, I thought, wow, I’ll never have to come to Hemet again. Wrong! This is my second time back, partly because the Golden Village Palms RV Resort is really nice and close to some decent shops for stocking up and because it’s within driving range of some nephews and nieces.

The bad news is that one niece had a cold, then I got a head cold, so with (as the saying goes) an abundance of caution, we didn’t meet up this time around. Someday, when COVID is just like the flu (please, please…), we’ll be able to meet up and not have to worry about symptoms and self-tests and all the other stuff that is part of daily life right now.

One measure of how the pandemic has affected people is that this RV park is usually pretty packed in the winter, to the point where I scrambled to get a site my first visit. But with most Canadians choosing to stay home right now, the park was half empty. I had my choice of secluded sites, which was nice indeed. And I did get some supplies laid in for a window project I need to do, so that was good, too.

I took the back way out of Hemet, continuing my practice of avoiding interstate highways as much as possible. Heading to Anza-Borrego, I saw part of California I hadn’t even explored with my Dad, who was always up for a day trip driving around the back roads. And that last 7 miles or so into Borrego Springs? Wow, the road signs weren’t kidding about tight turns and downhill grades. I think I averaged 20 miles per hour, taking advantage of at least three turnouts to let the fast kids by me.

Whatever head cold germs I had weren’t giving up that easily, so I mostly took it easy and did little hikes around the campground between finishing off some books that were coming due. (Let’s just say that being able to borrow e-books from my library back in Gainesville no matter where I am located is one of the best things ever.) Gas wasn’t cheap here in Borrego Springs, but I did need some of it to get me to Yuma, where prices would be cheaper, so I winced as I pumped 5 gallons of $5.49 gas. Ugh.

My last stop in California was a good one, hanging out for free on BLM (Bureau of Land Management) land just north of Winterhaven. American Girl Mine BLM is well known in the full-timing community and now I see why. Tons of space so that you can spread out from everyone else, with beautiful views, starlit skies, and the lonesome roll of freight trains 10-12 times a day. Seriously, though, by now, I just sleep through trains so that part didn’t bother me at all. 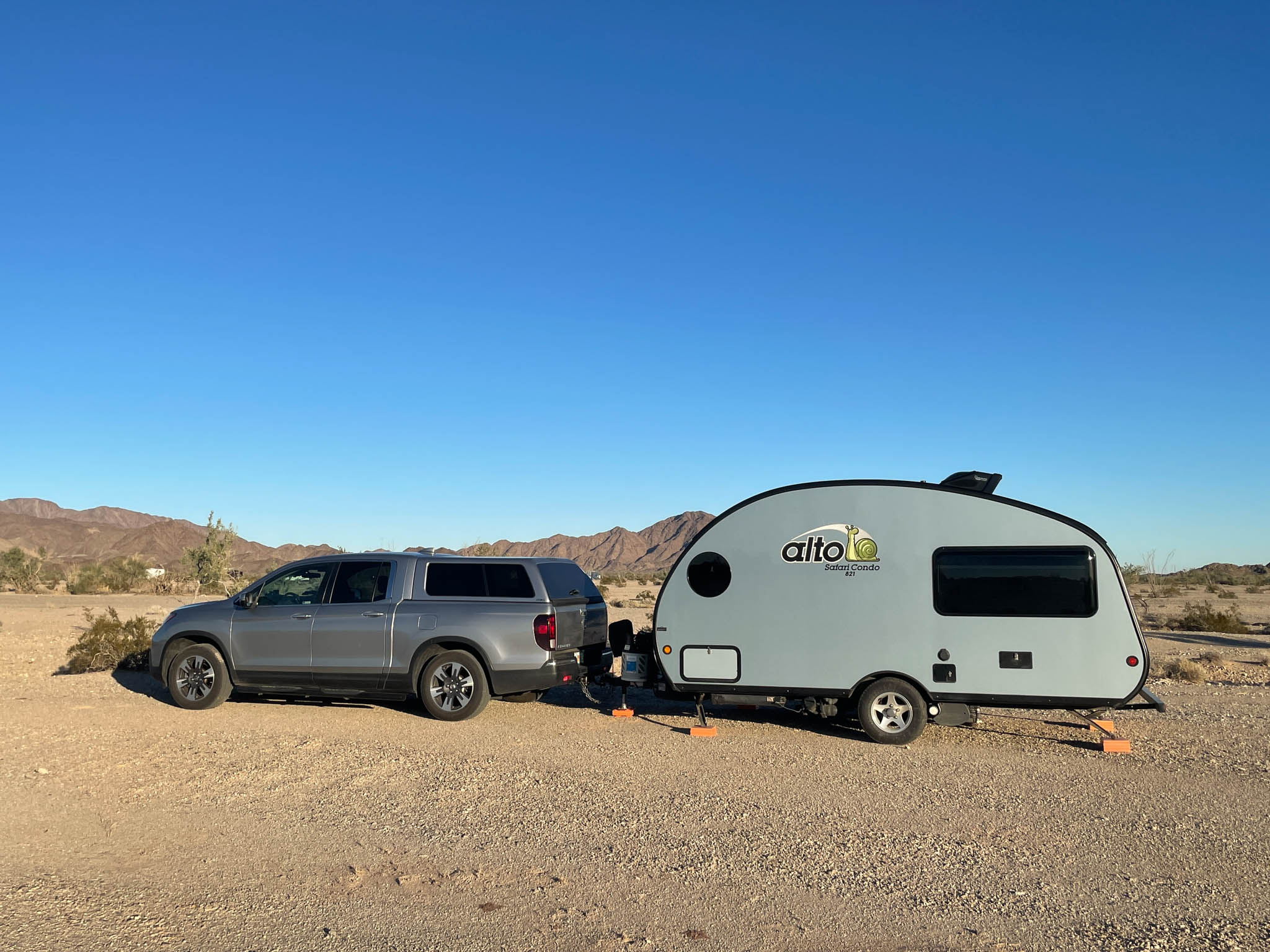 The sunset with the crescent moon overhead enticed the photographer in me to pull out my tripod and Sony A7 and spend about an hour setting up and then taking shots. I learned that my tripod can, in one sneaky setting, point the camera straight up at the sky, so now I want to play with some long night exposures on those moonless nights in New Mexico this winter. Meanwhile, here’s the shot I liked the best from the night’s effort. 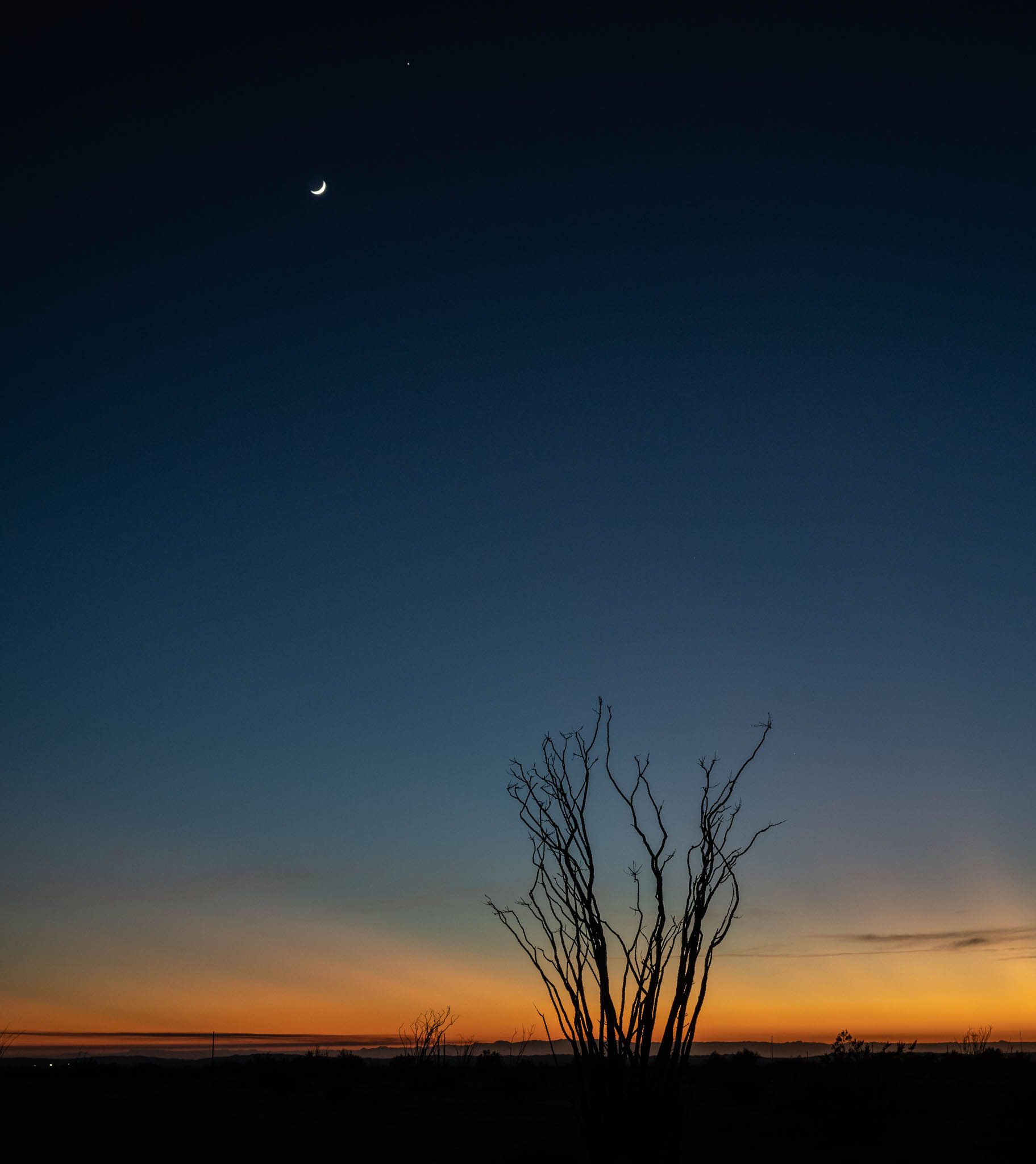 You only are free when you realize you belong no place — you belong every place — no place at all.