This is the third time in five years I’ve spent part of the winter in New Mexico, and it’s been – by far – the coldest one yet. I’m not alone in thinking this, though. My fellow campers have said much the same thing in our discussions the past week about how we fared in the cold. And by cold, I mean 15F (-9F) four nights running. Yikes… How did my Alto do?

When the weather forecast showed bitterly cold weather for that storm starting around February 2nd, the original radar projections showed central New Mexico (where I was) on the edge of the whole mess. The local forecast was a few nights around 20F and then warming back up into the usual low 30s overnight. How wrong that was! In the end, I experienced six nights between 15-20F, (-6 to -9 C) with daytime temps barely reaching into the mid 40s (around 7C) most of that time. So, yeah, super cold.

Despite anxious nights and obsessive checking of pipes and water pressure, the Alto plumbing survived surprisingly well. My water pump, which had been slowly failing, did fall victim to the cold, with a cracked filter, so I ended up replacing it (details below).

The best thing I ever did for cold weather was cover every inch of piping I could reach with 1/2 inch foam piping insulation, picked up from Home Depot. I zip-tied insulation to the plumbing lines that run underneath the Alto (moving freshwater from the tank to the hot water heater and kitchen area). Inside the Alto, I have the same insulation on the pipes coming up to the water heater and all the pipes in and out of the water pump. I installed the under-Alto insulation in May 2016, so I’ve definitely gotten my money’s worth out of it!

Fancier rigs, built for winter, have skirts you can buy that cover the area from trailer bottom to ground, creating a warmer space underneath the trailer, which is where the water tanks are hanging out. Four-season trailers either have a thick layer of foam insulation over the tanks, or a second floor, so that the tanks are fully enclosed. And they usually have tank heaters.

My Alto is a three-season trailer, so it doesn’t have tank heaters, enclosed tanks, or a fancy skirt. So I took a tip from the weathered rPod trailer down the row and created my own skirt with the materials I had on hand. This was one time I wished I was near all those farms and hay bales I saw last year, because hay bales would have made an awesome skirt.

Keeping the Inside Warm

The water pump and most of the inside plumbing is inside cupboards (kitchen and under the bed) so it can get really cold in those places. I leave the cupboards open 4-6 inches when outside temps go near or below freezing to keep the pipes and pump warm. This round, though, with temps predicted to be so much colder for longer than I’d ever experienced, I bought a $20 space heater from Walmart. I cleared out the front half of the underbed cupboard and aimed the heater at the water pump and surrounding pipes. My experience from last November, when one night of 15F low turned the water into slush had me nervous enough that I went with the space heater this time around.

How Did It Go?

I had filled up the fresh water tank and then drained off a bit of that, so it never froze, as it turns out (much to my relief). I think the skirting helped block the bitterly cold north wind, along with using the Ridgeline as a windblock in front of the trailer (which was pointing north because that’s the site orientation here).

The pump didn’t fare so well. It did keep working enough that I could move water from fresh water tank to each outlet (sink, toilet, shower, etc.) so I knew the pipes had survived without major damage. But… the water came out with a lot of air, so it was endless series of sputters and spits rather than a smooth flow of water. Sigh. Googling youtube videos suggested a few things to try but none of them resolved the issue. So I bit the bullet and called the only RV repair shop within a 30-mile radius. The guy that answered listened to my plight and I could almost see him nodding his head as he said he’d already replaced a few pumps this week. He had a pump and availability, so I hitched up and headed north 25 miles to O’Neall’s RV Repair in Elephant Butte.

He found the filter was cracked, and replaced it. At that point, the water was flowing, although the pump itself was a bit dicey. Almost six years old, with constant use since I’m a full-timer, it sounded like it was struggling every time I had used it the last few months. So I deicded to have Rick go ahead and replace it. I trusted him and — as full-timers know — the next place down the road might not be as good or have a pump. Better to get it done now and call it preventive maintenance. Living in a trailer without a good water pump isn’t all that fun. Now I have shiny new water pump and I realize how bad the old one had gotten.

What About Next Time?

I don’t plan on camping in such super-cold temps again but the vagabond life can be unpredictable so it’s best to be prepared. What would I do differently or in addition to this round’s actions?

The obvious answer would be to move to a warmer location. This time, that wasn’t an option because it was the same bitter cold 200 miles in every direction. From Big Bend to eastern Arizona, it was all going to be cold and miserable. Because the original forecast was for only 2-3 nights of that cold, I figured I could get through it. (And it’s not like I believed just one forecast, I actually have four different weather apps I consult and all of them underestimated the depth and duration of this cold snap.)

I bought an extra filter for the new water pump, because that’s the weakest point (the first to crack in the cold, as it turns out) and also the easiest and cheapest to try when the pump is struggling. It’s smaller than a baby’s fist, so easy to store in my bin of spare parts (yes, I have one one, thank you very much).

I thought of buying tank heaters that you can stick onto the bottom of your tanks and plug into 120v outlets, but it turns out that no one could deliver them in time. Would I buy them now? No, because they’re kind of big and awkward to store. But, and this is a huge but, if I had enough warning of stupidly cold weather, I’d order them delivered to a UPS outlet and pick them up. The rPod guy installed some and said they worked well, although the middle of them didn’t stick as well so he recommended applying them very carefully to super-clean tanks. The thought of scrubbing the outside of my tanks while laying underneath them doesn’t excite me at all.

Closing Out the Cold Snap…

… by reading the new pump manual and having a drink. I think I deserved it after this past week! 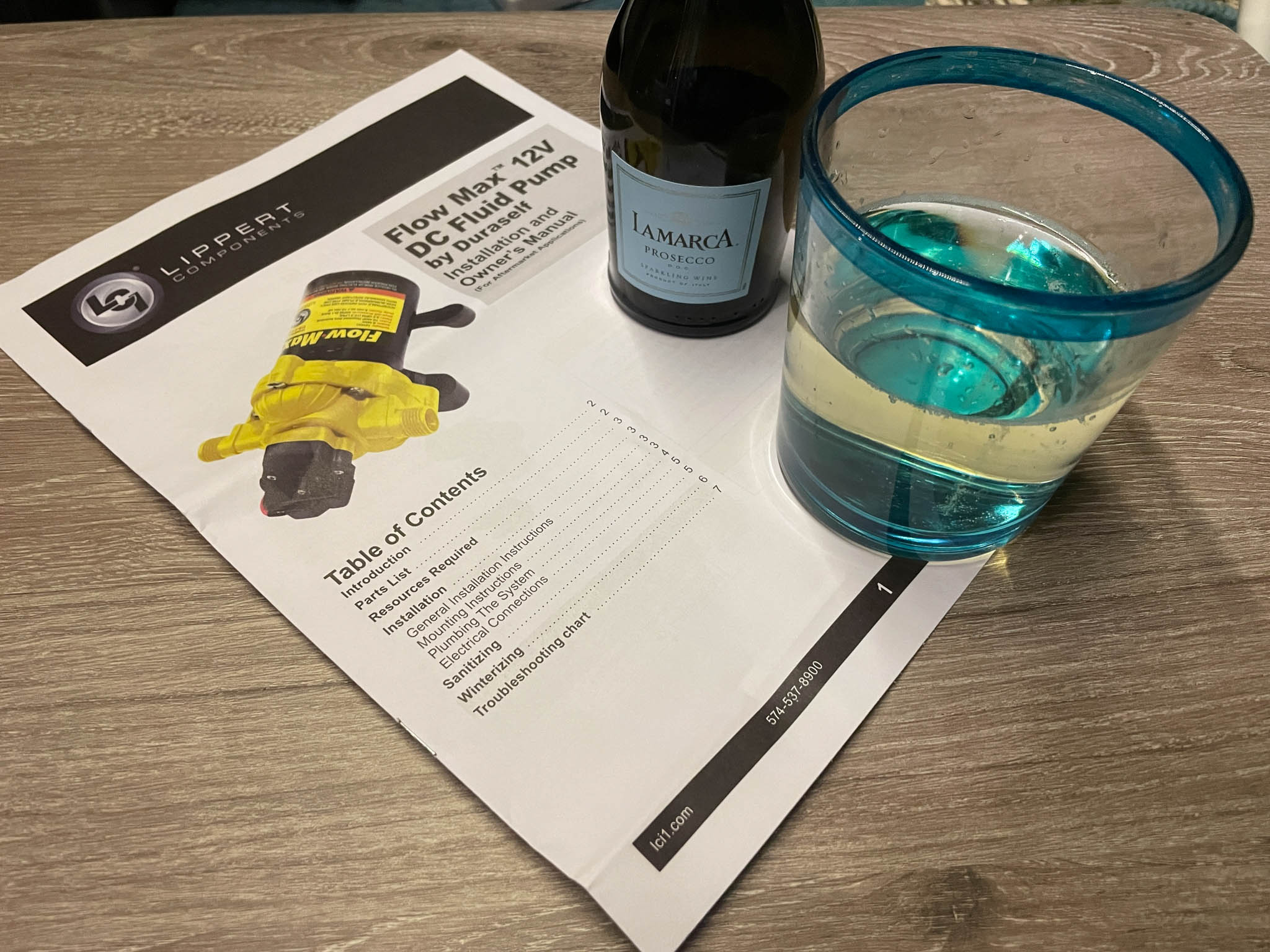 Let me be the first to tell you, drinking alcohol is the worst thing to do in cold weather. Hot soup is the best because the process of digesting food helps to warm you up.

(I’m going to respectfully disagree with Mr. Freeman on this occasion.)