With my Great Lakes tour done and family time in Wisconsin completed, it was time to point the Ridgeline west to Colorado, via North Dakota, South Dakota, a night in Wyoming, and then on down to the Denver area. Here’s a summary post of my adventures, with links to blog posts that dive deeper into places. 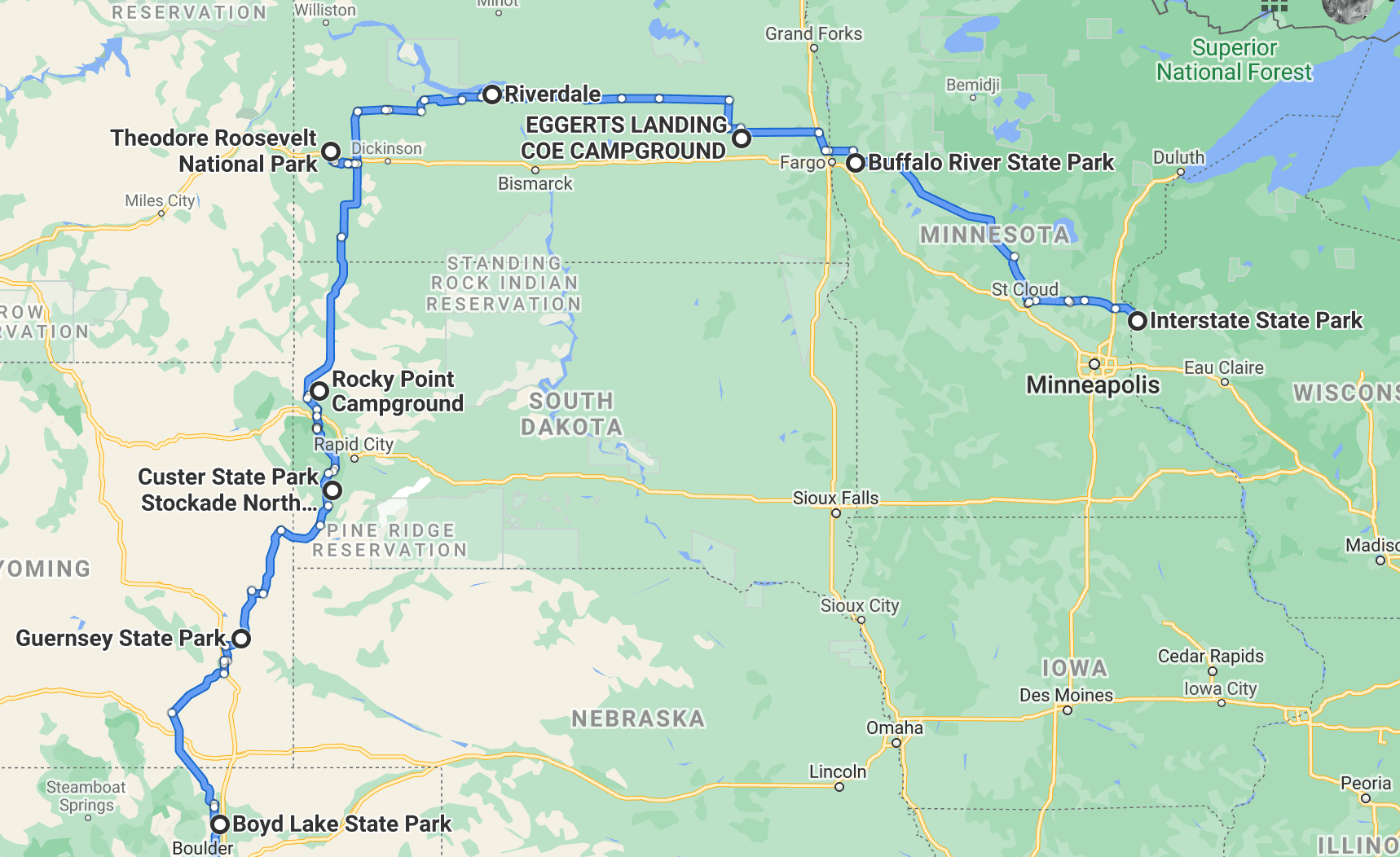 After a one-night stop at an RV park to meet up with some old friends (Hi, Mary and Ben!), I pointed myself to the western edge of Minnesota and the grasslands of Buffalo River State Park. My campsite (#16) on the end of a row had a huge grassy area so it was actually pretty perfect for sunsets and night skies. I spotted Jupiter late one evening as well as the Summer Triangle overhead and the Big Dipper and Arcturus sinking down into the west by midnight. 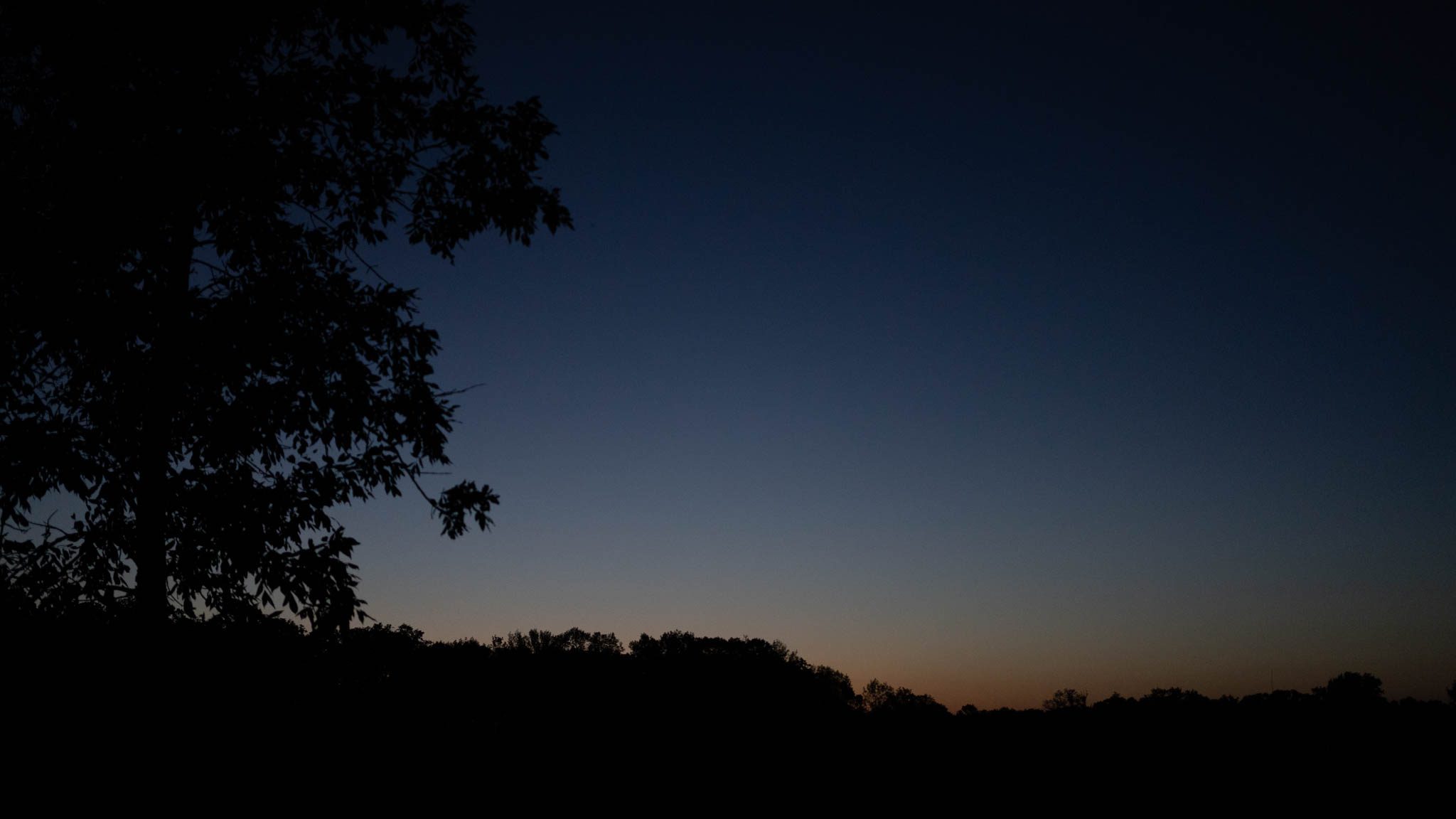 The thing is, I don’t do heat well, and it was over 90F every day, so other than short morning hikes, I was mostly hiding out in the shade, switching to the Alto air-conditioning by mid-afternoon into the night. The lows were in the mid-70s, and I wasn’t acclimated to this yet, so it was definitely different.

The treat here was being at the start of the great plains that make up the middle of the continent. After months with trees and forests, I could now see the horizon in every direction. It made for some great photos when combined with the ever-changing weather. 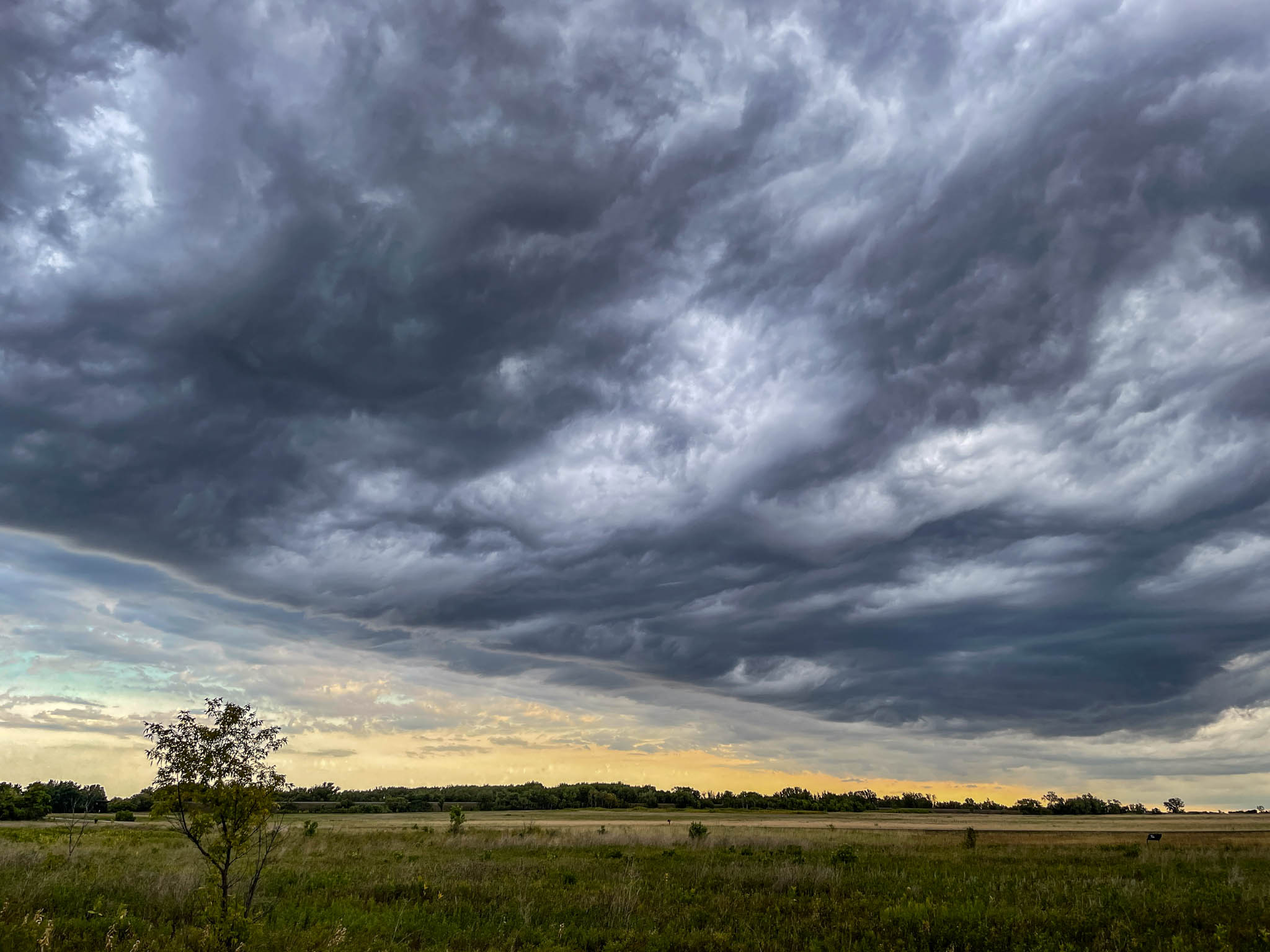 It can get REALLY hot in August in North Dakota. Like 100F hot, and with winds that strip all the humidity out of the air. My weather apps sent me even more wind/fire warnings and a few air quality warnings as well. So rather than go kayaking or find a hiking trail, I did a lot of indoor activities, like reading, watching old movies (and when I say old, think Jimmy Stewart, Katherine Hepburn, and Marlon Brando), and quilting. I did take a few short hikes, mostly looking for textures that would work for the week’s 52 Frames challenge, texture.

Instead, I explored the high line railroad bridge in Valley City. It’s so cool that it got its own blog post: High Line Bridge, North Dakota. 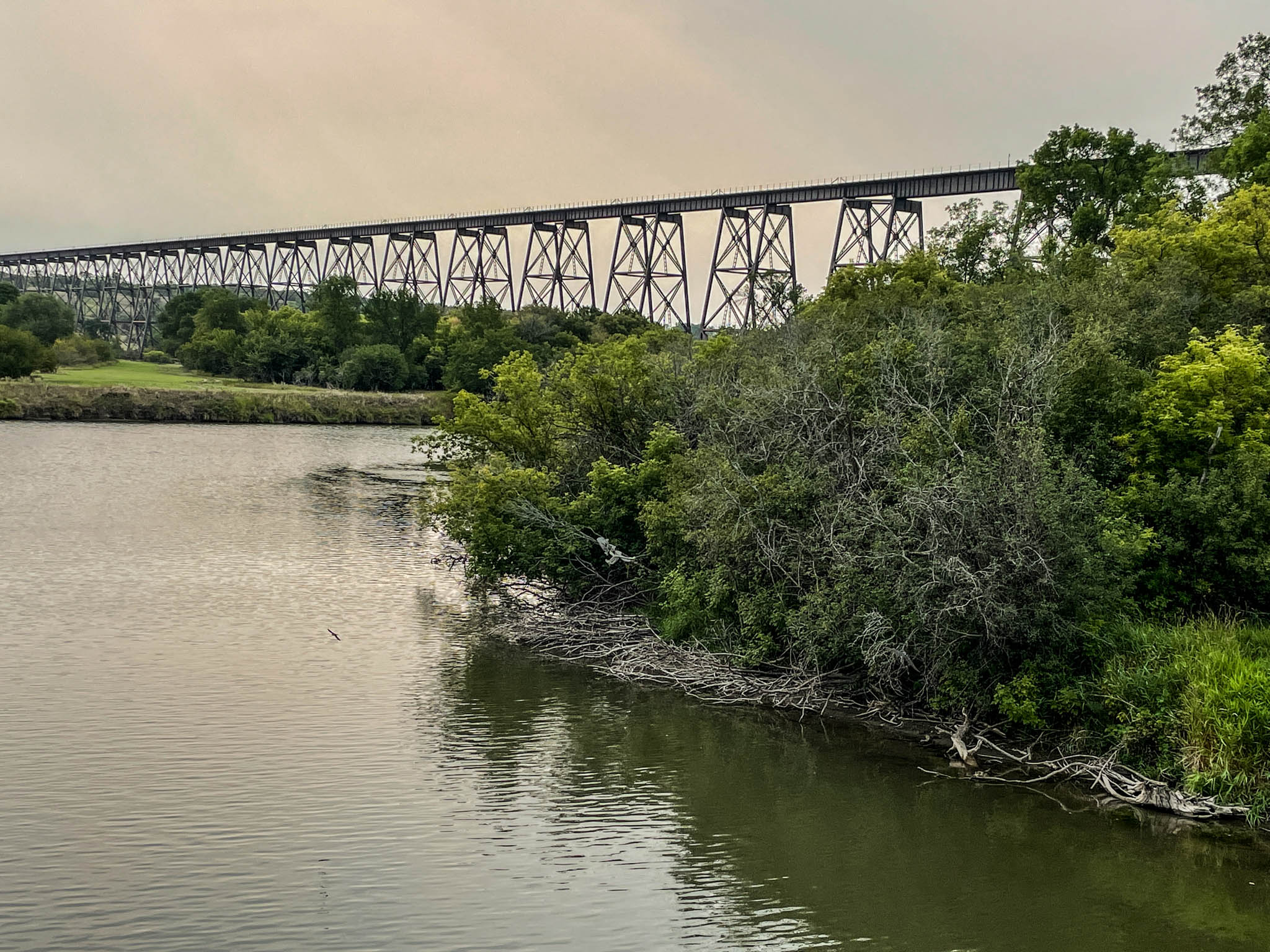 Ah, the plains. I get it now. Big horizon = wind. Lots of wind. LOTS of wind. I got shut out again in my quest to kayak in North Dakota. But it wasn’t a total loss. The campground was downstream from a small dam so I got out the camera and played around with the transmission towers (which I used to call “the cats” when I was a girl in SoCal watching them go by the windows as my Dad drove us from LA to Arizona to visit my grandparents). 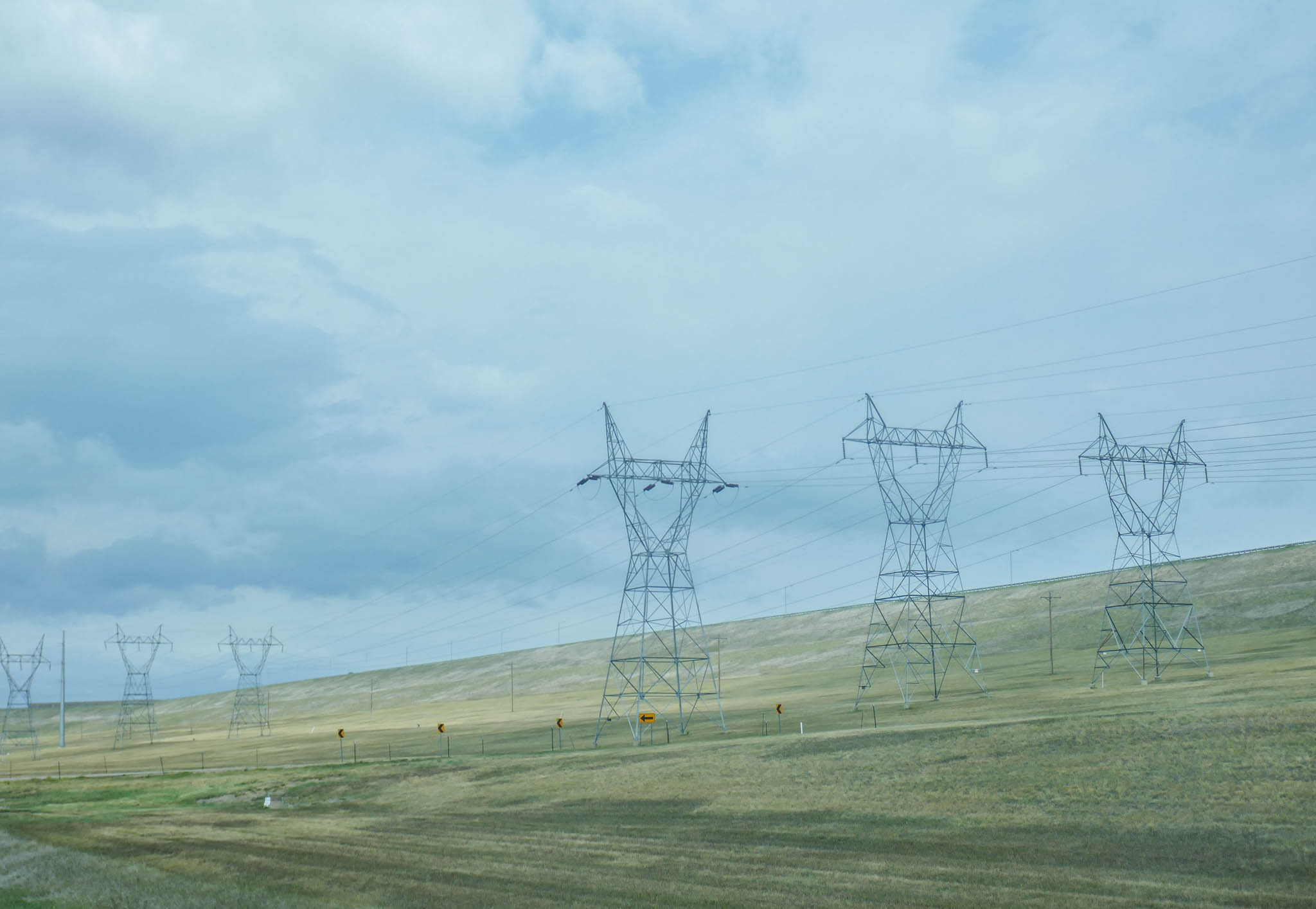 The dam itself was pretty cool, too. Not huge and there was no water going through it, but I did like this angle of it. 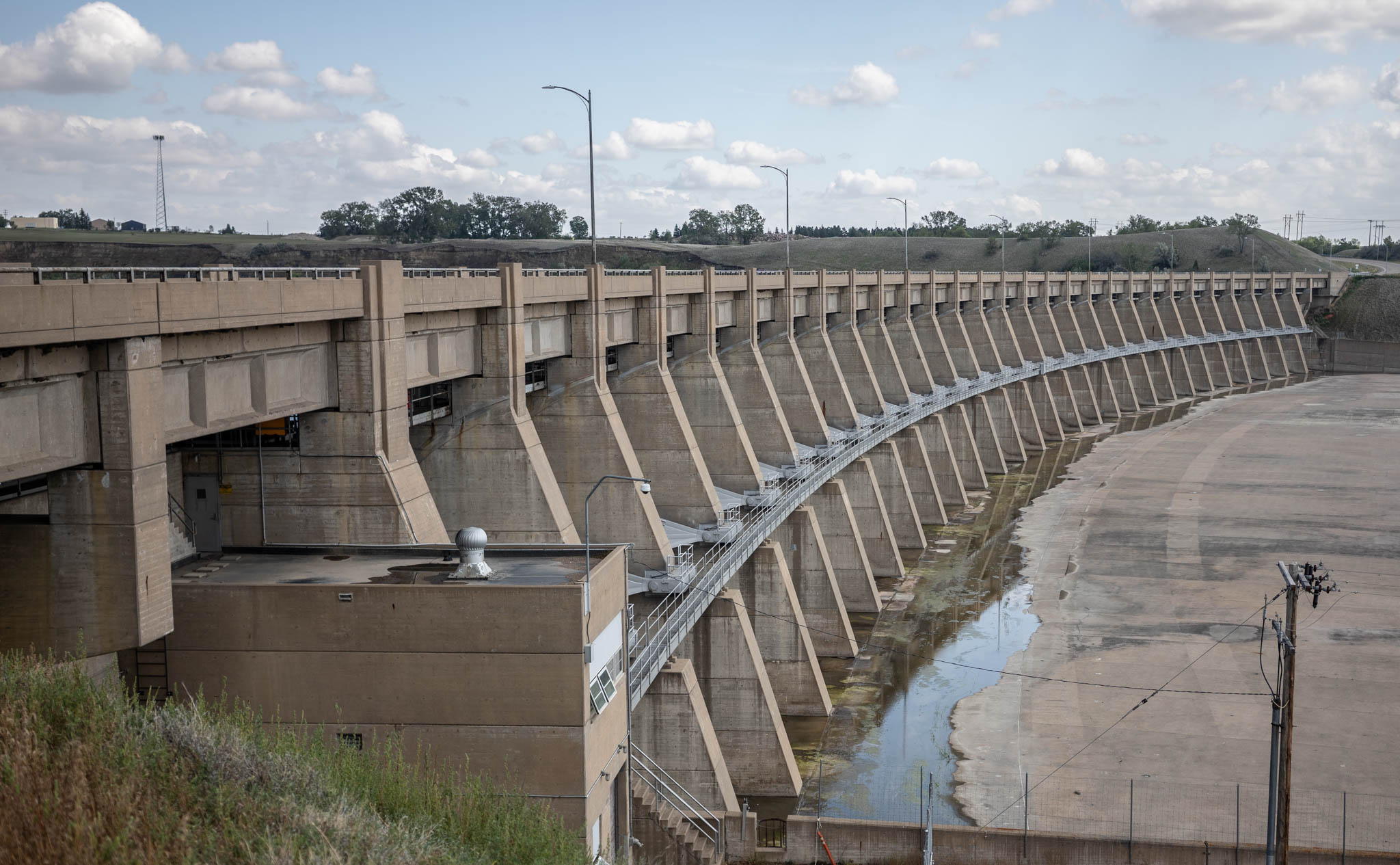 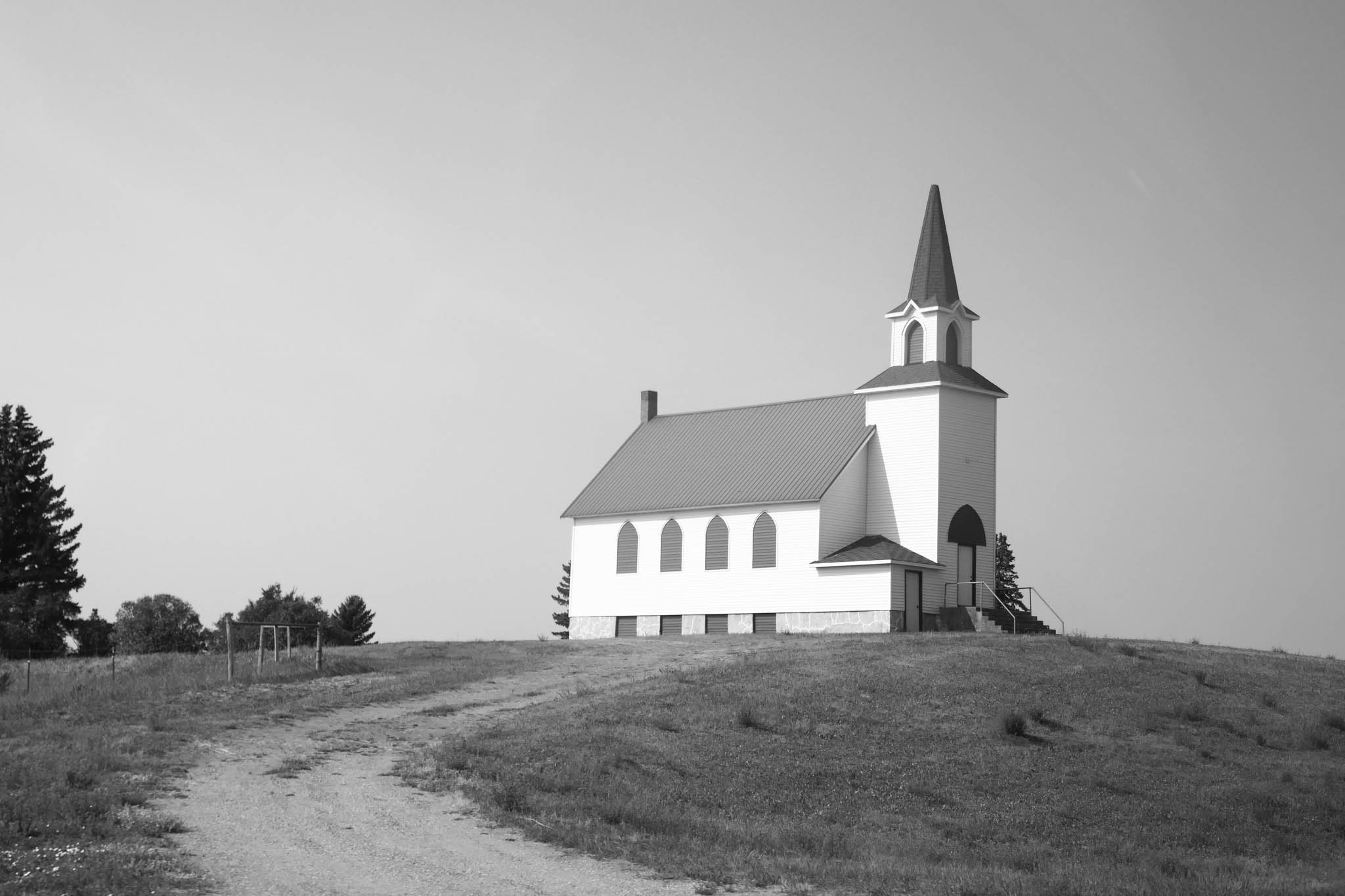 My original plan had been to dry camp at a walk-up spot at Cottonwood campground inside Theodore Roosevelt National Park. It seemed like a good plan until a few months ago when the summer temperatures routinely hit the 90-100F range. Yikes. I lucked out and found an electric site south of Medora, at Sully Creek State Park. Basically an open field, where the wind raged most of the daylight hours, but it had power and that meant I could run the air-conditioning in my Alto. Which I did. A lot. It was 90F when I got there and the next day was 91F. When you live in a tin can of a trailer, temps like those pretty much demand A/C. The view was amazing, though, so I’ll call this campsite an overall win. 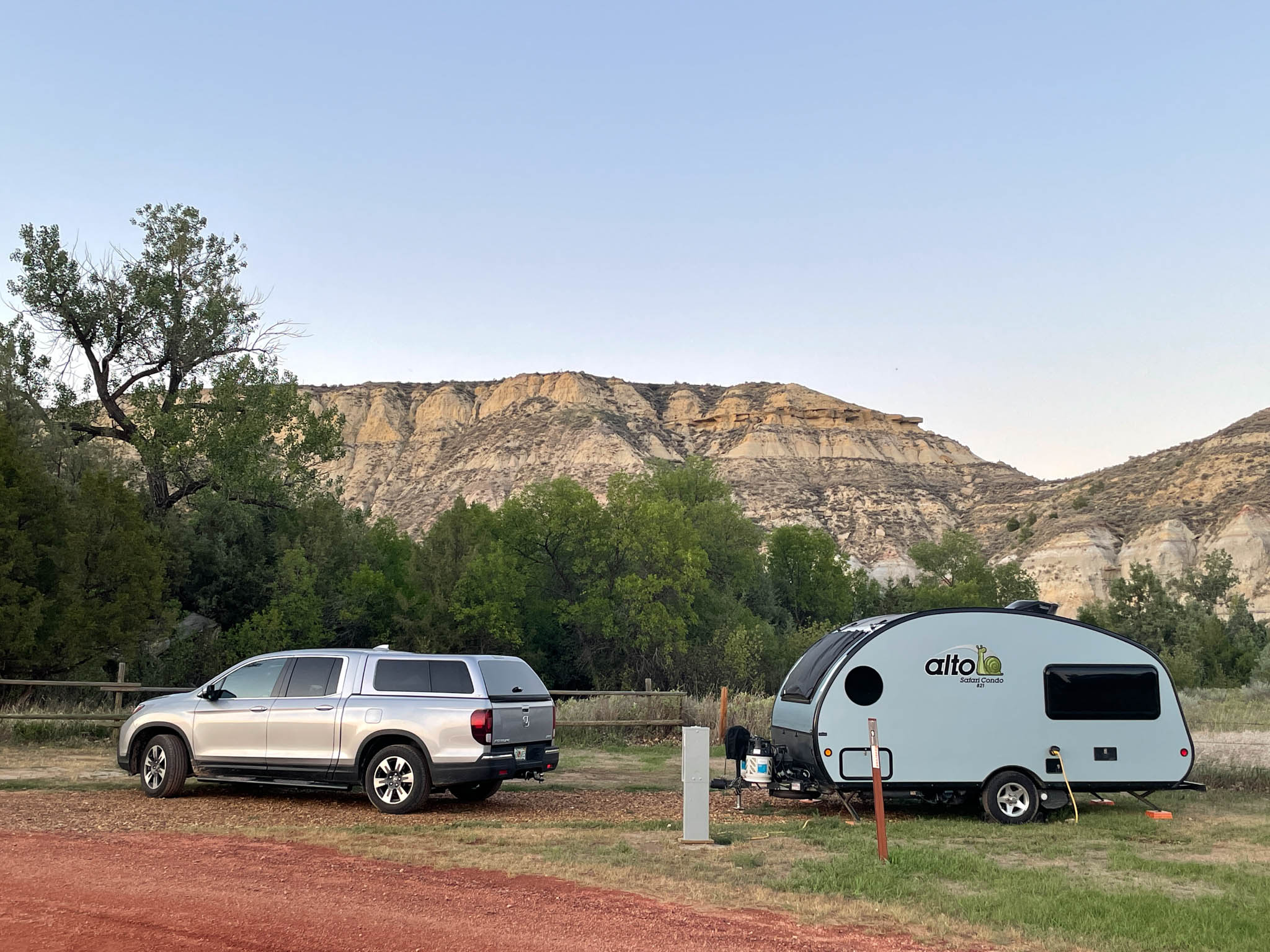 Theodore Roosevelt National Park (TDNP) was one of the biggest surprises in my five years of traveling. I originally decided I had to visit after reading Terry Tempest Williams’ book Hour of Land, and its chapter on TDNP. It took me a few years to get to this place, but when I finally did, I fell in love. Hard. This is one of the most beautiful, stark, quiet, and varied places I’ve seen in my travels. And I’m definitely coming back. As a photographer, I found the light magical in morning and evening and I’ve got a list of what I want to photograph and when next time. And I’ll come when it’s not high summer and stay at Cottonwood so I have less driving to do to get to places inside the park.

Five years ago, on my first trip with my Alto, I stopped here for one night on my way west. It seemed to close a circle to stop here again, this time headed south. It was windy and cold five years ago as I lay on the rocky ground zip-tying foam pipe insulation to the exposed water pipes under the Alto. I was preparing for a few nights at Yellowstone, where it did indeed snow on me and go below 32F overnight, so the pipe insulation was a good idea. It’s also still there. Same stuff, five years on, is still hanging on, despite almost 50,000 road miles. 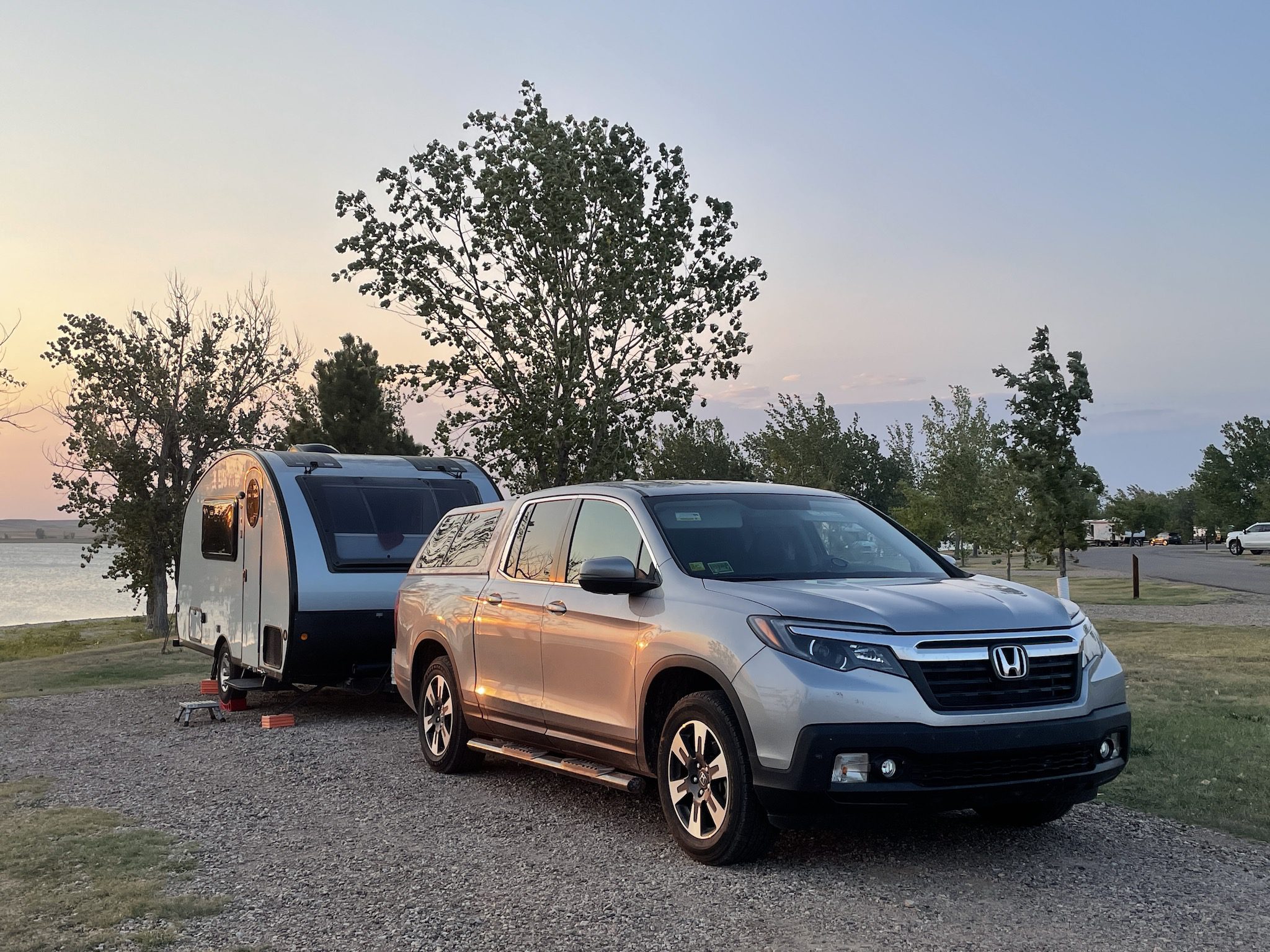 This time, it was windy and hot with 25 mph winds, gusts up to 35 mph. The temperature didn’t dip below 80 until almost midnight. I can’t figure out why anyone would live in a place like this. The howling wind in these plains states is definitely not my cup of tea. The sunset was pretty, though. 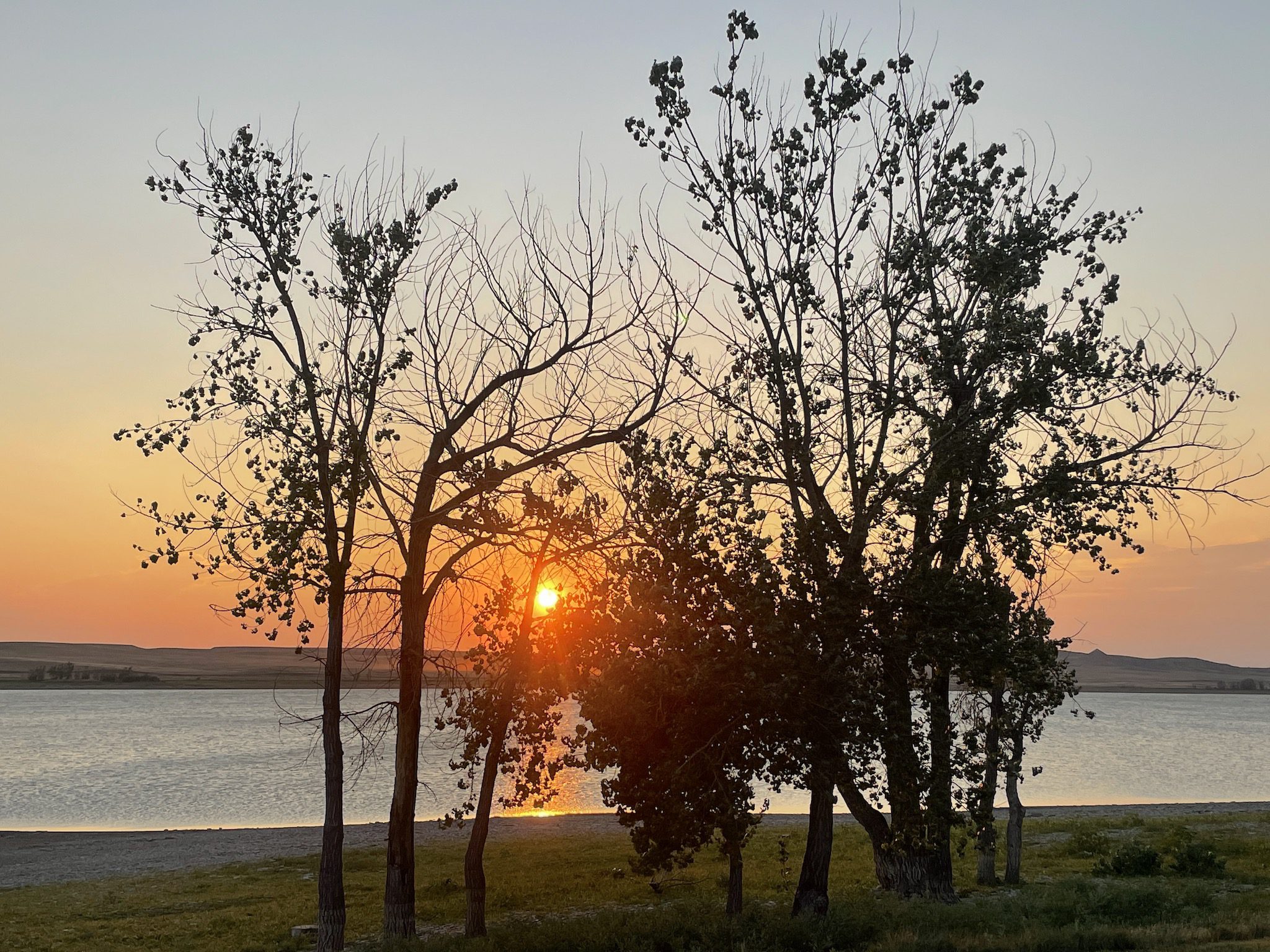 Belle Fourche is also (one of) the center(s) of the US, so I had to visit that and then wrote about it: Finding the Center.

Continuing my southward trek, I avoided the interstate (and Sturgis post-motorcycle rally) by going up into the mountains. First fun sight was an antique car show in Deadwood. Nowhere for me to park my rig but a long stoplight provided time for me to enjoy the tricked-out cars. 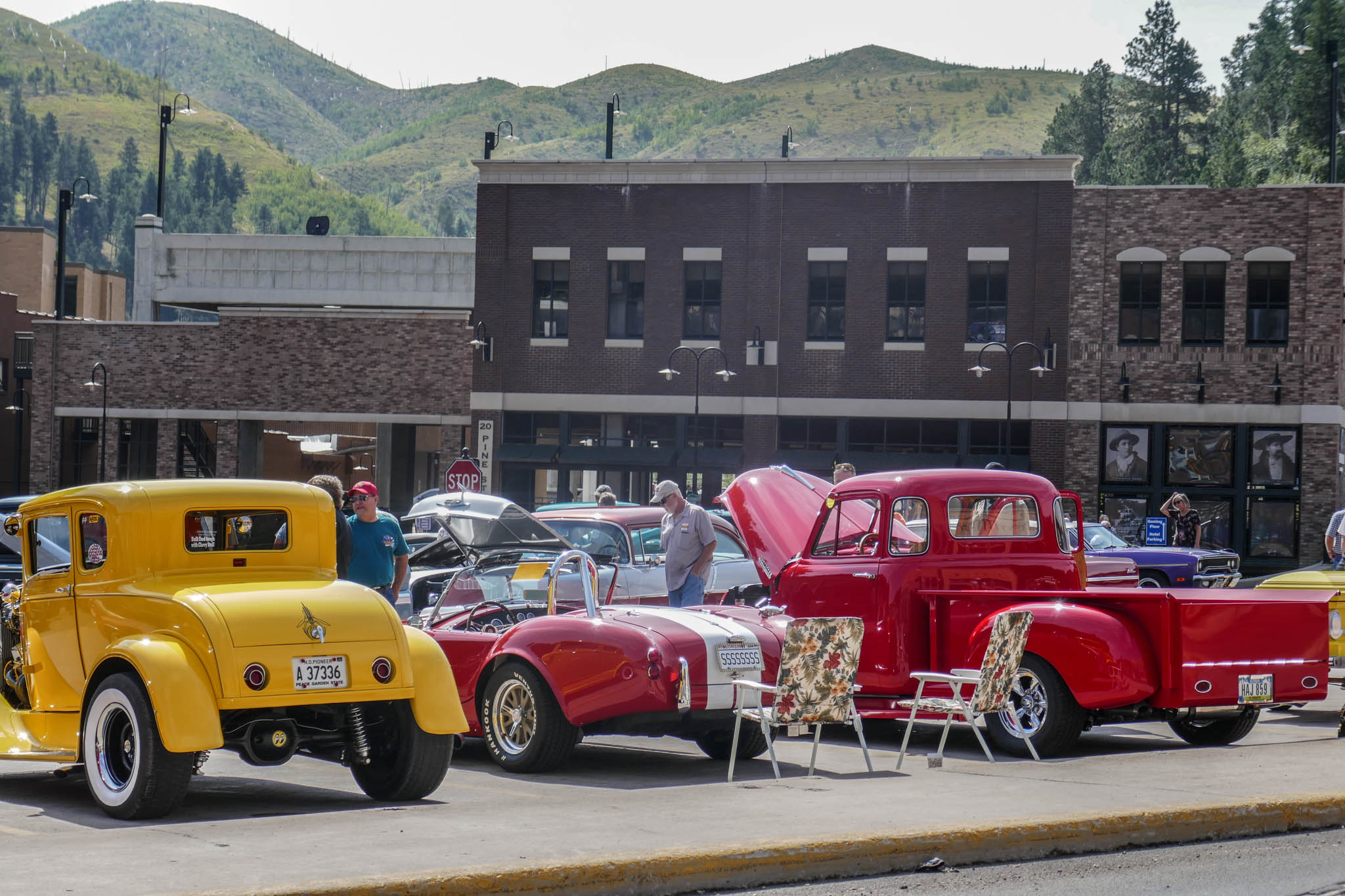 As I climbed up in elevation, I rolled down the windows to enjoy the fresh air. And then it hit me: the smell of dry mountain air and pine trees. The smell of home. I felt my tension and anxiety melt away as I breathed in that air. After more than two years, I was back in the region that defined my childhood, from Yosemite to summer camp. Words really can’t express how happy I was just standing at the rest stop breathing in those smells. 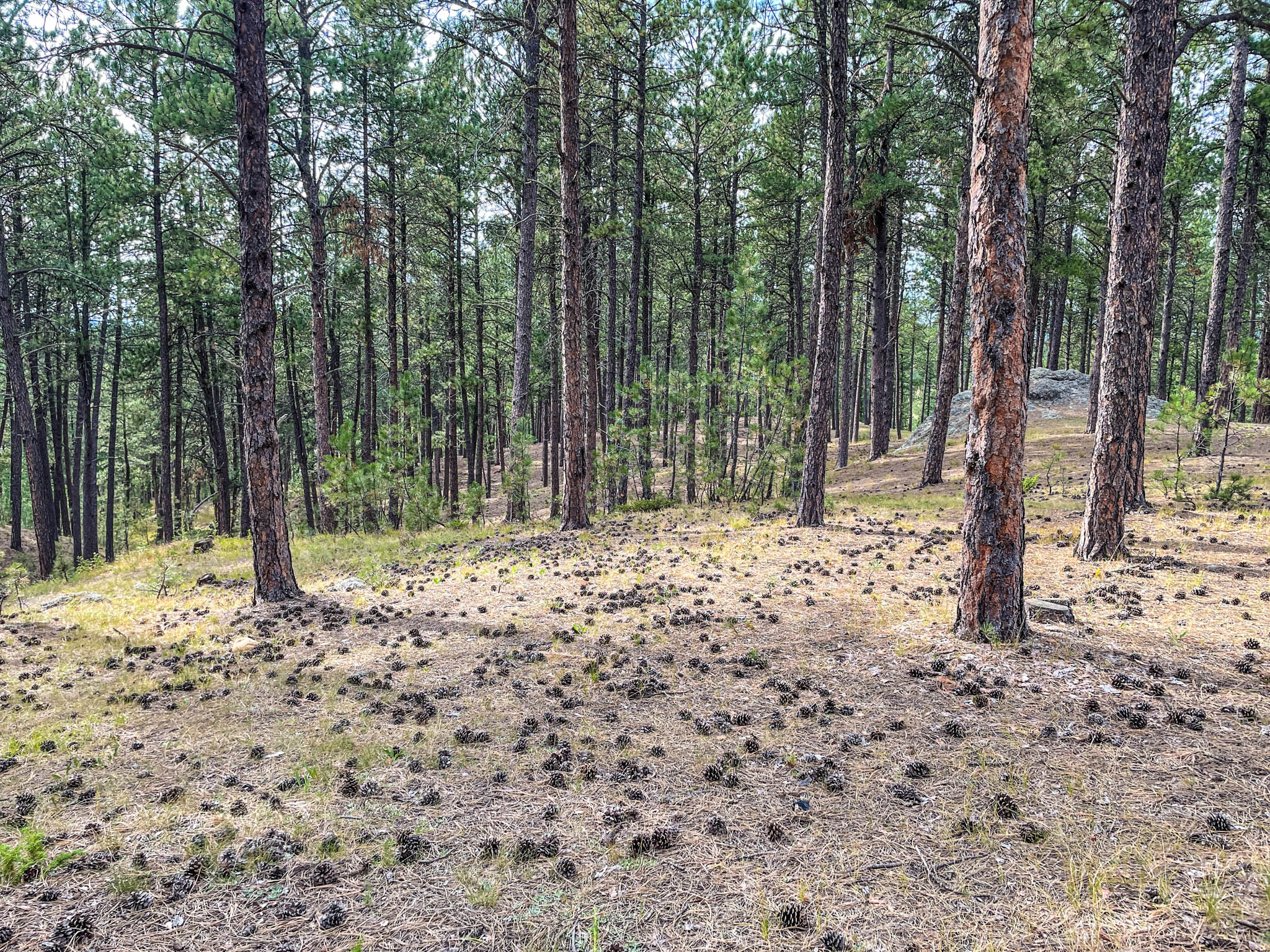 There must be something about putting small planes on tall poles that appeals to people in this section of the country. From Bowman to Hill City, it seems to be a trend. 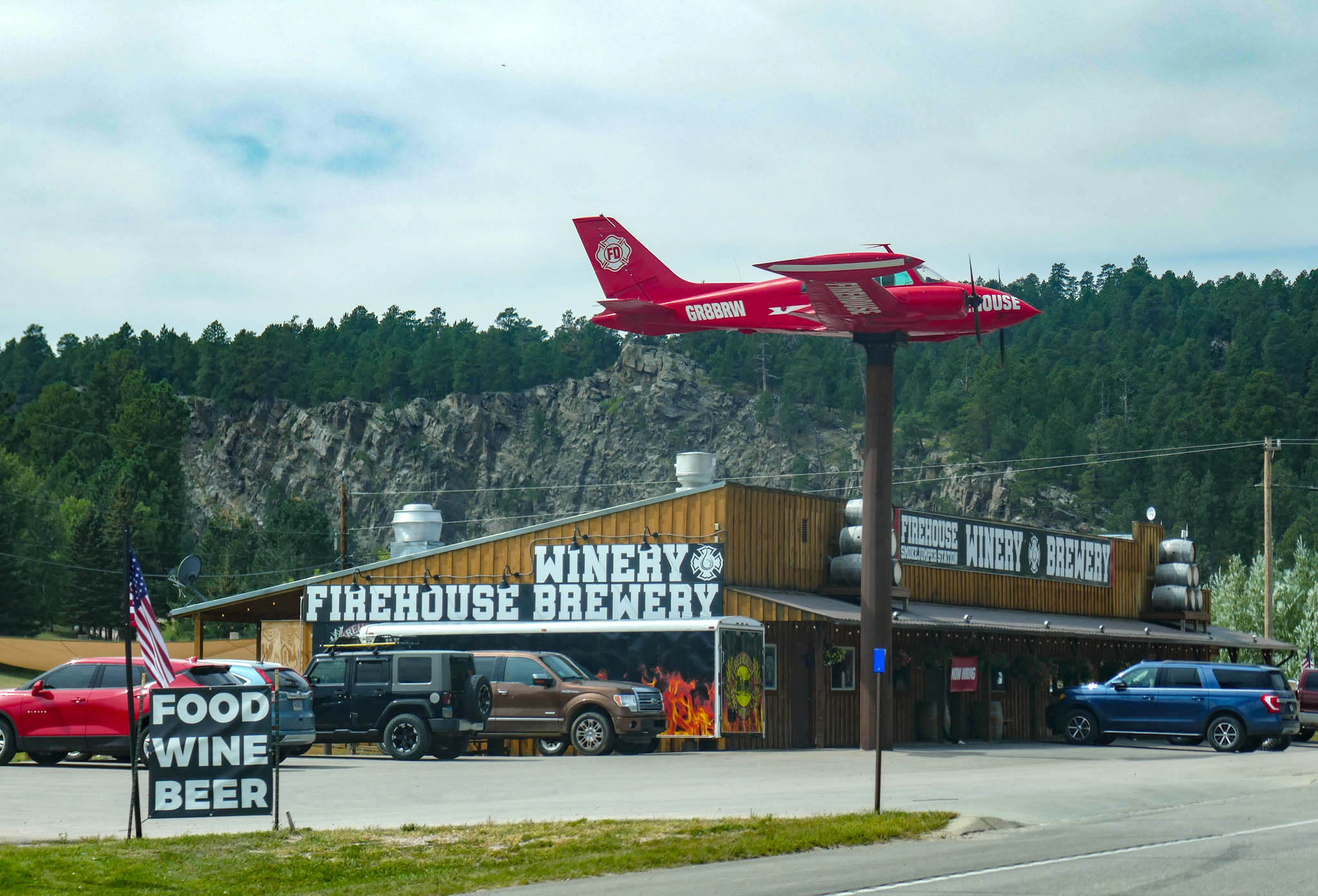 The big stop for me was Wind Cave National Park, which I thoroughly enjoyed despite the crowded tour conditions (at least everyone was (mostly) masked. 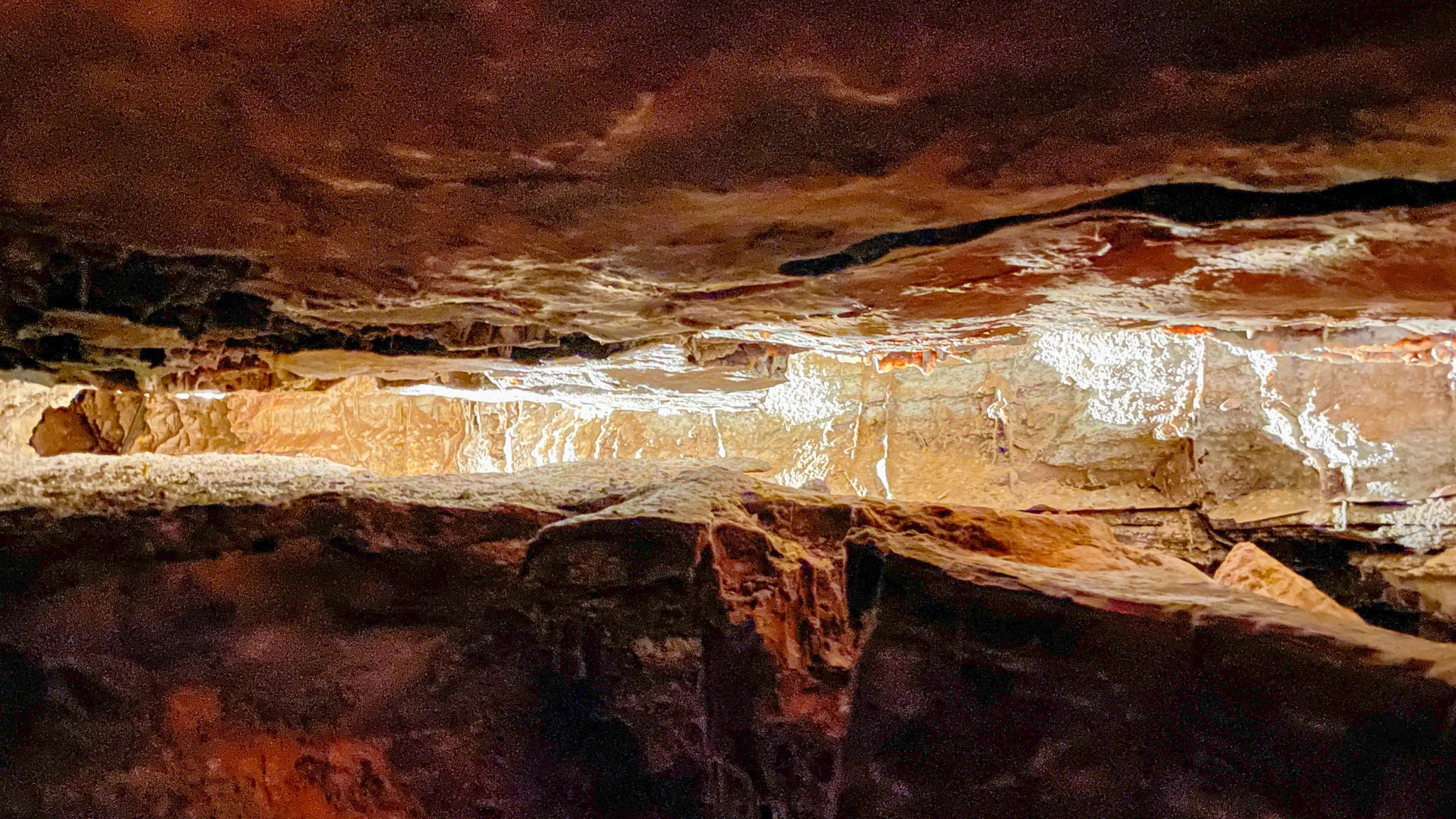 And, yes, I saw “the heads” of Mount Rushmore. I’d seen them before, decades ago, but as I was driving by doing a scenic tour of the Black Hills, I figured I’d visit them again. 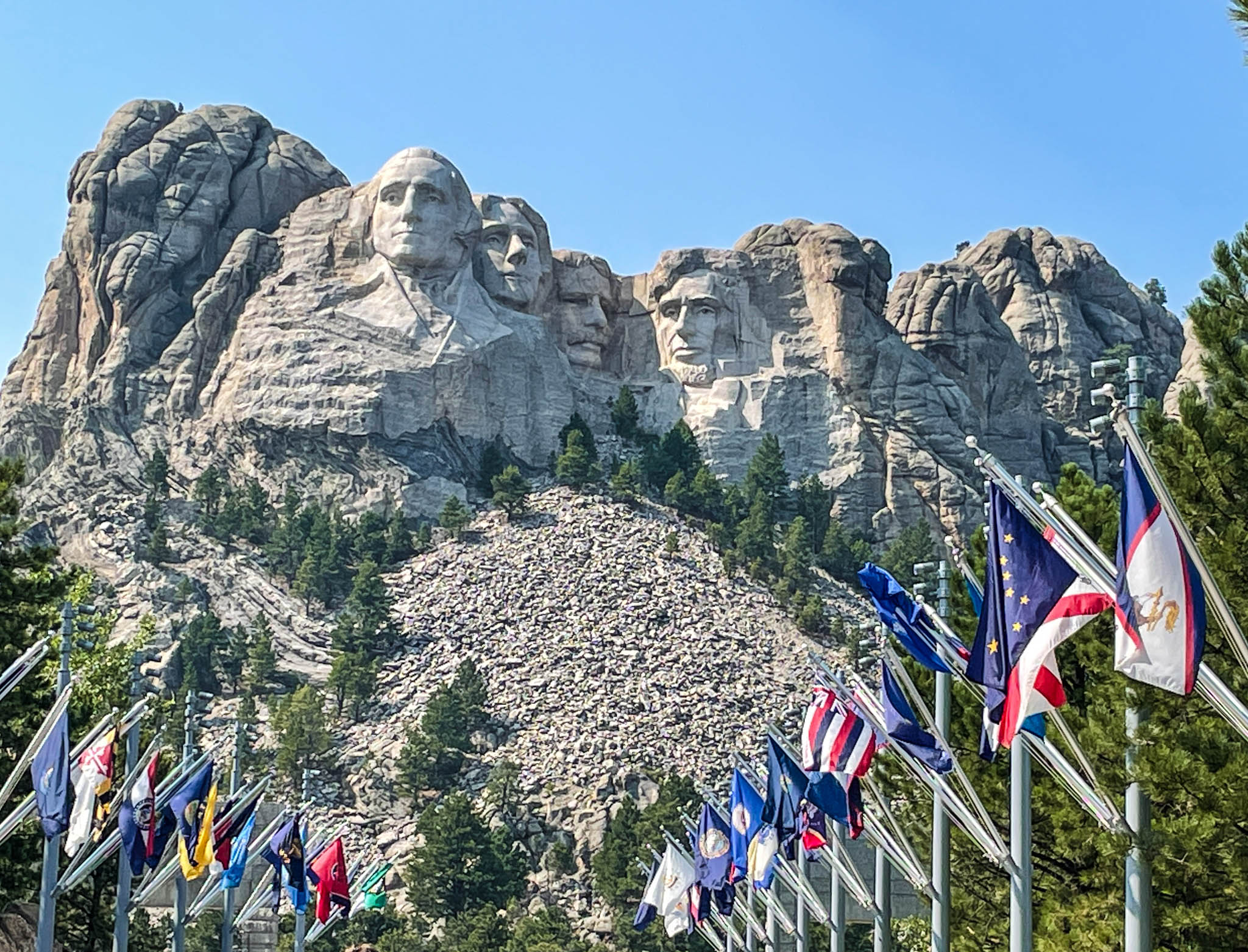 On my last day, I snuck in a short paddle on Stockade Lake before the rains came. It was a small lake but big enough to count for my South Dakota paddle badge. 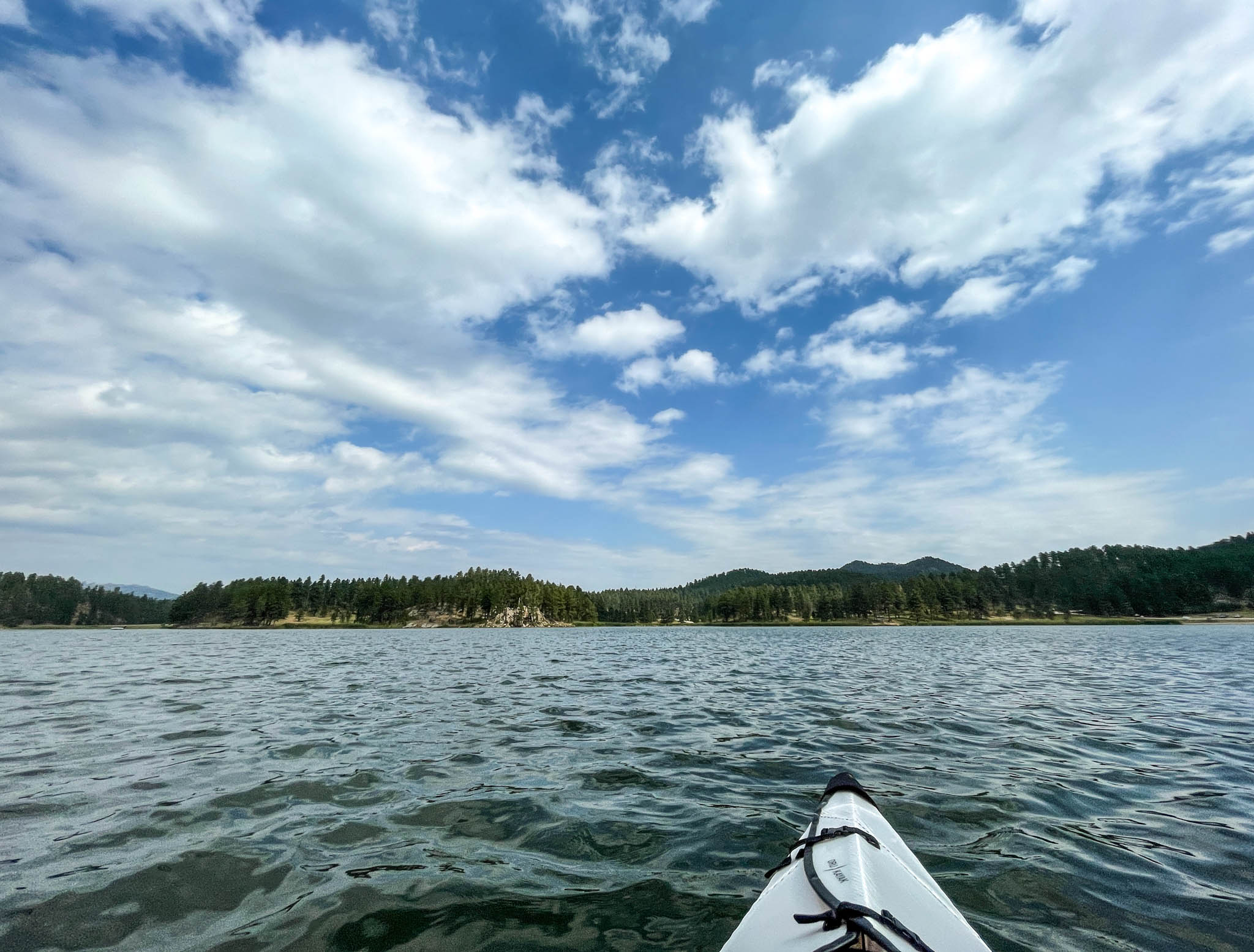 For a one-night stand, this isn’t a bad park. It usually has a big reservoir/lake but they were draining it down for construction so there was a little lake and a whole lot of “beach” to walk on. It was also windy as heck, so between those two factors, I didn’t even try to get the kayak out and get my Wyoming paddle badge. I did get a nice sunset though. 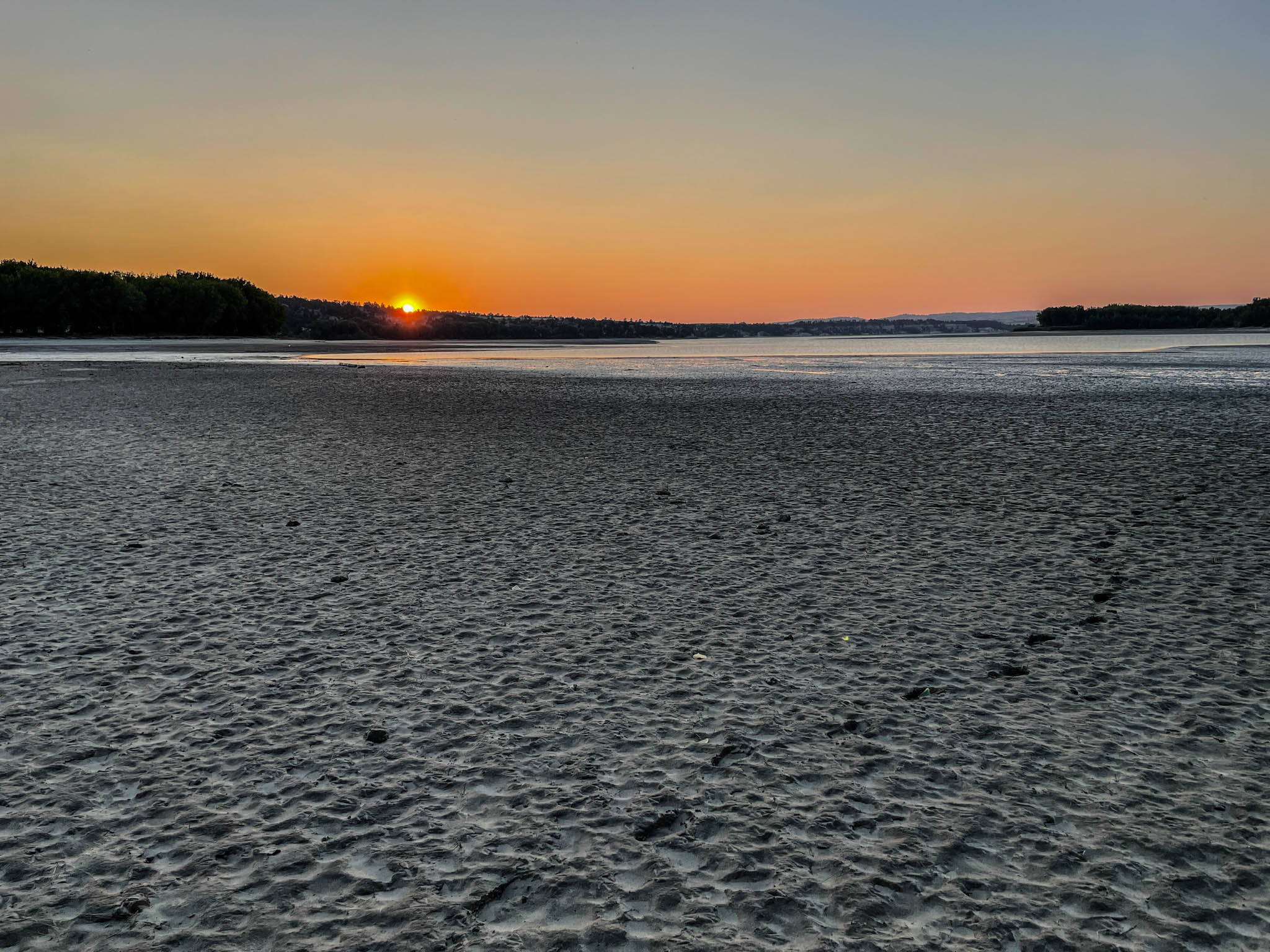 I stayed at the Sandy Beach campground. One row has hookups, and one does not, so choose carefully when you’re making your reservation. Also, the coal trains run all night long, and the tracks are right next to the campground, so if you like the sound of rumbling engines and coal cars, you’re gonna love this campground. Me, not so much. On the way out of the park, I stopped on the overpass just long enough to catch this train going through the park, and I do like how it turned out. So the train thing wasn’t all bad. 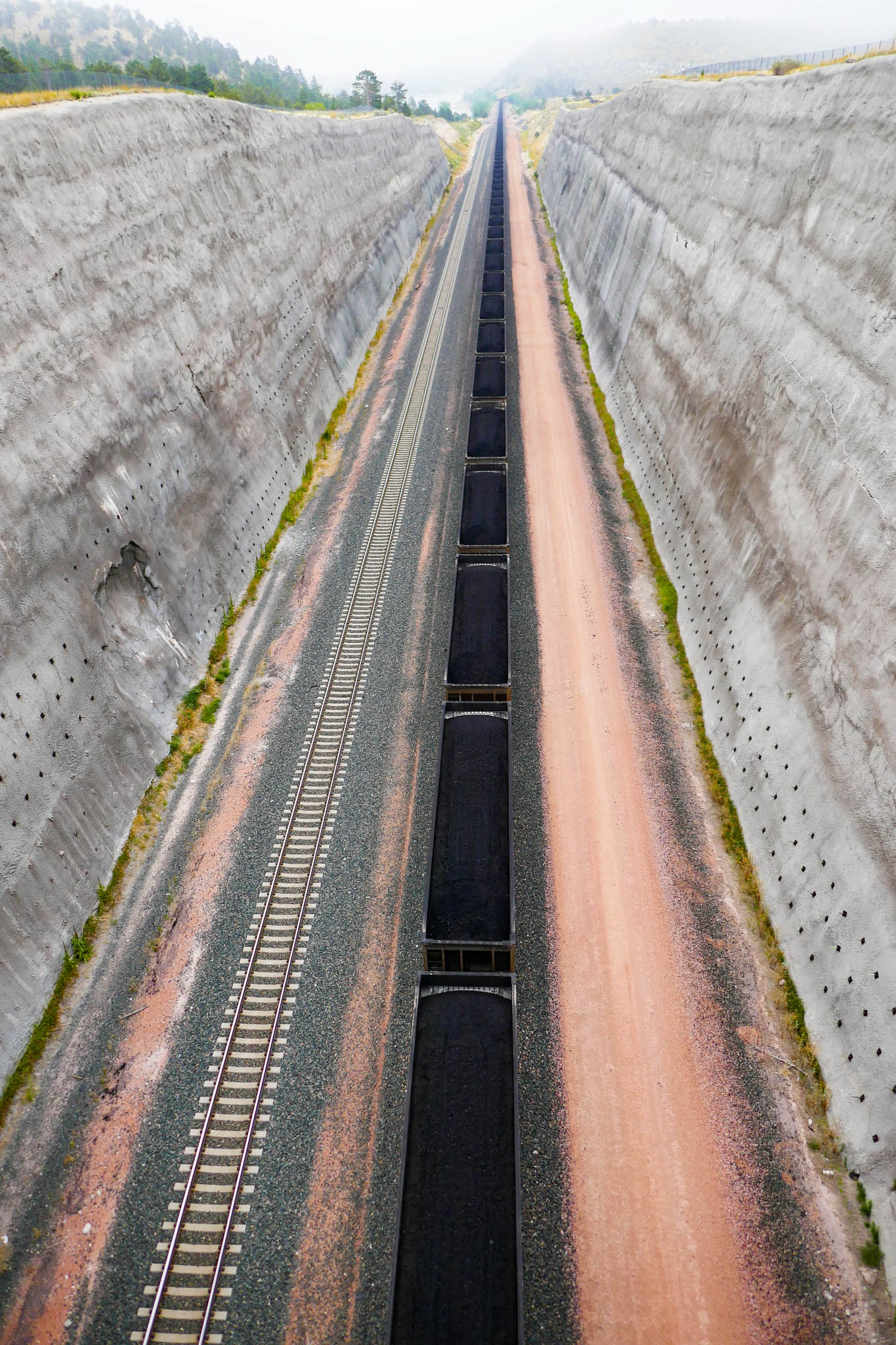 The other thing to note about Wyoming (and also Colorado, I see) is that this kind of rig seems to be totally legal. Yes, that is a truck towing a two-axle trailer towing a boat. And I sometimes feel my 17 feet of trailer is a bit much to tow! 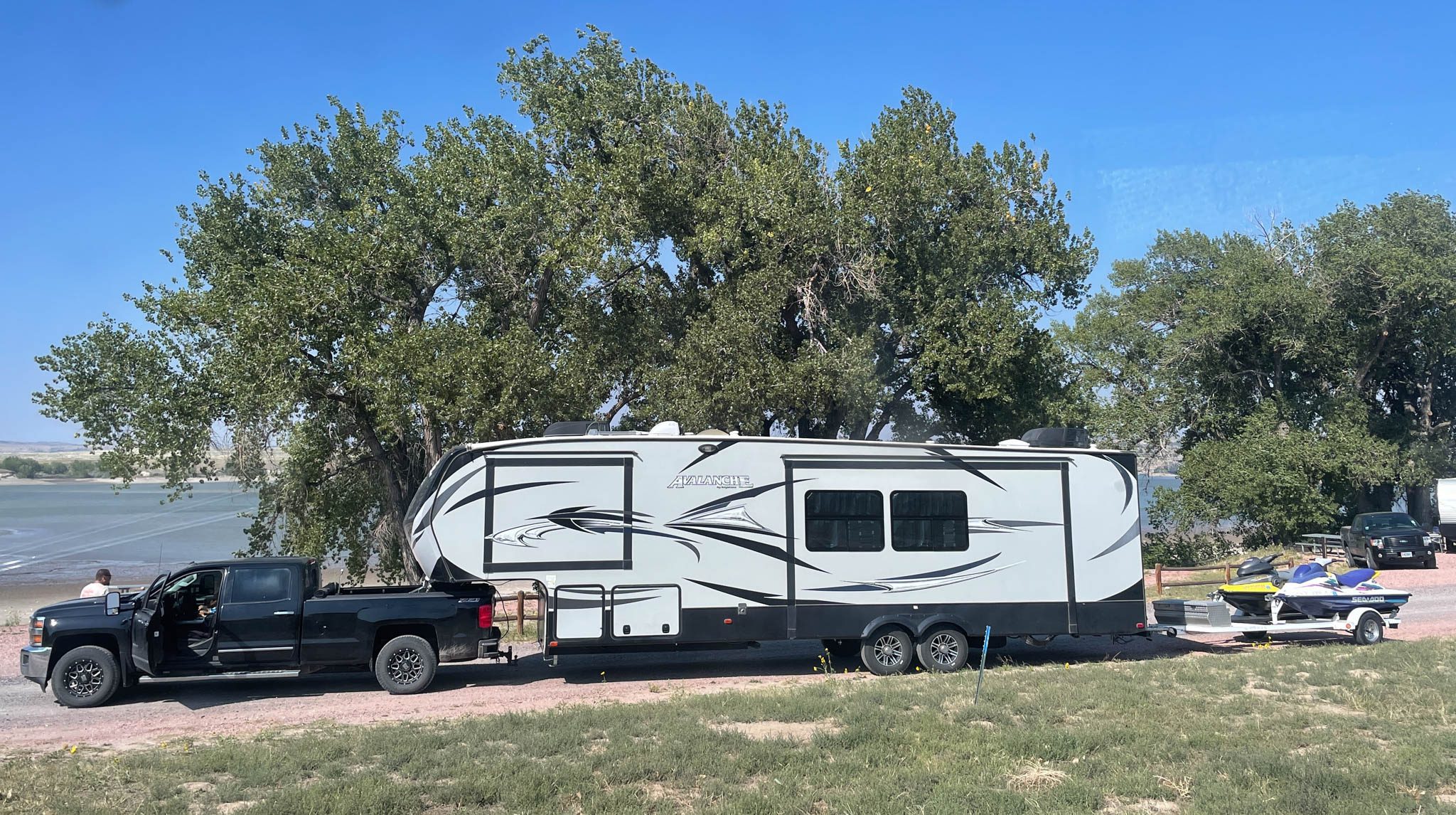 Ah, Boyd Lake. Four years ago, way back in 2017, I was here for a few nights and it’s where my months-long run of bad luck started: (1) dropped my phone in a sinkful of water, (2) cracked windshield on the way to my next stop, (3) broke my hand a few weeks later, closely followed by (4) another broken phone, (5) a trailer tire blowout, and (6) another cracked windshield. So I was a little nervous coming back to the spot where it all started. As if to reassure me that things were going to be OK, the sunset was a beautiful sight that night. 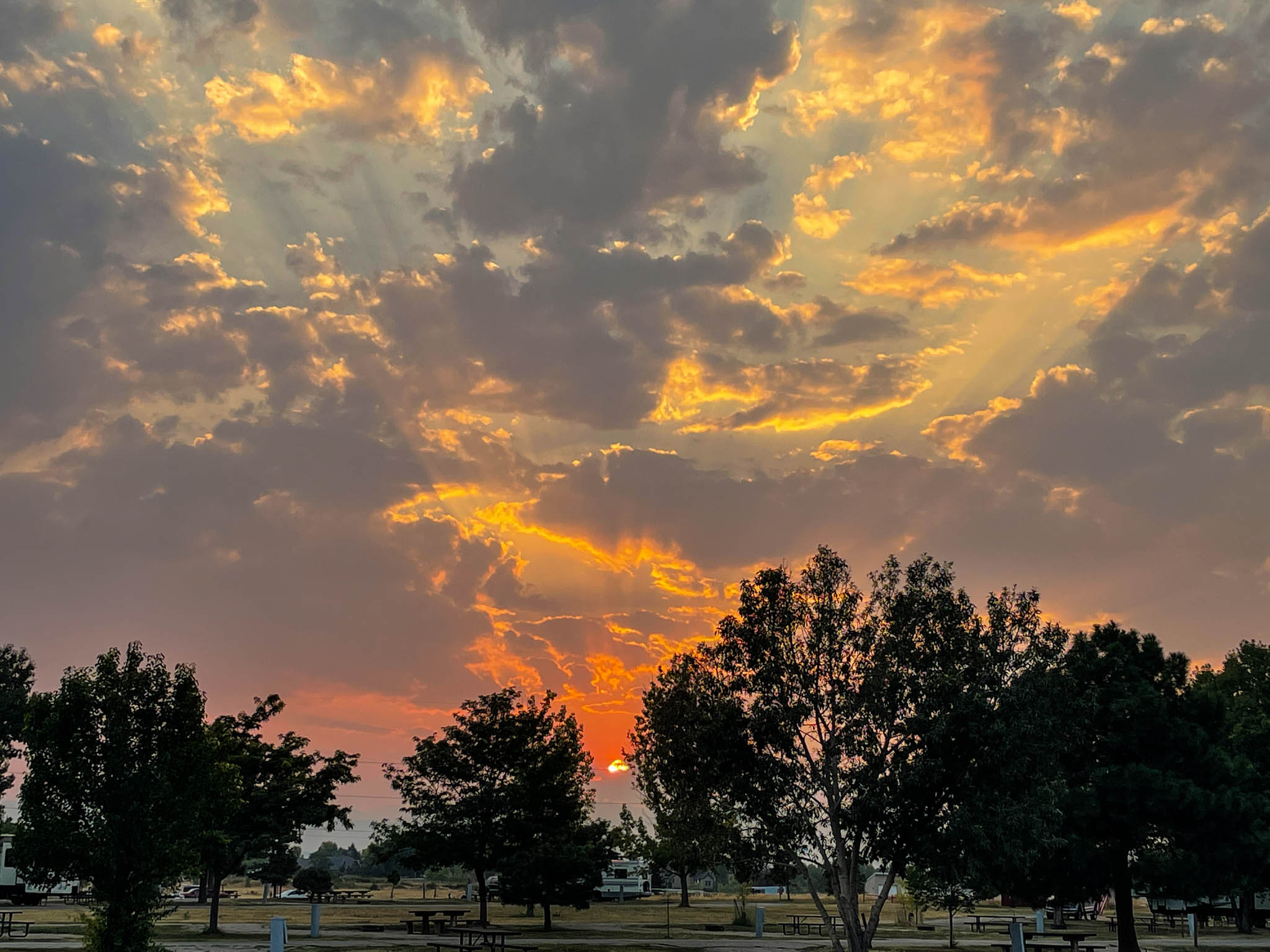 I had a great day in (with air-conditioning, laundry, sewing machine, and mexican take-out) with my cousins in Greeley. My cousin Judy proudly showed me the results of the genealogy work she’s been doing the last few years: acceptance into the Mayflower Society, having traced our line back to one of the hardy pilgrims who landed at Plymouth Rock in 1620. I might piggyback on her work and get another ancestor certified, as we apparently have quite a few from that landing.

One More For the Road

So now I’m in Colorado for a few weeks, enjoying visits with family and friends in the Denver area before heading further into the southwest to explore Utah. I’m pretty sure I’ll be leaving the hay fields behind so here’s a last shot of one of my favorite subjects this summer. 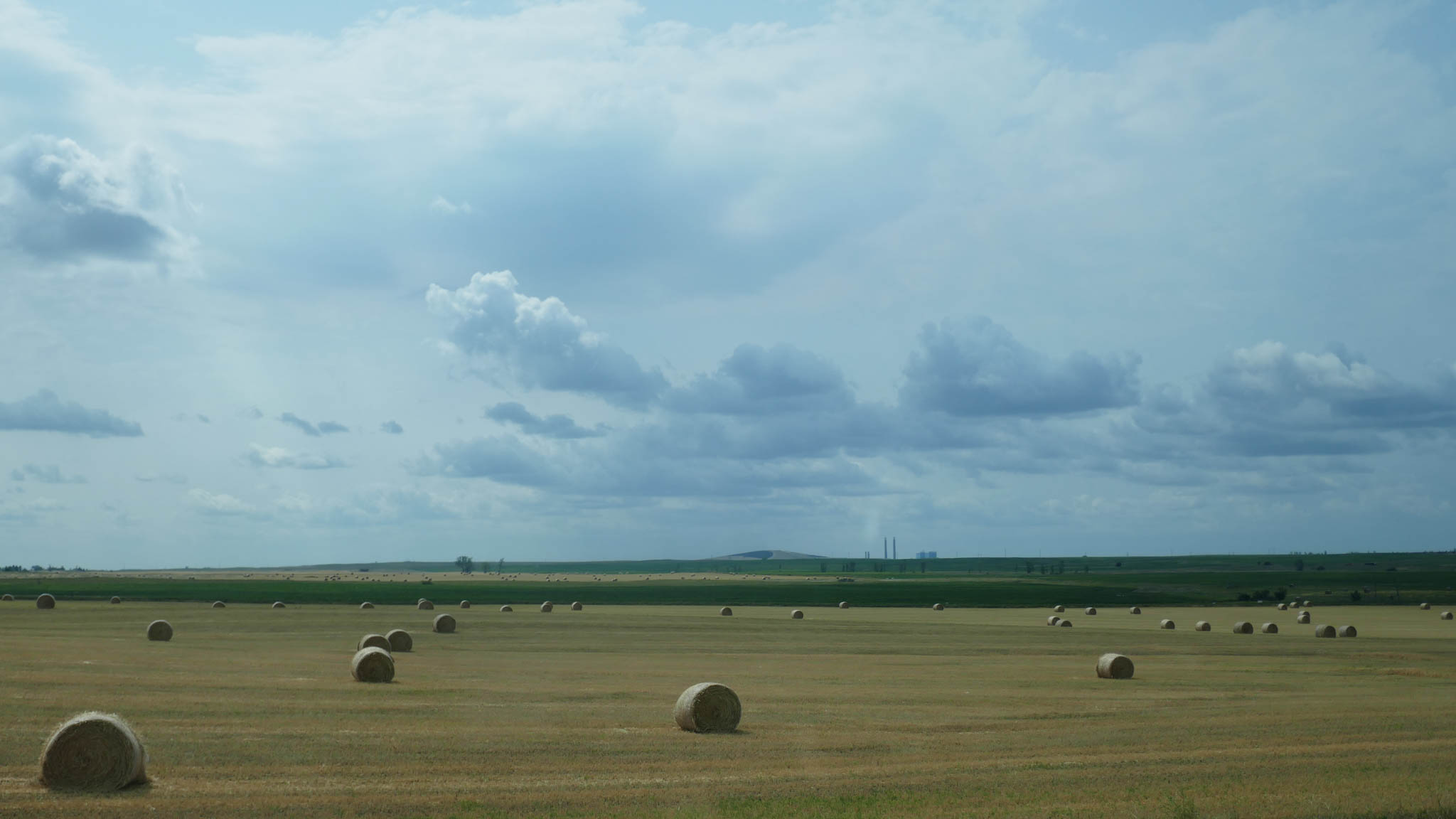