No, this isn’t one of those touchy-feeling posts about finding MY center. This is all about finding the geographic center of North America and of the USA. And that’s not as cut and dried as you might think. Well, the geographic center of North America actually is. No one is arguing that it’s in Rugby, North Dakota, a place I visited in 2016 on my way to pick up my Alto trailer in Quebec. 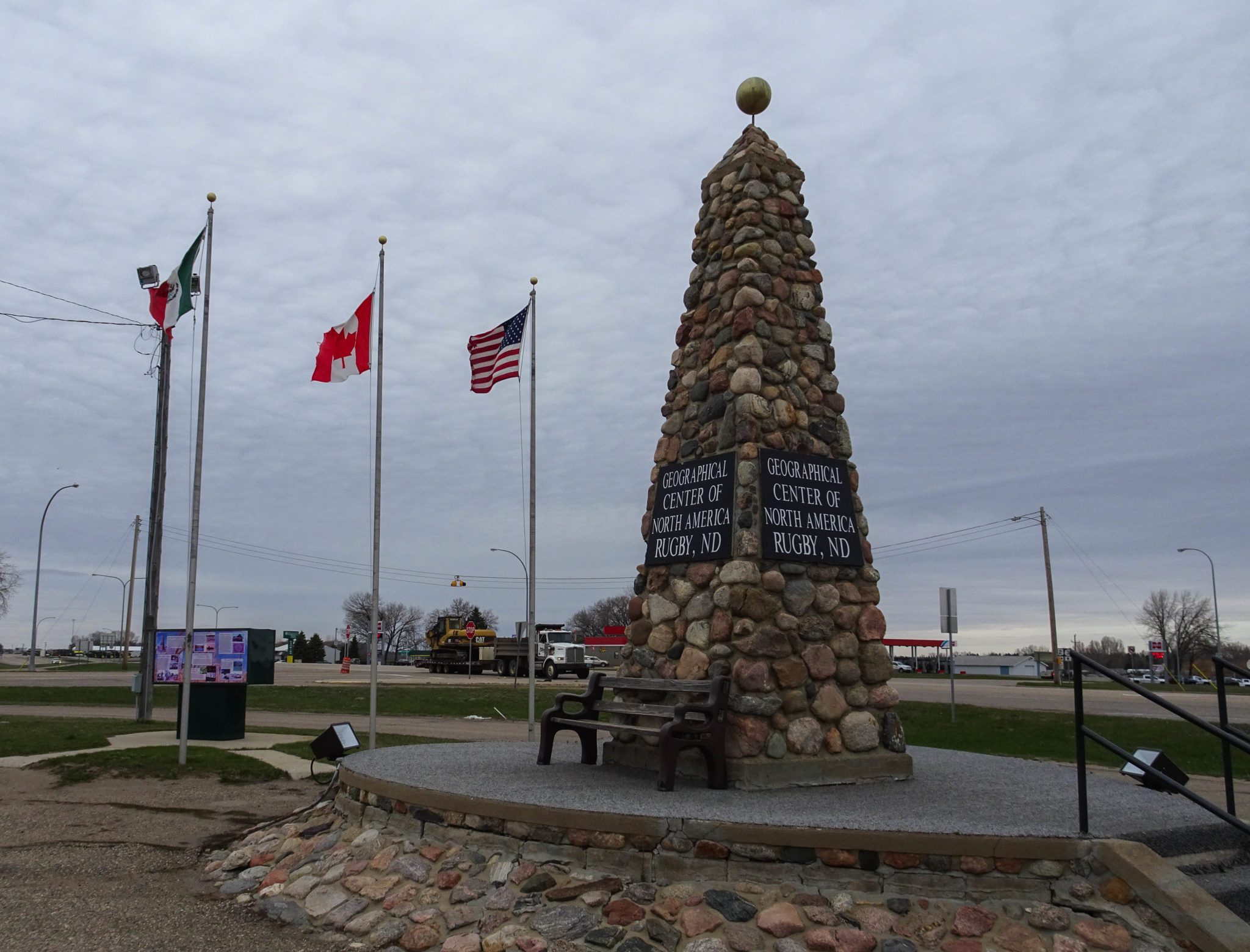 As you can see by the map (thanks, Google Maps!), Rugby is pretty much in the center of the continent. 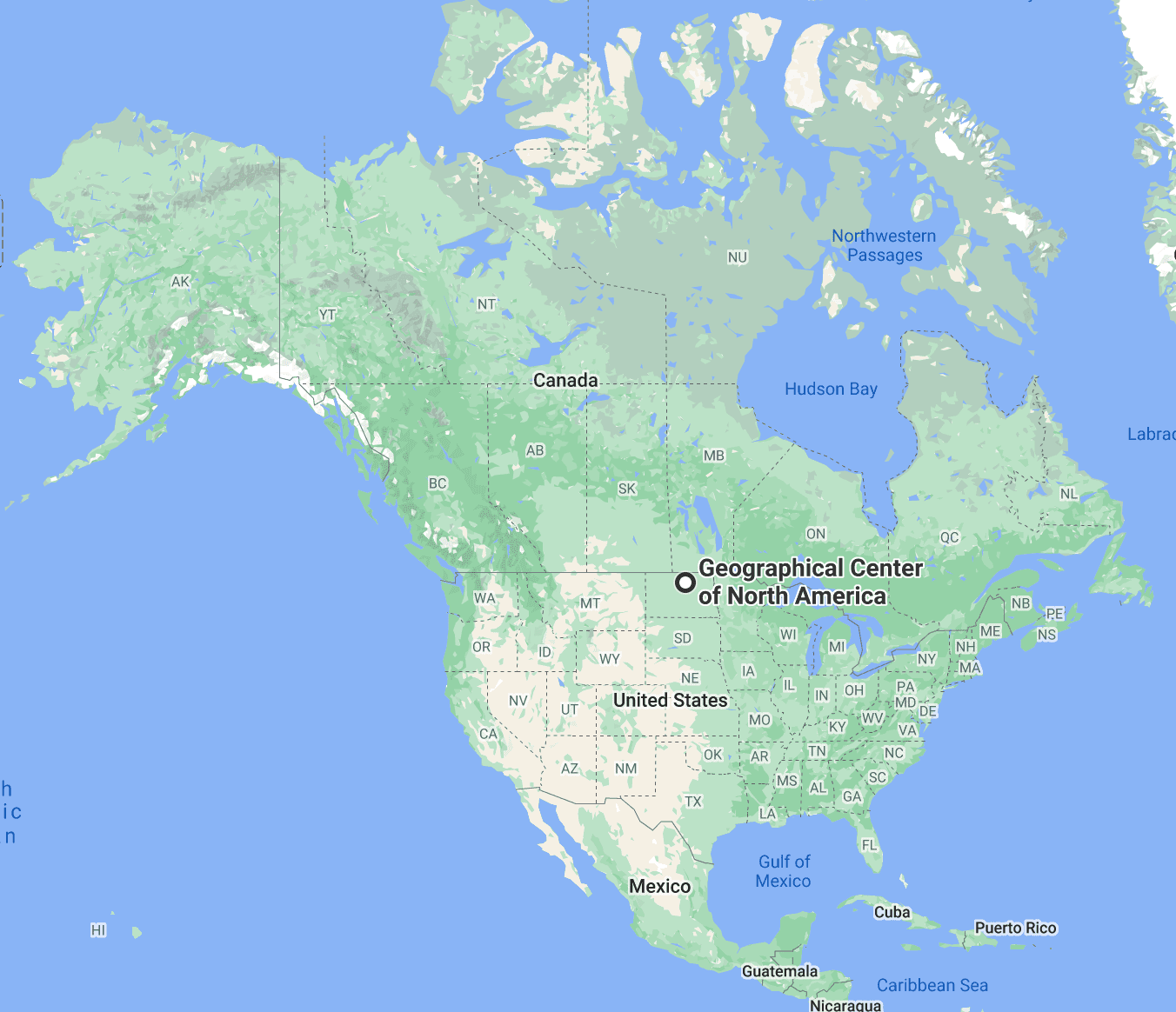 Maybe it will help to look at how the center of something is defined. Like the huge land mass that is North America. Turns out there isn’t just one way to do it.

Balance Method: The point at which a plane map of the area would balance if the map was of uniform thickness. Think of the North American continent as a map about 1/4 inch thick (and that doesn’t bend or sag). The point at which that map is completely horizontal and balanced, that’s the center. This is what the geographic centers seem to use as their method of choice.

Geodetic Method: The geekier method, the center point is where a reference ellipsoid and and standardized model of the Earth’s surface (a geoid) interest. Basically, it treats the Earth as a sphere, not as a flat map. (My high school geometry class could have been way more interesting if it covered useful stuff like this.)

Where’s the Center of the US?

In 2017, going east across the top of Kansas, I saw a road sign that said “Geographical Center of the US” and and arrow pointing left. So of course, I made that left turn. And four miles later, I made another left turn at another sign, leading me down a narrow road next to a big farm, where I found this sign. 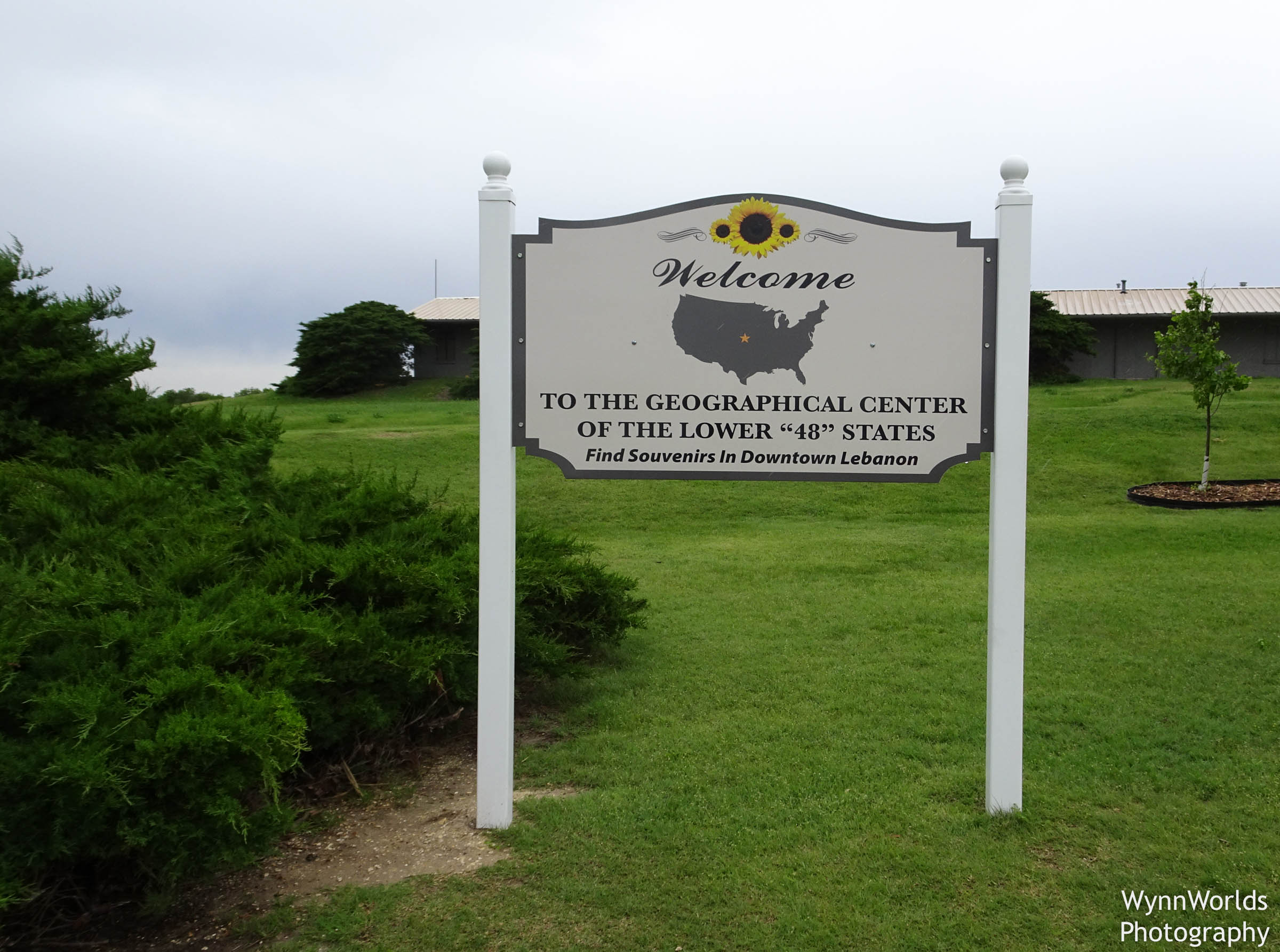 Cool, I thought. Didn’t think any more about it till I saw the Springsteen commercial during the Super Bowl (go, Bucs!) and there was the Boss standing at that patch of land in Lebanon, Kansas. I was kind of excited I’d been there before him 🙂

Fast-forward to 2021 and I’m on a two day transit through North Dakota and South Dakota. I’m checking out Google Maps to find my route throughe the town of Belle Fourche when I see a monument labeled “Geographic Center of the Nation.” Say what?!?

So I google-map both that and the Lebanon, KS one. They are 545 miles apart (the Lebanon one is the lower dot). How on earth, or rather, how in the USA, can we have two geographic centers? 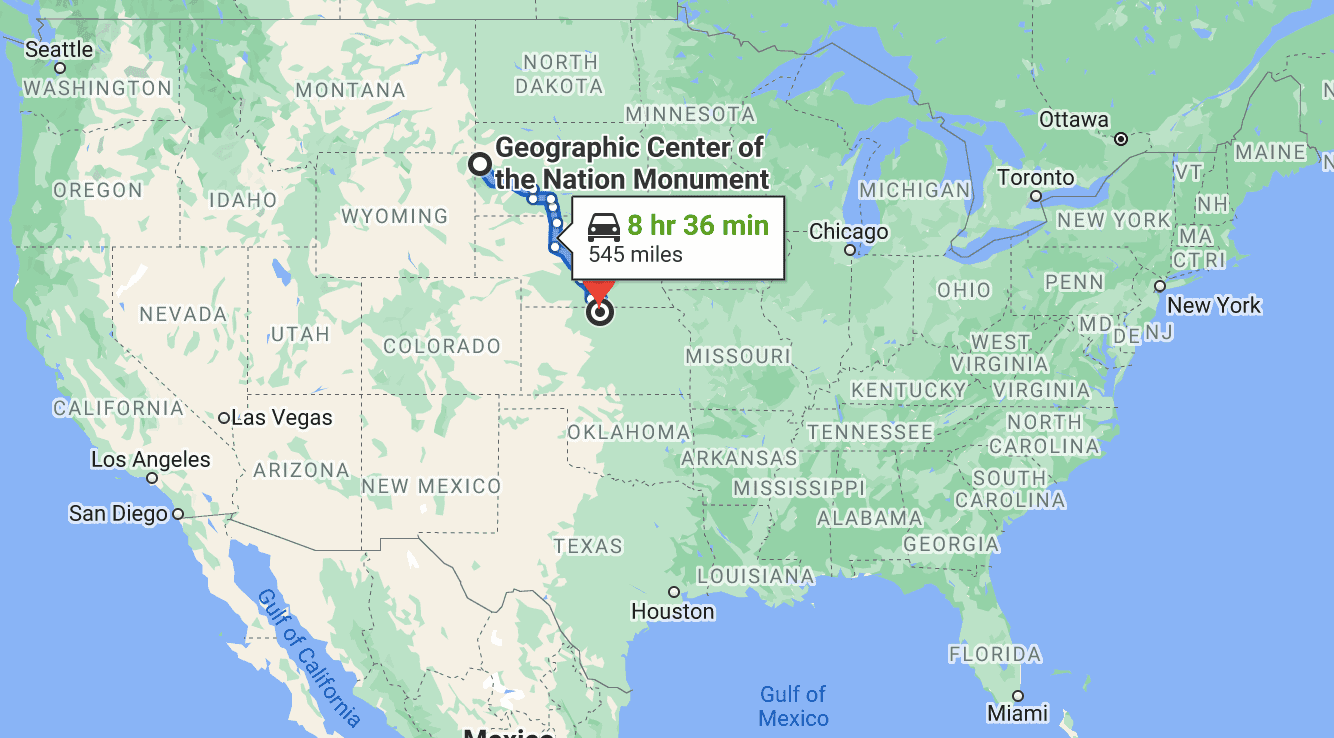 Well, it’s like this. The Kansas one was done before the US included Hawaii and Alaska. So once they joined up, the Kansas point was renamed to be the geographic center of the 48 contiguous United States.

With Alaska and Hawaii included, the geodetic method has the geographic center of the US about 14 miles north of Belle Fourche. In a field. Where you have to crawl through a barbed wire fence on private property to get to it. Not gonna happen. So the powers that be went for a nice pretty monument in the middle of the town of Belle Fourche. Much easier. 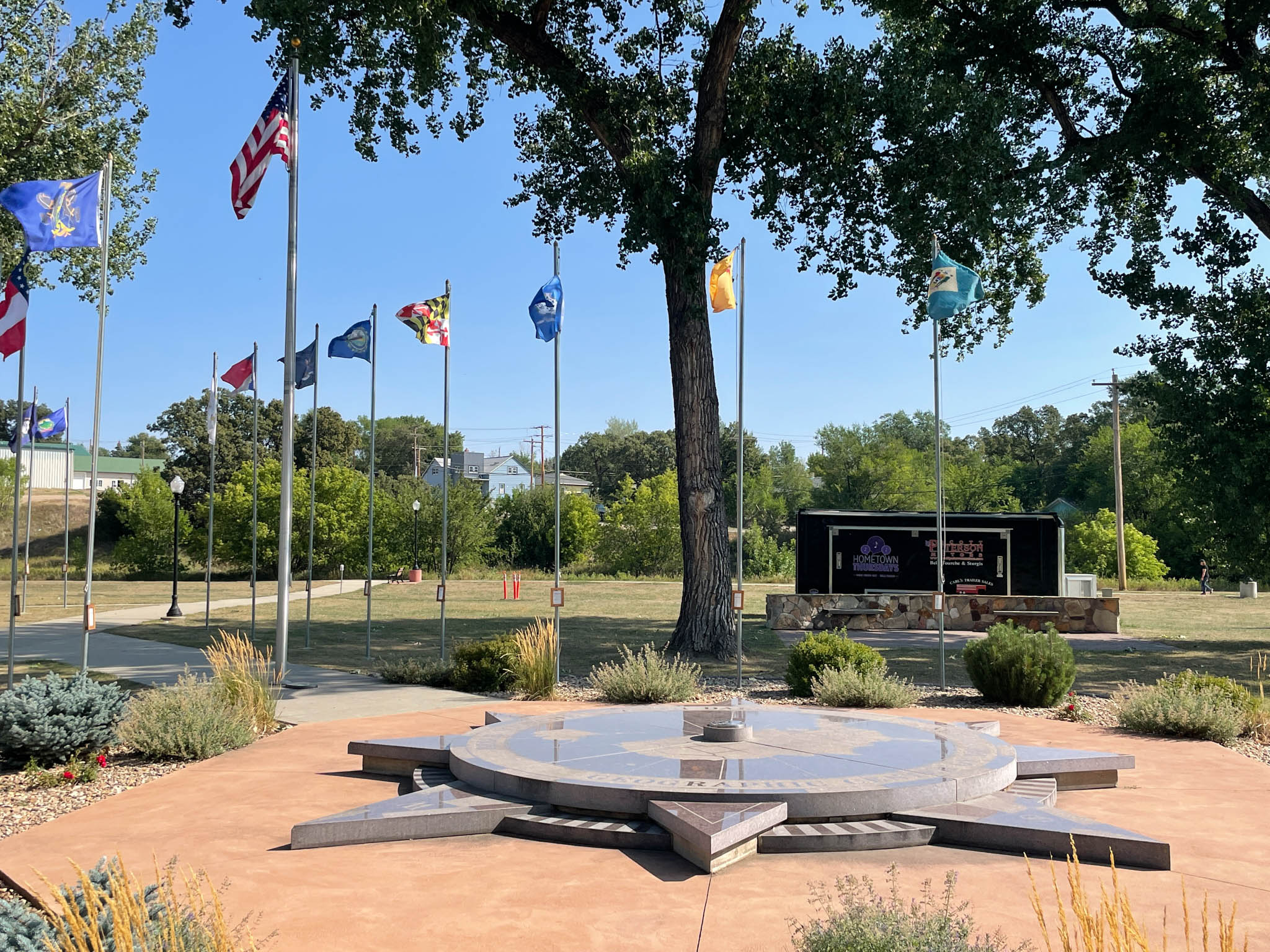 This one is, by far, the most touristy one, complete with a gift shop, a little museum, and a dump station (seriously!). Still, it does cover the basic point of the monument with a nice map and marker. Oddly enough, though, the gift shop doesn’t sell much in the way of “center of the US” stuff, and I really wanted a small version of that silver marker. 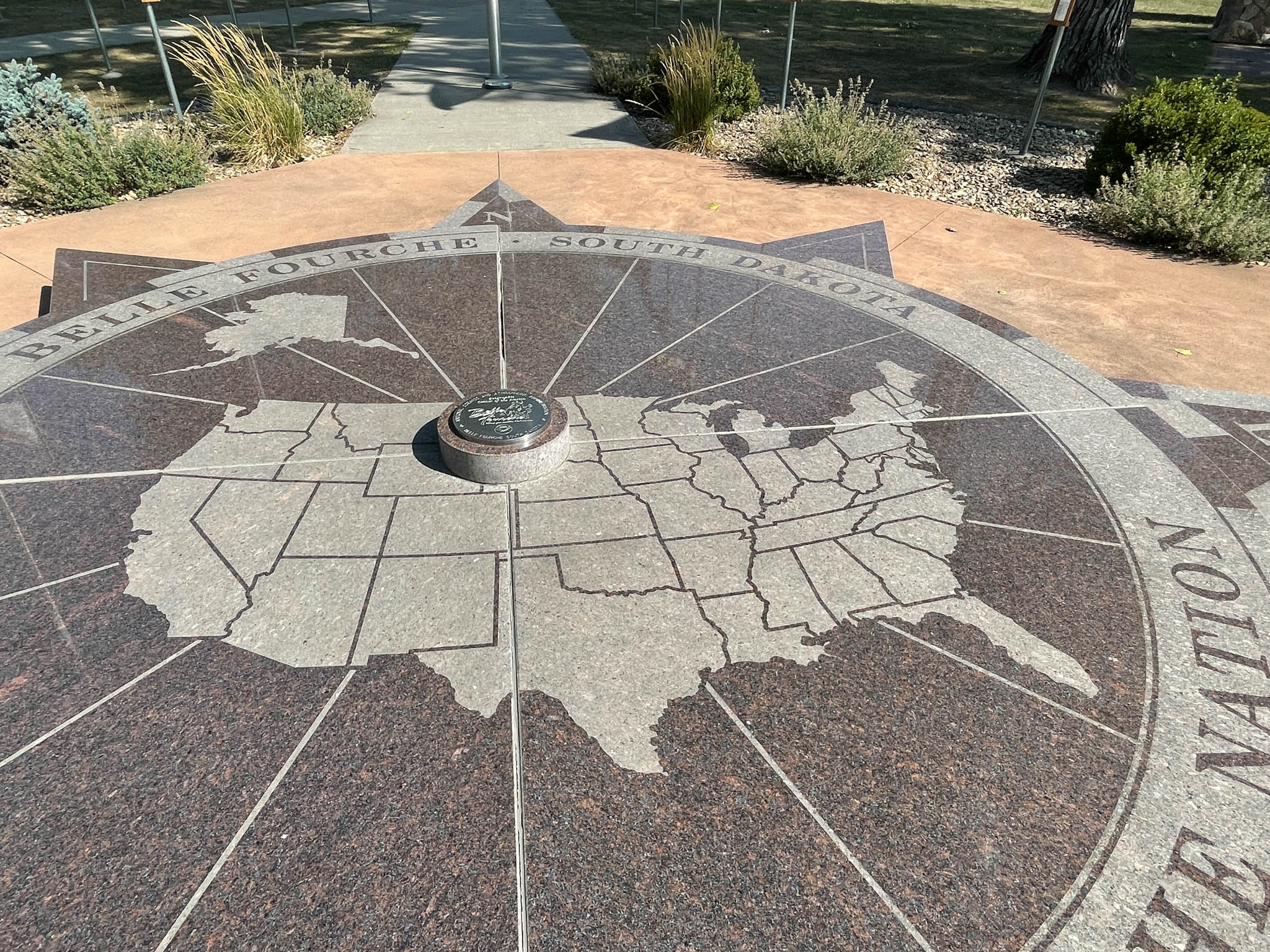 There’s one more center to consider, the geodetic center of the 48 contiguous US states, in Osborne, Kansas, about 42 miles south of Lebanon, Kansas (the geographical center of those 48 states). But, in what is kind of typical for these centers, the marker is in Osborne, but the actual center is 18 miles south, on a private ranch that has a nice little marker. (I haven’t seen either of these yet, so no photos.)

Want to See the Centers?

It’s a nice little road trip, if you like back roads and don’t mind the howling wind of the plains. Fly into Denver and rent a comfortable car. You can also pick up a few National Parks (Badlands, Theodore Roosevelt), Mount Rushmore, and some nice national grasslands too. 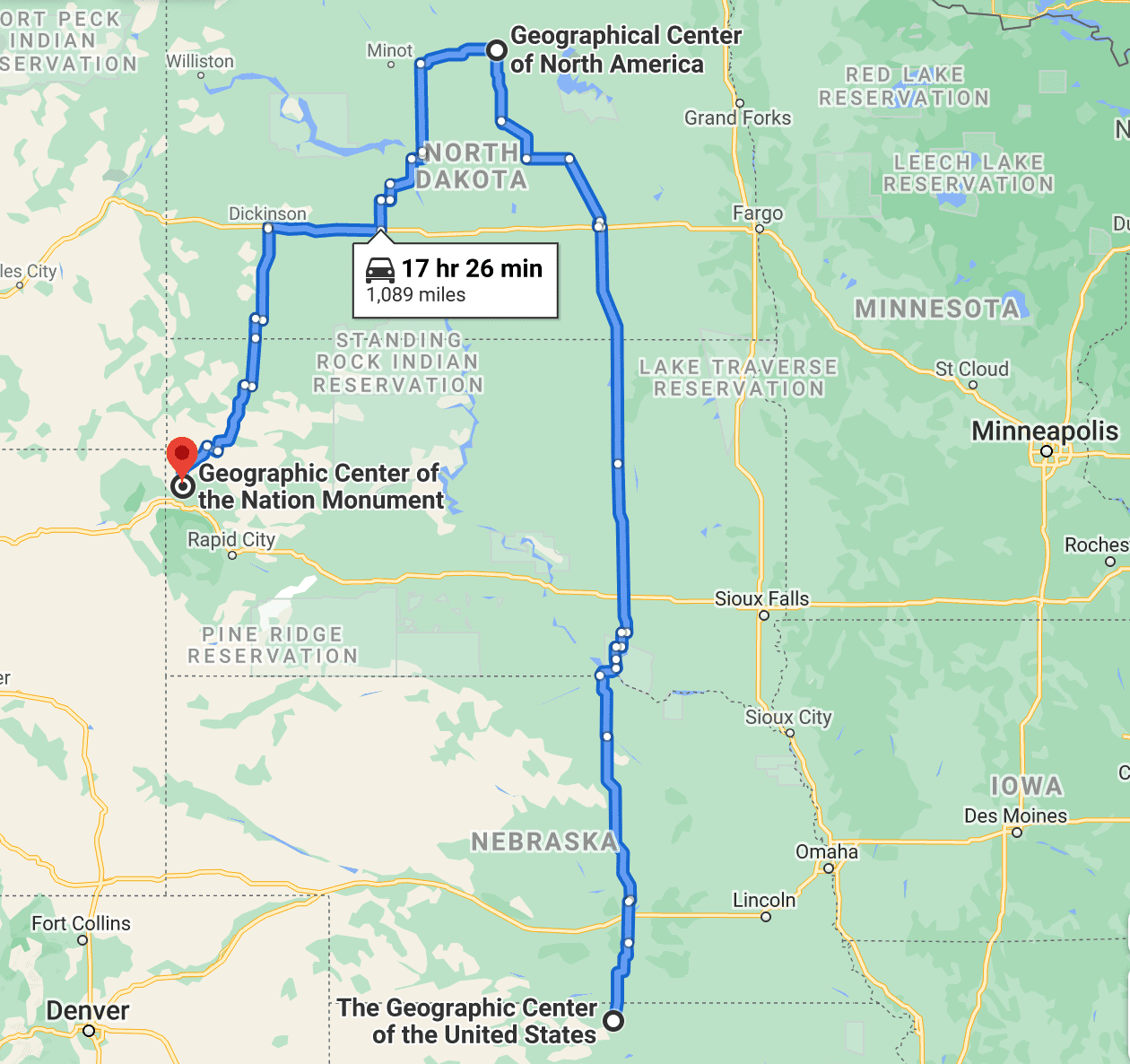 When science discovers the center of the universe, a lot of people will be disappointed to find they are not it.