Avoiding the interstate highways and taking the back roads is easy in North Dakota because most of the roads are back roads. Long straight stretches of two-lane highways go north/south and east/west, with occasional rolling hills to break up the monotony. Not much traffic out here, and not many towns either. But if you pay attention, over the hours, a portrait of the state emerges as the miles go by. 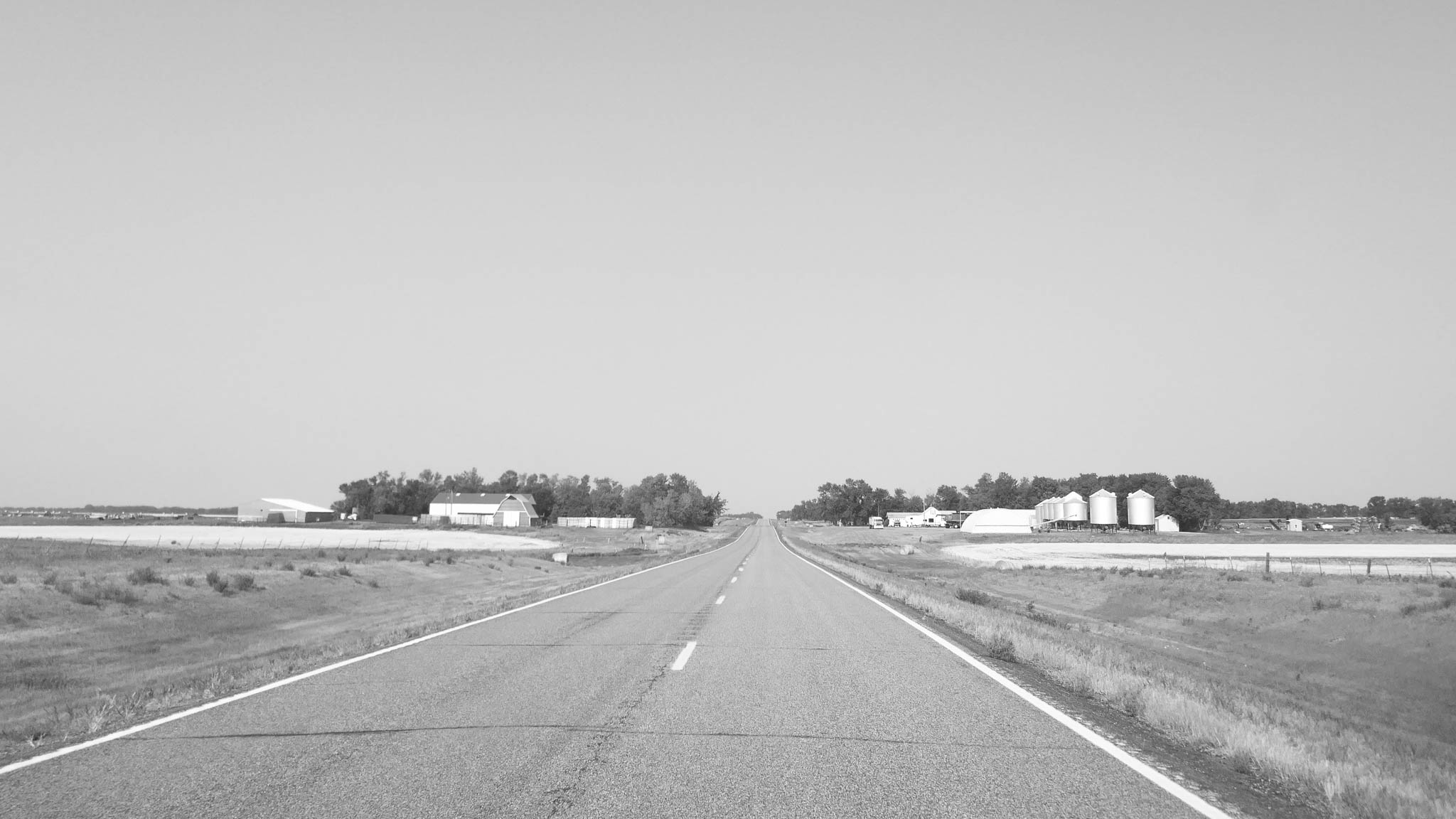 The farms here are large endeavors, often with the house on one side of the road and the mass of farm buildings on the other side. And always, the grain storage bins, whether there are a few or more than a dozen. 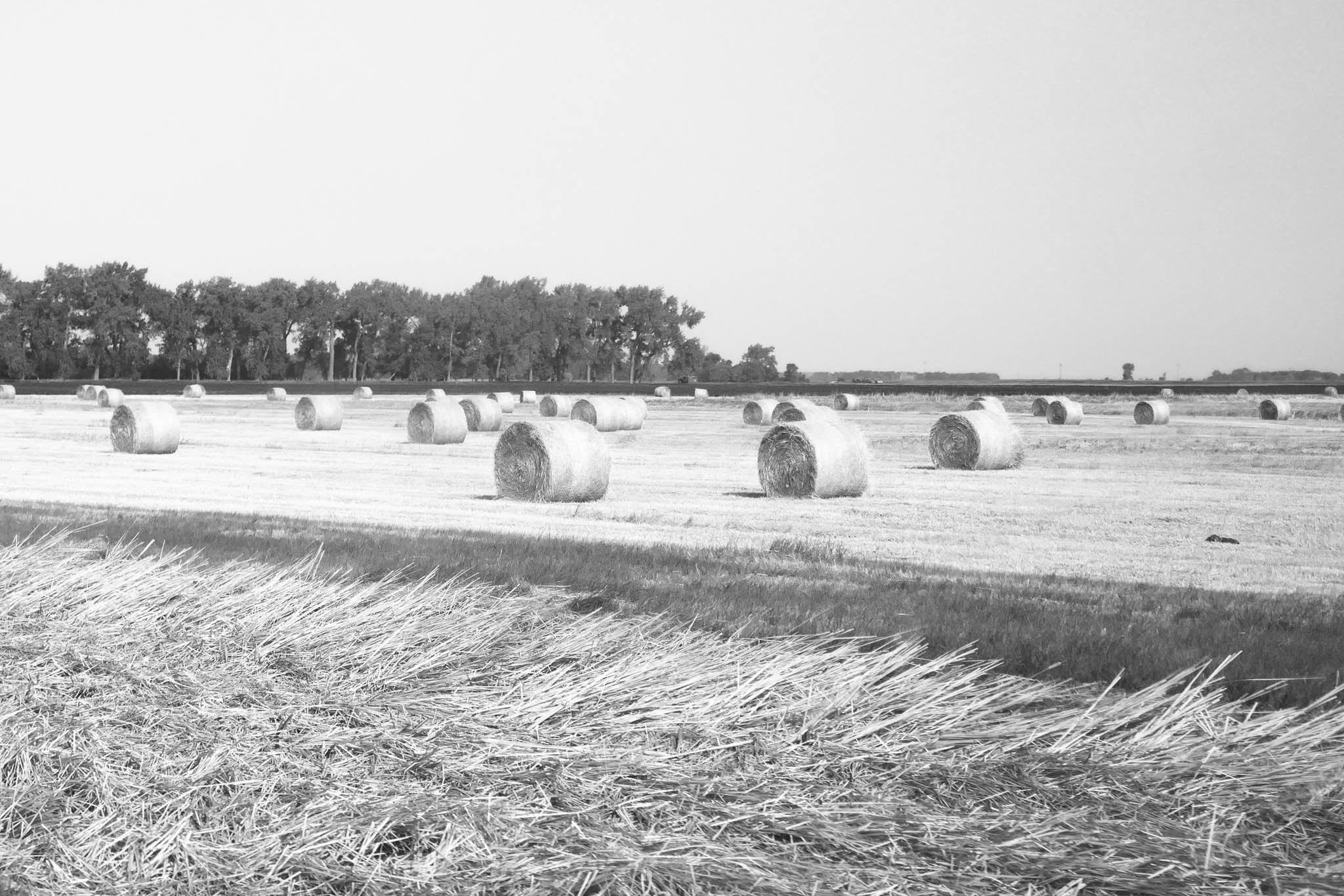 What do those farmers grow in North Dakota? Mostly corn and hay, with some sunflower fields, their round yellow faces bobbing in the breeze. Haying time is well underway here, and I passed five different pieces of farm equipment on the road. The farmers are good about signaling when its safe to pass them and they pull over as far to the right as they can. A few times, though, I still worried about scraping my rig because those long mechanical arms stick out quite a ways. I can’t even figure out what some of those huge machines do but I marvel that humans invented them anyways. 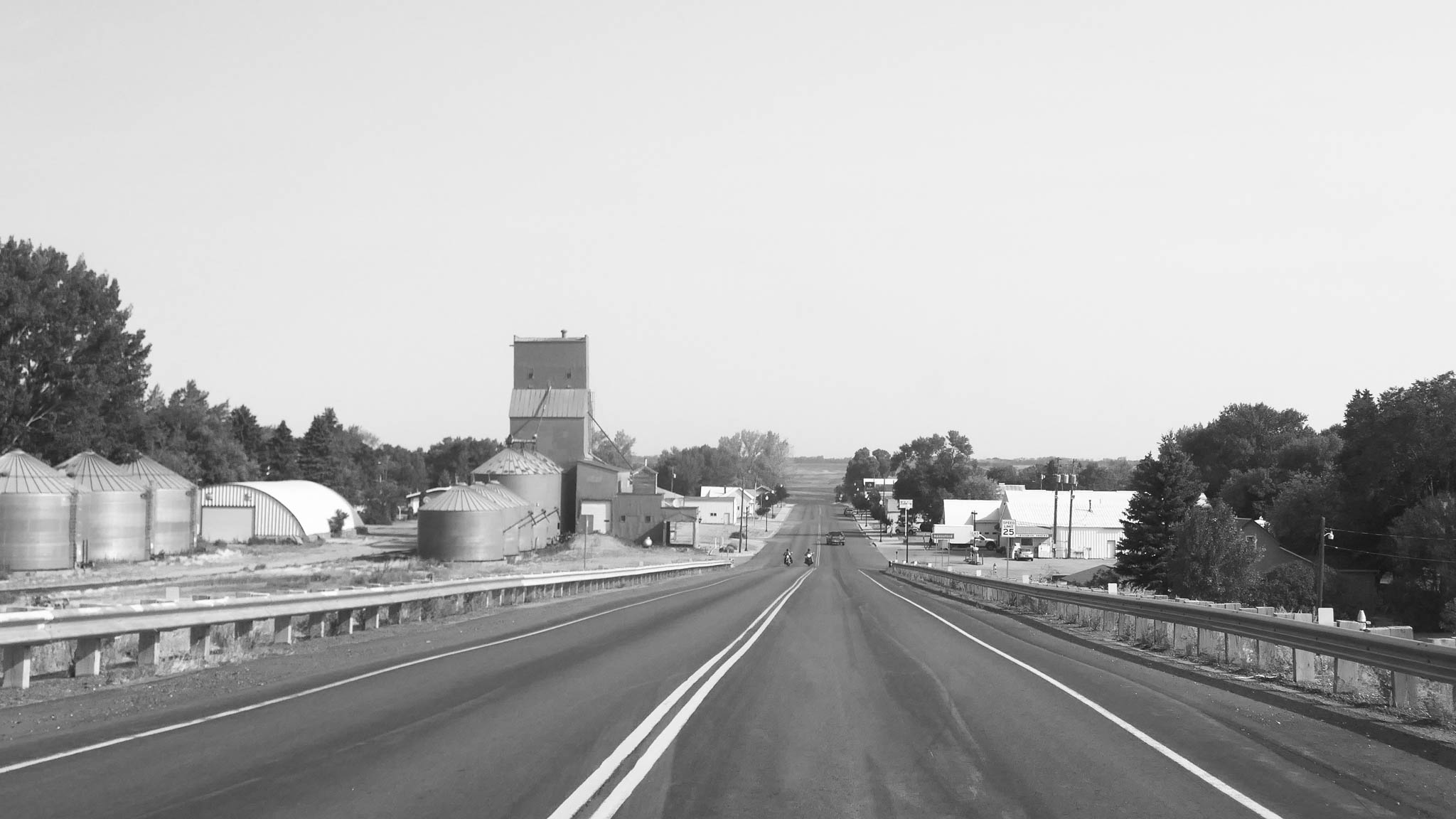 The towns are few and far between, and you can’t always count on a gas station, either. This little town was literally three blocks long, with a tiny post office dwarfed by the grain storage complex. And no gas station. I’ve learned to plan ahead and use google maps to find where gas stations are on the back roads so I know when to fill my tank and not get caught out on transits longer than a hundred miles. 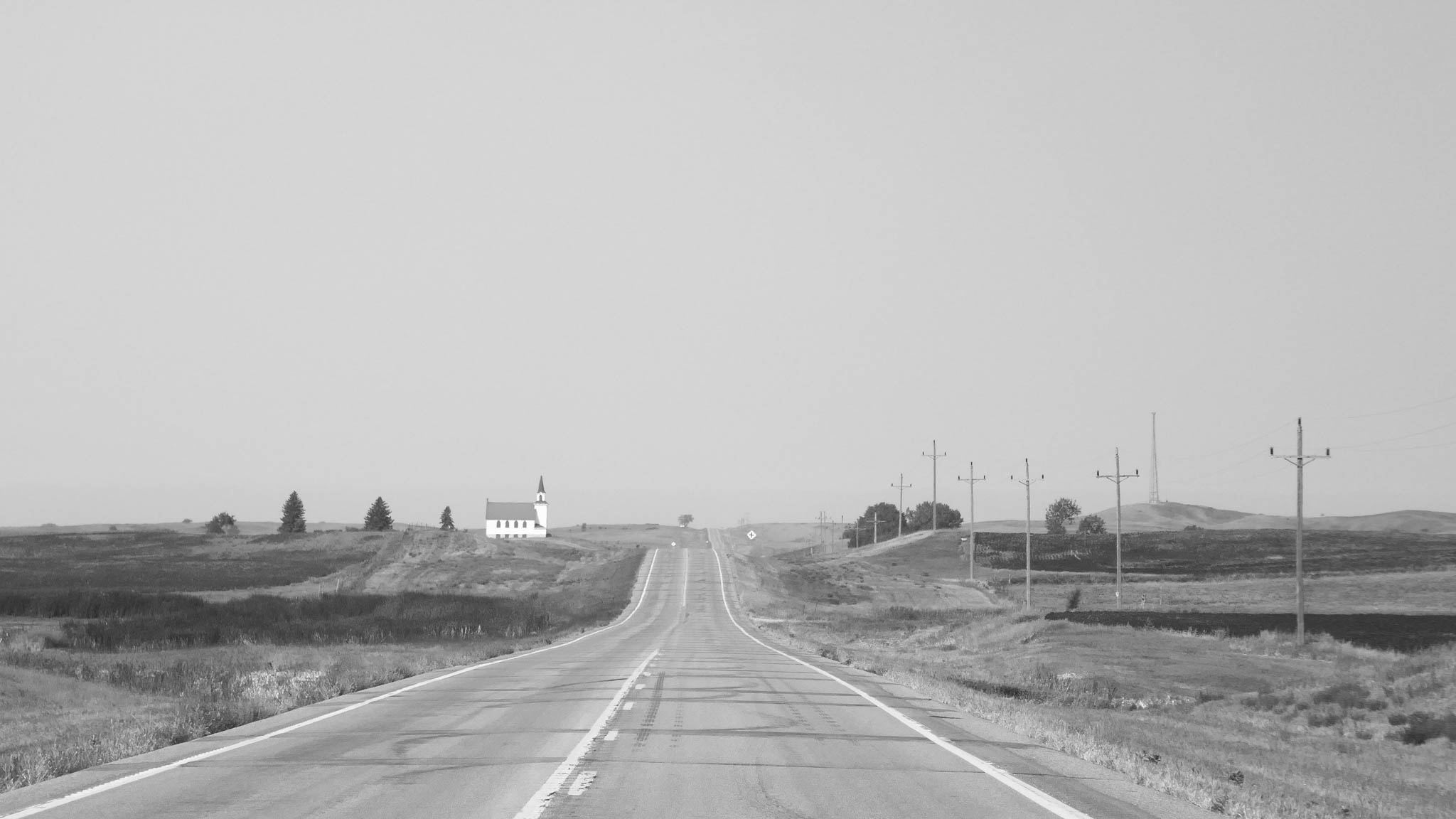 More than a dozen miles from the last town in my rearview mirror, I spotted this gleaming white church ahead. There’s no town even close by, but I guess the number of farming people within sunday driving range makes up enough of a congregation to support it. 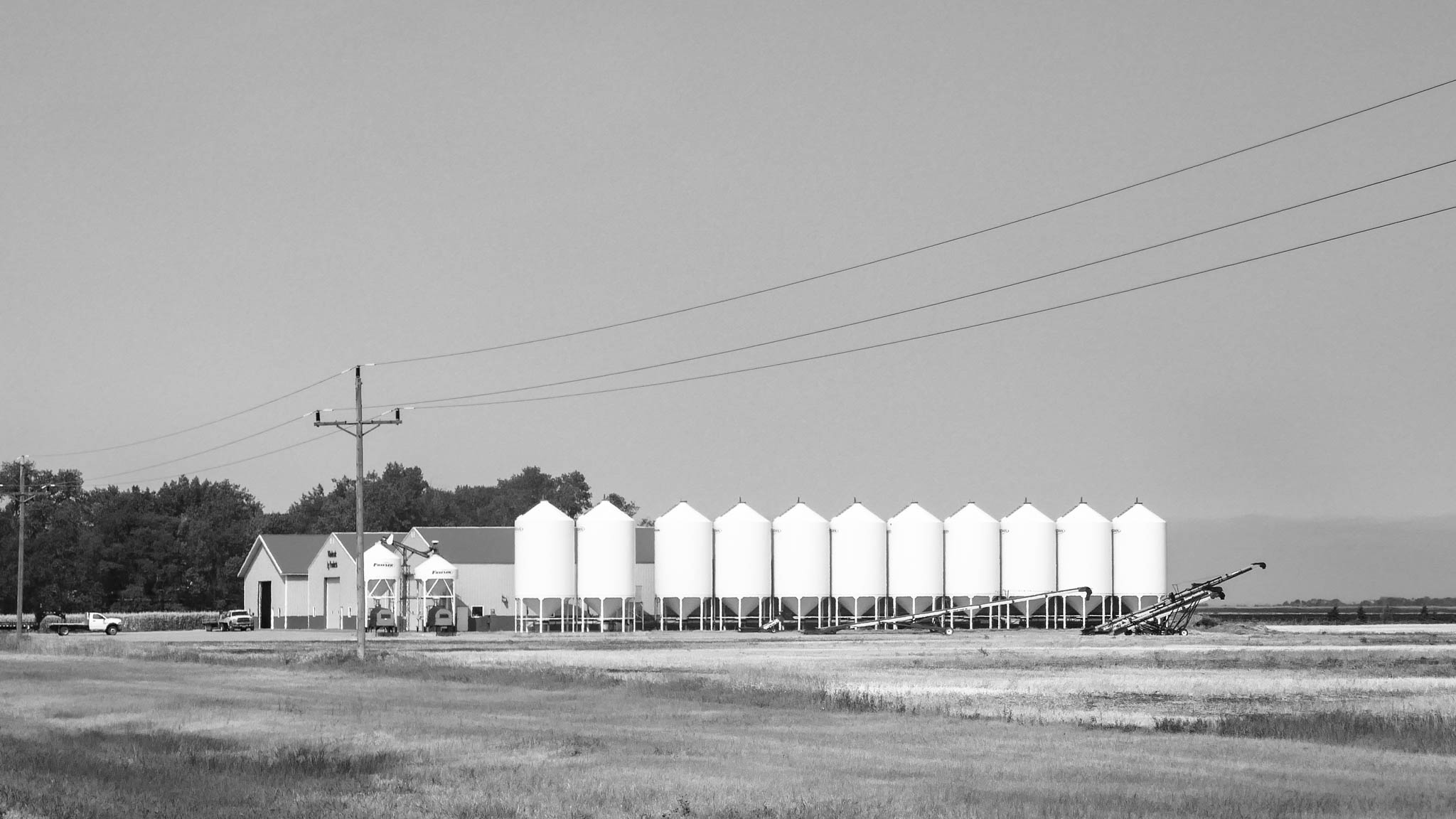 Seed and grain has to start somewhere, and in North Dakota, places like this are where the farmers go to get their supplies. These gleamed in the noontime sun, ready for their closeup (I just finished watching Sunset Boulevard, so I had to use that line somewhere…) 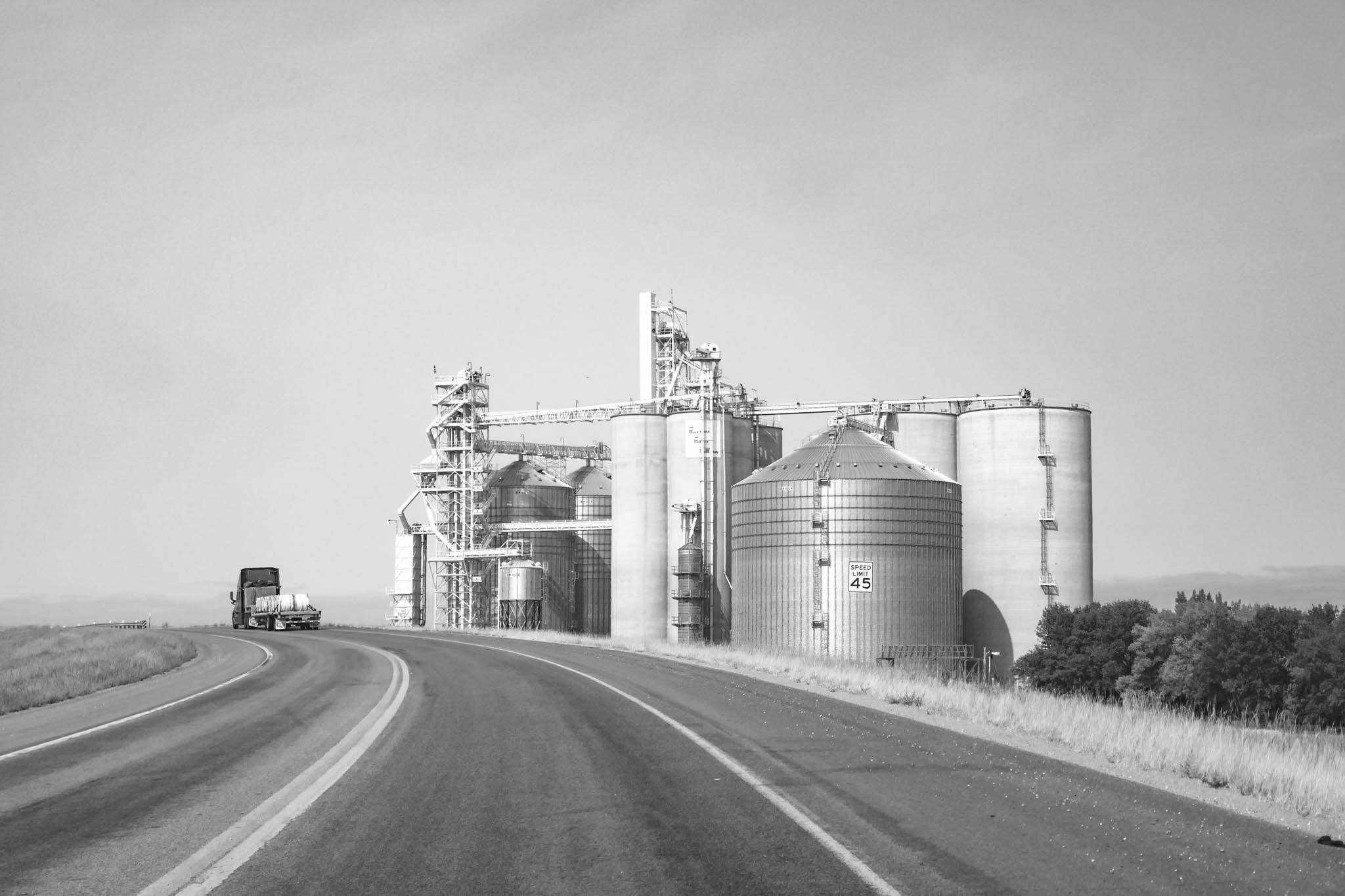 My gas stop this day was at a crossroads town, Carrington, where Route 200 meets Route 281 and Route 52. It was a big enough place to support two grain processors and a truck-stop version of Casey’s, a local chain. I filled up and went inside to use the restroom and pick up one of Casey’s rockin’ snickerdoodle cookies. It was a slow day and I wanted a break, so the clerk and I chatted a bit about the weather and the cookies as the machine slowly approved my debit card. We both had a laugh about churros and donut holes, then I headed back to my rig with a smile on my face, enjoying the human connection that even a short gas stop can provide. 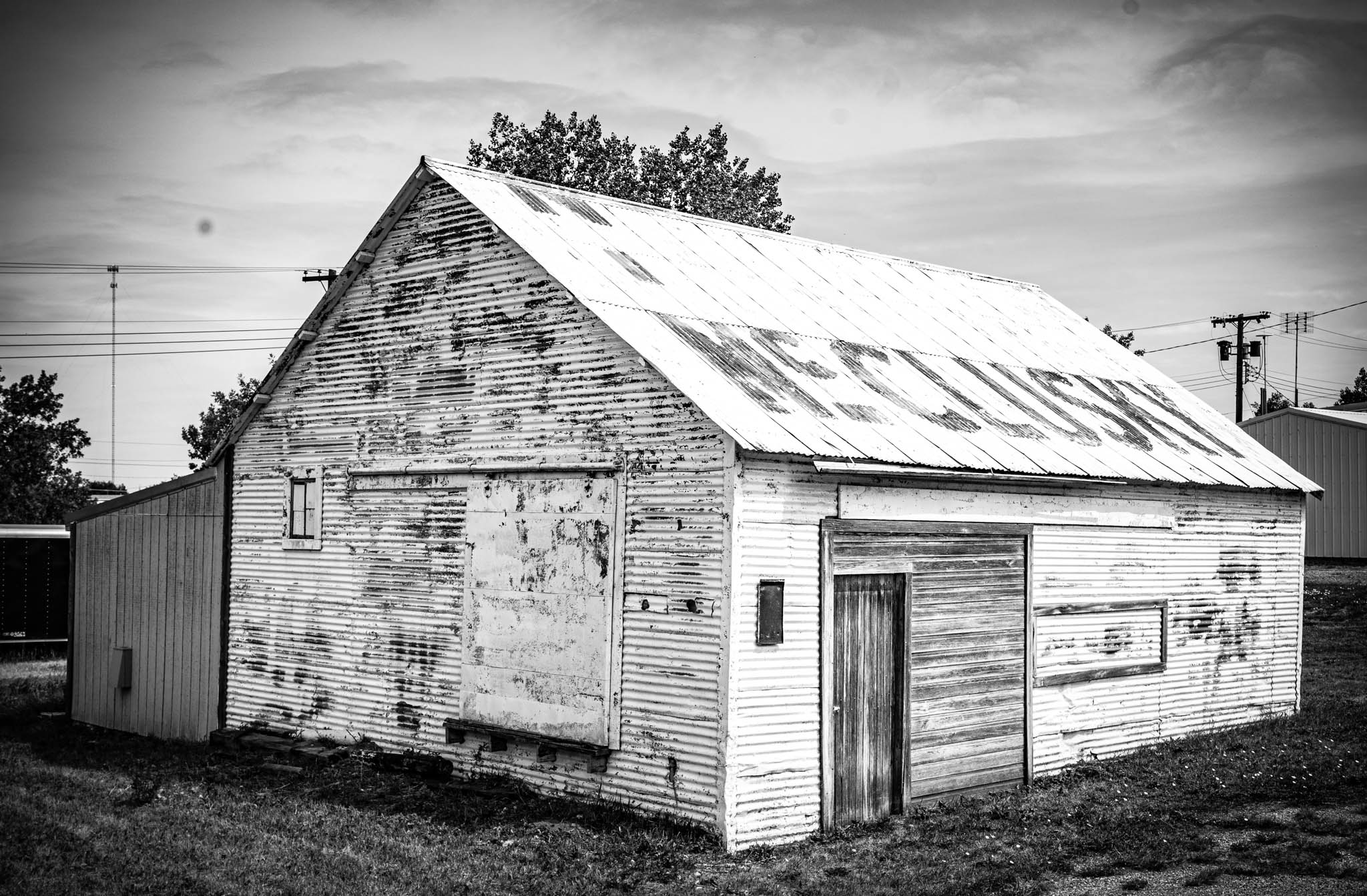 I entered the tiny town of McClusky, which proudly displays a sign claiming to be the geographic center of North Dakota. I stopped to stretch my legs and buy a drink and snack at the gas station, where I was the only one of the half dozen people inside who were not local and not having a conversation about the weather or the owner’s upcoming birthday. I wished him a happy birthday on my way out, smiling at this little slice of small town life. 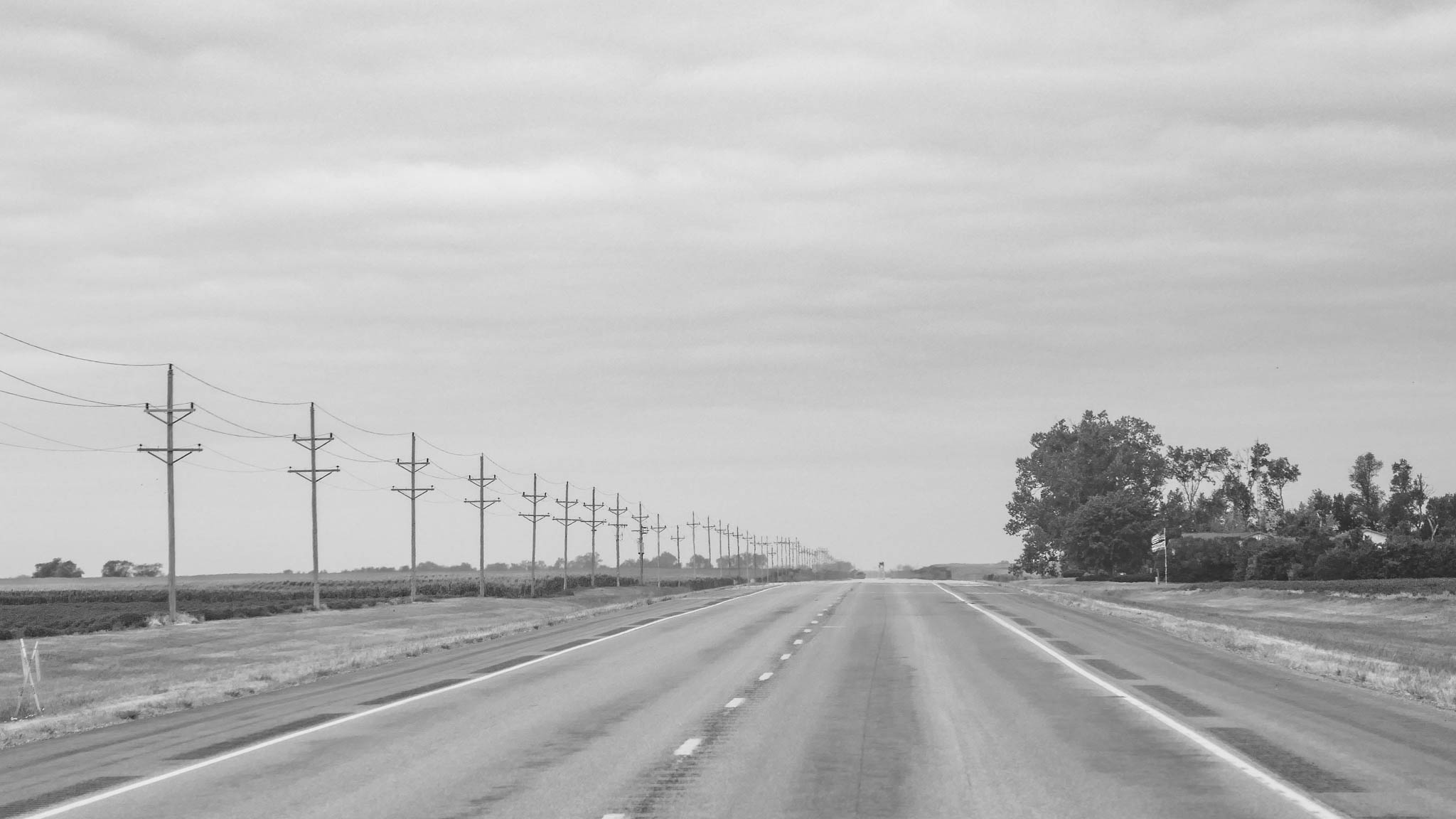 More flat roads, more telephone poles, and the road goes on forever, or so it feels like after three hours of driving these roads. No cars or farm equipment for the last hour, so I pass the time playing Beethoven’s Seventh Symphony, listening my way through all nine of them on a playlist on my phone. Somehow the swells and silences of the great man’s work fit with the wide open plains and the overcast skies. It makes me wonder if somewhere, in one of those white clapboard farm houses, a wife might be listening to Beethoven, too. 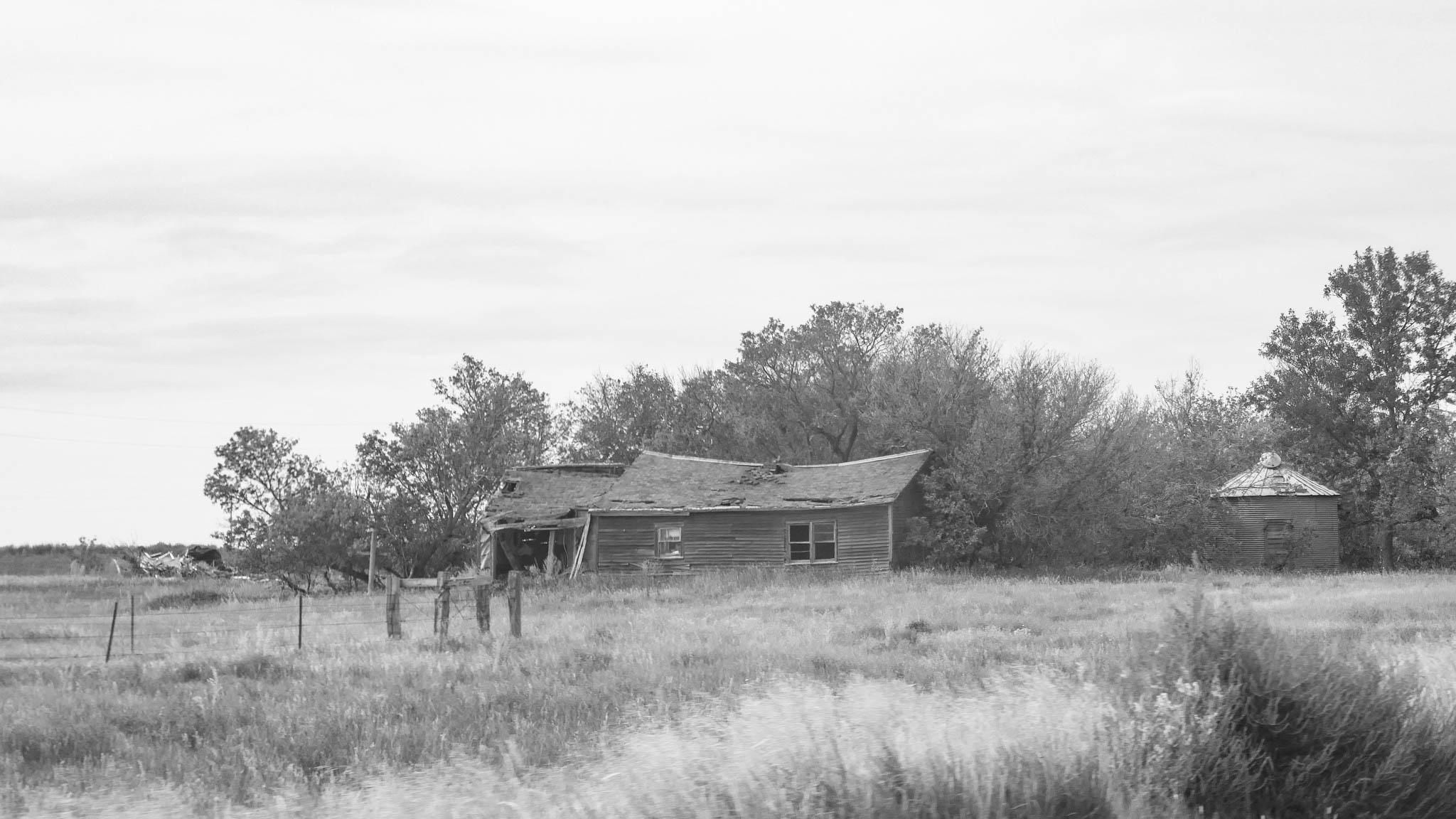 Farming is hard work. When I see broken down barns or abandoned homesteads like this, it reminds me of all those generations of farmers that have worked this land. Some remain, but the demographics in America are turning more urban with each census and each generation. Where will all these farms be another twenty years. Most of the men I saw riding tractors or driving that farm equipment down the road have white hair like mine. 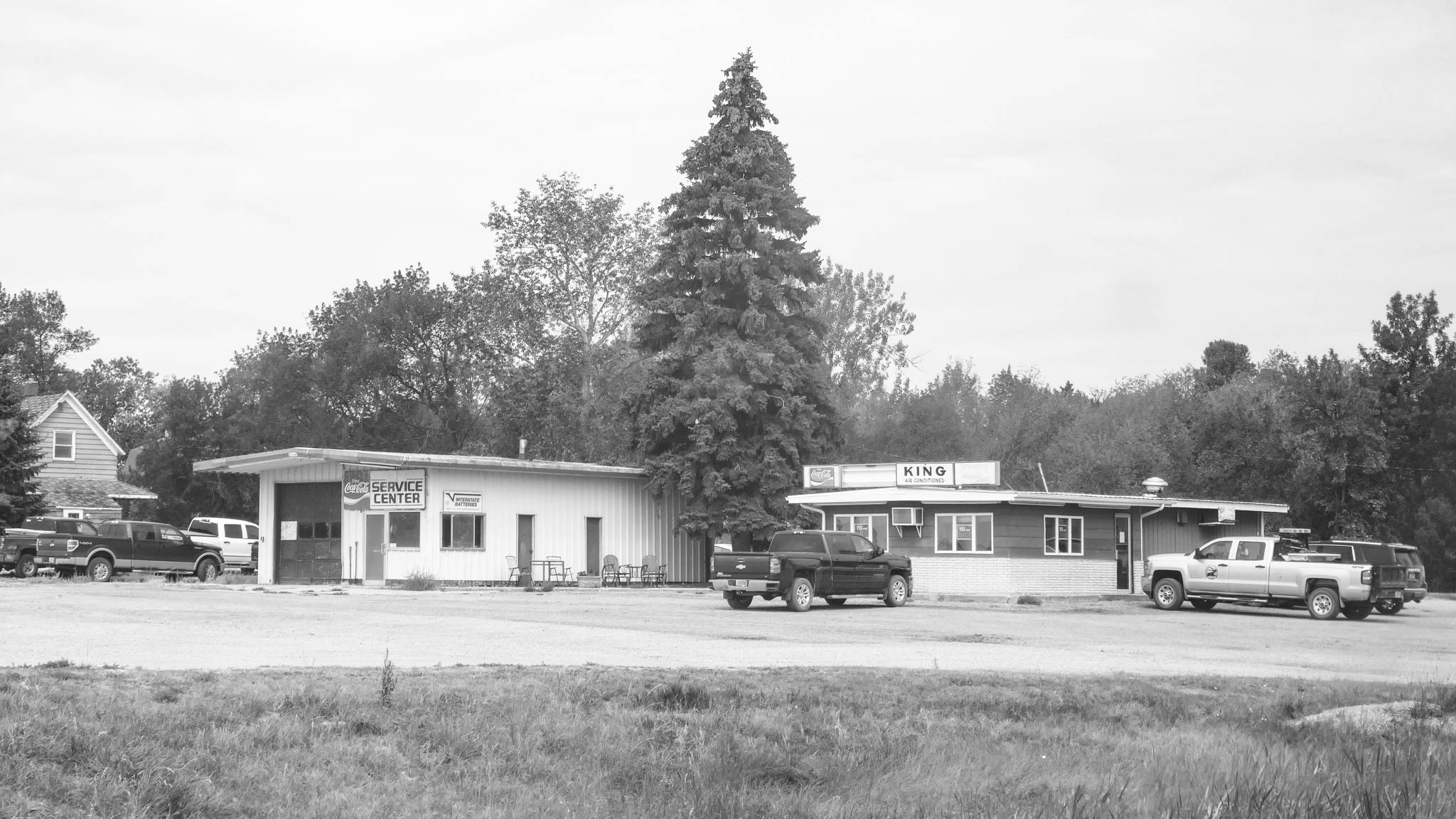 There’s no fast food or strip malls out here on the back roads. There is, however, a lot of road construction. I hit a 15 miles stretch where the lead from one end to the other was a mud-covered white pickup truck. As she stopped our convoy to let the asphalt trucks through, I noticed this dinner and a garage on the right. Looks like it was rush hour round these parts.

Surprisingly, I often had four or five bars of cell service and these tall towers by the side of the road were the reason why. Along with the occasional wind farm, they signal the slow  advance of technology into the heartland. Such connectivity may not keep the kids down on the farm in the long-term, but at least those farms can get connected to the larger world more easily. With farms and friends miles apart, that connection matters. 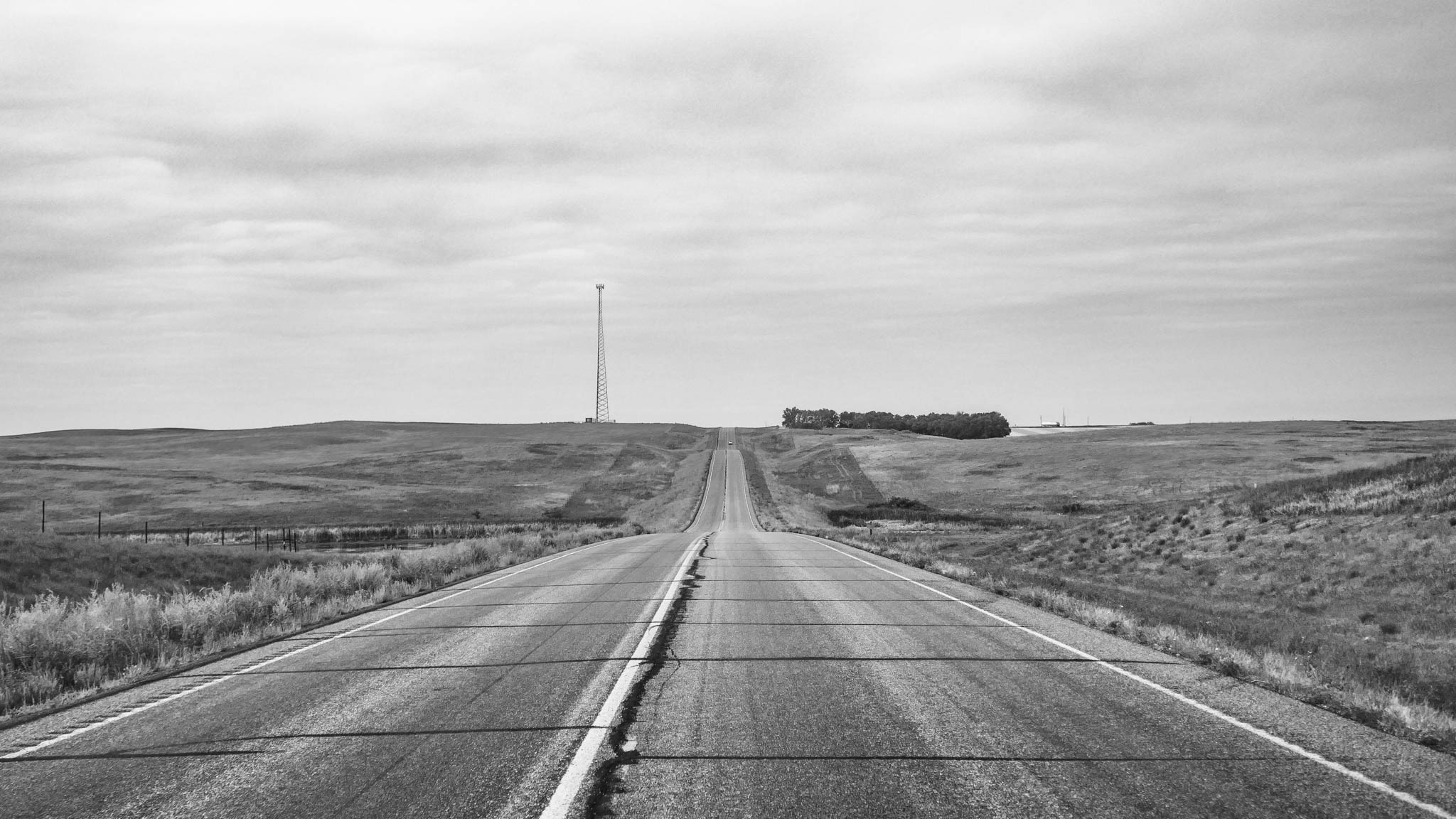 It was a quiet transit today: sun hiding behind grey clouds, Beethoven through the speakers, trucks and pickups whizzing by me at 75 miles an hour. Nothing special happened and yet the day was special. I saw America, the part most people don’t and the part many discount.

The people I met were just like me, getting through the day with caffeine, a joke, and the ever-popular speculation about weather. We’re not so different in many ways. I like to think we can overcome what separates us by seeing what unites us: a smile, a nod, or the wave of a hand raised off the steering wheel as we pass each other on yet another back road in America.

Anybody who has stood on the prairie in North Dakota has felt the force of the wind and knows that our state has an inexhaustible supply of wind power.