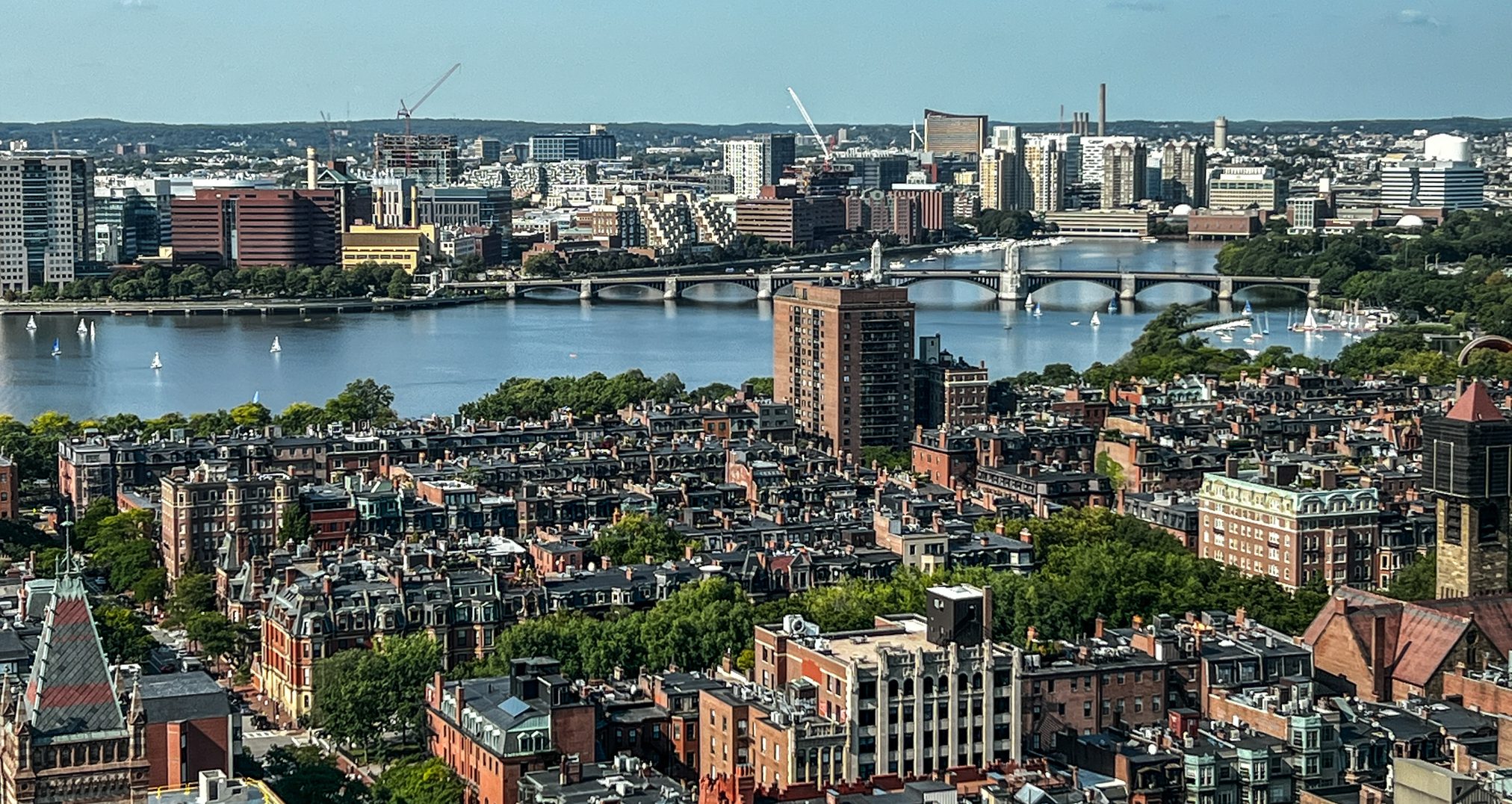 Over the past few months, I’d been trying to convince one of my nephews to meet me in Boston for a long weekend. We have the same birthday month and every few years, we manage to meet up somewhere for a joint celebration. But it wasn’t until he realized the Yankees would play the Red Sox at Fenway Park that he was all in on the idea. Let’s just say he bought the Fenway tickets before he had a flight or a hotel room…

When he finally picked a hotel, the “high floor river view” rooms did NOT disappoint… 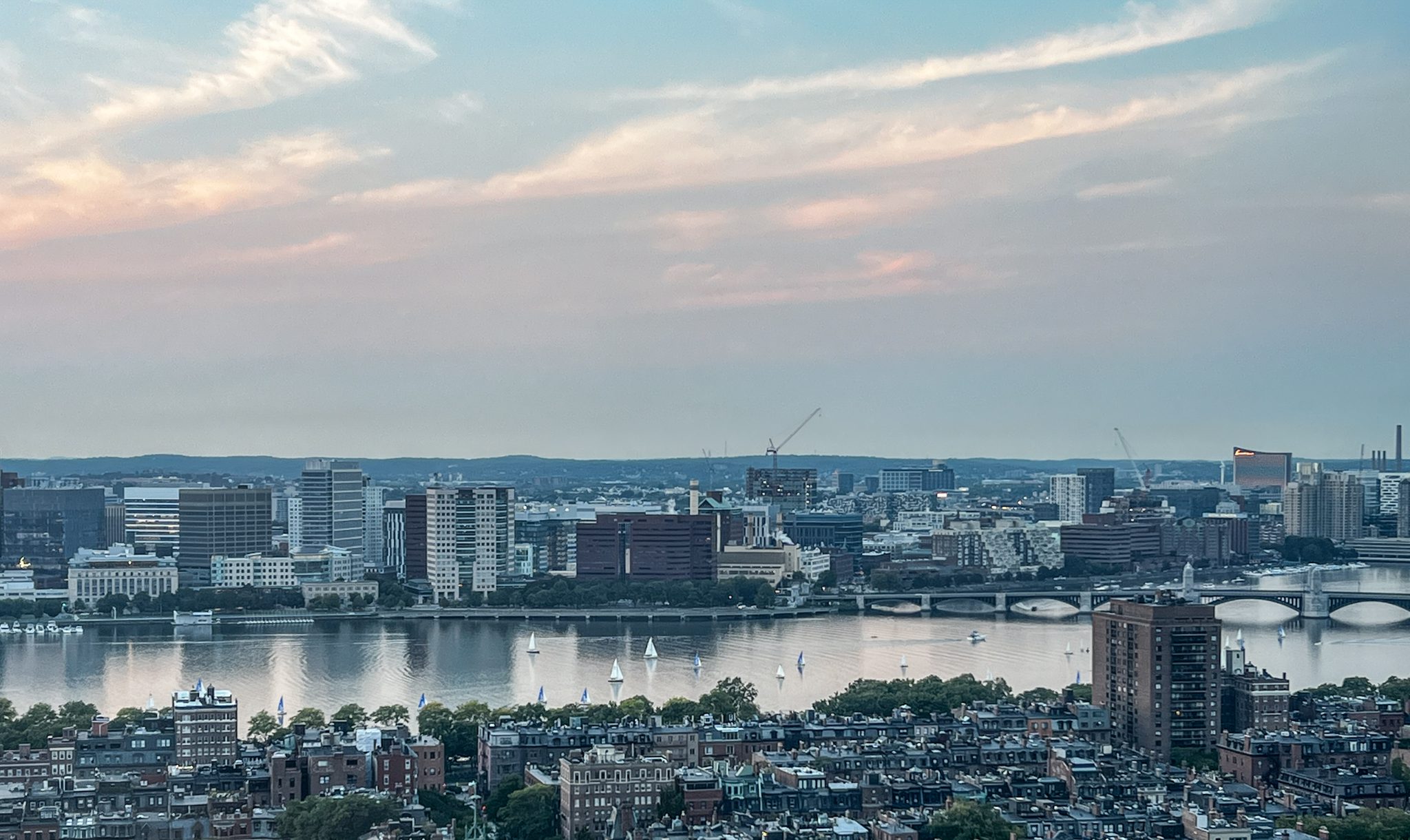 And, yes, there was lobster consumed. Much seafood, in fact, since Denver, where he lives, isn’t exactly known for that. 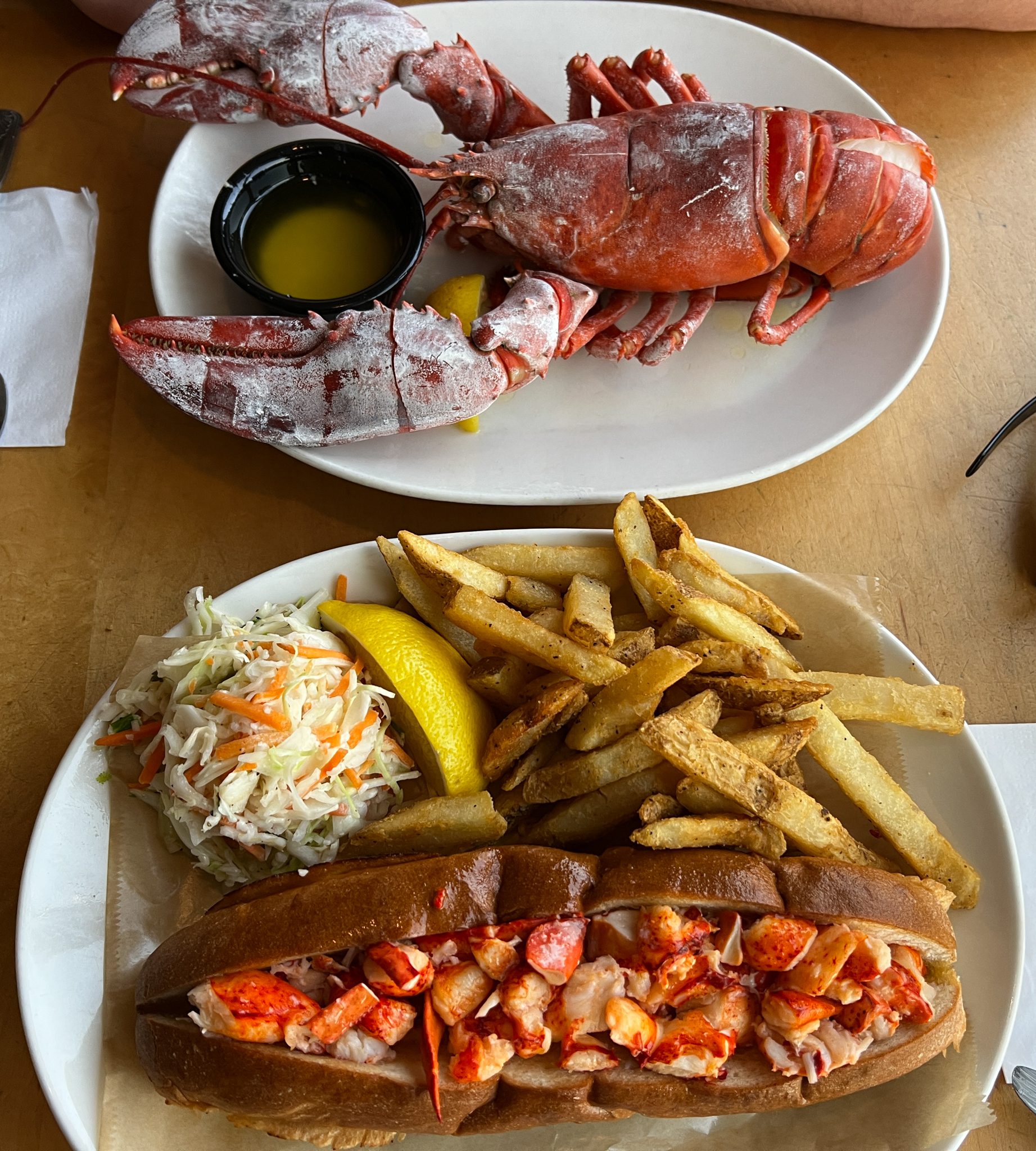 The Best of Beantown

Our first full day in Boston, my Apple Watch told me we walked about eight miles, which sounds about right. I started off the day with a cup of chai sitting in Copley Square Park, watching vendors set up and MTBA employees shuttling people onto busses in lieu of the closed-down Orange Line, as I waited for the nephew to wake up and greet the day from his corner room (river views *and* city views, sweet!). He was impressed by all the old buildings, such as the Old South Church. I have always loved this three-arch entrance on Boylston Street, so I took a picture to remember it by. 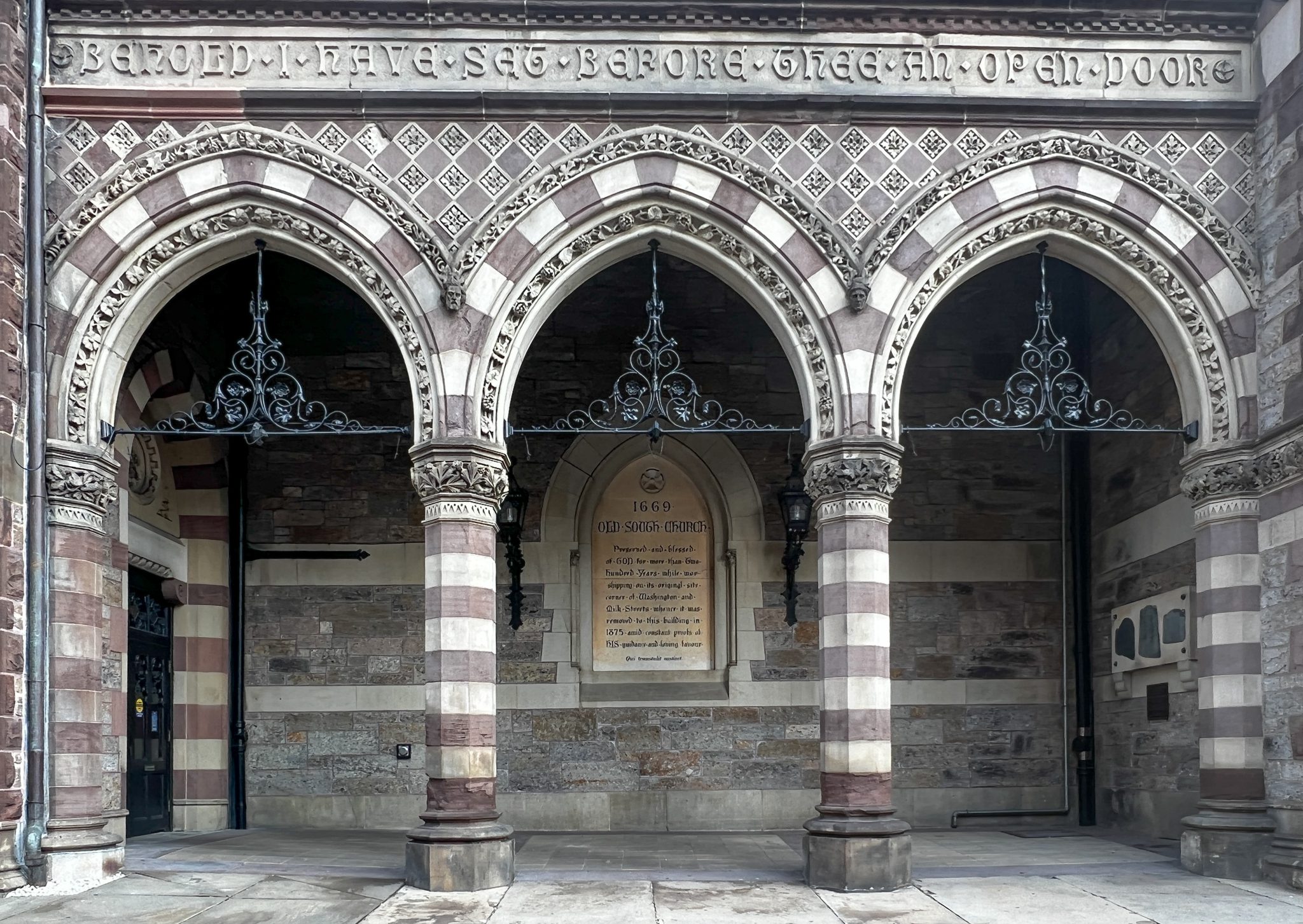 Mostly I had such fun showing him “my” Boston: the places I loved, the streets I used to walk down, and the general vibe of the place. It’s changed a lot in two decades, but things like the back alleys, each signed with “Alley” and a number are still there. 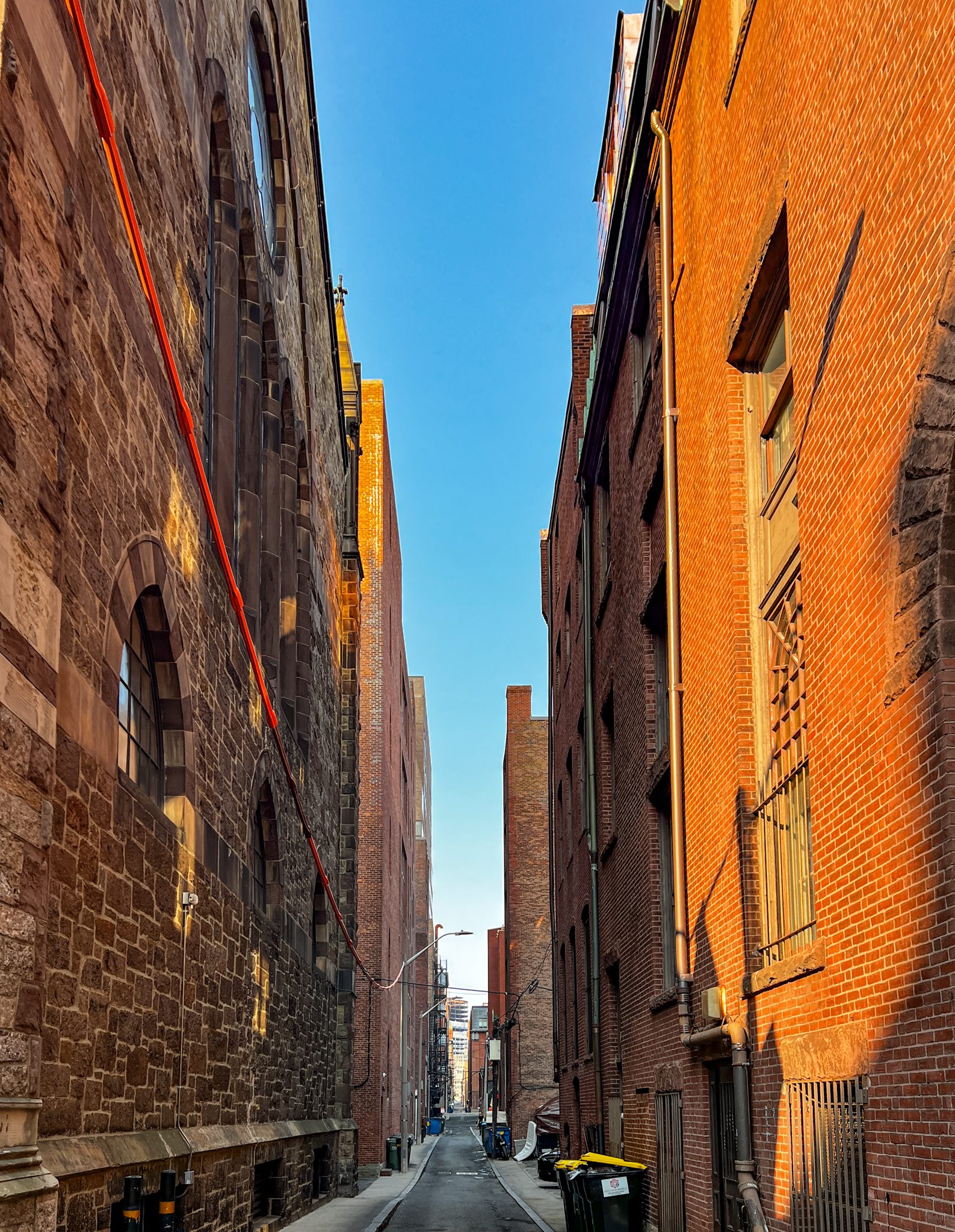 One of the best open spaces near where I lived and worked when I moved to Boston was the Christian Science Center on Huntington Avenue. Those trees provided shade on a hot day and just looking at the reflecting pool could cool me off. It’s still a mesmerizing site, at least to me. 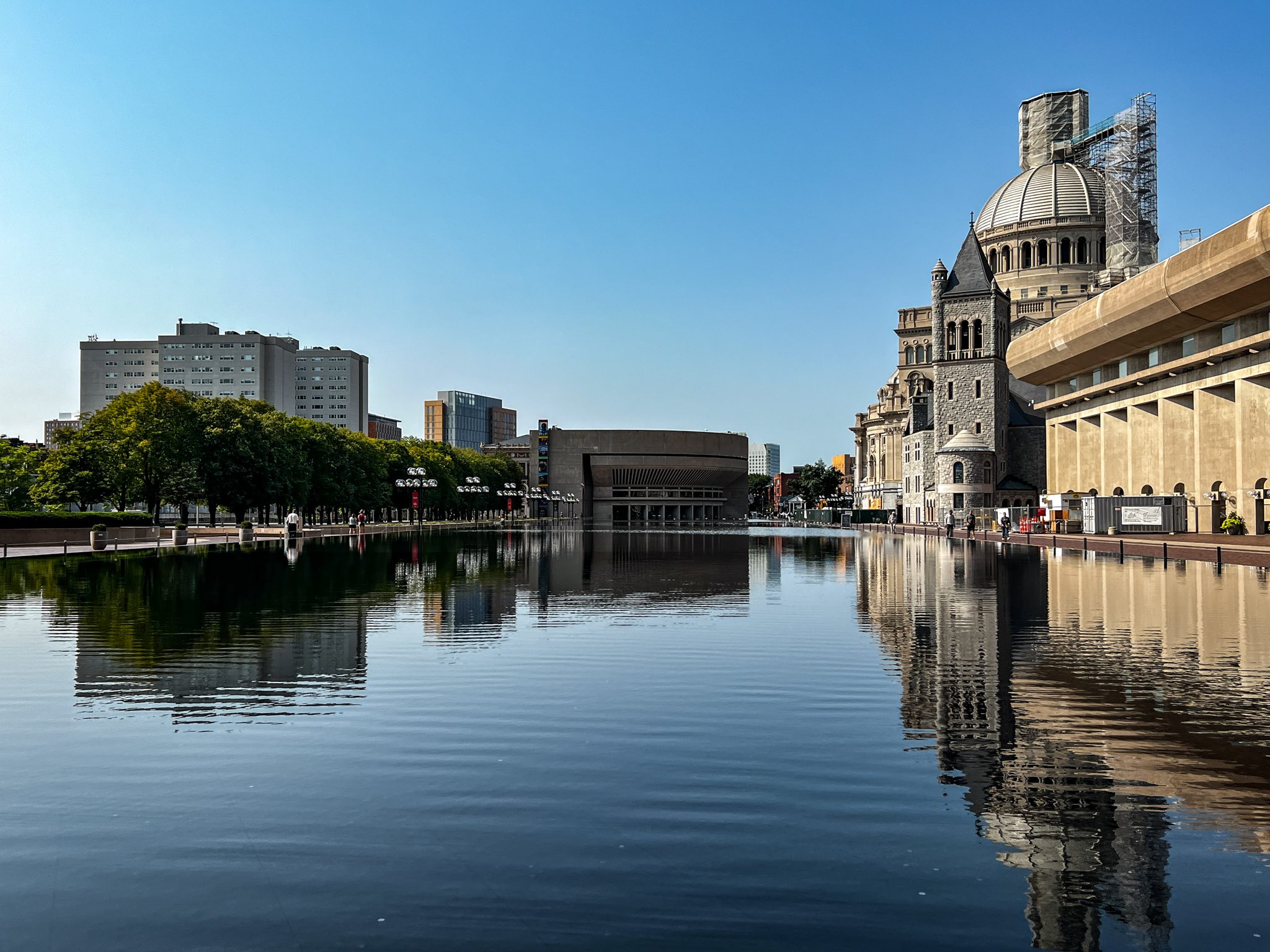 Yes, we did see the Old North Church, at least from a distance, and the statue of Paul Revere. Some history cannot be forgotten, and Boston is a good place to remember the beginnings of our nation and how ordinary people did extraordinary things to earn their freedom. 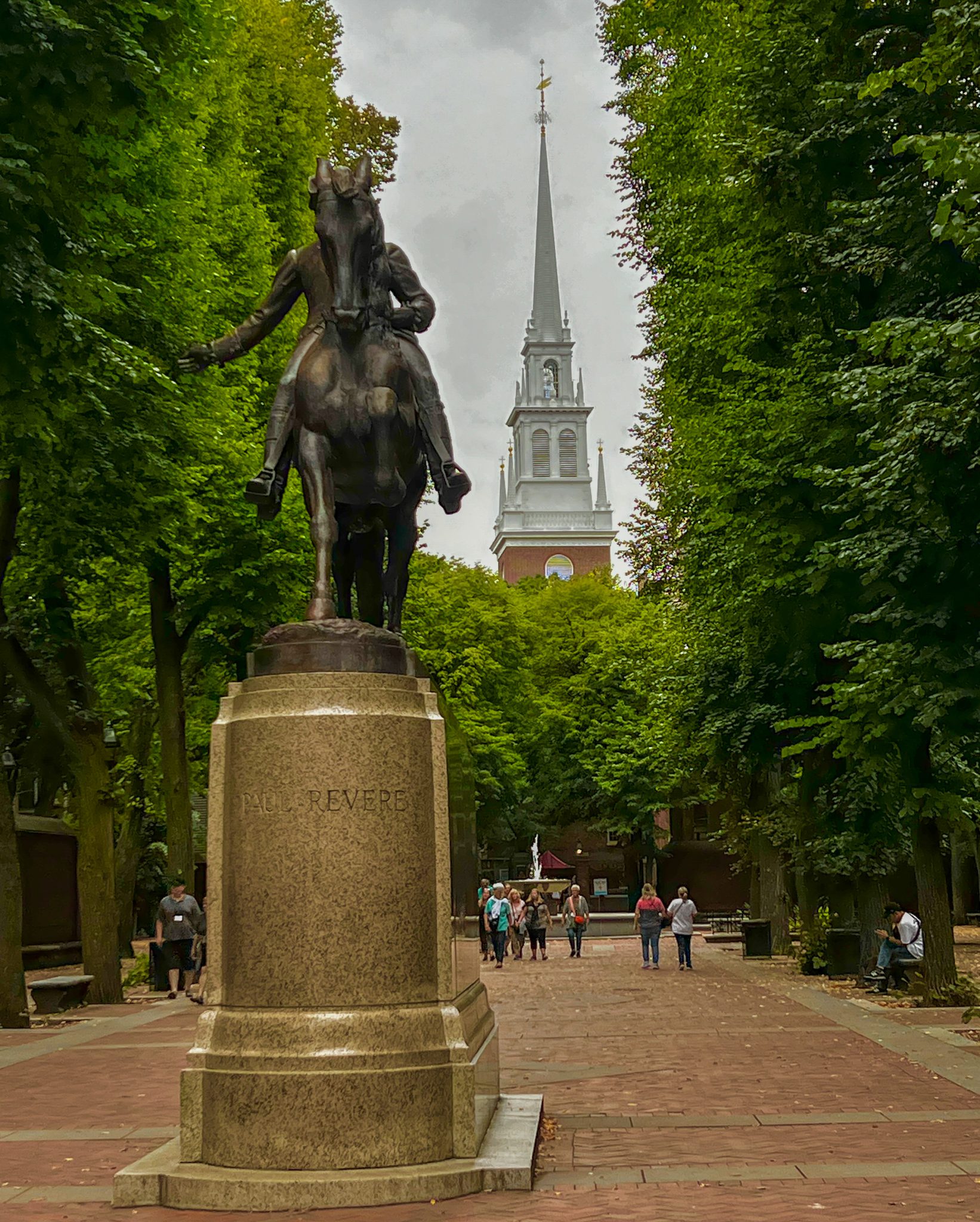 In a rare dereliction of duty as a photographer, I did not take a single shot of the Rose Kennedy Greenway that has completely transformed the North End and the stretch from there down to South Station. I lived through the Big Dig, which made getting to Logan Airport a major challenge, but I moved away in 1999, so I never saw the end result of all that planning, construction, and rehabilitation. It’s amazing. The open space, the light, the lively street scene and tourism, simply amazing. Well done, Boston, it *was* worth all the pain of the Big Dig.

Despite a bit of rain, we braved an afternoon sail on Boston Harbor, which gave me the chance to take about a thousand shots of the Boston skyline. To save you, I managed to pick my favorite one and not show you the other 999 shots 🙂 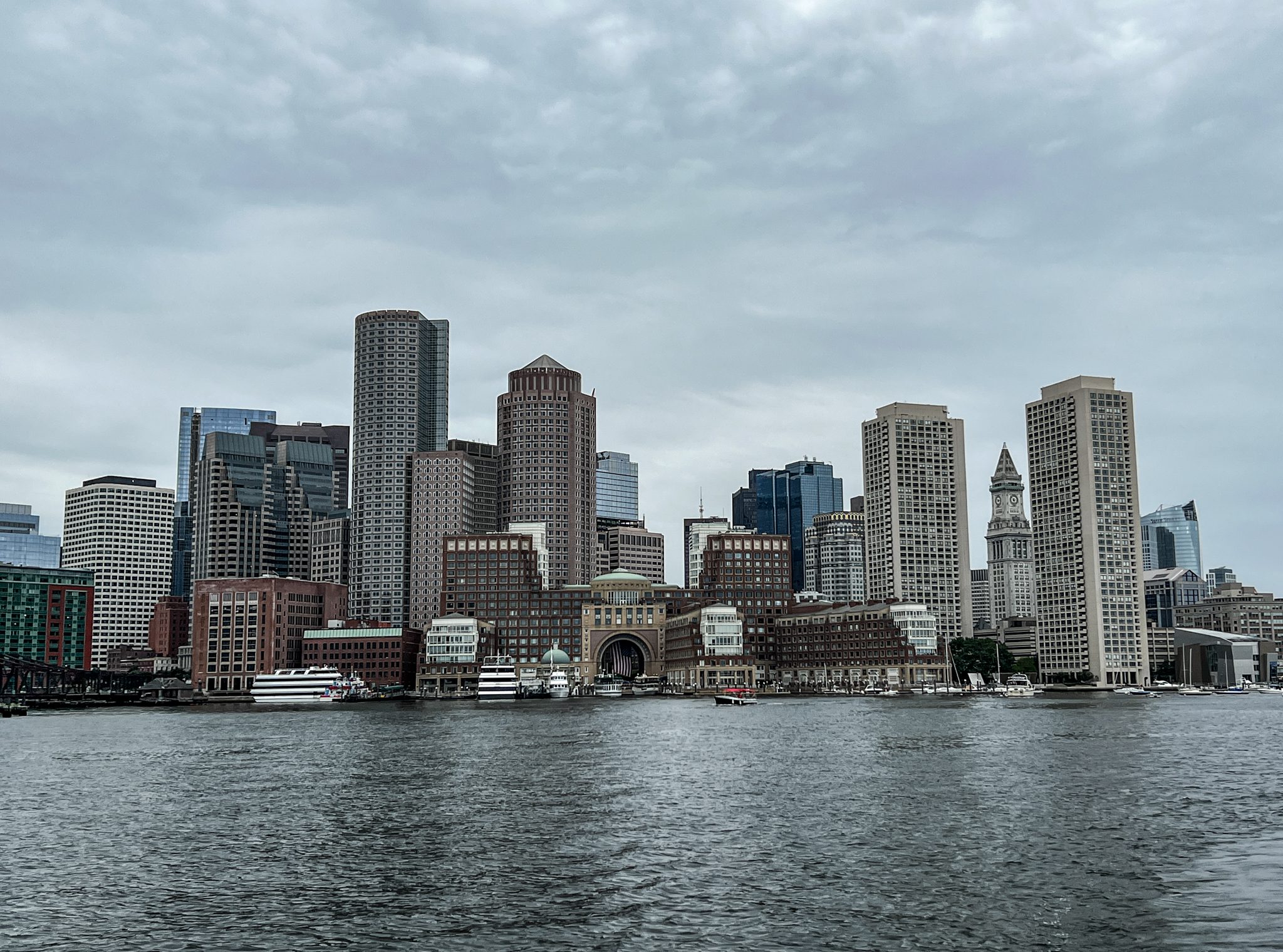 I lived in Boston for 12 years and never, ever, did I make it to the Constitution Museum. I think this is the closest I’ve ever come to that ship. (I lived in NYC and never visited the Statue of Liberty, although I did sail around it once). 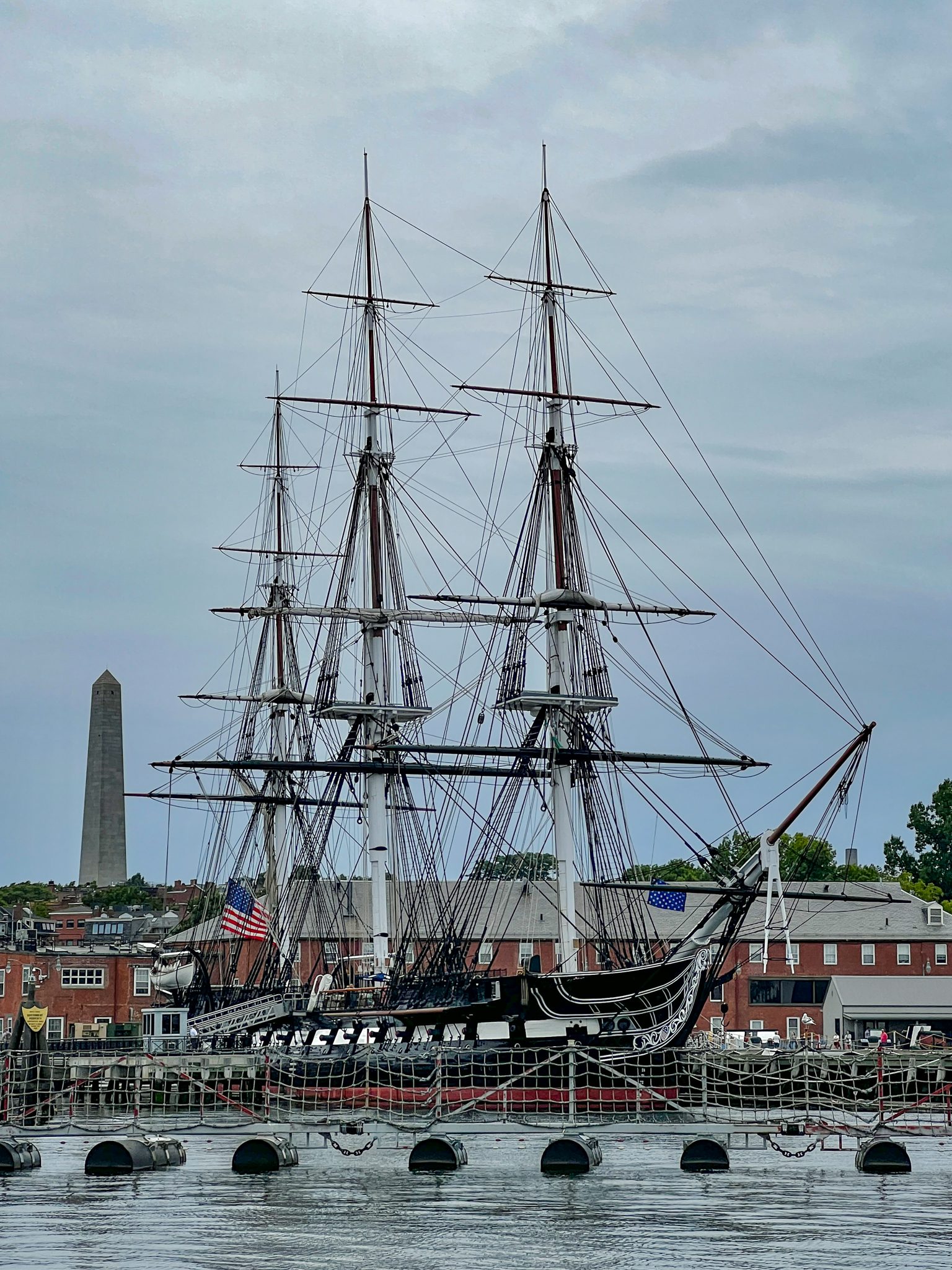 The captain of the little schooner we were on did a nice job of pointing out the sights, including this building that made an awesome reflection of the boat. We look like a several-masted tall ship instead of just the two-masted schoone we really were. 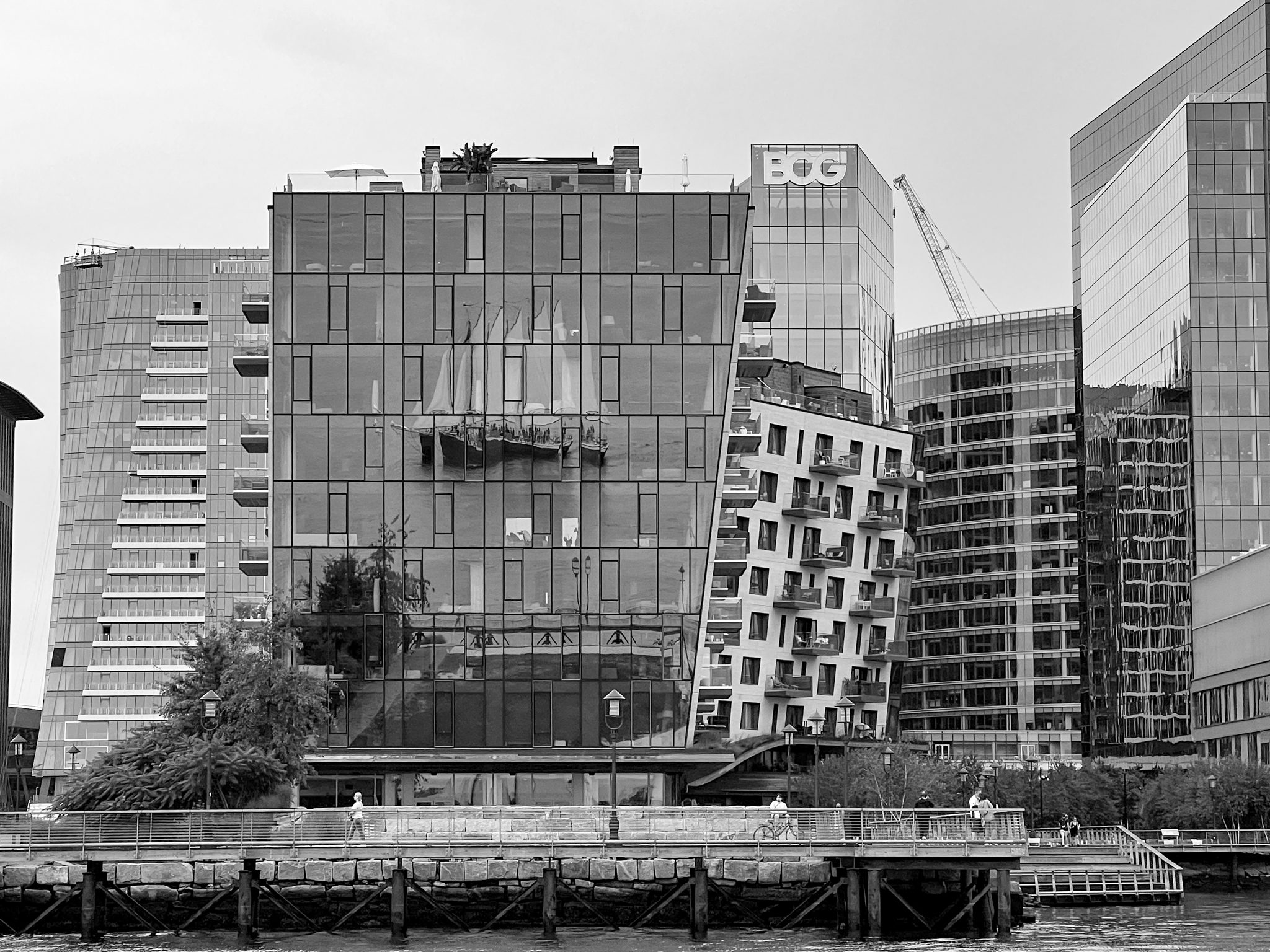 One day, we headed up to visit a friend just over the border in New Hampshire, so the nephew got to see the countryside as well as the famous red Liquor Barn in New Hampshire, just over the state line and just off the interstate. Back when Boston had blue laws that meant no liquor sold on Sundays, the big red barn was where you headed if you found yourself without alcohol on fine Sunday afternoon. (For those curious about dates, I moved to Boston in 1987, when the blue laws closed liquor stores (“packies”) on Sundays. It wasn’t till 1994 that things started easing up. For someone who grew up in California, where you could literally buy a bottle of vodka at 2AM on a Sunday morning, Massachusetts laws were weird. But, I digress…)

We came down from New Hampshire along a foggy coastline so not much to see till we got to Gloucester, where we paid our respects at the Fishermen’s Memorial. 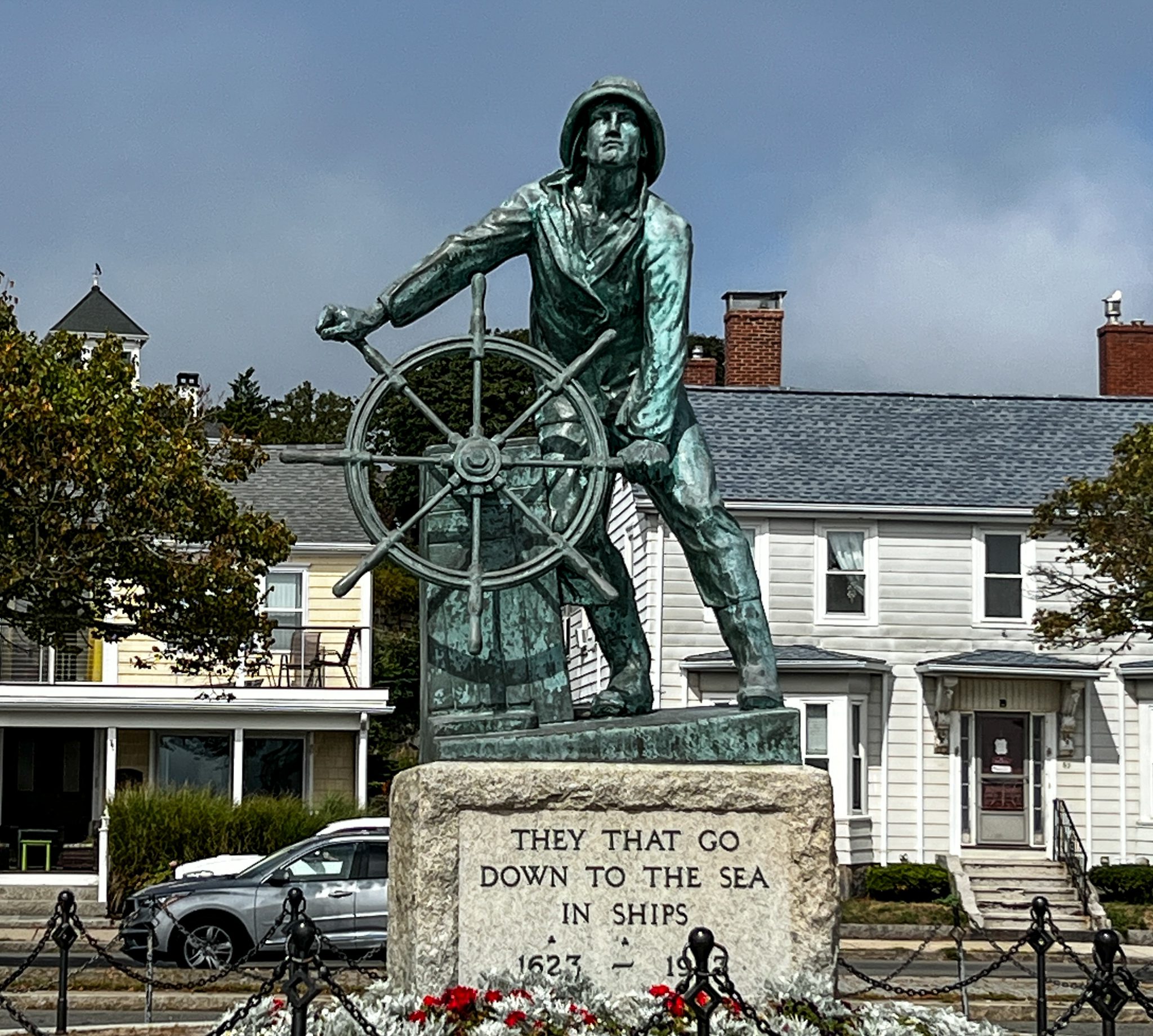 If you’ve never seen the movie, The Perfect Storm, you might want to check it out. While no one knows what actually happened to the crew of the Andrea Gail in that 1991 fall nor’easter, the movie takes a hard look at the fishing life at sea, and also how heroic the US Coast Guard is when attempting a rescue of a small sailboat crew during the same storm. 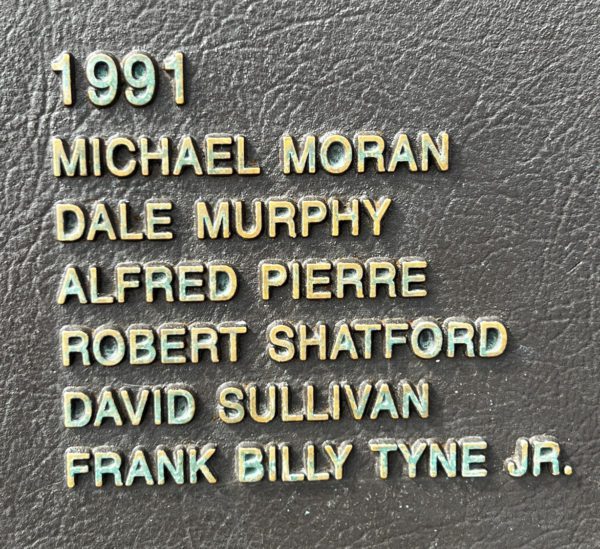 Our last stop along the North Shore was Salem, because, well, witches. Come on, you can’t drive by Salem if you’re giving someone the highlights of the area! We paid our respects at the Salem Witch Trials Memorial and then wandered through the Old Burying Point Cemetery next to the memorial. 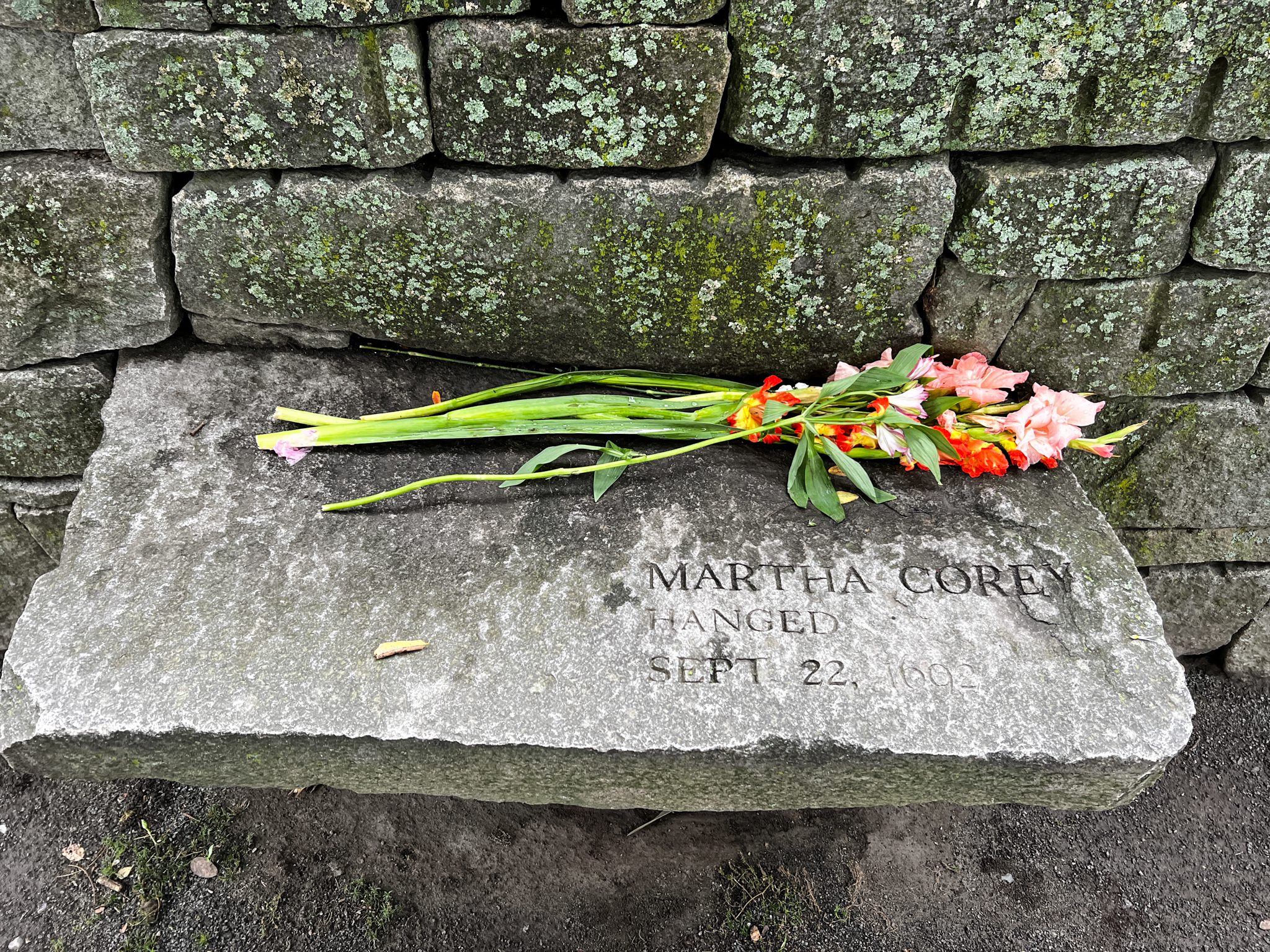 We pulled into the Fenway area about 2 hours before game time because the nephew was that eager to see the place and start the whole Fenway experience. Reserving a parking spot in an underground garage a block from the baseball park was perfect, easy in and out and as soon as we exited the garage, we were in the center of the action. Always a thrill to see the back of the Green Monster and experience the density of the crowds and street vendors clogging the area, just waiting for the gates to open and the game to begin. 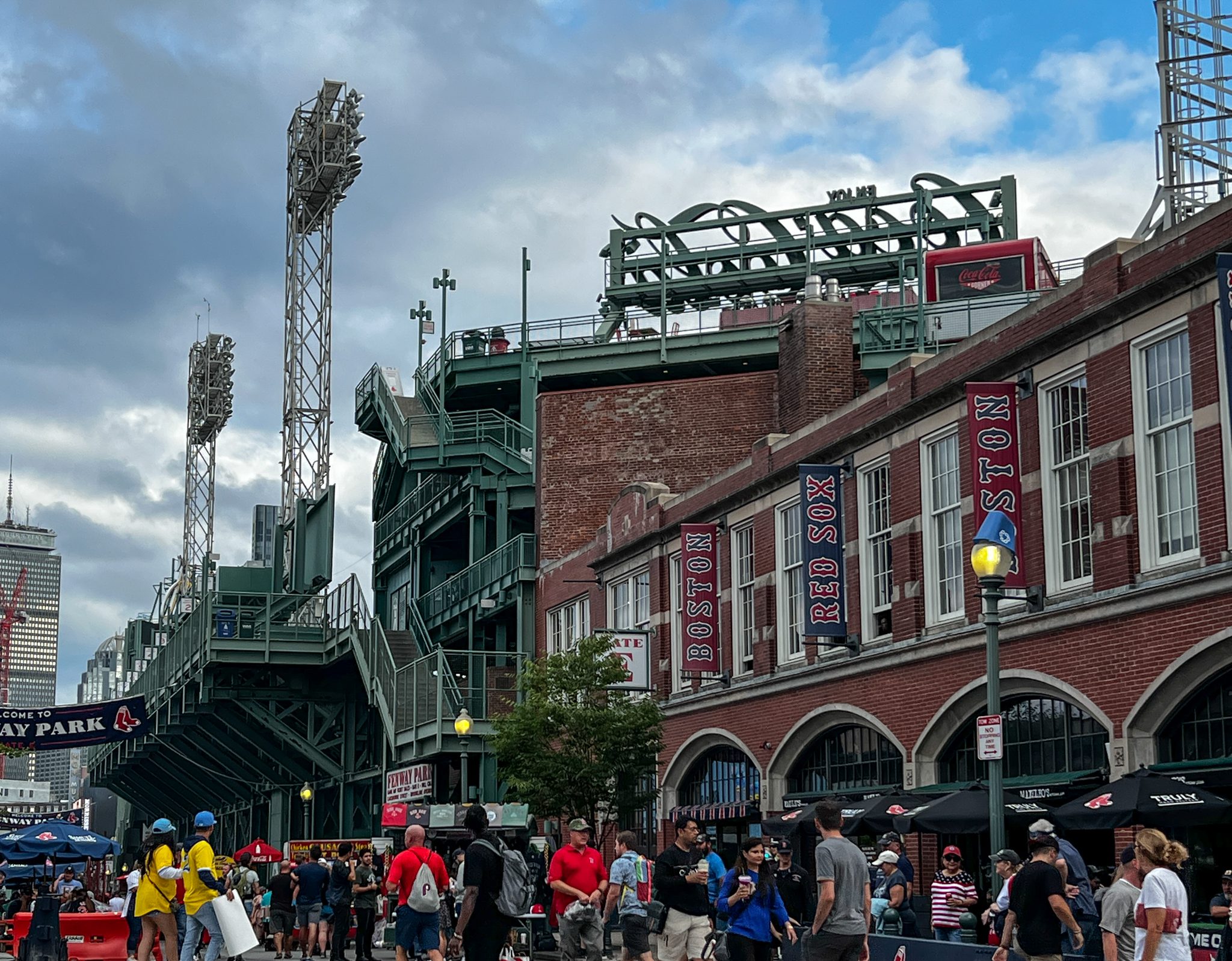 Remember at the start of this post, when I said the nephew had bought Fenway tickets before anything else? Well, he did good. We were just behind the Red Sox dugout and so close we could see the curve of the balls between pitcher and batter. 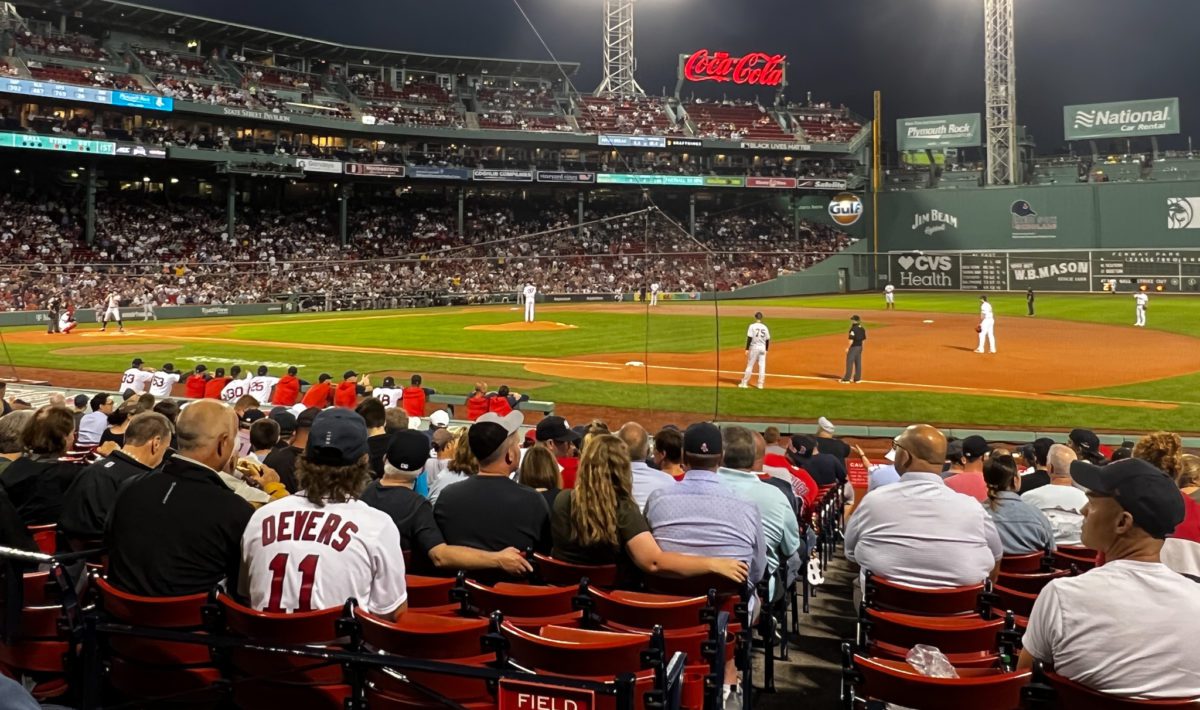 From our seats, we also had a great view of the championship banners 🙂 It was a good game, close until the 10th inning when it all fell apart for the Sox, but we both enjoyed the whole game day experience anyways. (Hey, the Sox usually lost when I lived in Boston, so I was all too familiar with a late-inning crash and burn…) 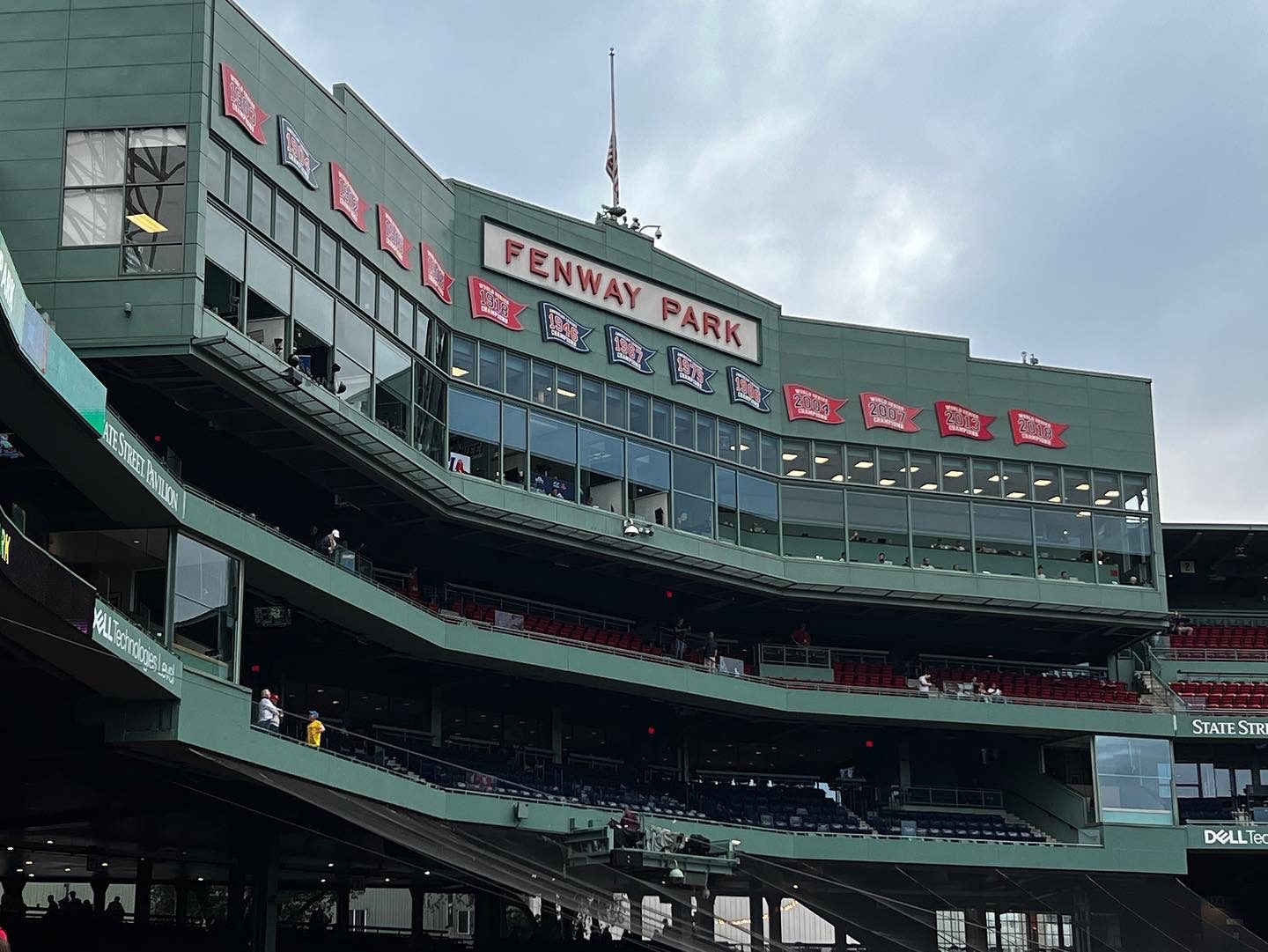 I so enjoyed coming back to Boston and seeing my favorite places while exploring new ones, all of it made even better by sharing it with one of my favorite people on the planet. I used to take him and his brother to San Diego when they were kids, but Boston – well, that was a whole new level of adventure for him, never having seen the Northeast. I’m glad we could make the timing work out.

And, yeah, he picked a good hotel for the weekend. Good night, Boston.

Boston is large enough to learn your independence and small enough to make your own.

Bonus quotation, since I actually had to drive in and out of Boston:

Boston’s freeway system is insane. It was clearly designed by a person who had spent his childhood crashing toy trains.