After starting the month of June in Arkansas, I made a quick stop at Big Spring, Missouri, before surviving the weather weirdness in Illinois and Kentucky that defined my mid-month. From there I had three stops in Indiana before ending the month in Ohio. So, yeah, six states in 30 days. I’m definitely making tracks eastbound.

Other than the National Quilt Museum and Hancock’s Fabric Store, I really didn’t see that much because it was too bloody hot, as my Brit friends might say. Oh, but that fabric store was amazing! So many bolts of fabric, so many layer cake packages and strips, and fat quarters! I spent more than I planned, but I have the material to make two quilts now, which is good because quilting keeps me sane in these trying times. As does taking pictures of pretty flowers. 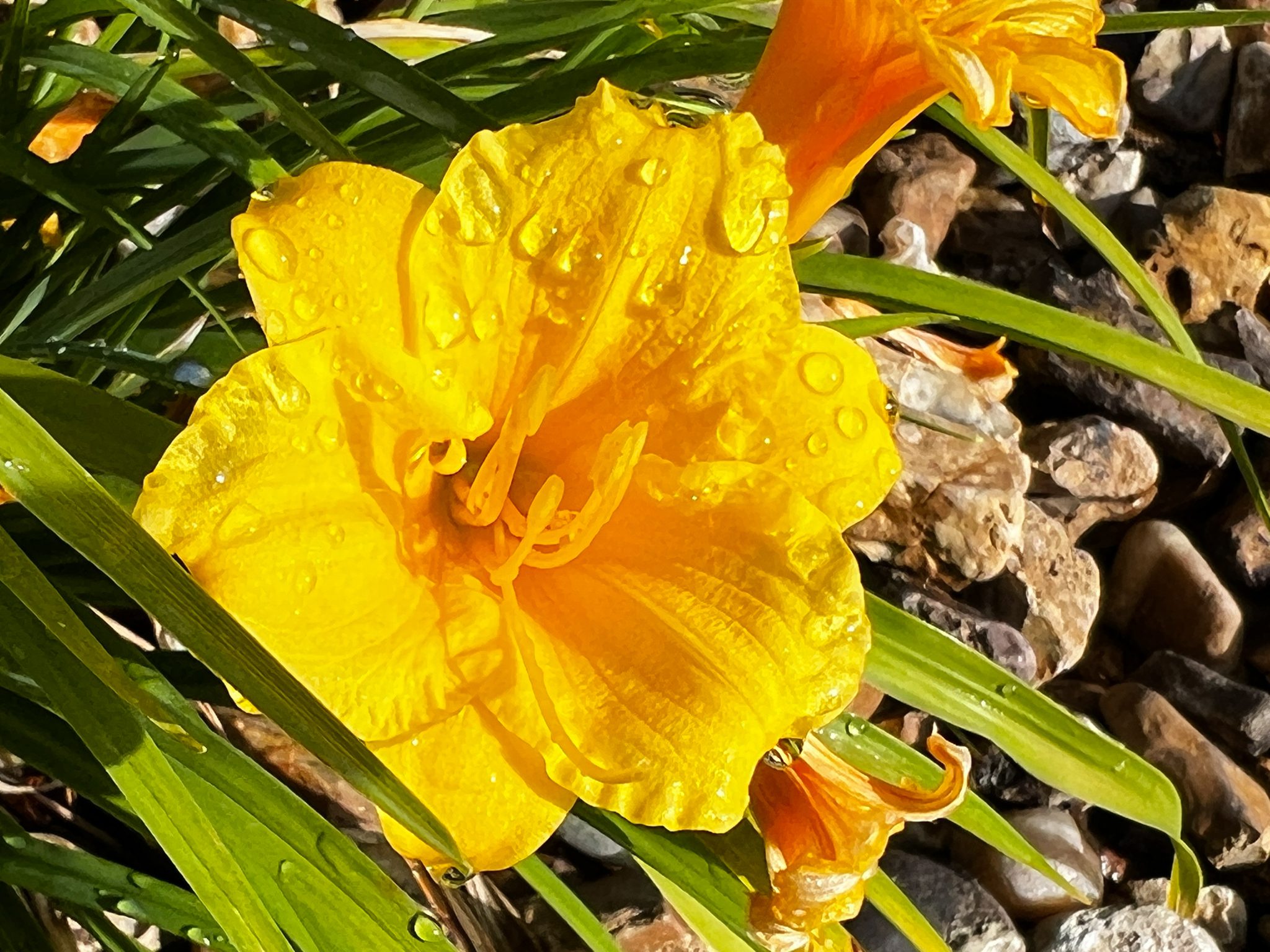 Oh, wait, I did make it to the Walmart, too. So that’s three places I went in Paducah 🙂 Maybe next time it won’t be in the middle of a searing heat dome and I can do some proper sightseeing.

The weather was unpredictable enough that I had booked two nights at a hotel in Evansville, Indiana (not Illinois!). Turns out the weather wasn’t horrible (85F and lows in the high 60s) but the room was non-refundable so I just enjoyed it and the big-screen TV and the high-speed internet that were part of the package. I do enjoy high-speed internet because much of the time I don’t have it. Hotspots pull in signal but it’s a rare campground that sits close enough to a cell tower to provide those blazingly fast 5G speeds you see advertised on TV. 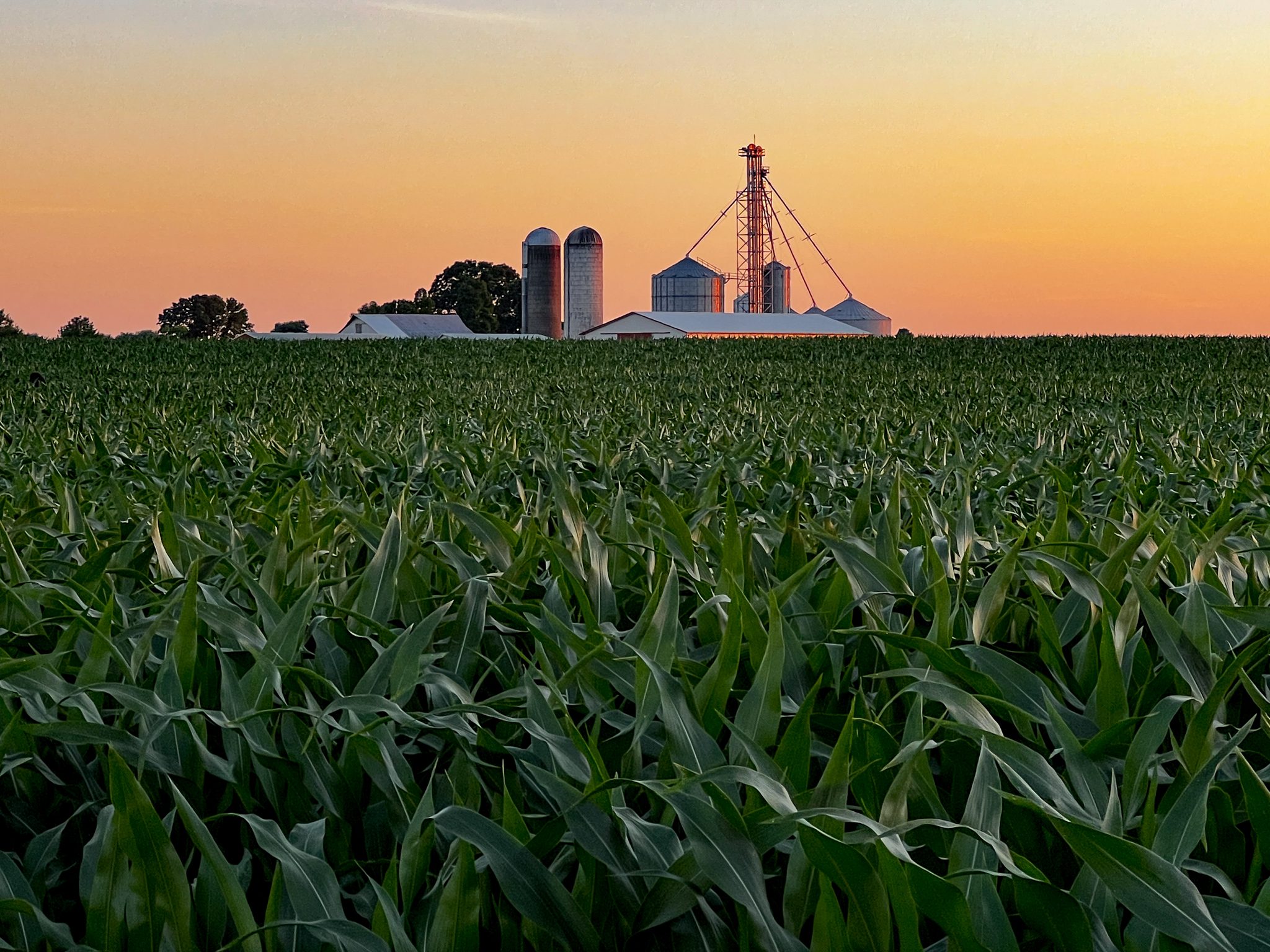 The pleasant surprise for this stop was that the hotel was right next to two working farms so I had some fun every evening taking a walk and taking pictures. And, surprisingly, there were lightning bugs on the strip of vegetation between the big truck repair place and another hotel. I love lightning bugs, they seem so magical to someone who grew up in LA and never saw one until six years ago.

I wouldn’t say this is a tourist destination, although they do have a very nice art museum downtown and a great Mexican place too. The reason I come to Terre Haute is that my oldest friend in the world lives here. We met in eighth grade, the only two new kids in the class at St. Mary’s Catholic School. If that isn’t a bonding experience, I don’t know what is! We went to high school together and then our lives took different paths for many years. But, the magic of the Internet brought us together and infrequent emails and phone calls make sure we stay in touch. It was fun hanging out with her, enjoying her air-conditioned house and big-screen TV. Wow, Star Trek: Strange New Worlds looks REALLY cool on a big screen instead of an iPad screen.

My friend had lost her old dog and adopted a new rescue dog in the five years since I had visited, so every morning, Maya the dog and I headed out for a walk around the neighborhood. As long as she didn’t see a squirrel (or even hear me say the word), she was pretty good company. She didn’t mind too much when I’d stop to take pictures of flowers and I didn’t mind scooping her poop 🙂 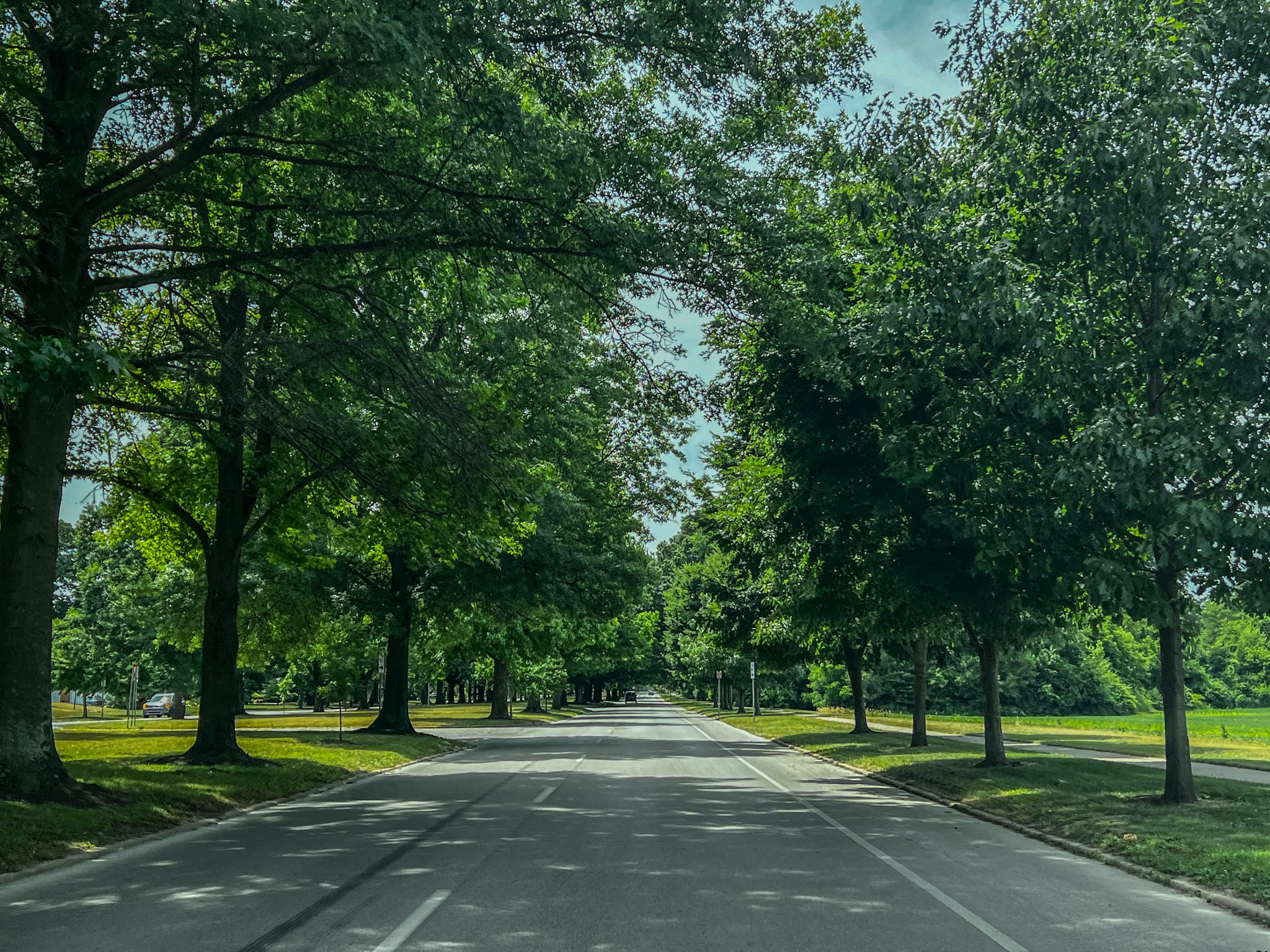 The prettiest street in Terre Haute is Ohio Boulevard, lined with stately shade trees. Pretty much everywhere I drove, I figured out how to get there by going down Ohio because I just loved seeing those trees block after block after block. I even took Maya on a few blocks of this street because I figured she’d enjoy it too. I think she did. 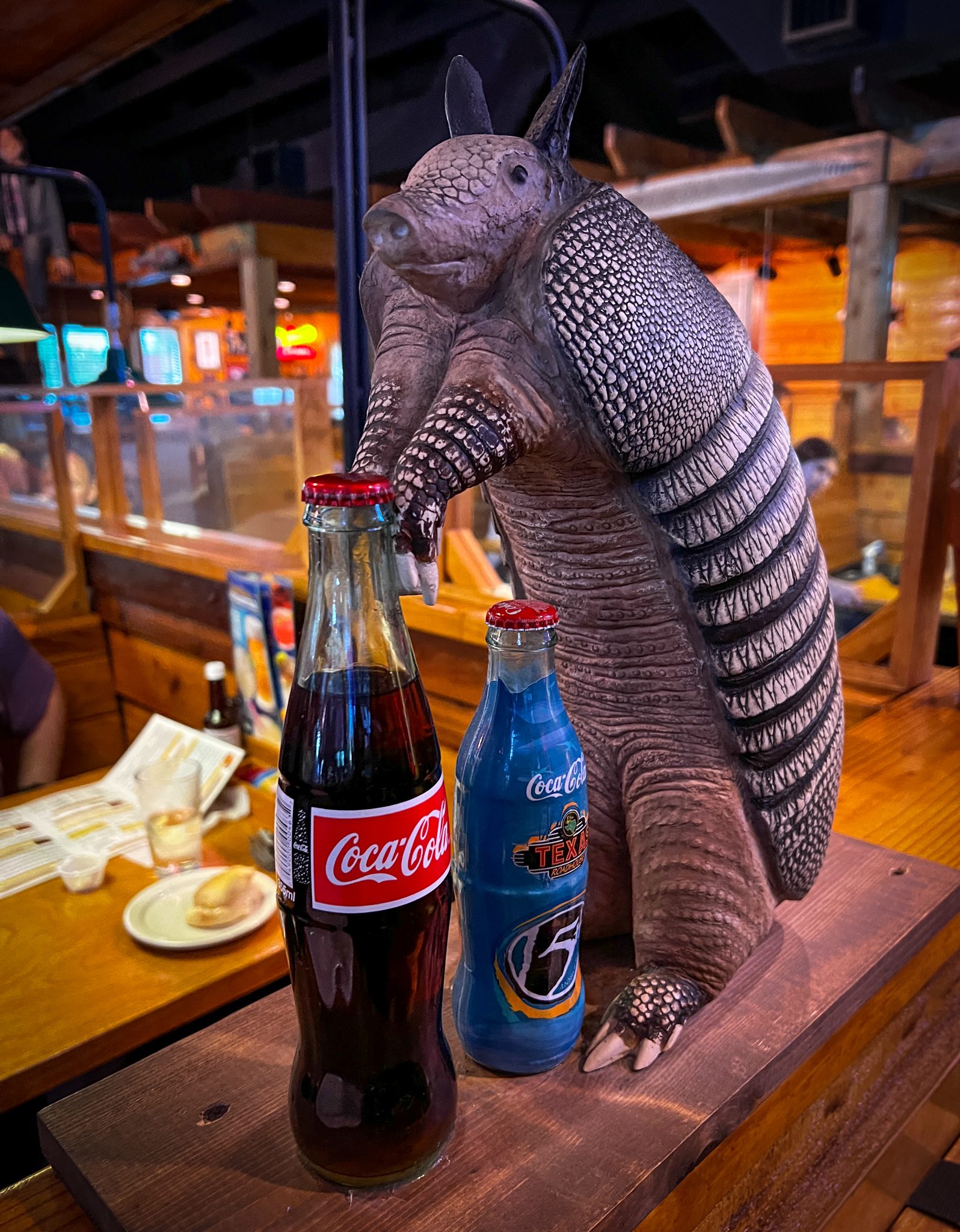 One of my triumphs in Terre Haute was getting my friend inside a restaurant for the first time since the pandemic began. It was noisy and good food and an armadillo was hanging out behind me so of course I had to take a photo of that.

My next stop was just two nights, giving me a chance to dump tanks and put my trailer back together after a week of slumming it, oops, I mean, driveway surfing at my friend’s house. This park had some great hiking trails along with four dump lanes, so definitely a good place. It was also crazy busy on the weekend, no site left empty. Including this site, which had the best Jenga game ever. 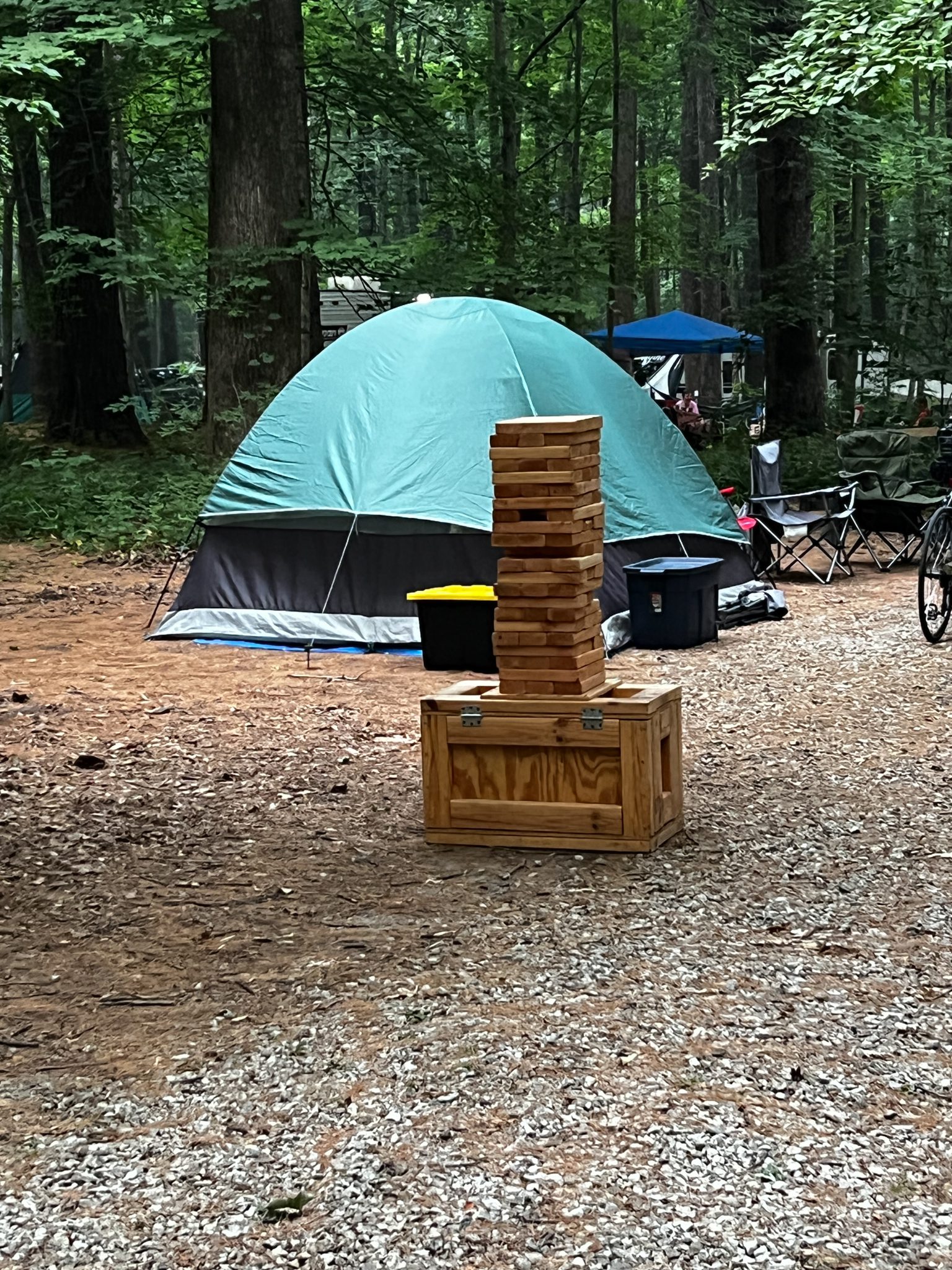 I use a Garmin for navigation, but always cross-check it with Google Maps before I go. The one time, the ONE time, I didn’t do it, I ended up at the wrong place. Ugh. Garmin somehow thought Westwood campground was the same as Summit Lake campround, but it wasn’t. I wasn’t the first one to be led astray by my trust in that little Garmin fiend, as the very nice man staffing the park entrance  just smiled at me and my trailer and said, I think you want Summit Lake not Westwood” and he was right. Dammit. It was another 30 minutes on top of the four hours I’d already driven to get to the real Summit Lake campground. I didn’t have to bother with the Garmin, though; that nice man kindly wrote out the directions for me. 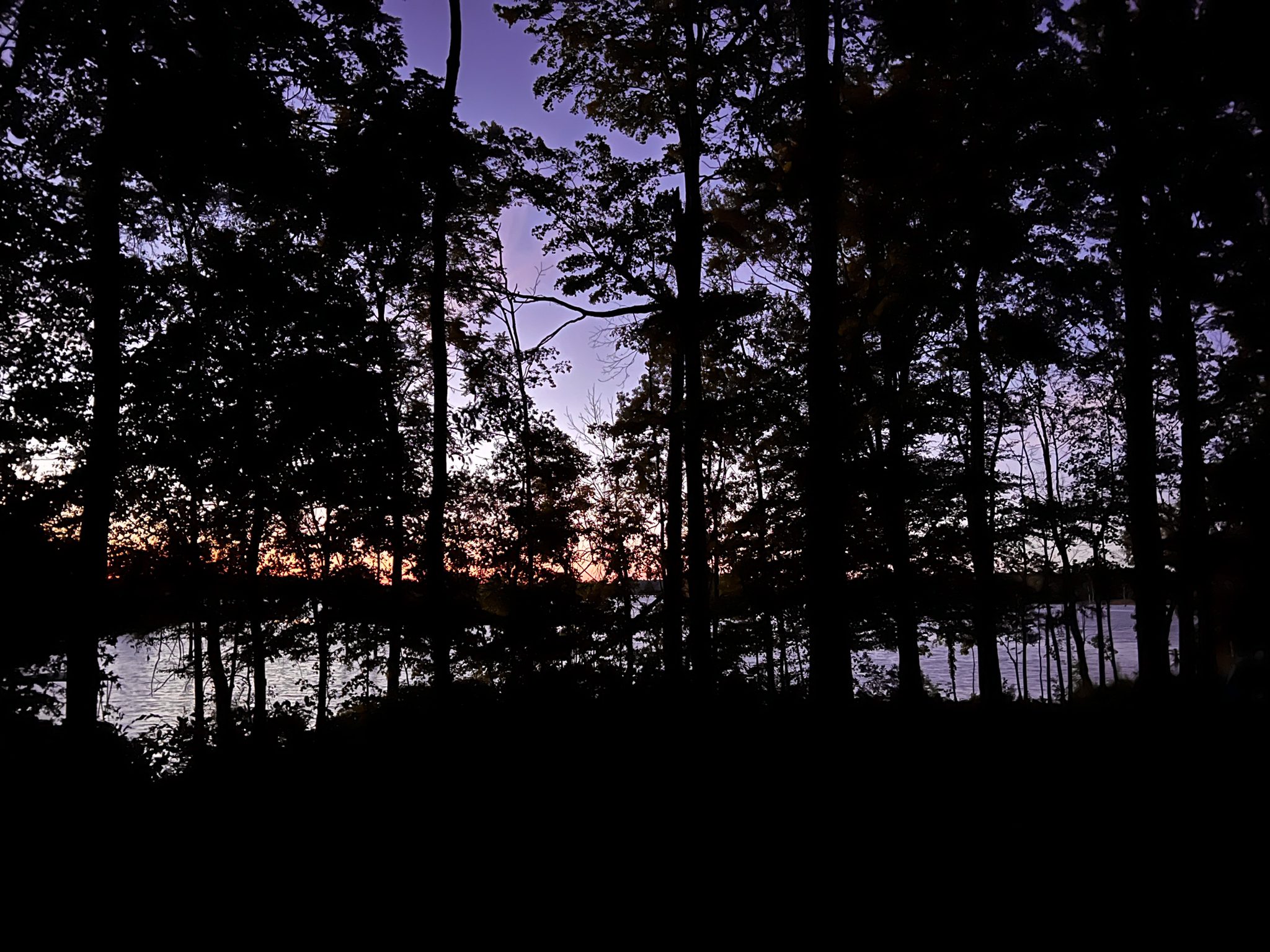 When I finally arrived at my site, I was so happy. It was right next to the lake, in the shade, with a cool breeze that had me popping open three of my four windows. I didn’t bother unhitching for the one night; the trailer was level enough. I did wish I was going to stay longer here, and someday I just might.

This was my second time at this state park north of Columbus, and I knew enough to switch sites a week before when a shady spot opened up. When the temps climbed into the high 80s, that shady site was perfect. 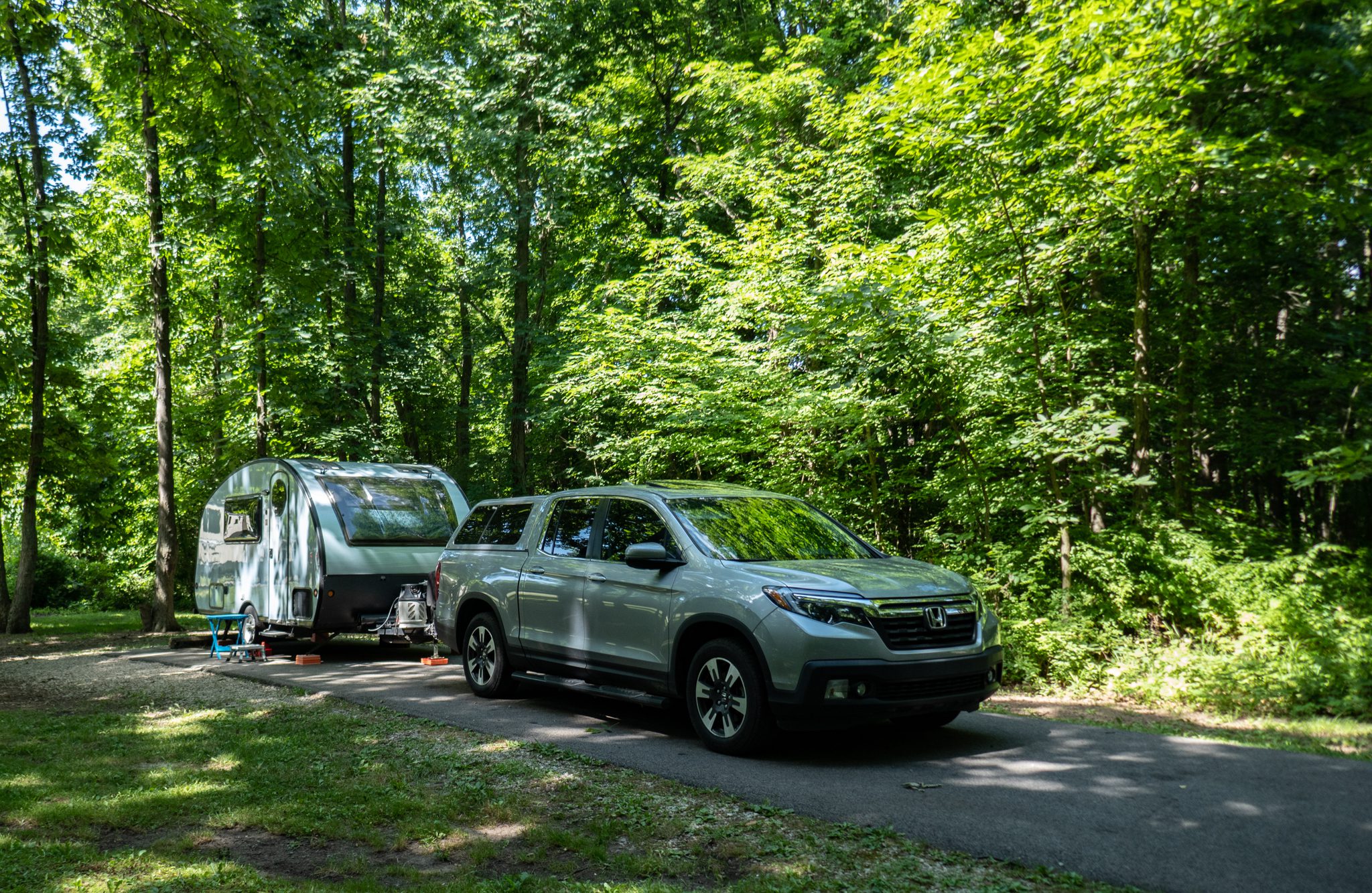 This post is just June, but I’m going to slide in one photo from July, taken on my last night at Delaware State Park. I was walking the road admiring the clouds when I realized there was a deer, complete with the classic “in the headlights” look, trying to pretend I wasn’t walking towards them. I stopped long enough to snap a photo and that spooked the deer enough to bound off into the woods. 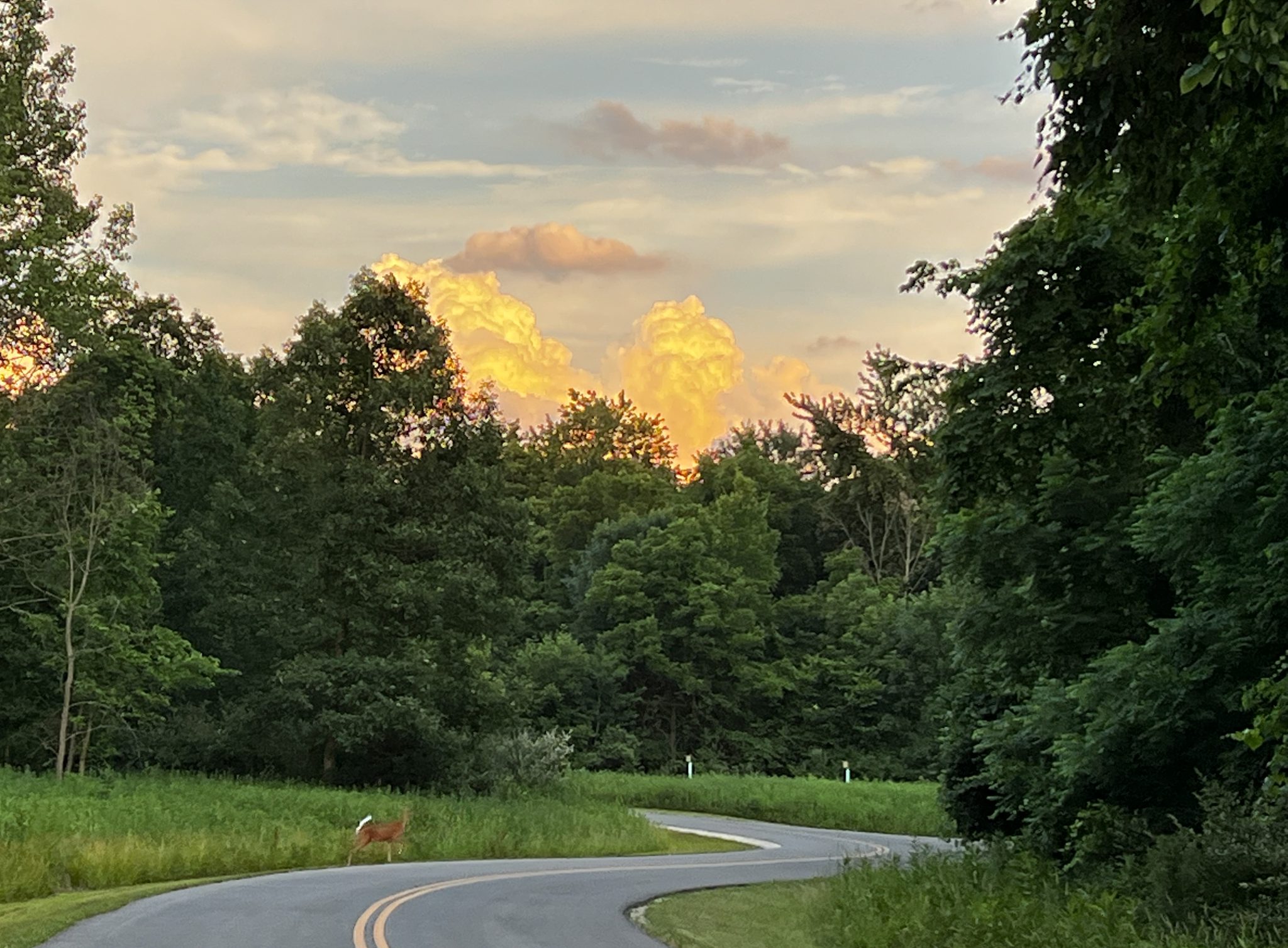 To sum it up, June started off pretty weird, and I was kind of burned out from weather woes, but by the end of the month, I had rediscovered my vagabond mojo and was looking ahead to all the new places that July would bring. Onward and eastward!

Do not anticipate trouble,
or worry about what may never happen.
Keep in the sunlight.