Oh, 2022, who would have guessed you’d be the year of weather weirdness. But here we are, half a year in, existing under a massive heat dome over much of the Plains, Midwest, and South. On June 11th, my phone started spitting out heat warnings on a twice-daily basis and they didn’t stop coming till the following Thursday afternoon. My move east to southern Illinois had started out so well…

It was pleasant enough that Thursday, when I arrived at my new campground. People were sitting outside, me included, enjoying the light breeze and a temperature in the high 70s. A quick peek at the weekend weather didn’t bring good news, though; things were going to heat up. A lot. Like 10-20 degrees (F) more than normal, for most of the next week. I figured I had a nice shady spot and good electric power, I’d see how things went on Saturday and Sunday and if the forecast changed for the better (yes, hope does spring eternal…) 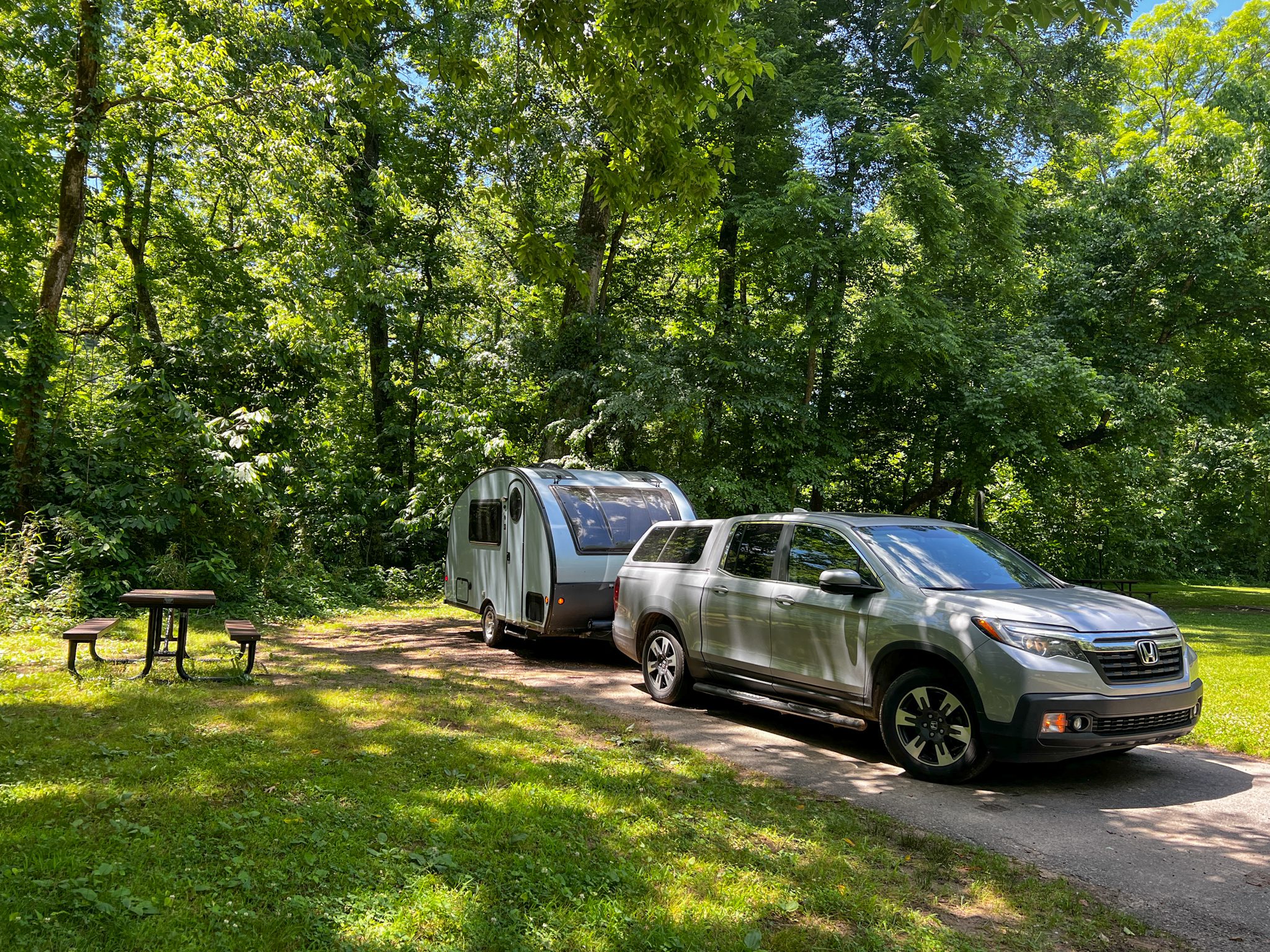 To be honest, I was more preoccupied with the fact that I had somehow landed in Metropolis. Yes, THAT Metropolis, as in Superman, the Man of Steel. On the exact weekend that Metropolis was holding the annual Superman Convention. 40,000 people attended the last one in 2019. On the heels of a (hopefully waning) pandemic, who knew what the turnout would be. 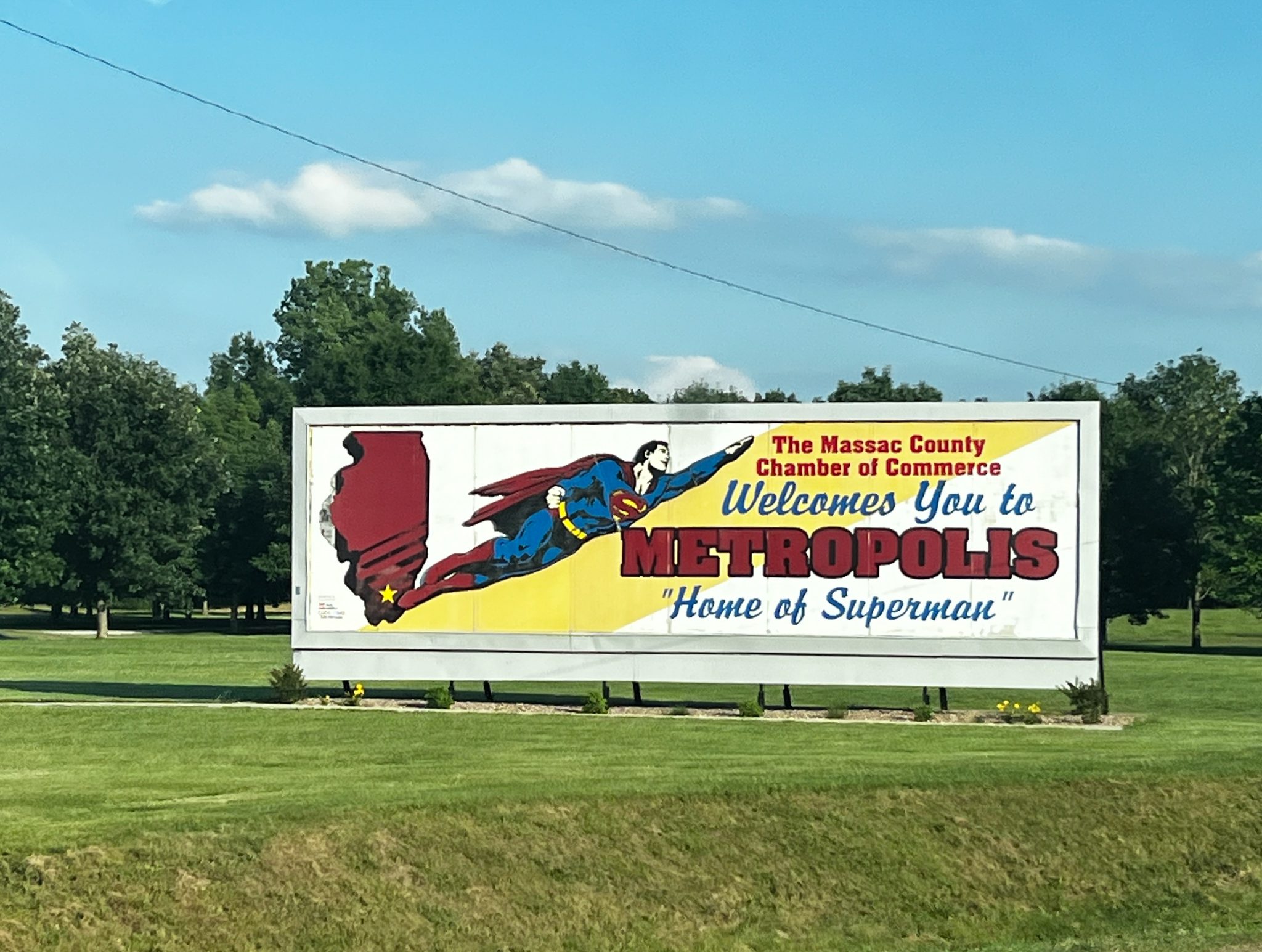 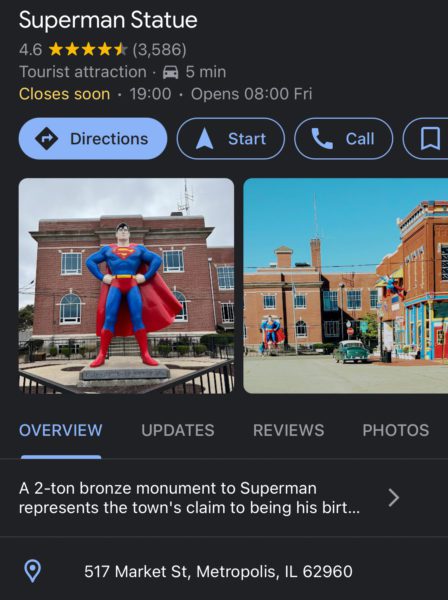 Tursn out on Friday, the first day of the Superman Convention, it was absolutely bonkers to be anywhere near that statue. Zero parking, as well. So I quickly exited that scene and instead went to pick up some groceries. At Big John’s supermarket. This town clearly loves big statues of fictional characters. (I have since seen a few more Big John statues and supermarkets in Illinois!) 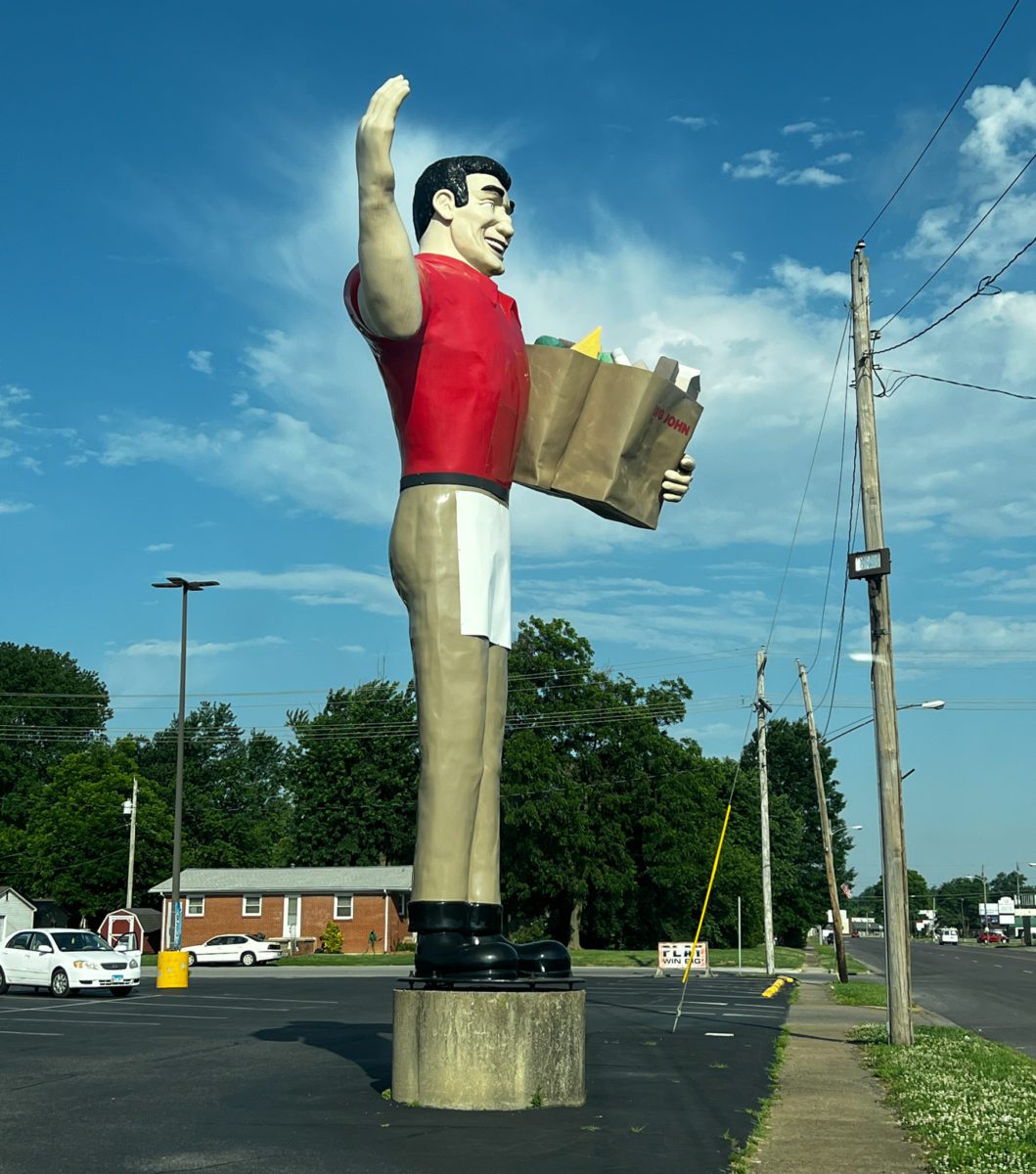 But, back to the weather. Saturday slid up into the mid-80s but it was decent as far as the humidity went. With some A/C and staying inside the Alto during the hottest part of the day, it was definitely OK. Not great, but OK. I thought, yeah, I can do this. And then, late in the afternoon, I looked at the weather to the west of me, and saw lots of high temperature records being set . Uh, oh. I checked my local forecast. Not good news at all. On all four weather apps I use, things had changed a lot, as in a lot hotter. And a new-to-me kind of weather warning: Excessive Heat Warning.

As I’ve already established in a previous post (Weatherbeaten, which at the time I wrote it, I did not anticipate having a sequel), I am not a heat person. I went to bed Saturday night with the A/C cycling just a bit to keep things at a nice, comfortable 72F inside the Alto. Sunday morning, I woke up to a way different forecast than I’d seen the day before: 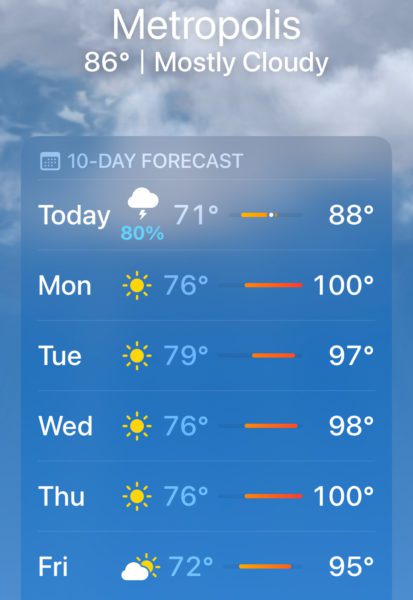 Yikes. The forecasts had the heat index at 100F on Sunday, rising to 105-110F by Monday and lasting most of the week. I was pondering how bad that kind of heat would feel as I went out for my morning walk. It was already 80F and pretty humid. Metropolis had one last surprise for me: the annual Super Car Show, held during the annual Superman Convention. This must be the biggest freaking weekend of the year in Metropolis.

Besides all the Corvettes (assembled the next state over in Bowling Green, Kentucky, you see a lot of Corvettes in the South), there were a few vehicles whose owners went all in on the whole Superman theme. Like this one. Does that hood lining stay on all the time? My truck hood lining looks like it’s had some adventures in its two years, so I’m not sure how a Superman lining would do. But, hey, maybe it’s as strong as Superman and then the little rodents couldn’t get to my wiring next time I’m camping in the Southwestern desert. 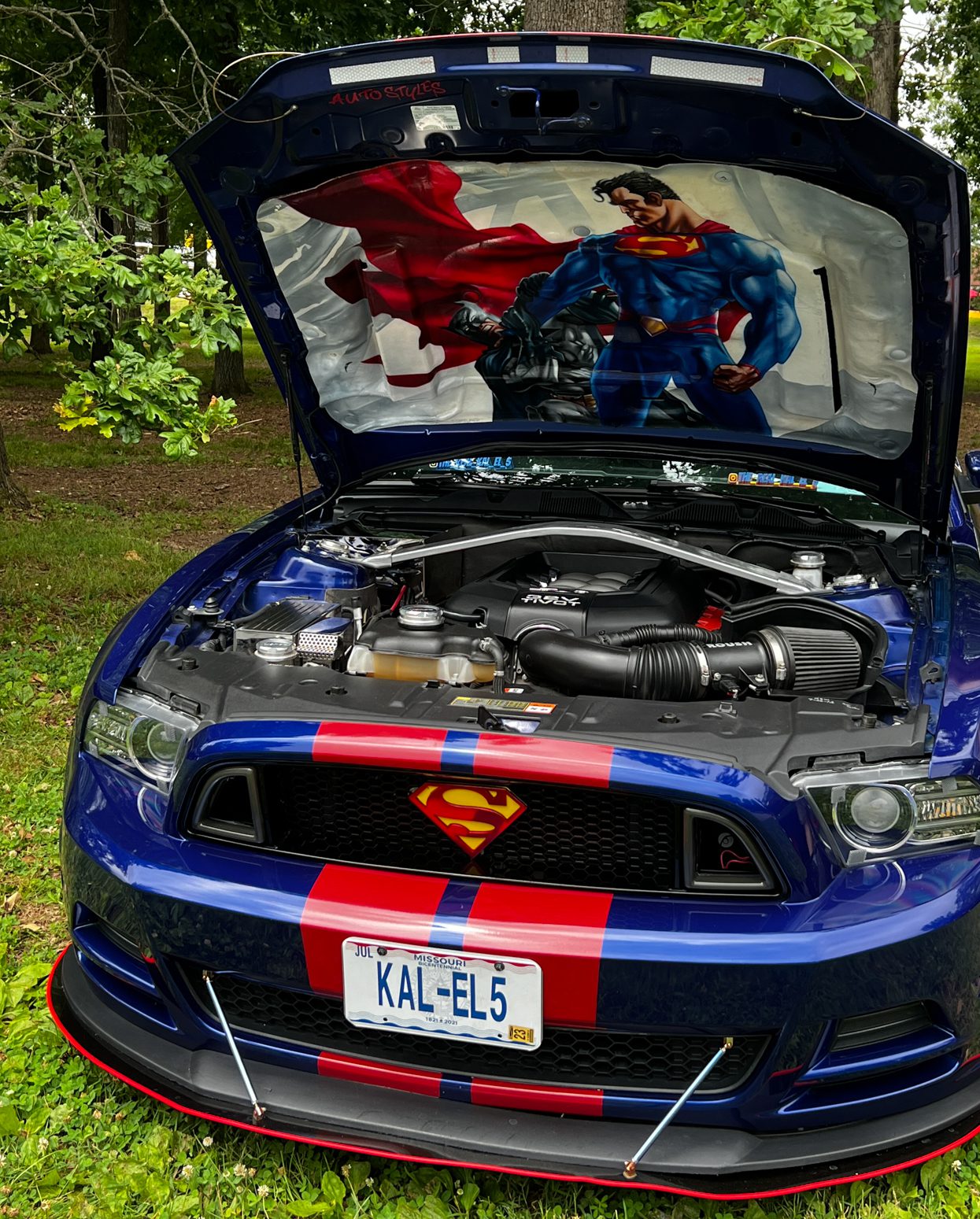 On the other hand, if I styled my Ridgeline this way, I’d never feel lonely on the road. I’d be traveling with three super men and I’d probably make a lot of new friends at each stop, too. Well, maybe I’d just do the seat cover on the front two… 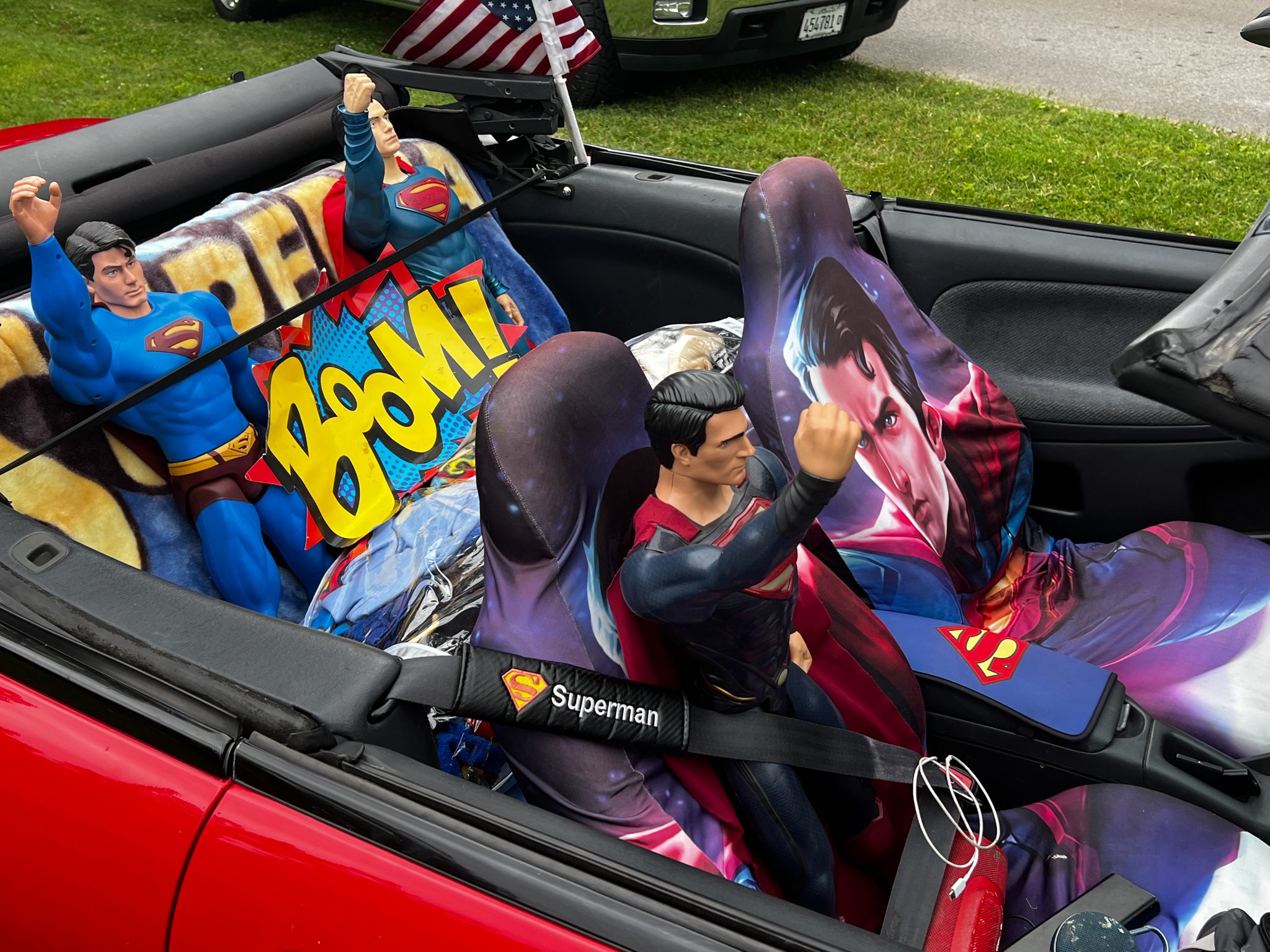 By the time I’d spent a half hour walking around checking out the cars, I felt way too hot and sweaty. Back at the trailer, I took a quick shower and then sat down to assess my options. By noon, the temperature was up over 90F and stepping outside felt like someone had thrown a steaming hot wool blanket over me. Ugh. Retreat to the Alto! The air conditioner was a champ all day long. One thing I learned staying in Gainesville during the pandemic summer of 2020 was that the AC dehumidifies as well as cools, so setting it at 80F in humid weather actually feels pretty comfortable. But, and it’s a big BUT here, I couldn’t see myself staying inside the Alto for the next five days just to survive the stupidly hot and humid weather coming my way.

And for those of you thinking “why didn’t she just go somewhere else?” the answer is there wasn’t really anywhere else to go. I was where that white circle was. I was surrounded. It was time to admit I was once again beaten by weather. 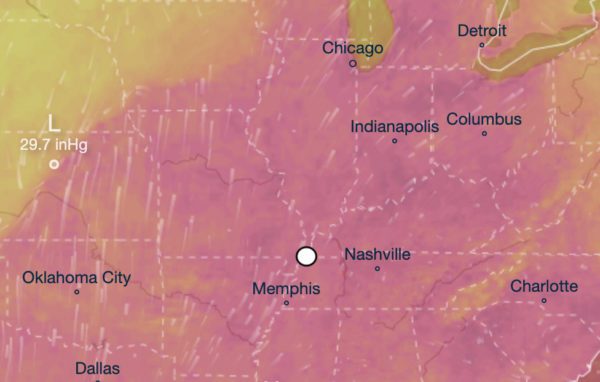 Making a Plan B

I had a free night at a hotel chain, thanks to a credit card affiliated with IHG hotels. I could buy more nights with points and cash, thanks to the same credit card. For those thinking about full-timing, having a hotel backup plan can be a very useful tool in your vagabond kit. This credit card is part of my hotel backup plan, and for the last year I was working full-time, I charged almost everything to it so that I could pile up the points that would someday translate to hotel rooms. I first had cause to use it in May 2017, when I broke my hand, and hopscotched from Indiana to Cape Cod via North Carolina (an Alto party I wasn’t going to miss) to Pennsylvania, staying at hotels for two weeks because I couldn’t do a lot with with one hand in a cast. You never know when you’ll need a hotel, so it’s nice to have a plan beforehand (see what I did there?) 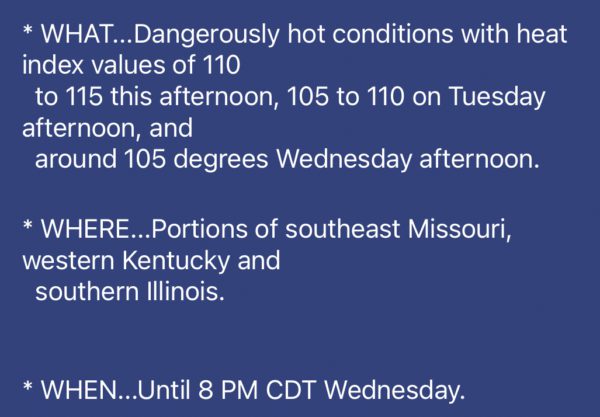 OK, back to Sunday and the stupidly hot weather forecast. I bet the weather would last more than just Monday through Wednesday, so I decided to move across the river to a hotel in Paducah on Monday and stay until Friday morning. One free night + three nights at a discounted rate thanks to my points, including a big parking lot for trucks and trailers right next to the hotel. Awesome. Got the reservations done and then spent the rest of the day inside, working on a paper for a client. It wasn’t too hot and I didn’t mind the small space Sunday because I wasn’t moving that much. But I knew to stay inside, in that small space for four more days would most likely drive me crazy.

By 9AM Monday morning, it was already 85F and by 11 it was over 90F. Ugh. I called the hotel and literally begged for an early check-in, explaining I was in a metal trailer across the river and I had to be out of my site by noon and had nowhere to go for three hours until the official 3PM check-in time. I can be really pathetic when I need to be, especially if being that pathetic gets me early check-in to an air-conditioned hotel room. Which it did. The hotel called back 15 minutes later to say they would have a room ready for me by noon. I hitched up in stages, retreating to the cool of the Alto every few minutes. The last thing I needed was to fall victim to heat exhaustion. I drove the 10 miles to the hotel, parked the trailer in the big dirt lot, turned off the fridge, cracked a window and turned the fan on low, and locked the door. For the next six nights, I was a hotel-based vagabond and I was fine with that.

How Hot Was It?

It was stupidly hot and humid that week:

Here’s a short video of that thunderstorm, from my third-floor hotel room.

So What *Is* a Heat Warning?

For those who don’t know what an excessive heat warning involves, it’s the most serious of the heat-related bulletins that the National Weather Service can issue. It says things like this:

National Weather Service actually publishes definitions of weather warnings in case you want to bone up on all of them. I’m thinking of playing weather warning bingo…

The heat returns? WTF, 2022?  Good thing I got lucky and had already planned this week to visit my oldest friend in the world (we met in 8th grade as the only two new kids in the class). I’ll be taking refuge in air-conditioned house (with its own generator if the power grid goes down!) and hoping that things cool off by the weekend. Please, weather gods? Pretty please? Because I don’t plan on writing a serial novel called Weatherbeaten.

What dreadful hot weather we have! It keeps one in a continual state of inelegance.