It’s been a hard week to be a woman in America. Enjoy the  pretty picture, then read on.

(You might have noted that this isn’t a Sunday Serenity post, because I’m definitely not serene after Friday.)

I’m well aware that most of my rights as a female person in American have been hard-fought battles and most have been won just within my own lifetime:

The Equal Rights Act was never ratified, so women still aren’t equal under the Constitution. Just what did the ERA say that was so freaking controversial that a majority of states would not ratify it?

Equality of rights under the law shall not be denied or abridged by the United States or by any State on account of sex.

Last Friday, six people in black robes sitting in a building in Washington, D.C., decided that their belief about the Constitution means that  I have no right to decide what happens to my own body. They are wrong. This text states the reality of the situation way better than I could. 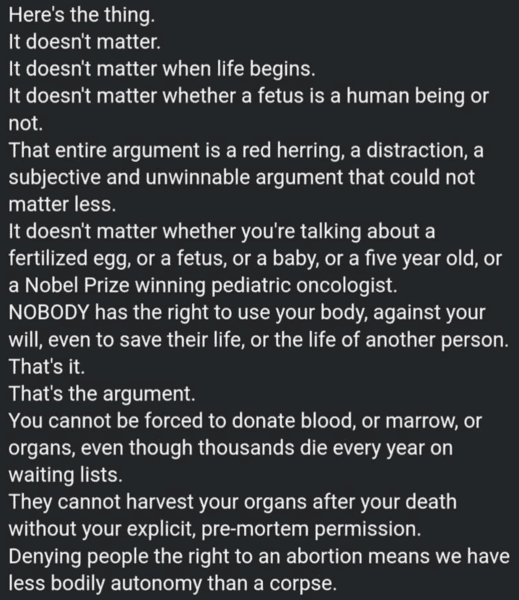 A man can’t be forced to donate a kidney (a life-altering decision for the donor) to a dying person but a woman can be forced to carry a pregnancy to term. That mass of cells at six weeks in Texas has more “right to life” than a person dying of kidney disease. Thing about that for a while.

And if you think the Dobbs v. Jackson Women’s Health Organization decision doesn’t affect you, think again. One member of the Court has already called for re-examining the right to contraception (Griswold v. Connecticut), the right to love whom you choose (Lawrence v. Texas), and the right to marry someone if they happen to be the same gender as you (Obergefell v. Hodges). That judge’s exact words in his concurring opinion to the Dobbs decision: “Because any substantive due process decision is ‘demonstrably erroneous,’ we have a duty to ‘correct the error’ established in those precedents.”

Think about that sentence. A Supreme Court Justices is itching to “correct the error” that expanded our liberty and equality, case by case by case.

I keep thinking of this quotation…

Who will you speak out for? And when?

I’m fine if you don’t believe what I do. You can believe whatever you want, as long as you don’t try to make your beliefs take away my human rights. If you choose to stop reading my blog because of this post, that will make me sad, but it won’t change my beliefs.