Never have I ever… been in Arkansas. Not in a trailer, not in a car. Not in a plane or a train. So I didn’t quite know what to expect. Turns out I was pleasantly surprised at every stop in my 16 days going from west to east across the northern part of the state (aka the Ozarks).

Two reasons why I was looking forward to Bentonville. OK, three. Seeing Emmylou Harris in concert, staying in a hotel for five nights, and <drum roll> meeting up with my friends and housemates from Gainesville, Florida. First off, the heat and humidity on Friday, along with the bug bites, was worth it to see one of my all-time favorite artists, Emmylou, at the FreshGrass festival. She sang a half-dozen of my favorite songs and I thoroughly enjoyed every minute of her performance. Another item crossed off my bucket list. 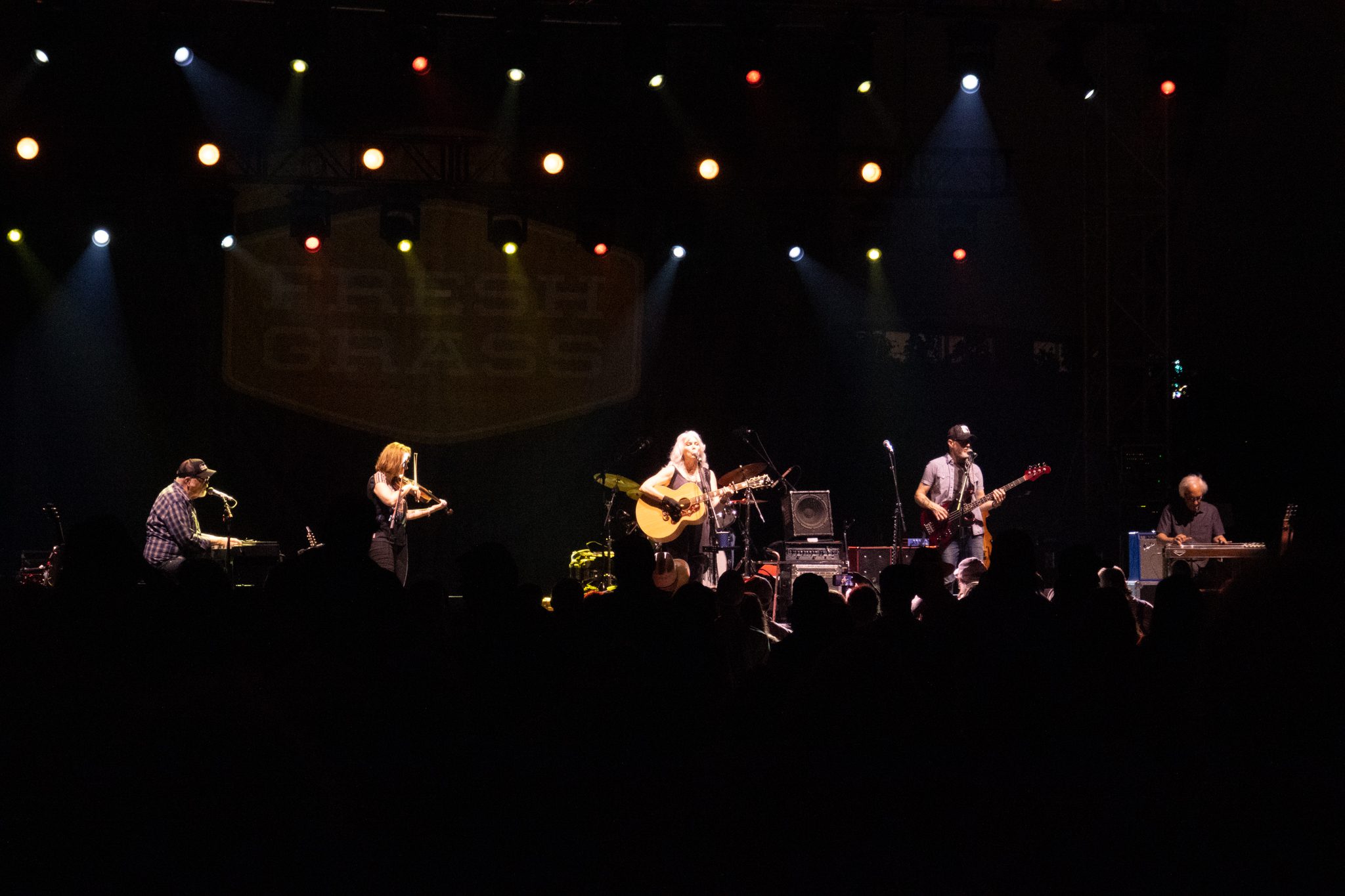 My friends and housemates are actually responsible for me having an Alto. I’d never heard of the brand until they told me they had one on order back several years ago. I still remember seeing the text message and photo on their pickup day and thinking, damn, that’s a nice looking trailer.  So I did love seeing the two Altos parked side by side in the hotel’s back lot. The last time they were together was January of 2021, so I imagine that at night maybe they were exchanging updates like long-lost friends after being apart for so long. 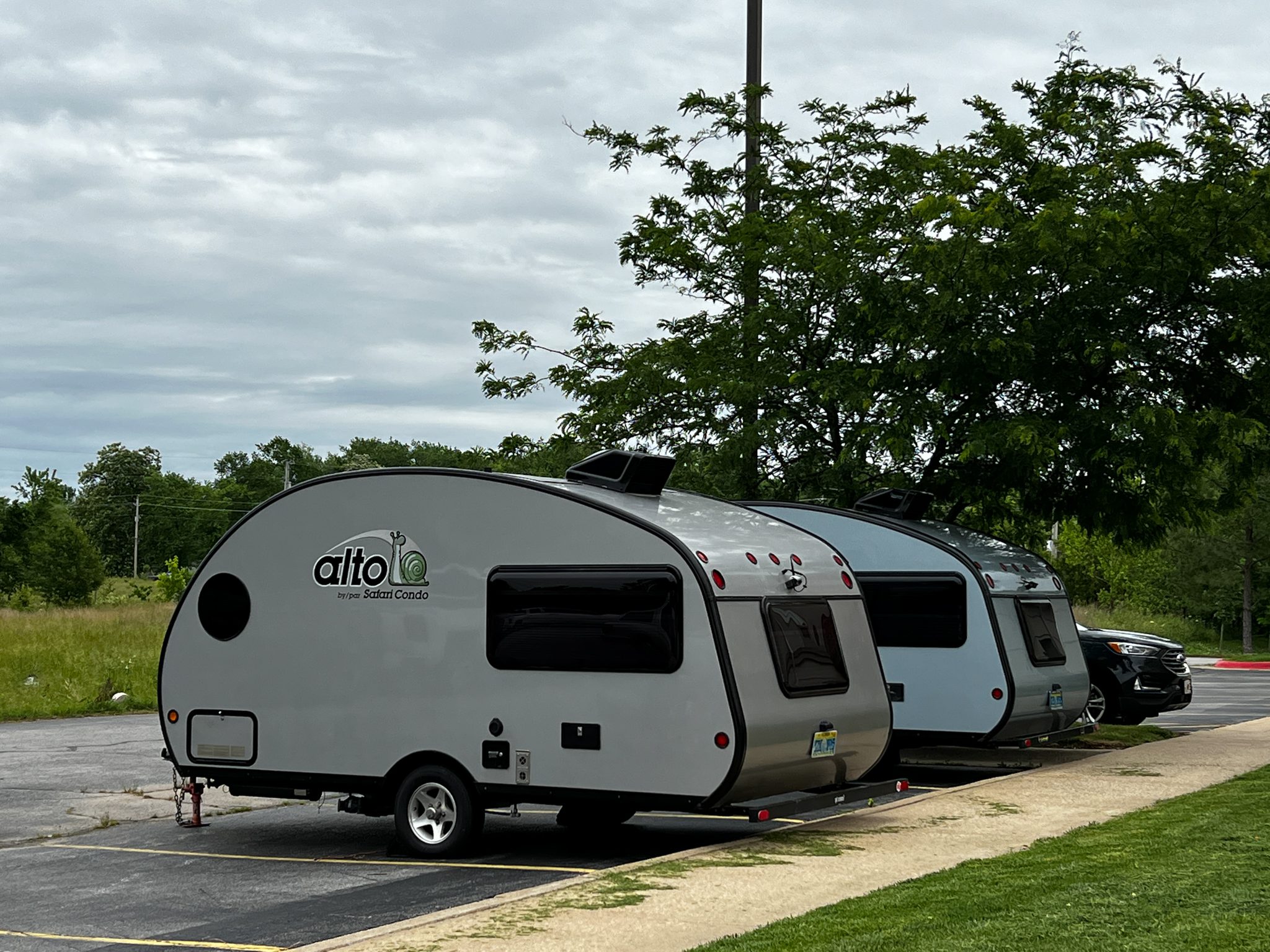 Traveling with my friends was their new wire fox terrier, a five month old puppy named Rory. He is absolutely adorable, full of puppy energy, and desperately wants to be friends with everyone who comes near. The photo below documents the first time Rory and I went for a walk (actually a hike) all on our own. He did pretty good although, to his credit, he was on the leash the whole time.

After five nights in a hotel, it was time to get back to actually camping in those Altos. We each hitched up and traversed the 20 miles or so to Beaver Lake for Memorial Day weekend. The sites were pretty great and I sat outside under the gentle breeze all one afternoon thinking this is what camping should be like every day.

I also caught my first tick of 2022, trying to latch on to my skin. Ugh. Tick season is the worst.

While the sites were nice, the facilities, well, not so much. The vault toilets had zero lights working when we arrived, so we used headlamps on our visits. The showers were stone cold, you could have chilled beer in that water. The third day, we finally got a ranger driving around, who summoned the maintenance crew. The women’s toilets soon had lights, but the men’s side never did. And the water never got warm, either. Sigh. It was an easy decision to move over to Eureka Springs a few days short of our planned stay.

This campground was at a city park bordering a small lake. After the holiday Monday was over, it was pretty deserted as far as fellow campers. Staying here meant the lovely town of Eureka Springs was only a 5-10 minute drive away: food, fun, restaurants and whatever else in minutes! Great thrift shop, good diner-style breakfast at the Best Western, two well-stocked liquor stores, and downtown streets chockablock with shops offering amazingly creative art. 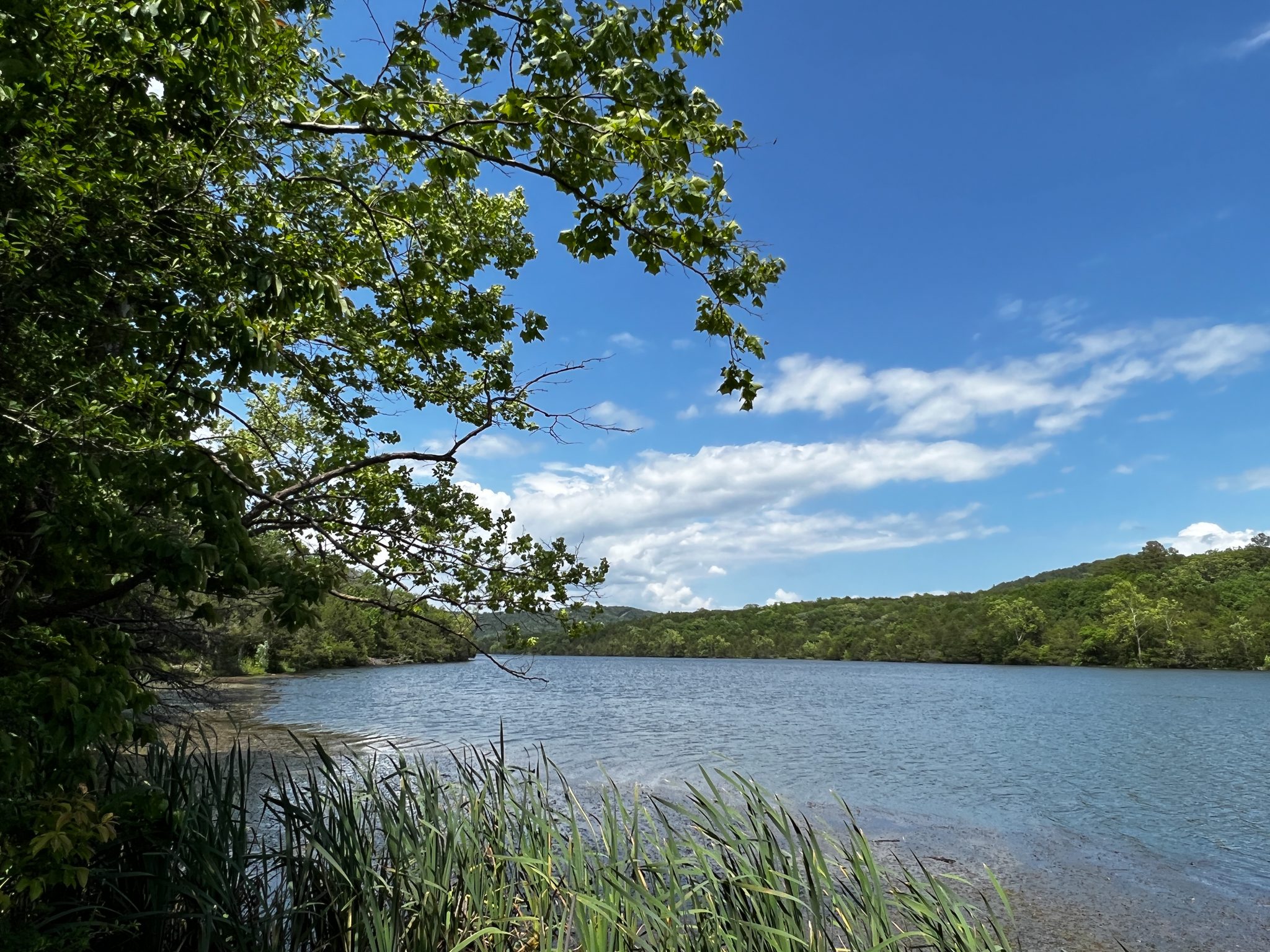 My friend and I spent a very relaxed afternoon hanging out in Eureka Springs, checking out all the stores. Oh, the artwork on display! I bought a tiny box to hold my daily jewelry, but if I had a home, I probably would have been tempted to buy a lot more shiny things. One store had this bunny who has been trained to give customers a receipt, then a pen, to sign for purchases. So OF COURSE I had to buy something. And we both got to pet the bunny. Such soft fur! 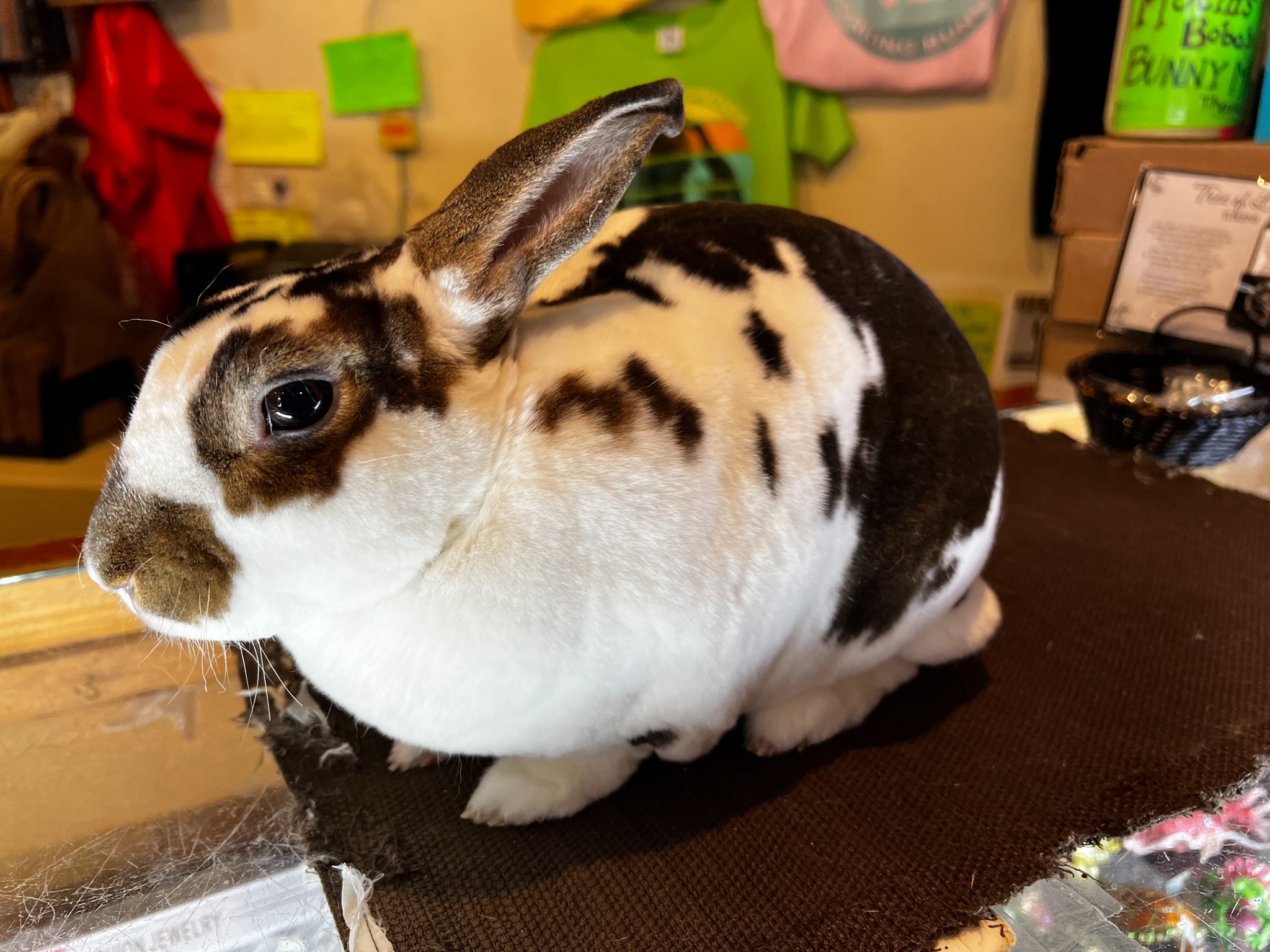 In one of life’s little serendipitous moments, my housemate and I were having a discussion at the diner about whether to order the biscuits. I suggested she ask the woman behind her if they were good, since she had a plate of them. Turns out that woman was her sister-in-law, from Austin, TX, just passing through town for a few days with husband across the street at a motel.  What were the odds that a brother from Texas and a sister from Florida would meet up in a diner in a small town in Arkansas?!

Back at the campground, there was lots of good hiking and many of these zebra butterfiles, obviously deep into mating season. 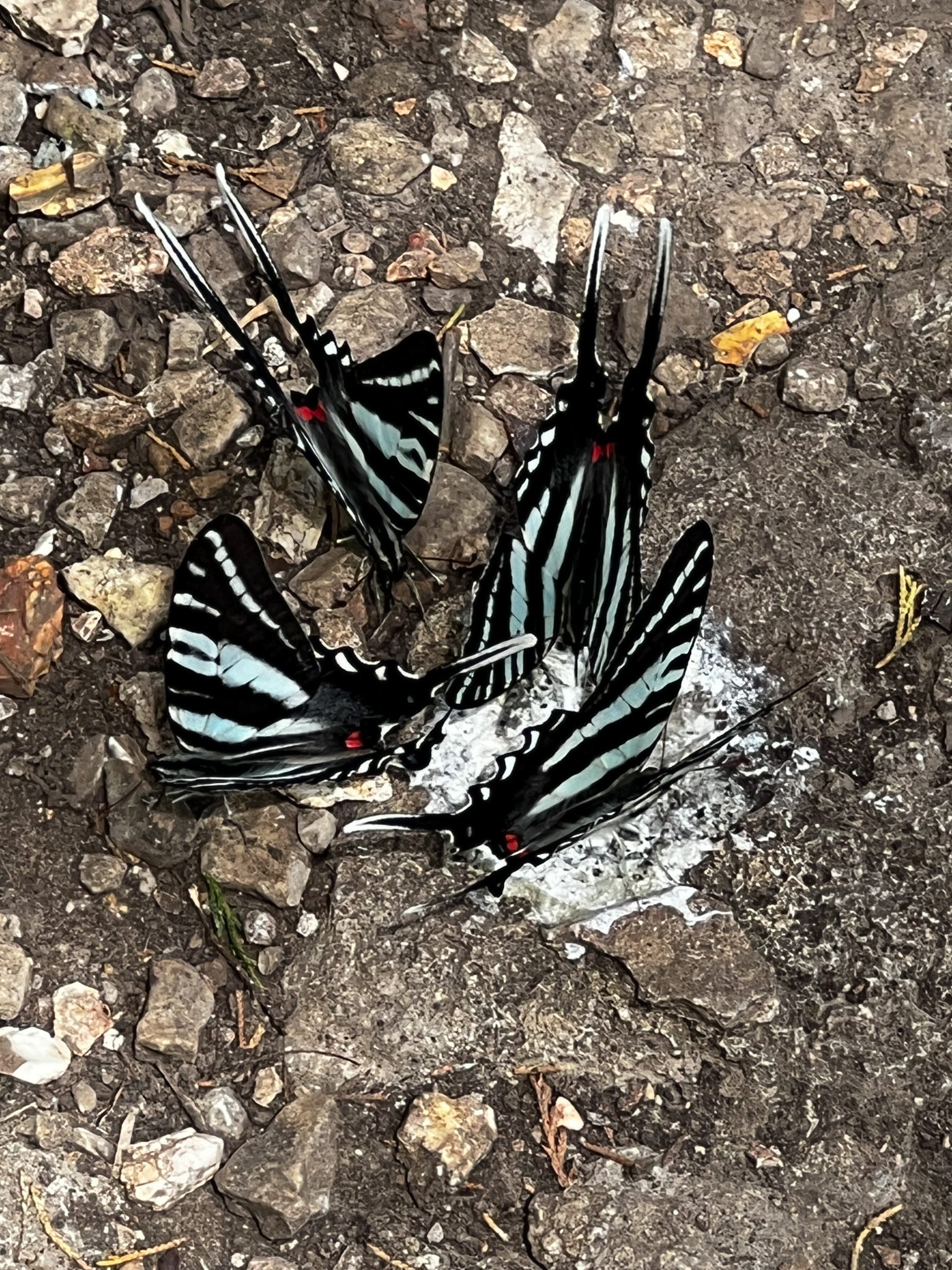 The campground was two minutes drive from Thornecrown Chapel, which was designed by E. Fay Jones, once an apprentice to Frank Lloyd Wright. I admired the design and the beautifully wooded surroundings, but the structure didn’t really move me all that much, to be honest. Maybe it was the really sappy instrumental music playing inside or maybe it was too much metal and not enough wood. 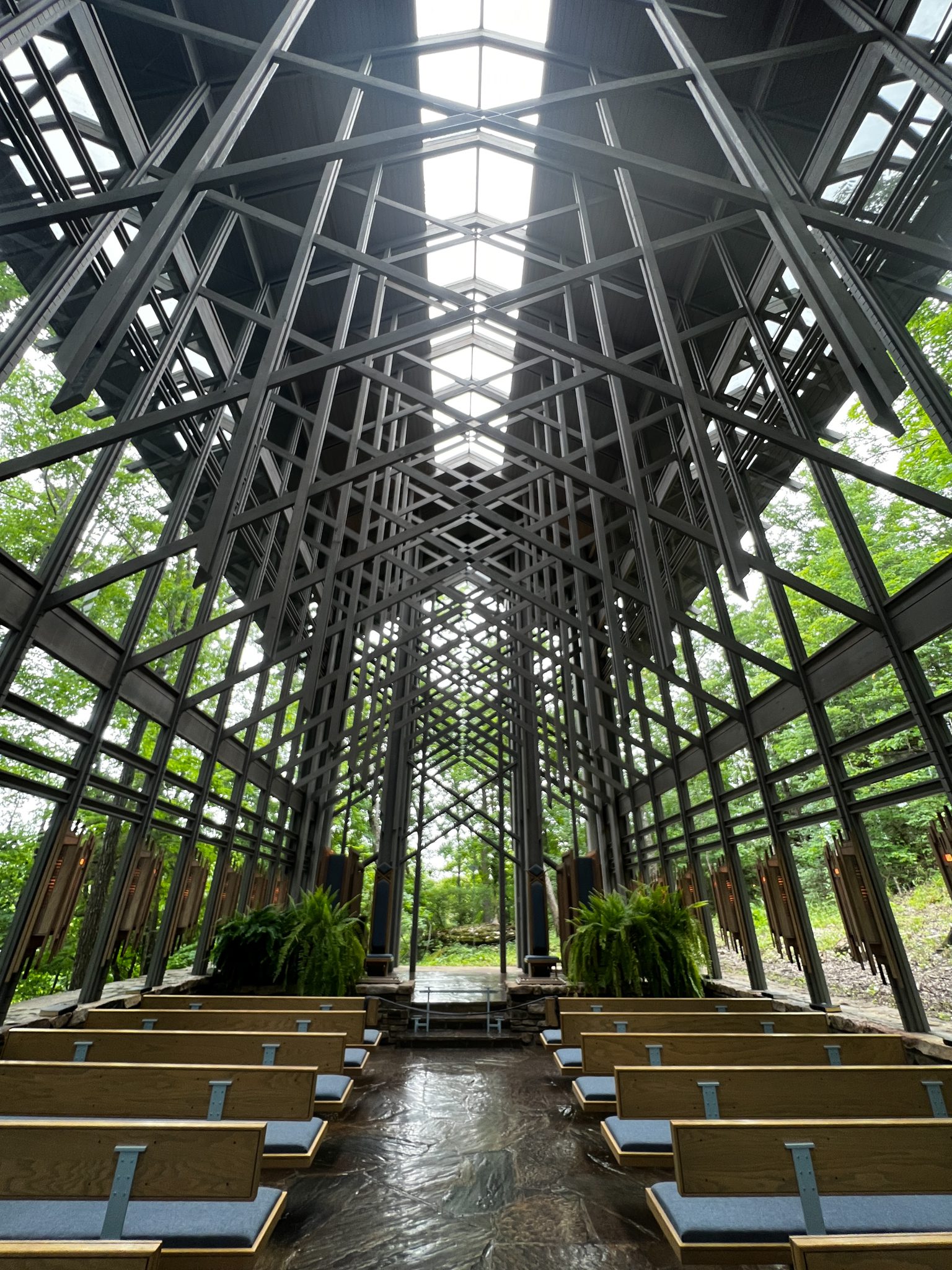 I actually liked the vibe in Eureka Springs so much that I’d consider hanging out there again. I probably couldn’t afford to live there, and not sure the Ozarks, with that summer humidity, would be suitable for me either. But it’s one of the few places to catch my fancy enough to imagine living in one of those restored old house (which I can’t afford!).

My last stop in Arkansas was another USACE campground on Lake Norfork, just north of Mountain Home. When I checked in, the camp host had two questions I don’t think I’ve ever been asked before upon arrival: Could I back up my trailer fifty yards or so? Did I like waterfront sites? This did not bode well for my “not a waterfront site” reservation. Turns out the bottom have of that campground loop was flooded, so if I wanted to get into my site, I’d have to improvise. And since it was a Friday night, there weren’t any other available sites I could have changed to, so it was this site or the Walmart parking lot back in Mountain Home.

The camp host suggested  looping around the bath house to face the way I had come in, then back straight down the road 50 yards or so to my campsite. I could have actually done this, if only someone had not parked their big pickup and boat trailer on the bath house loop. I tried valiantly to back in using half the empty site just across and down the road from my site, but it was a very sharp angle and I couldn’t quite see where the trailer was going. And did I mention there were concrete culverts on either side of the campsite entrance? Who does that??!? 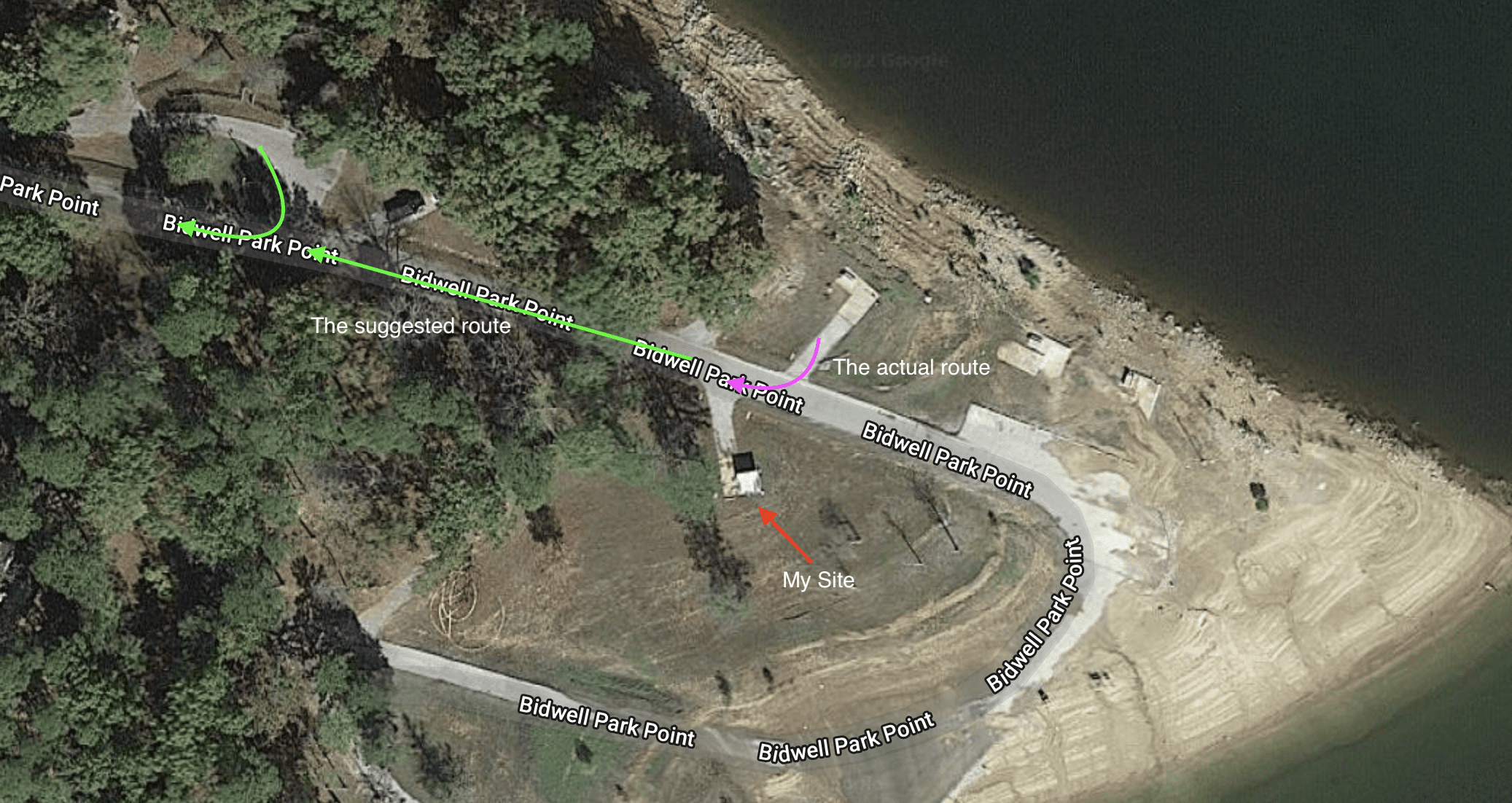 To try and make sense of that last paragraph, here’s a graphic. Everything below the red arrow including the road and beach area was underwater. (If it wasn’t flooded, I could have taken Bidwell Park Point road counterclockwise and then easily backed into my site.) The green loop and line was the routing the camp host suggested. The boat blocker was right at the curve of the bent green arrow and I didn’t have enough room to get by. So my only play was to use the empty site marked by a pink arrow: pull headfirst into that spot and then try to back into my site. It seemed much more doable in real life then than looking at it on the graphic now.

I was rescued, gratefully, by the couple across the road and one site up, who offered to spot me backing the site. For once, I took an offer of backing-up help with great relief. Within five minutes, we had the Alto nicely tucked in and I had made two new friends.

The next afternoon, I had a great time hanging out at their rig, with friends of theirs visiting from town (they all live in Mountain Home, about 7 miles away). Crackling fire, refreshing beverages (in every sense of the word), some delicious chicken and rice for dinner, and most enjoyable of all, great conversation about camping, working, retiring, and trailers. I hadn’t realized that Arkansas is “The South,” but it definitely is, from sweet tea to “y’all” and “yes, ma’am” to the art of conversing with someone even, especially if that someone is the checkout cleark when you’re just buying groceries at Walmart.

The other thing I loved about this spot was my Sunday morning paddle. I got out on the water while it wasn’t too hot and before all the pontoon boat owners came back from church and loaded up. I had my own church on the water, drifting along, face tilted up to the sun, playing leapfrog with a couple of blue herons who didn’t appreciate me paddling along their shoreline.

Before I finish this post, I have a question for you. Have you ever hear a whippor-will?

There was one who loved to sing just above my trailer every morning about 5:07AM. So one morning, I was ready with my phone video. There’s nothing to see, but you can definitely hear the distinctive call of the whipporwill. It’s one of the few calls even I (a very incompetent birder) can recognize. (Enjoy, Jeanne and Anna!)

Perhaps the first rule of everything we endeavor to do is to pay attention.