48 days and 1300 towing miles, from late November to the first week of January. I went from the Salton Sea to Santa Cruz, back down to the Inland Empire, and ended up in two new desert spots in the the southeastern part of the state. What did I get for all that traveling? A lot of photos, actually, so I’ve got two blog posts to cover it all. Here’s part 1…

Say what you like about the smell of rotting fish certain times of the year, but the colors here can be gorgeous for photographers. And its usually very quiet as far as campers go. Even the week including Thanksgiving there were many sites to be had (albeit non-electric ones). I made a late reservation here snagging one of the last of the electric sites for four nights. No smells, yay. Also no boat launch. Boo. I remembered paddling here in 2017 so I asked the ranger on duty. Ah, he said, it closed in early 2018 because the sea has evaporated so much that they would have had to dig a new, very long and very expensive channel for paddlers. 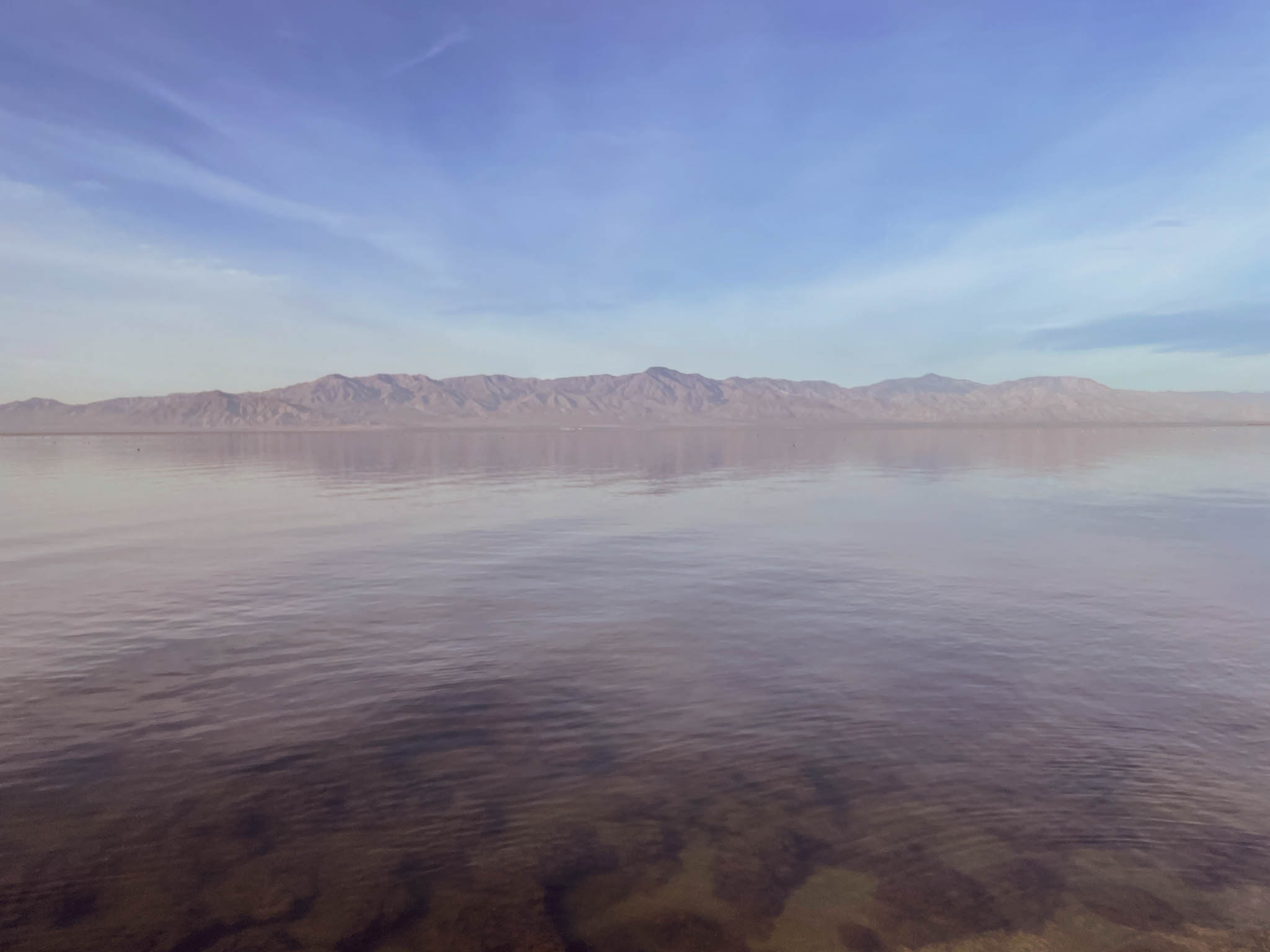 The evaporation has also made the water much more salty, which may explain why I saw zero pelicans and only a few species of birds this time around. Last trip, I was inundated with birds. This change made me sad. Back in 2017, I saw both brown and American (white) pelicans as well as a ton of herons and egrets.

I headed north out of Salton Sea, aiming for my nephew’s place to spend Thanksgiving with him and his wife, driveway surfing in the cold but sunny weather of Victorville. Surprisingly, it wasn’t that windy this time around. There were few, if any, tumbleweeds blowing down the streets, and my trailer and I appreciated that. It’s tough to avoid a tumbling tumbleweed when you’re towing.

On Thanksgiving Day, we had a great feast of food and then washed the Alto. While this was a weird Turkey Day activity, it was my nephew’s only day off since he works in retail. And he was willing to get up on his tall ladder on the slanted driveway and wash the roof, so I wasn’t going to stop him! This was the first real bath that Breeze has gotten since my housemate and friend Mike gave the trailer a light power-washing the beginning of January. I was so pleased by the shininess of the roof that I took a picture of it 🙂 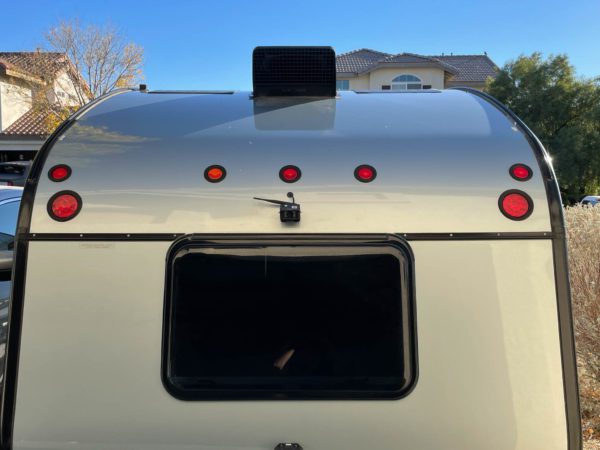 After doing some errands and cleaning of the Alto interior, I hitched up on Saturday and started my journey towards Santa Cruz. Several hundred miles, so I did it in three stops, two of them beach campgrounds. The first stop was simply to get halfway across LA. Bonelli Bluffs is a decent place to stop for a night or two: full hookups, close to the 210 and the 57, and with gas stations and stores nearby.

Oh, I have missed the California coast. One of the best things about California is that most of the coastline is publicly accessible, a feature that has been protected avidly, by the California Coastal Commission and individual citizens since 1972 (thanks, Proposition 20!). From the Mexican border in the south to the Oregon state line in the north, there are literally thousands of places where you can access the coast. There’s even a web app for that (and an iOS app).

Yes, I am pretty proud of of my native state for protecting the coastline so that everyone can enjoy it and not just people rich enough to own beachfront homes. When I moved to Washington State, I was shocked at how much of that coastline is privately held and completely inaccessible to the public. Well done, California.

Along with a lot of public land and public access is a lot of coastal campgrounds. Heading north, I stayed at El Capitan campground, just north of Goleta and Santa Barbara. The approach is tight so I would have hesitated if I’d had a big rig. Two of the three loops close on December 1st, so I had someone waiting to take my spot overlooking the ocean when I was hitching up to go. The approach and the short runway to back into my campsite was worth it, though, for a late afternoon stroll on the beach.

I also enjoyed a great sunset that evening. I didn’t realize that was the sun’s swan song for the next few weeks. Sigh. 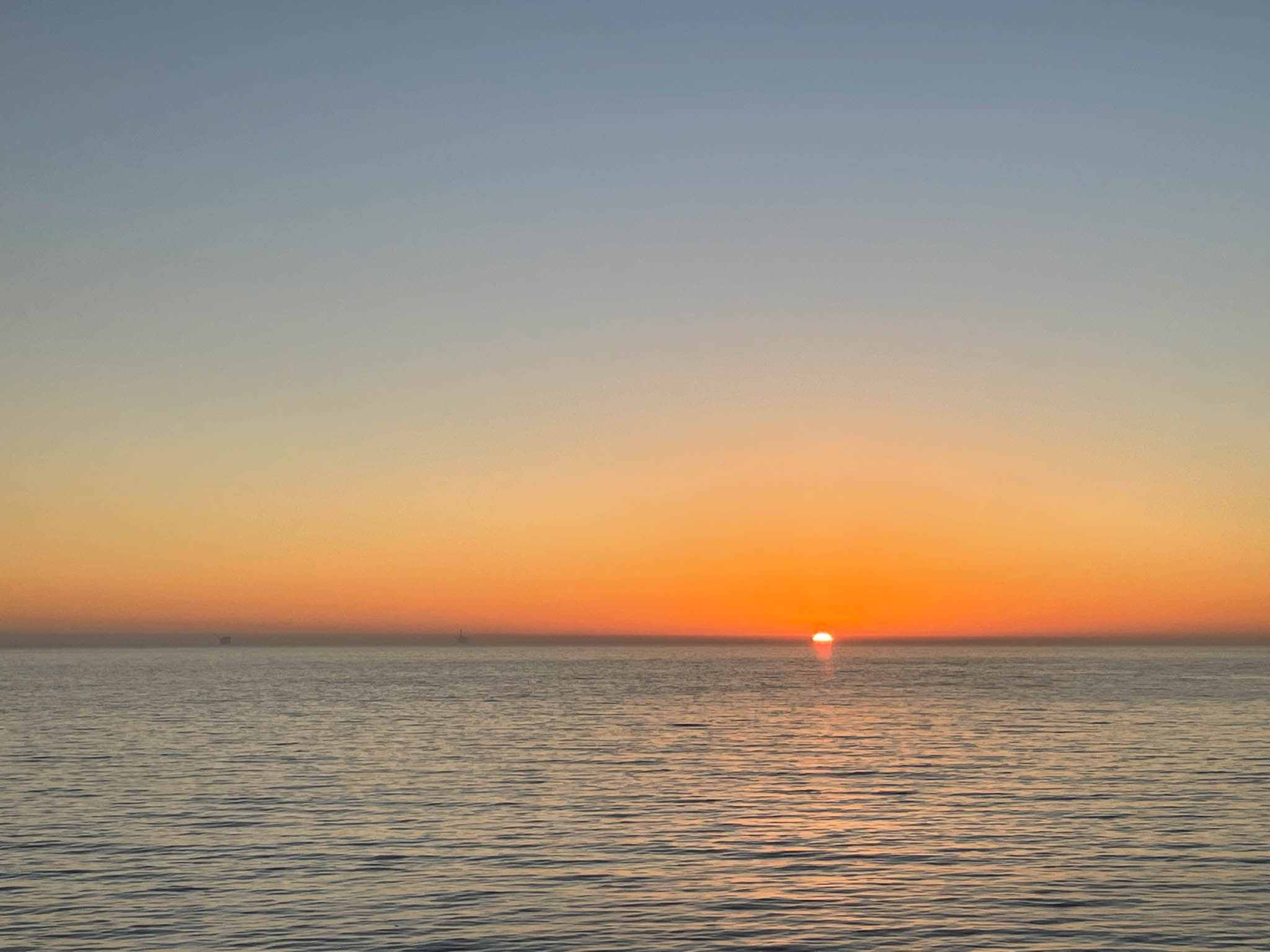 The next morning, I woke to this view of the very same beach. Fog the next morning, and the next and the next. You get the idea. Despite moving around, the fog and overcast, if not downright rainy skies, were determined to follow my travels more closely than my most avid reader. 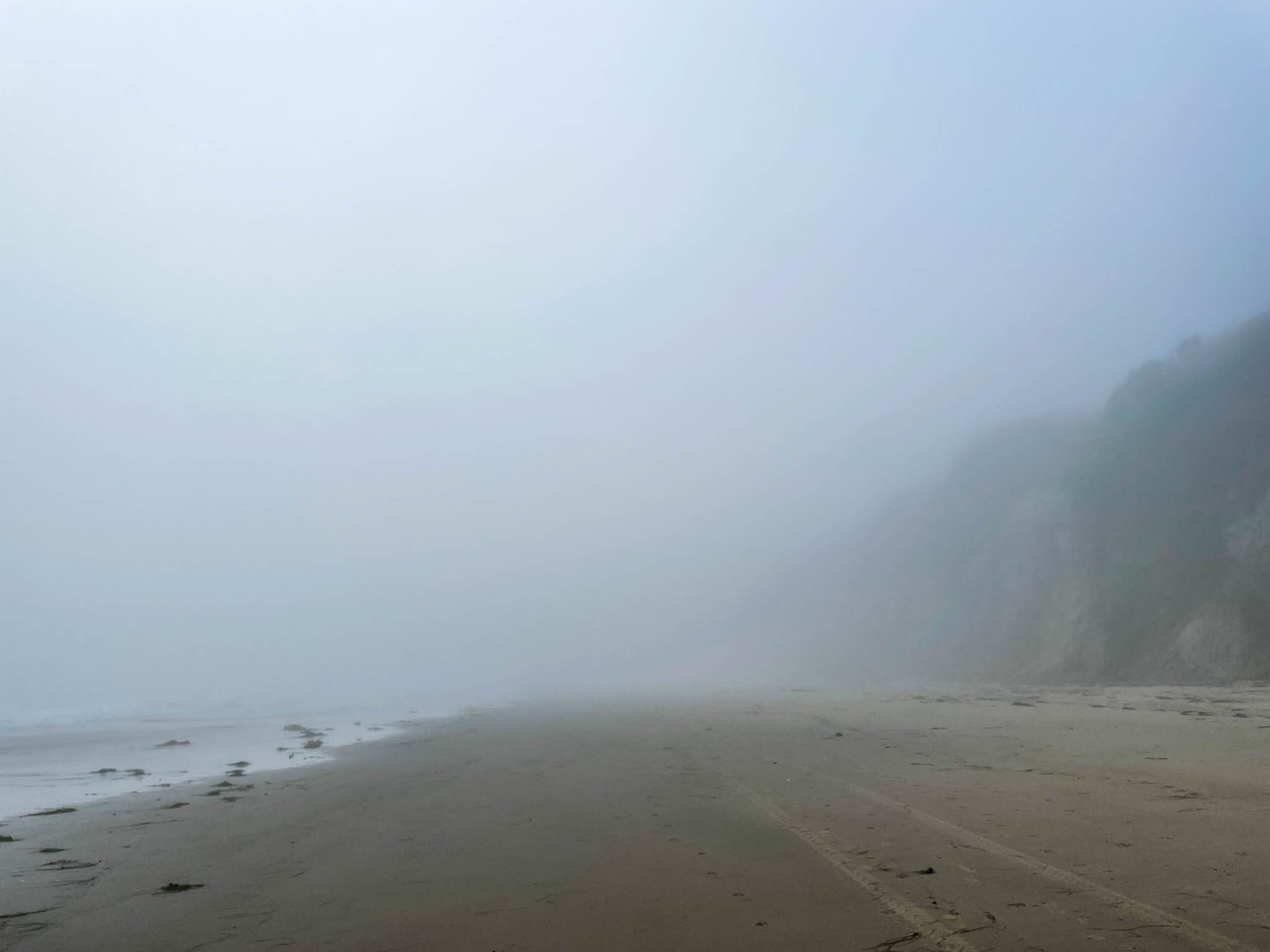 Although all that stormy weather did bring some much-needed precipitation to the Golden State, my solar setup didn’t like it all that much and I was watching my battery monitor more closely than usual when dry camping.

Tiny Videos: Afternoon Walk and Foggy Morning and Plovers on the Beach (slightly out of focus, sorry!)

Ah, Pismo, long sandy beach, cool bakery nearby, and wintering grounds for a ton of monarch butterflies. When I was here the in December 2019, the monarchs were few and the trees where they would normally be clustered seemed so bare. The whole place was sad and people were worried. What a difference two years can make. There were so, so many monarchs, flying around, clustered in clumps up in the trees, and, every so often, alighting on a fence post or a person (!) for a brief rest. The mood in the monarch grove was festive, with people sharing binoculars and happy exclamations of pure pleasure at seeing so many monarchs. Hanging out there, even masked and socially distanced, felt like the before times, people sharing and laughing and enjoying the scene, without politics or debates intruding on the scene. It made me happy and gave me hope that someday we’ll have more of those moments when we come together and celebrate something as amazing as monarch butterflies hanging from trees.

Also, I was having so much fun that I forgot to take any pictures!

I lived in the Santa Cruz area for 12 years (2000-2012) so it still feels somewhat like home when I get there. I know the stores, the streets, and all that stuff, so I don’t have to constantly consult Google Maps or the Garmin. Bet you didn’t realize that those two map tools are my constant companions most of the time. Almost every place I go is new to me, and I need to find where the grocery store, gas, post office, and other stuff is. So spending a few weeks in Santa Cruz just *knowing* where things are is totally relaxing (even if the Highway 1 traffic is not).

First things first. When showing up in Santa Cruz, get to the beach. Spending an hour or so with friends and their dogs was the best re-introduction to one of my favorite Aptos beaches and the perfect late afternoon activity. 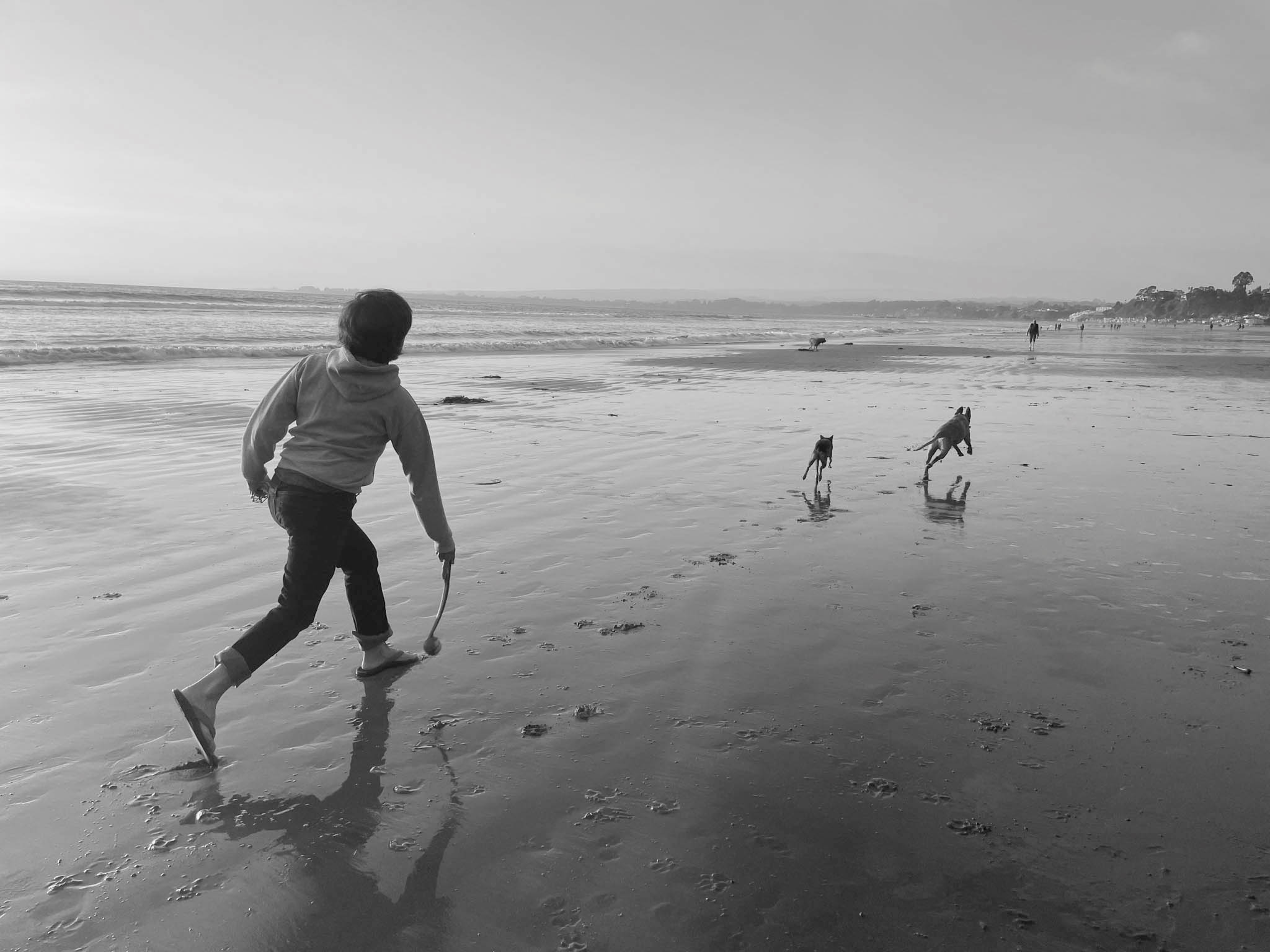 This trip, I divided my time between Sunset State Beach, New Brighton State Beach (most of the time), Seacliff State Beach, and the KOA. What? Why a KOA when I have all those beach options? Because, in a word, weather. Another massive storm was predicted and the park closed all three beach campgrounds for Saturday and Sunday one weekend. Fun. The KOA has availability, despite a steep price, and it was kind of the only game in town, so I got to enjoy a kid-filled Saturday night with Santa and a big party going on across the way. I was more than happy when the state parks opened back up on Monday.

The second weekend had a special treat: my friends and fellow Alto owners Alissa and Richard came down to Seacliff for two nights so we could meet up for the first time since New Year’s Day 2020. Wow, a lot has happened in those last two years. Including their original Alto getting hit in stopped freeway traffic and totaled. So this time I got to meet Dory2 and Bruce2 (yeah, the original tow vehicle can no longer tow). Marianne’s ice cream and really beautiful sunsets were enjoyed by all.

One of the vexing things about jumping between campgrounds is that you have to be out of one by noon and you cannot check into the next one until 2PM. So the upper level (“day”) parking at Seacliff is a Woodstock of RVs, vans, and trailers from noon to 2PM every day. Luckily, it’s just a two-minute walk from Marianne’s ice cream, to ease the pain of waiting. And one time, my friend Yifun showed up with piles of dim sum so that was also great (thanks again, Yifun!).

After two weeks and change, seeing a lot of friends, hanging out at the (often cold and rainy) beach, and eating *so* much good food, it was time to head back south. California is great to visit, but between the high-priced campsites (yes, even at state parks!) and the cost of gas, my bank balance was telling me to head south and find warmer and cheaper digs for the winter. But first, I’d have to get out of California, which meant I still had a lot of driving (and camping) to do.

I need a name for this ink … A name for the feeling you get when you see someone again. After many years. Someone lost to you. Or so you thought. And you remember them a certain way. In your mind, they never age. But then suddenly, there they are. Older. Changed by time. Different, but exactly the same.