Coming out of the tunnel into Zion literally made me cry with happiness. I was completely overwhelmed by the canyons, towers, and temples of this place. This was Utah’s first National Park and it is, without any doubt, it is the most breathtakingly beautiful one. 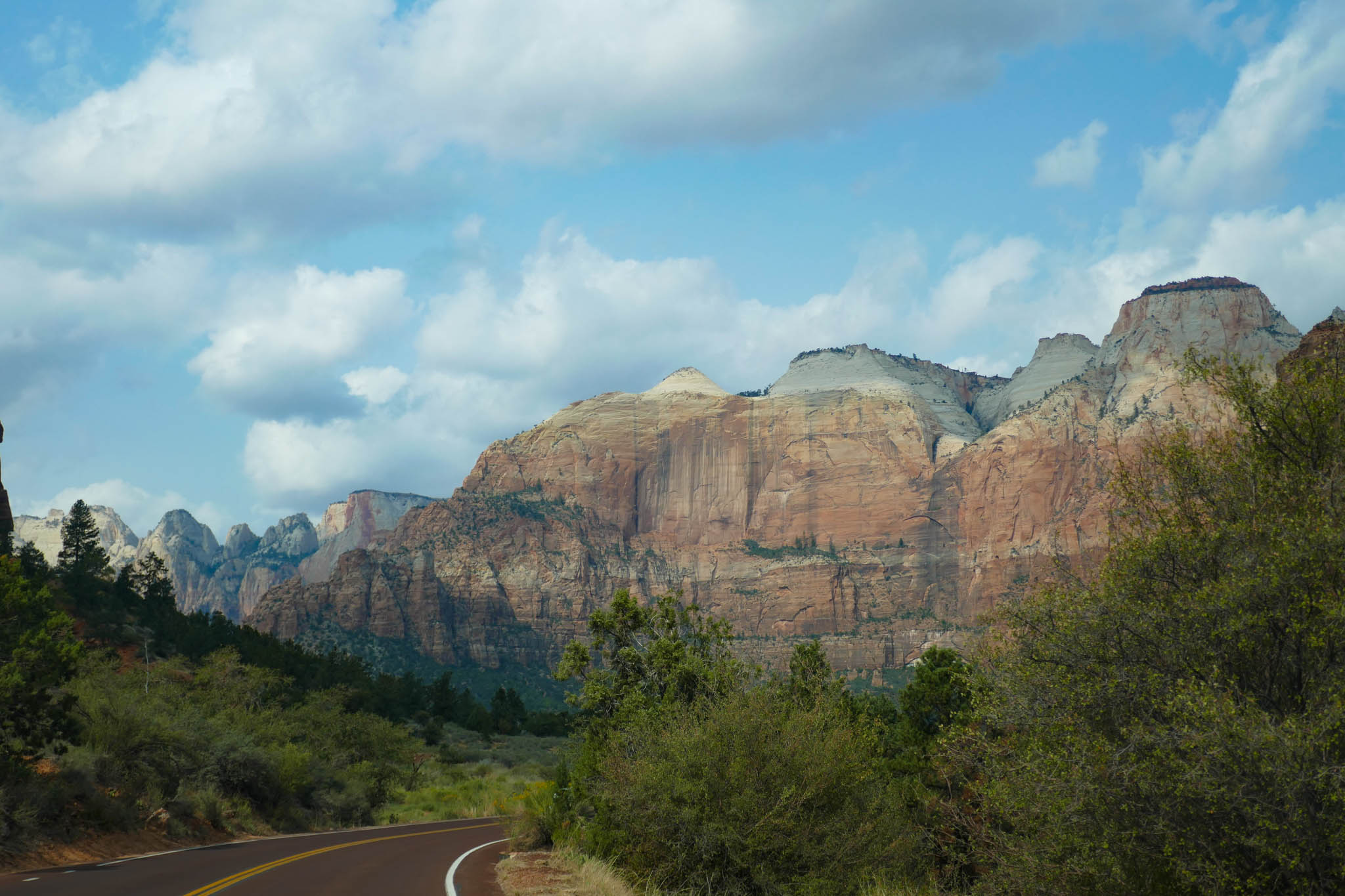 Just look at this view. It’s like a painting, all soft colors and hard edges as far as the eye (and camera) can see. If you’re reading this on an iphone or small tablet, please don’t. Go sit at a bigger screen to really appreciate the beauty that is Zion National Park. I’ll wait…

A few days later, coming in through the southern entrance at Springdale, I was just as overcome. I wanted to pull over and just stare up at the rock formations that surrounded me. Everyone was walking down the street like it was no big deal. I wanted to yell, it’s a HUGE DEAL, people, look up!!! But maybe they were just used to it, or they’d already had their own moment of WTF and were just getting on with their lives, buying souvenirs and coffee and renting out sticks and shoes for the river walk. Me, I couldn’t stop looking up wherever I was at Zion. 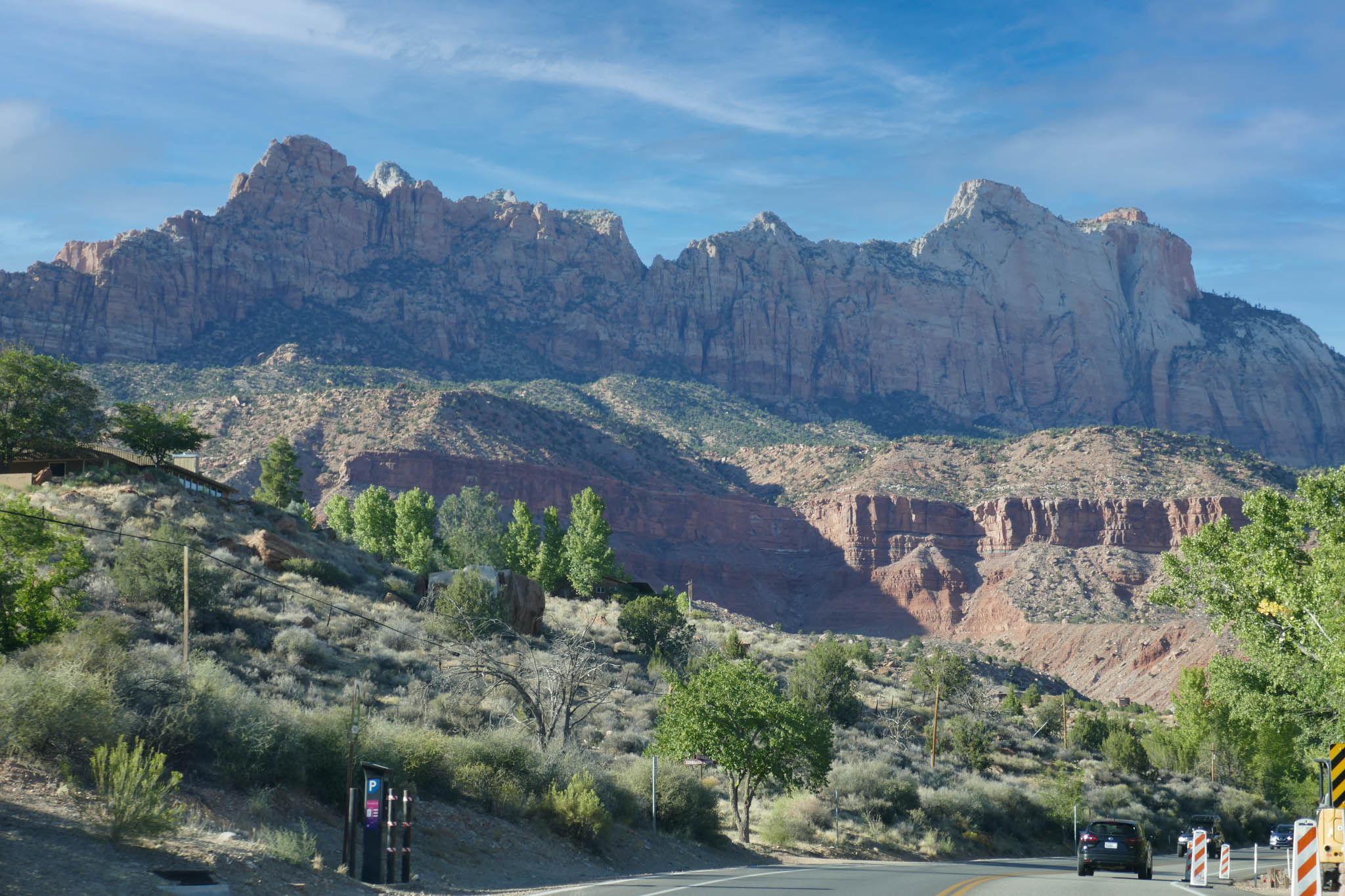 When I got to my campsite, this was the view behind me. Literally, the view behind me (see the cover photo for this post). Even though it was hot enough that I ran the A/C to cool the trailer down in the afternoons, I would pull out my camp chair and sit outside for a while, just staring up at Watchman and letting the play of the afternoon light entertain me. 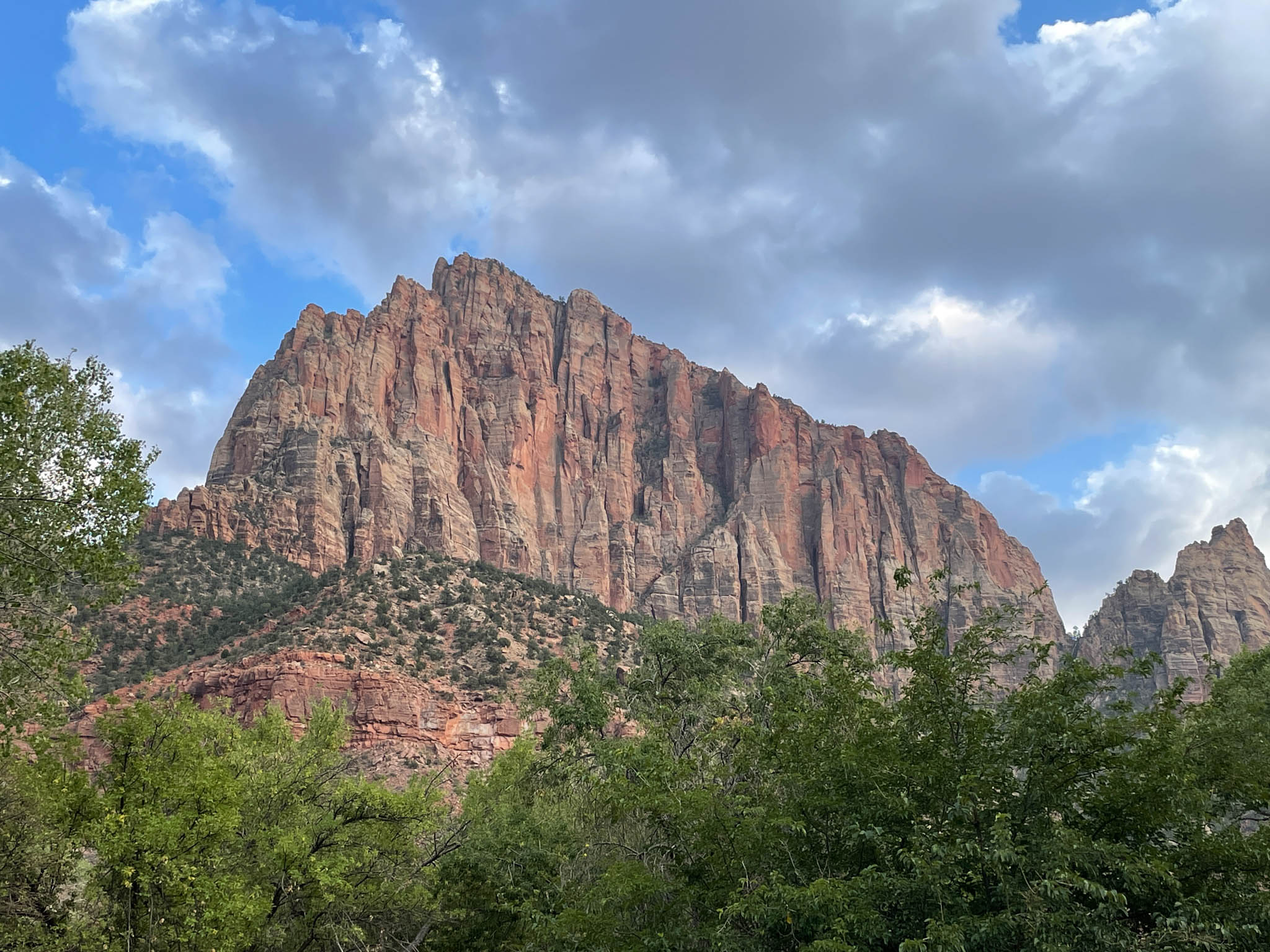 I did walk into Springdale one afternoon for postcards and saw a view I was pretty sure I could replicate. I walked down the Virgin River bordering the Watchman campground until I found it. Yeah, it was worth the effort. 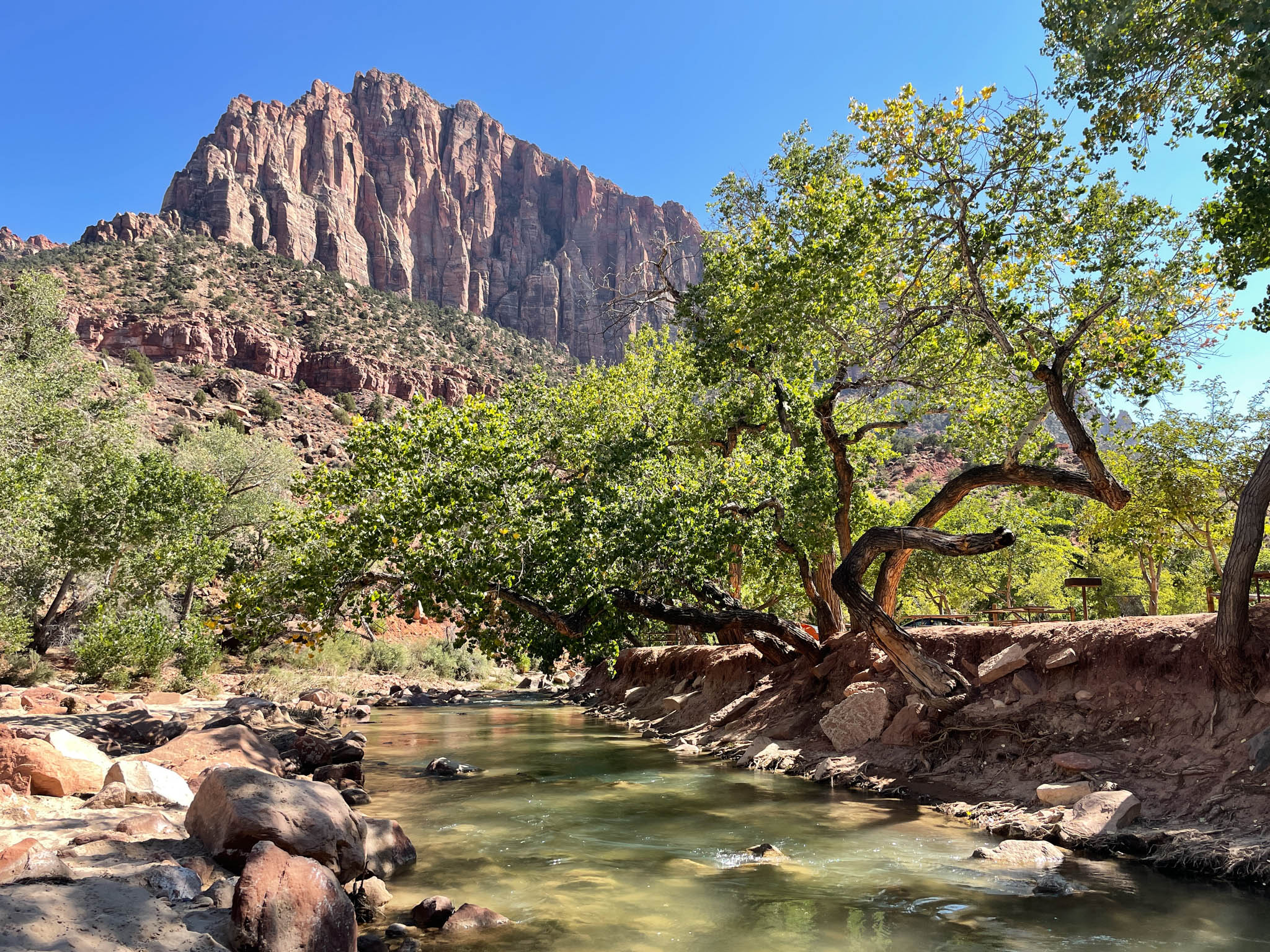 One of the huge disappointments at Zion was that the shuttle busses that take you north along Zion Canyon to Sinawava only ran out of the Visitor Center from 8AM to 5PM. That ruled out any chance of a sunrise or sunset view deeper into Zion’s canyon. I could see by the golden light on the mountains around me that sunrise and sunset would have probably been pretty spectacular in specific places, but without the ability to drive a car up that road, those views stayed a mystery to me. I kind of envied people staying at the Lodge, because they were halfway up the canyon with access to more of Zion in the shuttle’s off-hours. I might consider a night or two at the Lodge just for the opportunity to have more early morning and evening access to that part of Zion. Or visit between late October and early April, when private vehicles can traverse the road north of Canyon Junction.

Nevertheless, the shuttle is a good deal. It runs to all the trailheads and, at least near the end of September, the longest I waited at the Visitor Center was 7 minutes. (Yeah, I heard it was hours of waiting in the summer, with reservations required, but the crowds thinned enough by the time I arrived that neither one of those things happened while I was there.) I took the shuttle mid-morning (after the river walk people have most departed for Sinawava) to The Grotto stop and hiked to the Emerald Pools. The pools themselves were kind of disappointing since they were almost dry, but the views from the trail did not disappoint. This is looking south from the Kayenta Trail down the Virgin River. Yet another Zion view I could have stared at all day. 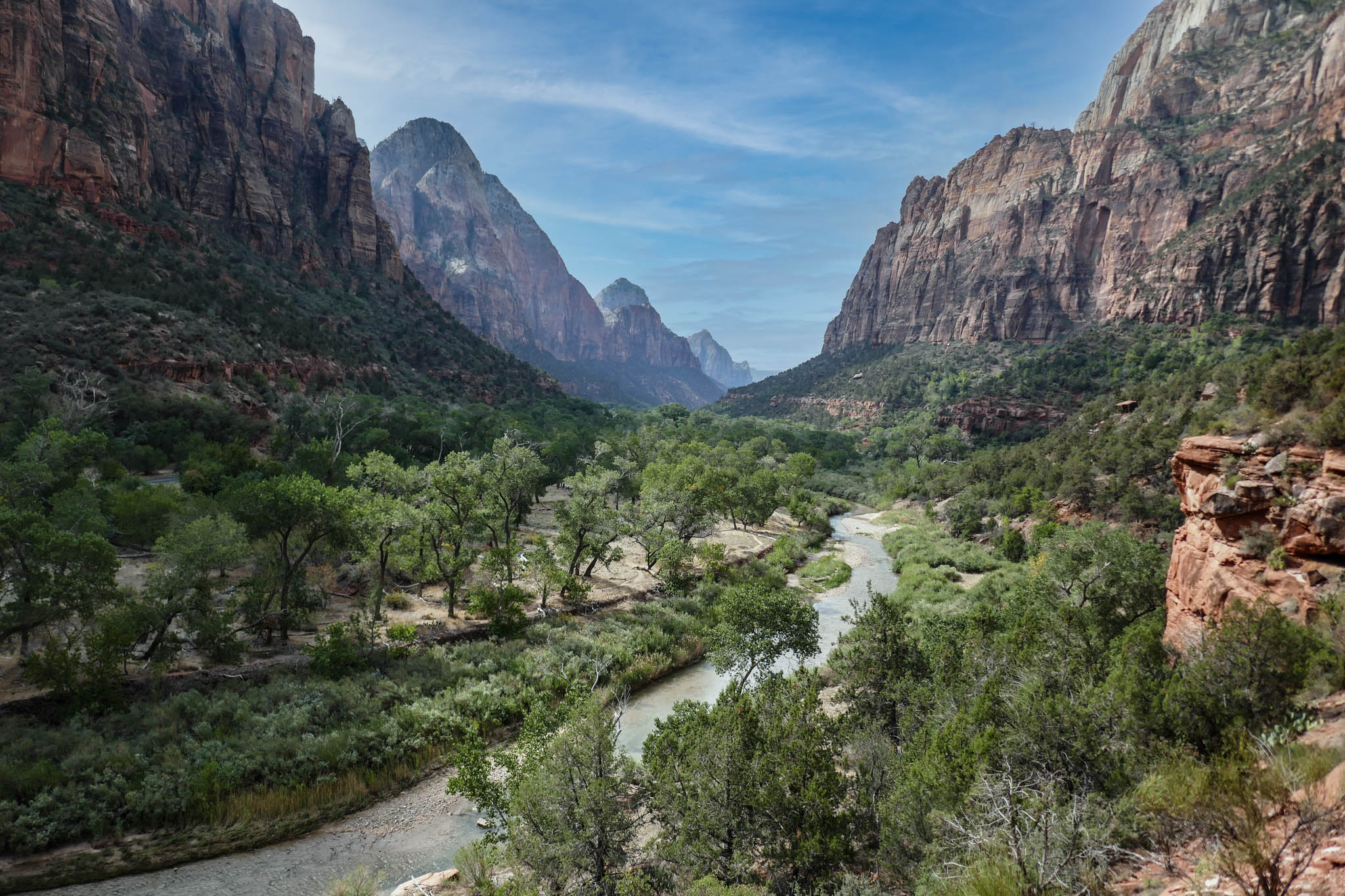 About a half mile into the hike, the people ahead of me stopped and stared at something off-trail. Wow, my first tarantula in the wild. Not as excited as I might have been since that sucker could move really fast. I moved faster in the opposite direction after taking a quick snap to prove I was brave enough to venture in for a portrait of it. 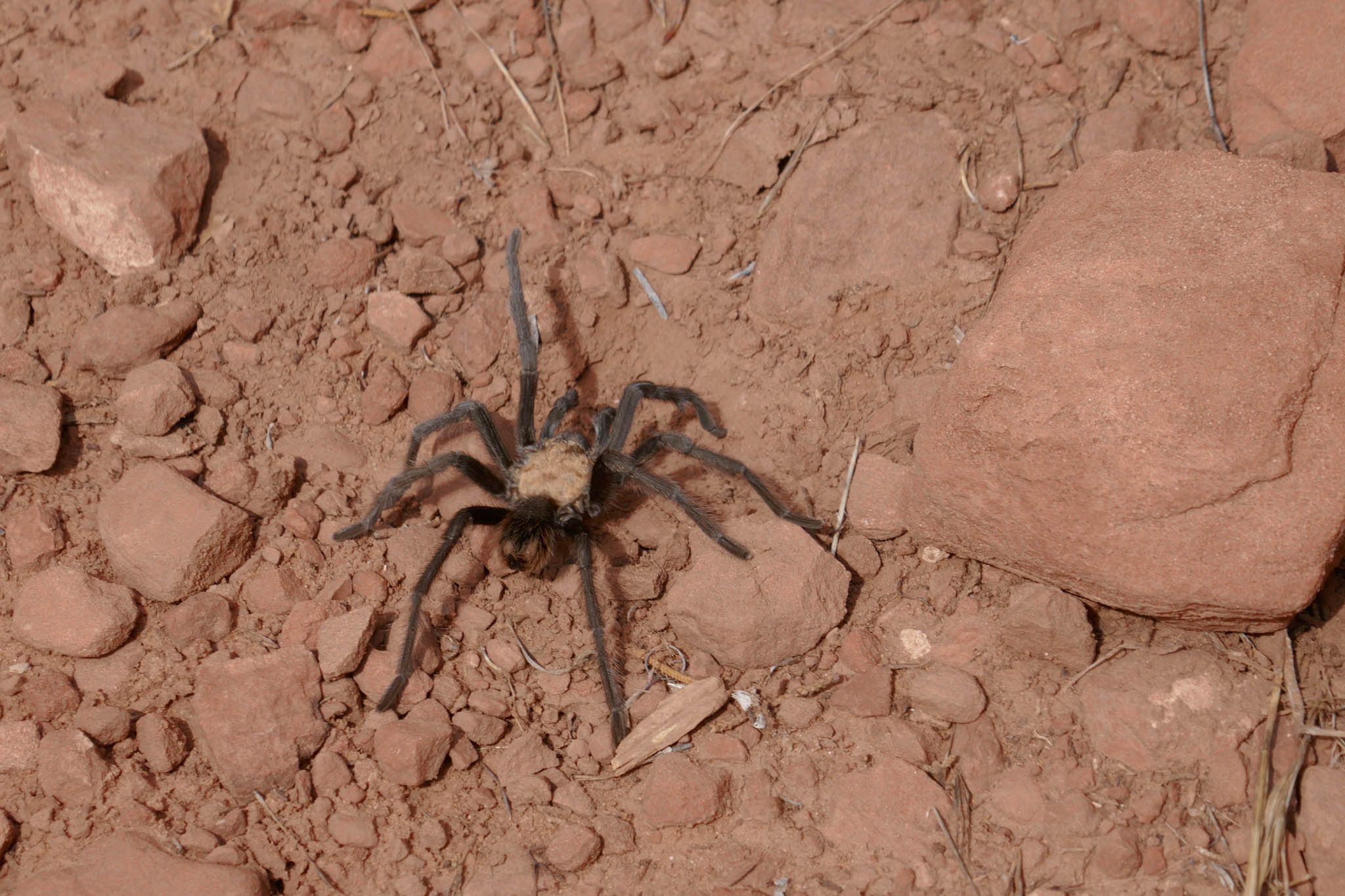 I got lucky on my way back down from the Emerald Pools. I had chosen the upper trail back to the lodge because it seemed like most of the hikers were taking the lower trail. I was rewarded with some beautiful sights and, off and on, completely quiet and deserted sections. For a few minutes, I could imagine what it must have been like to hike this place a few decades ago, before the marketing and crowds changed it into a “must see everything in one day” kind of place. (You can see some hikers in the lower left corner, to give you a sense of scale.) 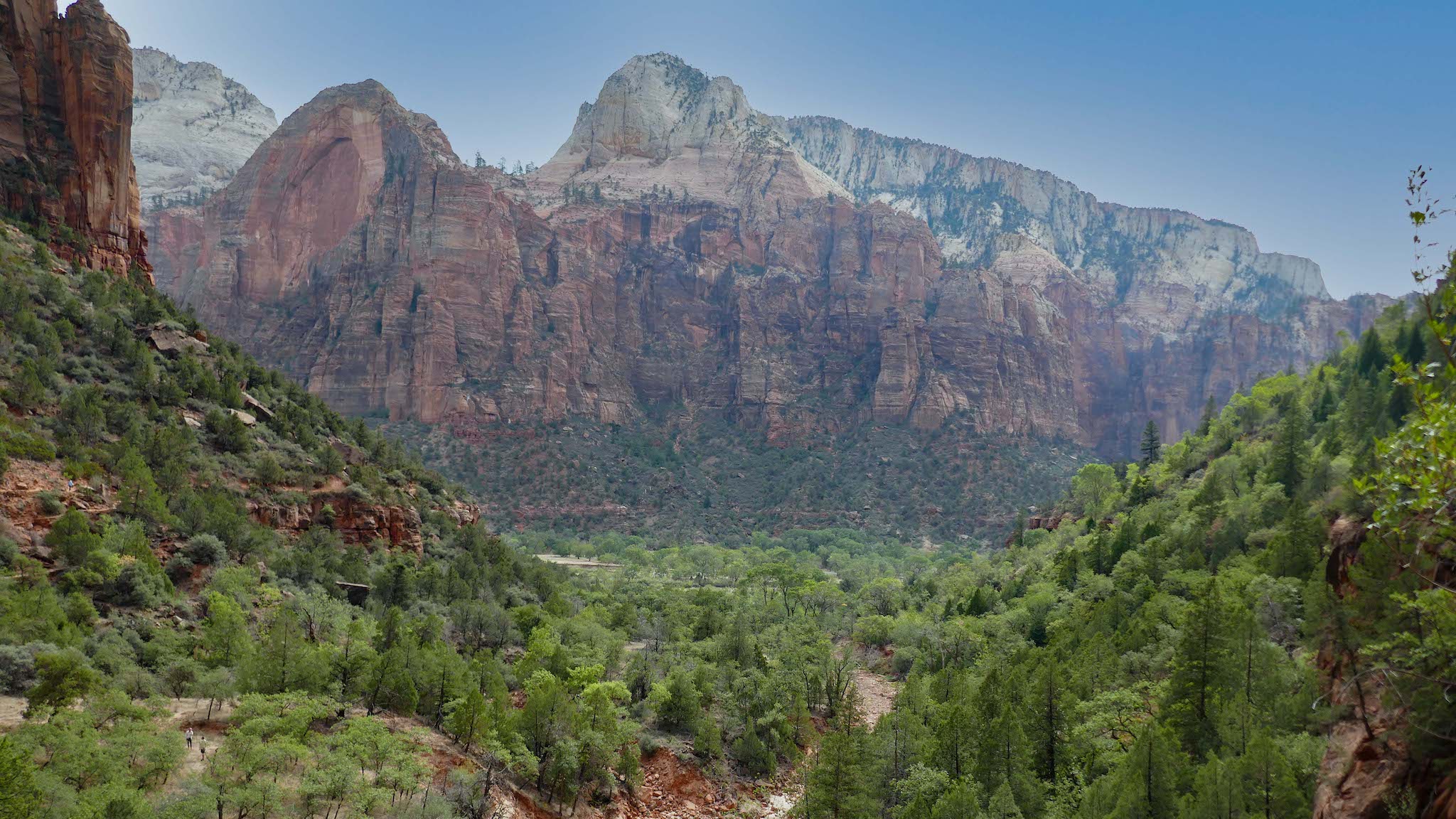 On my last full day at Zion, I took the shuttle all the way to the Temple of Sinawava, the end of the line. This is more popularly known as the start of the Narrows hike in the Virgin River, but since my knee wasn’t 100% at this point, I decided that walking on big, slippery rocks (think large cobblestones) probably wasn’t the best idea. Instead, I hiked the Riverwalk trail to the Narrows departure point, and then explored side trails on the way back. I made my way down a dead-end trail where I sat and watched the sun come over the cliff on the left and light up the one on the right. It was after noon before the sun came down into the canyon, that’s how deep it is. 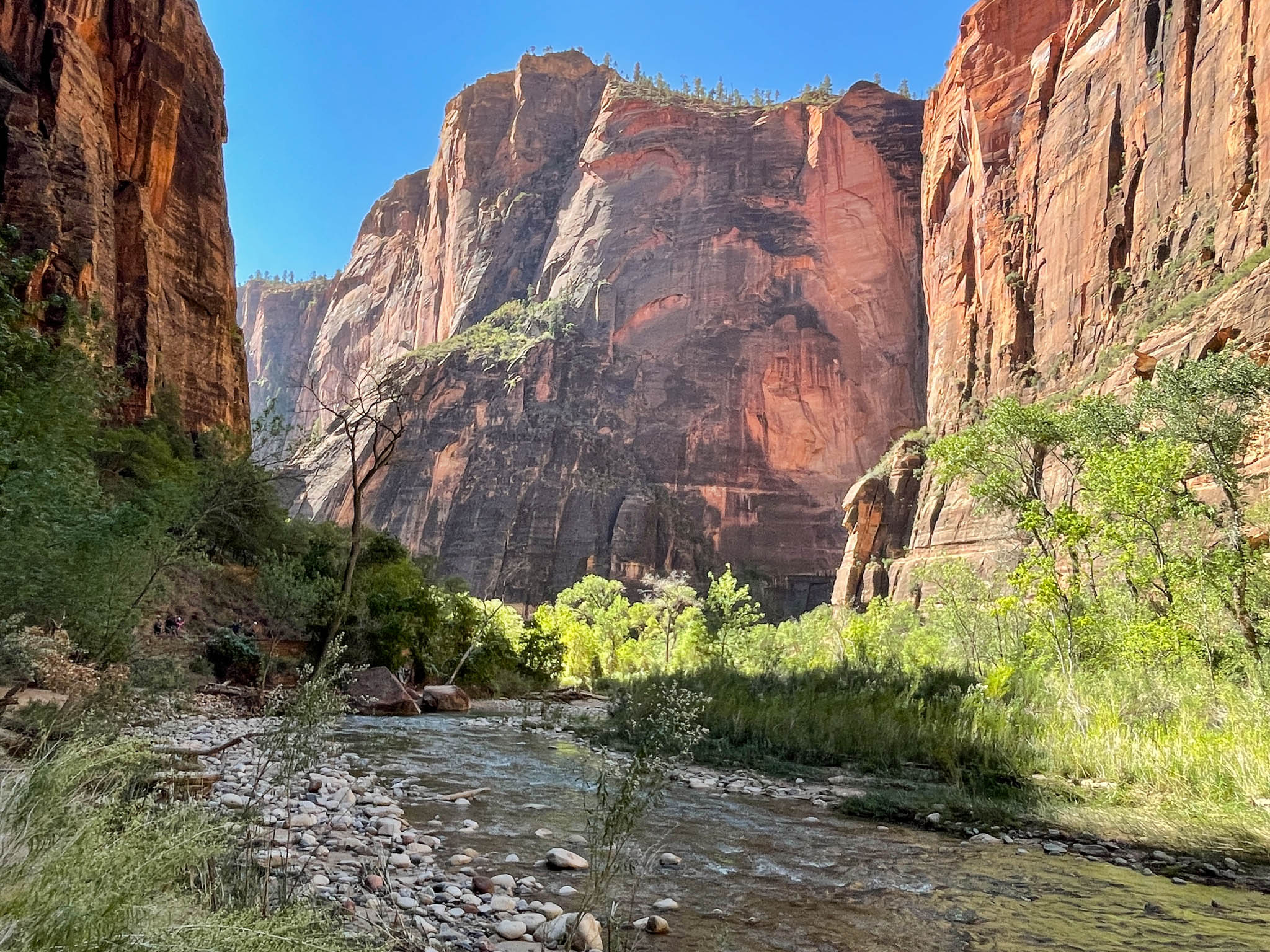 One of the coolest sights on the trail was this “weeping rock”, a sheer wall dripping with water and the plants that take advantage of the moisture. I was not the only person staring straight up and trying to get a sense of how tall that wall was. I still have no idea. 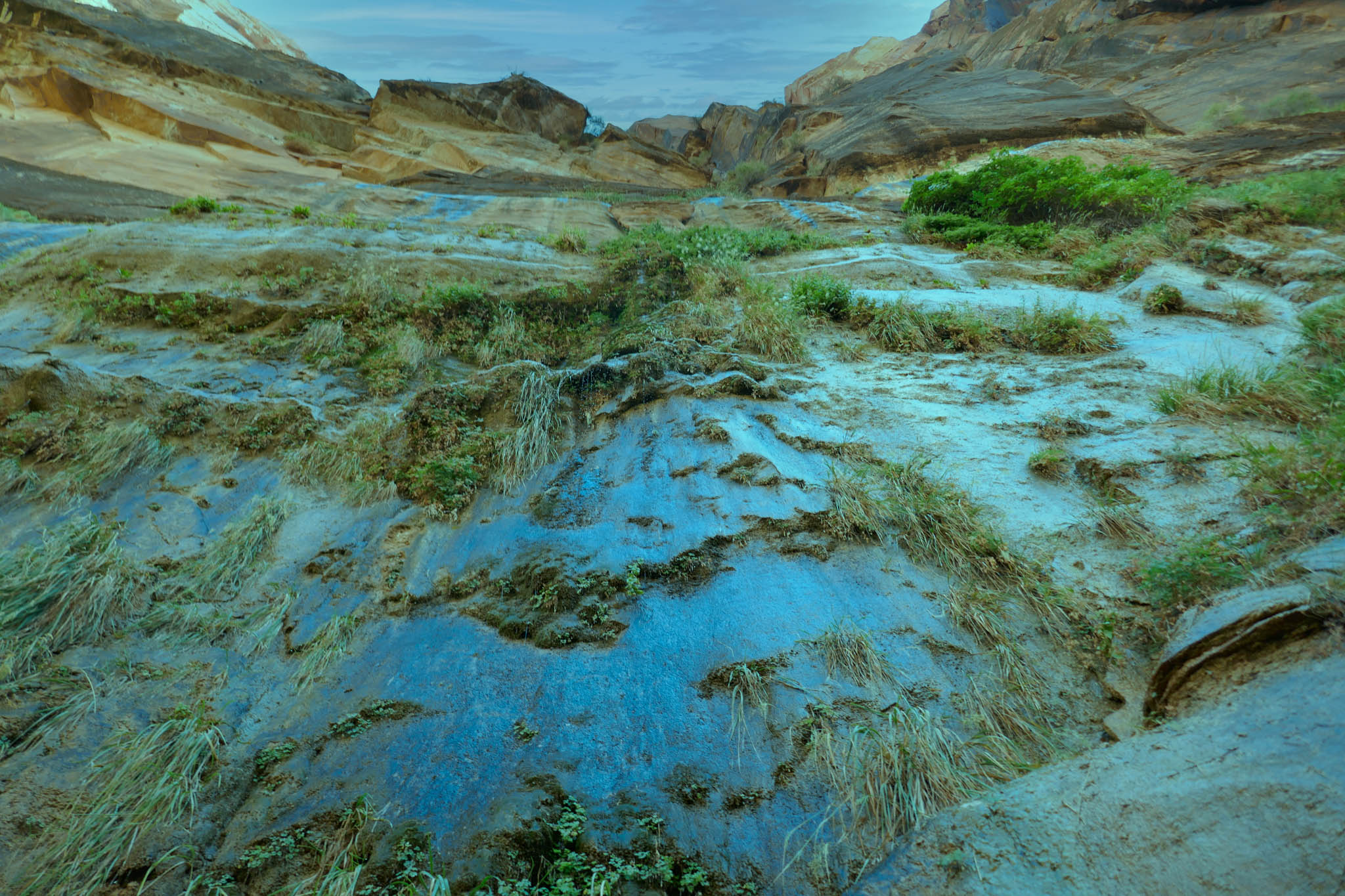 OK, one small disappointment to add to my shuttle bus diatribe earlier. They need to clean the windows on the busses. Honestly, if you’re going to make me ride the bus, at least let me have clean windows to snap photos through!

Sometimes, a day in the life of a vagabond is pretty tedious. Such was one of my days at Zion, where I needed to get propane and a flu shot. Given the propane was 25 miles away in Hurricane and the flu shot was in St. George, another 16 miles down the same road, I figured I might as well spend my day driving and hit up Kolob Canyons on the way back from those exciting errands. It was a very good reward for a morning spent adulting. 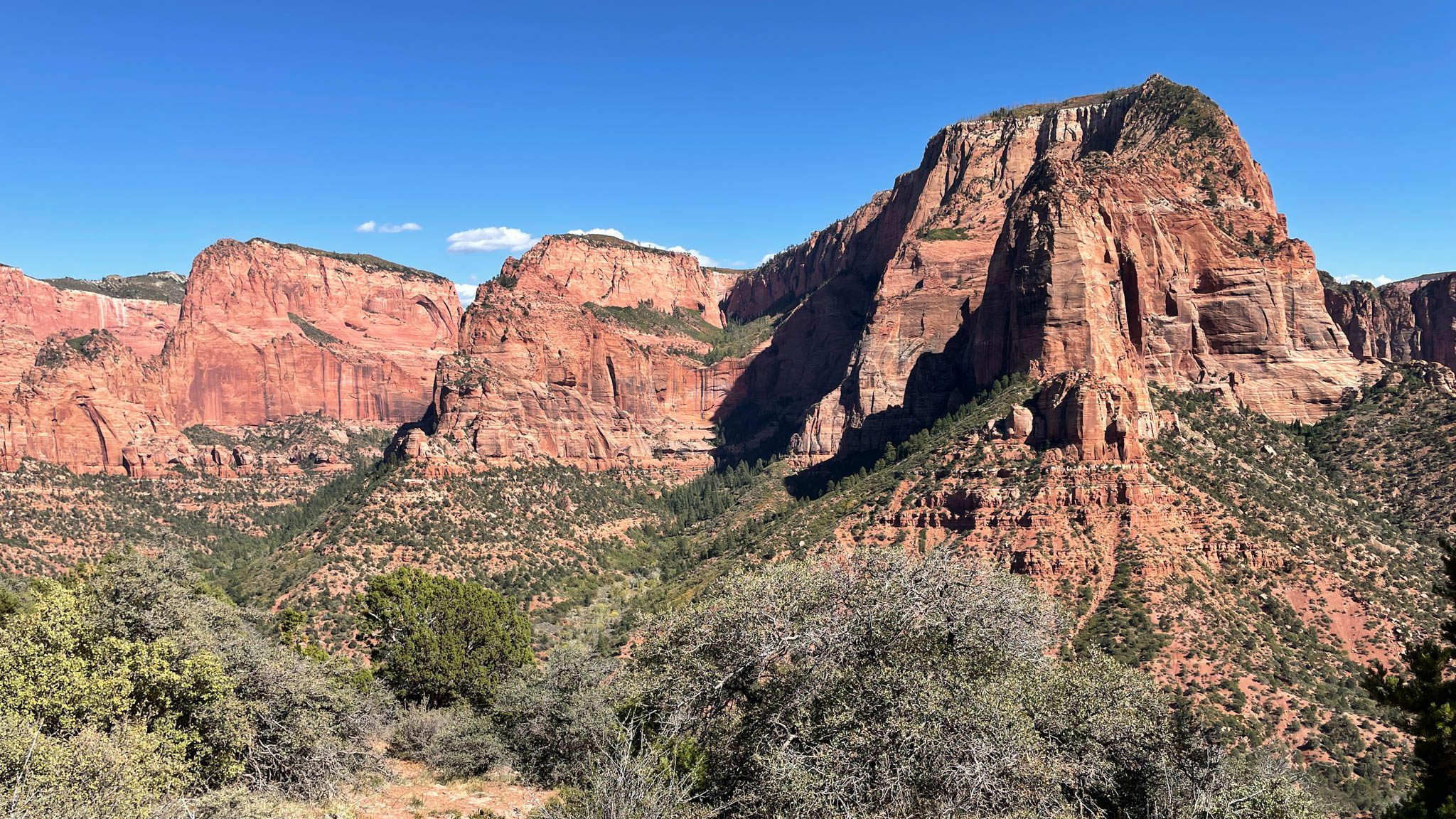 Kolob Canyons is part of Zion National Park but to get there, you have to drive about 40 miles, a lot of it on 1-15. That was the least fun part, especially when a triple-trailer truck (three trailers behind the driver’s cab) starts to sway just ahead of you. Thankfully, I wasn’t towing, so I could zoom by that dude and not have to watch a slow-motion disaster in the making. I guess he did OK after all, as there wasn’t a big accident on the freeway as I came back a few hours later. Given my own sway accident, I definitely don’t want to see it happen to anyone else, or watch someone come close to having one. 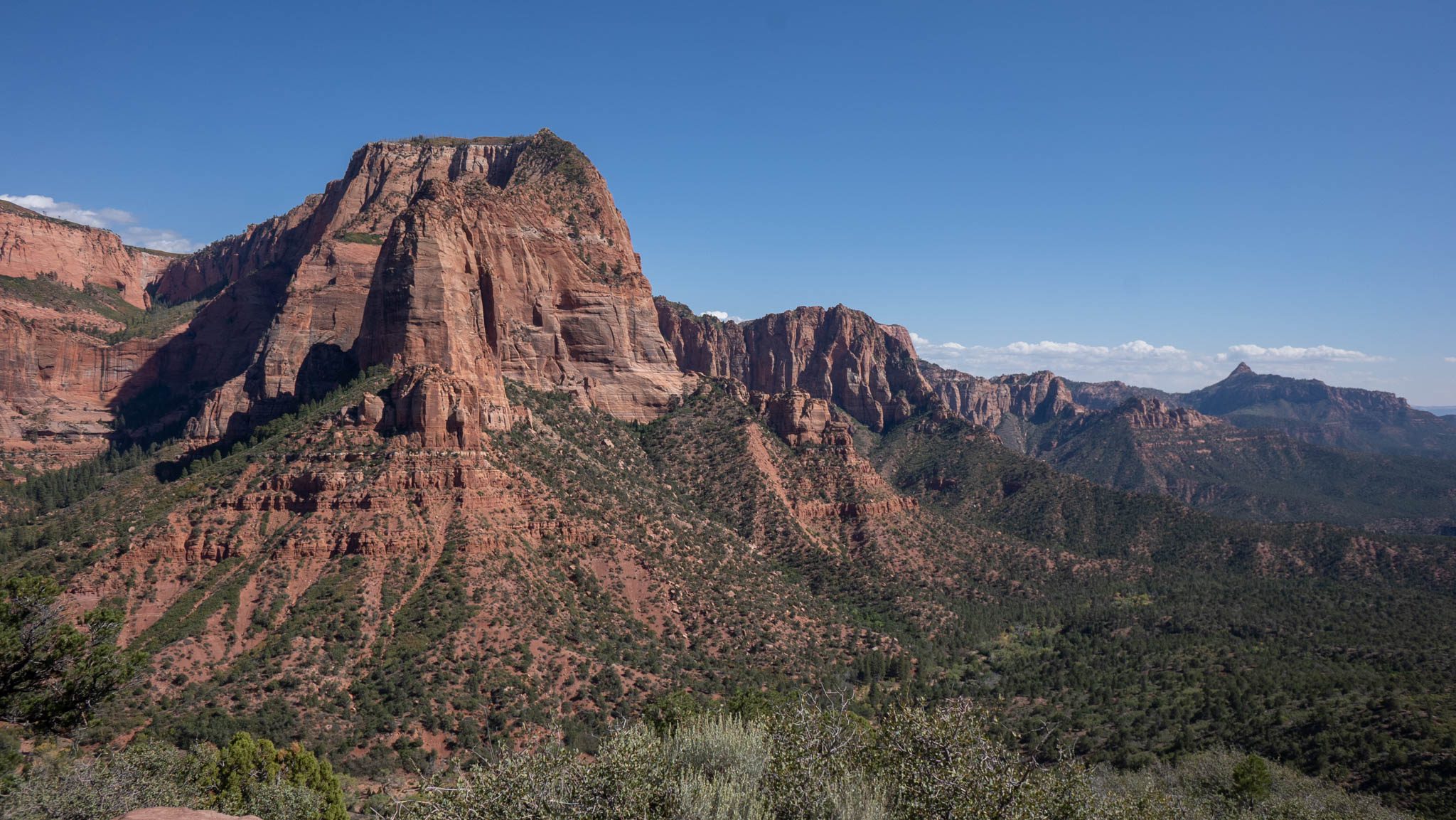 Anyways, Kolob Canyons was worth every mile of the drive out and back. Gorgeous rock formations, a few arches in the making, and visibility all the way down to the Kaibab Plateau, I swear. 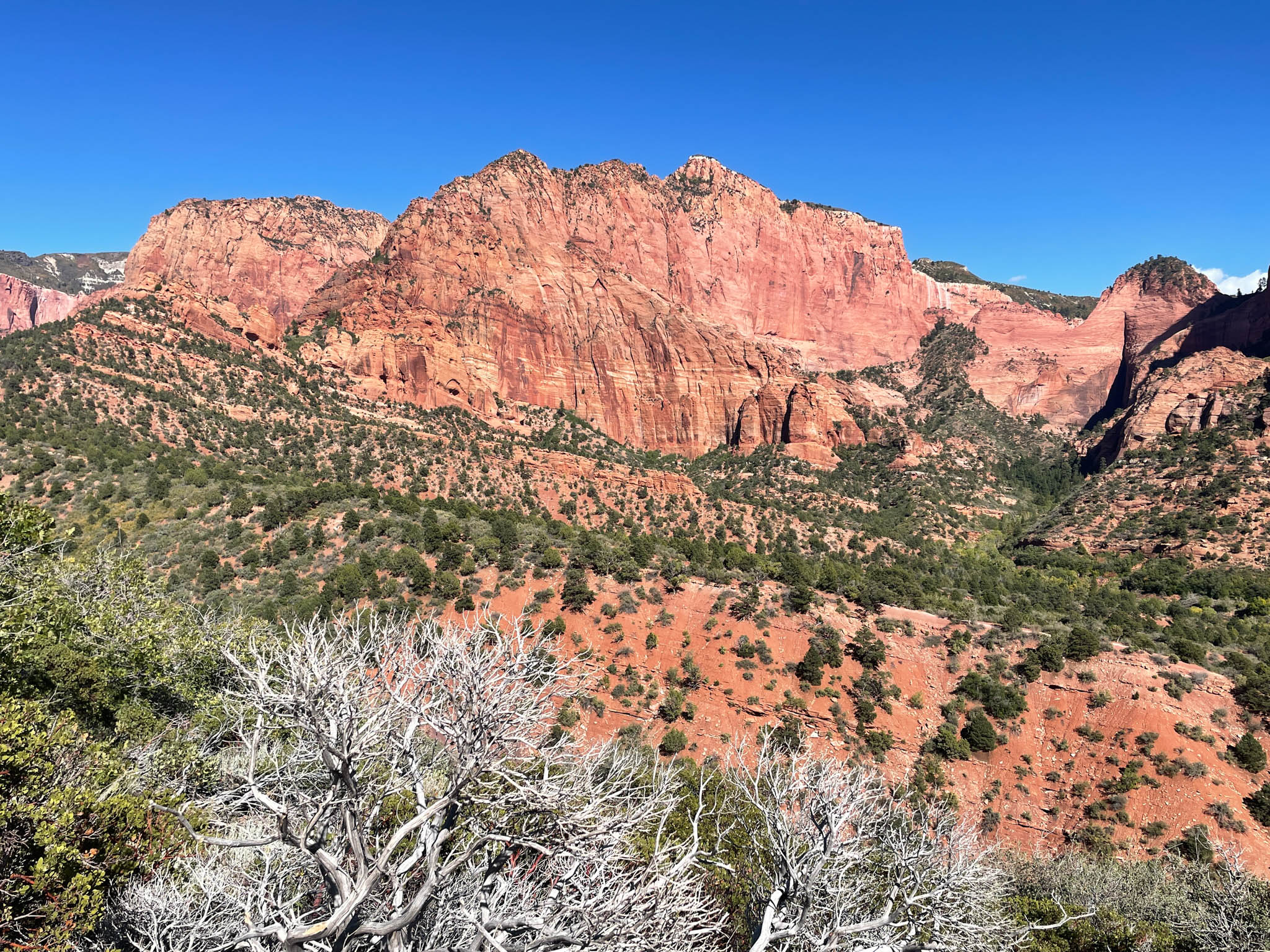 I highly recommend driving the scenic road (yes, another one! Utah is full of them.) to the viewpoint and then hiking the mile or so to the end of the viewpoint. The whole way is full of beautiful things to see and I took my time enjoying every foot of the trail. 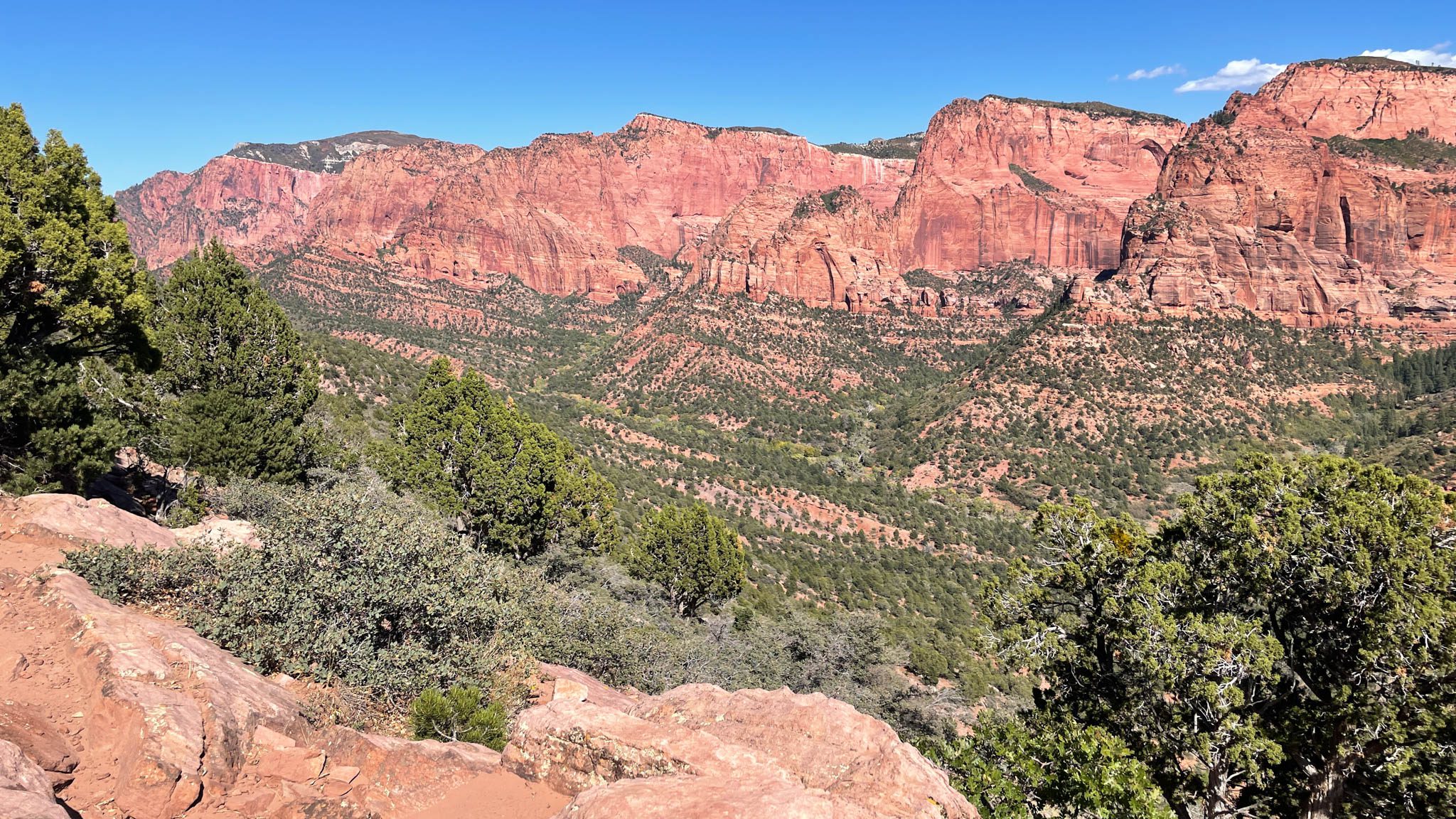 I spent five days in Zion and feel like I’ve just barely scratched the surface of the place. This is one park I’m definitely coming back to, although probably trying for off-season visits to have better access and less crowds and cars.

Yet another place that was a national monument first, then became a National Park. Created as a National Monument in 1918, it only took a year before Zion received National Park status. It includes the only designated “wild and scenic river” in the state of Utah, the Virgin River. And while I, and most visitors, only see a fraction of Zion, 84% of the park is wilderness  (no roads, no settlements, no visitor centers).

The Ancestral Puebloans were in the Zion area about 2000 years ago, followed by the Pauites about 800 years ago. The Mormons came through exploring the area in the 1860s, giving the place the name “Zion”. (They weren’t wrong in using that name; one cannot help but feel awe at the immensity of the place and see it as a sanctuary from the desert surrounding it).

Zion is on the edge of the Colorado Plateau. It’s below Bryce as far as the geological layers go, so the bottom layer of rock at Bryce is the TOP layer at Zion. And Zion’s bottom layer is the TOP layer at Grand Canyon. All of this is part of the Grand Staircase, which I’ll dive into on my next post, so more on that then. Just kind of mind-blowing to realize that those beautiful cliffs at Zion are the bottom of the hoodoos at Bryce!

As with the other places on or around the Colorado Plateau, the four major geologic processes have sculpted Zion into the canyons, towers, and temples we see today: sedimentation (deposits of sand, mud, etc. from 110 to 270 million years ago), lithification (changing those deposits into stone), uplift, and erosion. How uplifted is Zion? Oh, just about 10,000 feet above sea level in places (before erosion), and that uplift is ongoing as the earth’s tectonic plates move.

Want to Know More? Check out the Geology of Zion Canyon (NPS website)

Because when beauty awes you, you must halt and try to catch your breath and your staggered heart.