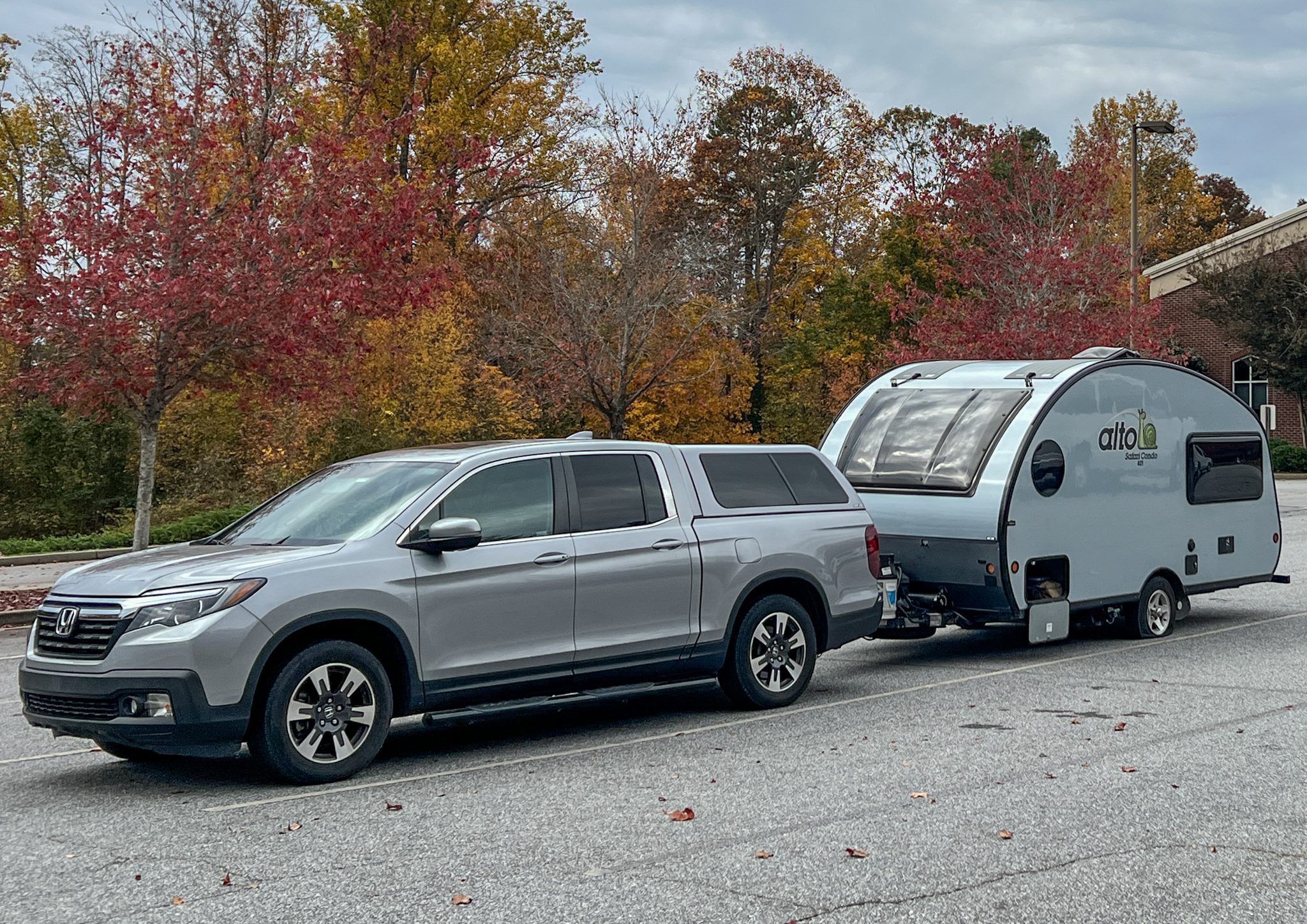 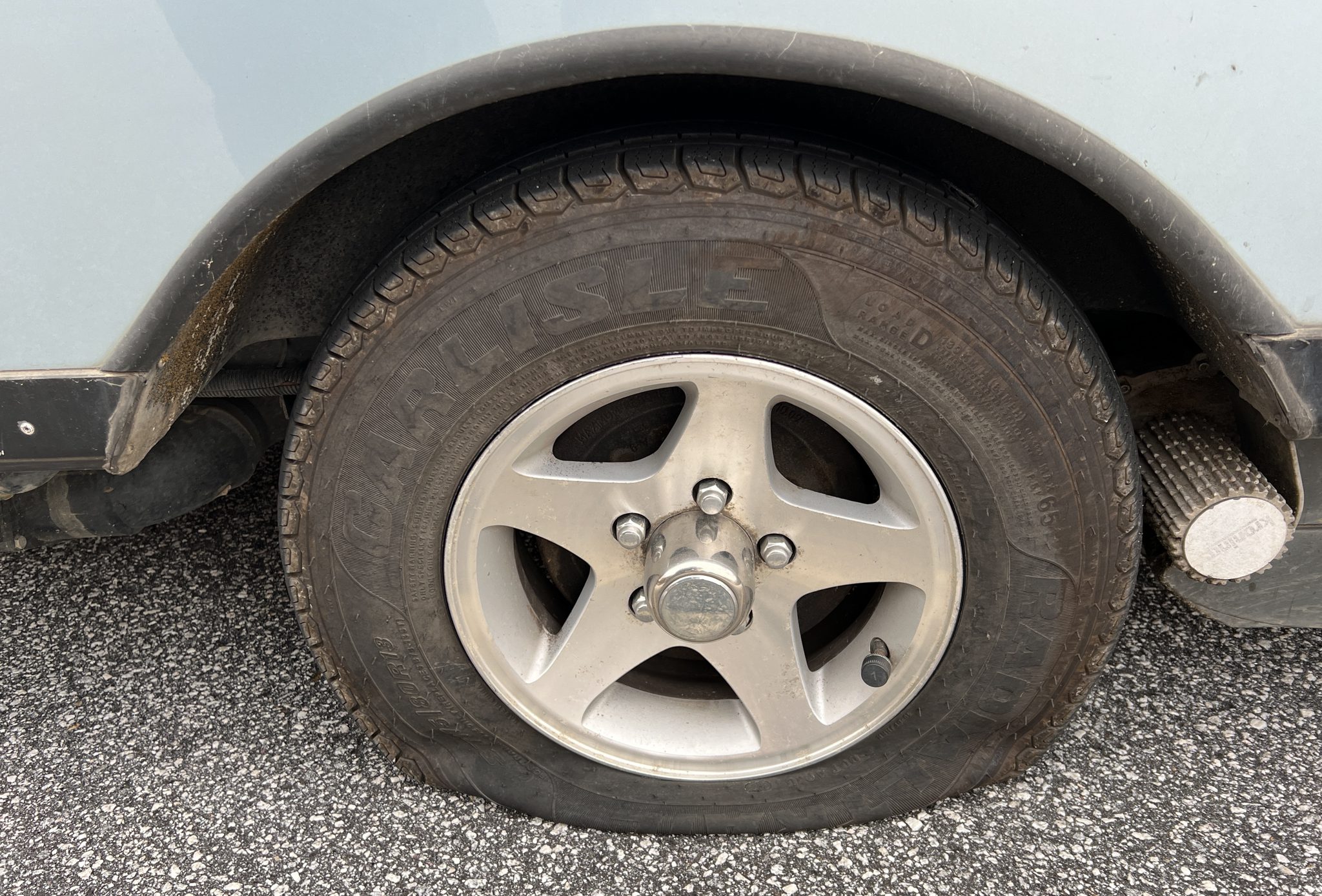 I was heading south to Georgia, not even 20 miles from my previous campground, when my TPMS (Tire Pressure Monitoring System) went off on my left trailer tire. I had been stopped at a light and about two seconds after I stepped on the gas, the TPMS went nuts. I checked the number, which had been at 65 psi when I started the trip. Now, it was at 53 psi. By the time I turned off the main road a half block later, it was down to 45. By the time I went another half block to an empty church parking lot, the TPMS was at 33. And two minutes later, it was all the way down to 9. Wow, that was fast.

I looked at the tire and could see a chunk of shiny metal embedded in the rubber. Not good. I dialed up my Good Sam Roadside Assistance and after playing 20 questions with the representative (does the tow service/tire changer really need to know the color of my trailer when I am literally the ONLY trailer in a huge empty parking lot?!), I was assured a tow truck would be texting me within 15 minutes to let me know their ETA. Sure enough, text received, with an estimate of 45-90 minutes. I had time to do a bit of a walk, getting some exercise in and also trying to burn off the adreneline from the whole tire going flat thing. Then I dug out my torque wrench and my special deep-walled lug-nut socket, just in case they didn’t bring them. Last time I had a trailer flat, back in June of 2017 (also from road junk!), that tow truck had neither. This time I was prepared!

A bright-red tow truck showed up on the horizon (well, at the same stoplight where I got the flat tire), and Jason went to work. This dude came prepared. He had the right lug nut socket, a power drill to loosen and tighten the lug nuts and a torque wrench to check the pressure. He was also a good sport about getting the spare tire out of its difficult hiding place, screwed to the underside of the trailer tongue. In short order, he had the spare tire on. And then he was all like “peace out” because they don’t actually *fill* the spare tire if it needs air. Good thing my toolkit also includes an air compressor that runs off my 12v battery!

The fun wasn’t over yet, though, folks. That spare was 6.5 years old, the original one from when I picked up the trailer in May, 2016. I kept saying I was going to replace it but I kept forgetting that whenever I changed the two tires on the axle. My bad. Now it was my very bad because I didn’t want to drive on that thing any more than I had to, and certainly, I wasn’t going to drive another 150 miles to the campground where I had reservations for the night.

I called around to tire stores, looking for my very specific tire size (ST175/80R13). On the fifth try, I found a place that said they had five in stock. Whee! Google Maps told me it was 13 miles away. And that it would take me 45 minutes to get there. Google Maps was right. The traffic was a snarly mess because the last 3 miles or so was a hellacious landscape of strip malls; you name the store, I probably drove past it.

After arriving at the store, I learned a very critical fact about trailer tires. The five holes where it mounts onto the axle are not always the same distance apart. Who knew? The tire place had 5×4.5 inch holes, which is perfect for open trailers, like the ones all those landscaping companies use. *My* tire was 5×5 inches, so clearly not a fit. And just to make things even more annoying, it started to rain even though the morning’s forecast has not mentioned a drop of rain expected. Figures…

Two blocks away was a Discount Tire store, so I figured I’d go there and see if they could maybe salvage the tire with the big chunk of metal in it. I’d called them already and they didn’t have my tires in stock. Neither did anyone else, so I really didn’t know what I was going to do but I figured the next step was to see if that flat tire was even remotely fixable. Jason, the tow truck guy, thought it might be, but I was thinking it probably wasn’t.

I won that bet. I wish I’d lost. But, and here’s where my luck changed, this was actually *not* the Discount Tire I had talked to earlier. And this place had four trailer tires in stock, with the 5×5 configuration I needed. I was never so happy to spent 2.5 hours in the waiting room of a tire place in my entire life, after I’d backed my trailer into a spot near the dumpster because tow vehicle + trailer won’t fit into any bay at a tire store.

They had wifi, which meant I could cancel the night’s campground reservation and make a reservation at a hotel about an hour’s drive south for the night. Sure, there was a hotel from the same chain (I use points for rooms a lot) just down the street, but it was literally a mile of strip malls and I just wasn’t up for that nonsense.

By 3:30PM, my Alto had a shiny new set of trailer tires (Hartland brand) and I got to watch the tire technician do the torque wrenching to make sure the lug nuts were solid. And then, seriously, I drove the trailer exactly two blocks, parking behind a QuikTime gas station and store because I had a 4PM concall to make. My late lunch was a seriously OK steak and cheese taquito that I inhaled as I was setting up my laptop and hotspot for the call. After the call, I drove an hour to the hotel, thankfully in light traffic, and then spent the evening watching Terminator 2 on the room’s big screen because that required no thought at all and I had few brain cells left at that point in the day.

So, as with all incidents, let’s take a hot minute to review the lessons learned:

Today, I drove on those shiny new tires for 250 miles. Was I checking the TPMS a lot? Yes, yes, I was. The tires did fine, though, and after the first hour, I relaxed and enjoyed the drive through the back roads of South Carolina and Georgia, admiring the colors of the fall foliage.

You can’t spend the rest of your life tiptoeing around to try and avert disaster. It won’t work. You’ll just end up missing the life you have.
Kim Edwards (The Memory Keeper’s Daughter)

17 thoughts on “The best-laid plans…”