When I showed in in Providence, Rhode Island on a Thursday to explore the city a bit, I also took a 50-minutes boat cruise. That was a great way to learn more about the city and see it from the water, and it was also the first time I’d heard of Waterfire, the art event that happens every so often in the heart of the city. And, it was happening the very next Saturday! 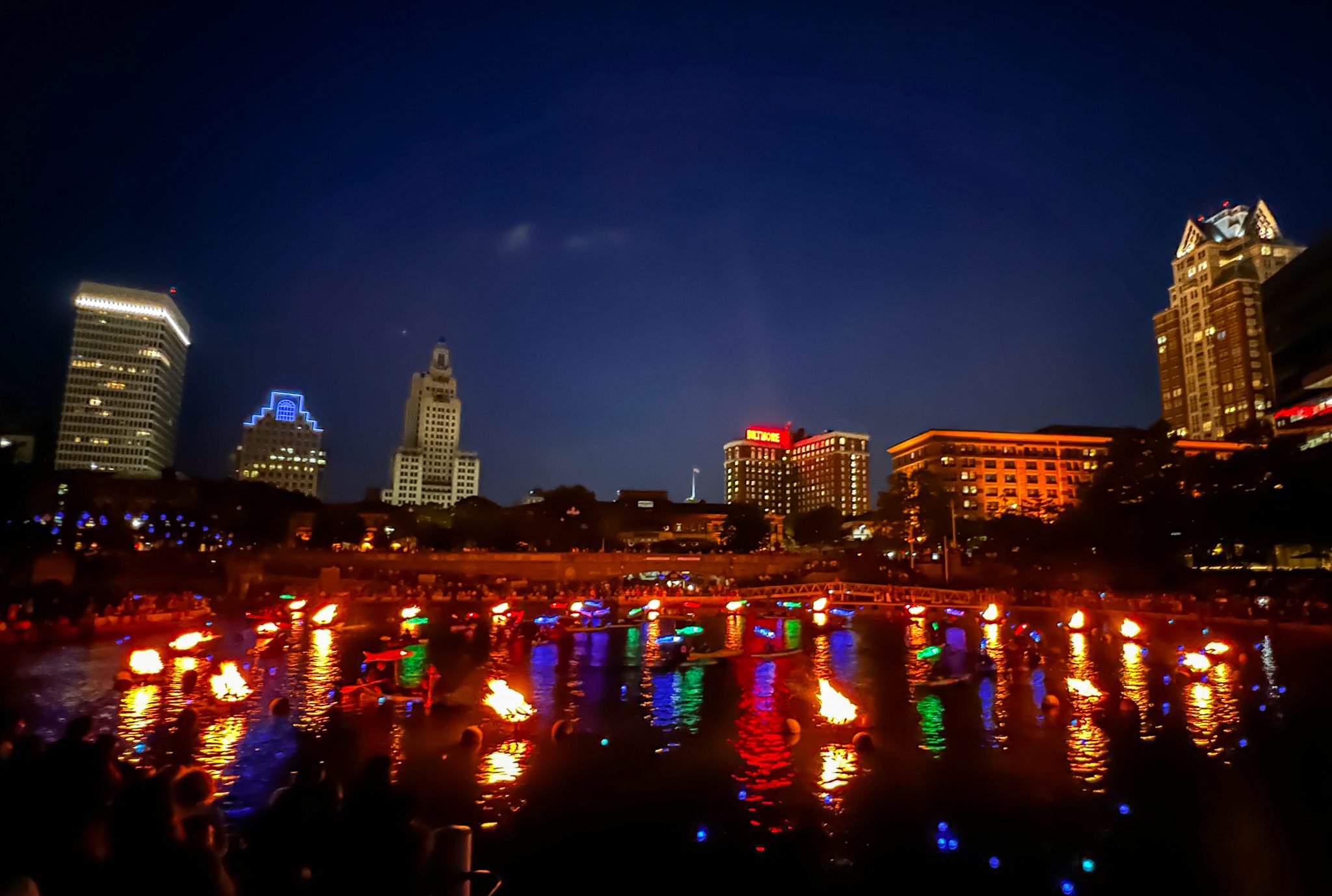 How could I resist that?! Short answer, I couldn’t!

I got into the city a bit before 4PM, unsure how big the crowds would be on this last weekend before Labor Day and the traditional end of summer in the northeast. I might have kicked off my visit with a little shopping at the mall, scoring a rainbow Apple Watch band. (Pro tip: park at the Providence Place mall garage for easy exit after you’re done with Waterfire; it cost me all of $2 for six hours!).

Based on what I’d seen on the boat tour, I really wanted to see this curved section light up so I walked down and staked out my spot. There were a lot of people, but it was easy enough to find a place to stand. There were also a lot of booths selling food and other things at this end of the event, about a half-mile walk from the mall and The Cove, which becomes the focal point of Waterfire once everything is set on fire. 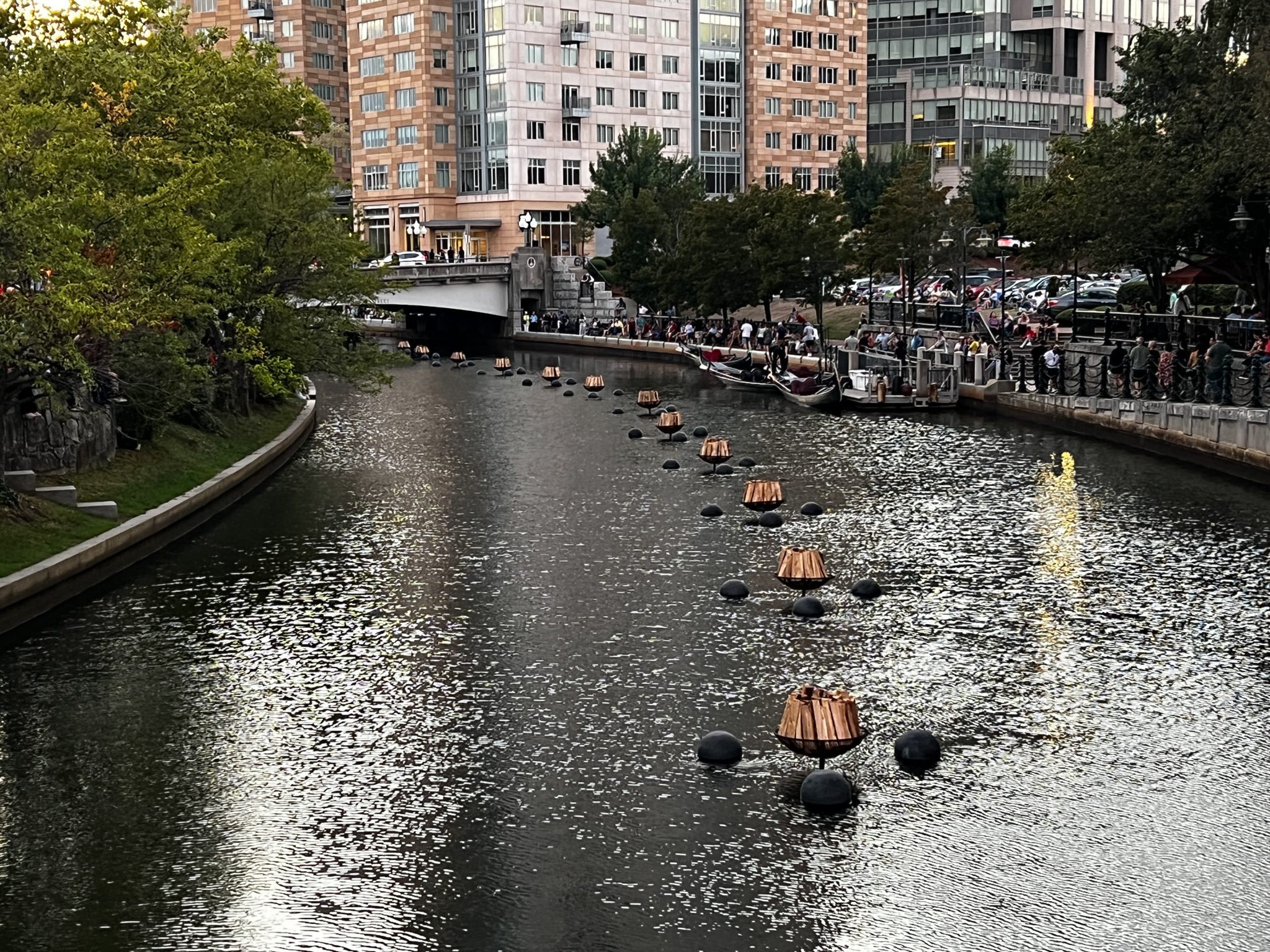 As darkness fell, a flotilla of boats carrying volunteers and fire artists started lighting it up. Very cool to watch the progression of flames and reflections on the water. 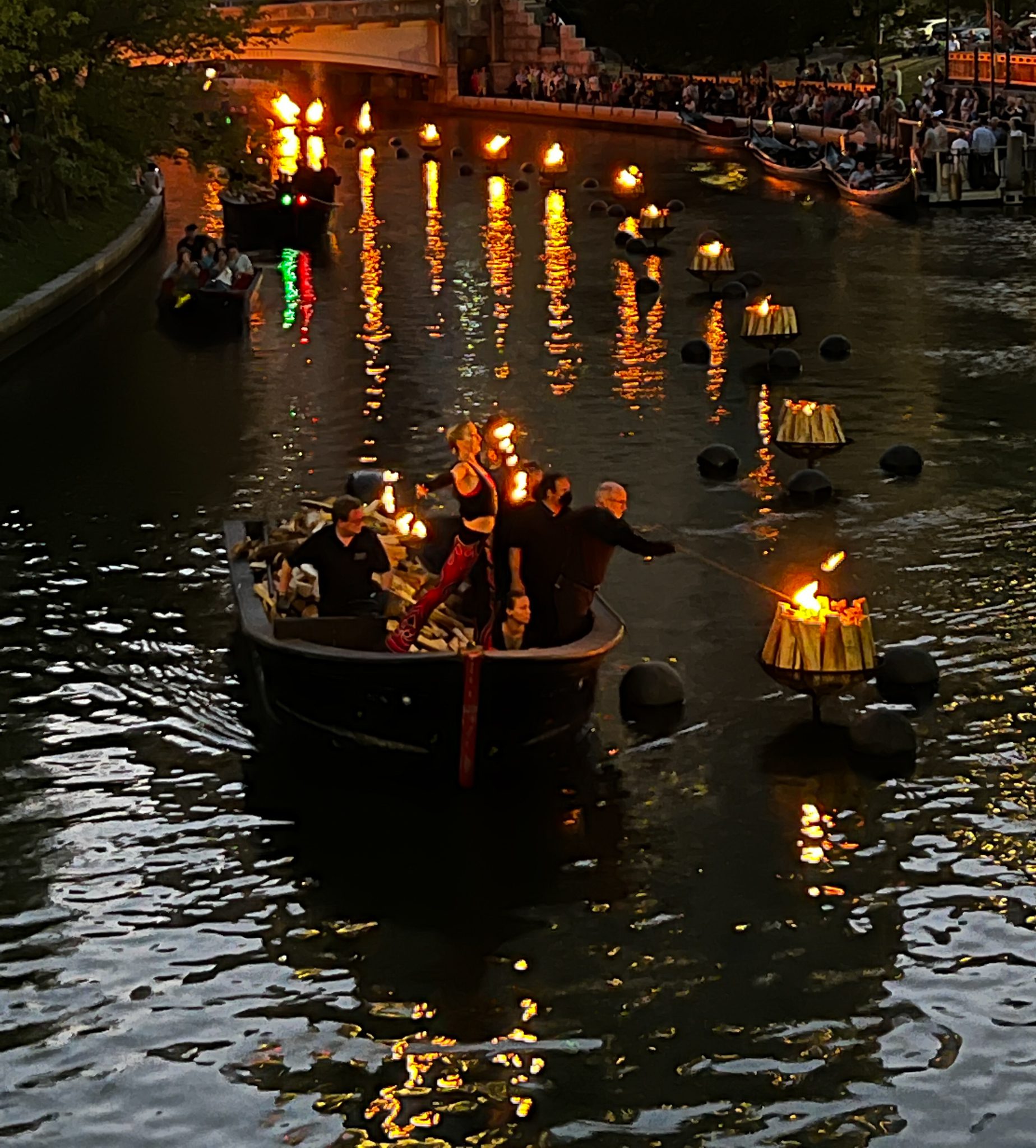 The fire artists were amazing, everything from fire jugglers to fiery poi to dance moves with two sets of lit candles (which is the one below). Each artist stands on the bow of the boat and they perform until all the fires are light, which is about 20-35 minutes (my best guess). 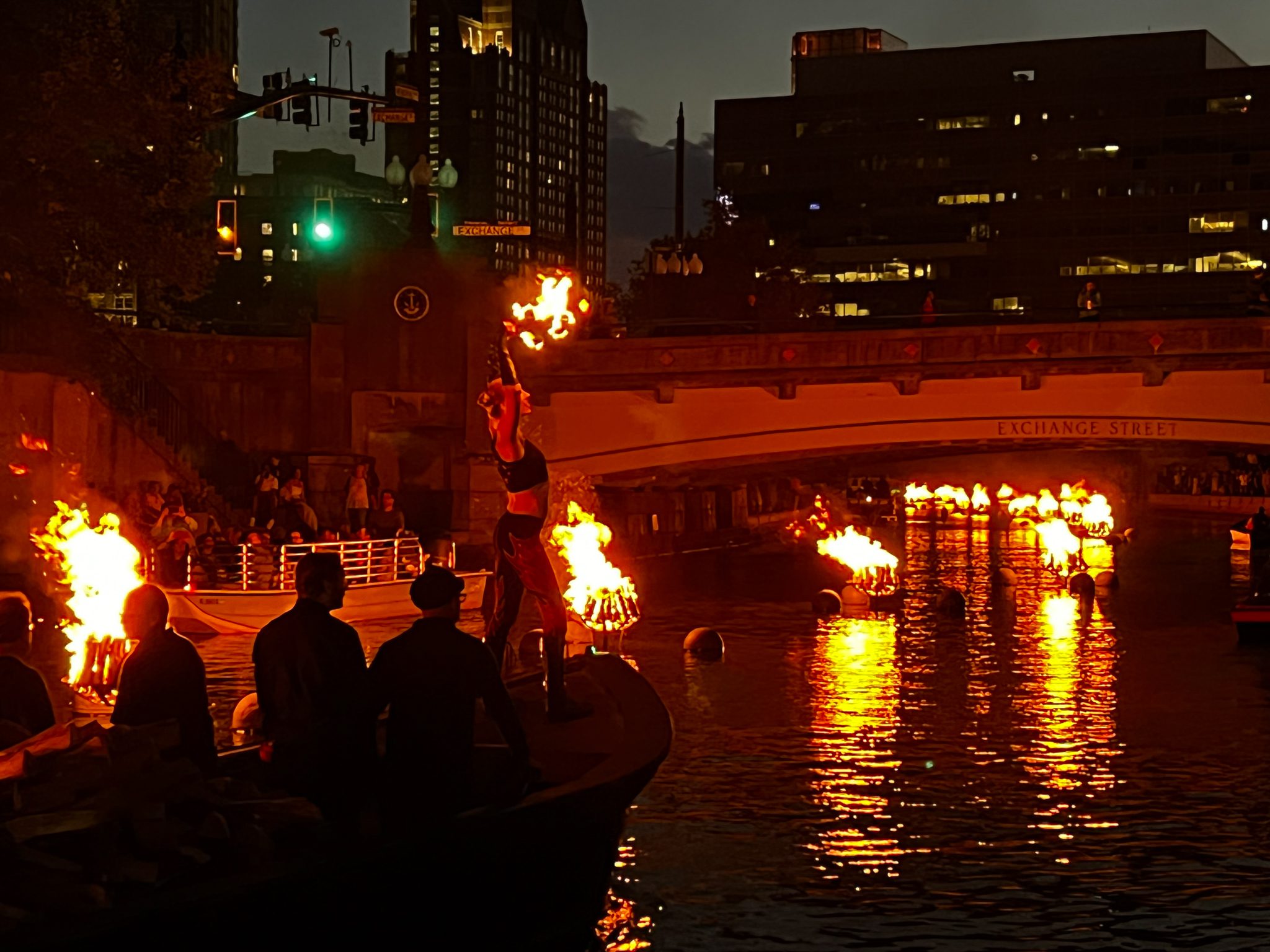 I slowly walked back towards The Cove, where the fire makes a circle of flames. This time around, Waterfire invited Clear Currents and kayakers to celebrate clean water in Rhode Island. About 60 kayakers each carried a large paper koi fish, lit up to glow in the darkness and the effect was beautiful to see. 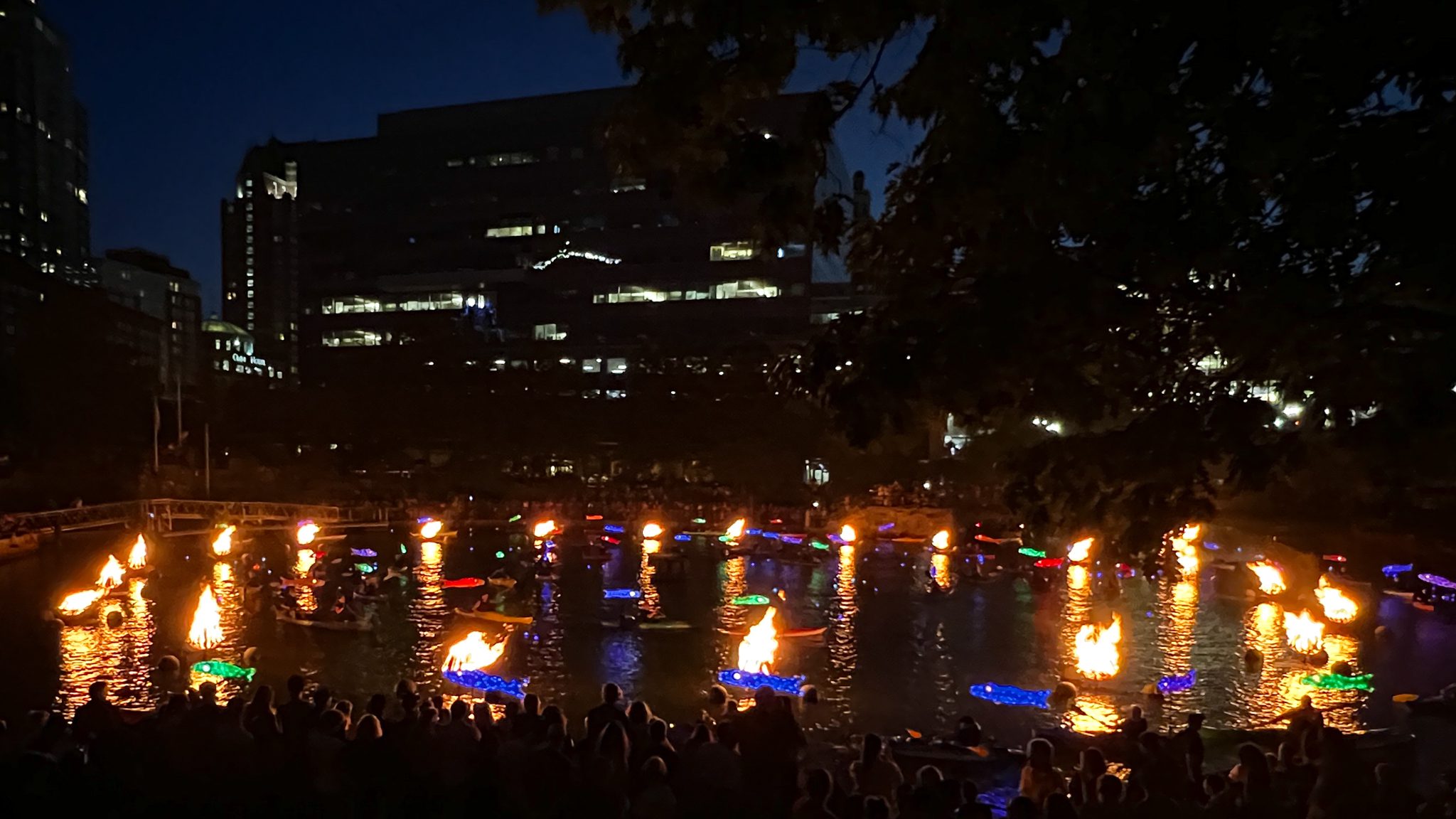 The kayakers got to improvise their moves, so at one point, they converged on one fire, much like real-life koi will do when someone throws food pellets into their pond. Kudos to whoever was choreographing the kayak moves! 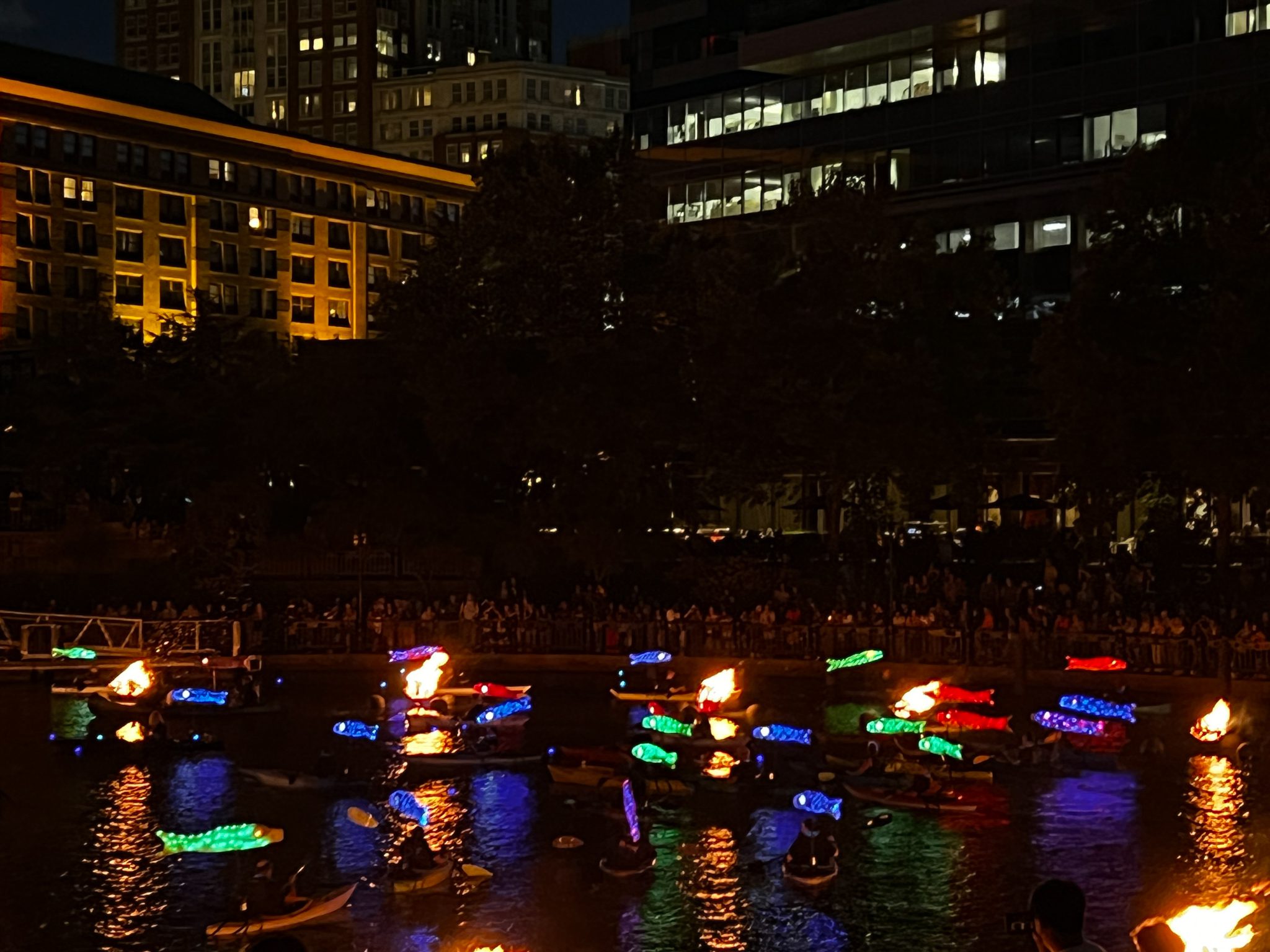 If you’re ever near Providence, see if you can catch a performance of Waterfire. It runs from 6PM or so till 1AM, which I would guess is about when the last of the flames dies out. I’m glad I drove the 90-minute round trip to see it because I’ve never seen anything quite like it!

The sky broke like an egg into full sunset and the water caught fire.