Last Friday was an absolutely gorgeous day in Burlington, Vermont so it was also the perfect time to take a lunchtime cruise on Lake Champlain. It was like the sky and lake knew I was in need of some serious soul food, and, boy, did they serve it up! 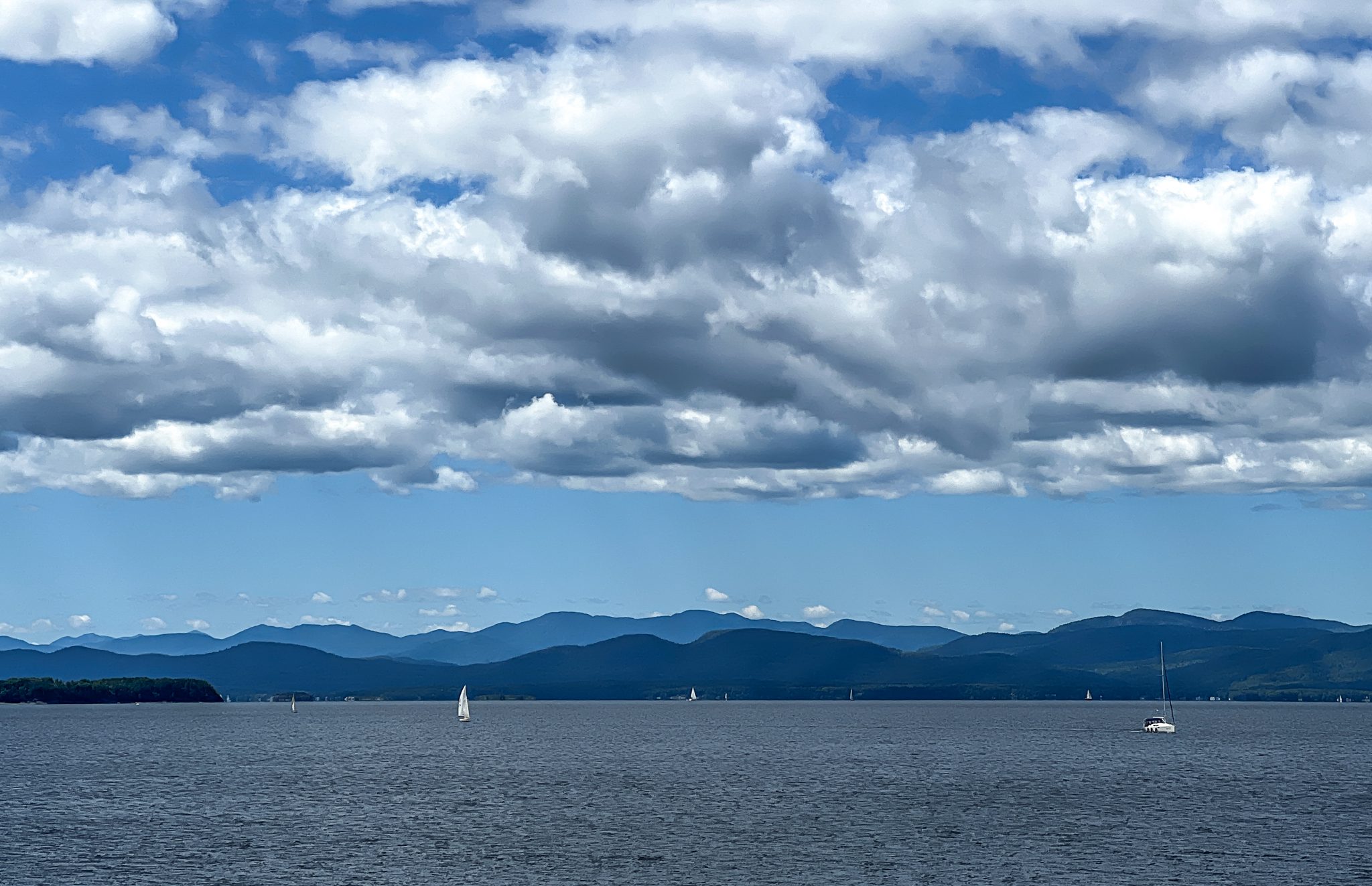 Right off the dock was this adorable lighthouse. Honestly, it was so cute, how could I not take like a zillion photos of it? 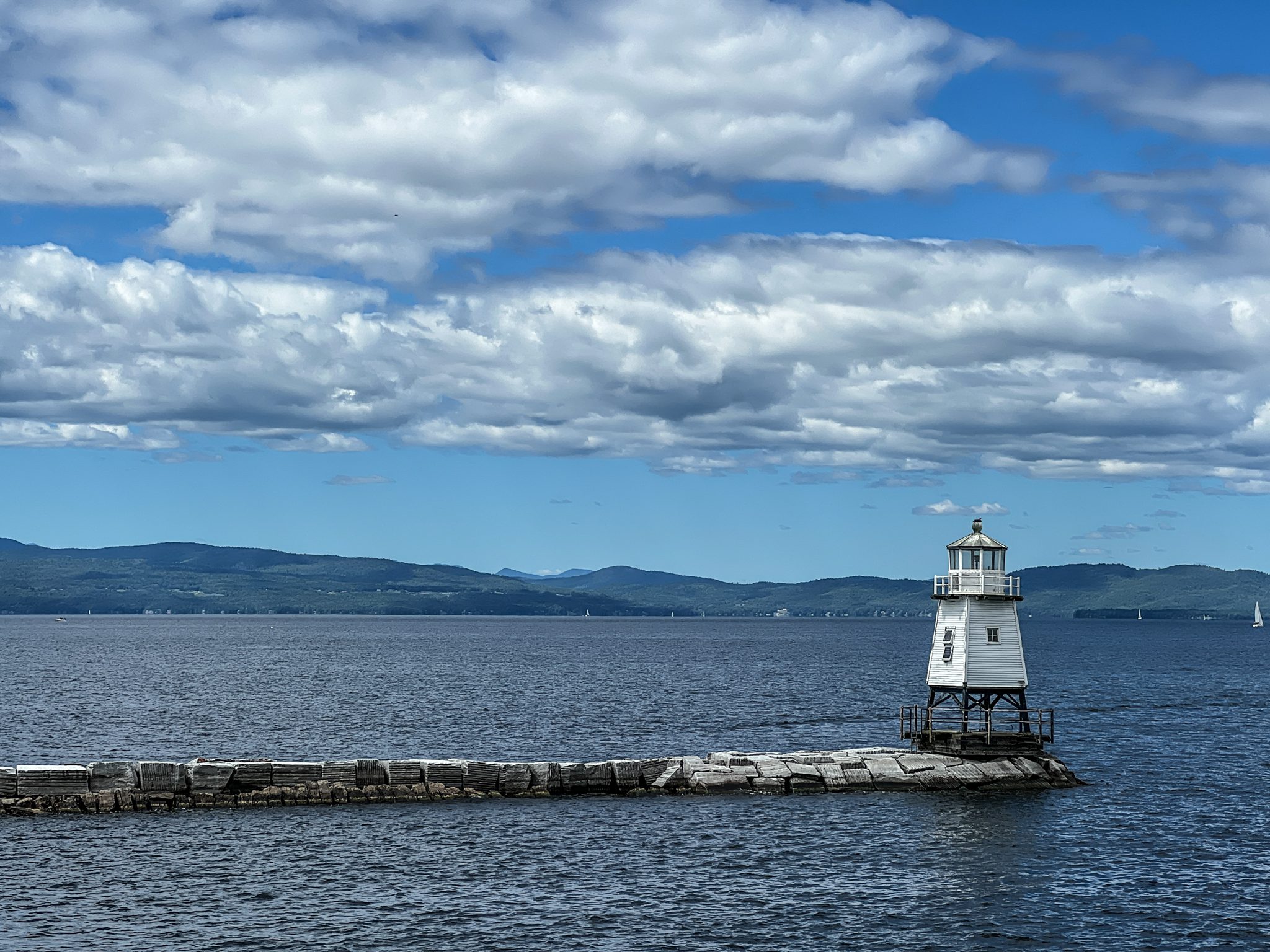 The cruise narration is pretty good, albeit pre-recorded. As we passed this interesting view at Lone Rock Point, the invisible narrator informed us that this is the Champlain Thrust, a 200-mile long geological fault that runs from the southern end of Quebec through Vermont and all the way into the Catskills and Hudson Valley. Lone Rock Point is the only place where the fault line is actually visible, though.

For all you geology nerds out there, the lighter line of rocks on top is Lower Cambrian Dunham Dolomite, which was, a very long time ago, thrust on top of the Middle Ordovician Iberville shales. Translation for non-geology nerds: That lighter rock is actually millions of years older than the darker rock, and so it should be underneath the darker rock. But it’s not! That’s plate tectonics at work, but you rarely see such clear evidence in the Northeast (you can see it all over the southwestern US). Pretty cool. And all this happened over 500 million years ago, which sounds like a made-up exaggerated fact, but it’s not. 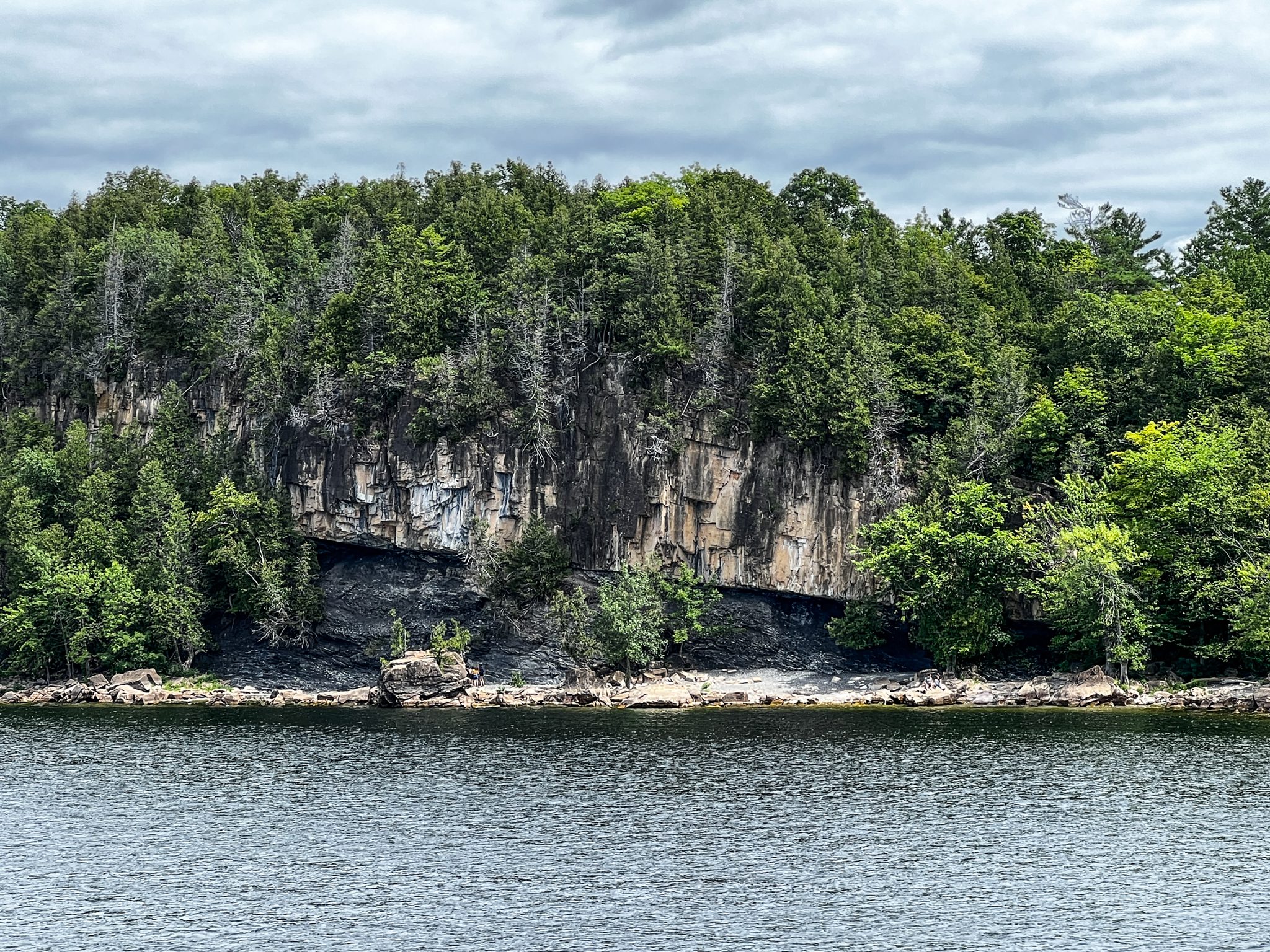 The other interesting rock formation spotted on the cruise was at Red Rock Park in South Burlington, at the north end of Shelburne Bay. The rocks are red Monkton Quartzite, part of a formation that extends along the eastern edge of Lake Champlain from north Burlington to Shelburne Bay, and they too are part of the Champlain Thrust action. 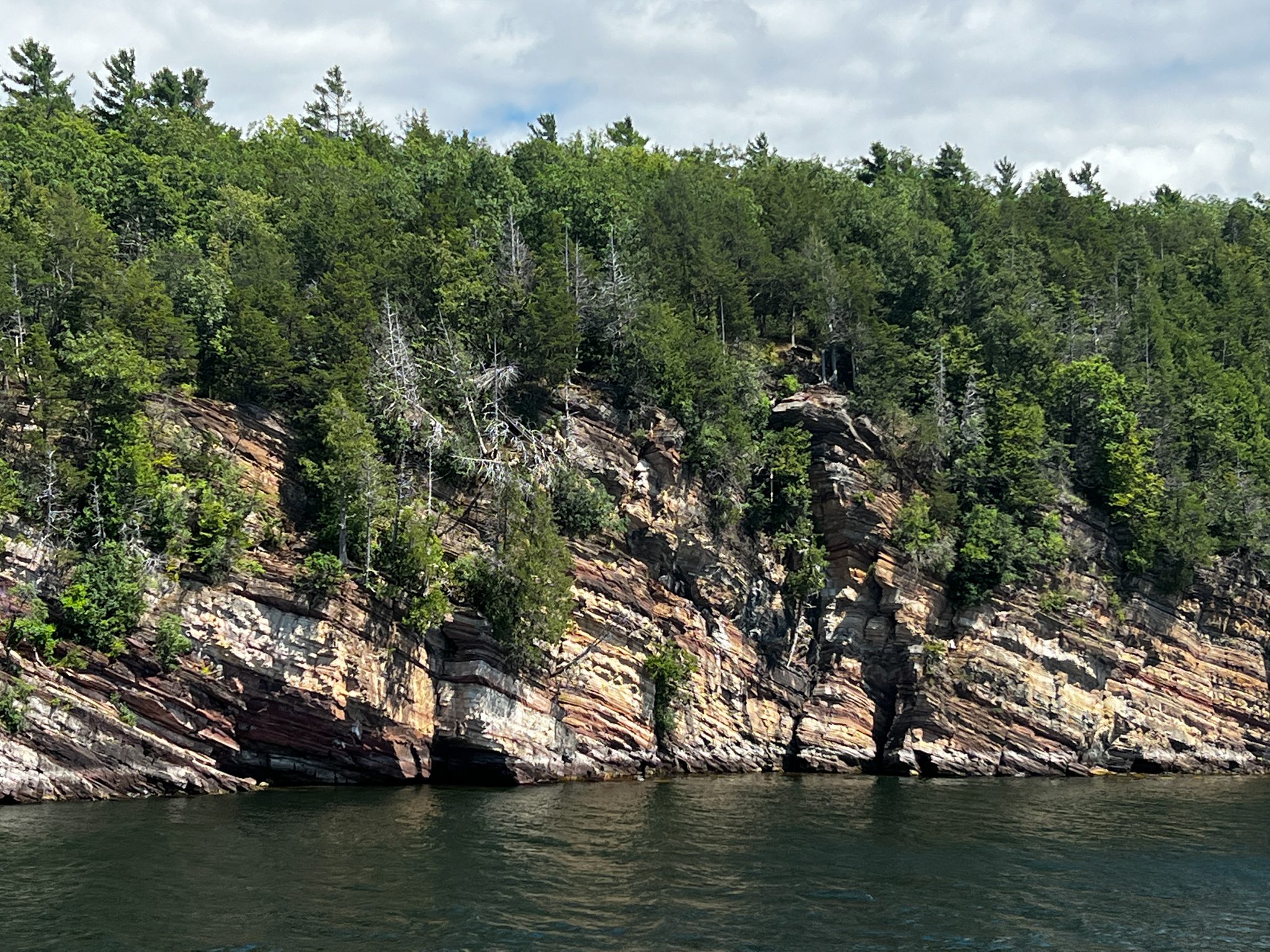 The other thing I really enjoyed on this cruise was the view of the Adirondack Mountains across the lake, on the New York side. I realized I haven’t explored them yet and that probably is something that needs to be rectified at some point. Another item added to my bucket list. 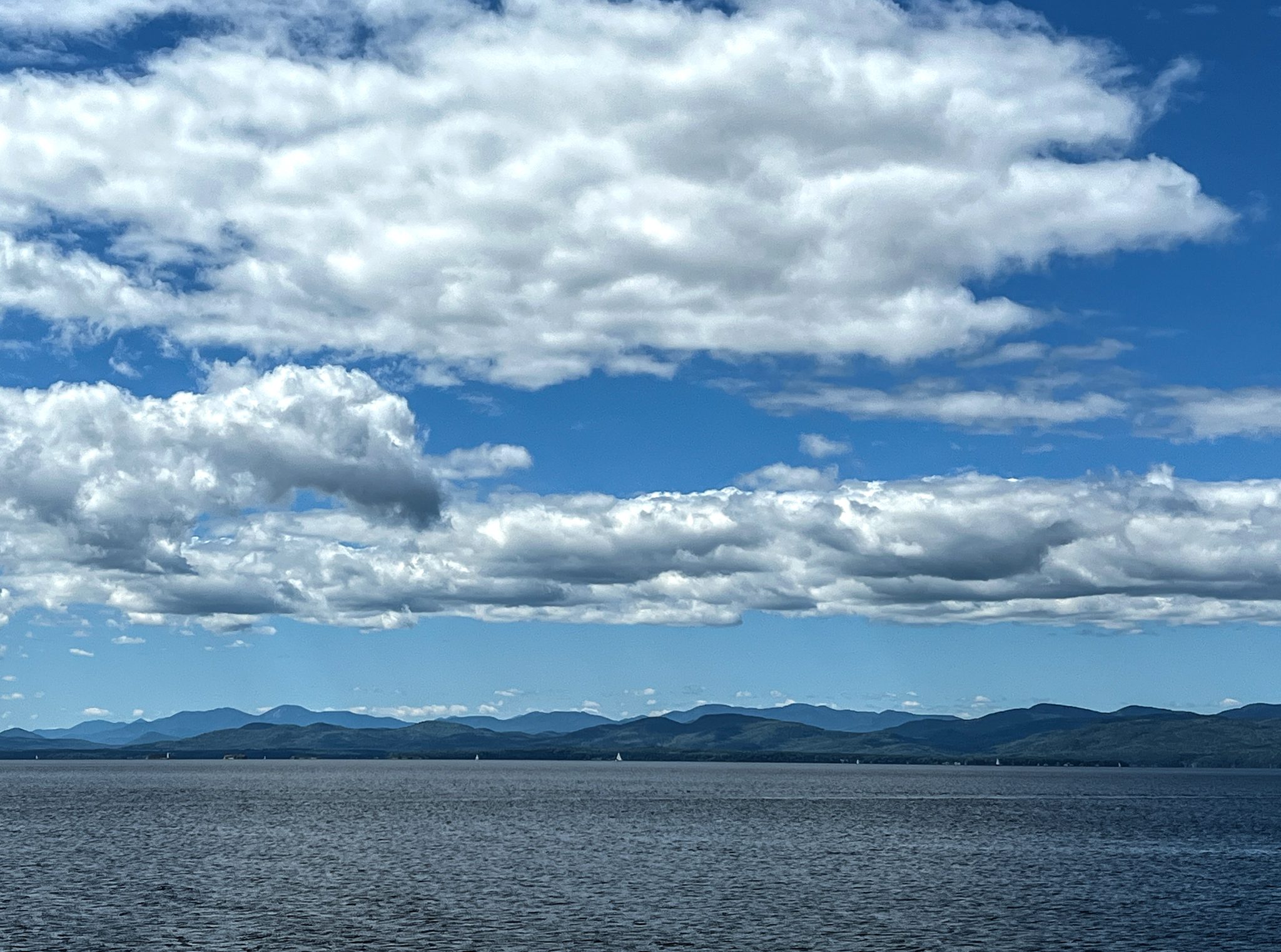 I’m happy I splurged on the cruise and got myself out onto the lake to experience this area from the water and see things I couldn’t have seen from land, like that Champlain Thrust stuff. If you’re interested, the boat was the Spirit of Ethan Allan and it docks at the foot of College Street in Burlington. Parking is easily found nearby, although you do have to pay by the hour, but it’s way cheaper than parking in Seattle or NYC.

Make your heart like a lake with a calm, still surface and great depths of kindness.