Since leaving Arkansas in early June, I’ve driven 99% back roads to get from place to place. From Missouri to Illinois, Kentucky to Indiana, and on to Ohio, it’s been a slow roll and scenic set of rides. And it is so much more relaxing for me to go 45-55 mph with no one in my rearview mirror much of the time. 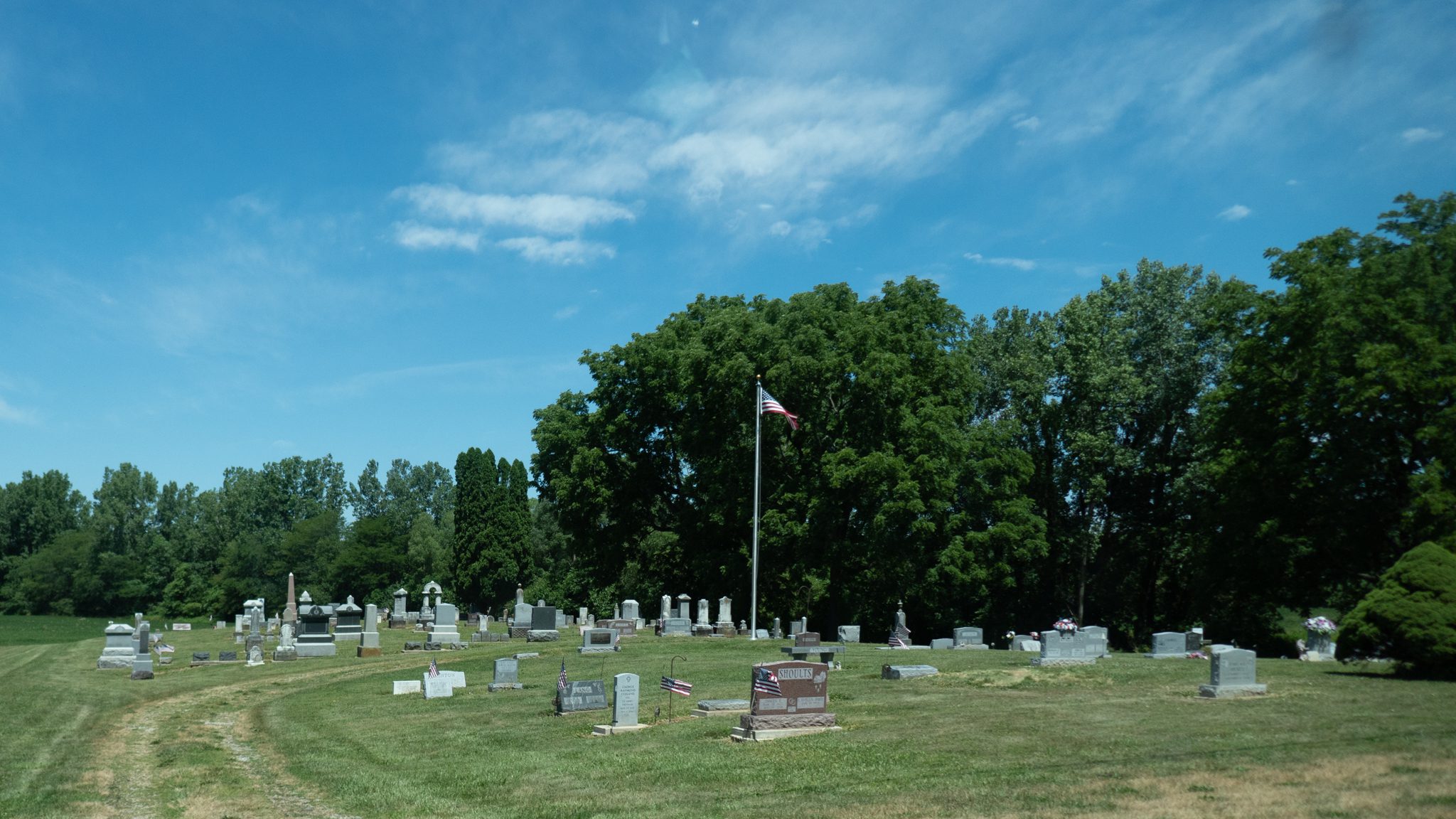 I don’t think I will ever get tired of seeing farm silos on the horizon. Each one is just a little different, there’s no standard design to them. Some are small, and some, like the one below, are seriously large and clearly support a huge farming enterprise. It’s definitely corn season in the midwest, and it’s been fun to see the corn shooting up from foot-high babies to four or five feet stalks in just a month or so. 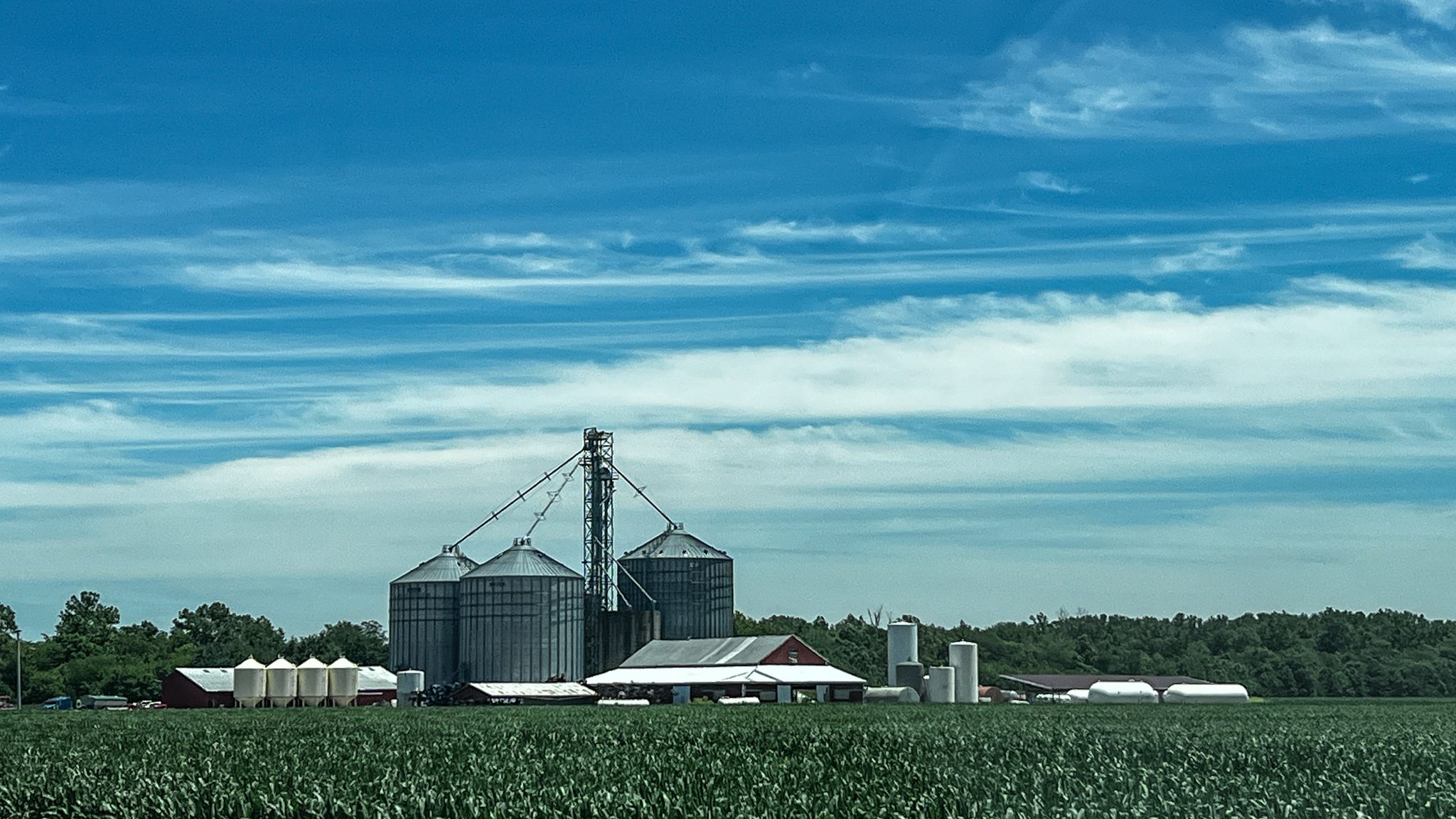 This one, on the corner of a small town in Ohio, was a pretty big operation. It made me wish they gave tours of the place so I could see what each of those silos is for and how it all works to move corn or grain or whatever from field to storage to trucks. Maybe it’s just me, but I think that would be a really fascinating behind-the-scenes look at how food is produced in America. 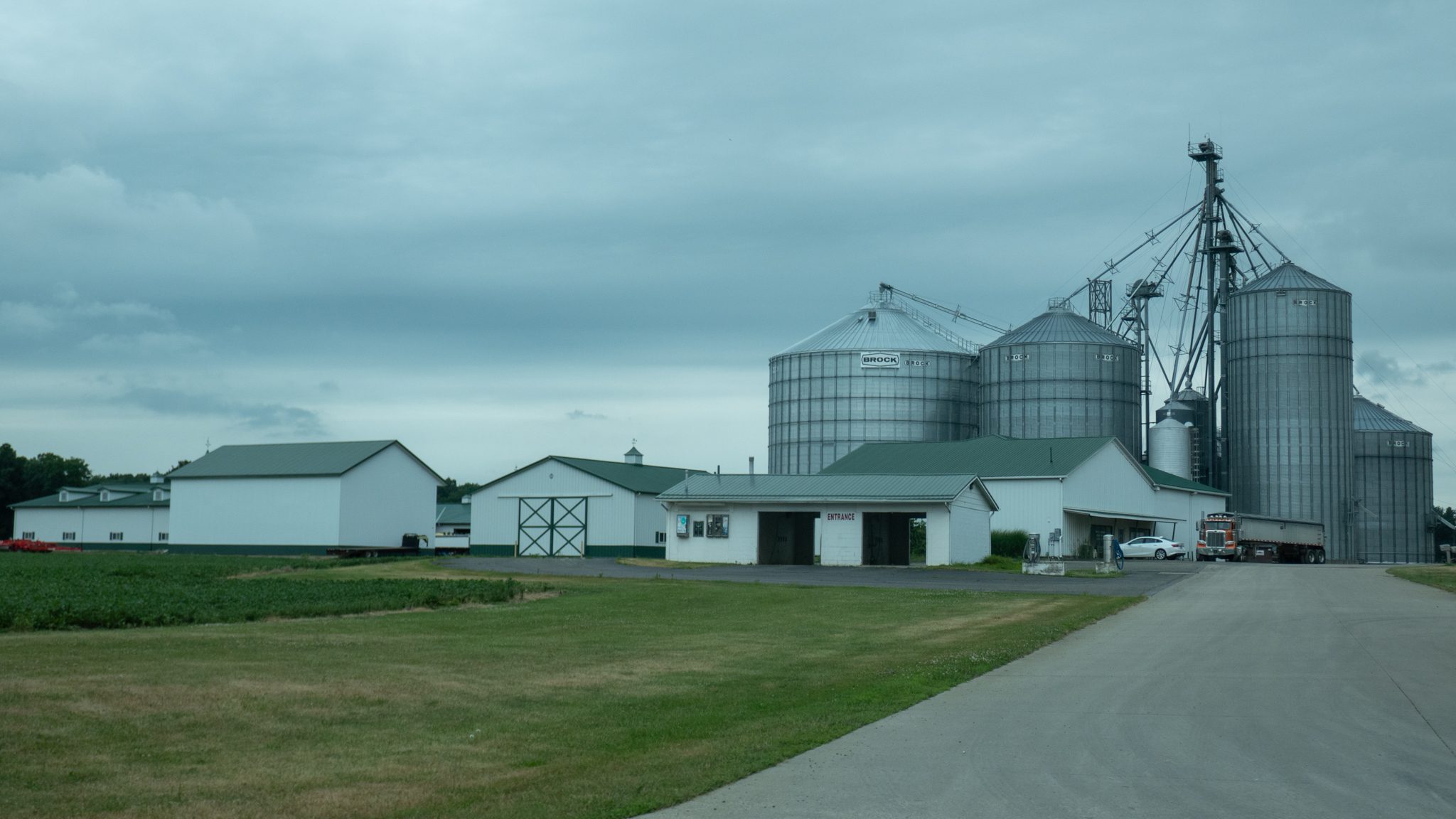 Even if you’re in a city, like Terre Haute, where this shot was taken, you’re bound to run into farm equipment. I still don’t know what this big-wheeled things are or what they do but you could honestly drive a sedan underneath it and not touch it. 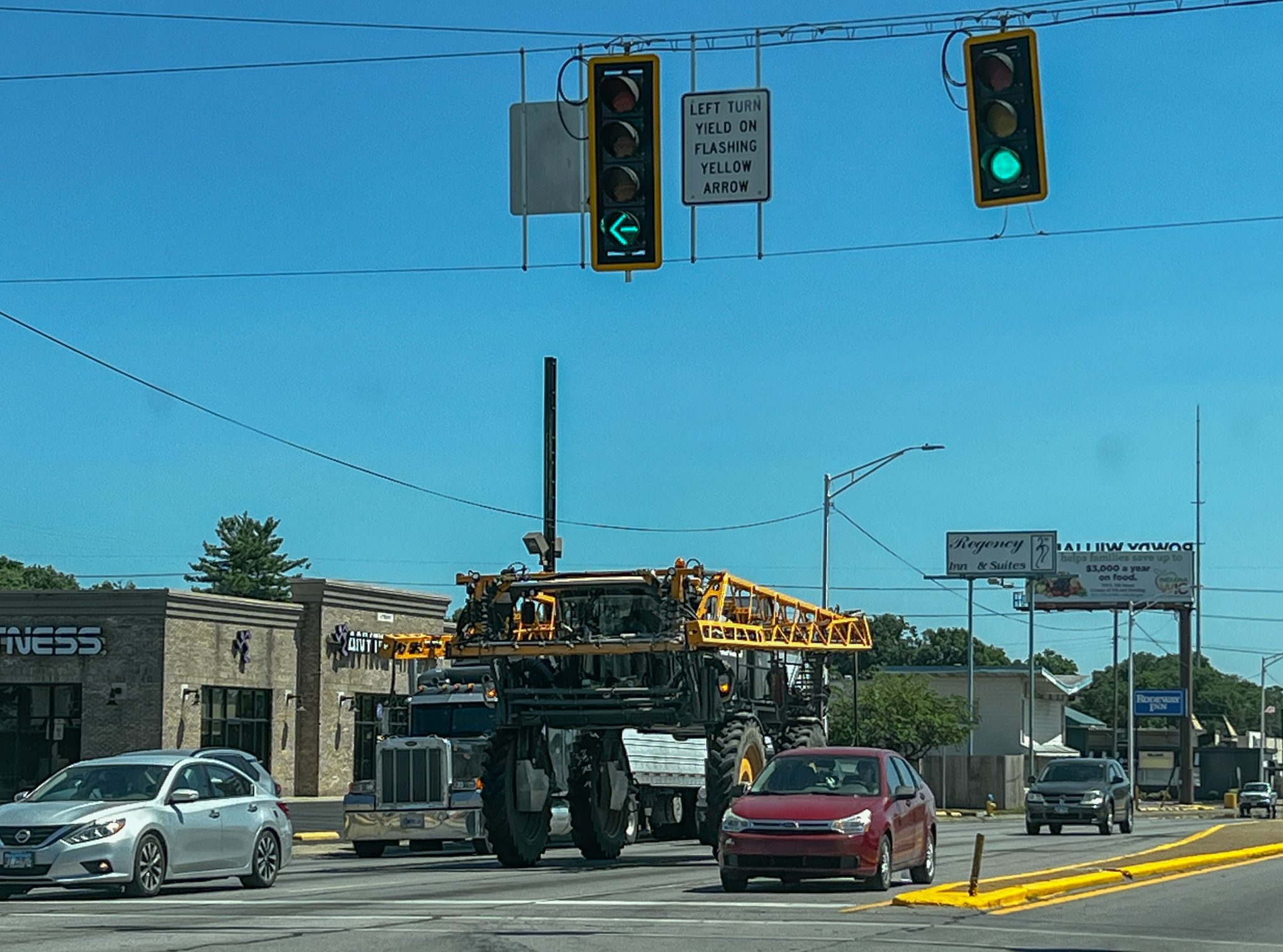 Stopping for gas just over the Ohio state line, I saw this little rig idling as its owner was in getting a sandwich. My guess is their farm must be pretty close by if they’re driving the little tractor to get lunch. If I ever had a tractor, I think I’d pick one like this, and not just because it’s blue. It’s just so cute, like a baby tractor. 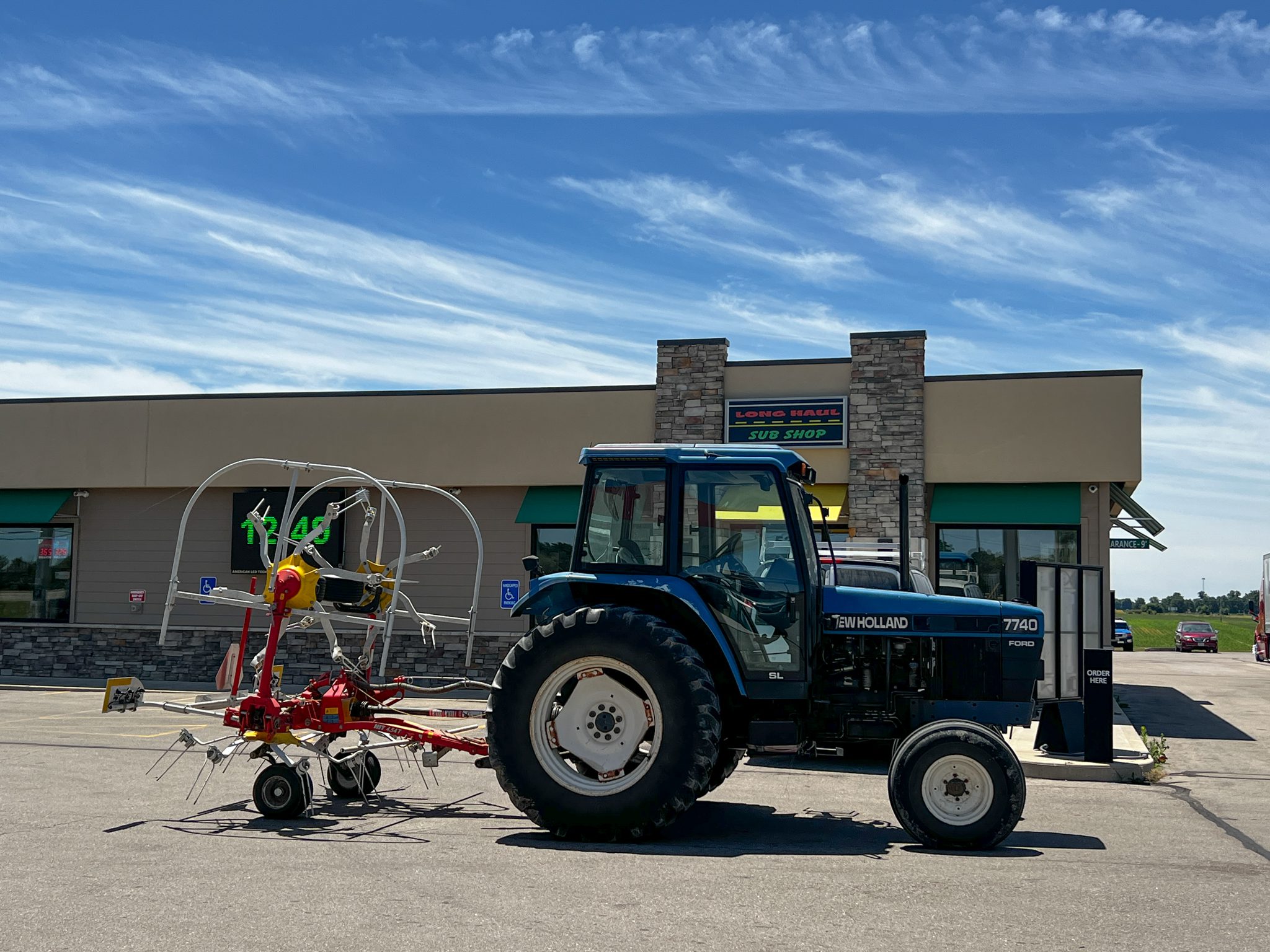 The downside to taking back roads is the painful realization that summer is road construction season in much of America. Here, the crew is hard at work repaving lanes on the west side of Indianapolis. 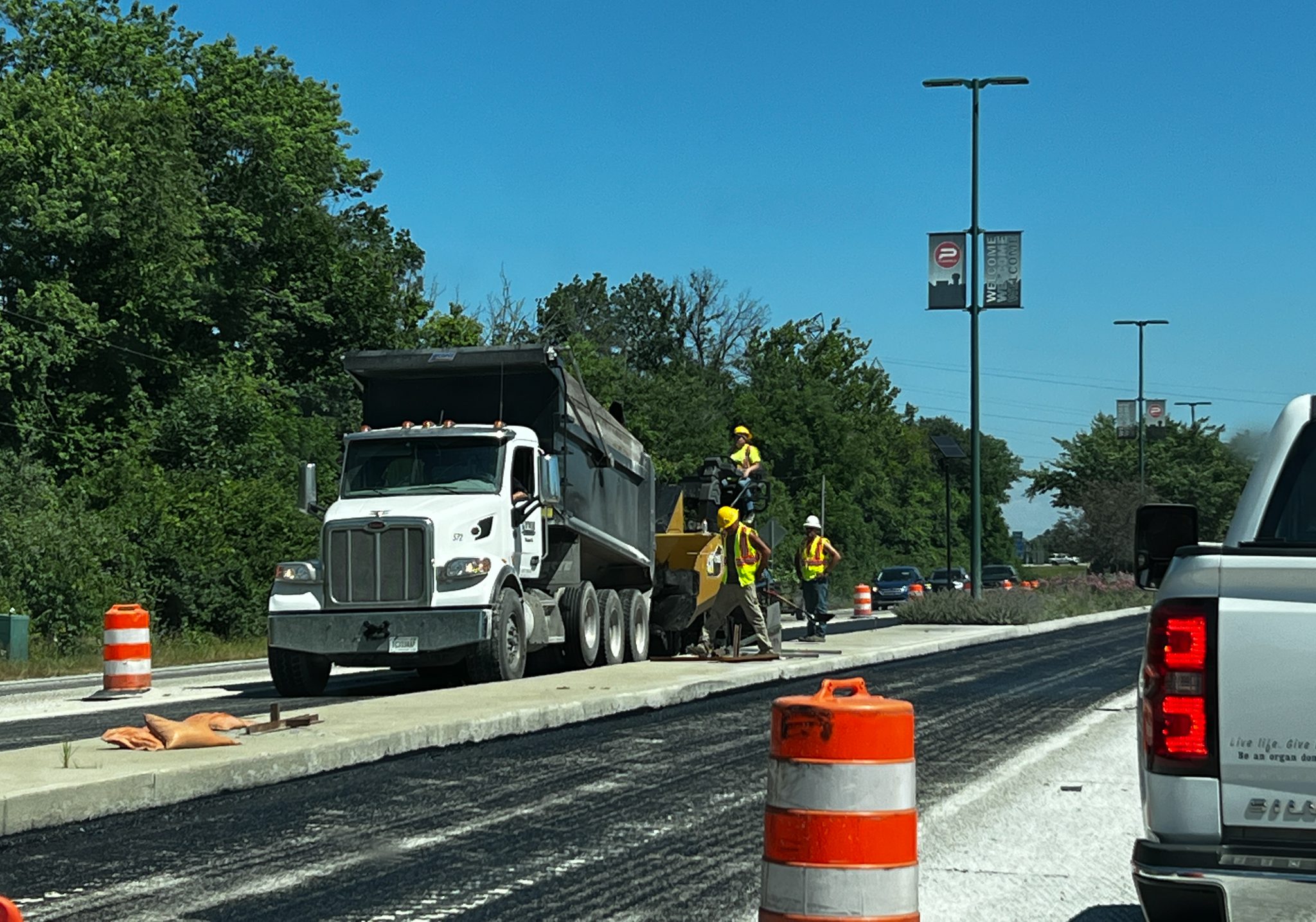 I was dead-stopped for about 10 minutes, just a mile away from meeting friends for lunch. I could literally see where I wanted to be, but I couldn’t get there because everything was waiting on something I couldn’t see ahead to get ouf of the way. Google Maps helpfully estimated my arrival time, which I texted along with this photo to my friends. I eventually got there at 11:45, instead of the 11:30 goal time. Oh, well, we’re all retired, so it didn’t matter much 🙂 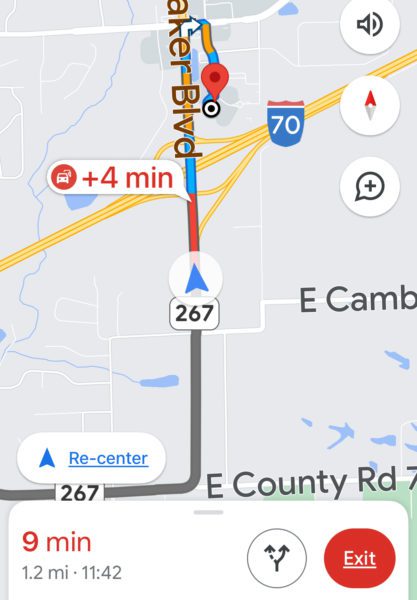 Wherever you go in rural America, there are dollar stores. Say what you will about Amazon and Walmart destroying the downtown stores (and they have definitely factored in that), the dollar stores have also played a big part in the hollowing out of the mom-and-pop grocery stores and five-and-dime stores that I remember from when I was a kid. 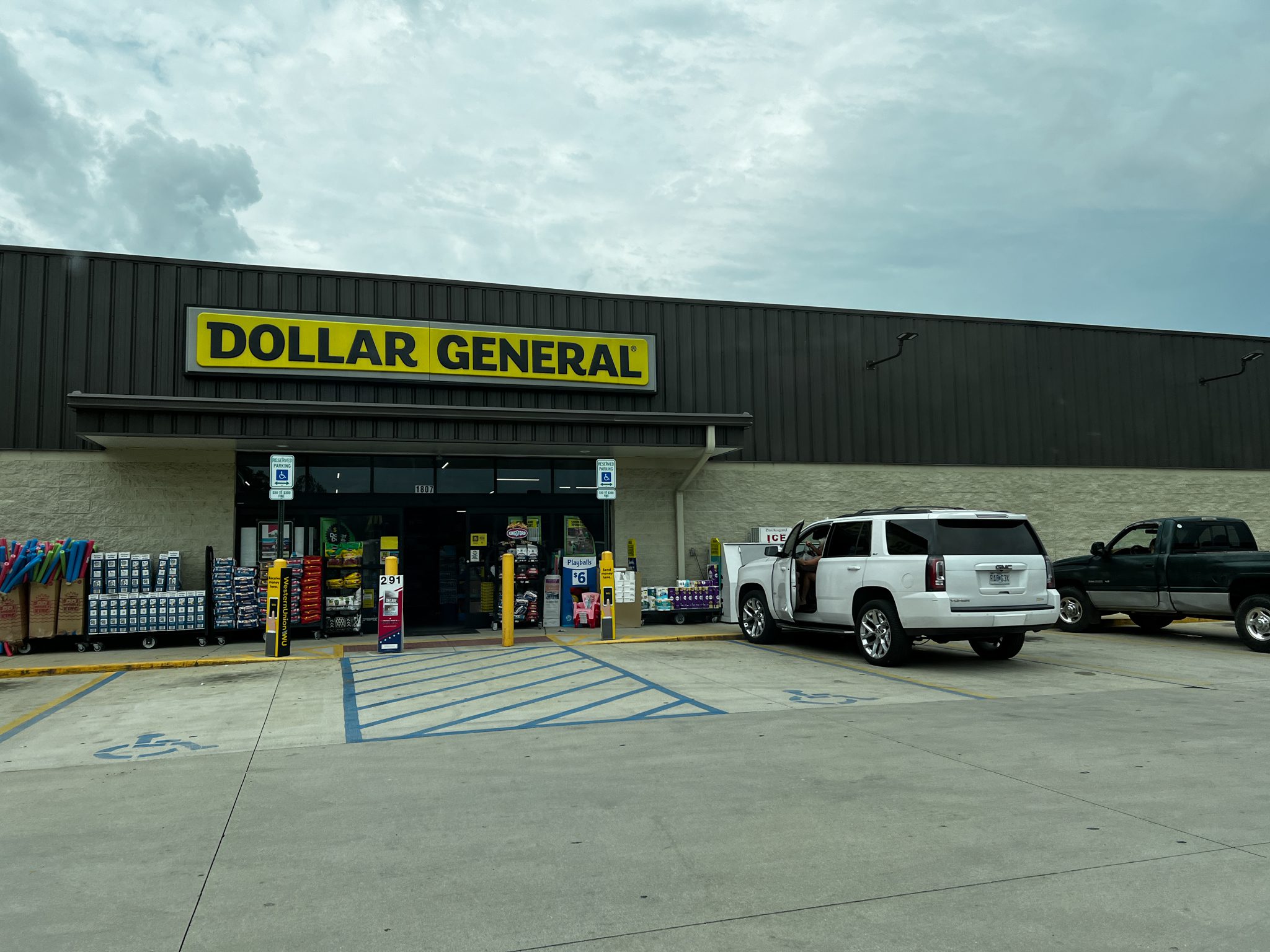 Very small towns will have a single dollar store, while bigger ones might be supporting two of them. Big Spring, Missouri, supports three, the Dollar General above and a Family Dollar + Dollar Tree pair just a mile down the road. I’m no expert, but I’ve shopped at Dollar General enough to know things cost more than a dollar there, while at Dollar Tree, almost everything in the store literally costs a buck. 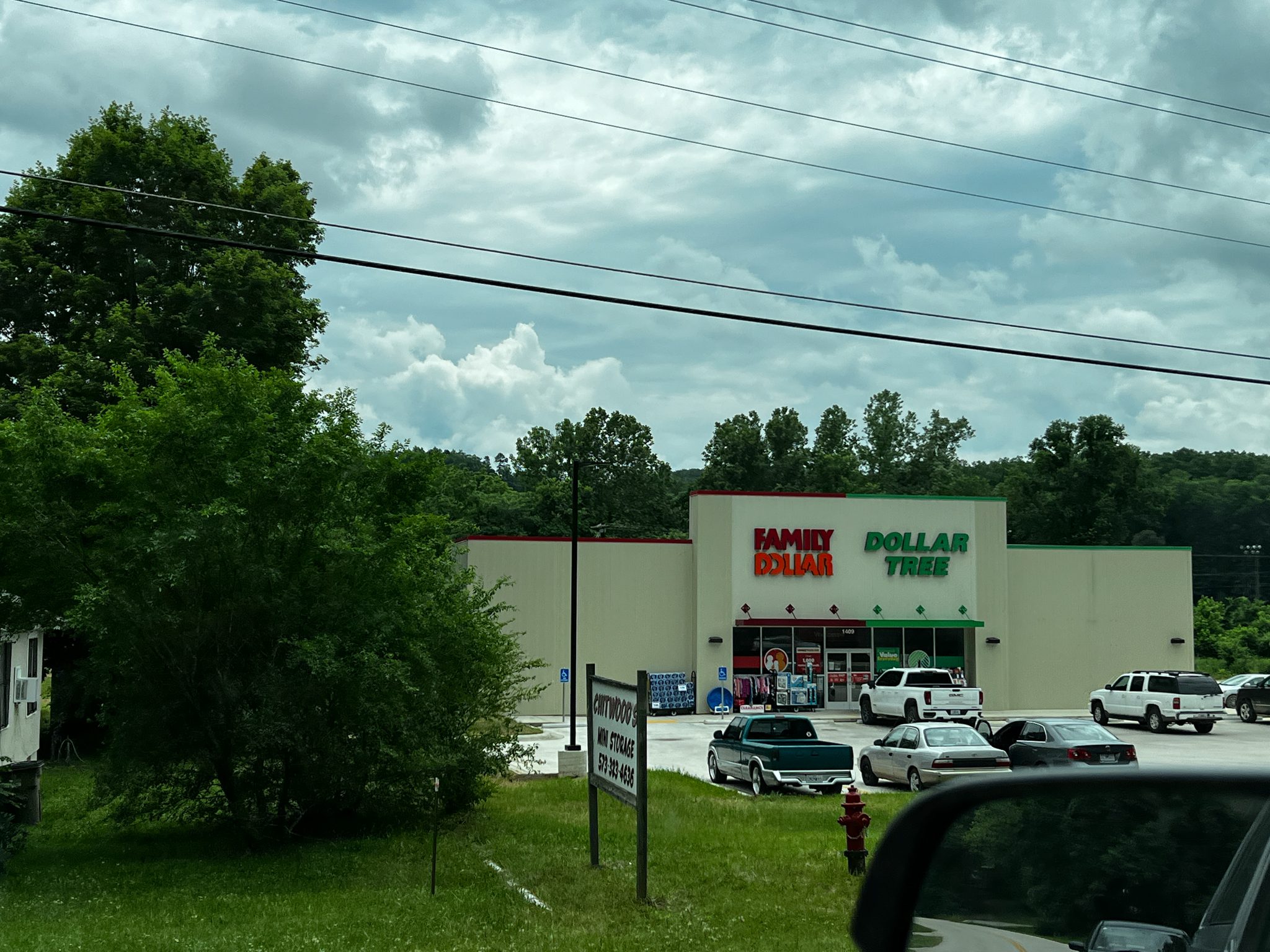 Dollar Tree operates over 15,000 stores in the US and its subsidiary, Family Dollar, has about 8,000 stores, while Dollar General runs over 18,000 stores. In rural areas, the dollar store is sometimes the only place to buy things like toilet paper or canned goods (with few exceptions, they don’t sell fresh produce or meat), and the prices often reflect that they know they’re the only game in town. For rural residents, the dollar store saves them a longer, more expensive trip to Walmart or Krogers, which can be 30-50 miles one way. Every time I drive through a small town and see an abandoned grocery store or a Main Street with boarded up storefronts, I know I’ll see at least one dollar store close by. It’s the underbelly of the current American economy, one you don’t see unless you drive the back roads.

If there’s a defining symbol of America in 2022, it may just be a bargain-hunter scouring the aisles of a Dollar General in Olive Hill, Kentucky.