The southwestern desert is a vast expanse, whether you’re driving through it, hiking its myriad trails, or simply staring out across the distances for miles and miles. I did a lot of that last one my first week at Organ Pipe Cactus National Monument. And then serendipity brought me to a little shop in Ajo where a photographer had a case of lenses for sale. Sitting there on a shelf, calling my name was a beautiful old Minolta lens, a 100mm sibling to the 58mm lens I had inherited from my Dad several years ago. 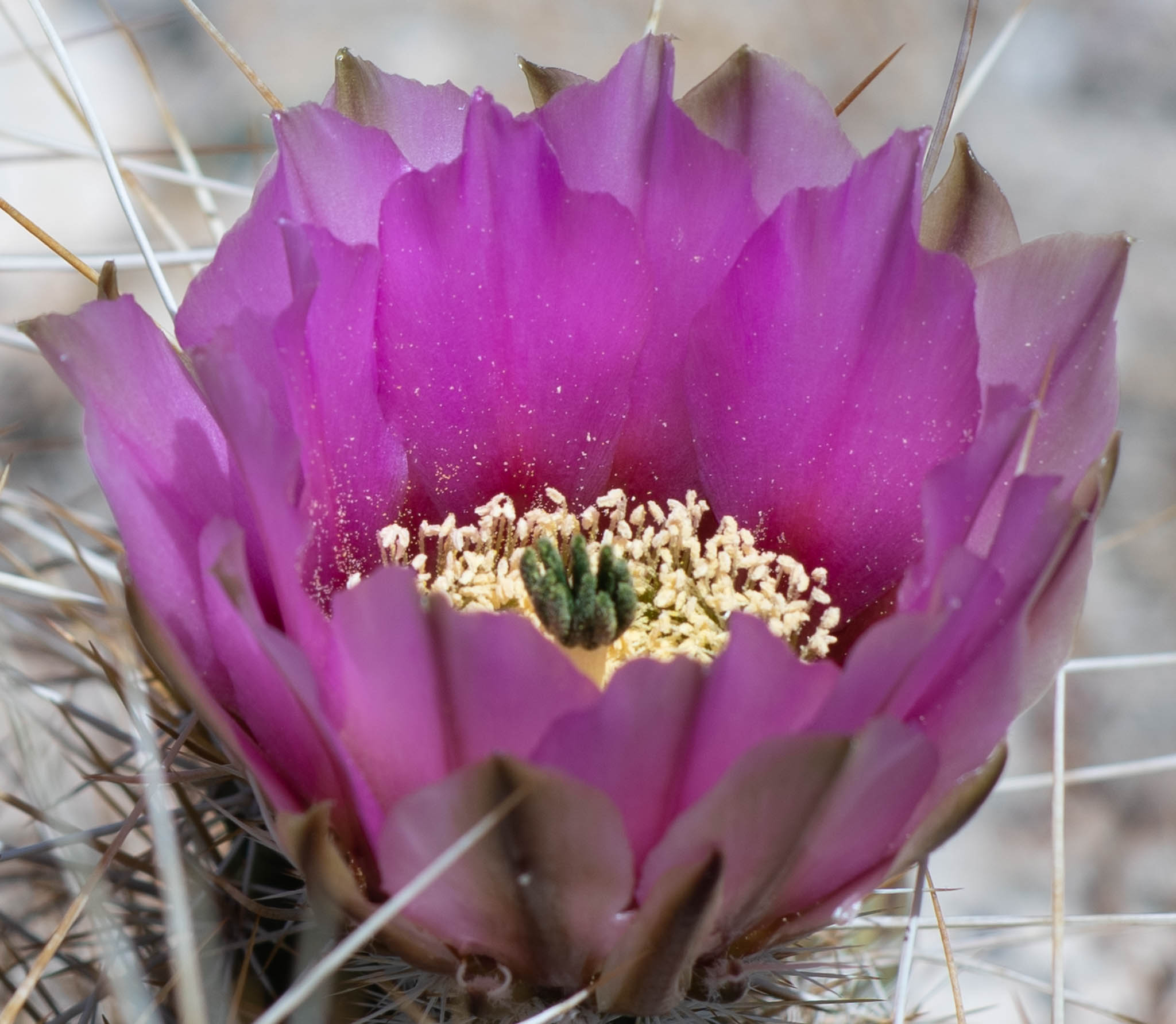 It will be a big learning curve to get good images with this lens but that purple bloom was a good start. Over three days, I practiced with f-stops and ISOs and focus lengths till I was mostly satisfied with this image. I think I’ll need the tripod to get really tack-sharp photos but it will be worth the effort. 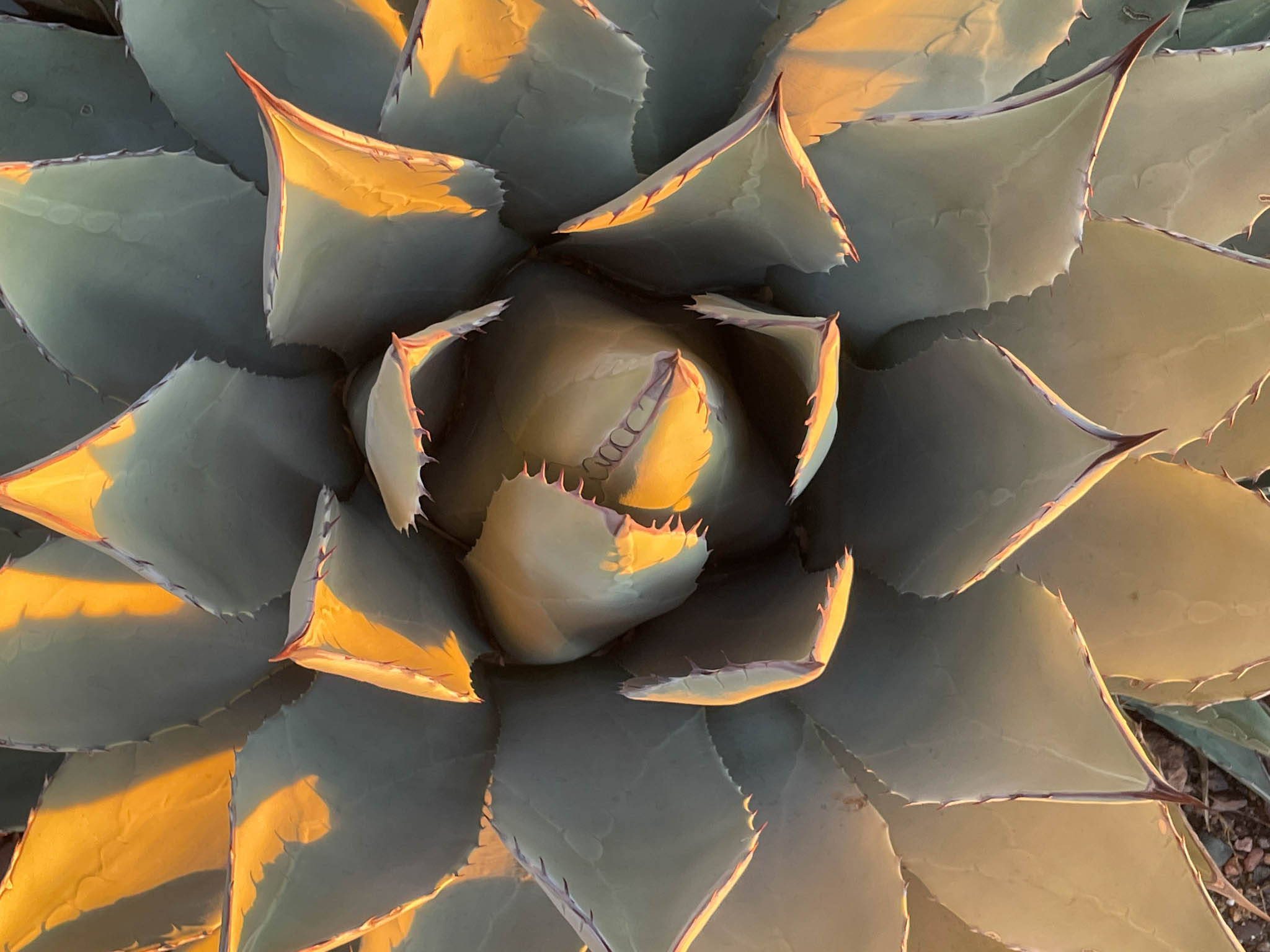 This one was a late evening shot, very close-up using an iPhone 12. There’s something about the way that center hasn’t yet unfolded that captured my eye. 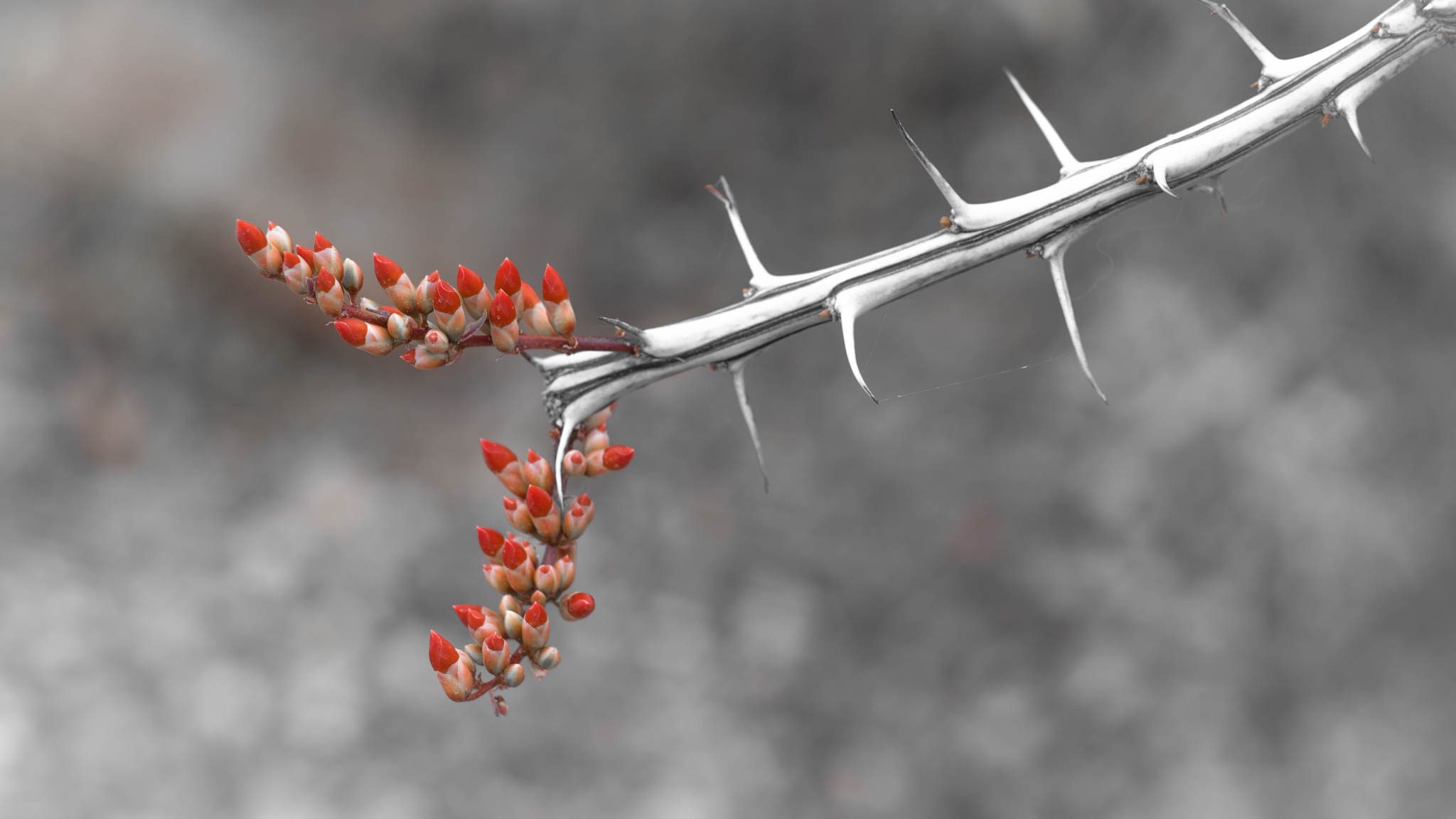 During my time at Organ Pipe, the ocotillos blossomed, rioutous red things at the end of spiky sharp branches. The contrast was too much to pass up. I probably took a hundred photos or more of ocotillo blooms trying to capture their essence. The cover photo to this post is a close-up of a fully-blooming ocotillo. 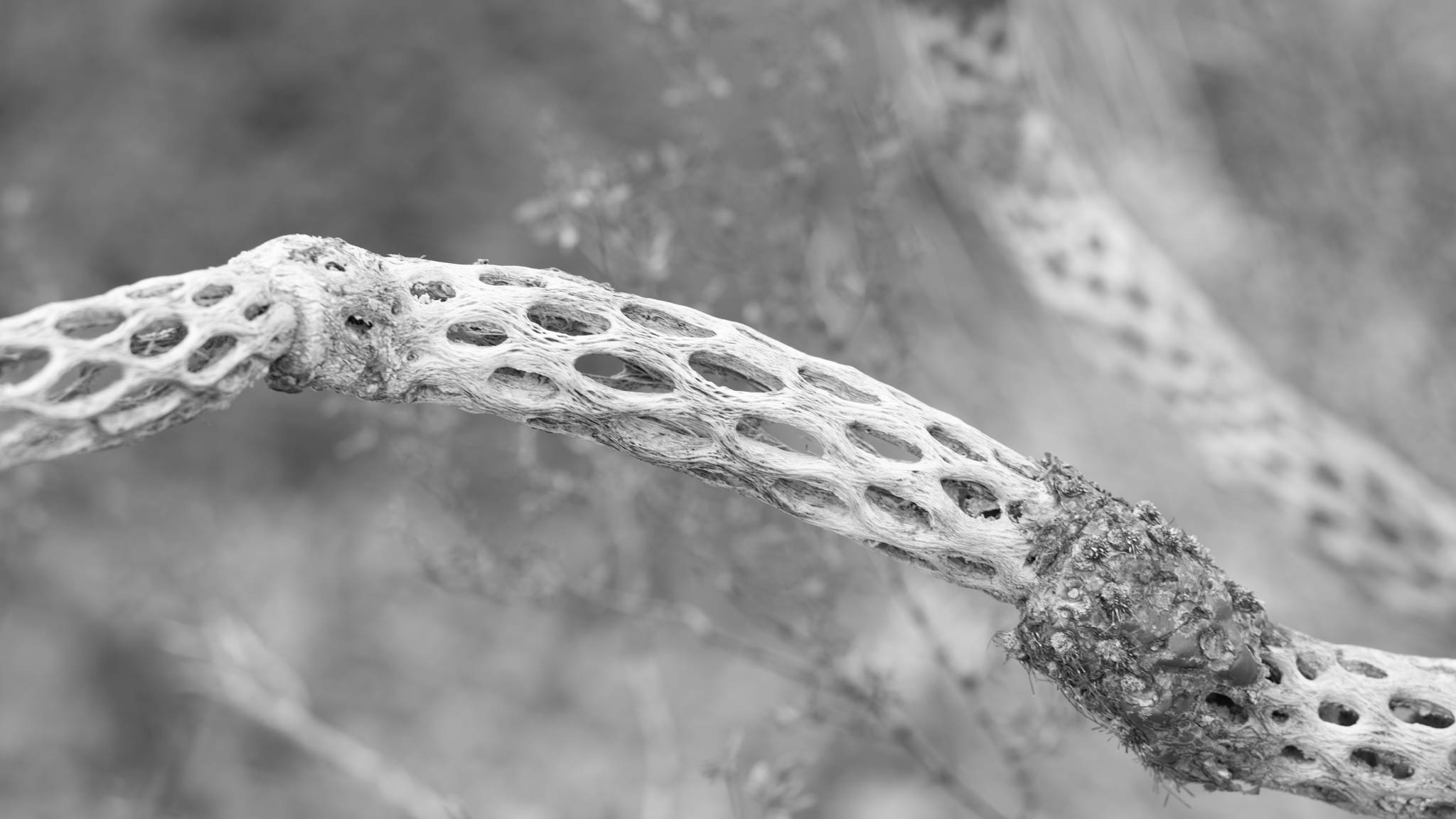 This skeleton of a cactus branch was so lovely that I had to try it with my new lens. The bokeh (out of focus background) is just creamy delicious with this lens, much like the other Minolta lens I have. Both of them are heavy glass, circa 1970s, when cameras were SLRs and nothing was digitized. Using either one is all manual, so I’m going back to basics to figure out how best to use them. 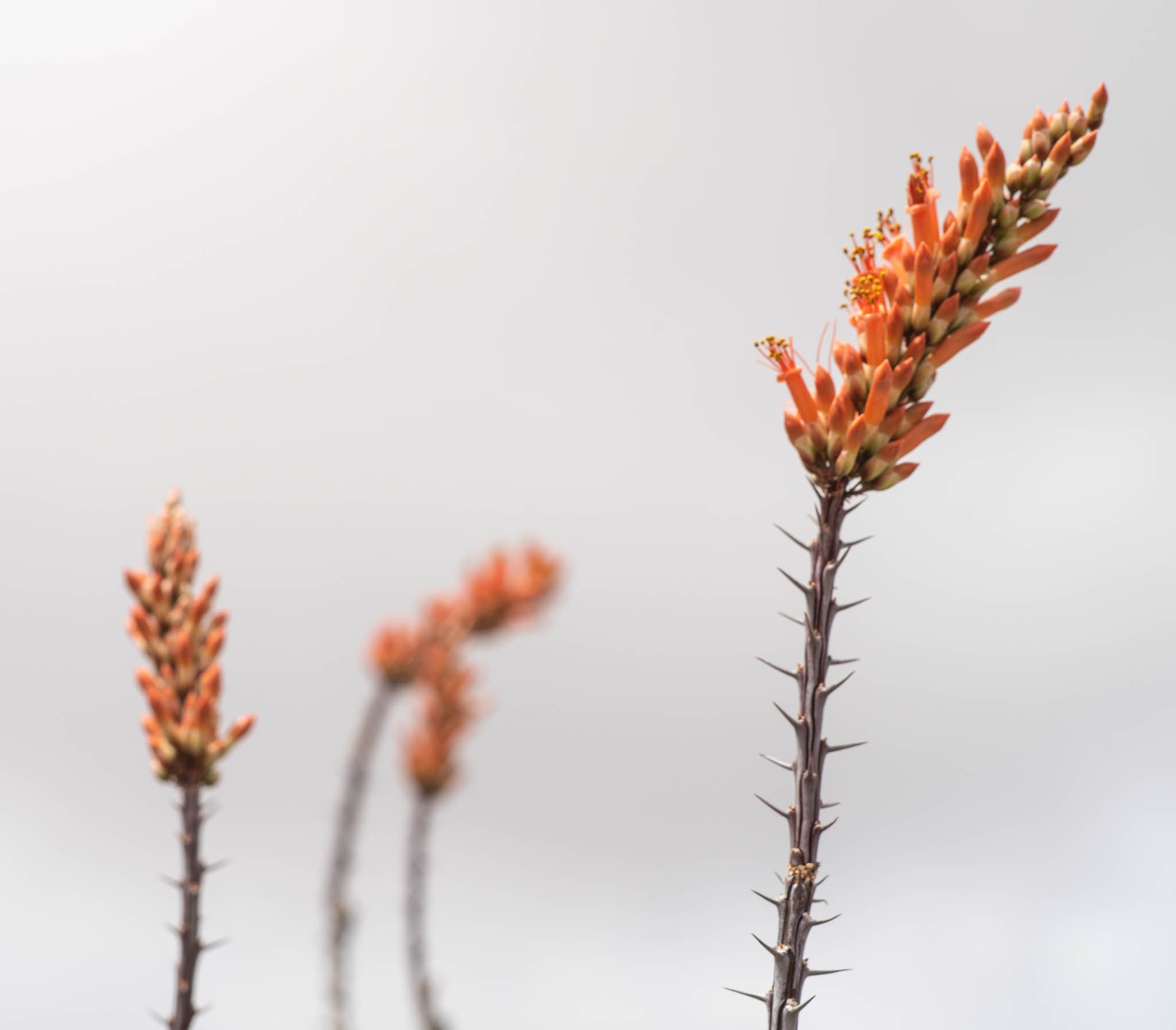 I’ll close this post out with another ocotillo image, taken with the Minolta 100mm lens. It was so hot when I found this three-bloom shot, so I didn’t spend a lot of time on it, but I still like how it came out.

Nothing like a new (old) lens to inspire a different way of looking at the world. Or the desert.

Those who contemplate the beauty of the earth find reserves of strength that will endure as long as life lasts.