I’d driven all over New Mexico, except for the eastern plains, sometimes called the high plains. If they didn’t post state line signs, you’d think you were in west Texas already. But you’re not… 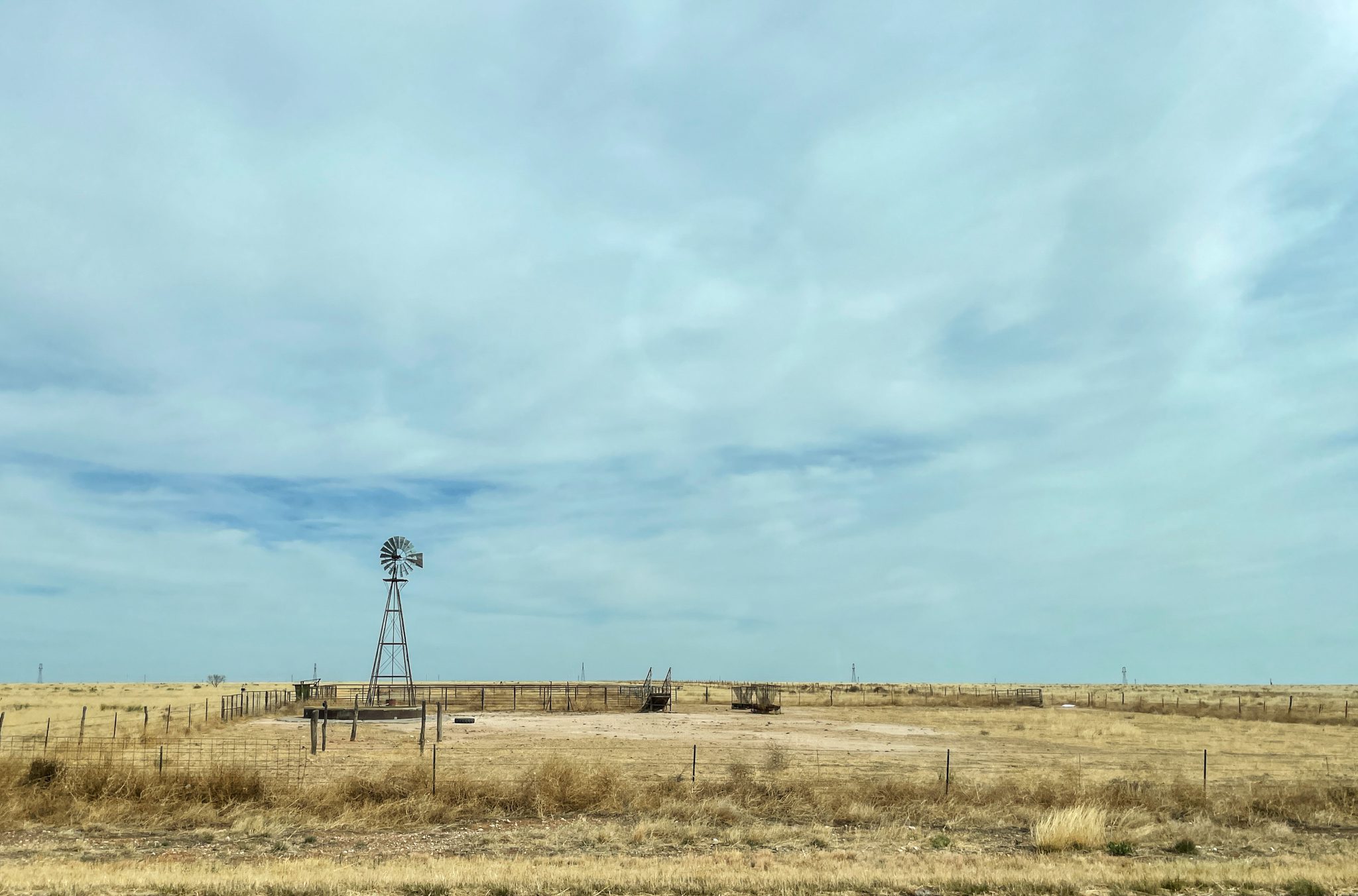 Heading out of Taos, I went south to Santa Fe and then east on I-40 to dodge the fires, making what would have been 130 miles into a 185-mile day. I made it to Santa Rosa and the state park about 8 miles out of town, and was happy to get out and stretch my legs a bit taking a walk on part of the shoreline trail.

Only thing was, the trail is no longer anywhere near the actual shoreline. The reservoir must be a historical low, or close to it. Where I stood to take this photo had clearly been underwater as part of the lake many years ago, but it had dried out long enough for the vegetation to start taking hold again and I could see “islands” of land in the middle of the lake, long-drowned but now emerging in these drought conditions. Looking out across all that exposed shoreline, I couldn’t help but think the western drought will be haunting people for decades to come. There are no easy answers or obvious solutions. 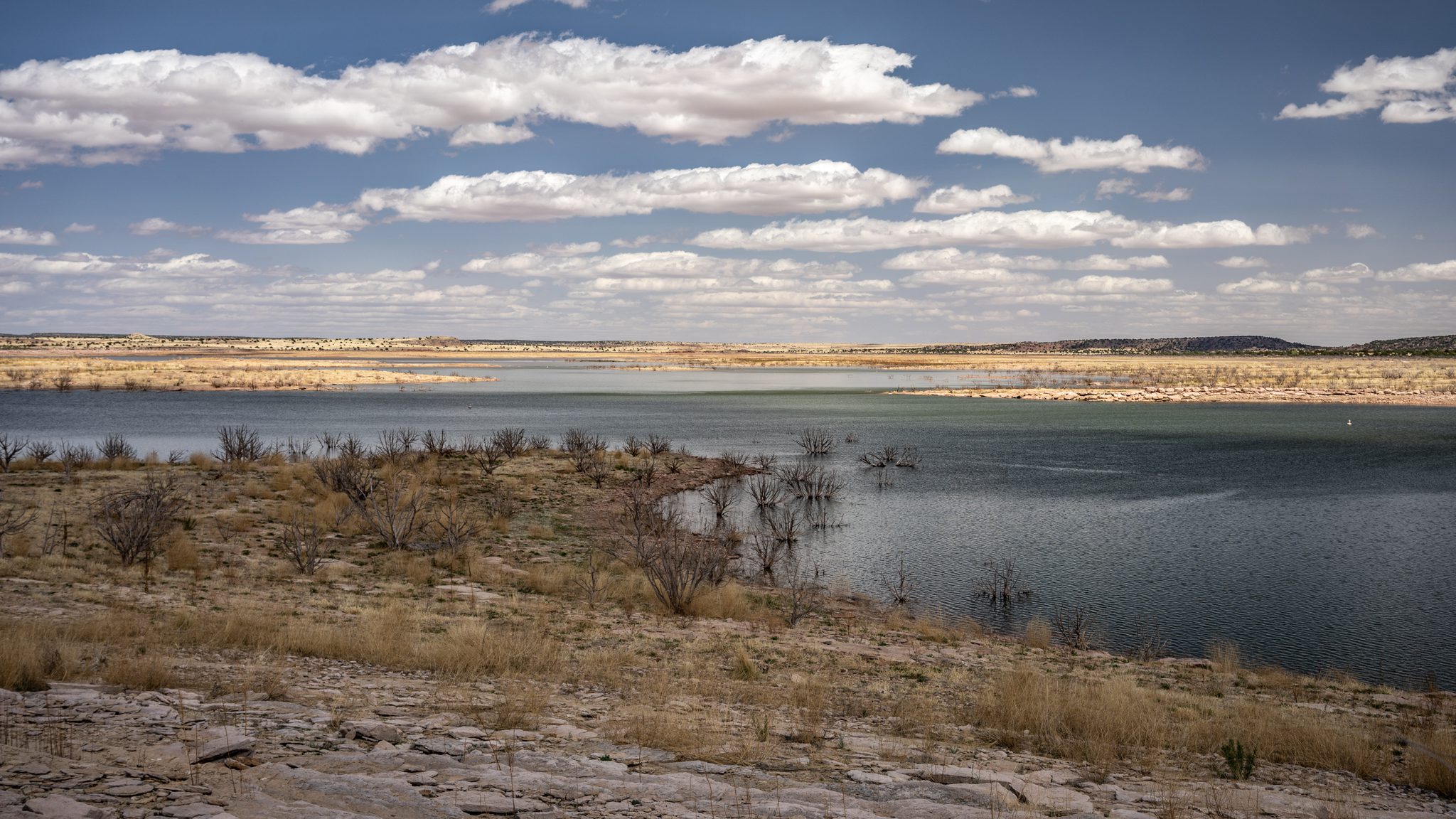 It was a melancholy experience to drive Route 66 through the small town of Santa Rosa. Old motels, faded signs, boarded up restaurants, an abandoned truck terminal – all such heartbreaking signs that progress, and the desire to drive 75 miles an hour, has passed Santa Rosa by. This classic 1950s gas station is close to two modern truckstops but there’s no place for it today. Those 18-wheelers and RVs the size of buses want lots of gas pumps, quick, cheap food to go, easy on and off of the highway. A local gas station with two bays for servicing cars and a little office for selling parts is an anachronism. For a short while, back in the early 1970s, my dad owned a gas station like this and it makes me sad that this one didn’t survive either. 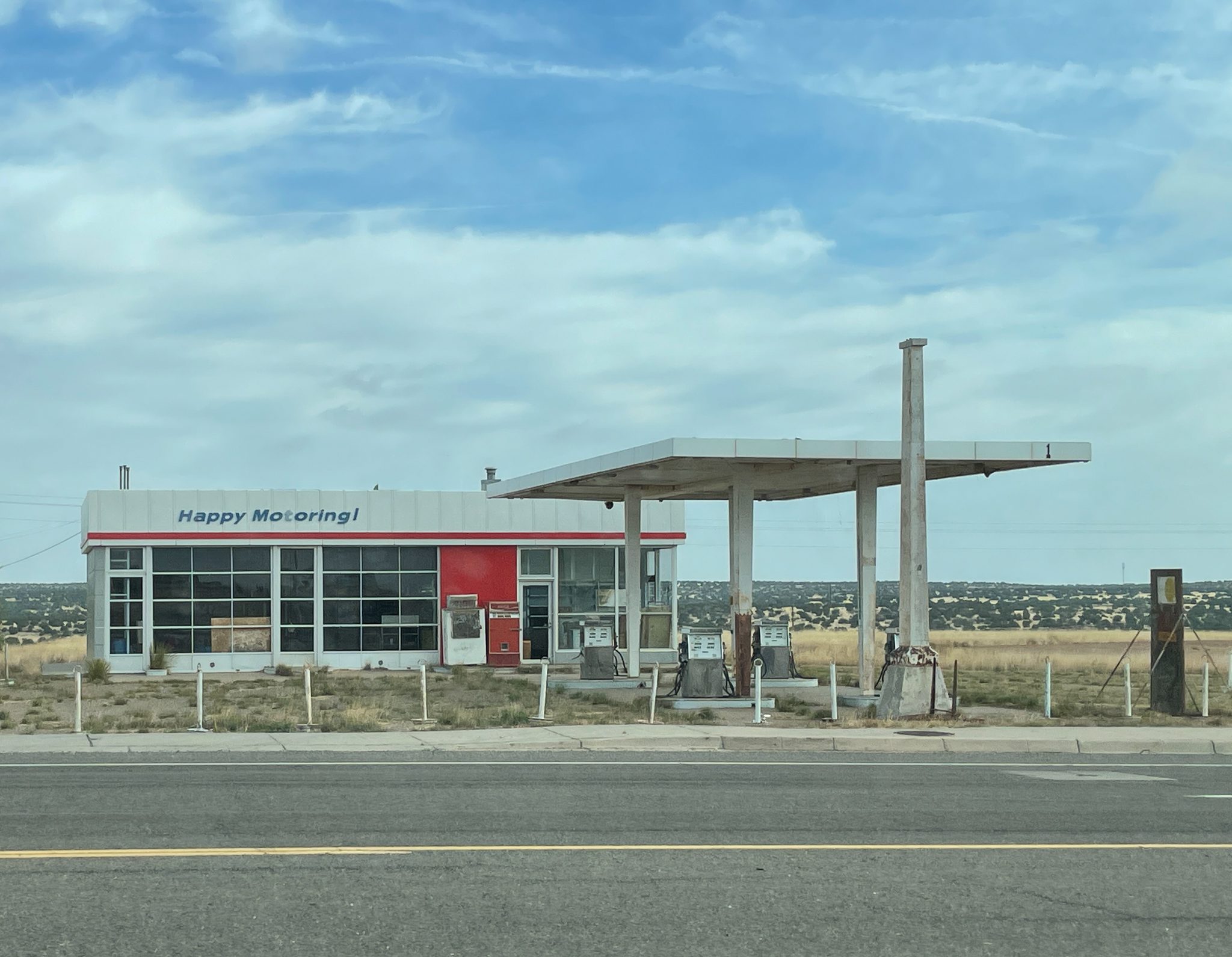 When I left Santa Rosa, I again headed south and then east, this time to stay off I-40 and enjoy the sparse beauty of the back roads. I found it that special kind of beauty all over routes 84 (south) and 60 (east). The clouds came and went, the sky shifting from blue to grey and back to blue as the light winds played with the clouds. 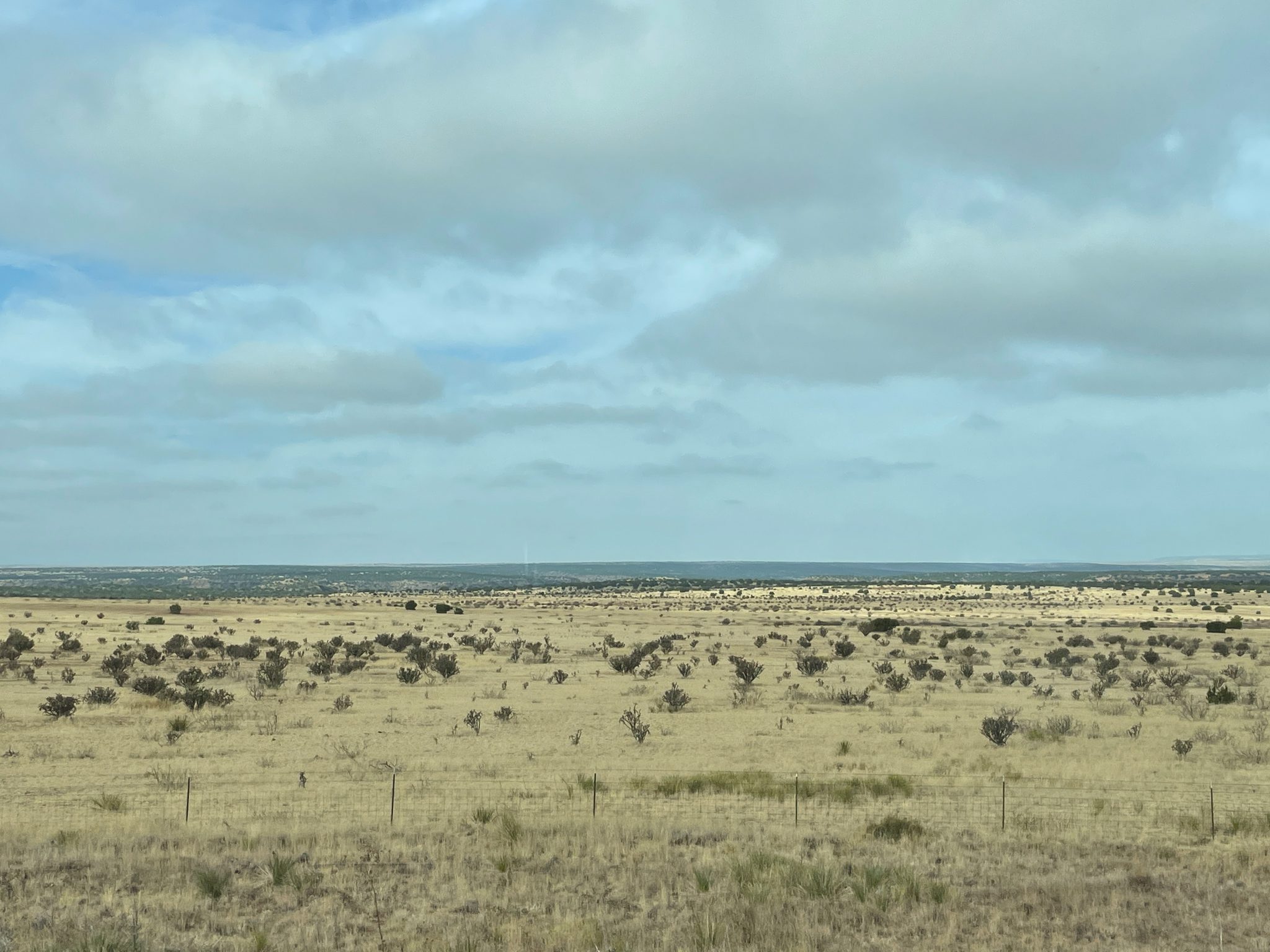 Sky and land, land and sky: there’s not much else out here unless you count the telephone poles and the occasional microwave tower. I liked it though, it gave me time to think as I drove and I always like that. I thought a lot about broke-down towns, abandoned ranches, and the wide open spaces around me. What will happen to these places in the next twenty or fifty years? The plains might stay the same, I suppose, but the towns will most likely disappear as the last of the old-timers die off and there aren’t enough people left to keep things going. 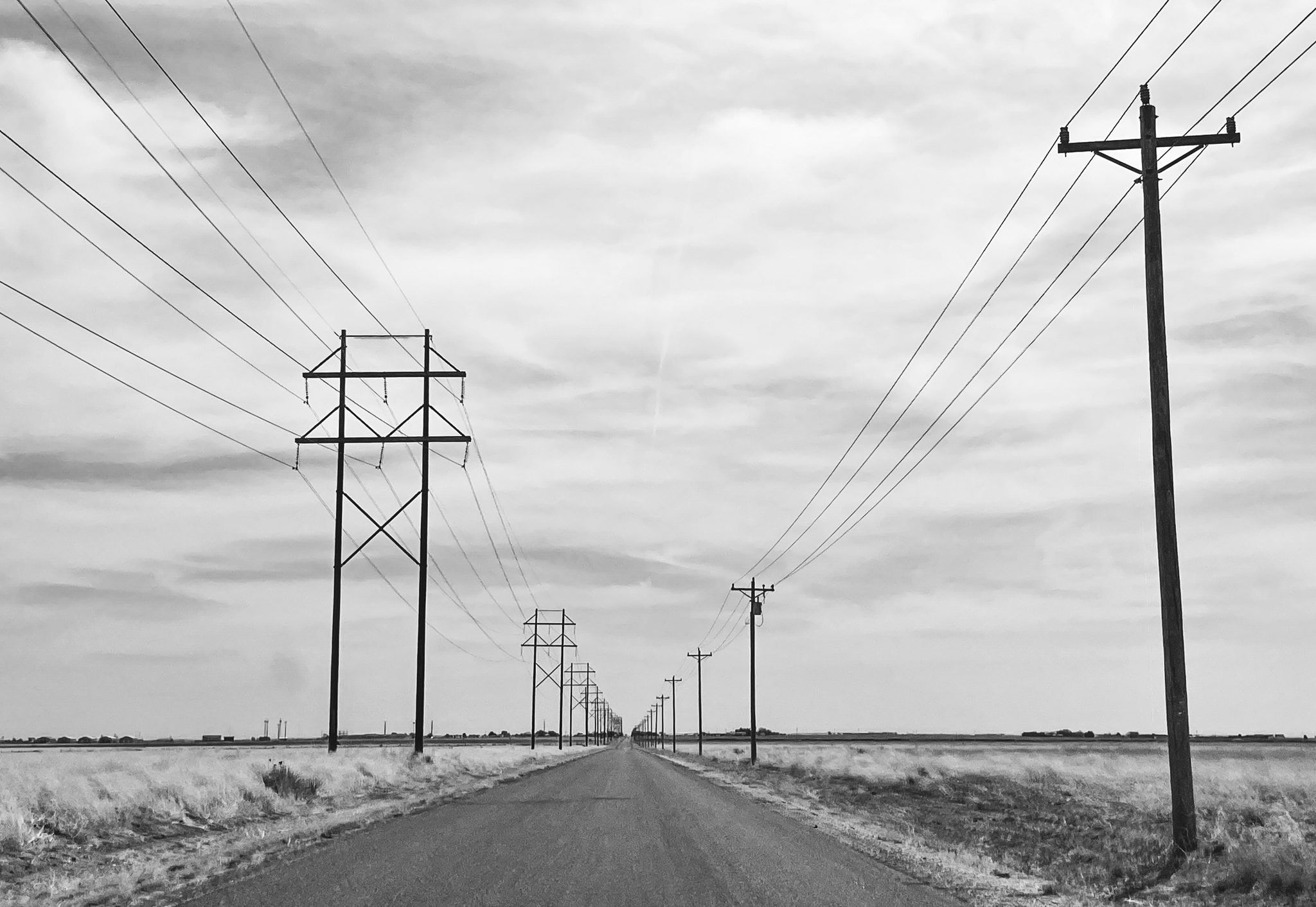 The Oasis at Portales

After 120 miles of back roads and flat plains, I drove into Oasis State Park, near Portales, NM, for a one-night stop. It was definitely an oasis for my eyes. Just look at those big, leafy green trees! 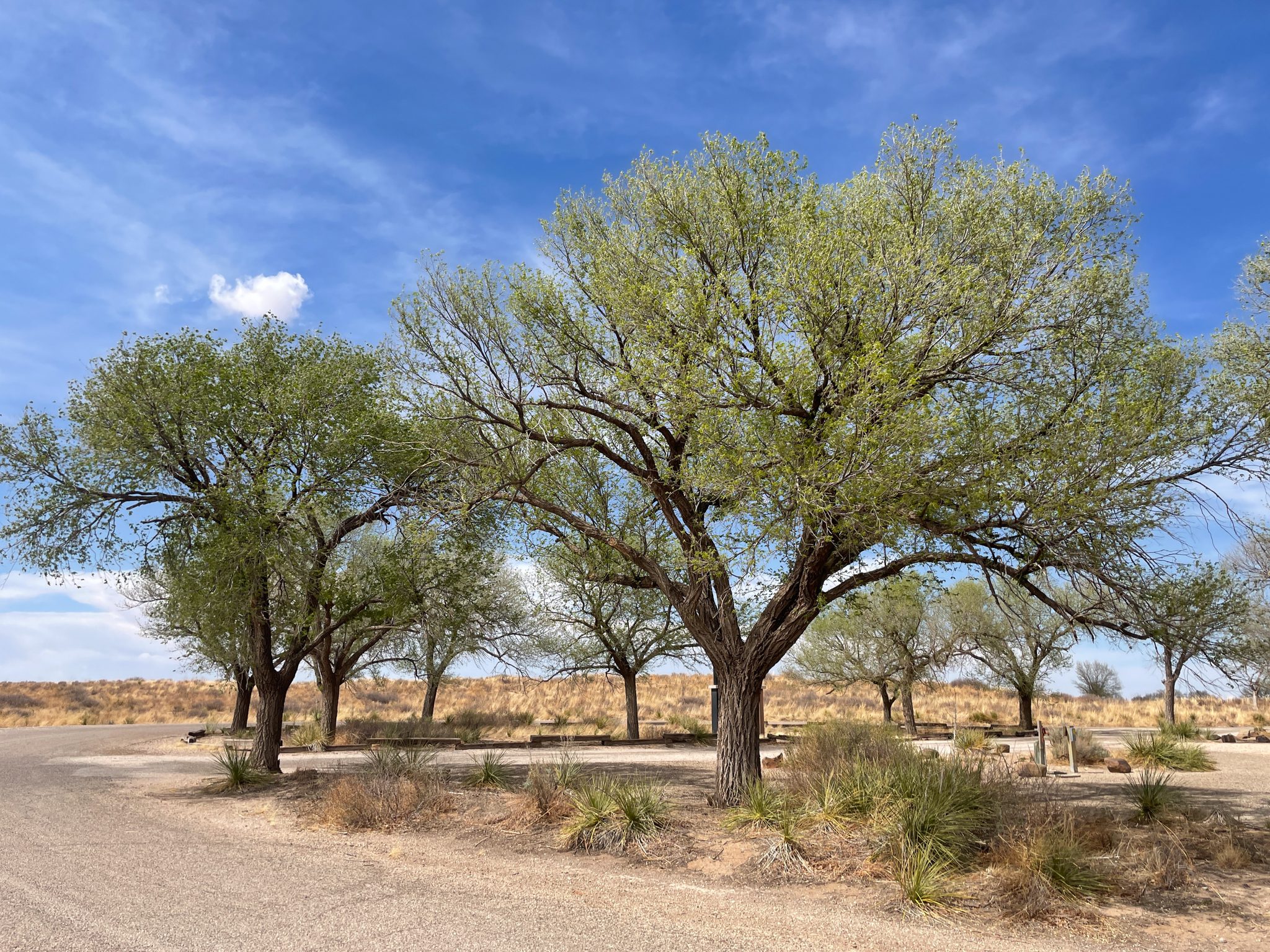 I walked the campground loop enjoying the greenery and also checking out the plains just outside the loop. This tree, and the little bird playing “king of the hill” caught my eye. For the photographers in the audience, this image was taken with an Apple 12 and zero post-processing. The scene looked just like that. The second I snapped the shot, that bird flew away so no second chances for this view. 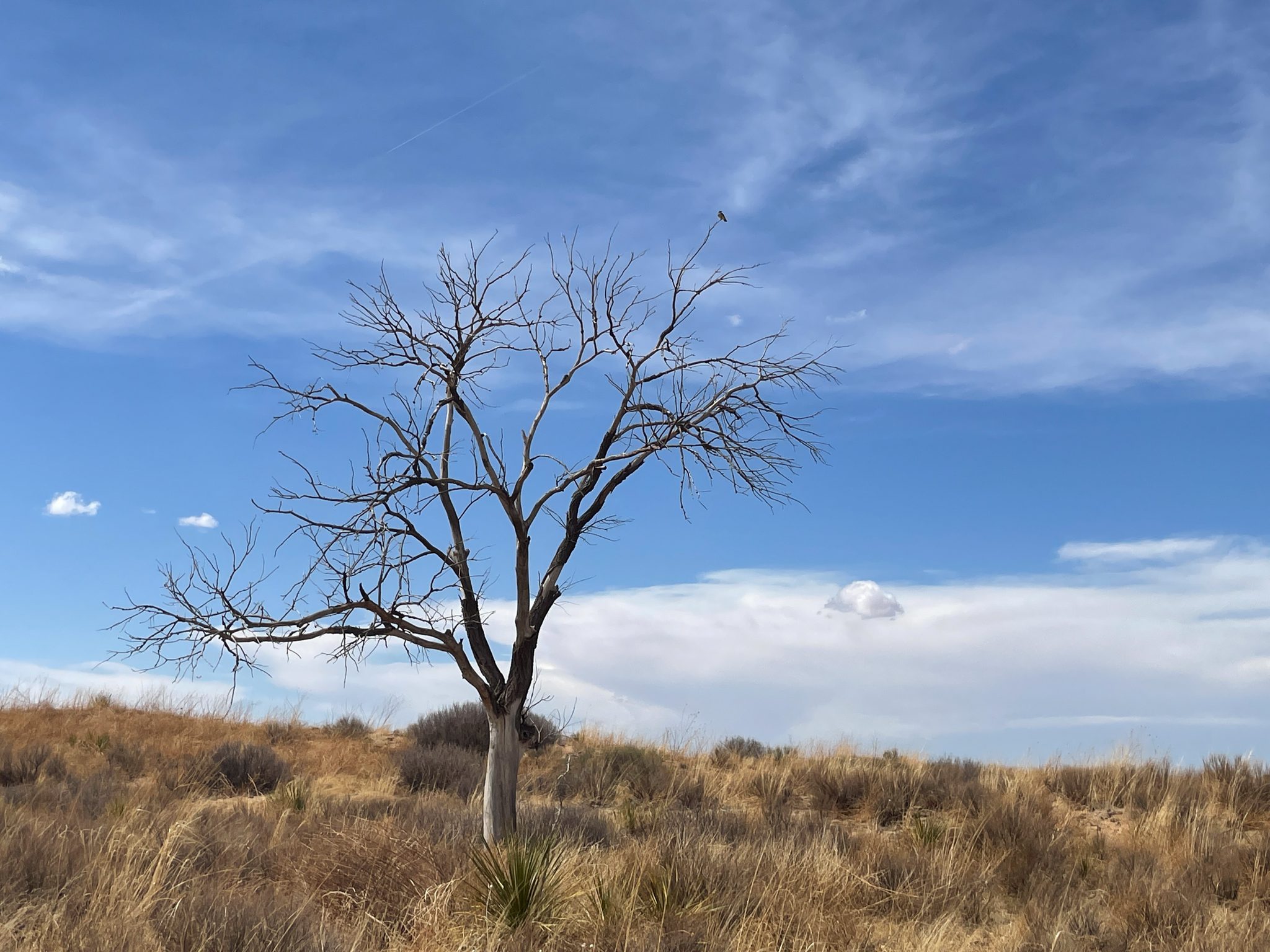 I went back out at dusk and caught the same tree at a different angle. Yet another tree muse for me. 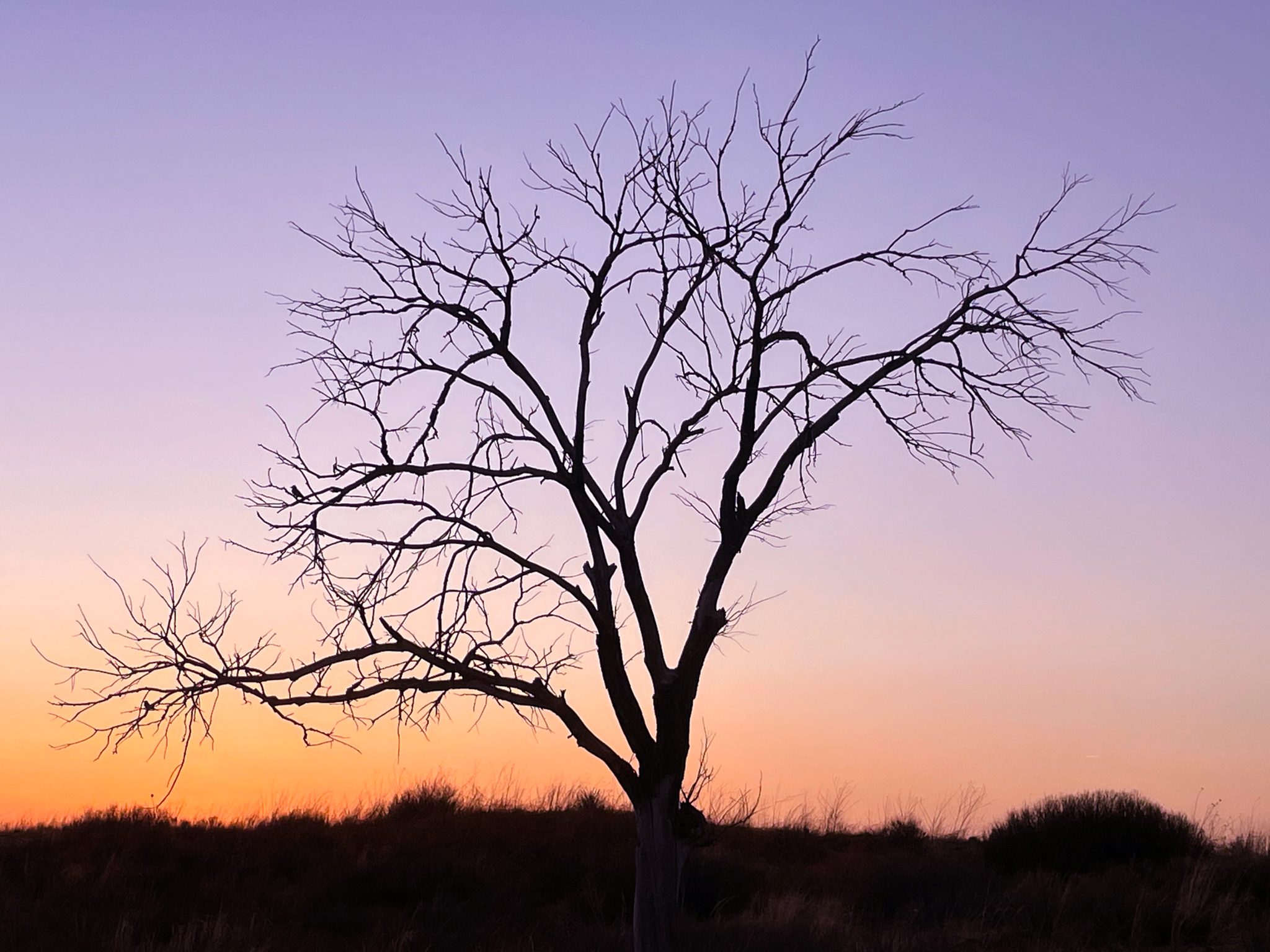 Oasis was my last stop in New Mexico, as I head across the middle of the country, eventually getting to the east coast. I’ve had a good run in New Mexico, despite fire watches, red flag warnings, freezing temps, 95F in the shad days, and high winds almost every day. Still, it was worth all that to see this part of the country and enjoy a little the beautiful light that seems to be unique to New Mexico.

A week ago it was the mountains I thought the most wonderful, and today it’s the plains. I guess it’s the feeling of bigness in both that carries me away.