Ever want to go underground and see what a real mine looks like? Me, too! So I did just that in Bisbee, Arizona last month. For the small price of $14, you too can wear a stylish orange or yellow safety vest and a rocking green hard hat as you take your seat on a tram that used to cart rocks out of the mine. Was it fun? Was it worth the money? 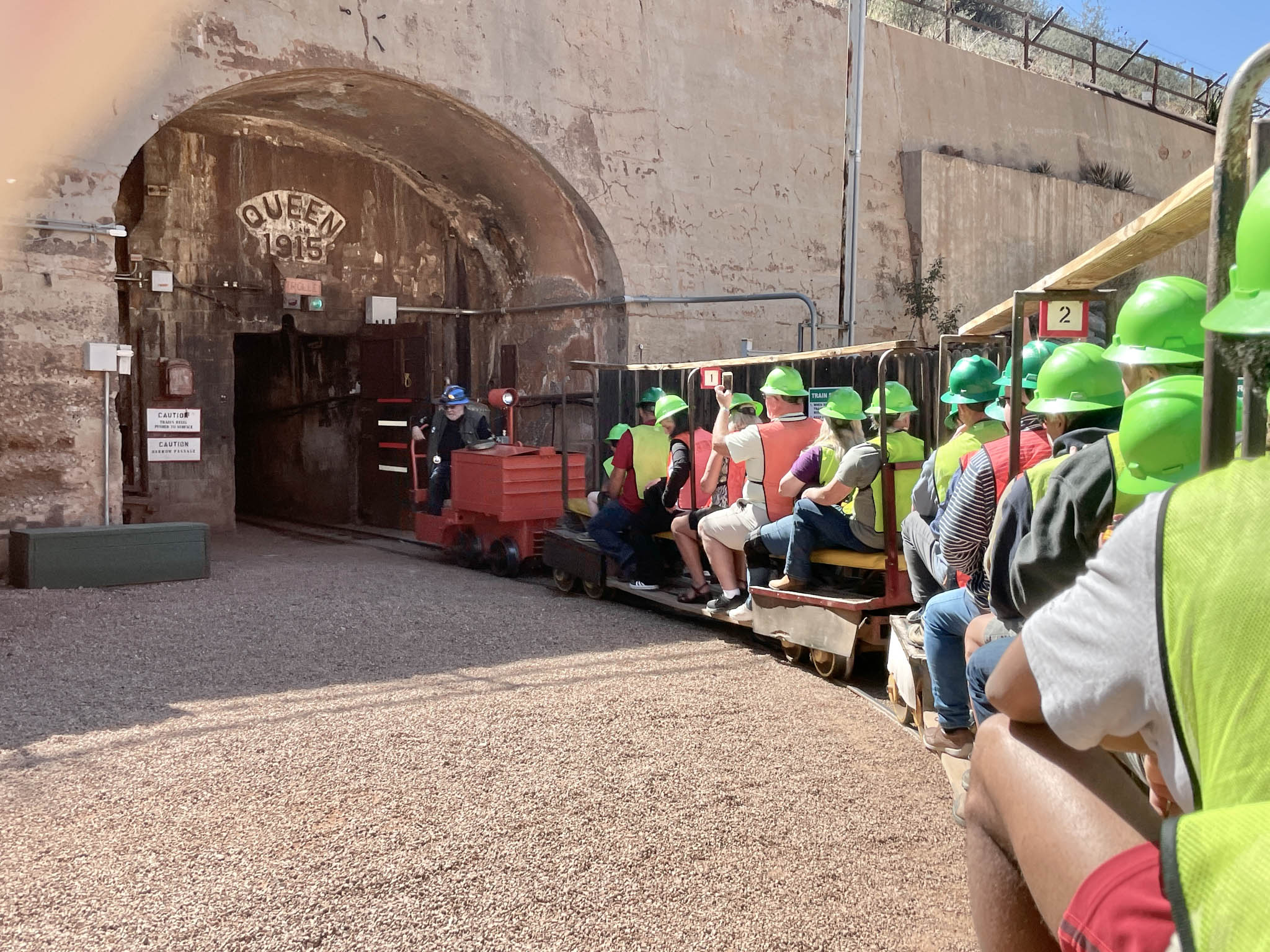 In short, absolutely worth the time and money. For me, it was especially interesting since my granddad worked as an electrician’s assistant in the Morenci mine, back when it was all underground, so I wanted to know a bit what that life felt like.

In this tour, you don’t descend into the mine because this level is the bottom one. instead you go straight into the heart of the mountain. The mine it its working day was seven levels high (each level separated by at least 100 feet of solid rock, starting from this ground level. 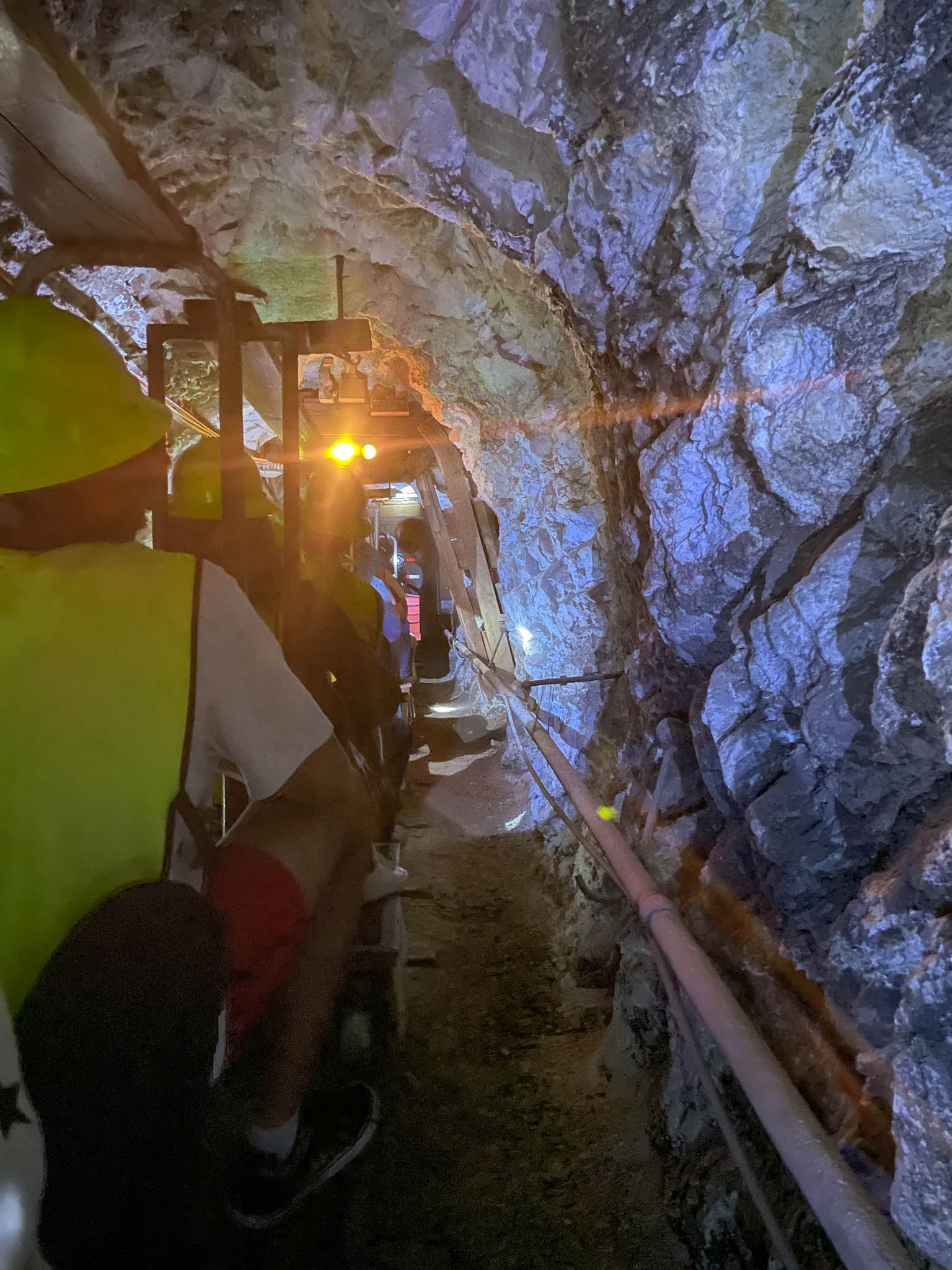 The old signs are still there, indicating how to get to different shafts. The tour guide was very knowledgeable, telling us how the shift bosses had to visit each of their crews twice a day to ensure operations were going smoothly and safely. For some bosses, that meant walking 5-7 miles a day underground. 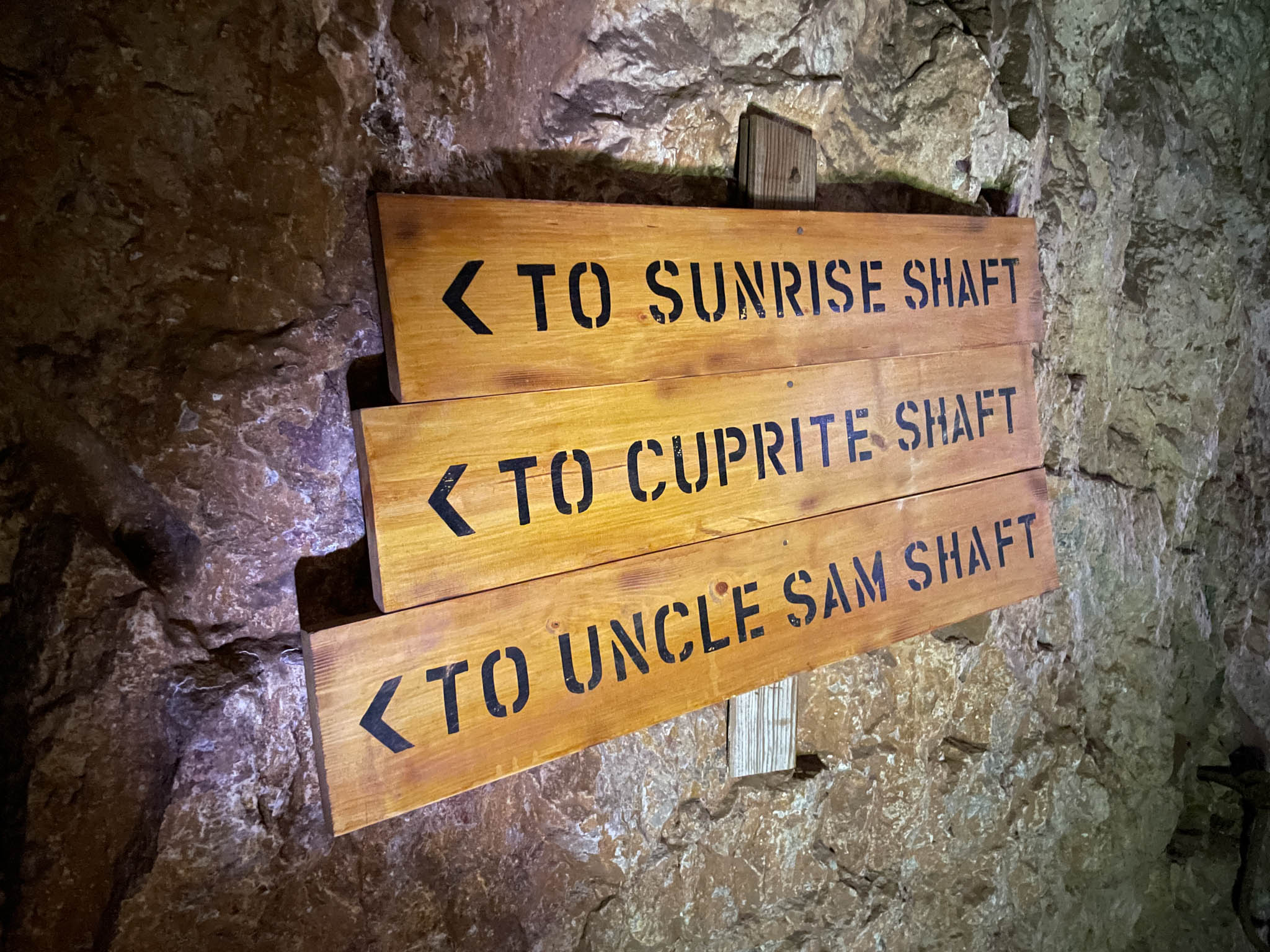 The highlight of the tour is walking down a tunnel where you get to see old equipment, drilling holes, loader stations, and really dive into how the mining was done. It was tough work, and the pay was pretty pathetic too. How tough? When the mine started out, men had to push loaders full of rocks out of the mine; later, they moved to mules, who could haul five bins at a time. 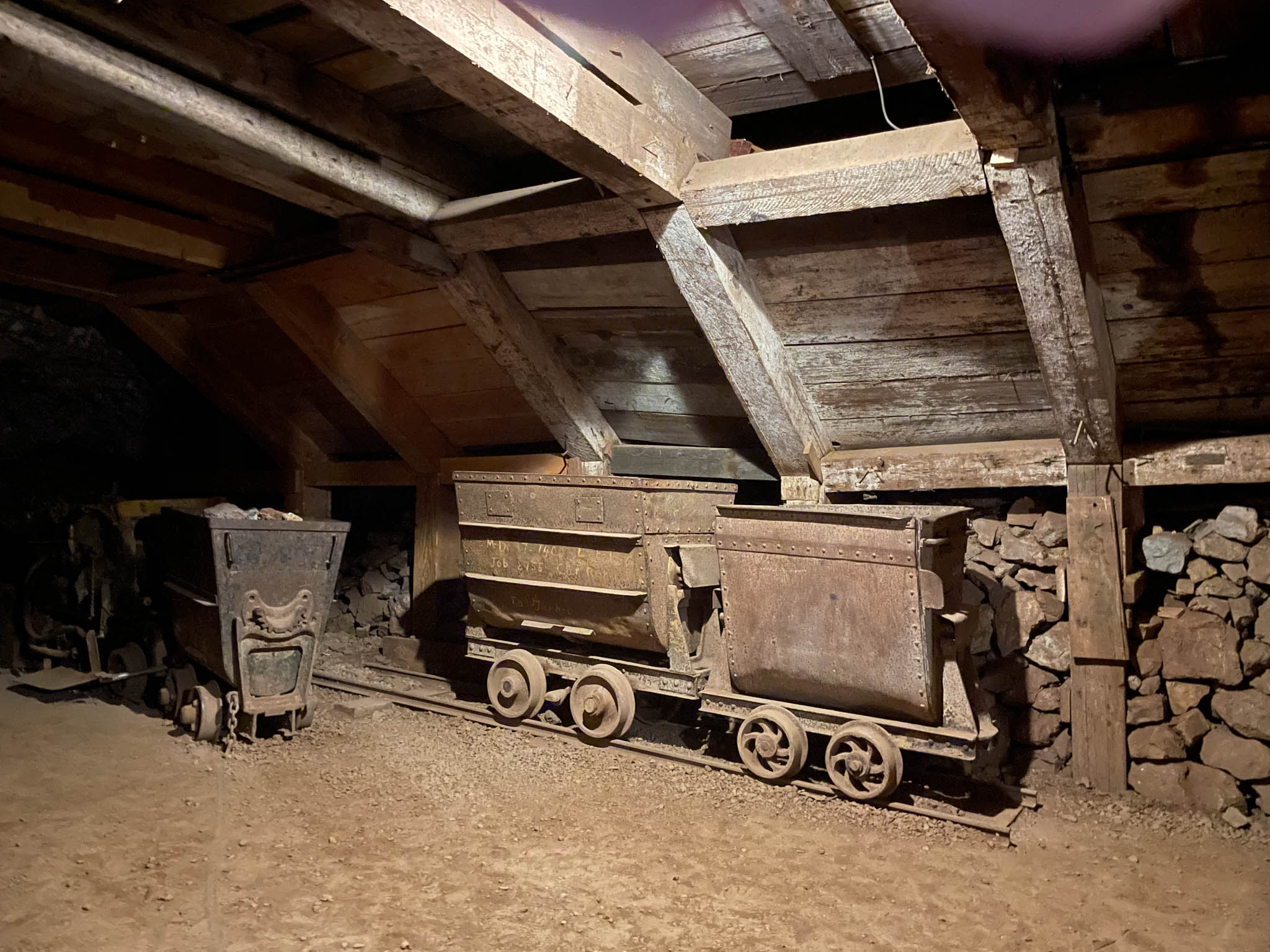 The tour ends in a big space where you can see the early mining, done with picks and drills, before the advent of explosives to get deeper into the rock. In the photo below, you can see some of the places where miners dug out copper deposits by brute strength. This spot was about 10 feet above me, so they did this work on ladders or rough scaffolding. Miners were a tough lot back then. 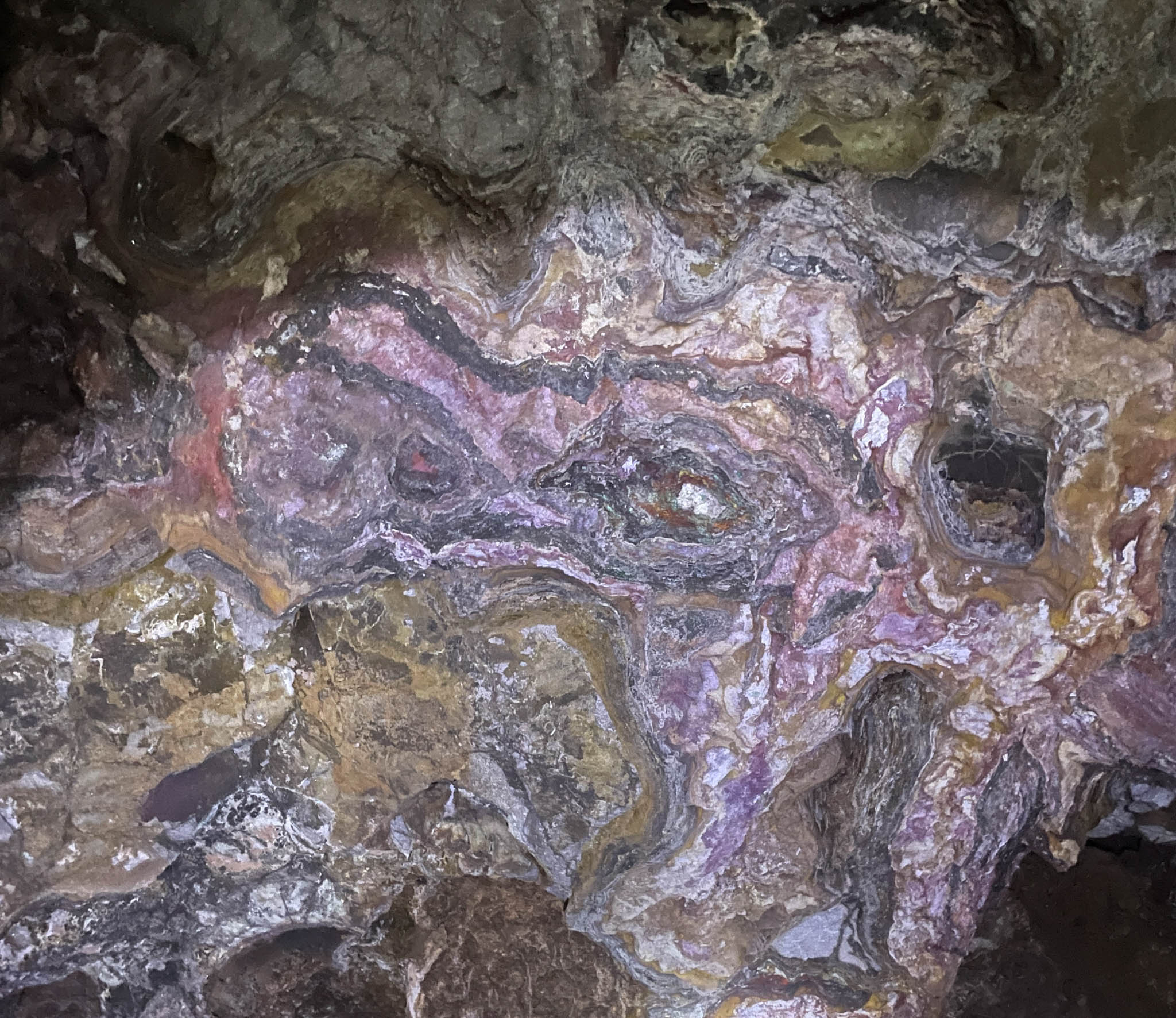 I really enjoyed the tour, learning about how mining was done over the years the Queen mine was open. After an hour, though, I was craving sunlight and warmth on my skin. I guess my granddad must have gotten used to be underground all day, every working day. I wish he was around for me to ask him about those days; he never talked about them so I don’t have any stories to recall.

(Historical notes: The Morenci mine was underground until 1932, when the mine closed due to the drop in copper prices, caused by the Great Depression. When it reopened in 1937, it was converted to an open pit mine, although it took five years to strip off the top of the mine and get to where the copper deposits lay. Morenci is the largest copper mine in Arizona and one of the largest in the world.)

Mining is one of the most dangerous jobs out there, and it shapes and crafts a particular type of person.

8 thoughts on “Bisbee Mine Tour, AZ”