When it’s 95,000 degrees in the desert and you’re camping without electricity, survival techniques can take a weird turn. Like driving a scenic loop on washboard gravel for three hours mostly so you can blast the air-conditioning as you cruise along at 15 mph. Well, that was my strategy last week. You might pick a different one. 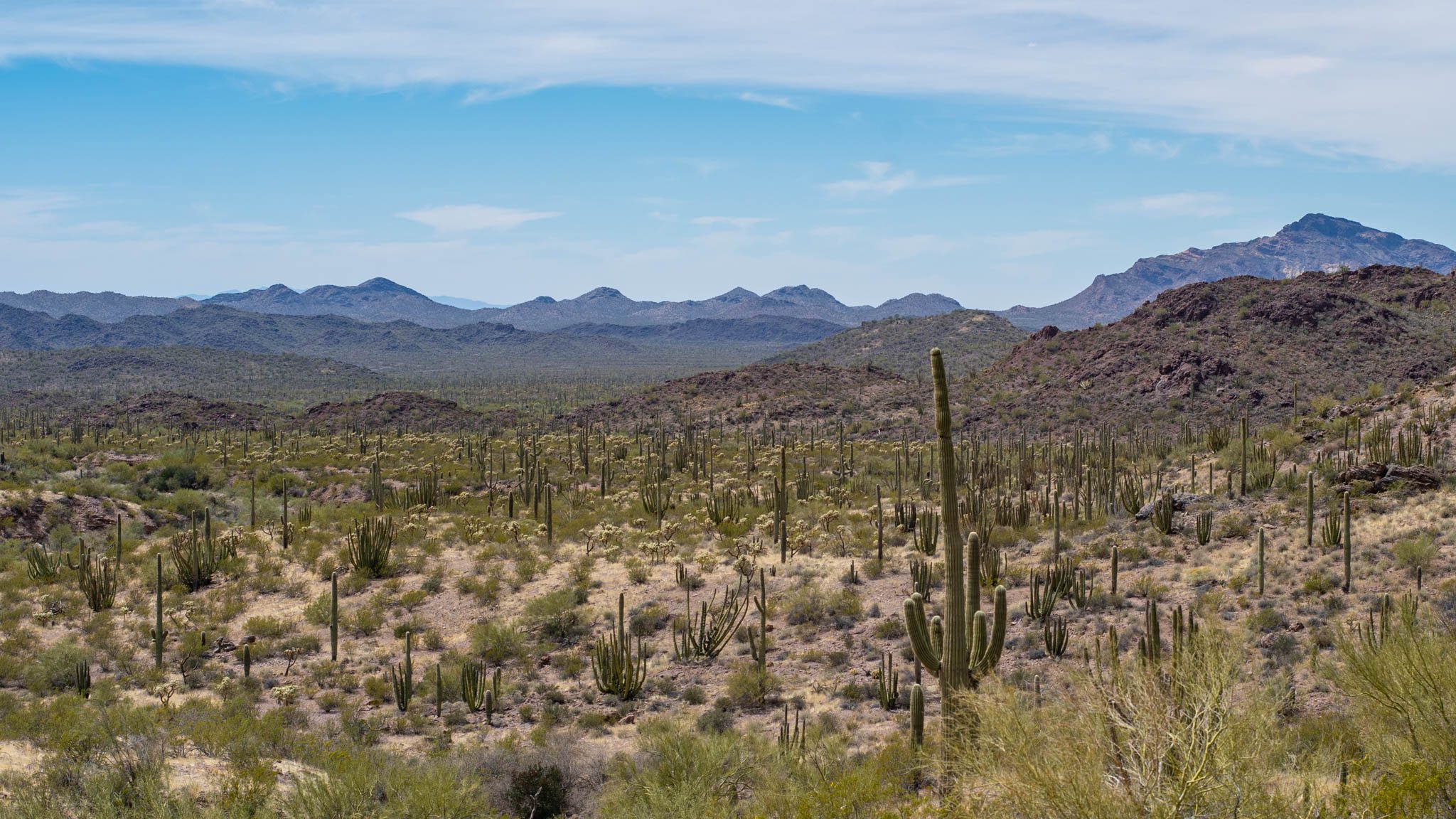 Seriously, it was actually 95F (35C) last weekend, so I used the Ridgeline’s super-awesome A/C as the excuse to drive a 21-mile loop through the Ajo Mountain area. When I drove down to Organ Pipe Cactus National Monument from Tucson the previous week, I saw mostly flat, hot desert and I was mentally preparing myself for flat, hot desert for the next two weeks. When I got closer to the campground and saw actual rocky mountains rising up from the desert floor, my immediate thought was “I gotta get me some of THAT.” And so I found myself last Friday experiencing the amazing scenery that is the Ajo Drive. (Lucky you, not having to deal with desert heat to enjoy these views! If you’re currently swearing at newly fallen snow in your front yard, this post is dedicated to you.) 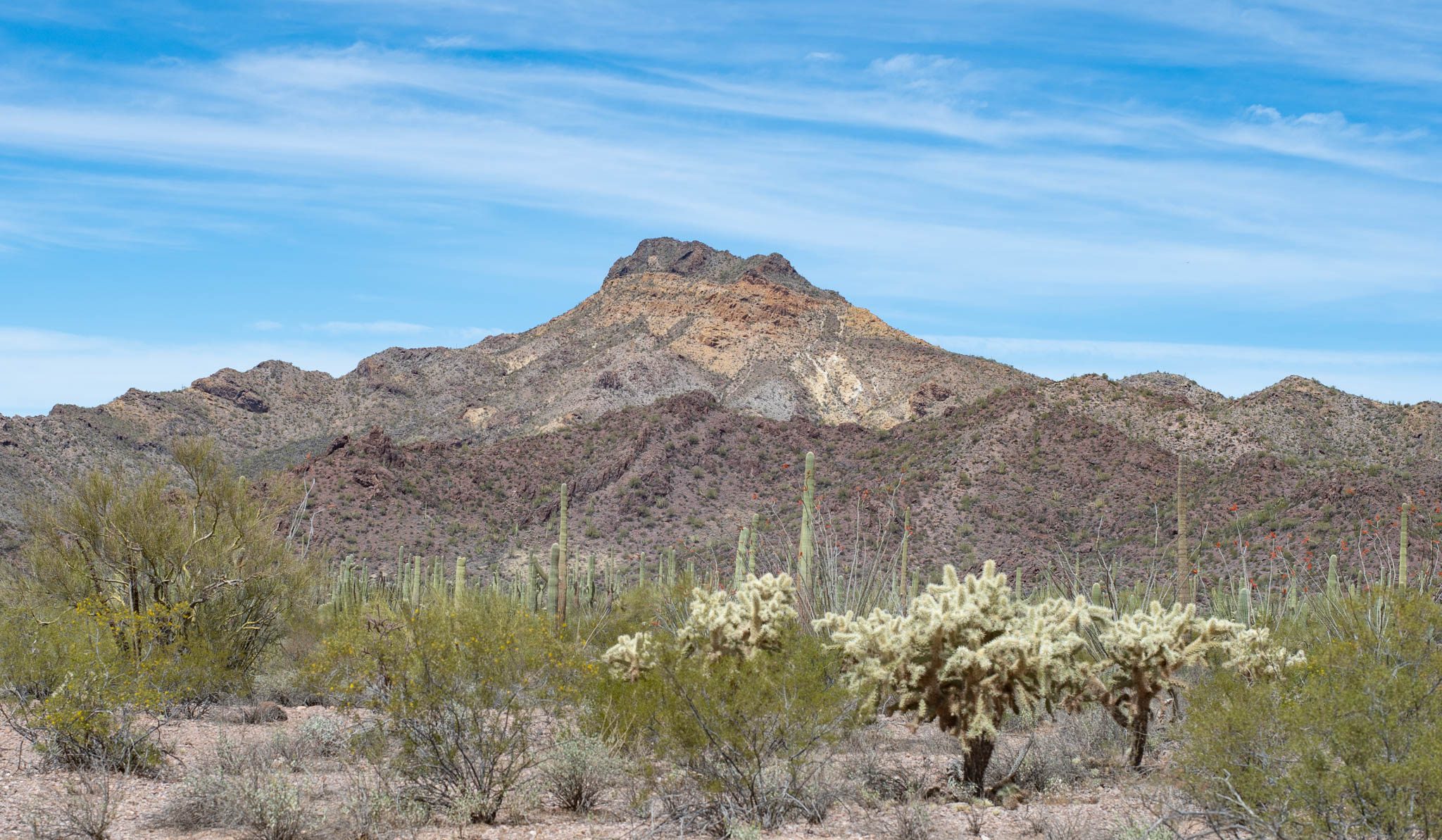 Cholla, saquaro cactus, and palo verde bushes framed the mountain views as I drove the first part of the loop. It was pretty breathtaking (the views as well as the heat. They say “it’s a dry heat” here but when it’s 95F with the sun beating down on you, it’s still freaking hot.) 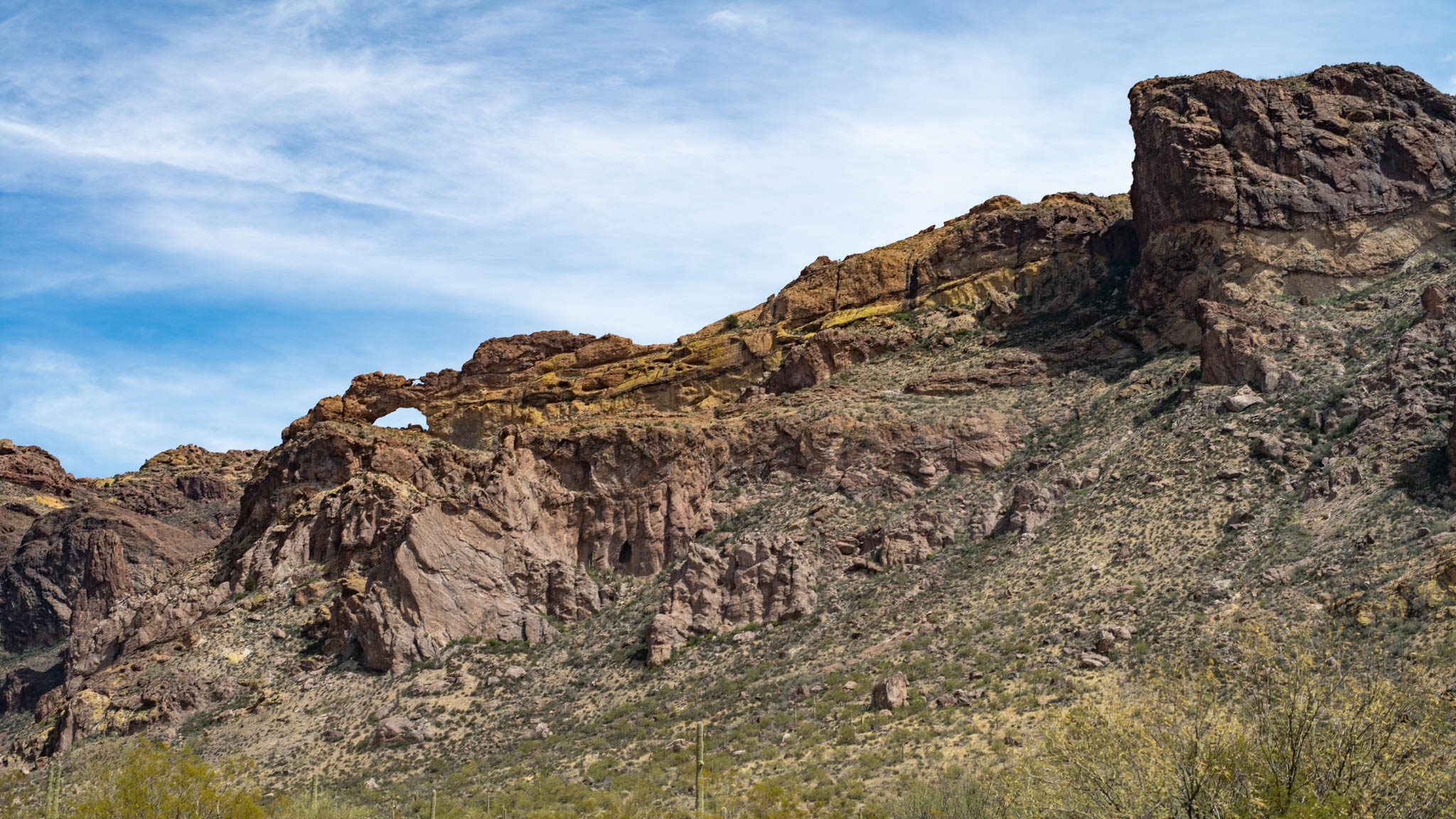 Much to my delight, I found an arch in the middle of nowhere. Makes sense, I guess, this stuff is the same basic geology as the arches up in Utah. I just hadn’t expected it! Always nice to have the landscape surprise me in a nice way. 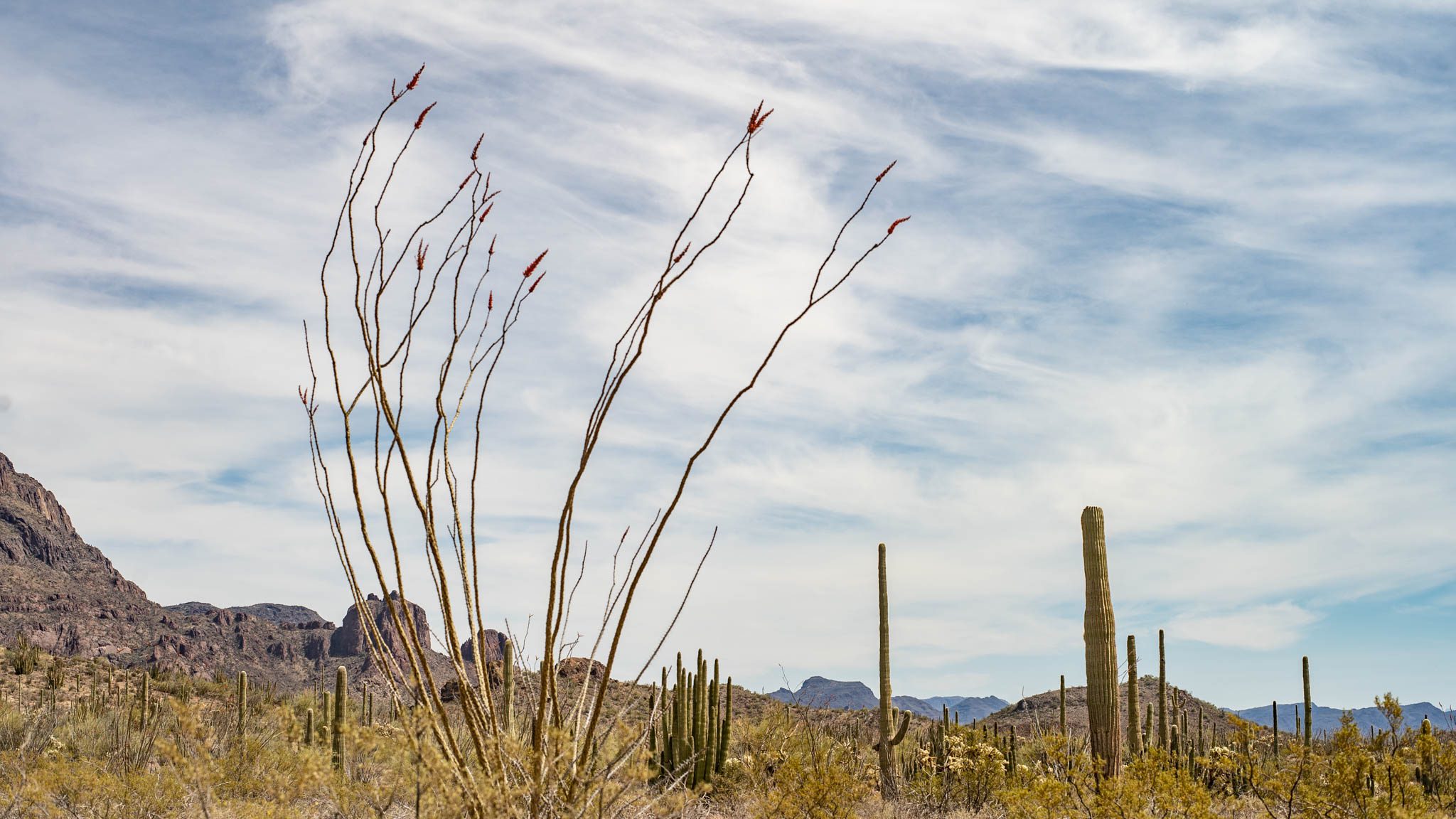 The ocotillo are blooming right now, long red-tipped branches sprouting tiny green leaves you can barely see. Those red blooms, though, you can spot them from the car on the opposite side of the road. I did actually get out of the car to take this shot. But I’ll be honest, a lot of the time I just rolled down the window and shot from the air-conditioned comfort of the Ridgeline. 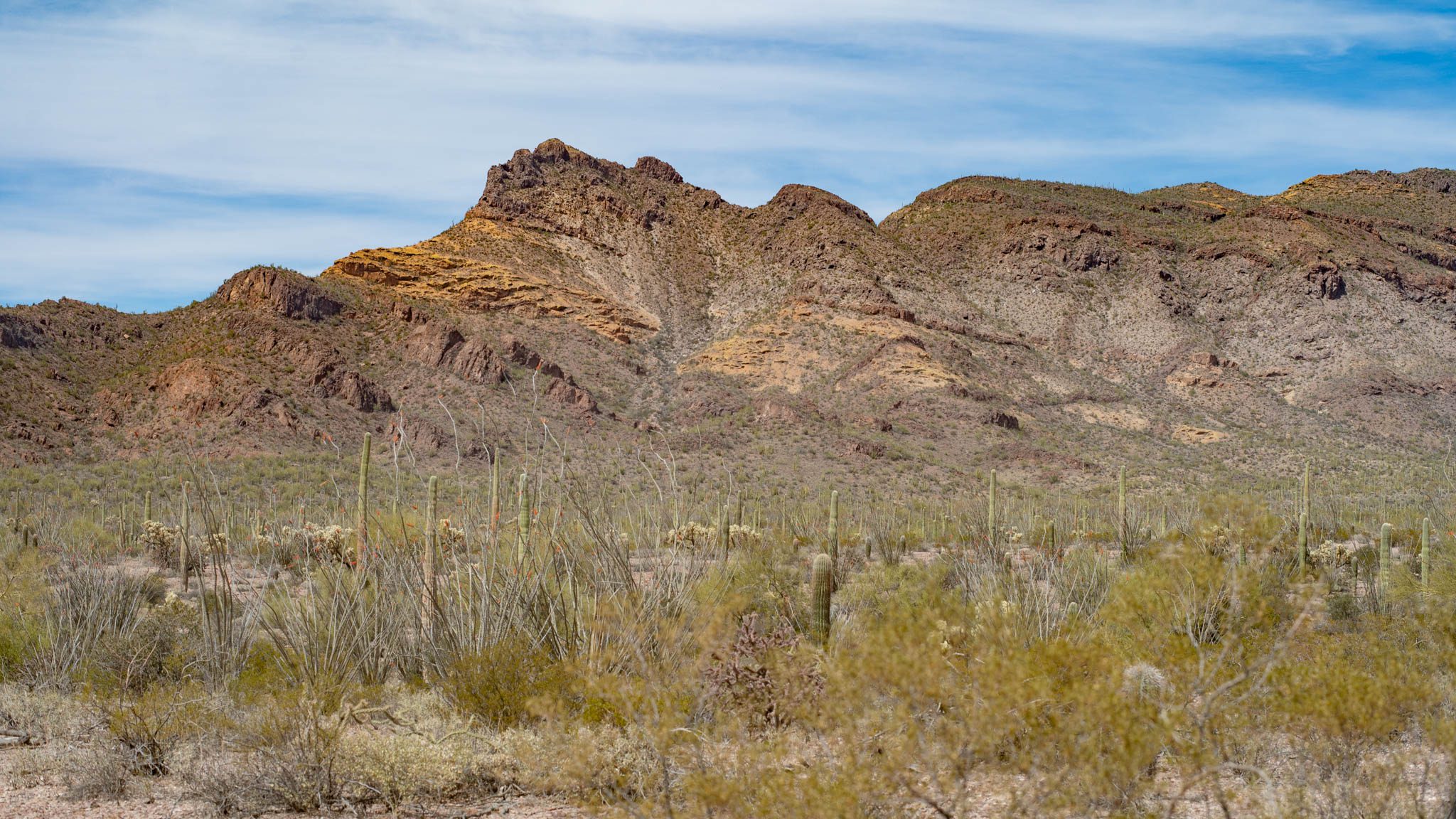 When I was growing up, my grandparents gave my family an annual subscription to Arizona Highways. Perhaps they thought it would influence my dad to move back to his birth state, but that was never going to happen. The magazine pictures made the desert actually look inviting, which amazed me, since most of what I saw of Arizona was whatever showed up out the window as we cruised the Interstate between LA and Phoenix. When I saw this view, it looked like almost every old cover of the Arizona Highways, so of course I stopped in the middle of the road to take the shot (it wasn’t a very busy road, trust me). 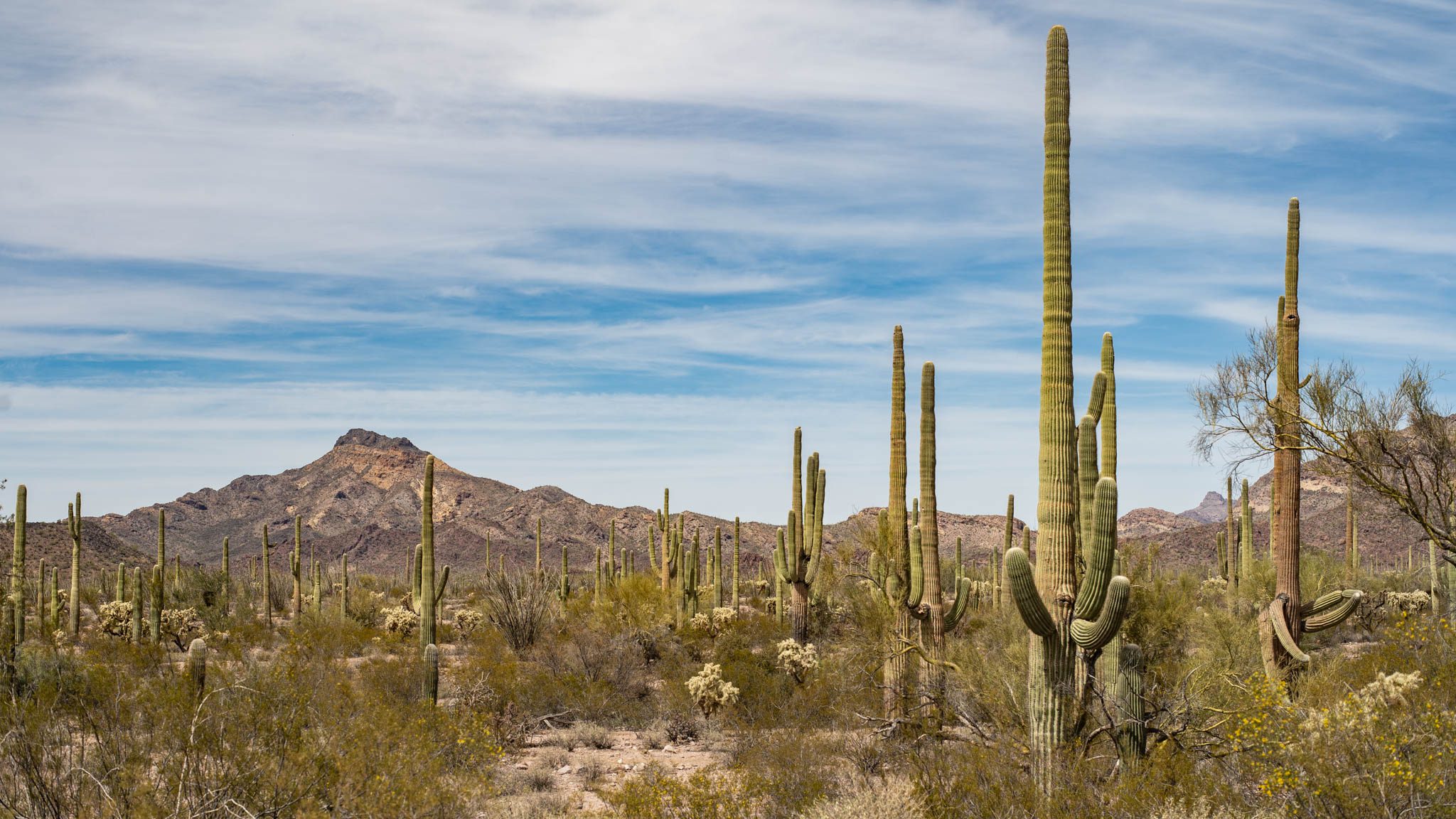 So there you have it, a quick tour of some really amazing desert mountain scenery. I felt cooler after three hours in the car, which was a nice bonus. If you’re in snow-land, hope you feel warmer now.

To say nothing is out here is incorrect; to say the desert is stingy with everything except space and light, stone and earth is closer to the truth.