In an old armory building just off the main street of Deming, New Mexico, you’ll find the Luna Mimbres Museum. I thought I was going to learn about the indigenous Mimbres people, but I couldn’t have been more wrong. This is one amazingly strange and wonderful museum, as you’ll see…

Yes, There Was Pottery

Half of the first floor does contain some beautiful displays of classic Mimbres pottery, most of it discovered in the area around Deming. 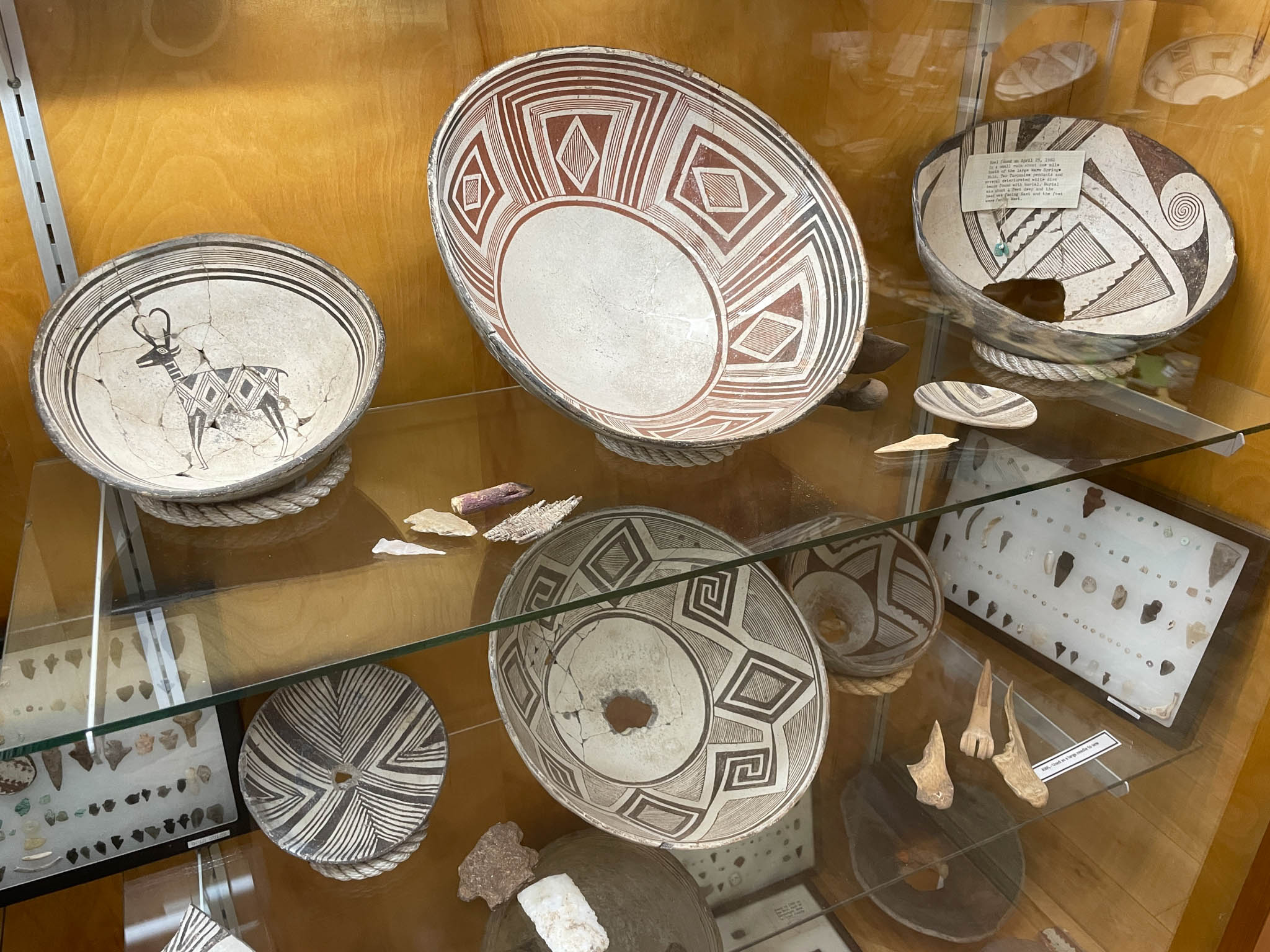 Not much is known about the Mimbres people because they didn’t keep any written records. We mostly know about them through their pottery. Their custom was to bury the dead with pottery so many of their creations have been excavated. When you see a bowl or pot with a hole in the bottom (see photo above), it was done on purpose to let the spirit of the dead person escape. 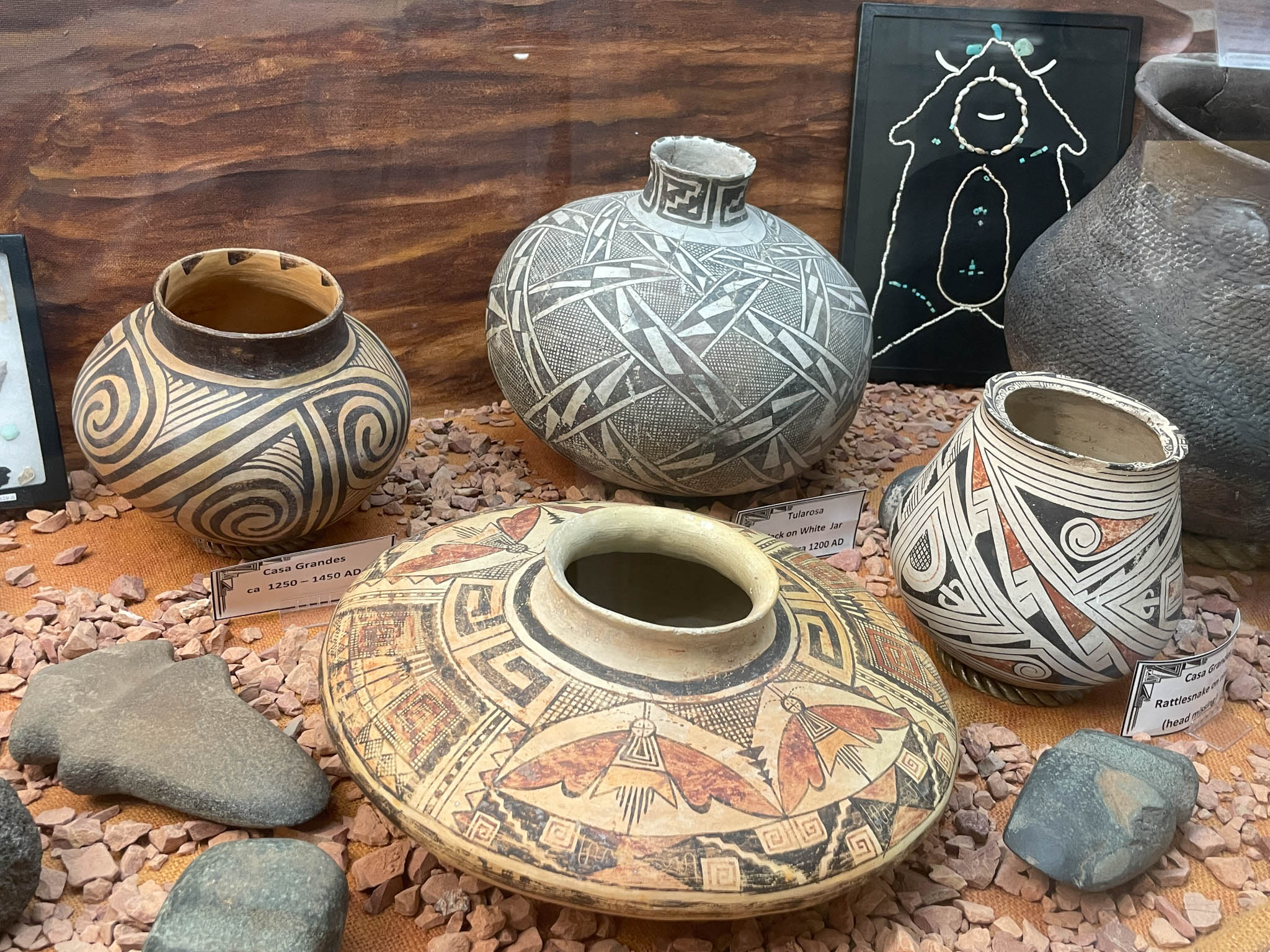 Rocks of All Kinds…

Wander a bit down a hallway with some old pianos and quilts, and you come upon an extensive display of rock collections. And by collections, I mean someone was absolutely *obsessed* with rocks. The displays range from Wyoming and Colorado finds to local New Mexico mines and they’re all fun to look at. There’s even a basketball-sized chunk of meteorite from Campo del Cielo, Argentina. 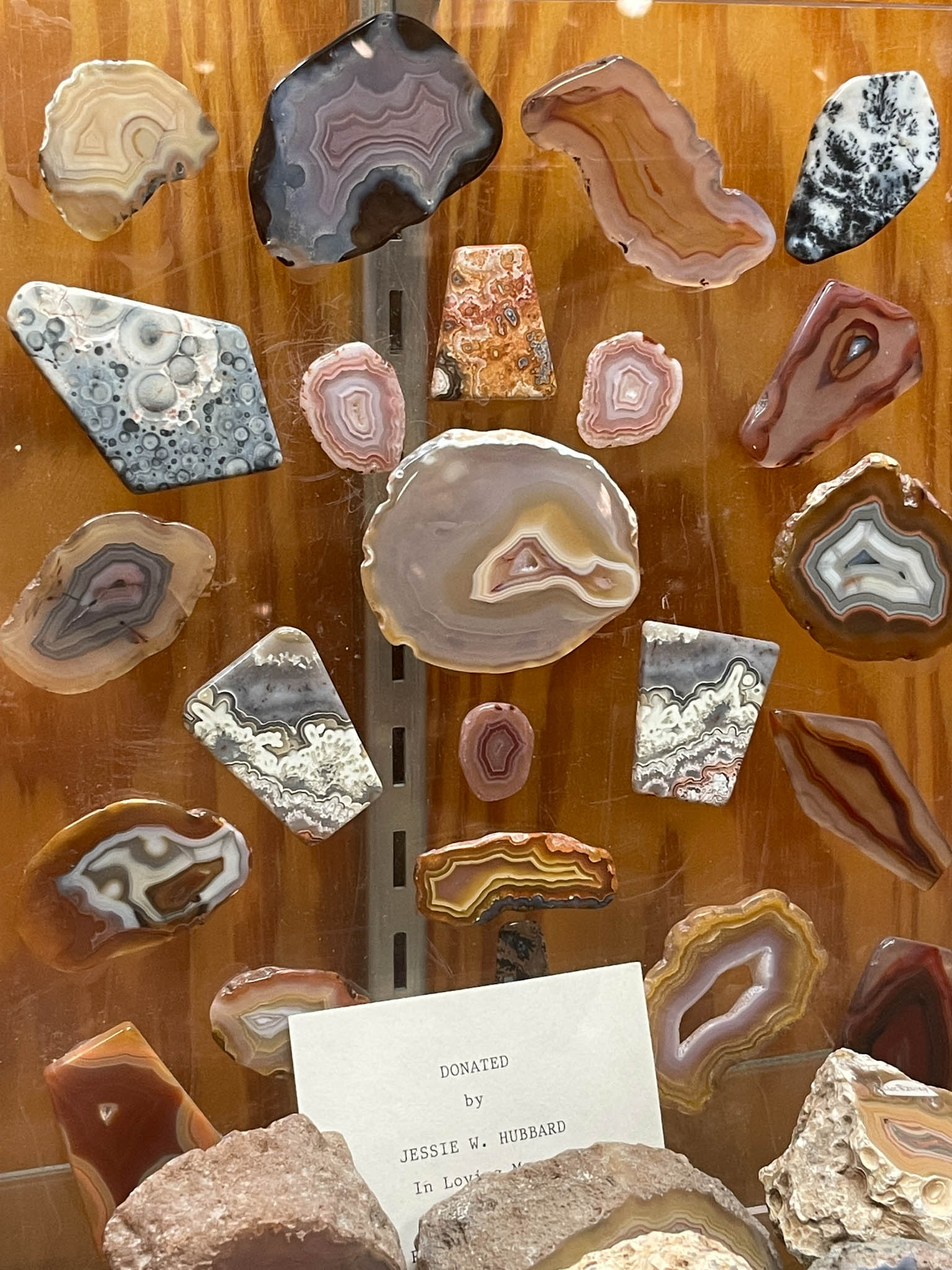 They even have a Petoskey stone. I have one of those, from my visit to Petoskey last summer. Now I feel even more cool, knowing I have a rock that’s in a museum, even if it is just a little museum in Deming, NM. 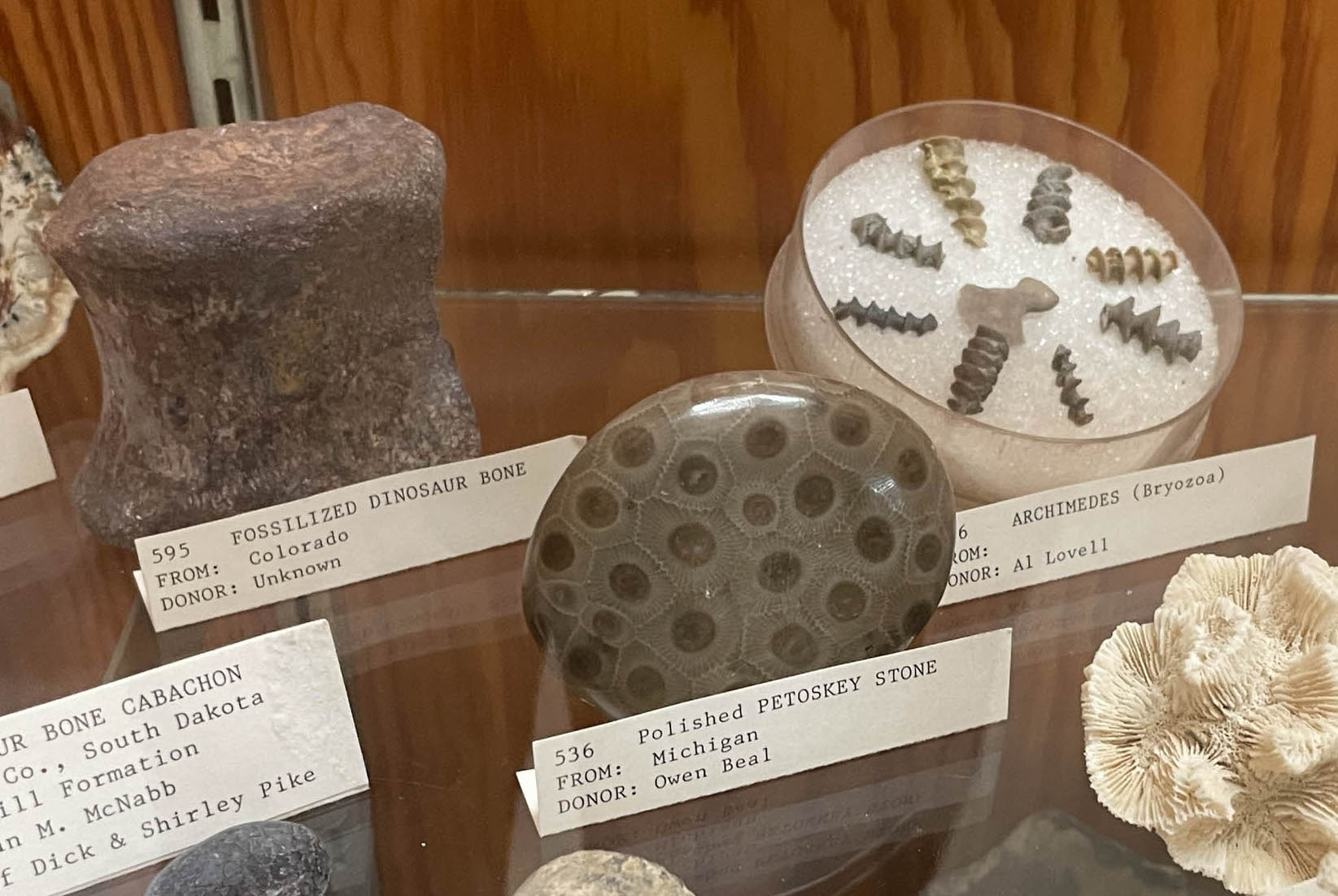 The museum goes big on all things western, from saddles to signage to, of course, hats. I have to admit itm that purple hat had me wondering how I might go about obtaining a cowboy hat of a certain color. 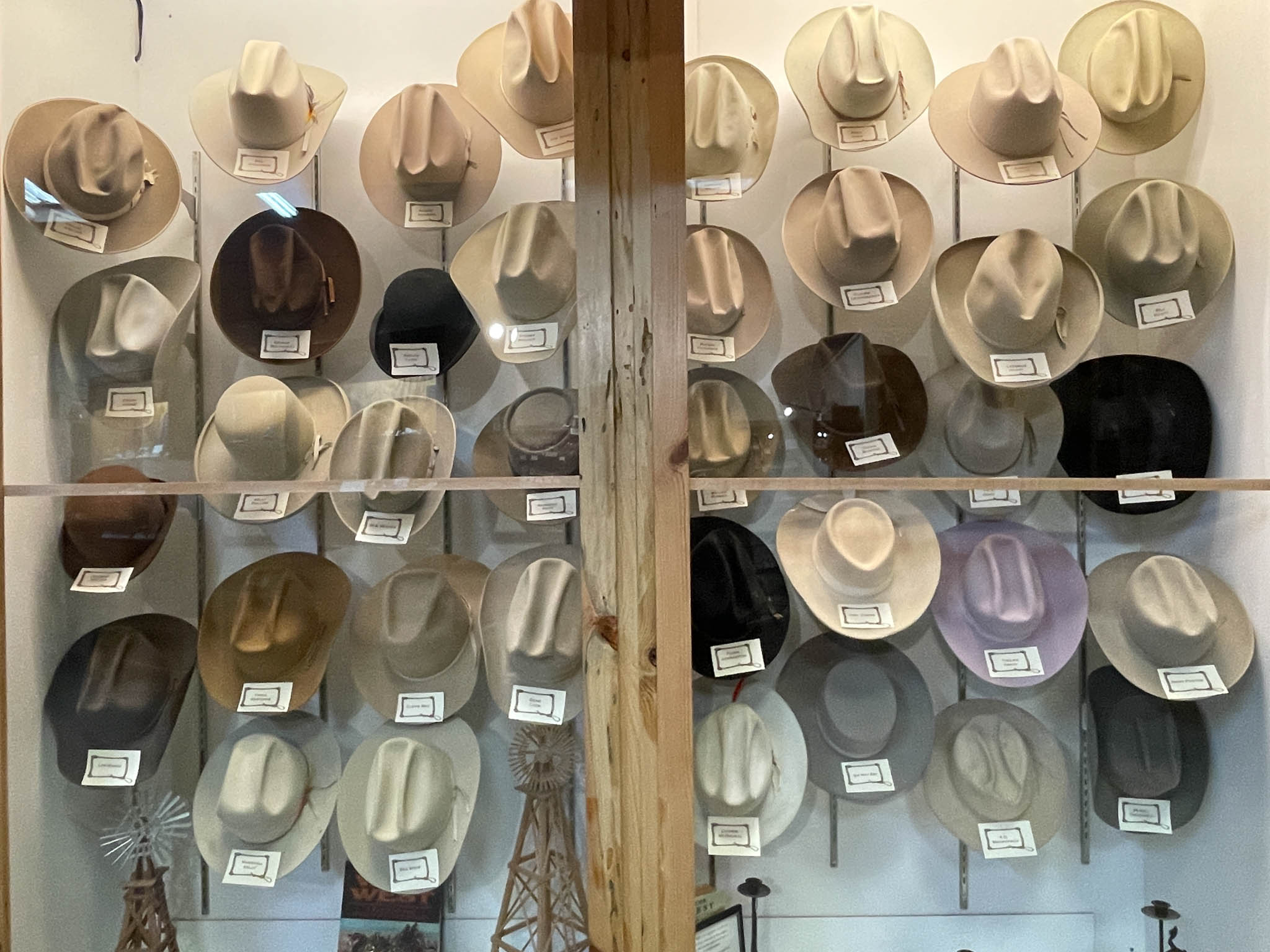 There are not one, but TWO, displays of different types of barbed wire. Having run into some (literally) in 2020, I have a new-found appreciation for the subject. I came away impressed with the many different variations on barbed wire. Did you know there were over 1,000 different designs? Neither did it. It’s kind of like artwork when displayed like this. (Also, this was one display that didn’t bother with the usual “Do Not Touch” signs, for obvious reasons!) 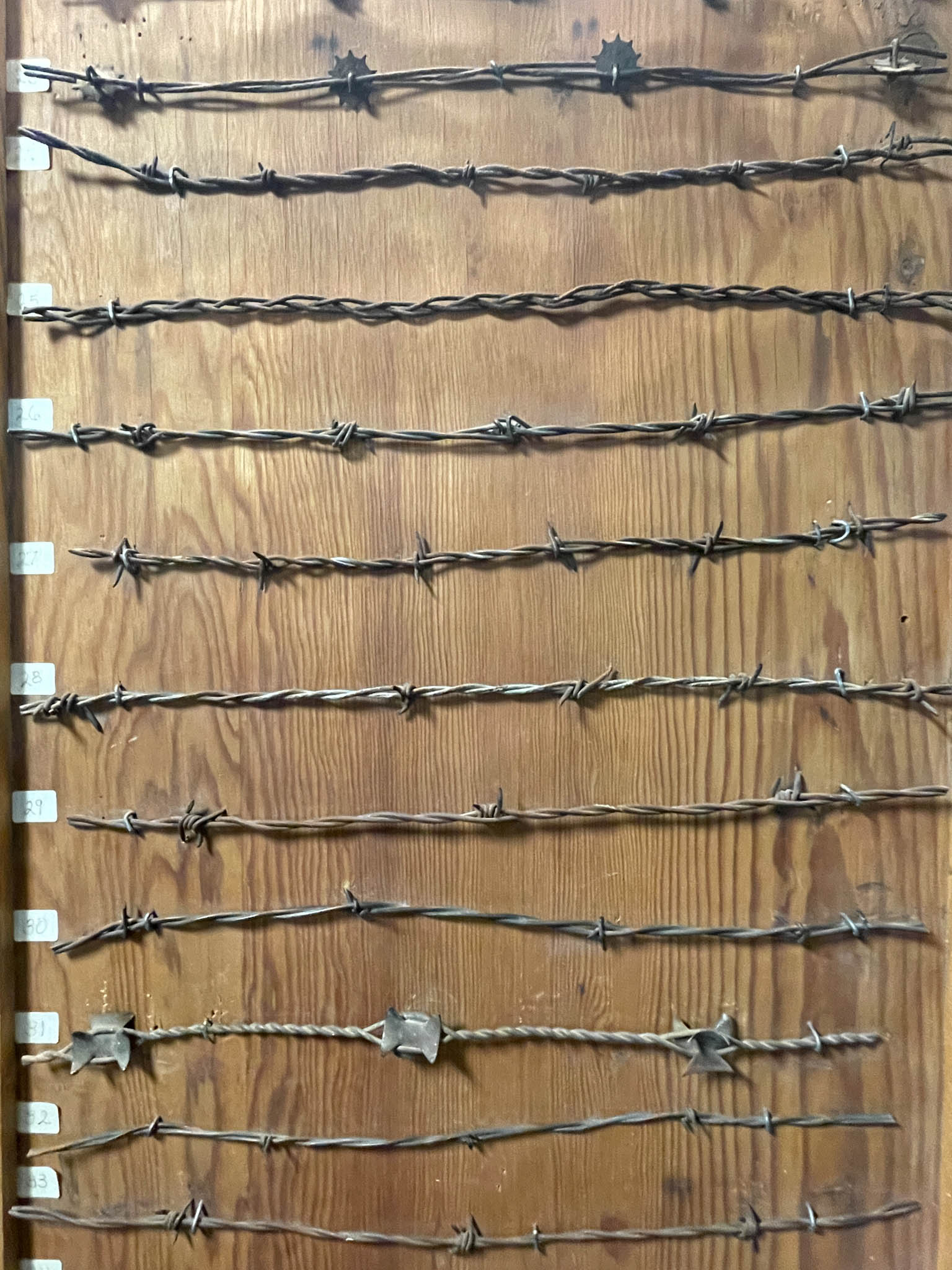 And yes, there is a jail cell, just past the barbed wire display. I don’t think I’d ever been in a museum with a jail cell. I’ve been to Alcatraz but the whole point of that place is the jail cells. This was just a cell back off to one side in an otherwise unimpressive hallway. Two points for Luna County saving this weird little piece of local history. The museum also contains a horse-drawn funeral cortege, a casket display, and small rooms showing old-time dental, newspaper, mercantile, dressmakers, and funeral services. It’s all pretty interesting to see the old things and compare them to our present-day versions. 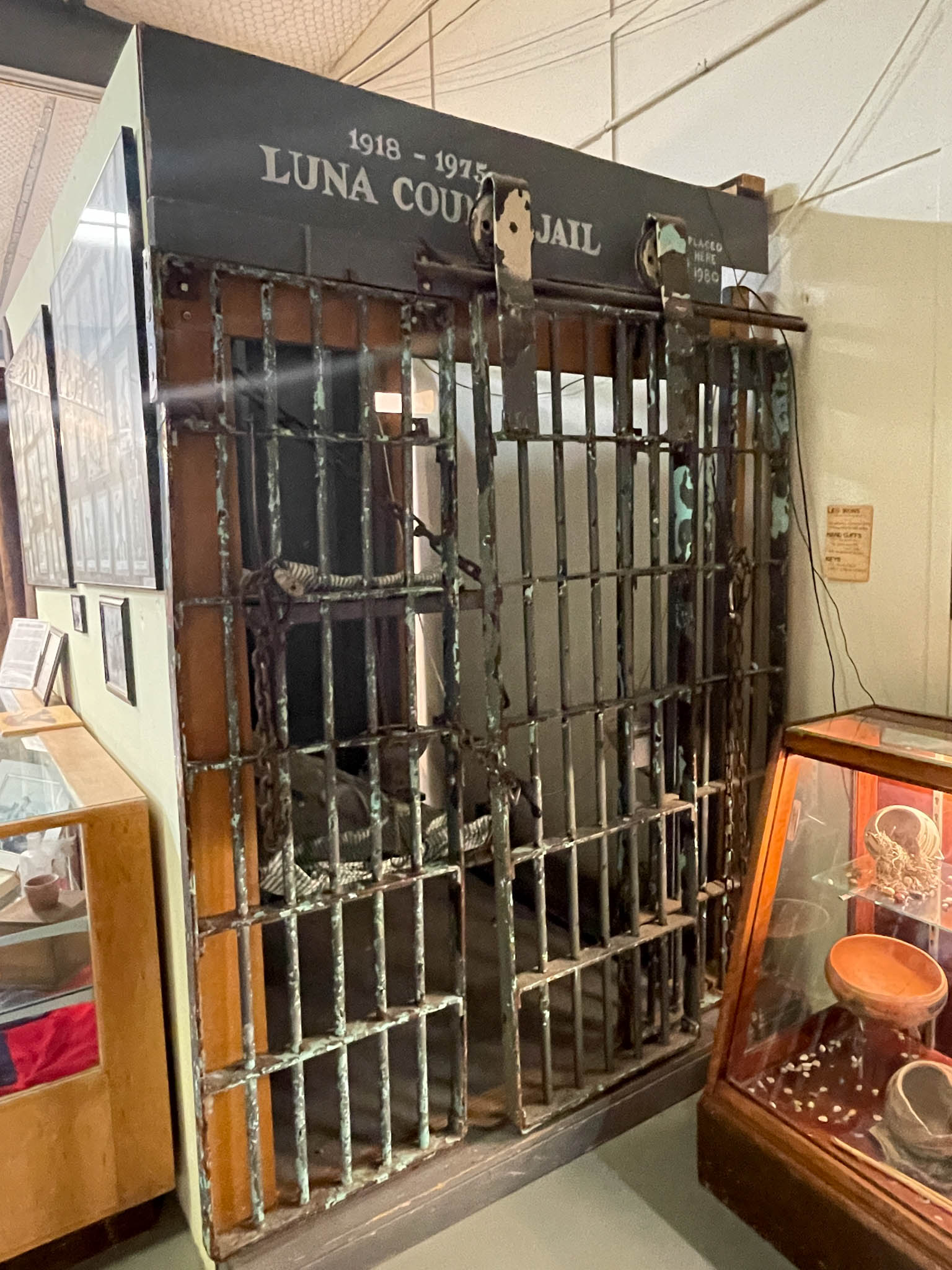 It’s the second floor where things get really weird and wonderful. It starts with two cabinets full of large, colorful nutcrackers (cover photo for this article) and then moves into Mexican religious shrines before continuing on to handmade quilts and lace, each one carefully annotated for posterity. 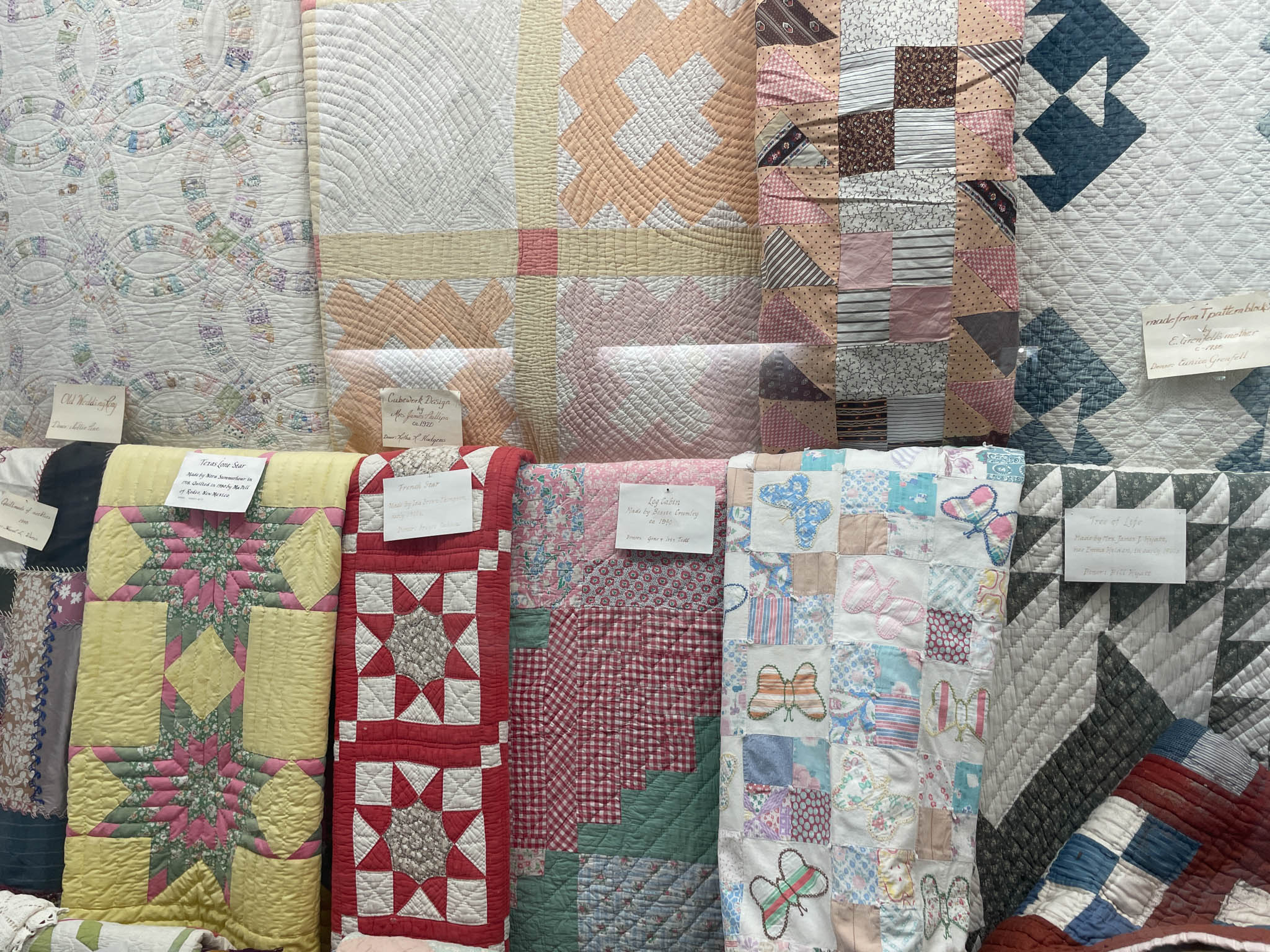 In the back of the huge room is a display case featuring featured hats and matching gloves. No, I don’t have any idea why either, but it was an impressive little display, complete with the acknowledgement that the fashion of decorating hats with bird feathers led to the near extinction of many of our feathered friends. Two more points to the museum for presenting a well-rounded historical view of the feathered hat trend. 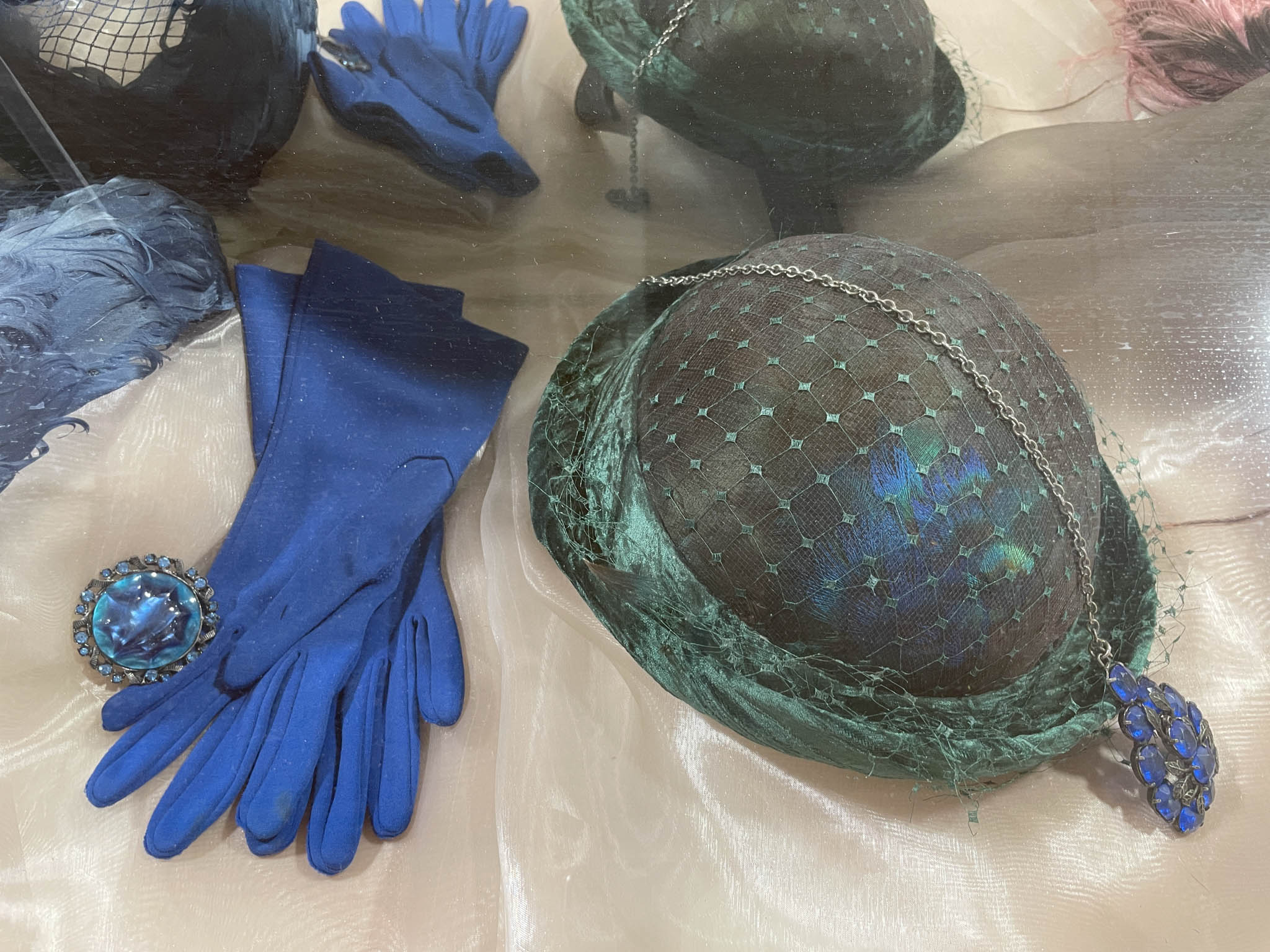 The teacup collection was one of my favorites, maybe because it reminded me of the old teacups and saucers my grandmother Clara used. Hers weren’t fancy but neither were most of these either. They were reminders of an earlier time, when ladies having tea was a special moment, marked with special dishes. It made me nostalgic to see these. Maybe we need to bring back the whole idea of sitting down with a cup of tea in a lovely cup sitting on a matching saucer. 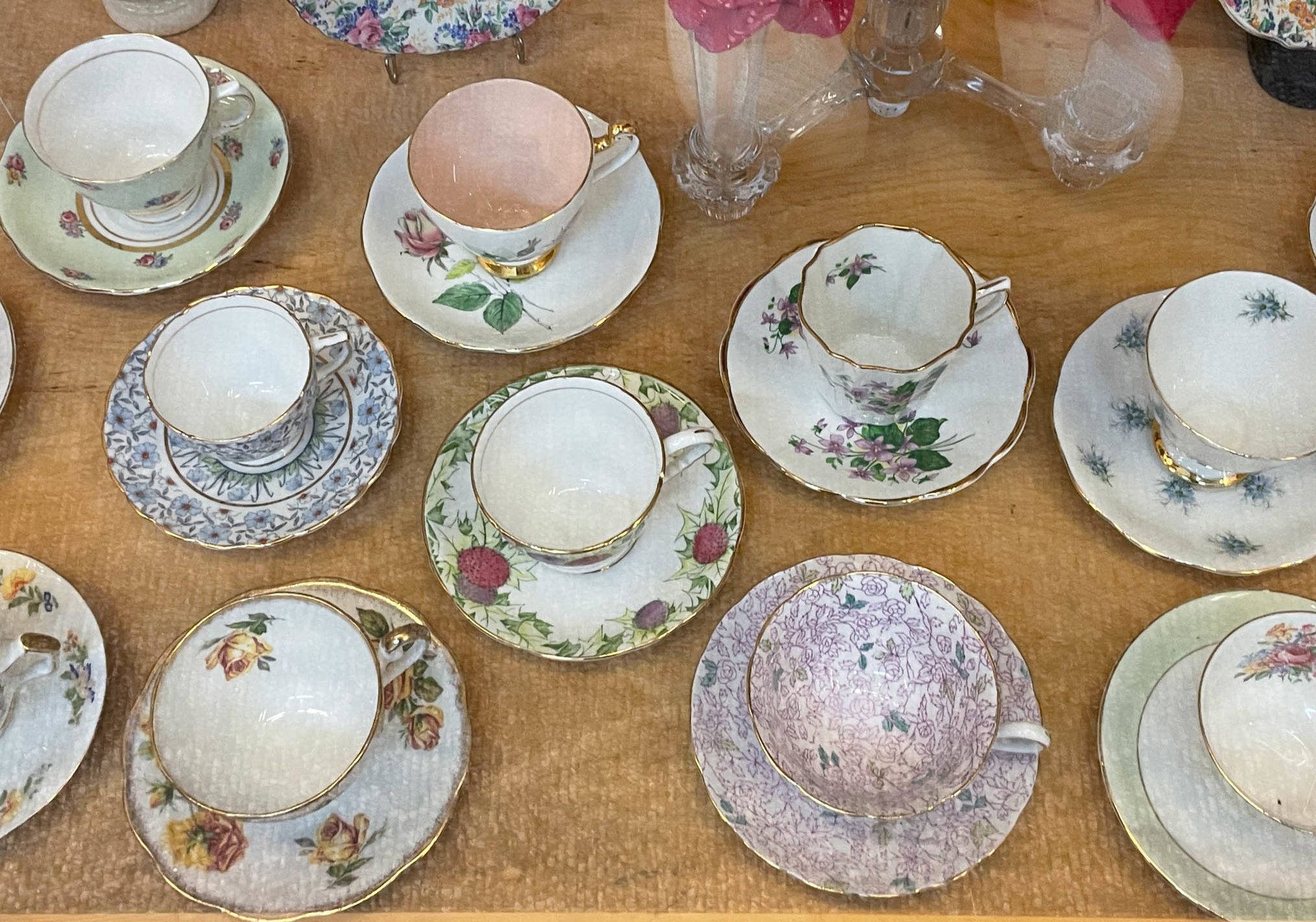 Next to the feathered hats was a display of very old cameras, some of which I had never seen before. This old Brownie camera reminded me of one my grandmother had a hundred years ago. I just did the math, and yes, she was using that camera to take pictures back in the early 1920s. I still have a few of those photos tucked away in my little box of treasures. It’s nice to know that the old cameras still exist, even as we move to faster, better picture-taking with our phones. 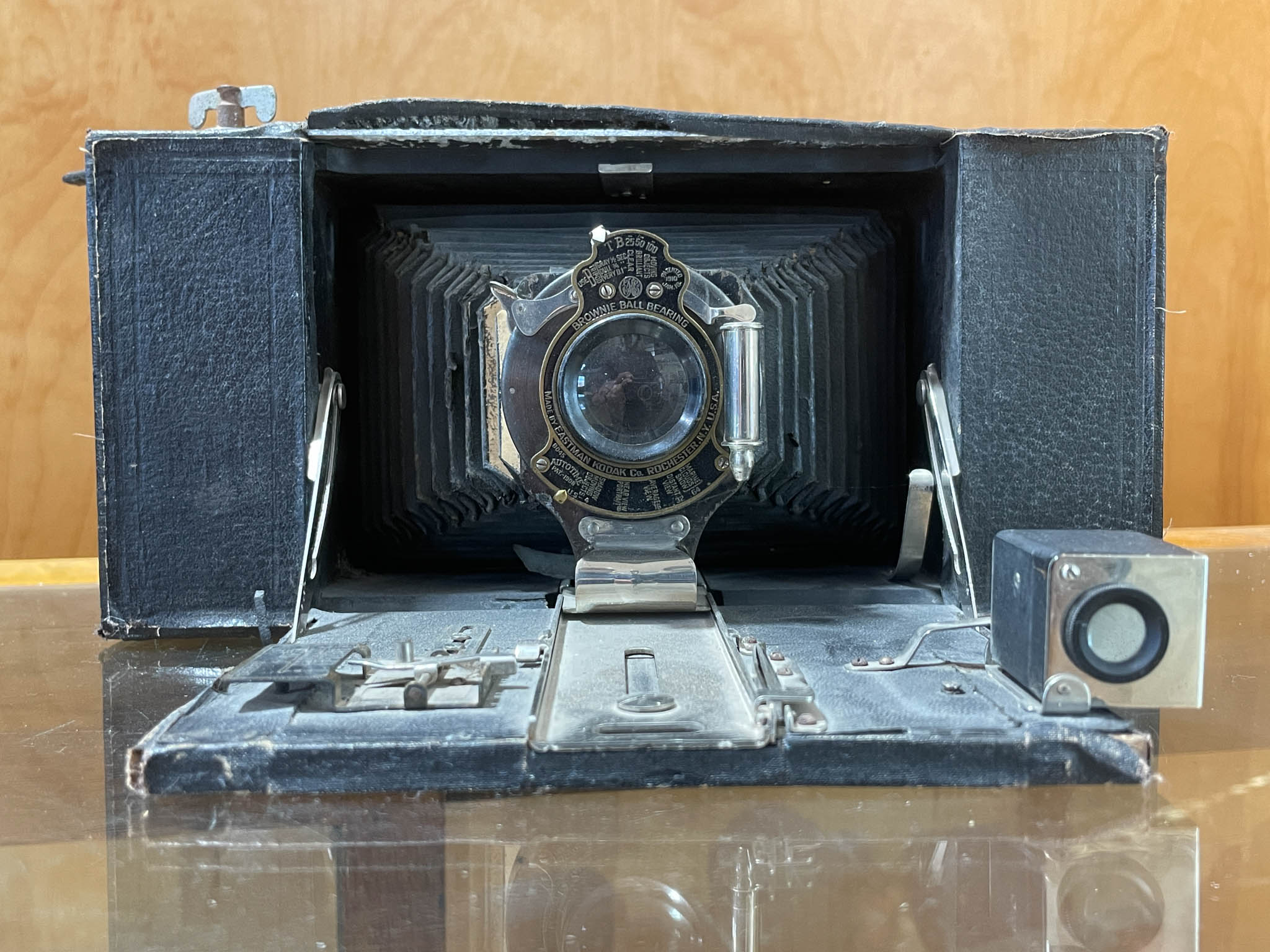 After going through both floors of the Luna Mimbres Museum, it took me a while to narrow down my 120 photos for this post. There was so much cool stuff inside this ordinary looking building. To end this tour, I’m featuring my three favorite things.

In third place is this really old calculating machine. I have no idea how it works but it looks really cool. 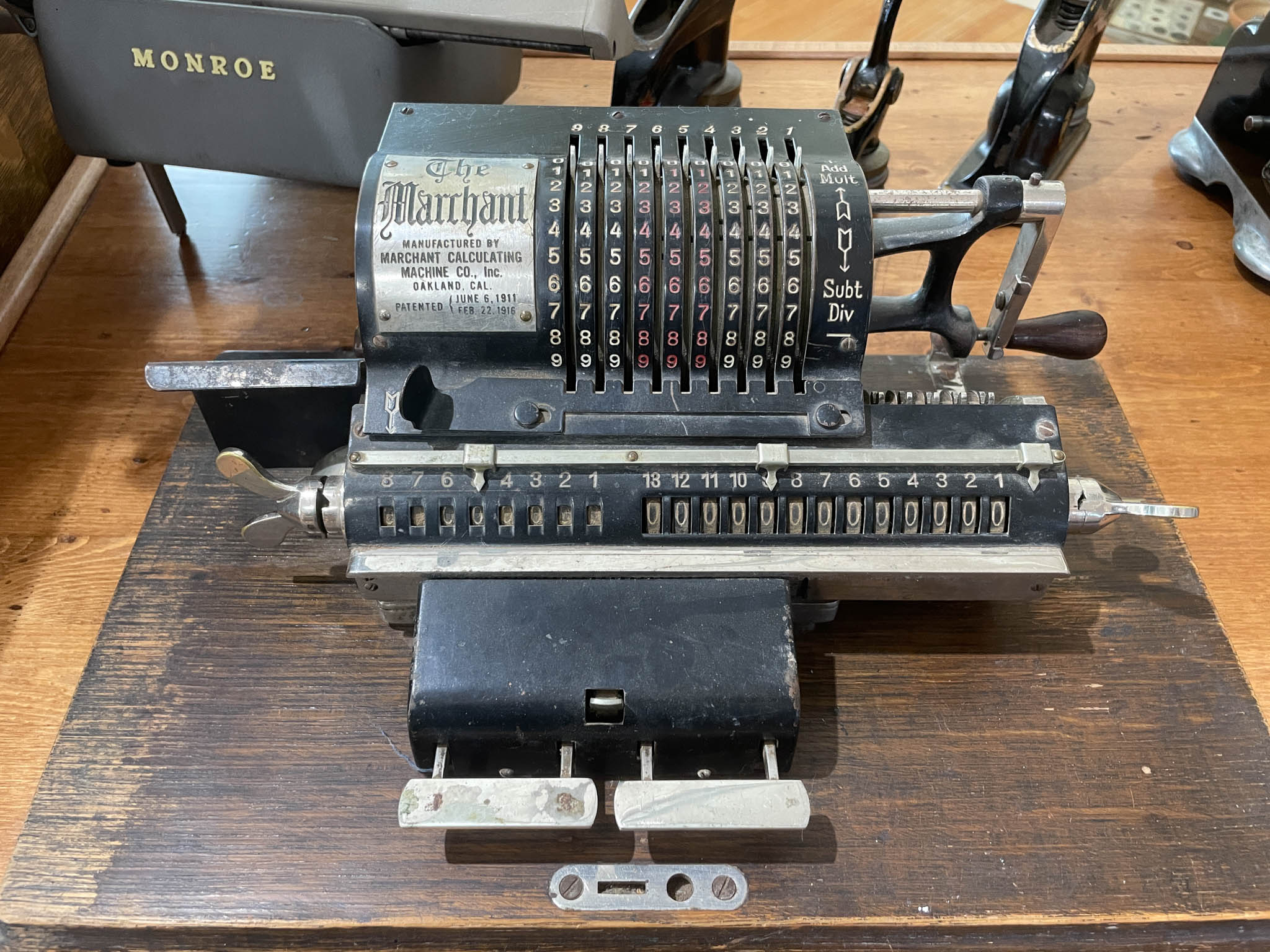 Second place was an iron lung machine. Before there was a polio vaccine, when people got infected with polio badly enough that they couldn’t breathe on their own, they got put into an iron lung machine like this one. In most cases, people were confined to these machines for weeks or months, but some people had to live the rest of their lives in one because their bodies were so paralyzed. I am grateful that the polio vaccine was made available in the US in 1955, the year I was born. Polio was completely eradicated in the US by 1979. Vaccines save lives, whether its polio or influenza or COVID-19. 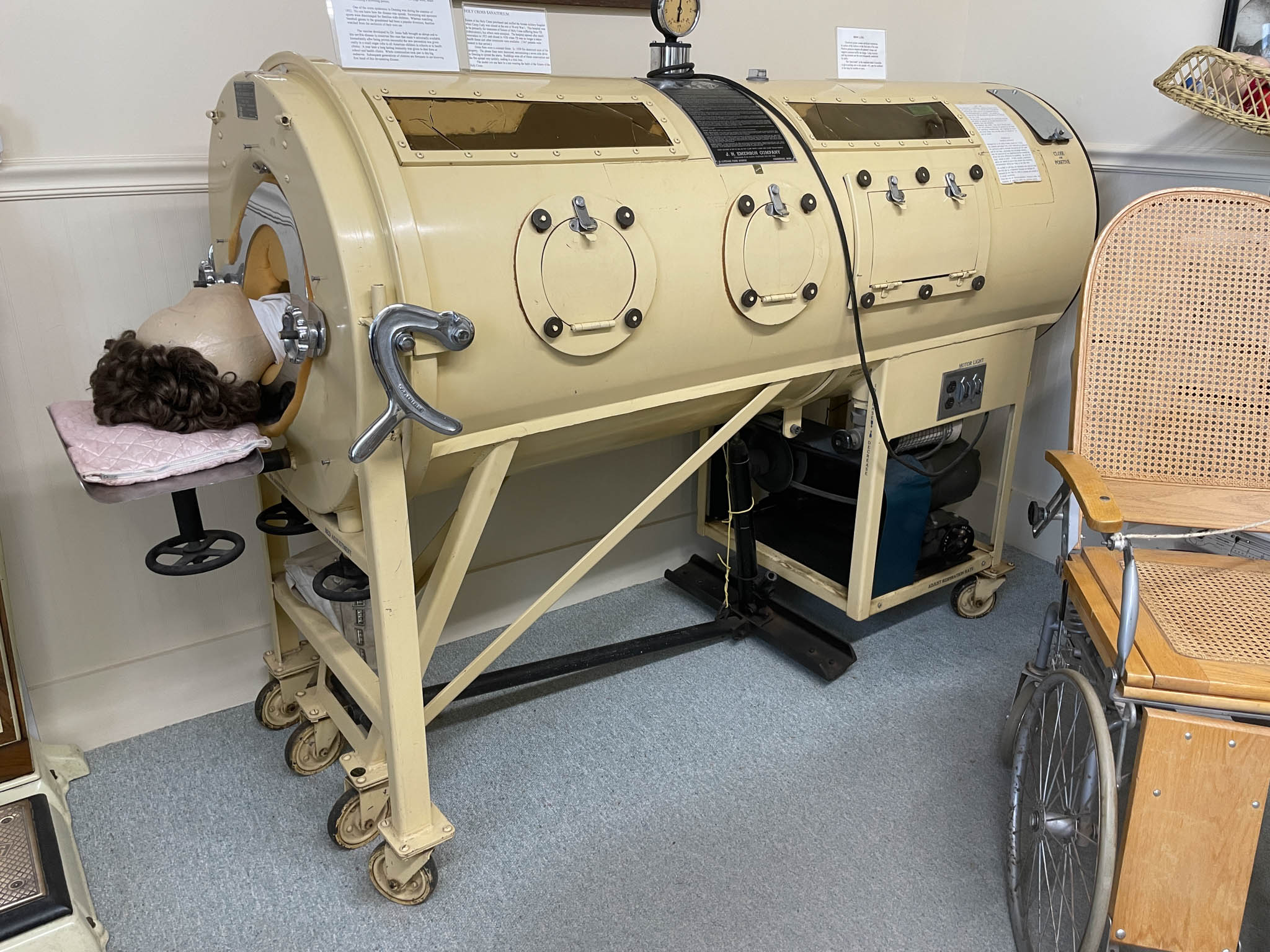 My most most favorite thing in the museum was also the most unexpected: a copy of Playboy magazine in Braille. I have no idea how the centerfold was handled in this issue and the display didn’t have any hints. I never would have thought a museum in the middle of the southwestern US would feature a vintage Playboy for visually-impaired people, but sure, why not? 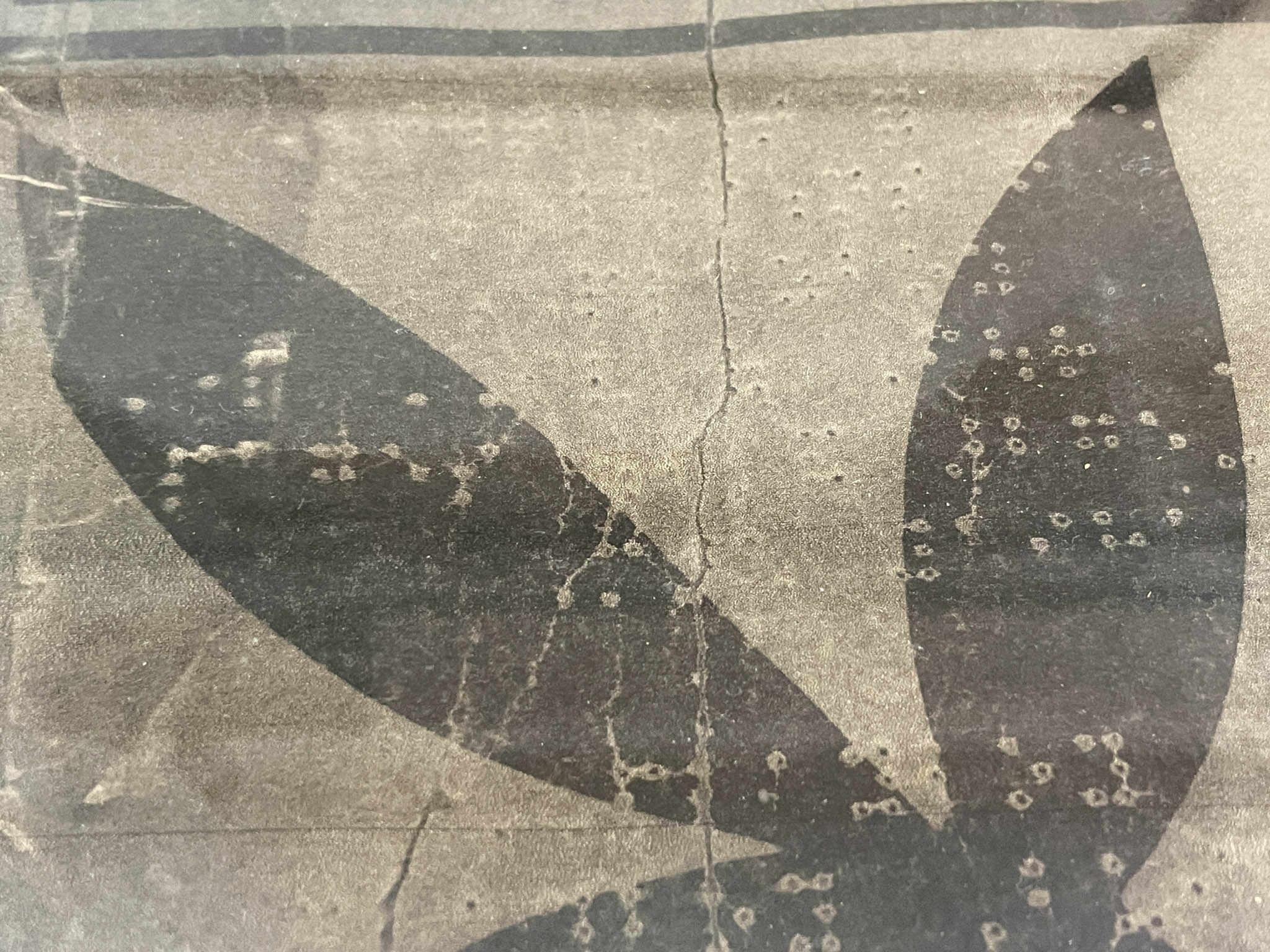 This museum clearly has something for everyone. Which is why you should go visit next time you’re passing through Deming, New Mexico.

Don’t go to a museum with a destination. Museums are wormholes to other worlds. They are ecstasy machines. Follow your eyes to wherever they lead you…and the world should begin to change for you.