You can guess that it’s going to be an interesting drive day when the scenery looks like this and you haven’t even started climbing the mountains yet. Welcome to Colorado in mid-October, the state that just loves to dump snow on me. 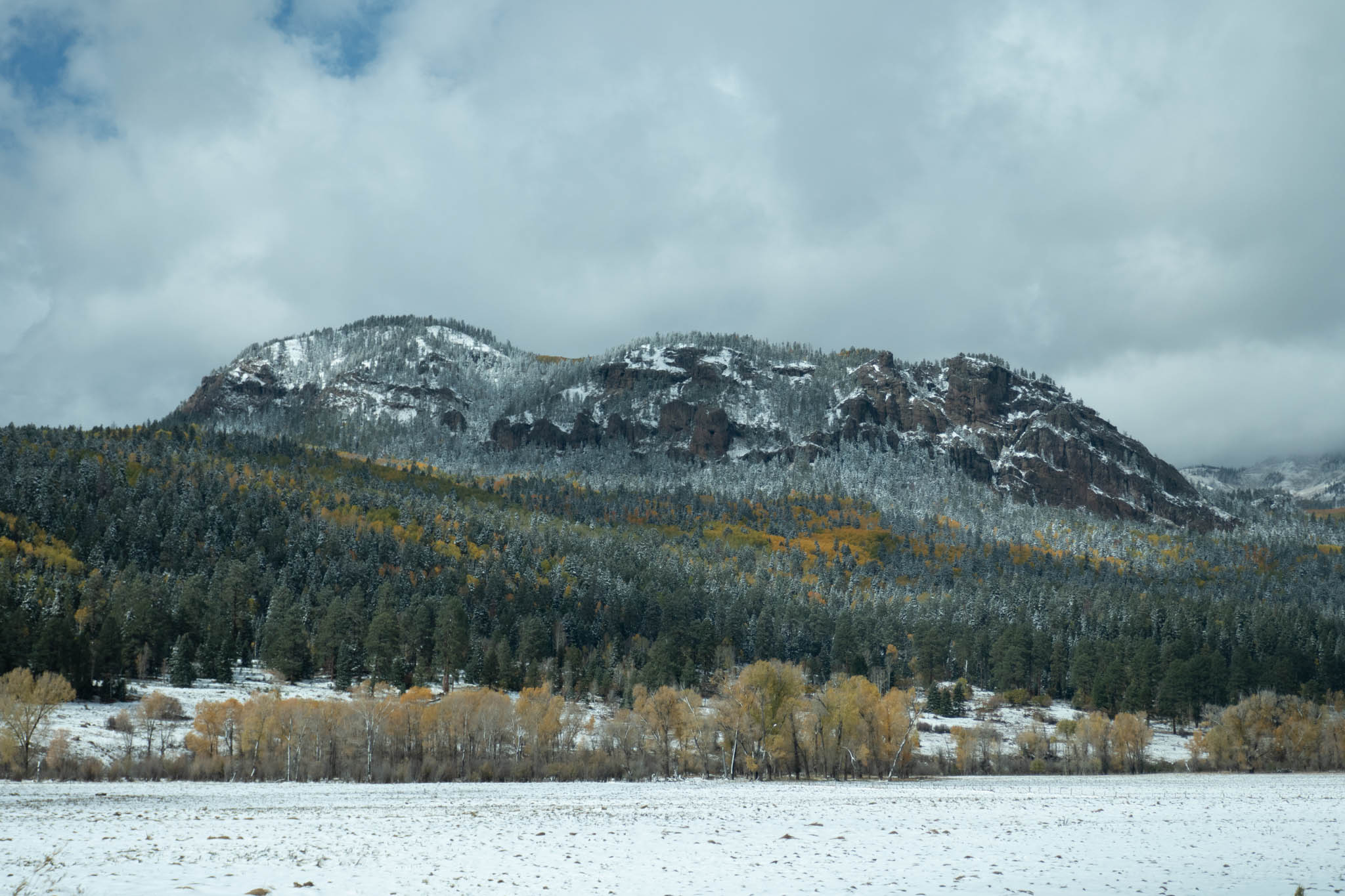 After hunkering down in Bluff, UT for two days to avoid the first winter storm of the season, I spent another night outside Durango, Colorado, waiting for the roads to clear. And then it was off to Alamosa, CO and a KOA for the night.The views through the mountains were, uh, snowy. The road was indeed clear of ice and the white stuff and it was also pretty clear of traffic, too. The Ridgeline did well towing the Alto, and we stopped at Wolf Creek Pass, elevation 10,856 feet, to do a little victory dance and stand on the western Continental Divide. 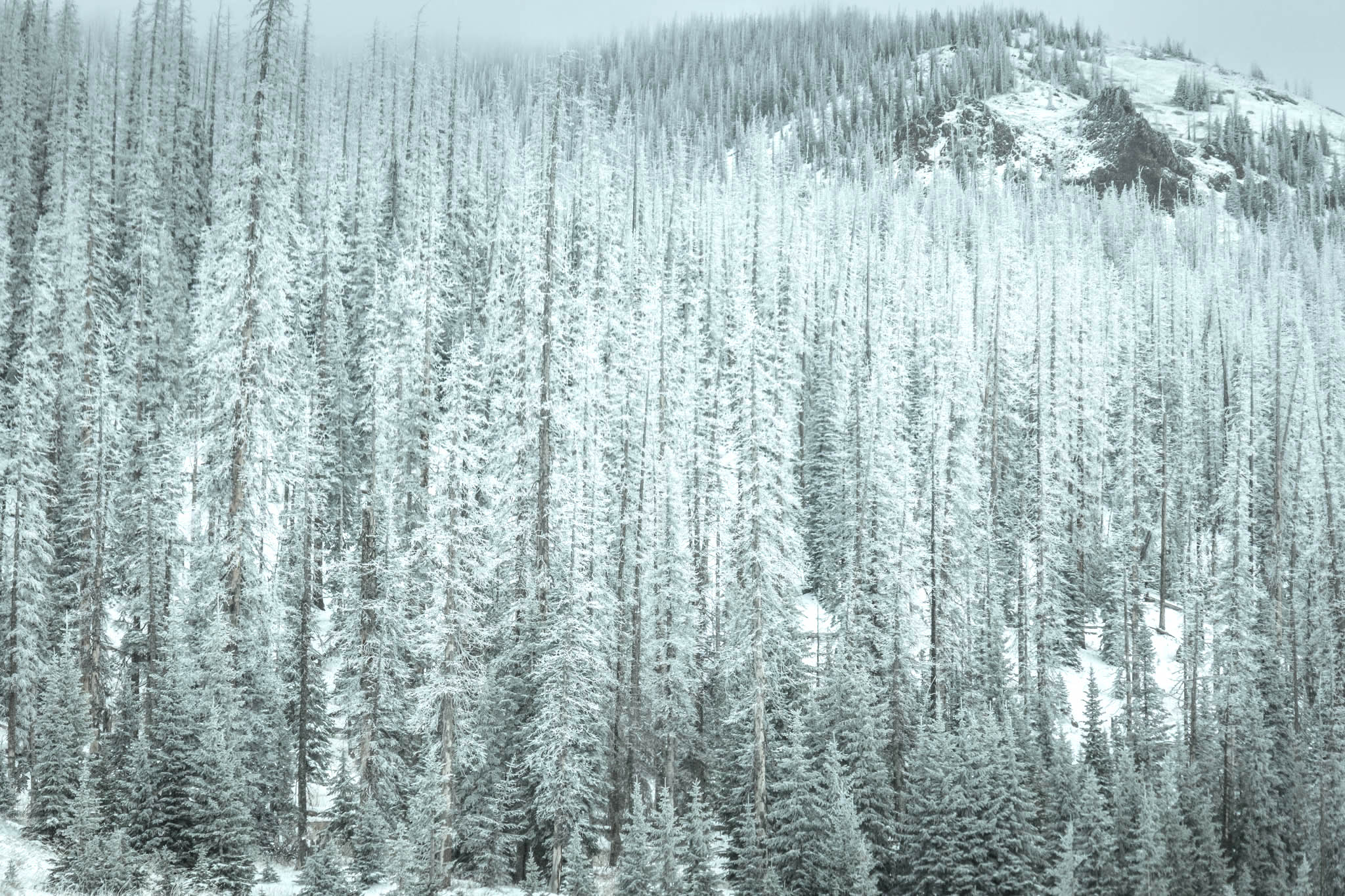 I had debated going directly from Durango to Salida, where I was meeting friends for a week at an airbnb, instead of stopping over in Alamosa. But, the forecast looked like the storm was a slow mover on radar. As I came down the east side of the San Juans, I could see the storm clouds off to my left, directly between me and Salida. Good call on the Alamosa stop, then.

The next morning, the weather forecast turned out to be slightly off. Instead of the predicted low of 25F, it was 15F and the water in my pipes had turned to slushy stuff somewhere between tank and faucet. I opened up the compartment where the water pump was and blasted the heater, along with using a hair dryer to direct a steady stream of hot air to the poor little thing. I couldn’t see that any pipes had actually burst, so I figured time and (slightly) warming temps outside would resolve the problem in a few hours. Meanwhile, I got underway, having pulled out the fleece hat and lined leather gloves to do my hitching up and departure chores. 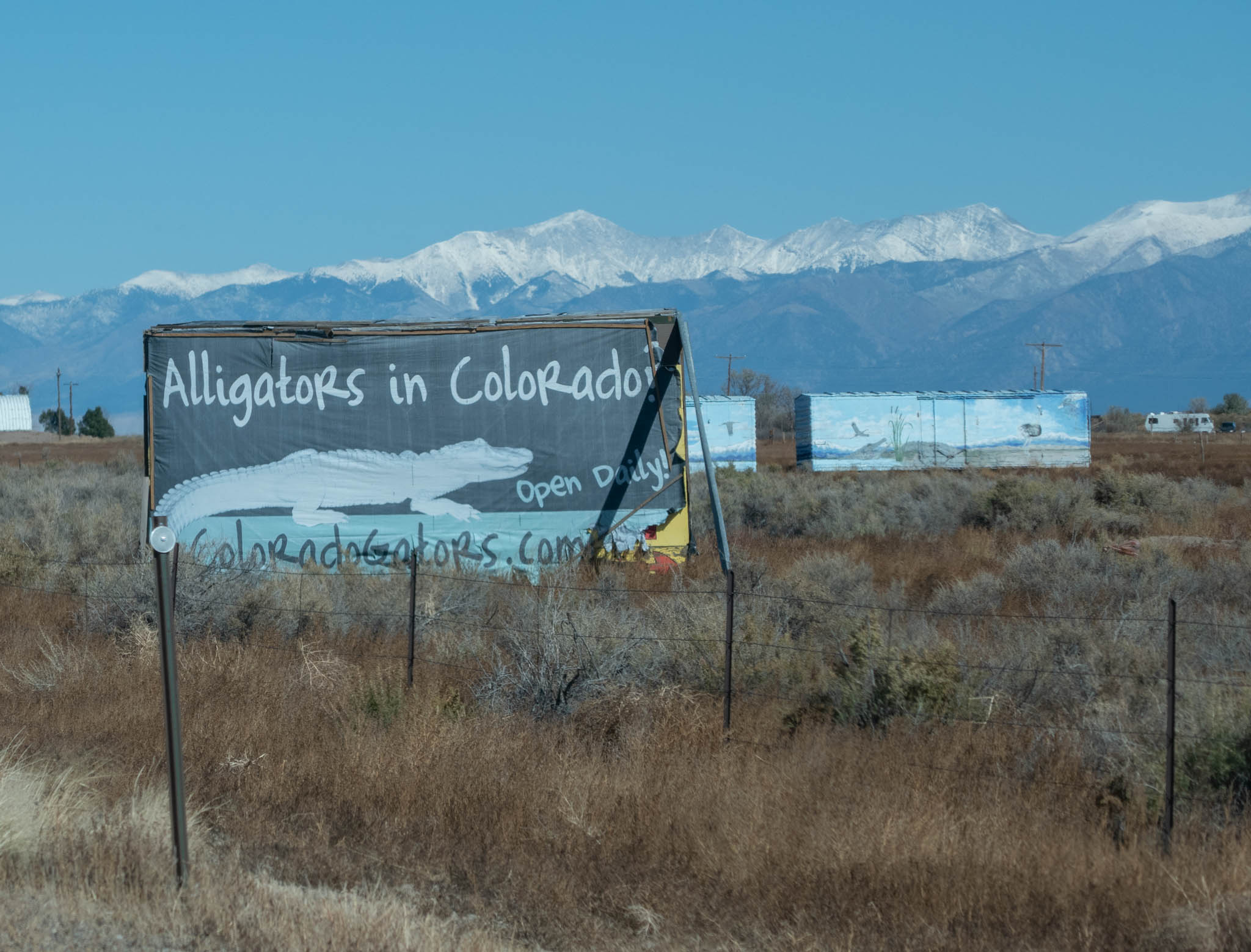 By the time I passed this sign, the pipes had thawed and water was once again flowing freely. Man, that was a cold night! As for the sign, it’s real enough. And, no, I didn’t stop because I have had enough of alligators in Florida. I don’t need to see one in Colorado! 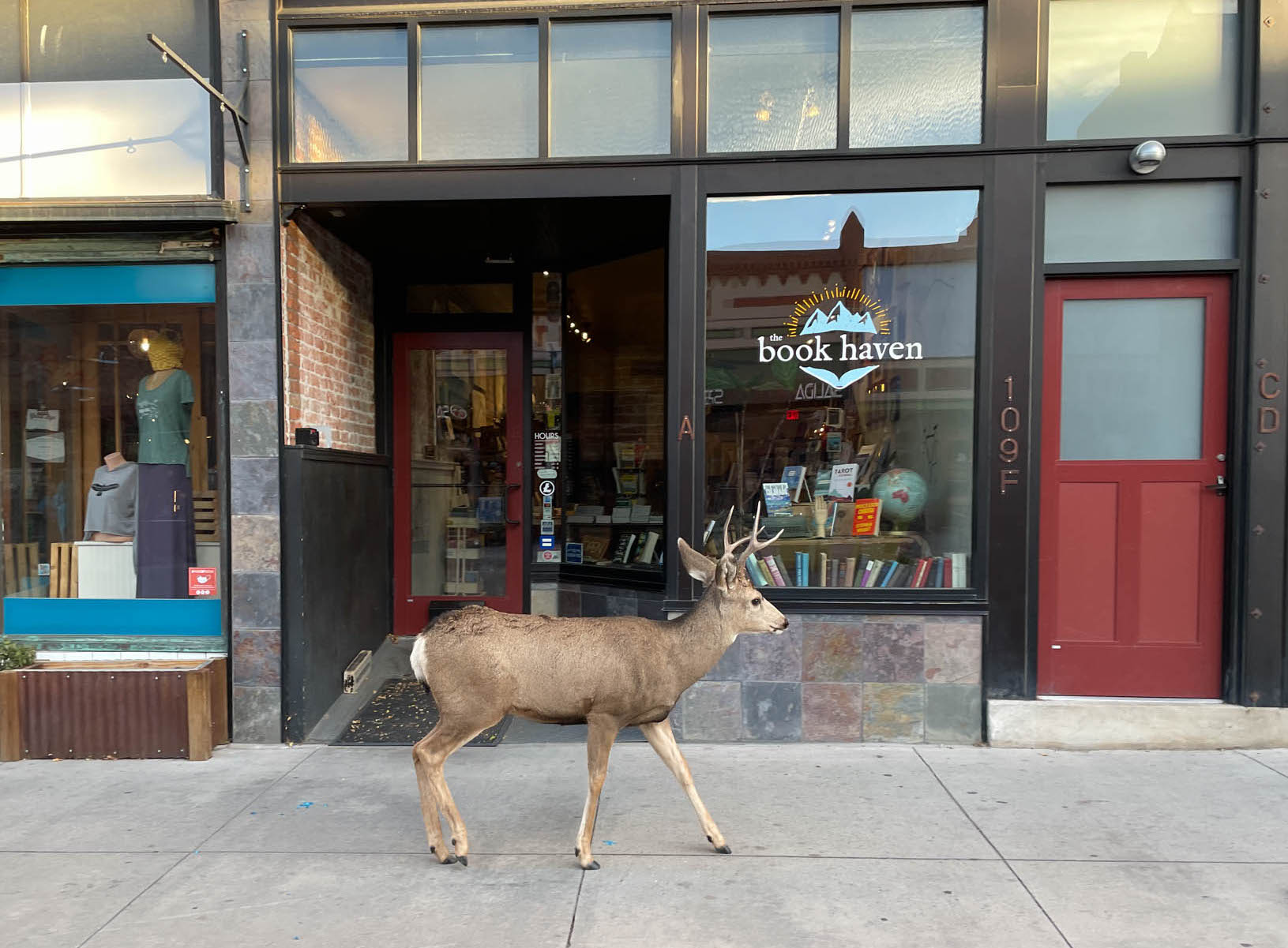 The town of Salida was a delight, from the independent bookstore to the deer that kind of owned the main drag. This one nicely pranced in front of the bookstore, so consider this a two-for-one shot of the Salida highlights reel. 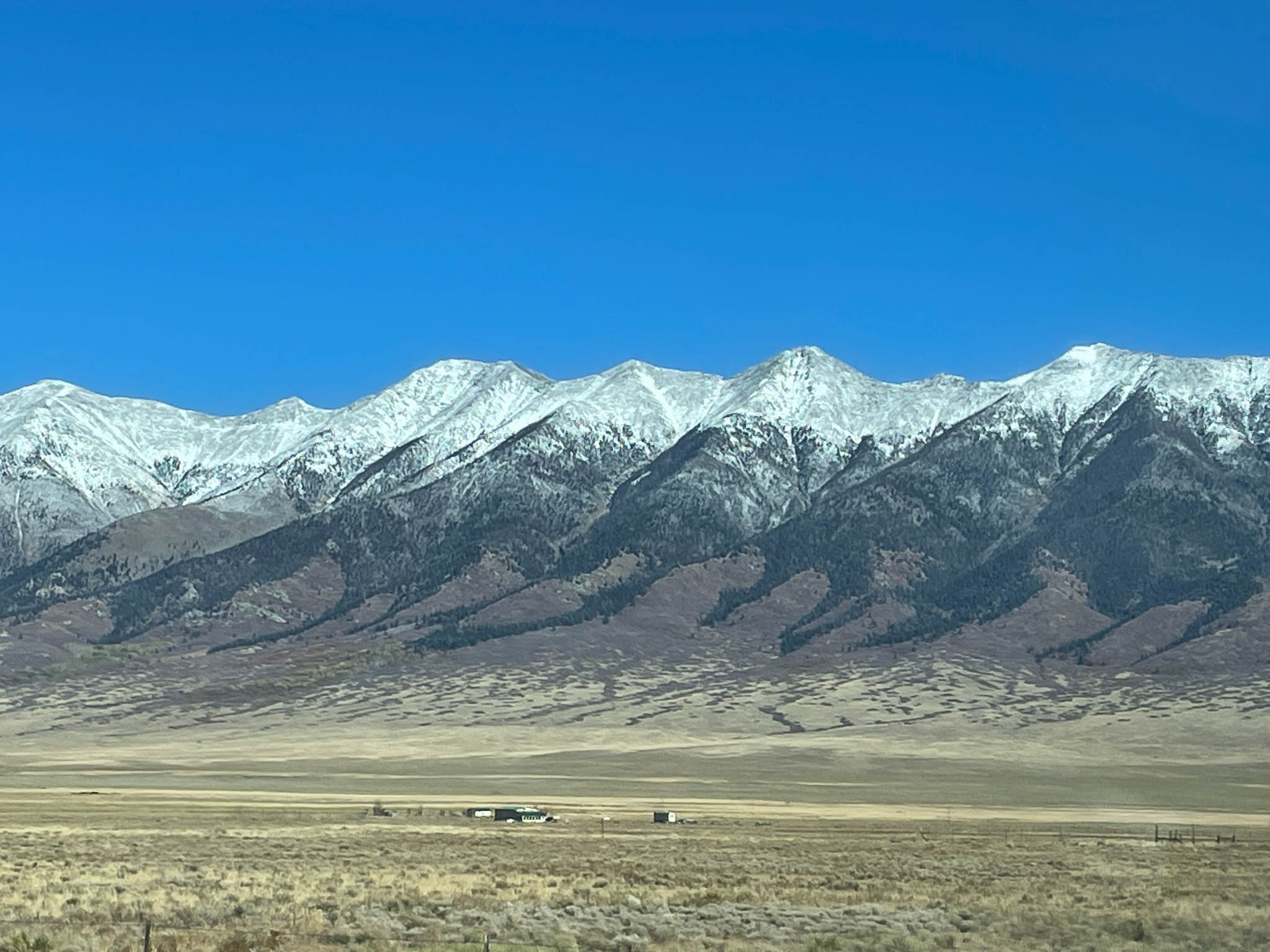 One day, my friends and I drove south about 45 minutes to a day spa with hot springs and massages. Oh, boy, was that a great treat! I had a hot tub to myself for more than an hour and became a noodle of clean, soaked skin, relaxed and happy. Then I had one of the best massages of my life. It was so good I drifted off into another state of being more than once, which has never happened before but it was quite amazingly cool.

Oh, and this guy was hanging out on the patio where I sat in the sun for a while. Stick insect dude, you were so chill. I was too, because those snowy mountains in the photo above were my view from the patio. Joyful Journey Hot Springs Spa, if you’re ever in the area. Well worth the drive. 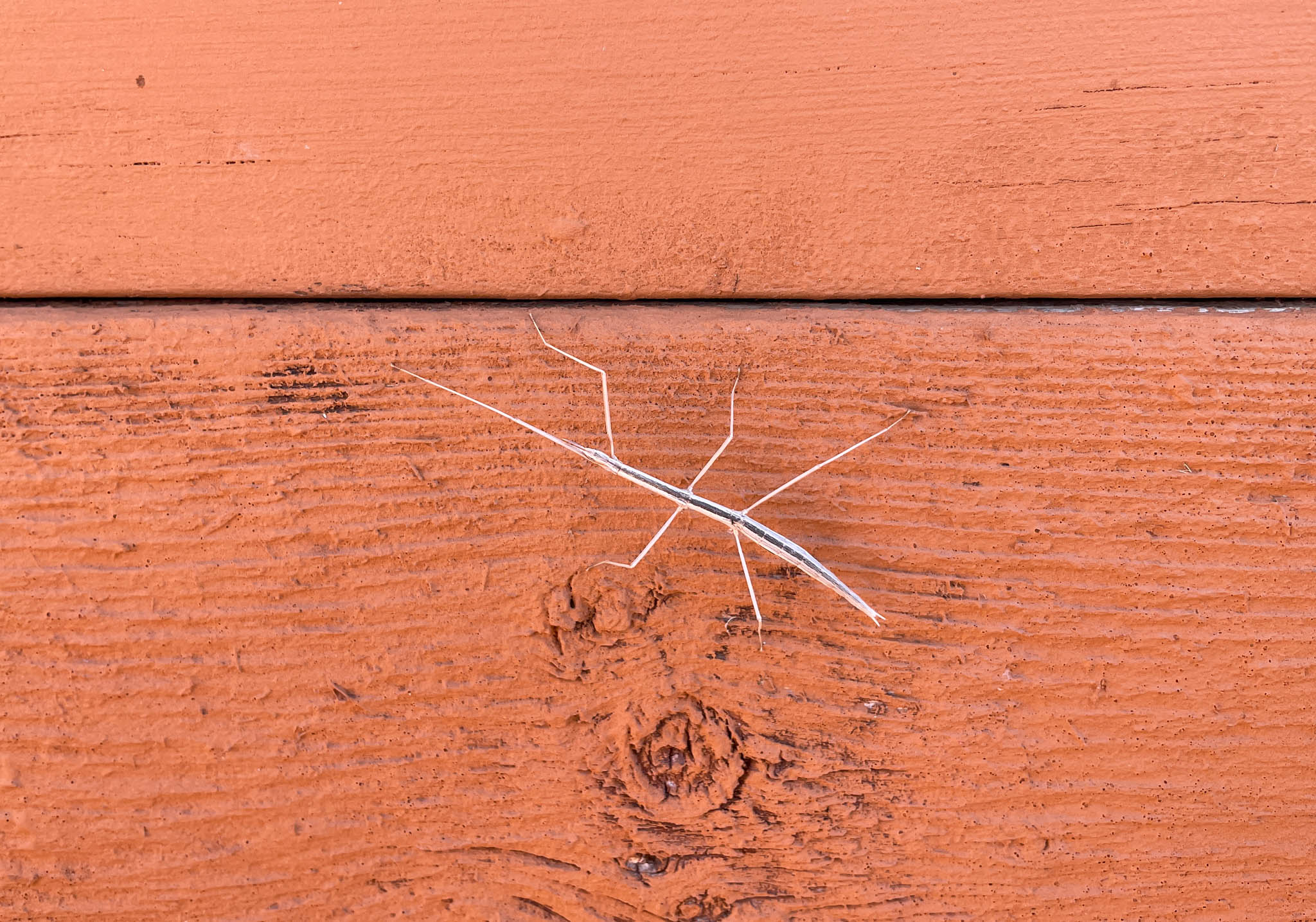 After the week in Salida, I stopped for a few nights on my way out of Colorado at the always wonderful Trinidad Lake State Park. And then I went off to revisit the K-T Boundary that I first saw in 2017 after a geologist friend had told me about it. See that light layer near the top of the image below? That was laid down 66 million years ago by the asteroid that killed most of the dinosaurs and plant species. 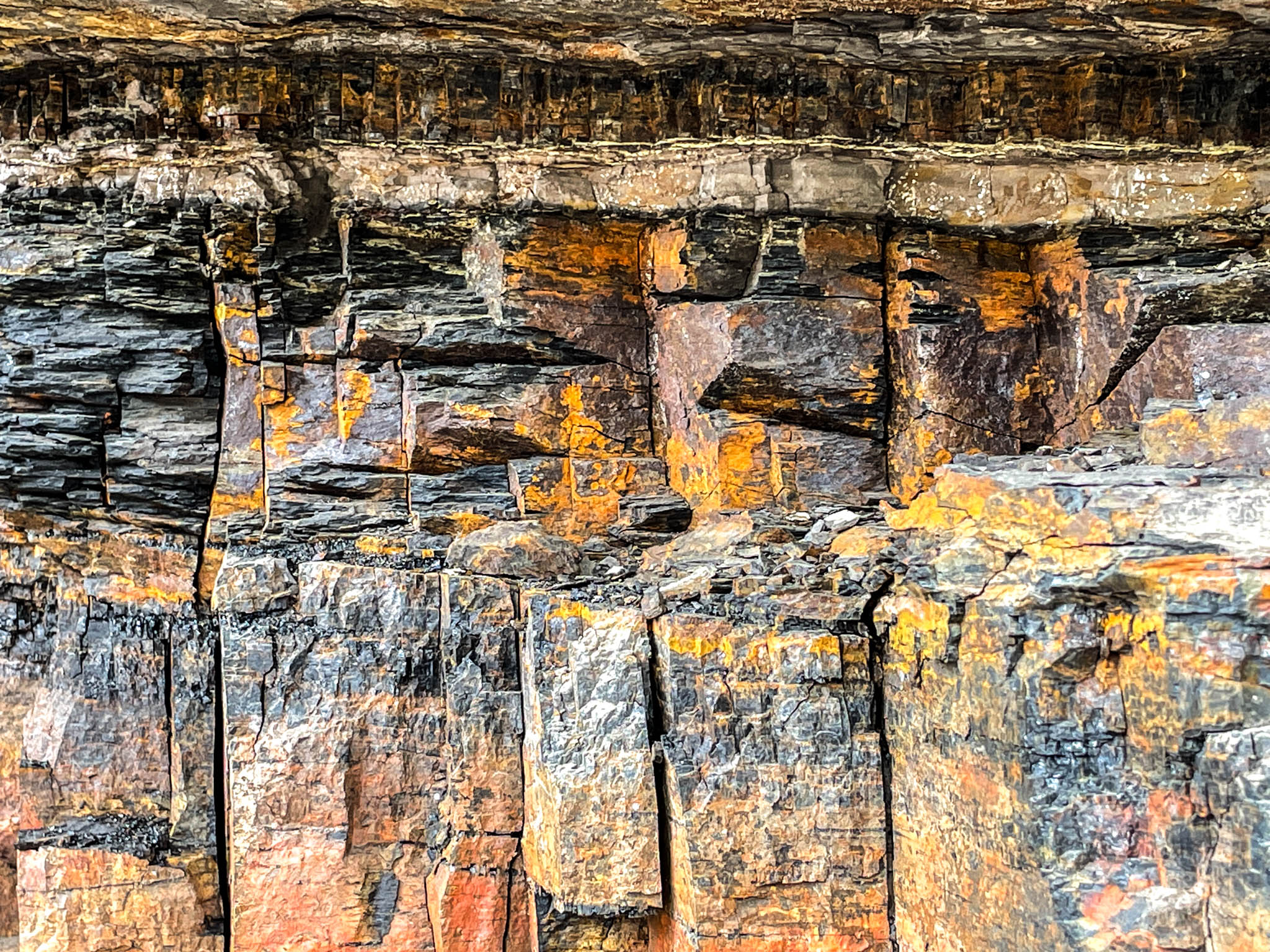 In most places on earth, this thin layer is miles below the surface. Here, just a few miles from the CO-NM border, you can actually see it. Scrambling up side of the road to touch something that is 66 million years old fills me with wonder at the amazing things this planet has been through and the miracle of time and evolution that is it and us.

And with that, it was time to leave Colorado behind and head south for the winter.

What is that feeling when you’re driving away from people and they recede on the plain till you see their specks dispersing? – it’s the too-huge world vaulting us, and it’s good-bye. But we lean forward to the next crazy venture beneath the skies.

Jack Kerouac, (On the Road)