I grew up going to Arizona, mostly the eastern part where my dad’s family was from, but we did make it to the Grand Canyon a few times. The South Rim, that is. Visiting the North Rim, then, was a new experience for me, and one I really enjoyed. Let’s just say it is WAY different than the South Rim, from smaller crowds and less traffic to broader views and, most importantly, a sense of wildness. The North Rim campground, run by the National Park Service, is a great base of operations for exploring the area. No hookups, and solar sites are rare, but the sites are spaced well apart from each other, it’s quiet most of the time, and it’s really dark at night. I loved it. The Transept Trail runs from the campground to the Grand Canyon Lodge, giving amazingly closeup views of Transept Canyon (photos above and below). While part of the beauty of the Grand Canyon is the vast expanse of it, I found it just as mesmerizing to study one canyon at closer range. From sunrise to storms to clear days, this canyon was a delight. 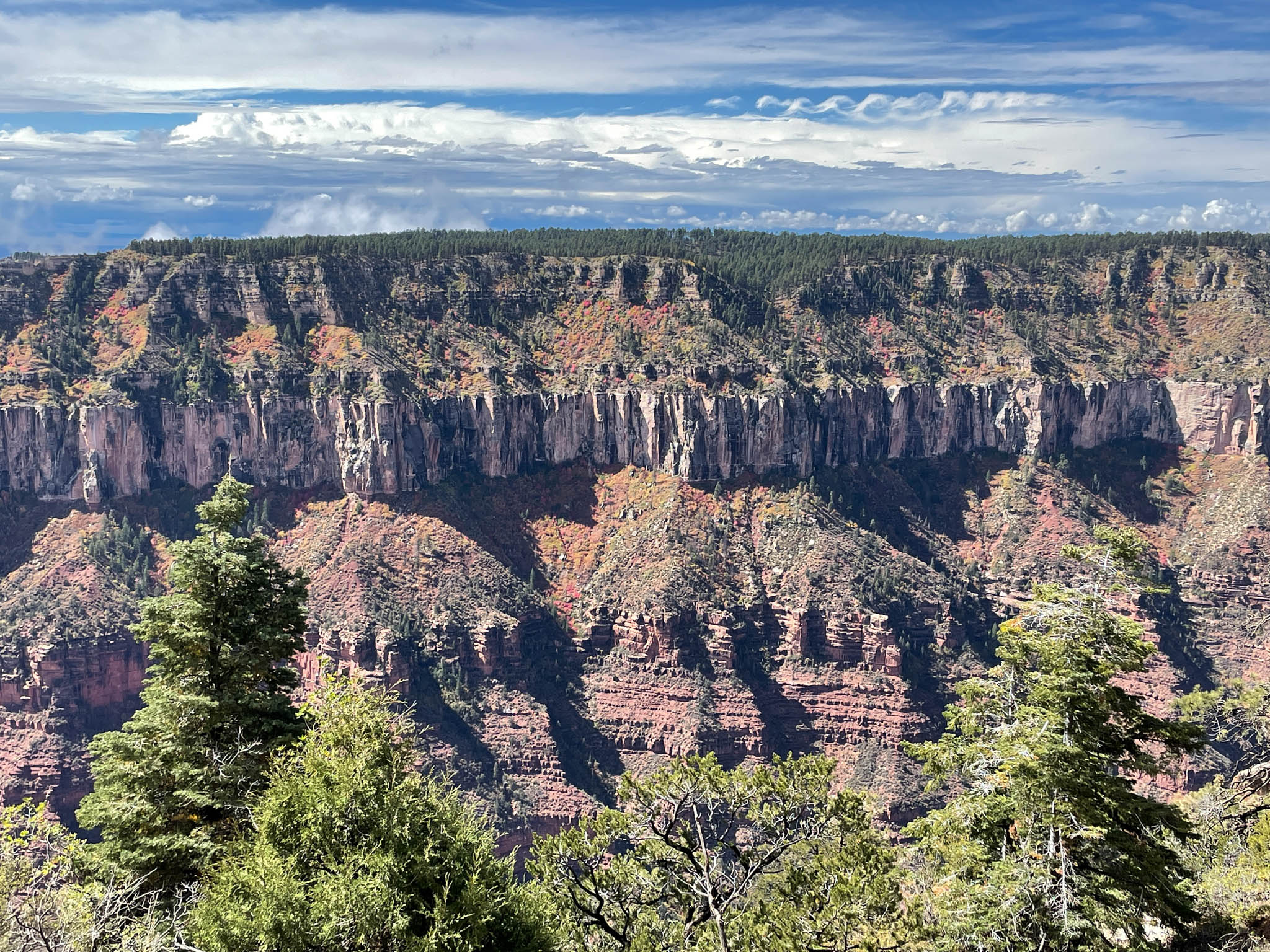 I did do some driving explorations, one to Cape Royal and one to Point Imperial. The photo below is one of those classic Grand Canyon expanses, with the Colorado River at the bottom, taken from the Angel’s Window overlook on the Cape Royal trail. 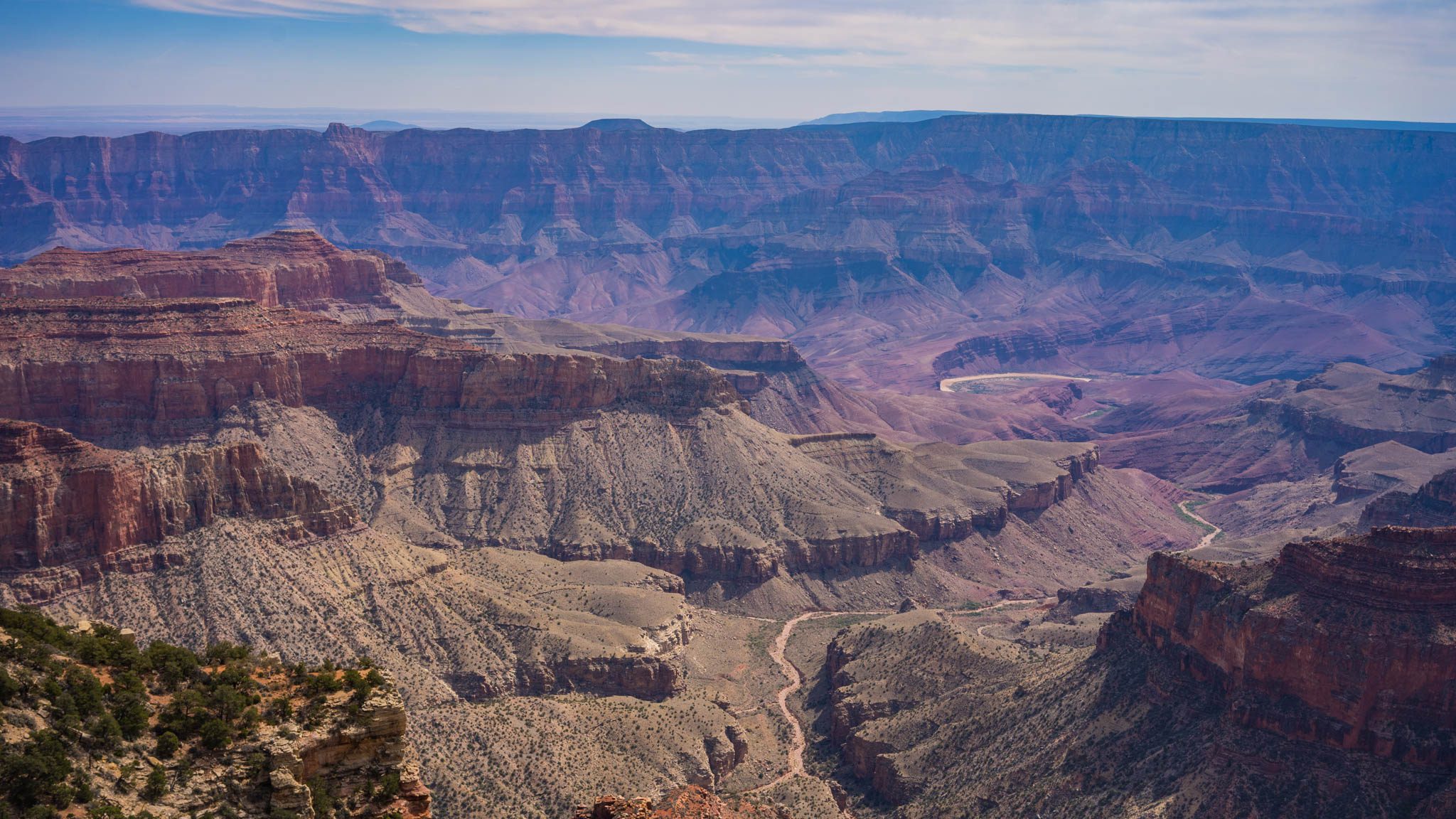 As I was traveling this past summer, I was also reading the book Leave It As It Is by David Gessner. It looks at Theodore Roosevelt’s role in establishing the first National Parks and why wilderness mattered then and why it matters even more now. So, of course, I had to visit Roosevelt Point and take a hike on the very short (0.2 miles) TR Trail.

I found myself completely alone on the trail, staring out at this view. I could see for miles to the east and south, not a single other soul in sight. No sign of human habitation either. Just me and the canyon, and millions of years of time exposed by wind, water, and uplift. The history of our planet was right there, in each canyons and layer.

Humans? We don’t show up until the very top of the top-most layer, less than 1% of the time Earth has been here. We’re such a small part of history and yet we think we’re so important. Realizing that everything I could see was millions and millions of years old, except me, was a transformational moment, in ways I can’t yet find words to describe. All I know is since that moment, I’ve been less anxious about day-to-day things like campsites and routes and money. I’m just a little smudge of life, sitting on top of millions of years of life on Earth that existed quite well without me in the picture. 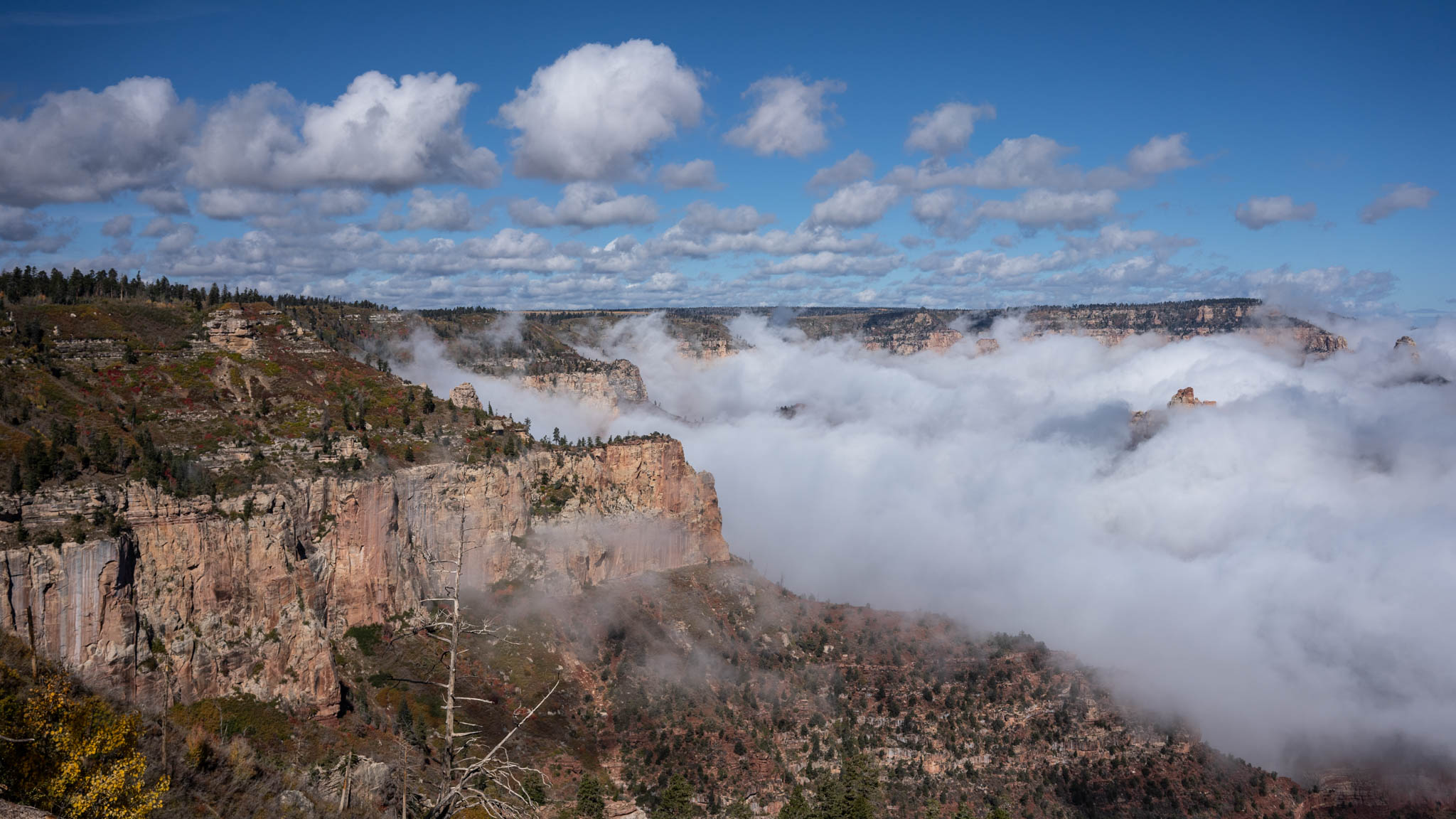 I went back two days later to the TR Trail, only to be clouded out by the weather. I’d learned my lesson here though, so I didn’t need to see that vast view again.

My last day at this spot, I woke up early, dressed in the cold and dark, and headed to Bright Angel Point. Although the day before had been cloudy and foggy, I was somehow convinced that there would be an awesome sunrise. I wasn’t the only one who was an optimist that morning; there were already a few dozen people settled into spots along the trail waiting for the main event to begin. 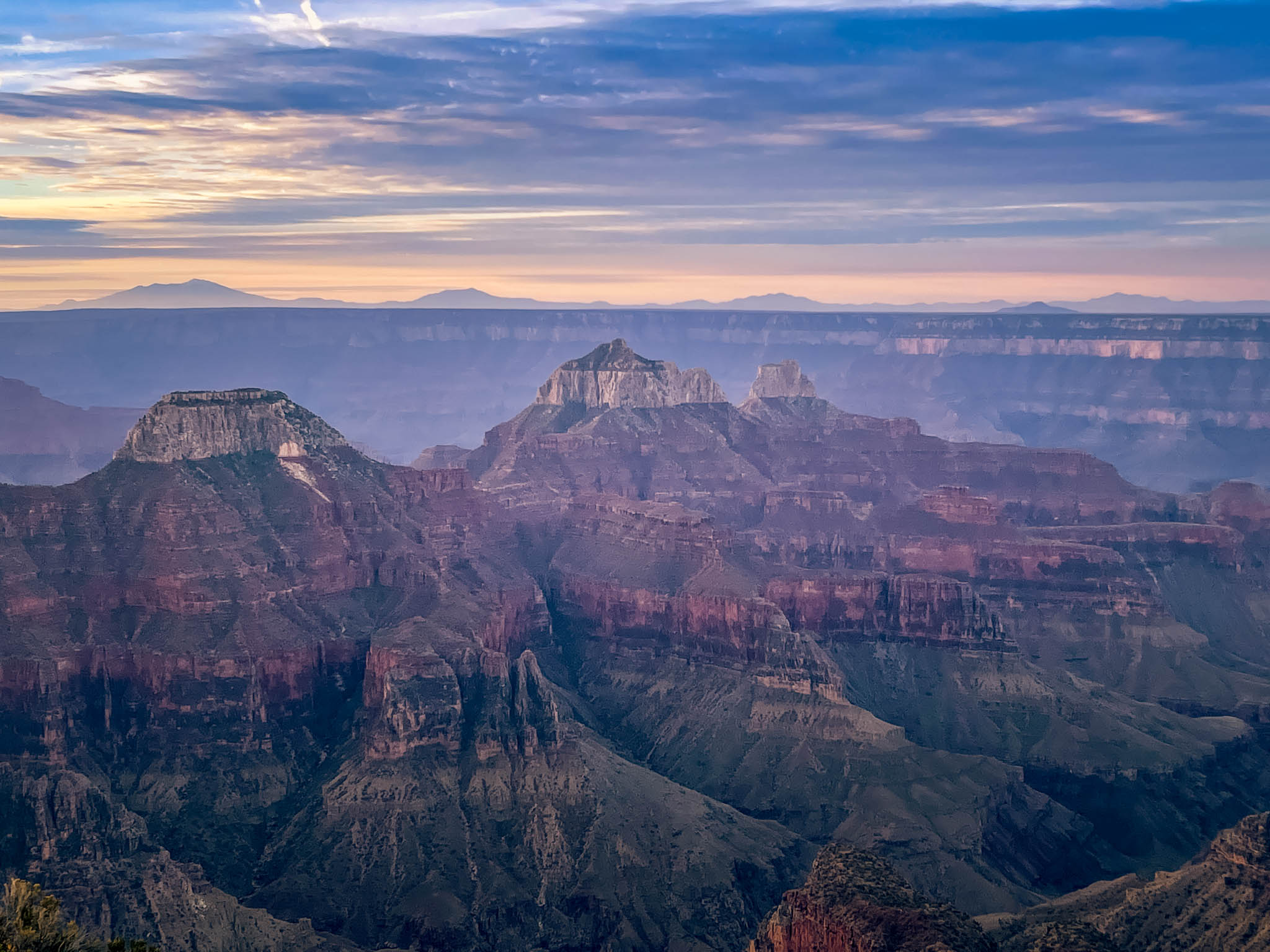 This visit was a completely different experience from my afternoon visit to Bright Angel trail the day I first arrived at the North Rim. Then, it was hordes of people, including some who insisted on taking strollers and dogs on the narrow trail, and it was hard to feel the magic of the Canyon. 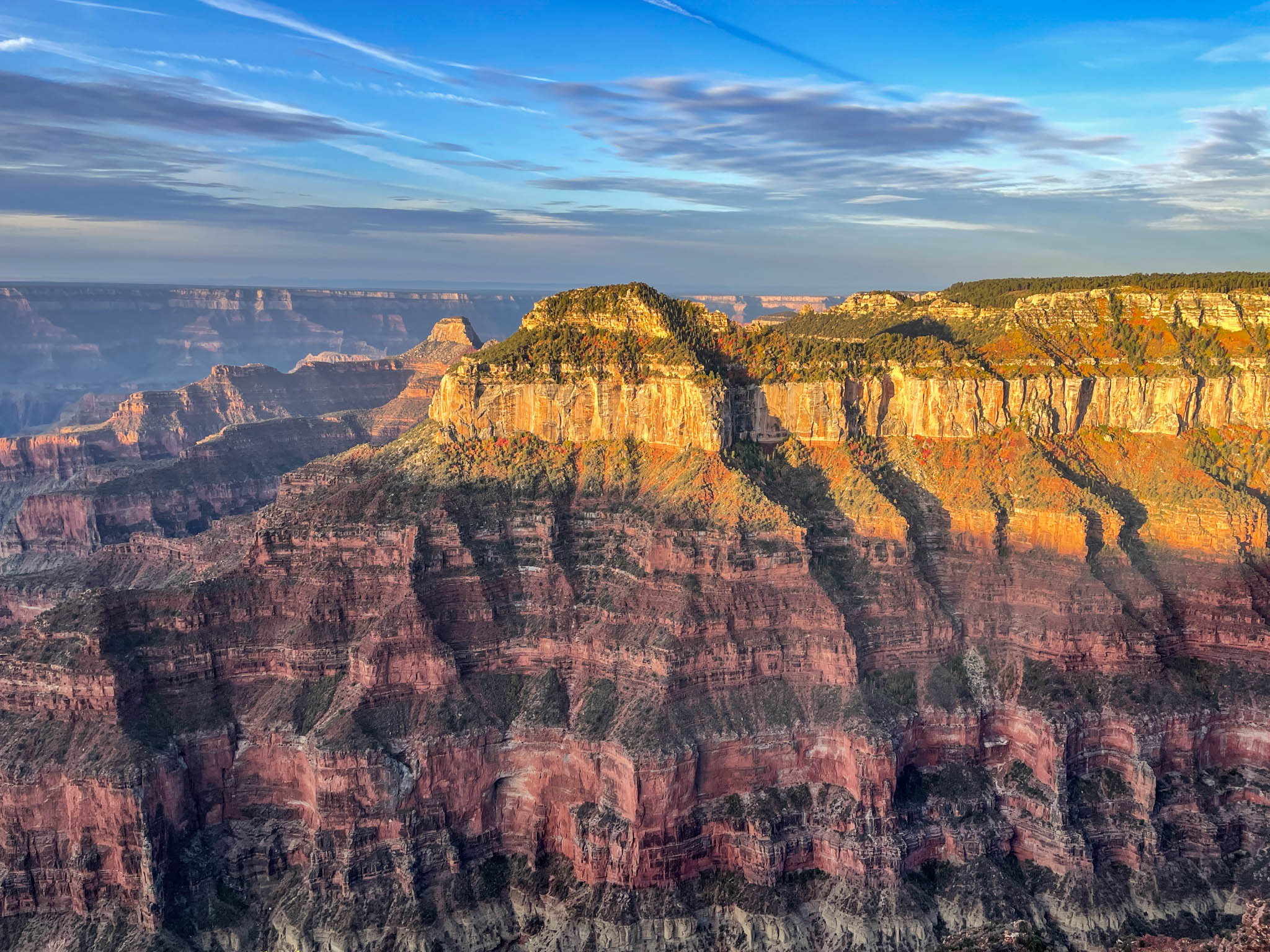 This early in the morning, It was mostly silent with a few murmurs now and then, all of us turned eastward, as if waiting for a sacred ceremony to begin. And maybe that’s what it was, that small moment when the first rays of the sun signal the arrival of a new day. As the sky lightened from black to deep blue and the colors of the canyon slowly shifted from dark purples to rose pinks and warm yellows, we stood silent in wonder, much as the first humans here probably did. It was the perfect way to start a day and it was also a fitting end to my visit to the North Rim.

President Theodore Roosevelt established the Grand Canyon National Monument in 1908. It wasn’t until 1919, though, that Congress elevated the area to become Grand Canyon National Park. Of all the places in the US that have been protected from development by the Antiquities Act and by Acts of Congress, this might be the most important, for so many reasons, from establishing the concept of wilderness preservation to geological and paleontological research.

Humans have inhabited this area for more than 13,000 years. As with most other places I visited on this trip, the Ancestral Puebloan people lived here first, leaving behind a treasure trove of sites and artifacts.

The landscape of Grand Canyon National Park ranging from 1,840 to 270 million years old, and features paleontological resources; a complex tectonic and erosion history; and Pliocene to Holocene volcanic deposits. The Colorado River worked its way through the landscape around 6 million years ago.

Here’s a good summary of the rock groups and layers at the Grand Canyon, from the NPS web page Telling Time at Grand Canyon National Park. 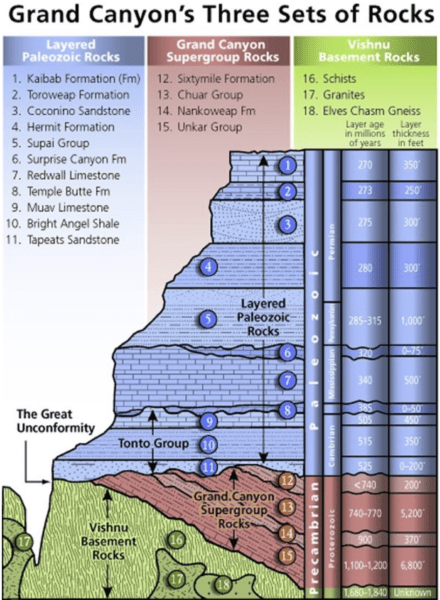