I did not expect much on the 142-mile drive from Arches National Park to Capitol Reef National Park. On Google Maps, I-70 to Highway 24 just looked like a whole lot of desert. Having survived a childhood of being driven all over the Arizona desert visiting family, I wasn’t expecting much. Wow, was I ever wrong. And never more happy to be wrong! 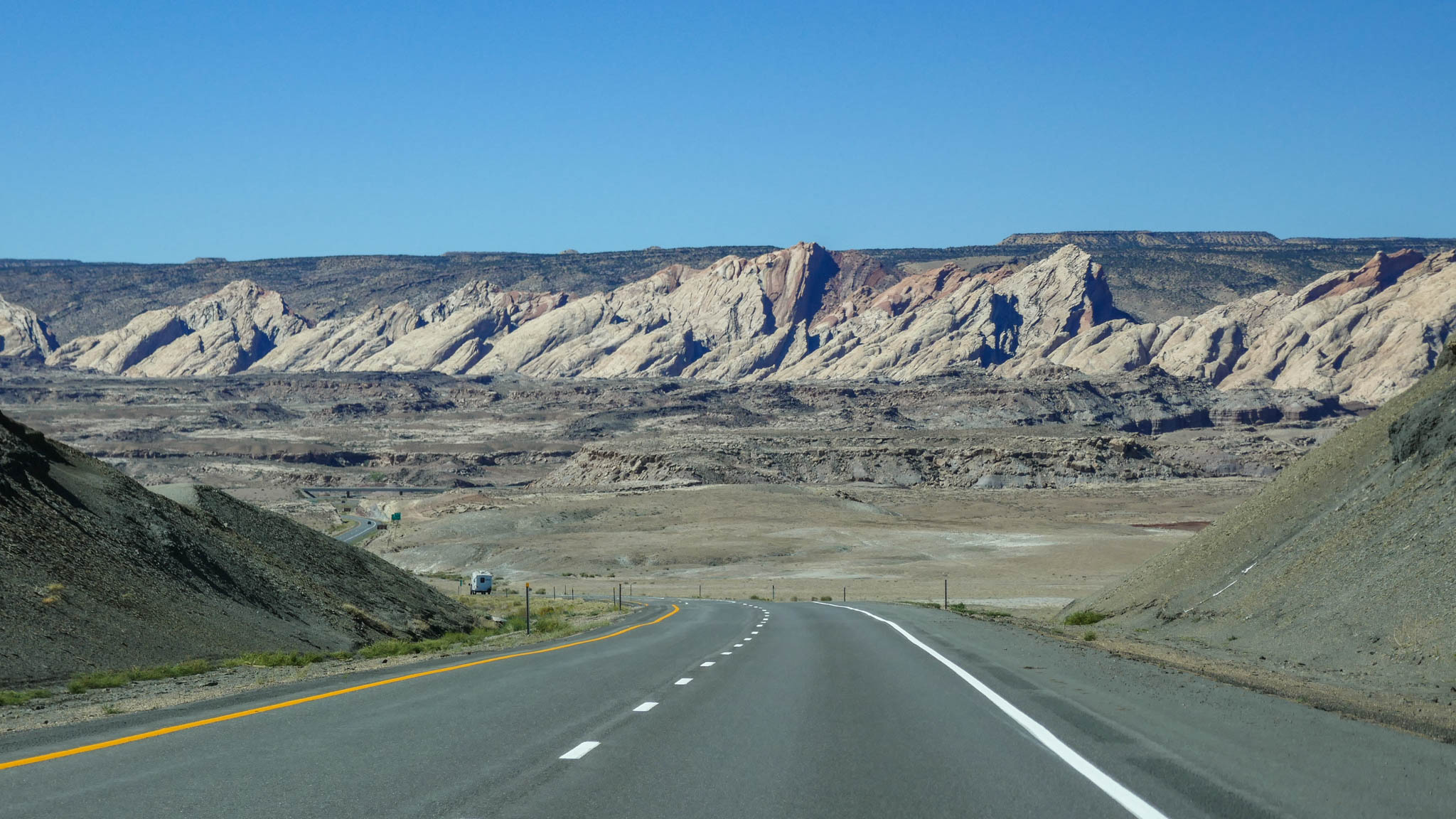 Coming down I-70 west out of Green River (which is a solid gas stop, by the way), I saw the first taste of things to come. Meet the San Rafael Reef, the eastern edge of the larger San Rafael Swell. Just look at those crazy uplifts!

A quick look at Google Maps in satellite view clearly shows the line of those rocks, as if someone put a hard stop on their path. The geology along here is fascinating. The San Rafael Reef, a hogback formation consisting of layers of Navajo and Wingate Sandstone, is 75 miles of deeply eroded cliffs, domes, and canyons.

I got off the interstate highway onto Highway 24, the road that eventually goes through Capitol Reef. There were several miles of odd formations sticking up out of flat desert land (see the cover photo at the top of this post). And then, after a right turn at Hanksville, things got even more amazing.

Meet the South Caineville Mesa, a beautifully colored formation that dominates the landscape south of Highway 24 for several miles. The Gray Cliffs (part of the Grand Staircase) are Mancos Shale, from the Late Cretaceous period (100-66 million years ago). 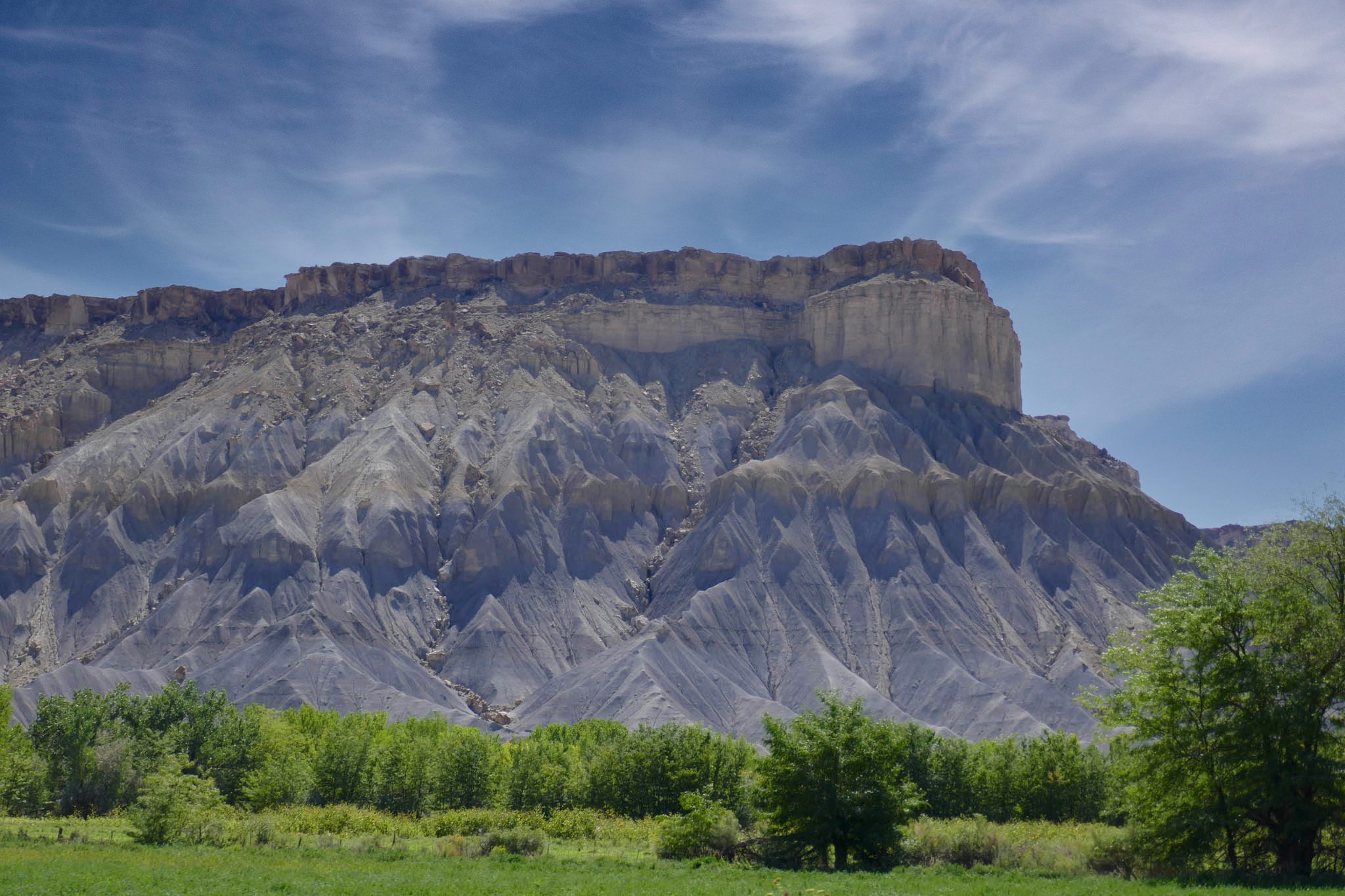 The beige parts were actually represent shoreline back then. They were part of the Western Cretaceous Interior Seaway, which covered eastern Utah and eventually connected the Artic Ocean and the Gulf of Mexico. Palm trees were quite common in the coastal plains next to the Seaway, which is where the coal in this area came from. Trying to get my head around this desert being underwater with swaying palm trees off to one side kind of blows my mind.

The North Caineville Mesa, just across the highway is quite good, too. Same rock formations and time period, just a modern two-lane tarmac separating them. Both of these mesas were formed as part of the Sevier Orogeny, which built mountains from Mexico to Canada and created that massive Seaway. 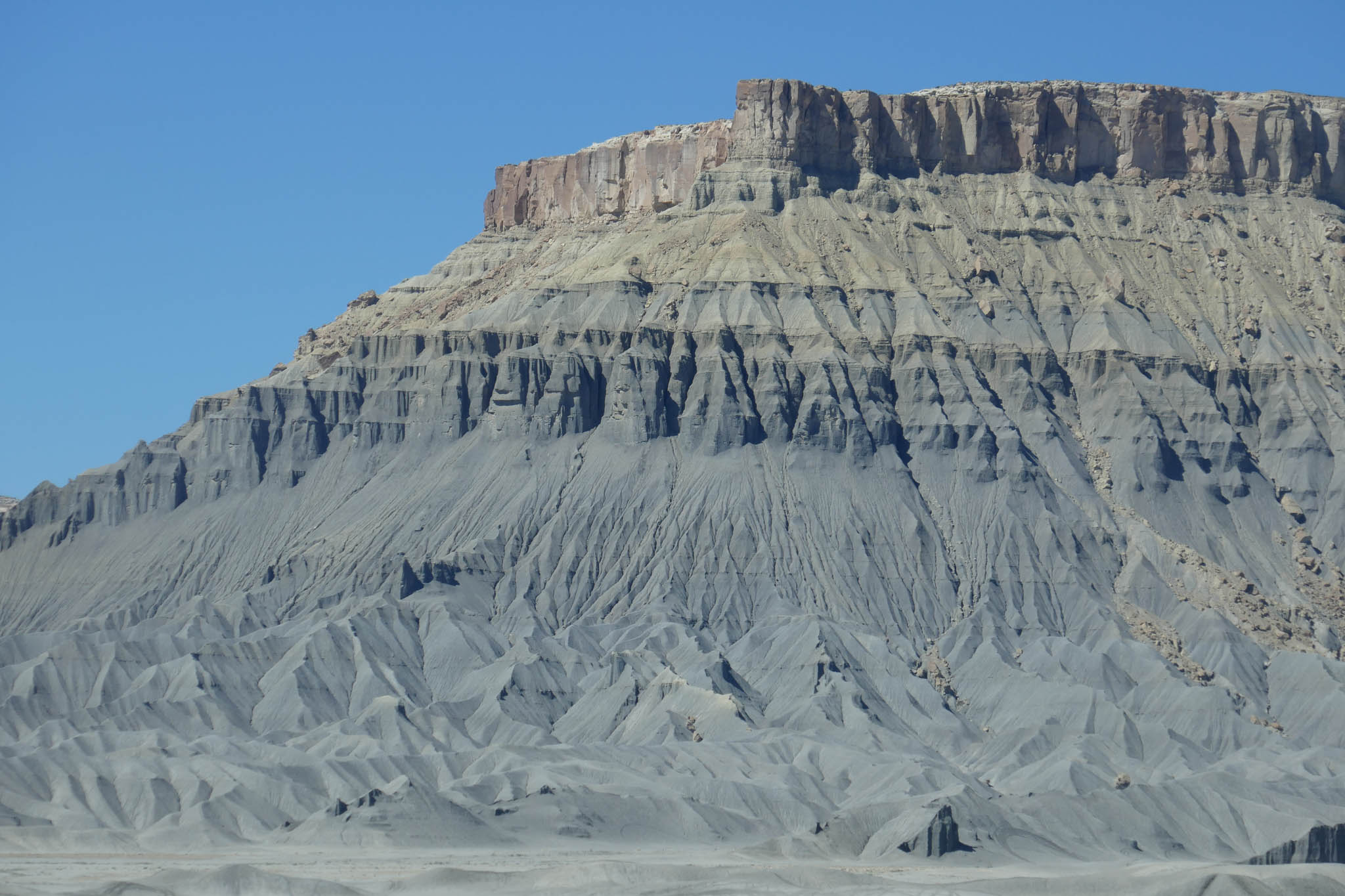 The geology is a long, complicated story, and it’s totally interesting to me. Sometimes, I just have to look at the play of light on the rocks and appreciate the beauty of it all. 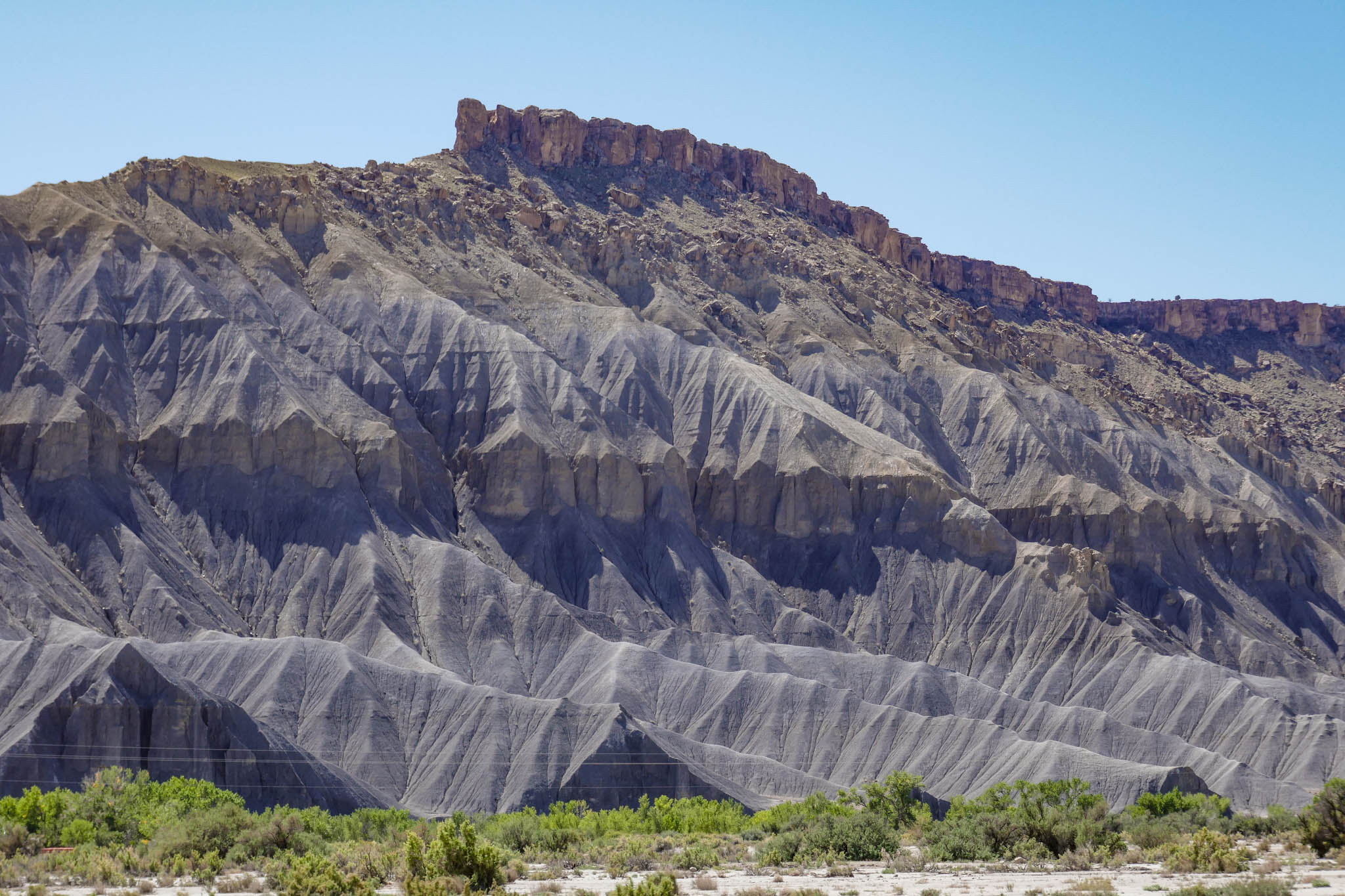 And the details are cool, too. This is one section of the North Caineville Mesa, where some rocks have eroded and some obviously have not. And you can also see the layering from a different perspective, this time in foreground and background (upper right). 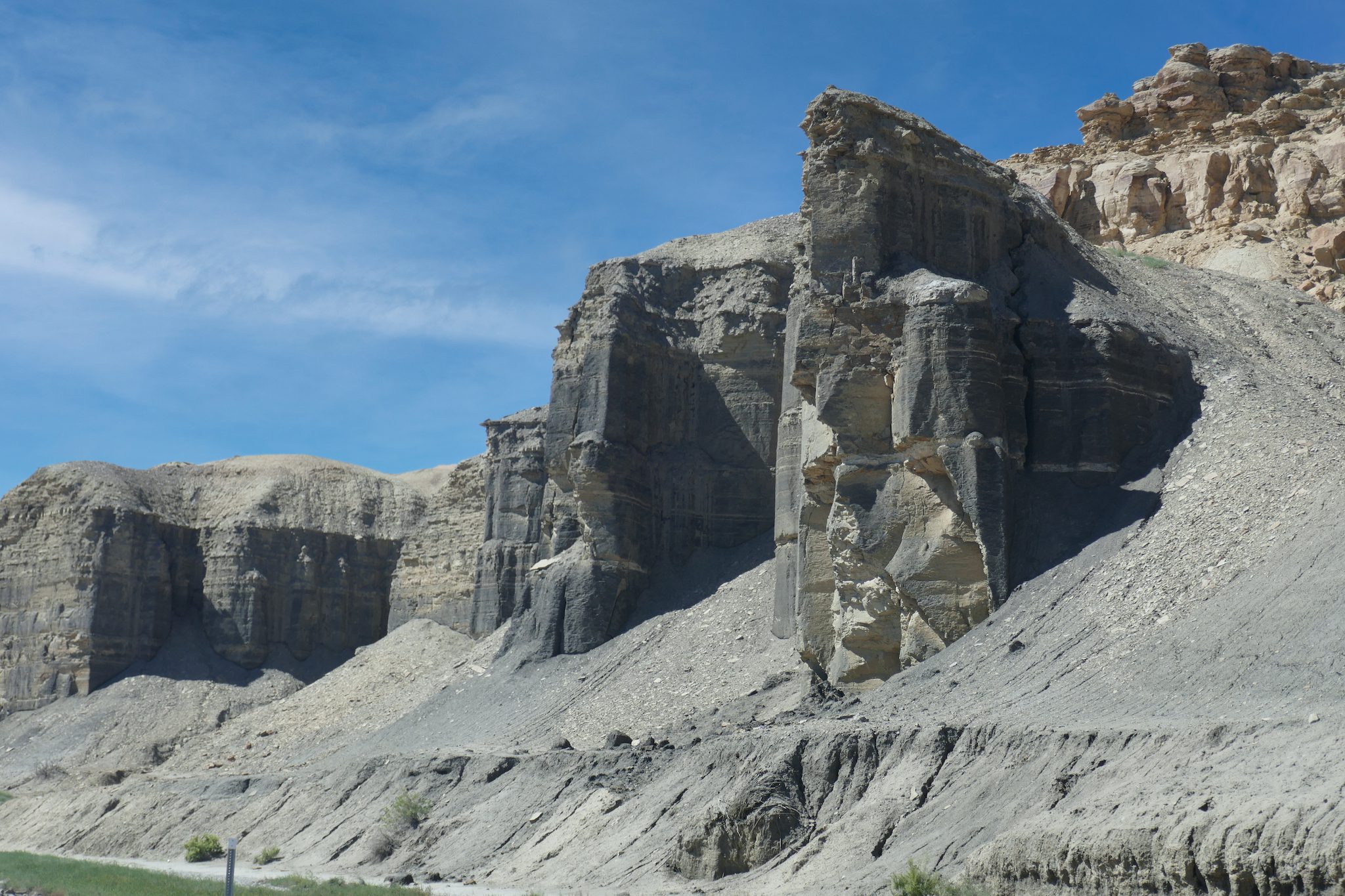 From Hanksville to Caineville and on to Capitol Reef, Highway 24 is simply a treat. Take it slow, look around, and enjoy the roadside geology show!

Here’s a 10-second video of Highway 24 on my YouTube channel.

Be sure, that wherever there is a river, or even a drain; and a stone quarry, or even a roadside bank; much more where there is a sea, or a tidal aestuary, there is geology enough to be learnt, to explain the greater part of the making of all the continents on the globe.