Bryce. Just that one word evokes an entire lifetime of hearing stories from my Dad about this place. He went a few times, back in the days when he and his buddies were going up to Bonneville to run hot rods they’d built (and just that once, the company car my Dad had on loan, but that’s a whole ‘nother story…).

As I approached Bryce, my excitement grew. It took a big hit as I passed through the tourist traps that are line both sides of the road approaching the park boundary. But then, I saw the entrance sign and I was prepared to be amazed. My excitement was crushed flat as I drove the mile and a half to my new campsite. There was nothing amazing to see here. Pine trees, a few prairie dogs out sunning themselves, and a whole lot of cars in parking lots.

So much for first impressions. All the cool stuff at Bryce is below road level. All of it. Like this view… 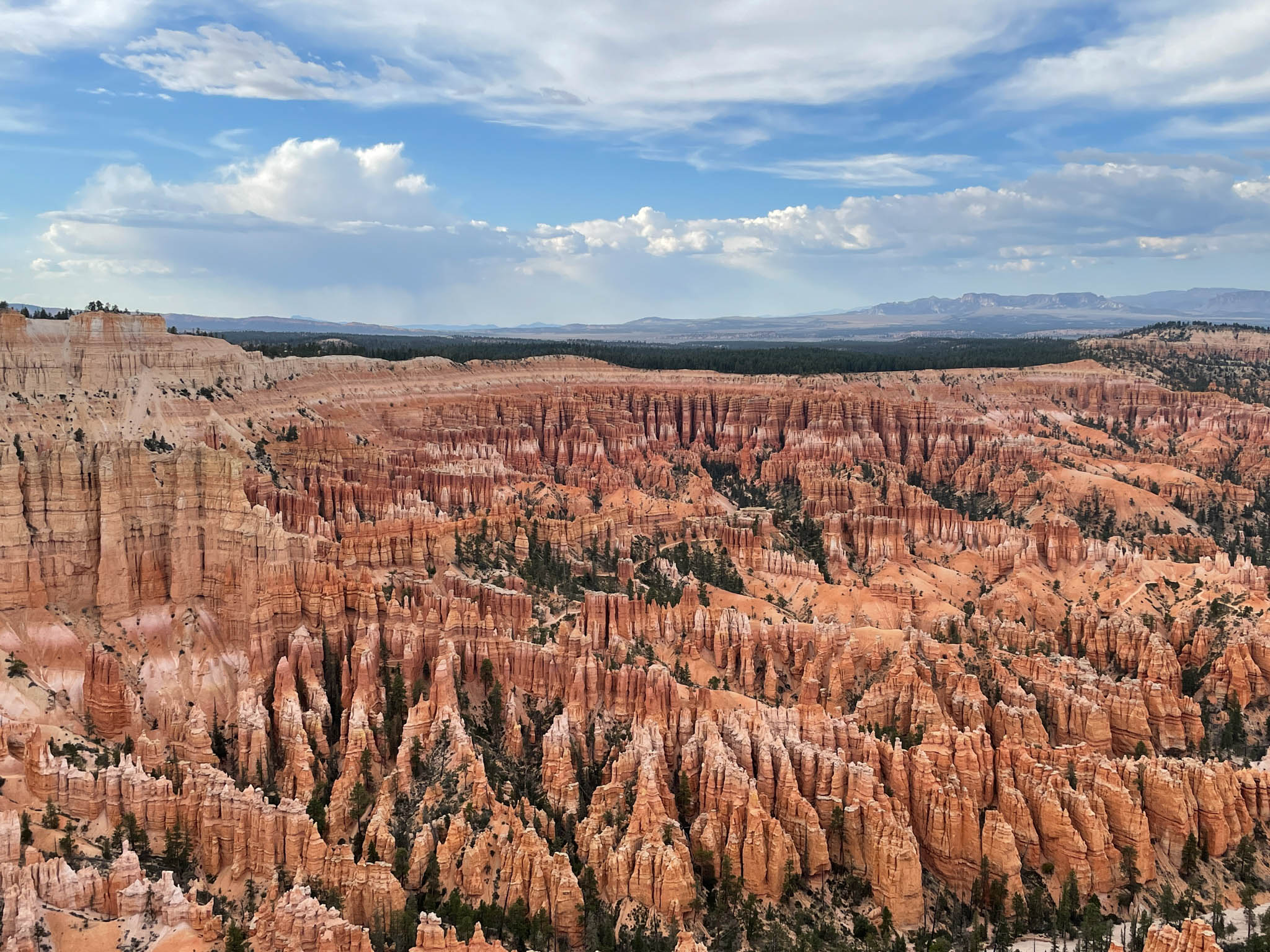 The first thing I realized at Bryce was that driving or taking the shuttle bus was going to be how I saw most of this park. I dropped my trailer and hastily made my campsite before heading out on (yet another) Scenic Drive (I swear, they all have the same name, no matter what park you’re in). As I headed south to the very end of the park, I could see teasing glimpses of the canyons and landscapes on my left. I resisted the temptation to pull over and investigate, figuring I’d do that on my way back.

Spoilers: It was worth the wait. Bryce is worth the trip. My excitement level was super-high by the time I got to the end of the Rainbow Point, the turnaround point for this park’s version of Scenic Drive. I probably took a hundred pictures in the first 10 minutes because I didn’t want to miss a thing. 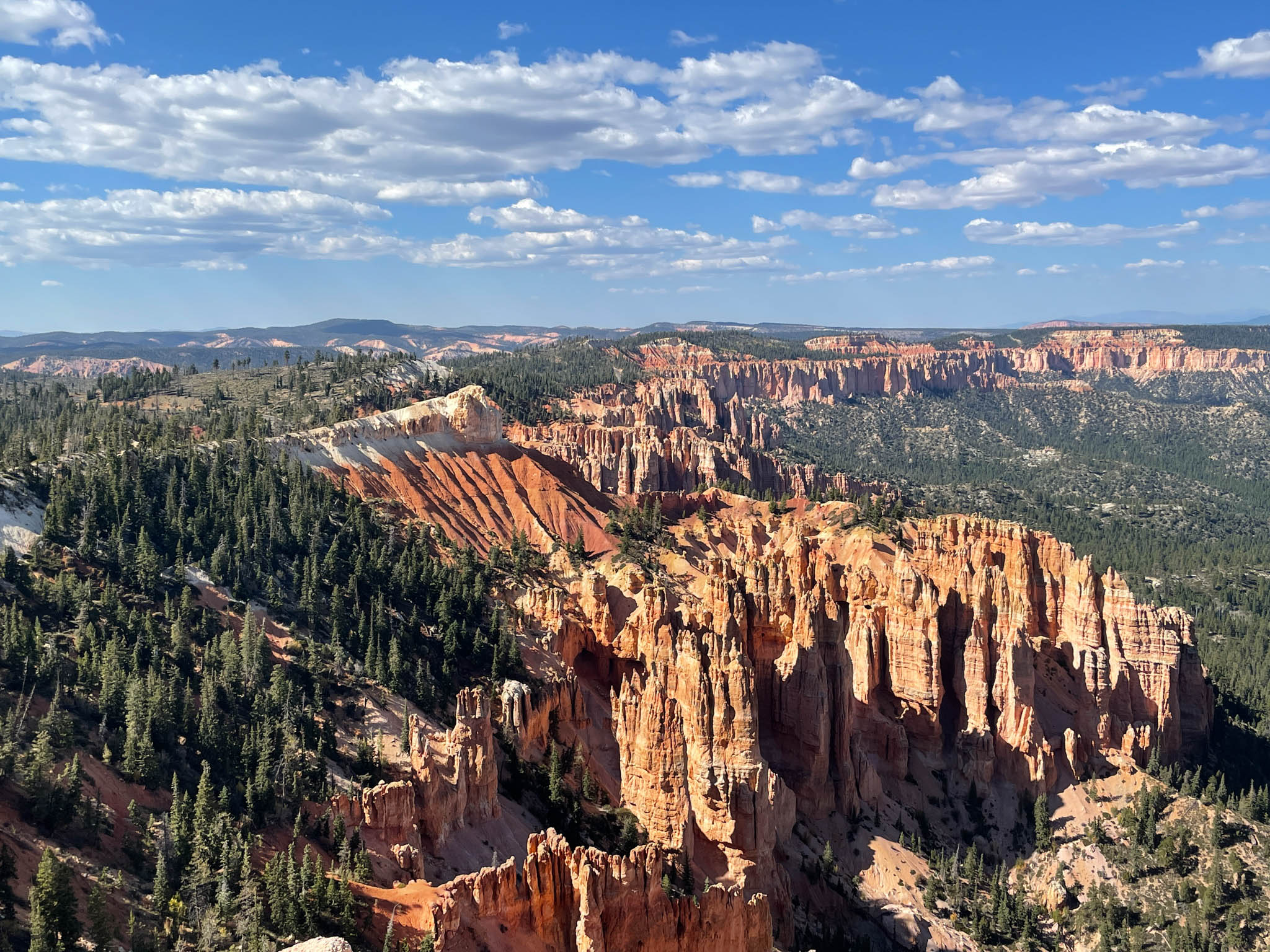 While the previous vistas at Mesa Verde, Arches, and even Capitol Reef has been somewhat marred by hazy skies (no thanks to the western fires), I mostly got lucky at Bryce and had beautiful blue skies. Yes, it rained for about five minutes one afternoon but that was it.

I could show a couple dozen more photos just like this one , but instead, I’m going to highlight the two best things I did at Bryce: watch the sunrise and take a hike down into hoodoo-land.

I got up at oh-dark-thirty and drove over to Sunset Point because it was really dark and hiking in the dark didn’t seem like the smartest idea, given my sore knee. As I waited for the sun to appear, I noticed more and more clouds gathering in the east. Hmm, this wasn’t going to be a classic, gorgeous sunrise so I would make the most of the few minutes I might get. I zoomed way in to capture the clouds and sillhouette of the mountains to the east of me. 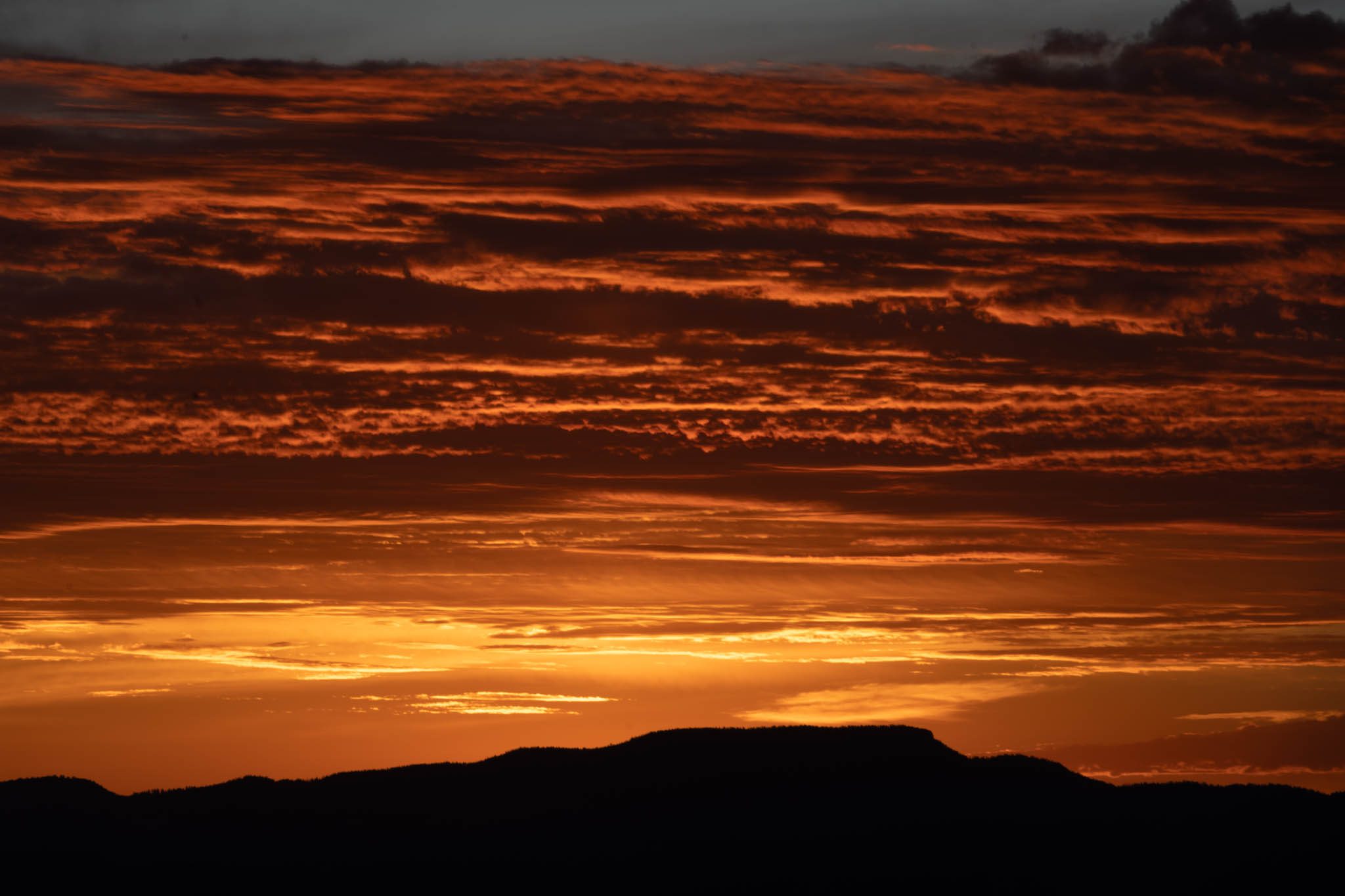 As the sun’s rays lit up the canyon, I took a few shots and then, before I could take any more or even think of changing lenses, the sun was caught up in the cloud layer and everything went to shadows. But, for that few minutes, it was glorious. The orange rocks seemed to be lit on fire and the crowd went silent, appreciating a view that no words could capture.

I made a little video of the sunrise view.

Hiking Among the Hoodoos

On my last full day at Bryce, I decided to take the hiking poles and do the Queens Garden/Navajo Loop hike, one of the easier ones in the park. My right knee had been feeling better, but this trail goes way down and then, yes, way back up, hence the poles. I really wanted to get down there with the hoodoos and see things from that perspective, so off I went. 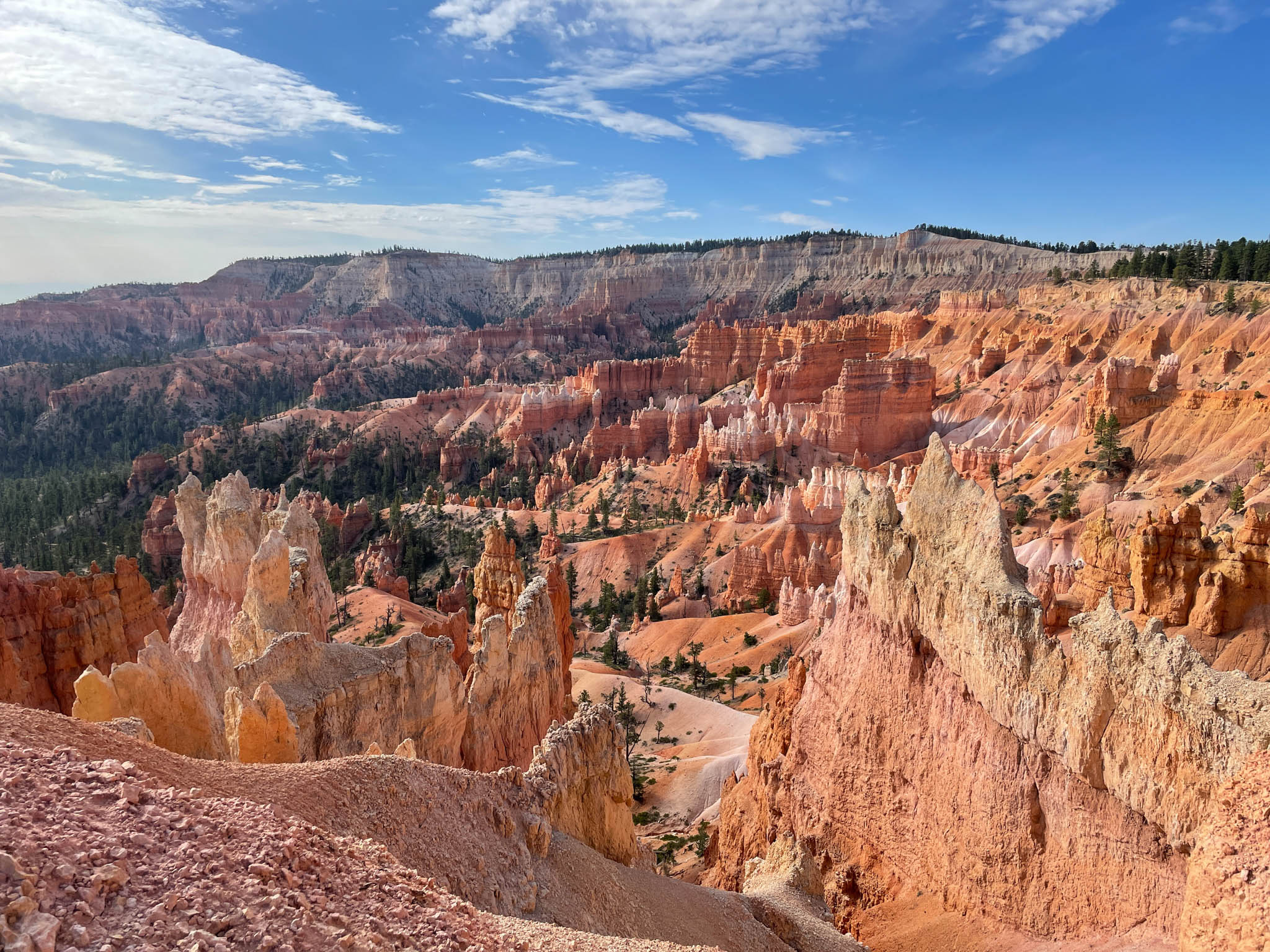 Despite the hordes of hikers, and backups at scenic points, it was totally worth it. I pulled off the trail at various points to let big groups go by, and managed to have a pretty quiet hike, mostly unbothered by incessant chattering of people talking about everything *but* the beauty they were walking through. I did kind of wonder what happened to the feeling of wonder or being dumbstruck by beauty. 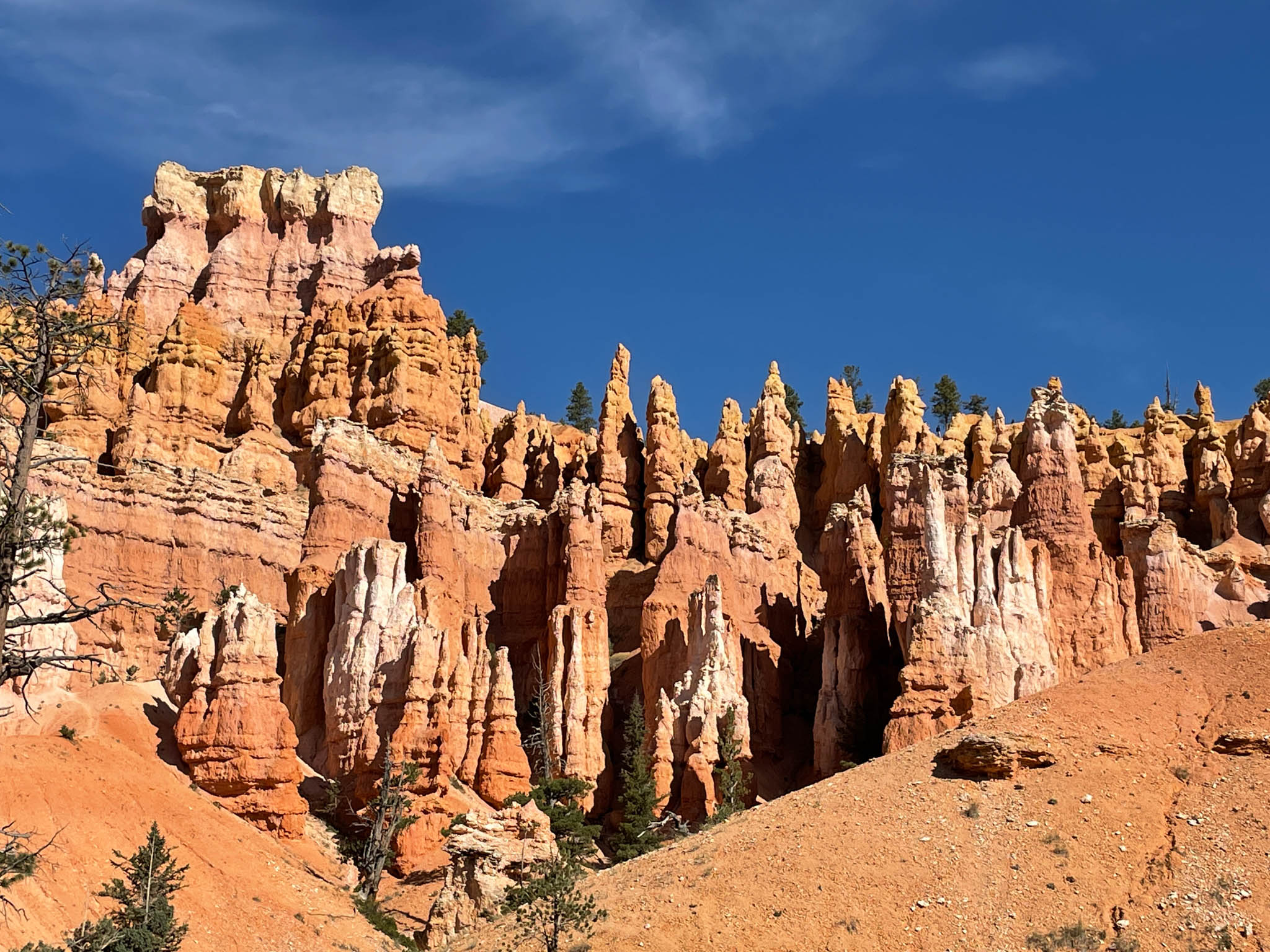 On the trail, there’s a decision point entering the Navajo Loop where you can go left (Wall Street) or right (Two Bridges) to hike up (eventually) to Sunset Point. Everyone seemed to be going right, so I chose the left fork. Within five minutes, I was all alone. No one in sight. No one in earshot. I stopped to appreciate the silence and the beauty and the isolation of being in that place all alone. It was magical.

Here’s a quick video of me enjoying that solo moment. 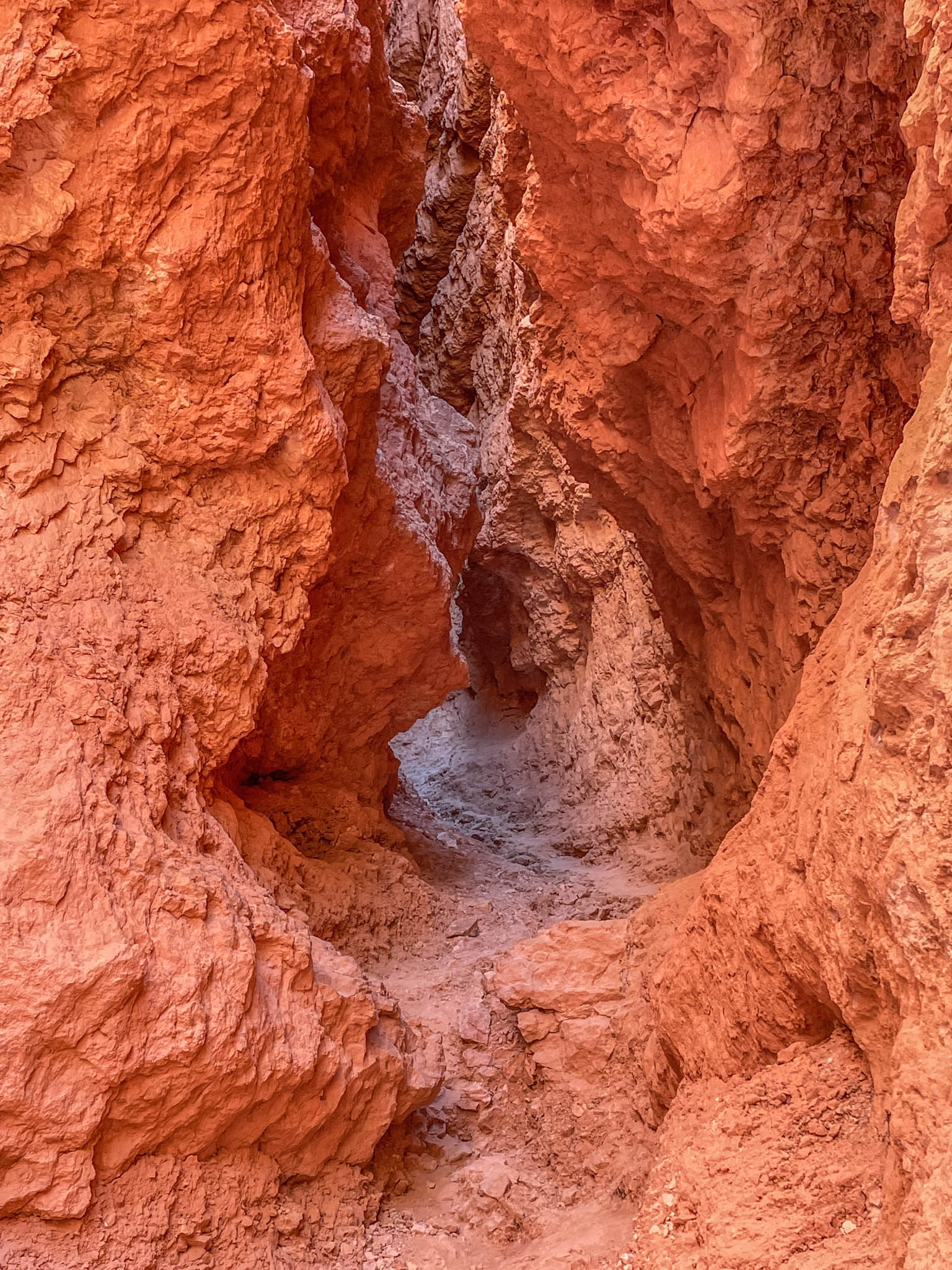 All too soon, a group of hikers came down the trail towards me, and so I started walking again, heading towards the end of the loop. Saw this beautiful slot canyon (above) just before I saw where I would have to go to get out of the canyon. Yikes. Looking up at the switchbacks made my knees ache before I even started! But I made it. I went slow, stopped when I needed to in the bits of shade at either side of the switchbacks, and took the time to appreciate the views ahead of and behind me. 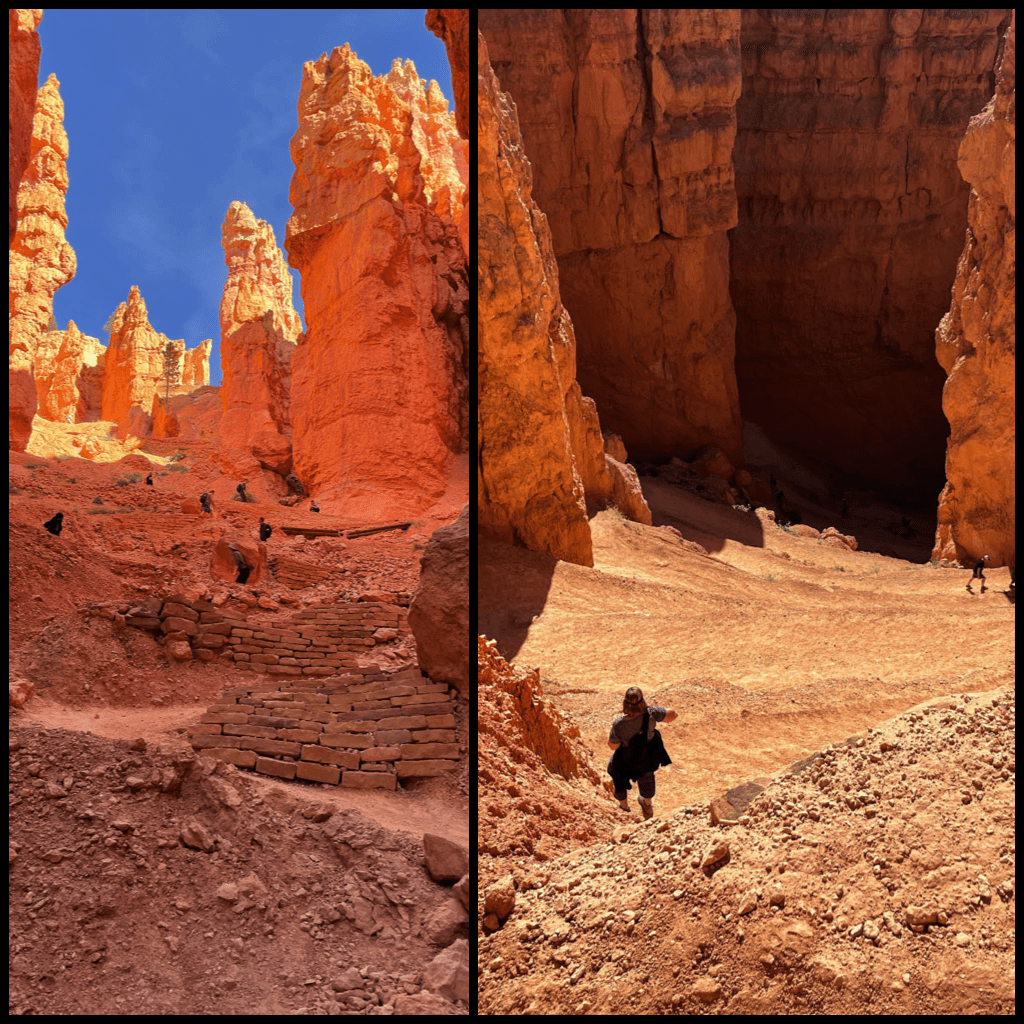 To give you a sense of place, the red arrow below shows the trail I took the second half of my hike. I was definitely getting down with the hoodoos. It was worth all the uphill at the end. 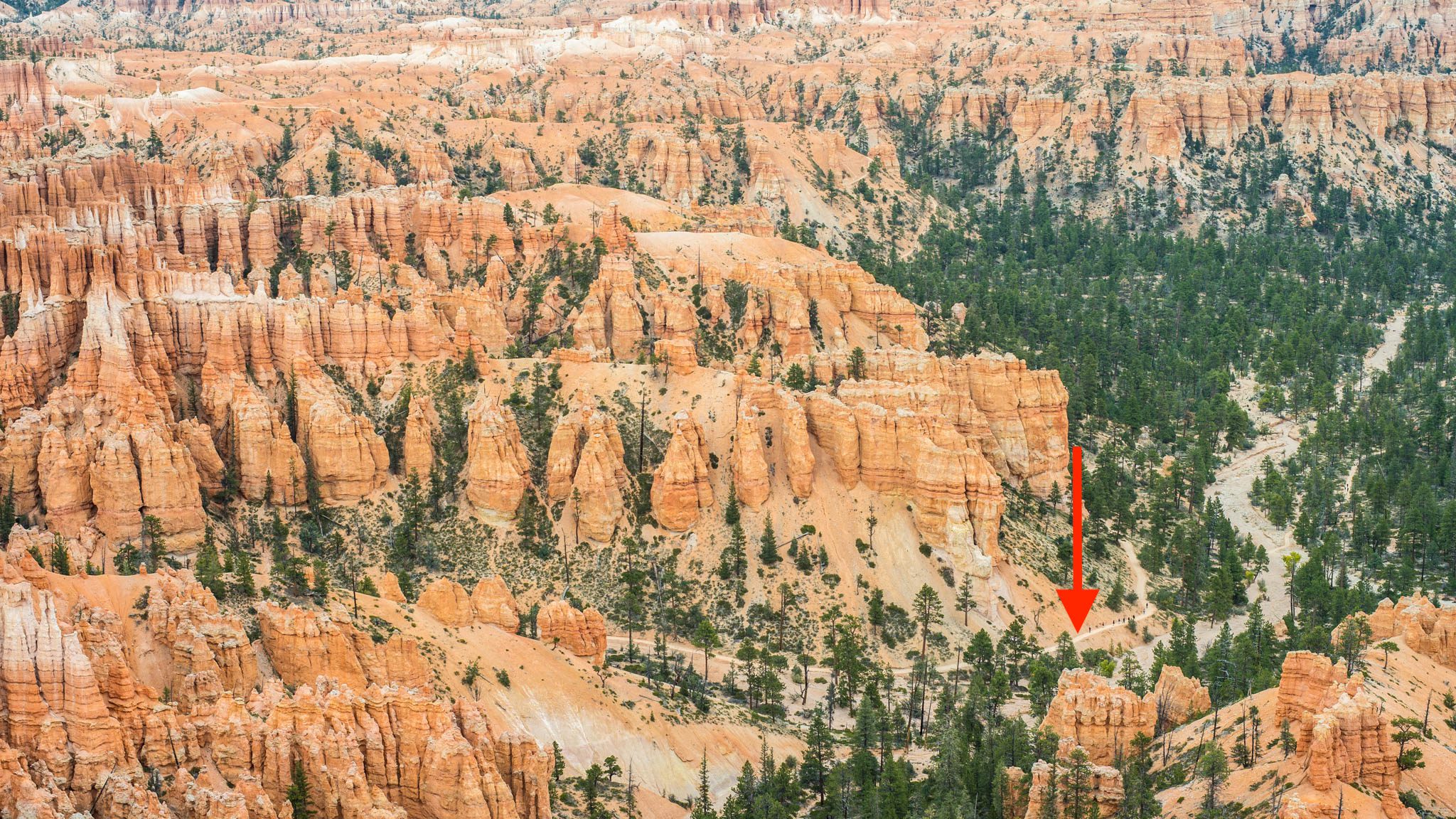 The next morning, I packed up and hitched up, headed for the last of Utah’s mighty five National Parks. Three nights seemed like a good amount of time to get a beginner’s sense of Bryce, and know what to do and see the next trip. And, yes, I decided I need to come back to this place, although I’ll aim for a bit more off-season (if such a thing exists anymore).

When you visit Bryce, you’re getting up there in elevation. The lowest point in the park, Yellow Creek, checks in at 6,620 feet (2,108 meters) while Rainbow Point is the highest, at 9,115 feet (2,778 meters). I could definitely feel the elevation at Rainbow Point, despite having been at 5,000 feet or higher for more than a month.

Fremont and Anasazi people lived near Bryce Canyon from around 200 A.D. until 1200. Paiute Indians occupied the area beginning around 1200 A.D. but only seasonally as there is no evidence of permanent settlements, probably because of the harsh winter weather.

Bryce Canyon has the largest collection of hoodoos in the world. But what exactly is a hoodoo and how do they form into those distinctive towers? Three steps, over about the last 50 million years: deposits of limestone and sandstone, uplifting from sea level to over a mile high, and then the ever-popular weathering and erosion.

Want to know more? Check out the Bryce Canyon Geodiversity Atlas from the National Park Service.

Stuff your eyes with wonder, live as if you’d drop dead in ten seconds. See the world. It’s more fantastic than any dream made or paid for in factories.