You would think that by this point in my trip, I would be expecting amazing things at every stop. And I was. But, honestly, Capitol Reef was perhaps the most unexpected place I’ve been in my life. Why, you might ask? Here’s the thing… I hadn’t done any research about this place. I had somehow skipped my friend’s blog post about their visit. I’d actually never even *heard* of Capitol Reef until I was planning this trip and figured I might as well be check this National Park off the list, since it was literally on the way. So I had no expectations, no preconceived notions whether it would be so-so, amazing, or off-the-charts crazy beautiful. 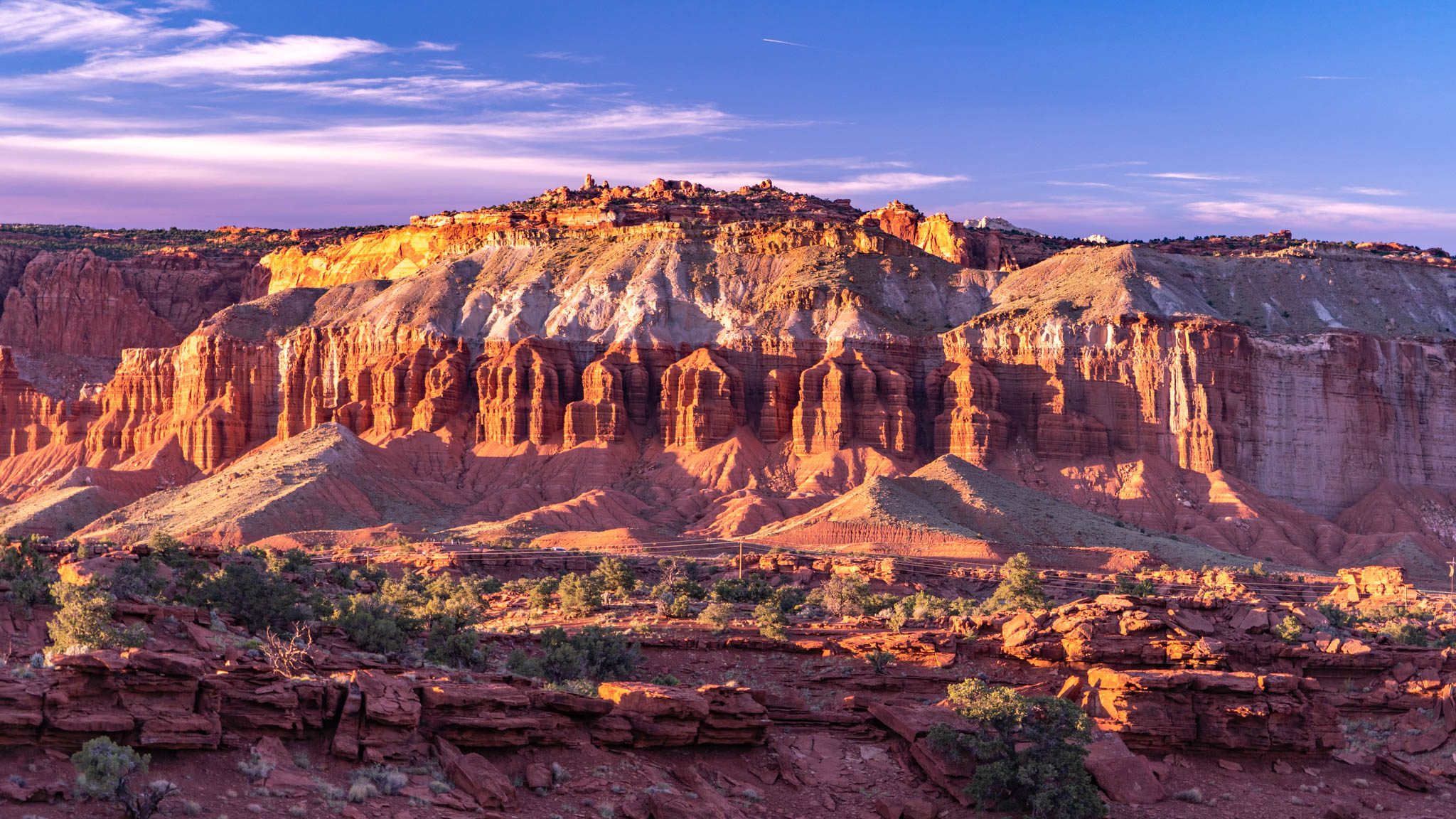 Spoiler Alert: Yes, Bryce is amazingly cool with all those hoodoos and Zion literally made me cry when I saw it, but Capitol Reef was indeed off-the-charts crazy beautiful. It made me smile with pure happiness every time I looked around me. It just might be my favorite National Park, or at least tied with Yosemite (my first and, therefore, forever National Park love).

Fruita: The Oasis in the Desert

After sand dunes and mesas, canyons and arches, driving into the Fruita section of Capitol Reef was truly arriving at an oasis in the desert. The dampness of the air, the greenery of the orchards, and the deer outside my door, I loved all of it. I didn’t care that my camping spot had minimal sun and no hookups – it had deer. Seriously, like seven bucks right outside my door as I was making dinner the first night. And this photo? The view from my door. Seriously, what’s not to like about this spot?! 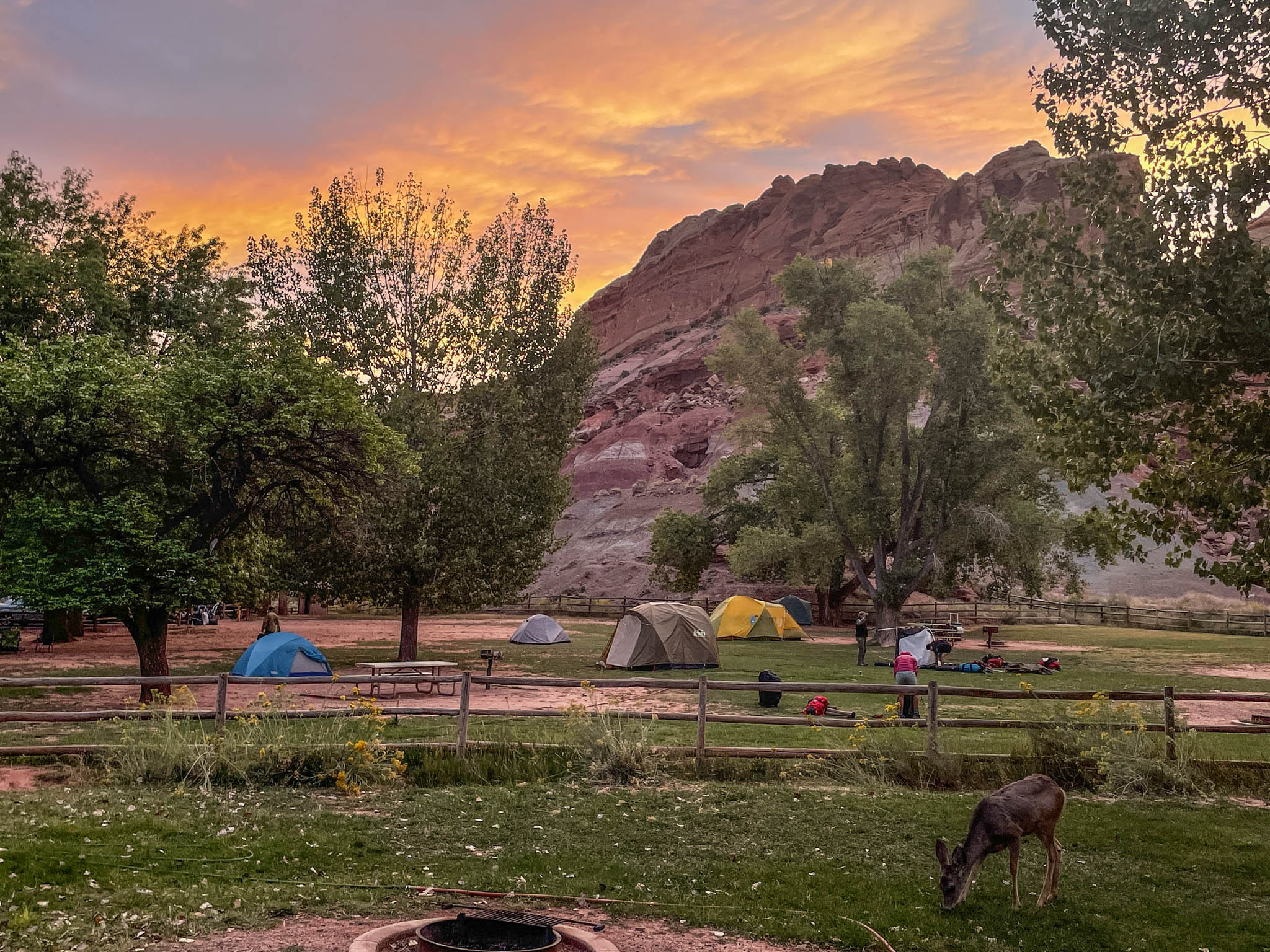 After dinner, I took a stroll around the campground loop, passing a couple talking to each other. About 10 yards on, I heard someone call my name. I turned around and, yes, that couple knew me and, after a few minutes, I remembered them; we had met back in the summer of 2017 at an Alto rally in North Carolina! (They have seriously good memories and facial recognition abilities.) We had a little catchup before they had to head back to their camp host gig in Escalante. Such a fun surprise to meet them again! 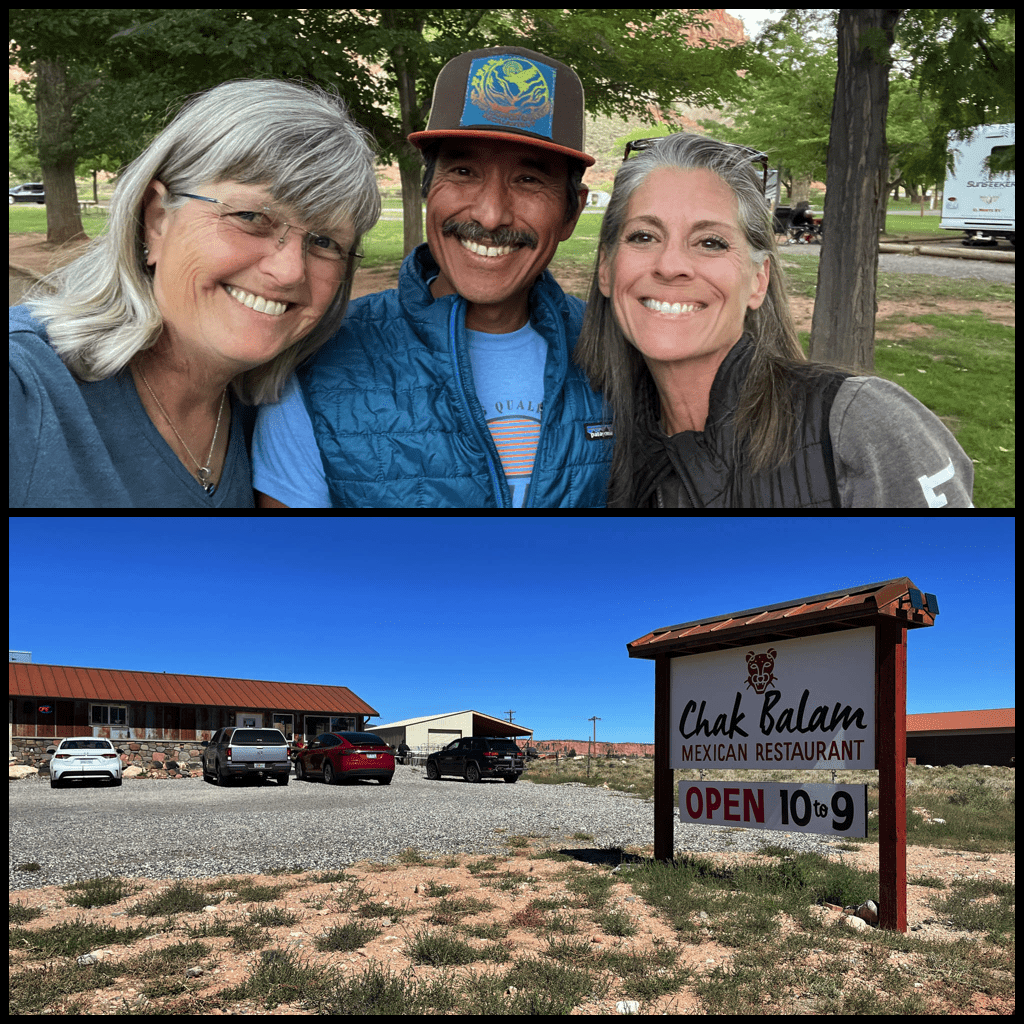 They recommended a Mexican restaurant in Torrey, and, damn, they were spot on with how good it was. So I’ll recommend it to you, dear readers. Don’t be fooled by what looks like a Thai name, it’s actually Mayan. The food was delicious and the portions so generous that I had the other half of my chimichanga for dinner that night. 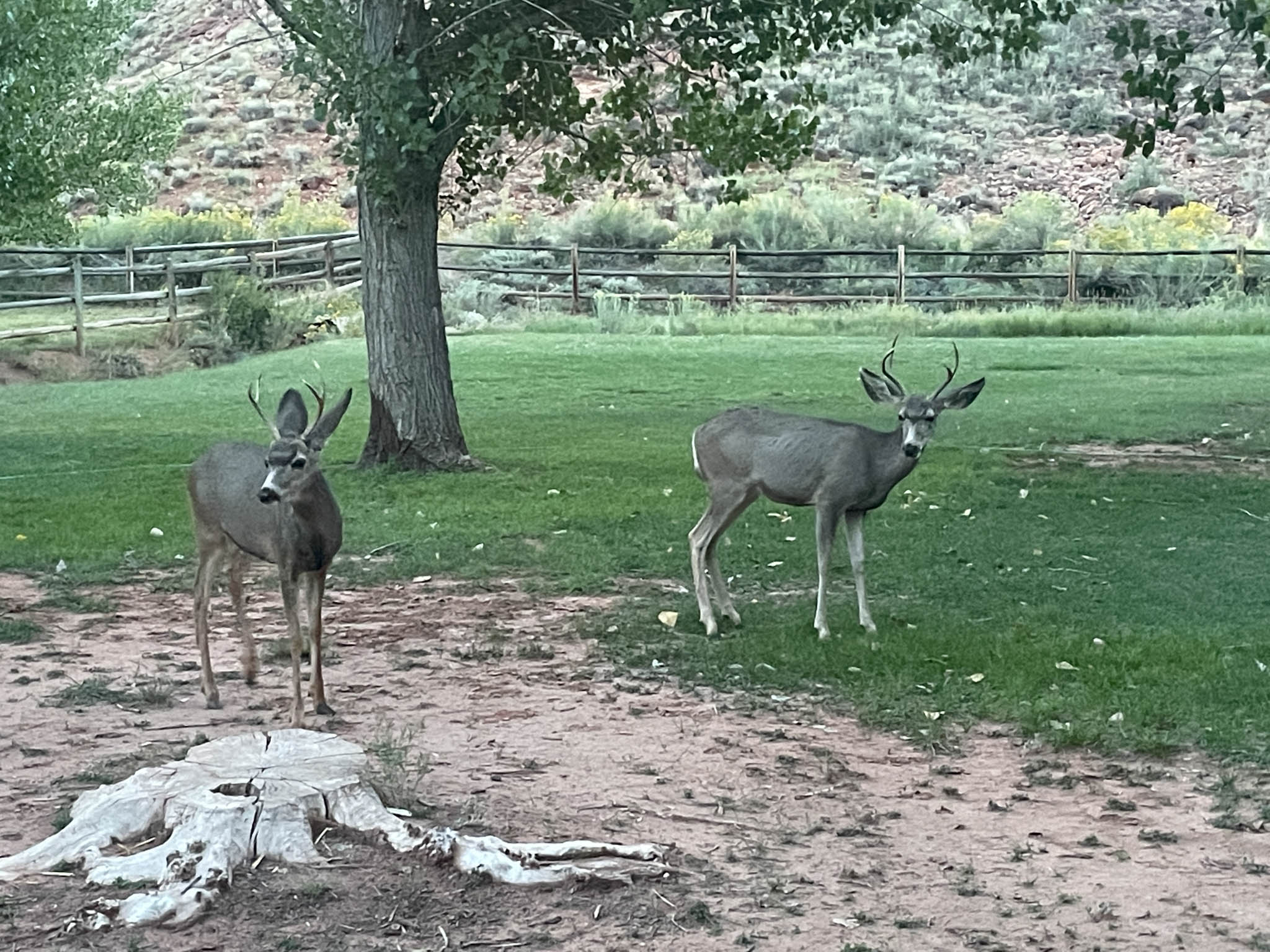 The next morning, I heard a bit of commotion out my back window as I was waking up. turns out these two baby bucks were alternately eating and having a bit of a tussle with each other. After each shoving match with those little baby horns, they would back up and glance around as if to make sure none of the bigger bucks saw their silly behavior. They were so adorable.

Watch a bit of video of the baby bucks going at it.

Once the baby bucks had wandered off in search of more grass to eat, I pulled myself out of bed and got on with my day. First up was the Scenic Drive, an 8-mile road (out and back = 16 miles). The park says to allot an hour and a half, including the two spurs. I did one spur and it took me 3 hours. I stopped a lot. Like at every turnout and scenic vista. Literally every single one.

This is the Waterpocket Fold, which you can only see at this one point on the drive, and then only if you’re really taking the long view down the road and not just looking side to side (and there is a lot to see side to side!). Almost a hundred miles long, it runs all the way down to Lake Powell on the Utah/Arizona border. Capitol Reef is one big exception to the rest of the Colorado Plateau because of the Waterpocket Fold. While everywhere else has horizontal layers exposing all that geological history, Capitol Reef is the only one that has these slanted layers. 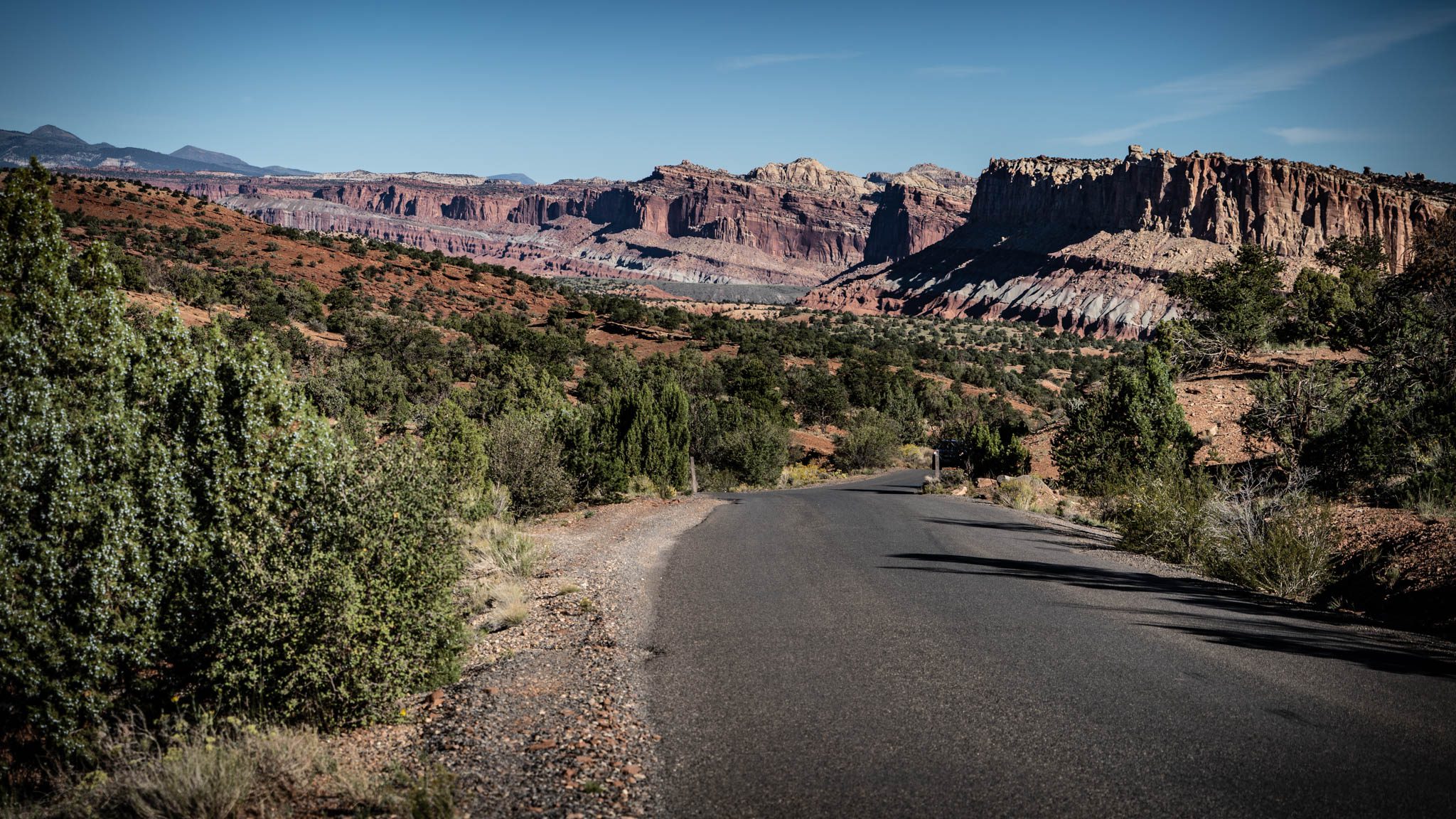 Why call it the Waterpocket Fold?

The “waterpocket” part is because the material in the Fold has eroded to created small potholes or “pockets” that can hold rainwater and snowmelt. The Fold part is a bit more complicated, so bear with me. As part of the tectonic forces that created the Laramide Orogeny (orogeny = mountain building event), this area was uplifted about 50-70 million years ago. As part of that, the western side folded over the fault, making the western side about 7500 feet higher than the eastern side. Over time, erosion has exposed the fold so we can see it. And there you have it, why it’s called the Waterpocket Fold. 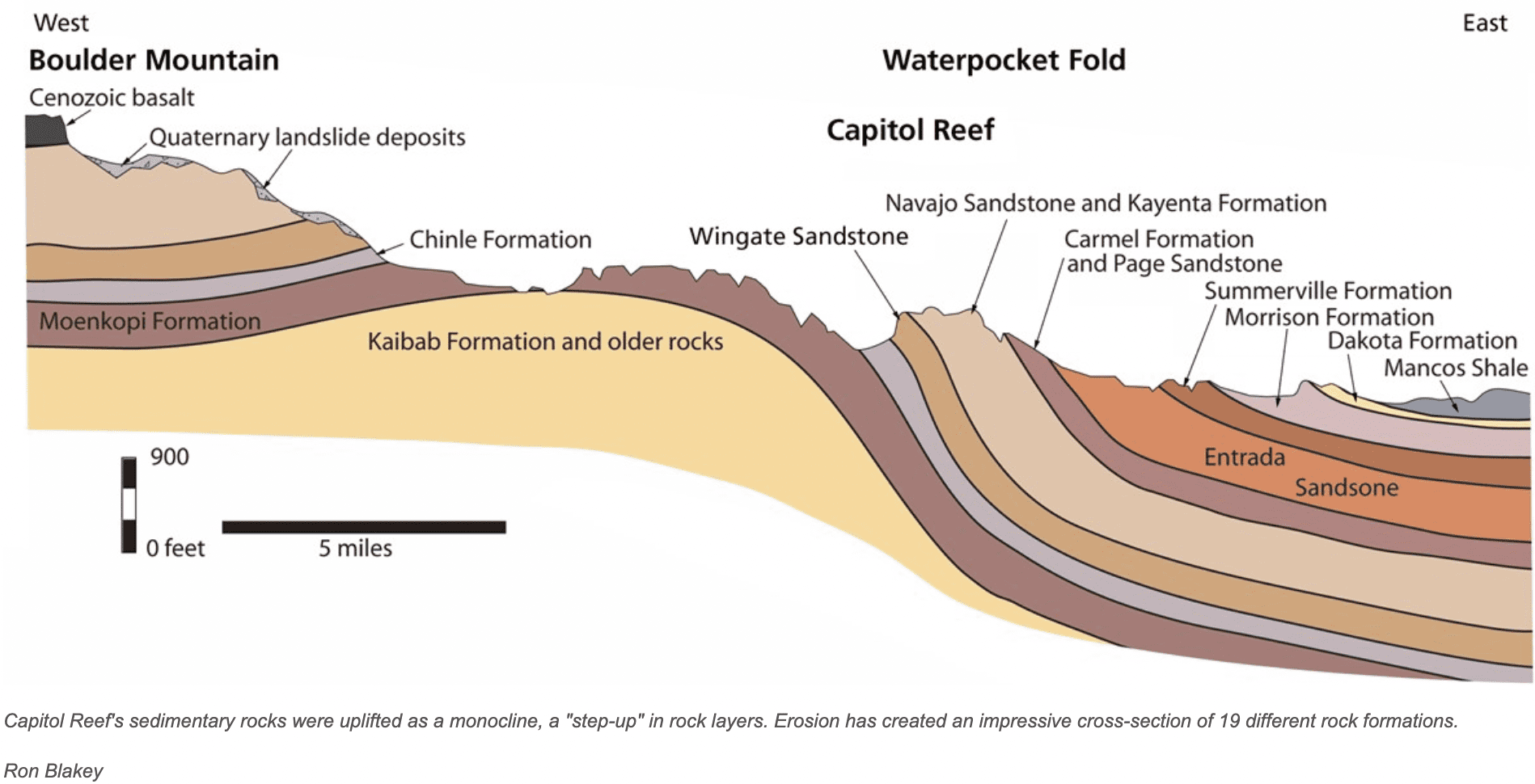 So if the Waterpocket Fold is so great, why is the park called Capitol Reef?

The early white explorers that came across this place saw that some of the (Navajo Sandstone) rock formations were domed, reminding them of the US Capitol building. Add to that the sailors in the group who knew a reef was something in the water that blocked your forward movement. Combine those two wild takes on this beautiful area and you get Capitol Reef. And back then, they had no idea of tectonic plates, the Colorado Plateau, or the amazing Waterpocket Fold. Otherwise, I’m sure this would now be called the Waterpocket Fold National Park (which to me sounds way more cool).

As you might imagine, traveling across the Waterpocket Fold could be rather challenging before Highway 24 paved the way. Back in the day, there was one narrow canyon where everyone from early indigenous tribes to white explorers to Mormon settlers passed from one side to the other. You did have to be careful though, as flooding during the rainy season could wipe out anything caught in the canyon. 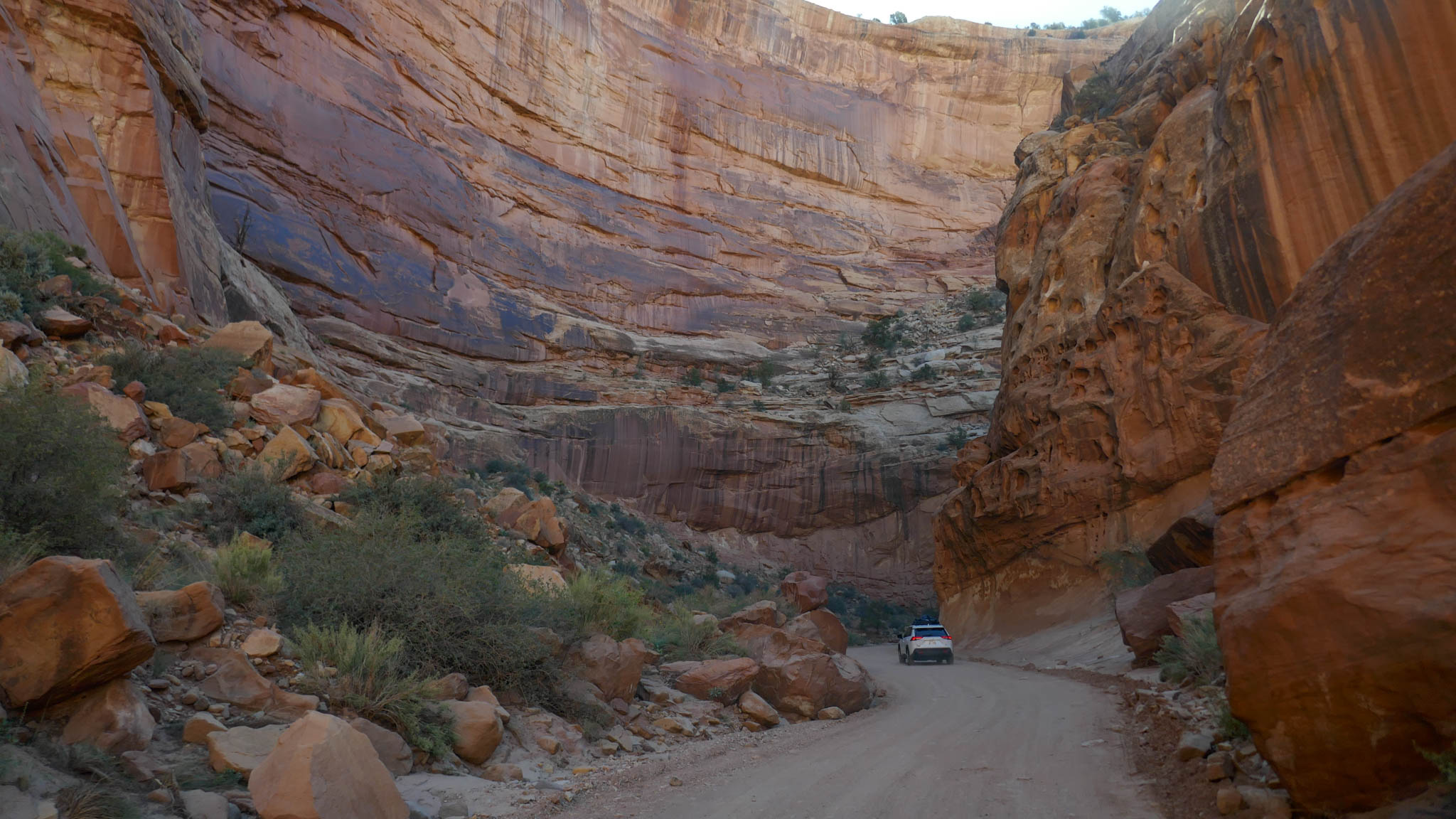 The canyon walls go up so high the sun disappears, and you can find yourself thinking what it must have been like to take this road on foot, by horse or by wagon way back when. 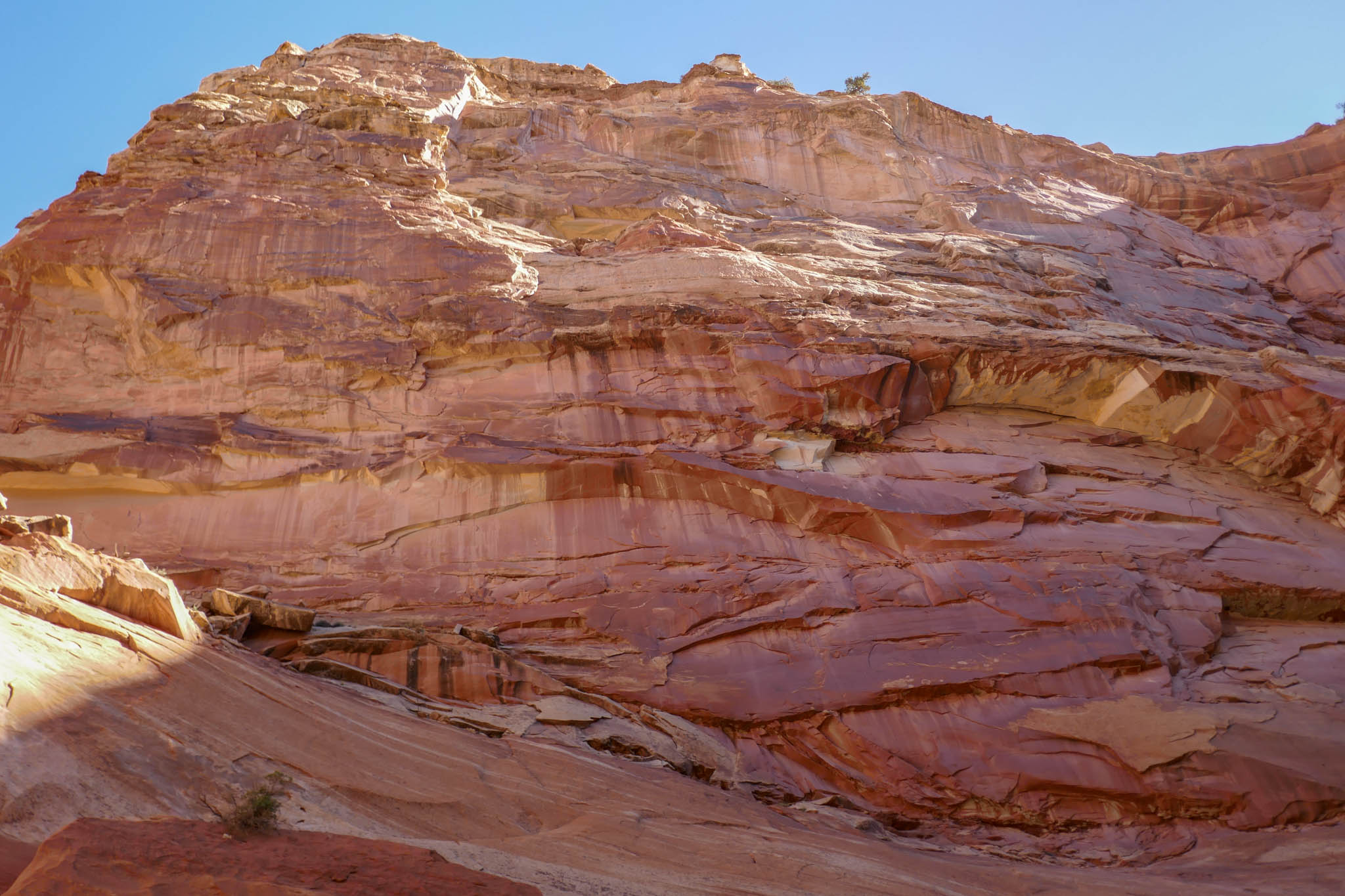 It’s absolutely dead quiet (well, except for your engine noise) and it felt like a time machine to me, putting me back a century or more ago. No interstate highways or even paved roads. If you wanted to get from one side of Capitol Reef to the other, this was the only way.

The layering that you can see at Capitol Reef is astounding. Every single formation seems to be trying to outdo the others in displaying their geological origins. This one has three clearly visible layers. The base is Wingate Sandstone, then the grey Chinle Formation, topped by the red Moenkopi Formation. 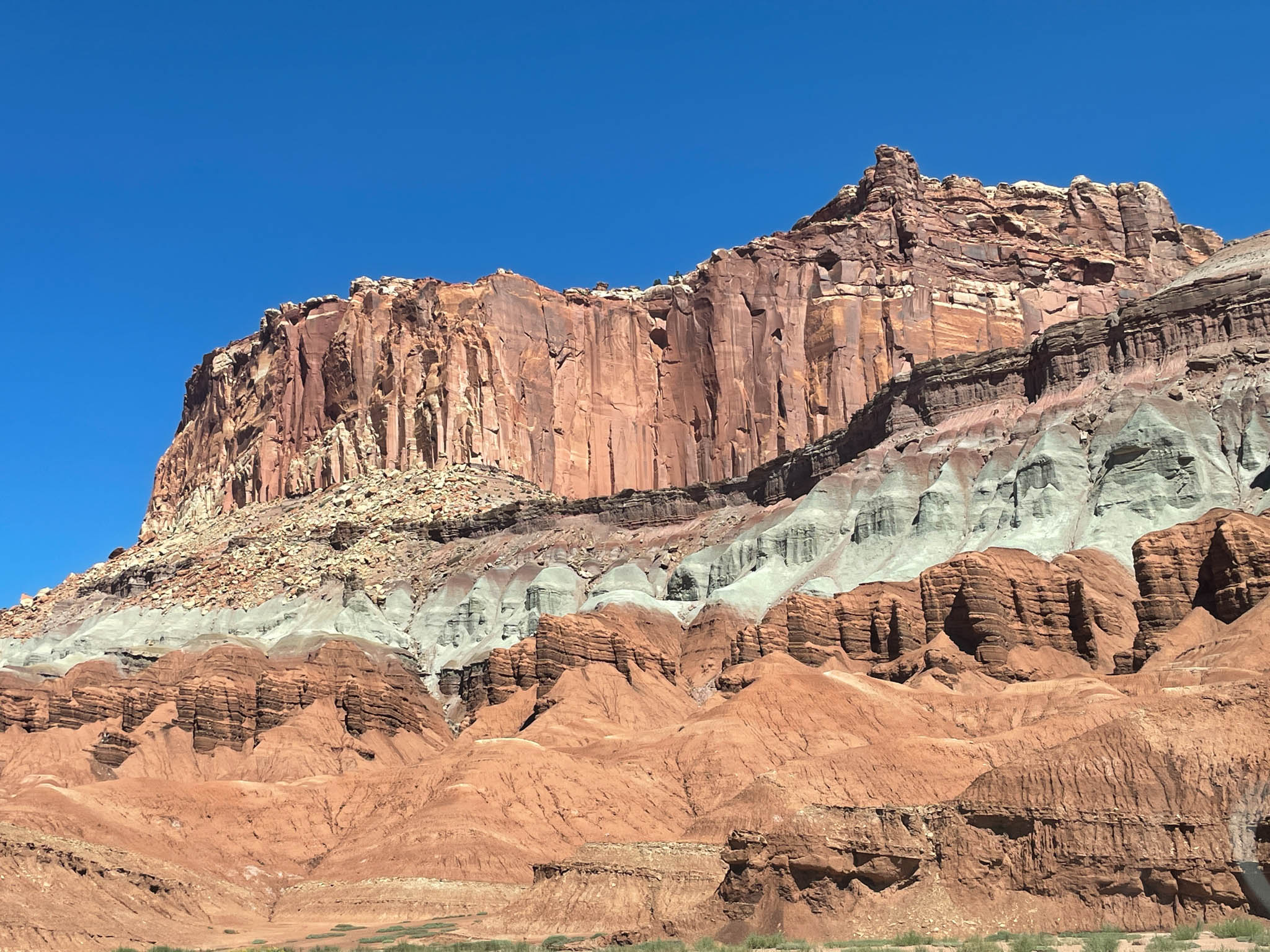 At the end of the paved road that makes up the Scenic Drive, this formation towers over the parking lot. Just look at all those layers and the erosion that has shaped the towers at the top of the pile. 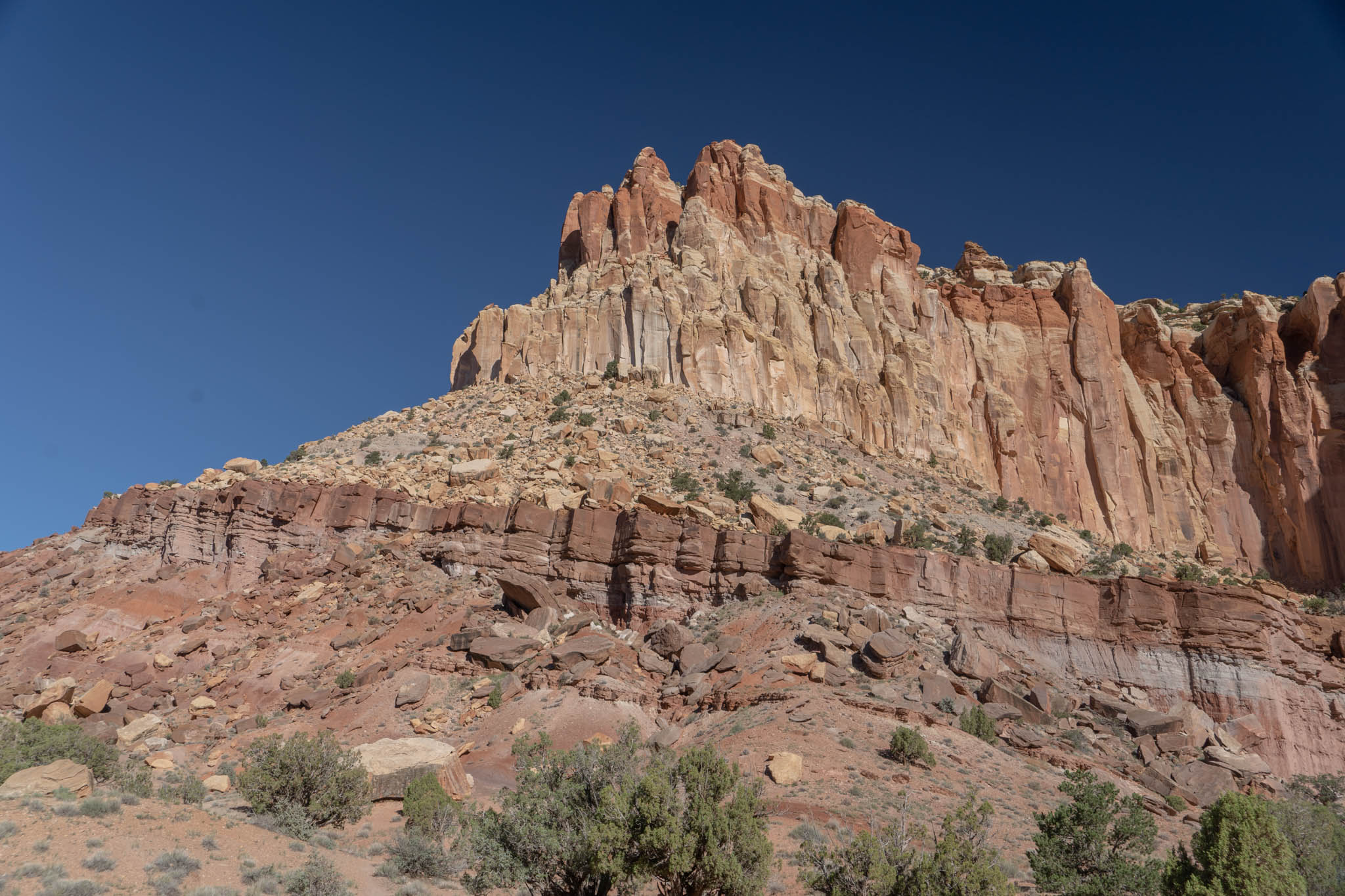 I had gone into Torrey to run a few errands and gas up (it’s way easier to gas up without a trailer attached to your vehicle, so I tend to do the gassing up before I leave a place, if it’s not too far out of the way). I was trying to time things so that I would get to the western end of Capitol Reef for golden hour. As I came back on Highway 24, I stopped and turned around to get this view looking west. The first tinges of golden hour had arrived, and I pushed the gas pedal a little harder to get to my destination. 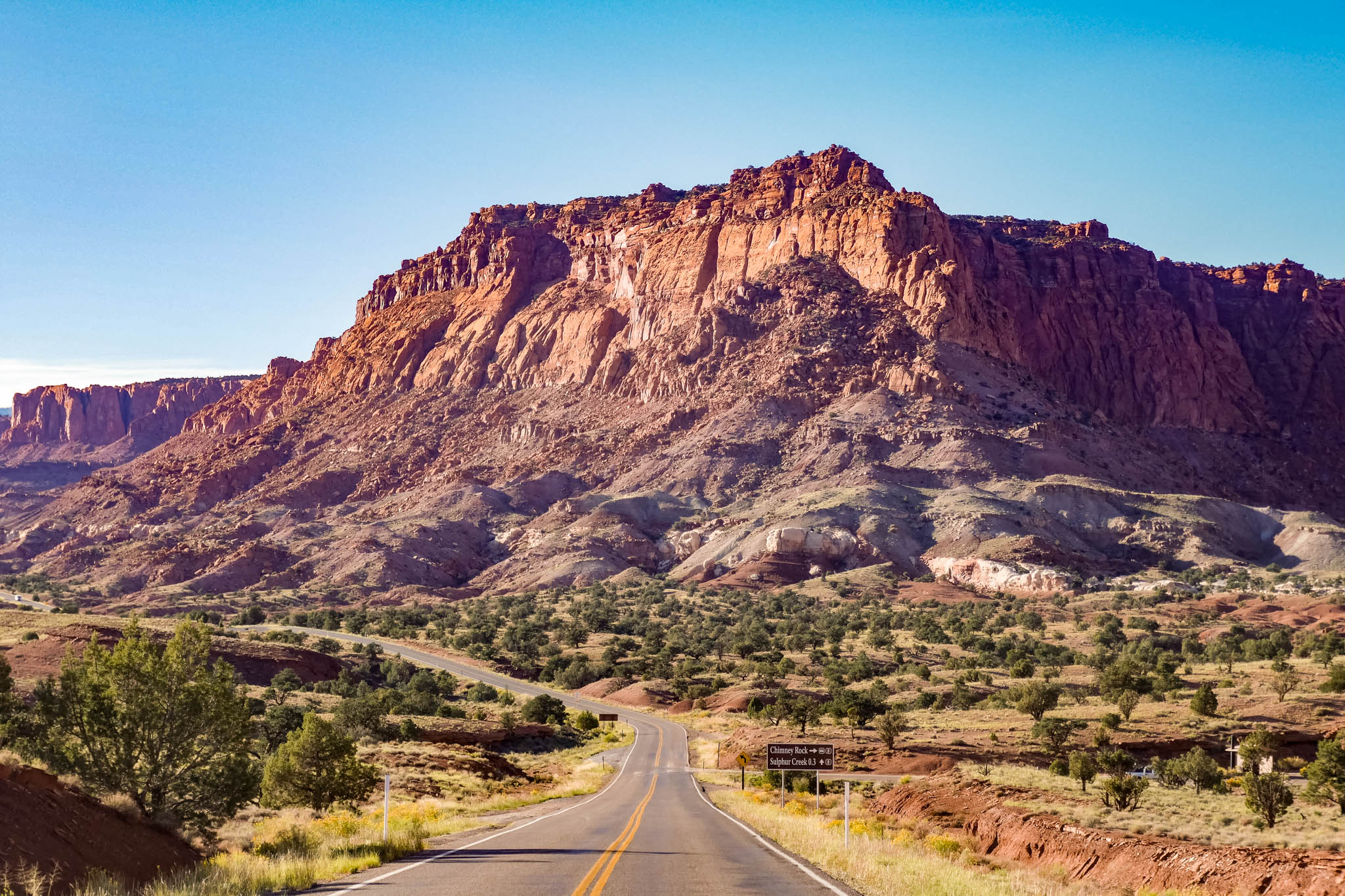 I had thought Sunset Point would be the best place to see sunset, and so did about three dozen other cars. I found a spot, and grabbed my camera and started hiking. I got there just before sunset and that’s when I realized this spot wasn’t going to be that amazing this time of year because the angle of the sun put most of the rocks in shadow before sundown. I started hiking back west to the parking lot, hoping I might catch better sunset views somewhere else. 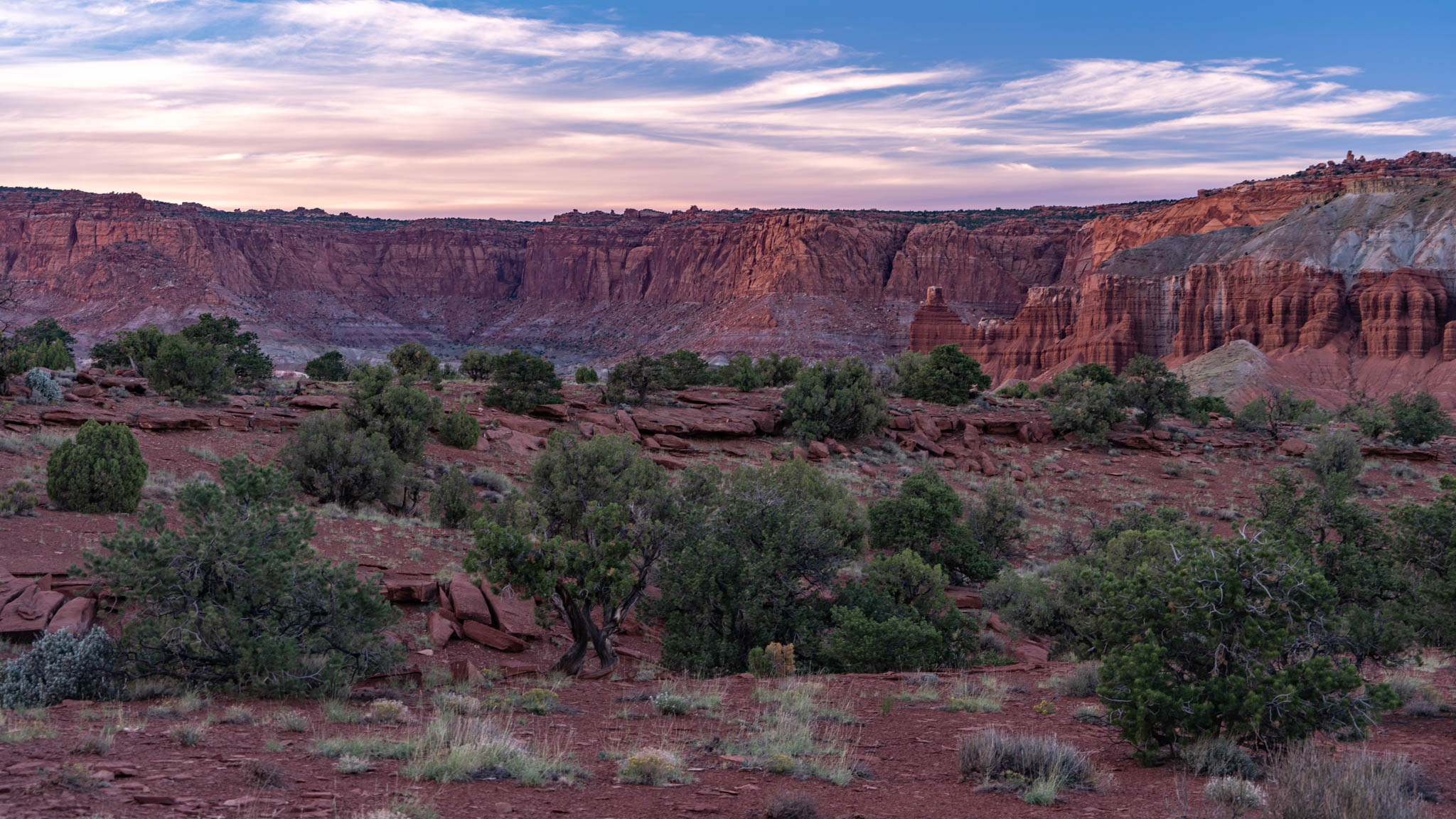 Yes, I did. The colors of the rocks here are amazing at sunset. It was a great way to close out my stay at Capitol Reef.

The first known people in this area were hunters and gatherers that went after big game, from 7,500-500 BCE. From 300-1300 C.E., people of the Fremont Culture settled in this area, farming squash, corn and beans to supplement their hunting. They left petroglyphs on rock walls and painted pictographs, the only reminders we have of their time here.

Nomadic groups such as the Ute, Paiute, Navajo, Hopi, and Zuni inhabited the area seasonally for hundreds of years. Thirty-two tribes have an ongoing association with Capitol Reef.

Beginning in the 1800s, white people came to explore and survey the area. In the 1870s, Mormon pioneers settled in what is now the Fruita historic district, planting orchards that survive to this day (and you can buy the fruit right after you pick it off the trees).

If all that geology talk earlier in the post didn’t fill you up, here’s a bit more information, mostly of the “big picture” kind.

Rocks at Capitol Reef range from Permian (270 million years old) to Cretaceous (80 million years old). That’s about 200 millions years of geology. In that time, this area had riverse and swamps (Chinle Formation), deserts (Navajo Sandstone), and shallow oceans (Mancos Shale). Fossils found at Capitol Reef show were deposited when this area was close to sea level. Now? It’s about 5000 feet above sea level.

And thanks to Google and Mr. Beadle’s 8th grade science class website, here’s a great graphic showing how geological periods relate to things like ammonites and dinosaurs. (Remember, Capitol Reef goes from Permian to Cretaceous, as far as fossil records can show.) 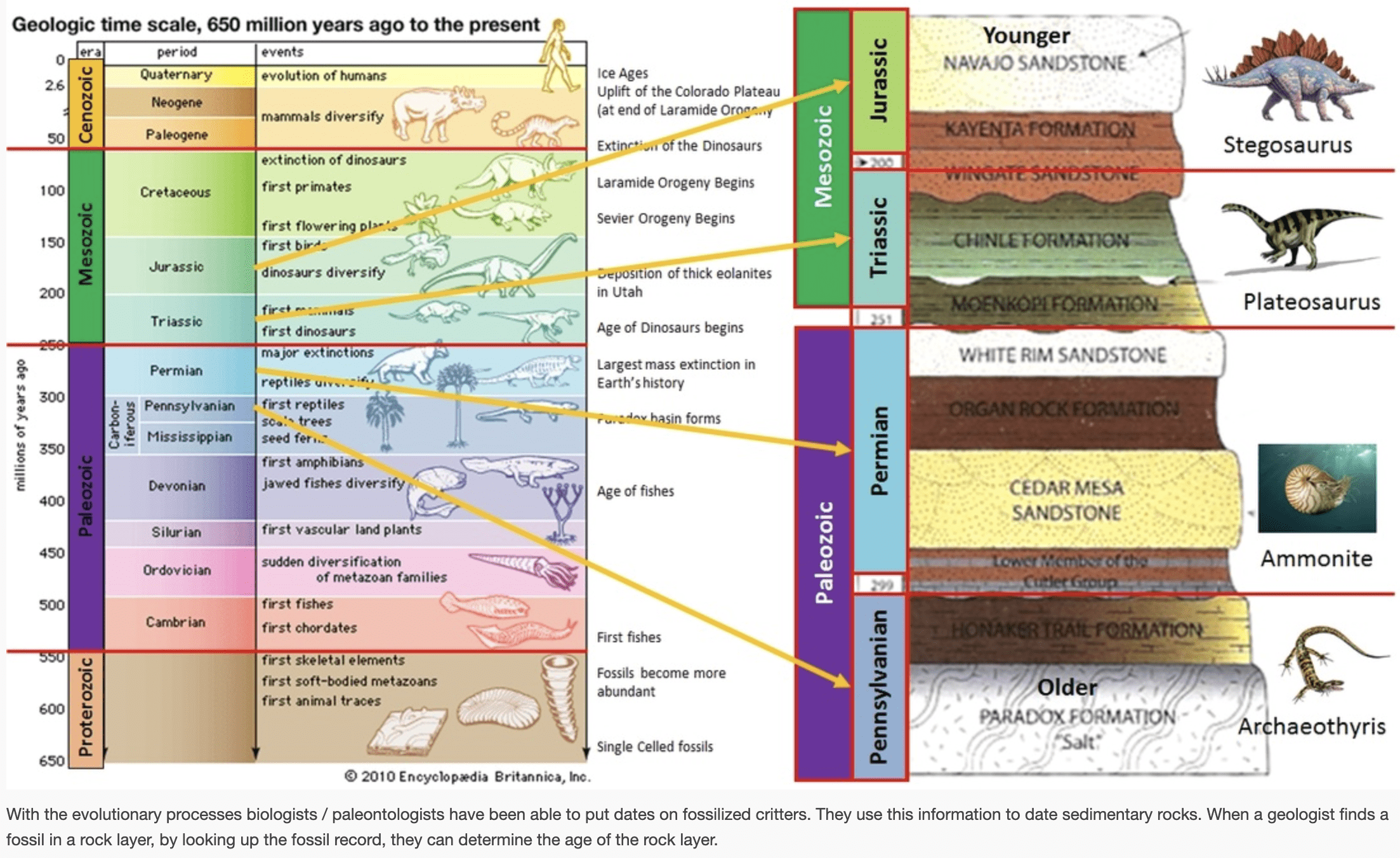 Want to know more? Check out the Capitol Reef Geodiversity Atlas from the National Park Service.

Capitol Reed is filled with geology that takes shape, color, and dimension to a level beyond comprehension.

Stefanie Payne (A Year in the National Parks)