That first drive into Arches National Park felt like I was on a movie backlot where the set designers had gone completely crazy. There’s just no way to grasp the scale and expanse of Arches when you first see it. It’s a good thing I got there early in the day when the traffic was pretty mild because with each mile, I drove slower and slower, trying to take it all in.

Four drives out and back on that 18 mile road in three days and at the end of all that, I still felt like I was a tiny little bug in that huge landscape.

I was so mesmerized by the roadside views that it almost didn’t matter that pullouts and parking lots were full up by 9 or 10 AM every day. I just kept going till I found a spot that did have at least a few openings and parked there for a while. It seemed OK to pull over at a wide spot on the shoulder and take a picture, so I did some of that too. 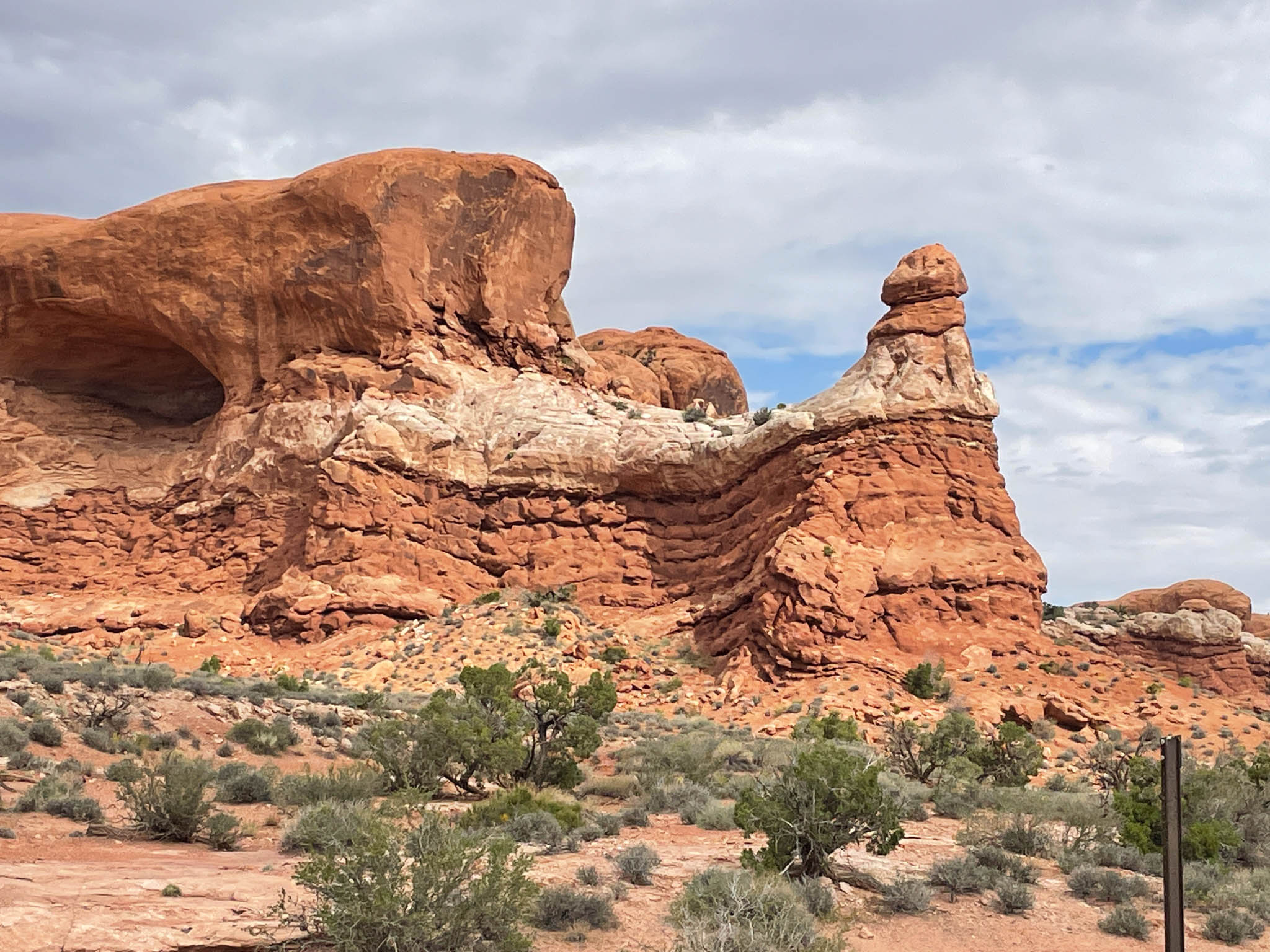 I got lucky with the weather this round. Instead of bright blue skies, I had a lot of cloud action going on during my stay. I played with lighting and composition and got cool results (well, at least cool to me) because the sun wasn’t washing out everything in the middle of the day.

If you can get a camping spot inside the park, take it. It was worth the work and wait to score one (thanks CampNab and those who suggested it) because I was inside the park 90% of the time. This meant I could avoid the inevitable daily road closure (usually by 10AM). Yes, that many cars were inside the park by mid-morning, and so the entry road would be closed until mid-afternoon, meaning no park for latecomers.

The campground is spread out over a single loop, with some sites having amazing desert views and a few with a decent cell signal. Mine had neither of those, but I did catch the full moon rising in the east with the deep blues and purples of the sunset to the west. For a long while, I just stood in front of my trailer, turning my head one direction and then the next, savoring the subtle beauty of both scenes. 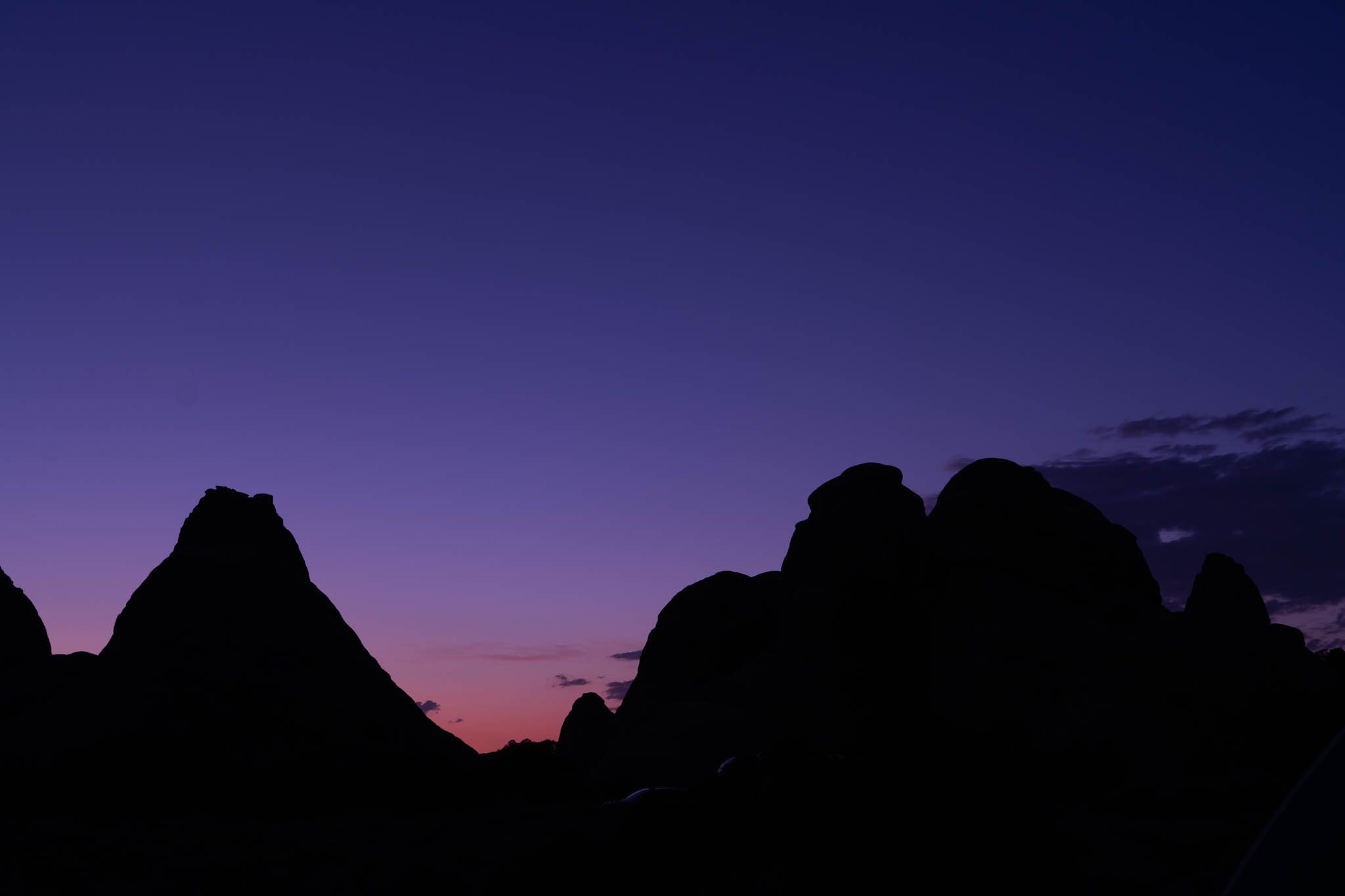 My best outing was at the Windows section, where parking was a “just” a 20-minute wait for cars ahead of me to take each remaining slot before it was my turn and I could parallel park on a sliver of shoulder just before the exit back to the main road. Hey, at least there was parking; I had been shut out of Devil’s Garden by 9AM as well as every other stop between there and Windows.

I walked the paths to the North and South Windows arches, then over to Turrett Arch. My favorite, however, was Double Arch (below) because it was just freaking massive in size. And by that I mean it is the tallest arch at 112 feet (34 meters) and the second longest arch in the park, at 144 feet (44 meters). I left the people in this photo to give you a sense of scale. Yes, those little white and light-colored dots in the lower middle of the image are people. This is one big rock sculpture and it was amazing to get up close and personal with it.

This is a close-up of the right side of the North Window arch. Look at all that rock action: the slicing and dicing going on and yet the arch remains intact over millenia (at least so far). 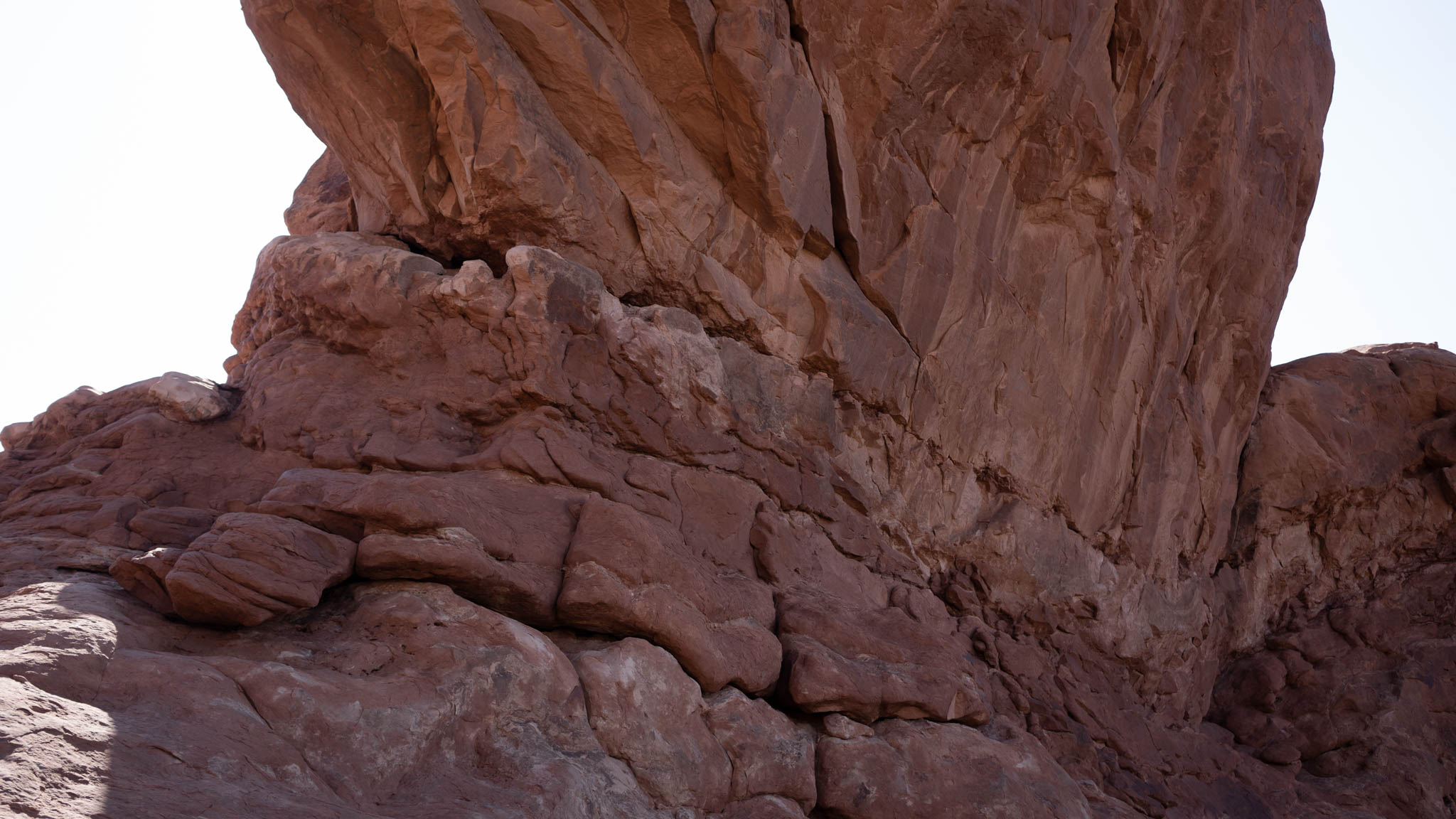 On the last morning of my short time at Arches, I walked the trail out of the campground towards Tapestry Arch. Less than a mile long, this stretch of trail was deserted at 8AM. I silently followed the line of cairns, scrambling across a series of flat rocks until I reached the arch itself.

I’d timed it just right. The early morning sunlight was just hitting the arch. There was no one around as far as I could see or hear. Just me, that magnificent arch, and the desert land beyond it, stretching to the far horizon. No crowds, no selfie-takers, no one at all. Just me and all that space and silence. Of all the magic moments I would have in Utah, this one is probably my favorite. After two days of dodging hordes of tourists like me and trying to find parking spots, being able to enjoy a private visit with an arch at sunrise was simply the best.

I savored my sunrise time as long as I could, until my rumbling stomach reminded me that breakfast awaited, as did the next set of campers who would be taking my spot in the campground today. It was time to pack up, hitch up, and head to the next stop on my tour. My too-short time in Arches was up, but oh, what a time it was!

Arches National Park has the highest density of sandstone arch formations in the world, bar none. Why? Let’s start about 300 million years ago when this whole area was an inland sea, subject to drying out. And then all that sand and salty stuff got folded and compressed, followed by some serious uplifting. Add in 100 million years of erosion, and layers expanding when they got exposed, and this became the best place ever for arches to form. (This is a completely non-technical explanation of what happened, of course!).

Here’s a look at what layers are at Arches. Yep, all that arch forming happened in the Jurassic period, so  you might say this is the original and way cool Jurassic Park.

Standing there, gaping at this monstrous and inhumane spectacle of rock and cloud and sky and space, I feel a ridiculous greed and possessiveness come over me. I want to know it all, posess it all, embrace the entire scene intimately, deeply, totally…
Edward Abbey (Desert Solitaire, published in 1968)