I kind of punted on this part of the trip since the original plan was to boondock with friends just outside Arches. But when they couldn’t make it, I waitlisted myself for a Utah state park close to Canyonlands and boy, was that worth the wait. I ended up with 18 hours to see Canyonlands National Park and Dead Horse Point State Park, so I made the most of it, with camera in hand. Let’s go! 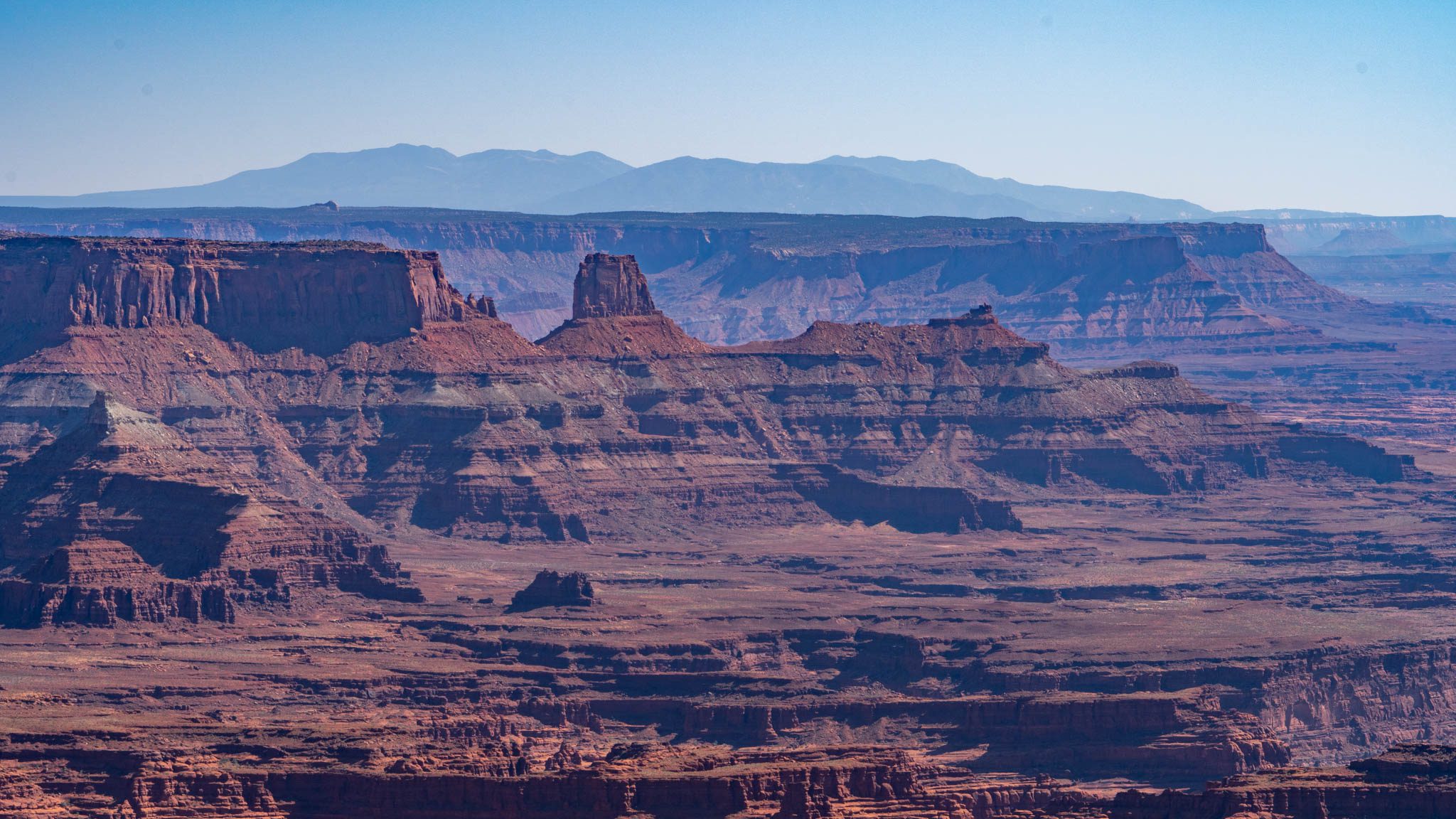 After driving into Dead Horse Point, mouth agape at the amazing landscape surrounding me, I quickly found my pull-through site and set up minimal camp. One night stay = minimal camp because I don’t need much for one night. I did have to unhitch, though, since the whole point was to drive around and see things. 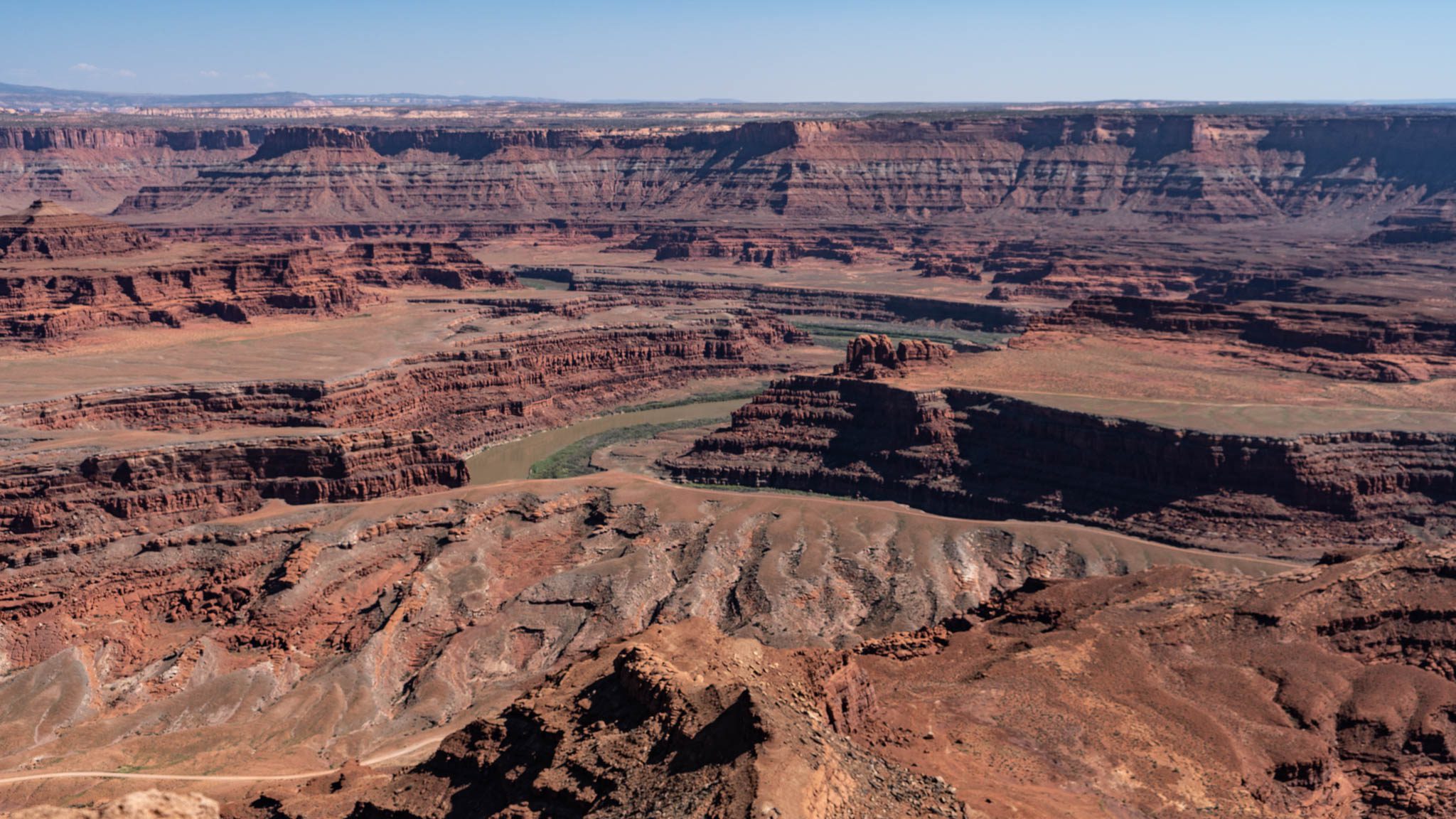 My first stop was, rather obviously, Dead Horse Point, which looks south and east towards Arches and Moab. To say the views were breathtaking would be a severe understatement. The image above the Colorado River looking east from Dead Horse Point. Somewhere off to the right, out of frame, is the infamous cliff where Thelma and Louise drove off into oblivion.

At the pullout just before Dead Horse Point, you get this view, looking over into Canyonlands. It sure whetted my appetite for more exploration. Time to head over to Canyonlands itself and what what I could from the road and the many viewpoints.

Given I was still feeling a bit weak, and my right knee was also feeling a bit wonky due to a misstep off a curb, I decided that the driving tour of Canyonlands would have to suffice for this visit. I was nearest the Island in the Sky section, north of Moab, which has a good driving loop with a ton of pullouts. My favorites were White Rim, Grand View Point, and Buck Canyon. 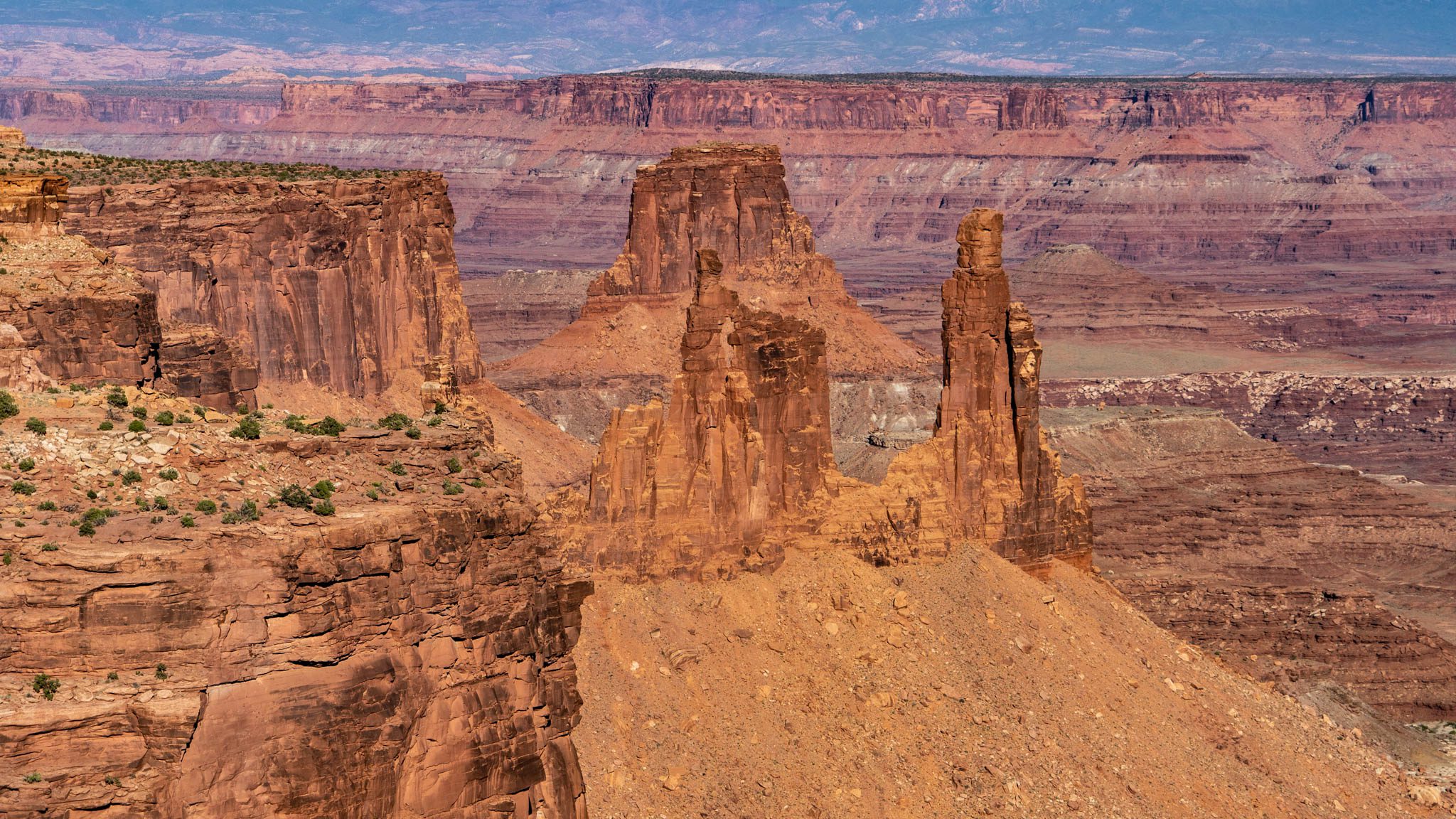 This was my first taste of the Colorado Plateau, and it sparked an interest in learning the geology that I’ll be working on for quite a while. Lots of great facts, like that the rocks here came from the ancestral Rocky Mountains and from the Appalachians. 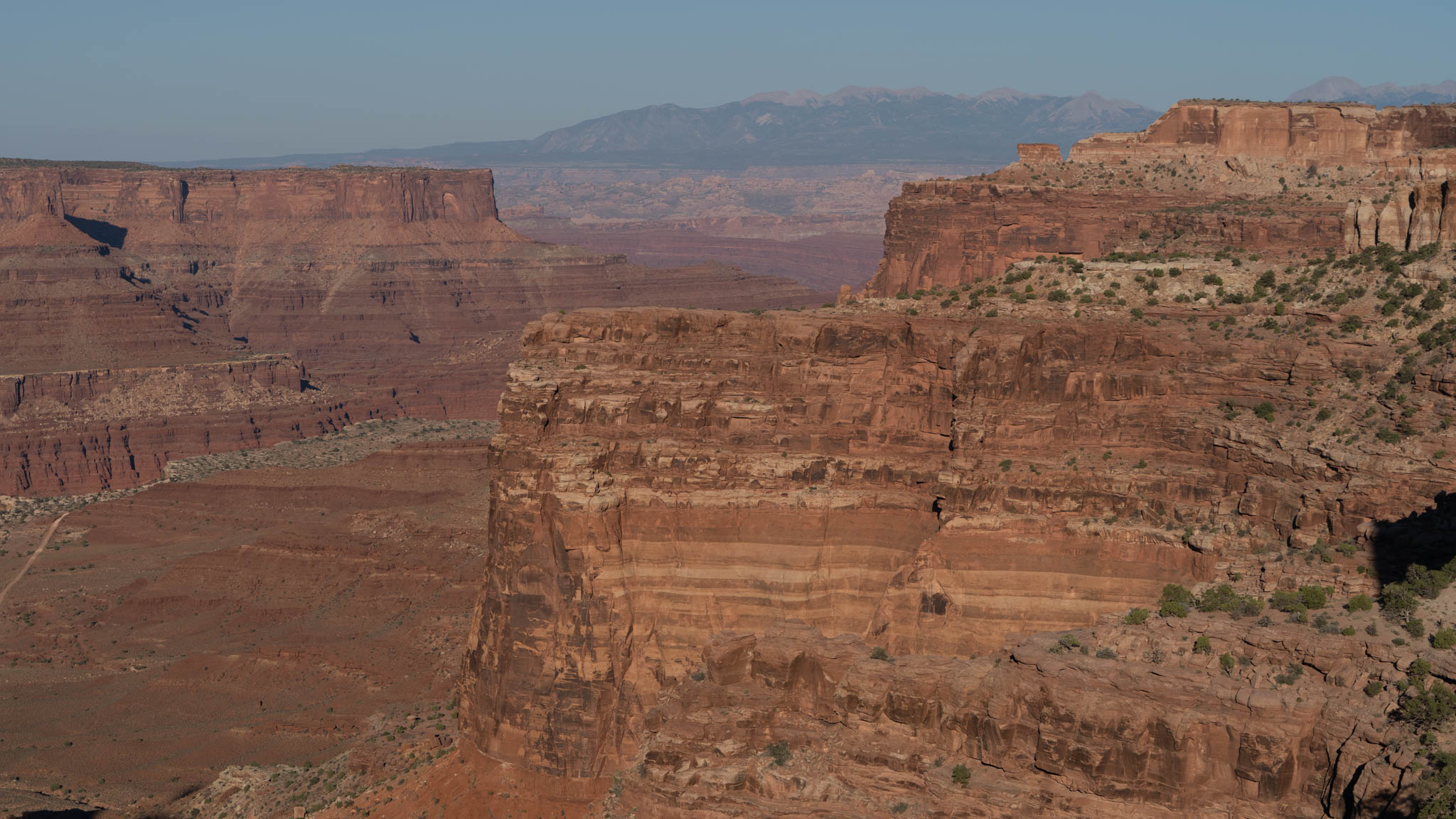 This place was also my first taste of what would become two recurring themes as I toured the National Parks in Utah: lots of people and lots of people taking lots of selfies. The image below is Mesa Arch, a famous landmark at Canyonlands because if you position it just right at sunrise, you get a great shot (you can google “Mesa Arch Sunrise Canyonlands” for some great images). After walking a trail littered with stones and dicey footing, I gave up on the idea of coming back at sunrise. 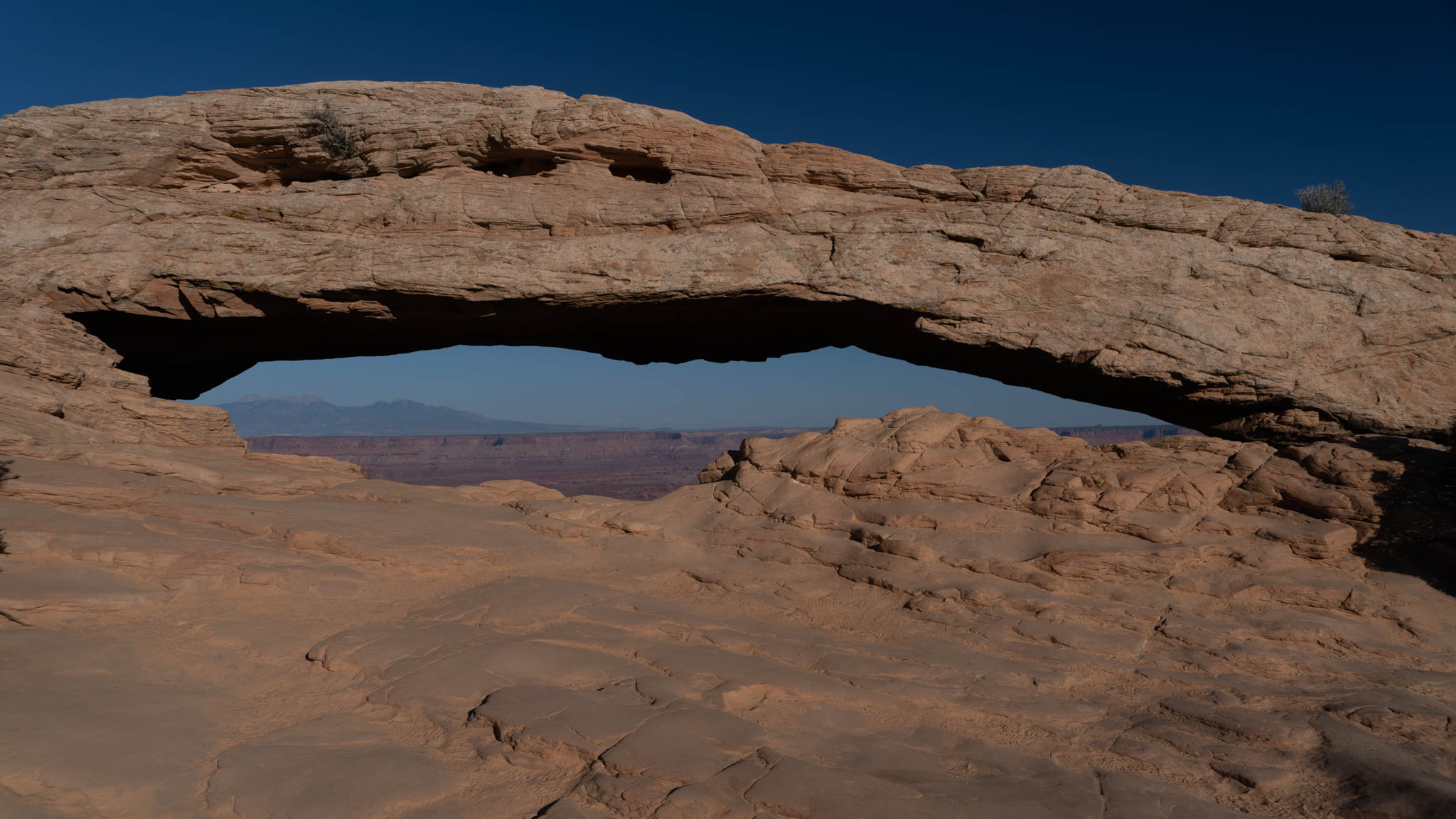 Here’s the larger picture of the arch, with people in it, which is a more honest perspective of what I saw. I only got the above image by waiting about 10 minutes till one group of selfie-takers was slow to replace the previous duo of selfie-takers and for about 15 seconds, my view of the arch was people-free. I did have to admire the way the selfie-takers lined up for their turn, and seemed to wait patiently enough for that duo to pose and pose and pose for their phone cameras. 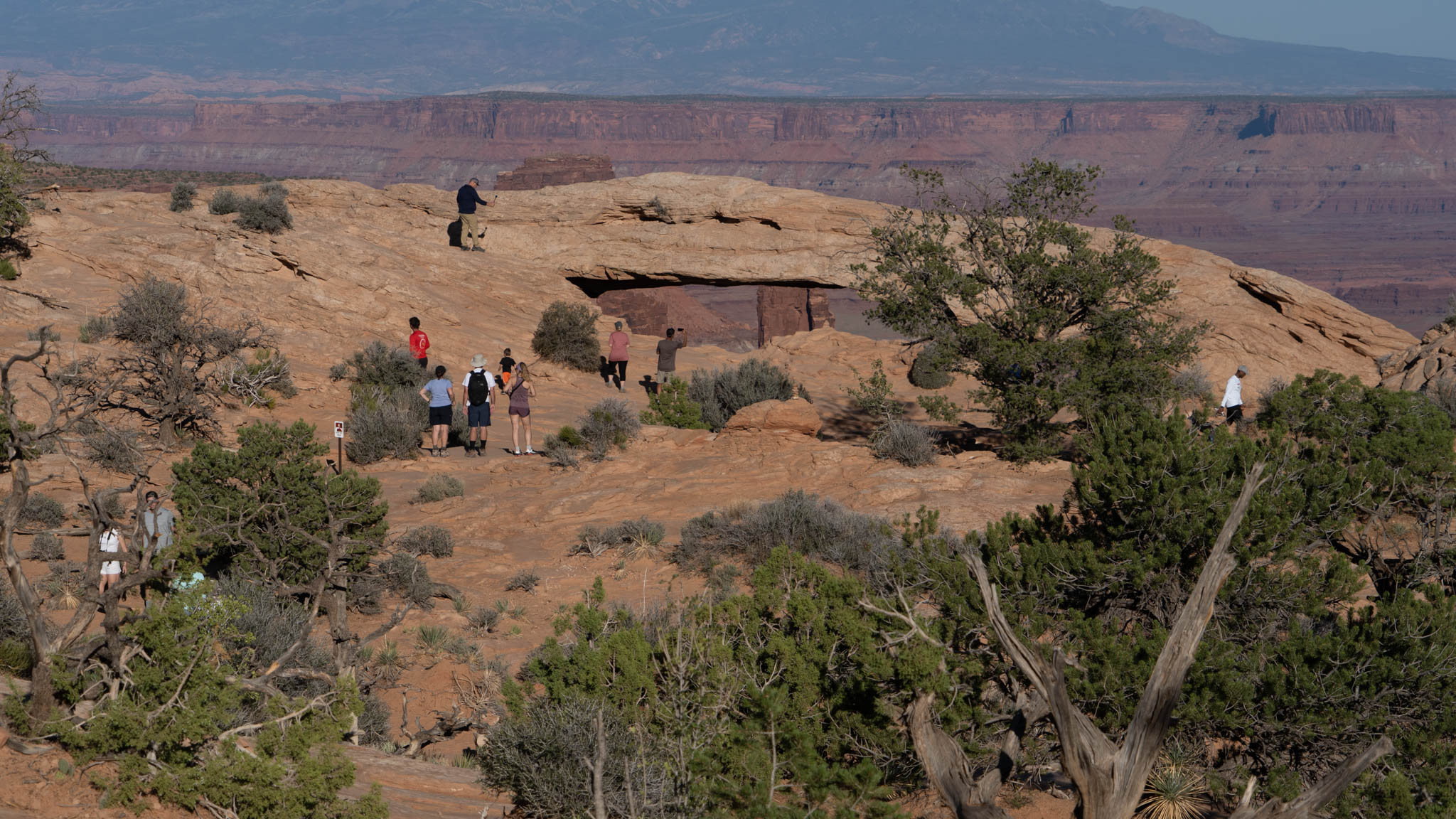 After seeing Dead Horse Point and Sunrise Arch, I decided it would be easier and probably way less crowded to hit up Dead Horse Point for sunrise the next morning. I set my alarm and had my camera equipment ready for that early wake-up call. Within 10 minutes of the alarm, I was dressed and jumping in the Ridgeline for the short drive down to the point. It was definitely more cloudy than the night before and I wasn’t sure what kind of a sunrise opportunity there would be.

Turns out a ton of people had the same idea as me, from the casual watchers chatting as they sat on the rocks near the parking lot to the totally serious photographers set up with tripods beyond the wall of the viewpoint. Far braver than me, that’s for sure, because I respect walls and fences on the edges of cliffs and mesas and don’t stray beyond them.

Oh, so slowly, the sky lightened and I chatted a bit with one photographer who was set up to capture the first golden rays hitting the La Sal Mountains near Arches. He and I were both foiled in our sunrise attempts, thanks to a thick cloud layer that swallowed up the sun about 30 seconds after it crested Mount Waas to our east. Sigh. Still, it was a cool image. 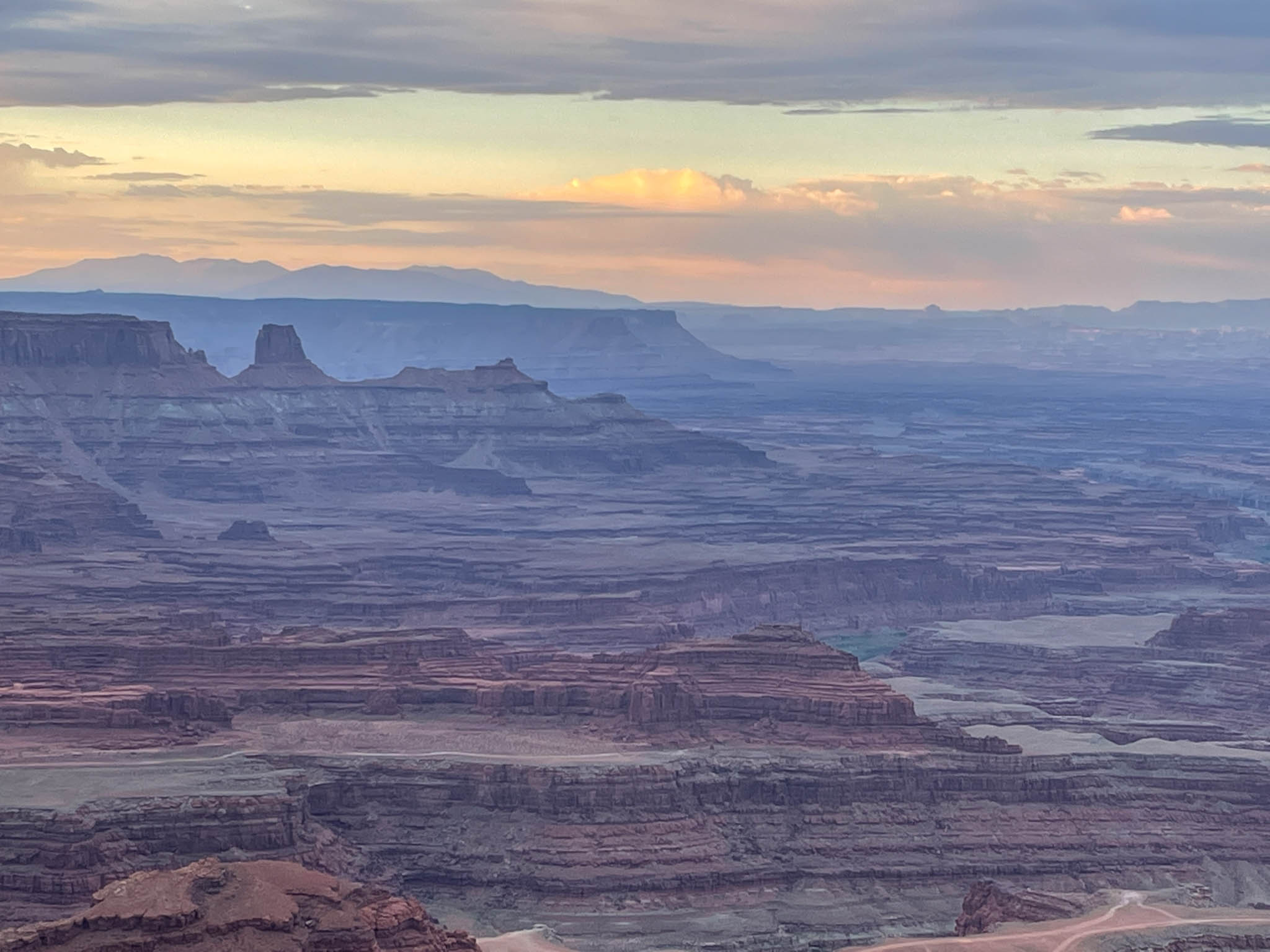 On my way back to the parking lot, the light was gorgeous on these trees, so of course, I stopped to take the shot. 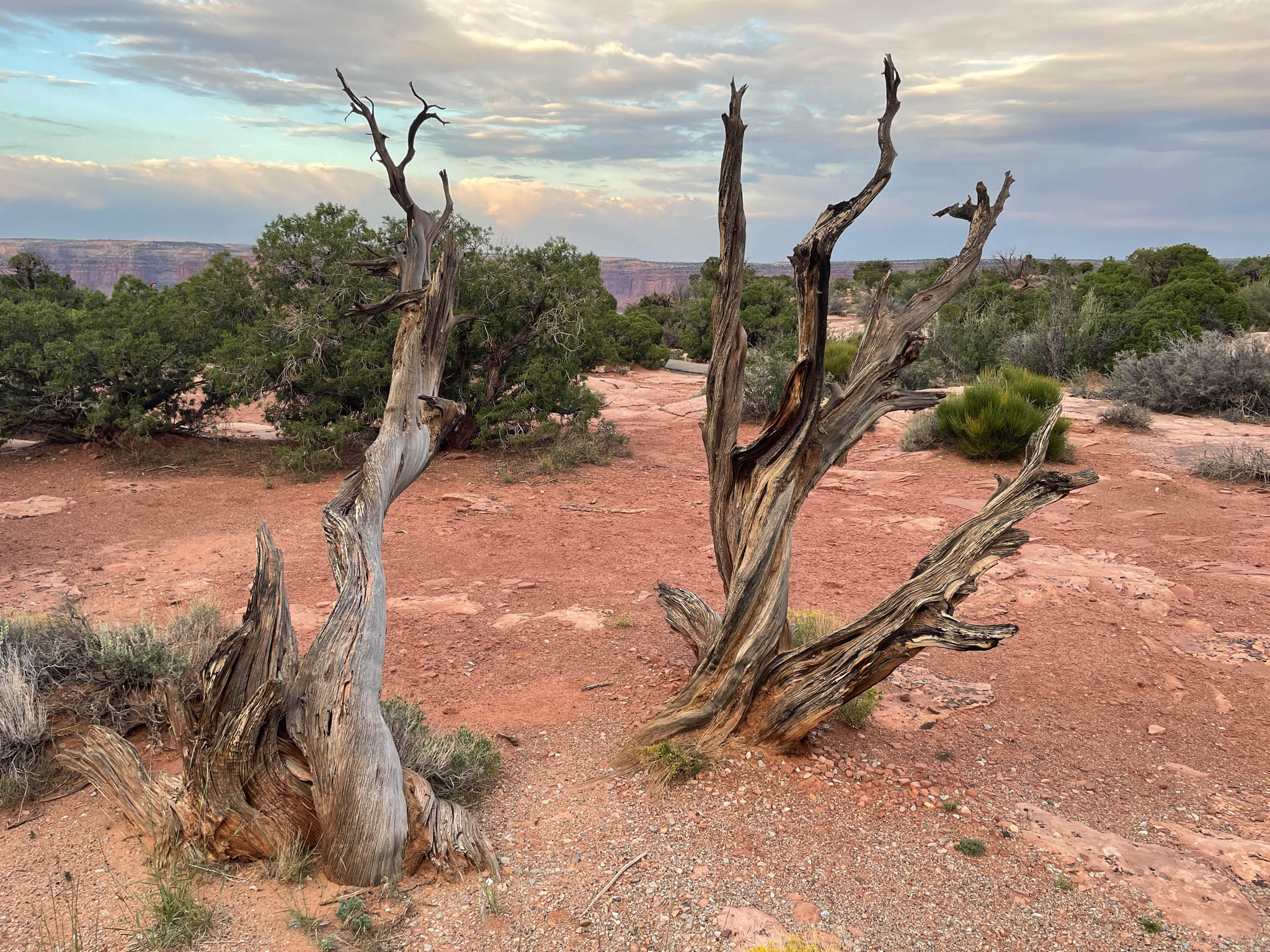 On the Road Again

And just like that, my 18 hours were up and it was time to hit the road for the short drive over to Arches National Park and the Devils Garden campground. Even the drive was scenic, full of big rock formations like this one. My eyes were full of delight as I savored the slow drive from Dead Horse Point. 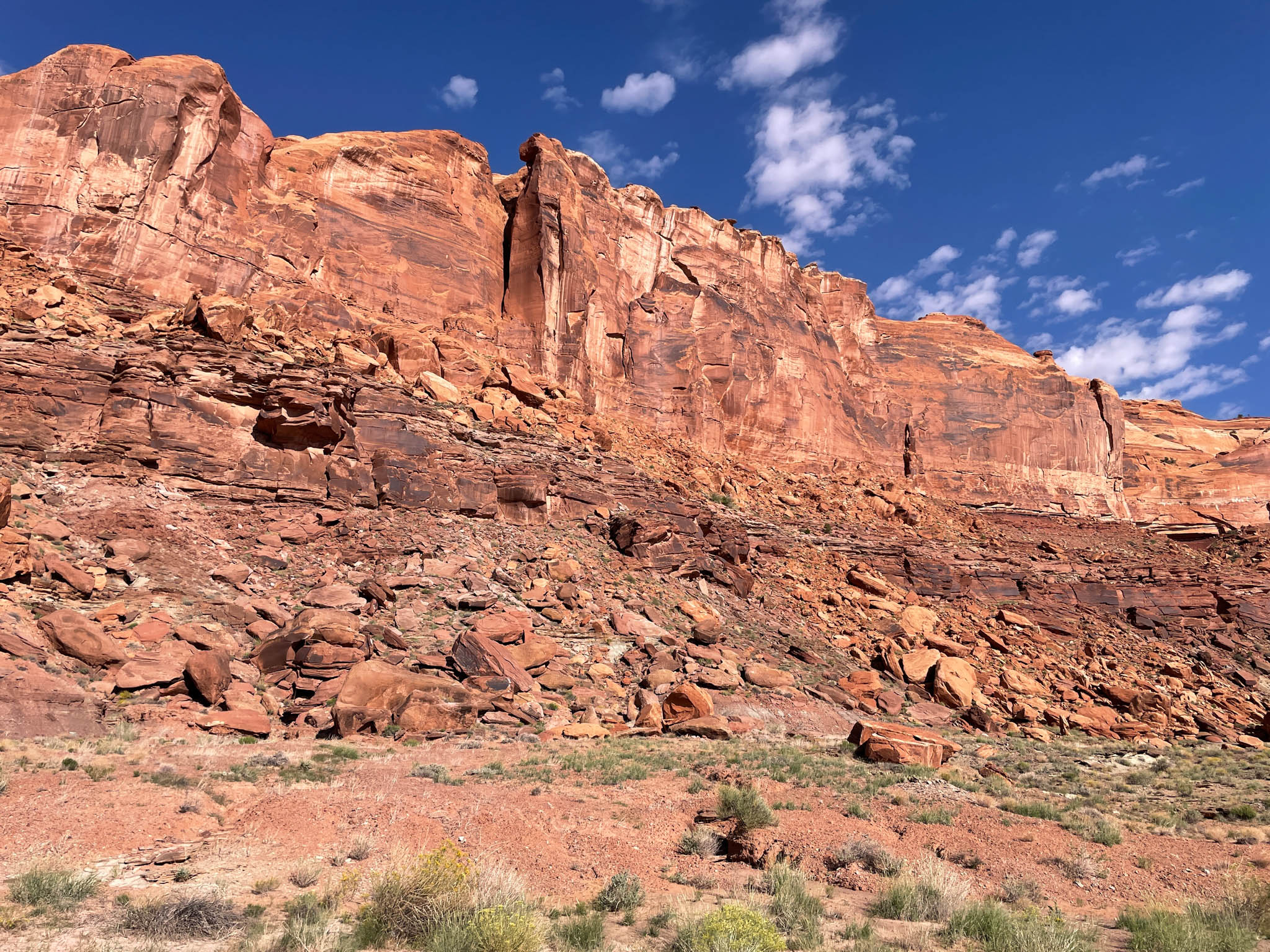 And it was a slow drive, in large part because there was a bike race on that road. One of my nephews is a serious cyclist and racer, so I always slow way down and give them as much room as possible, even if I have to wait a mile or two for a wider spot to safely pass. Share the road! (You can find that nephew, a doctor of PT with great videos and PT tips on Instagram).

Established as a National Park in 1964, the park has four separate districts: Island in the Sky, The Needles, The Maze, and the Colorado and Green Rivers.

This was the first park where I started to actually SEE layers of earth deposited over the last 300 million years. I bought a couple of local geology books and started reading them, looking at what I was seeing with new understanding. Here’s a good graphic of the layers at Canyonlands, exposed by the downcutting of the Colorado and Green Rivers.

Kind of puts us humans into scale. We’re like a little pixel at the top of that pile, at the very latest bit of the Tertiary period.

At a time when we hardly know what we can count on in a country of shifting values and priorities, Canyonlands is our bedrock, a geologic truth that we all share, the eyes of the future are looking back at us, praying that we may see beyond our own time.