In the pre-dawn darkness, I quickly dressed and downed a big glass of water, still working on staying hydrated at altitude. I started the Ridgeline and drove down to the parking lot at the edge of the dunes. Half a dozen cars were already parked and empty, meaning there were other fools up early, determined to experience sunrise on the dunes.

I walked out onto the sand flats, heading for the middle of the dune field. Although it was dark, there was already enough light to easily see my way. I was ready for sunrise at Great Sand Dunes National Park. After what I’d been through the previous 36 hours, it was a triumph of will to get to this moment. 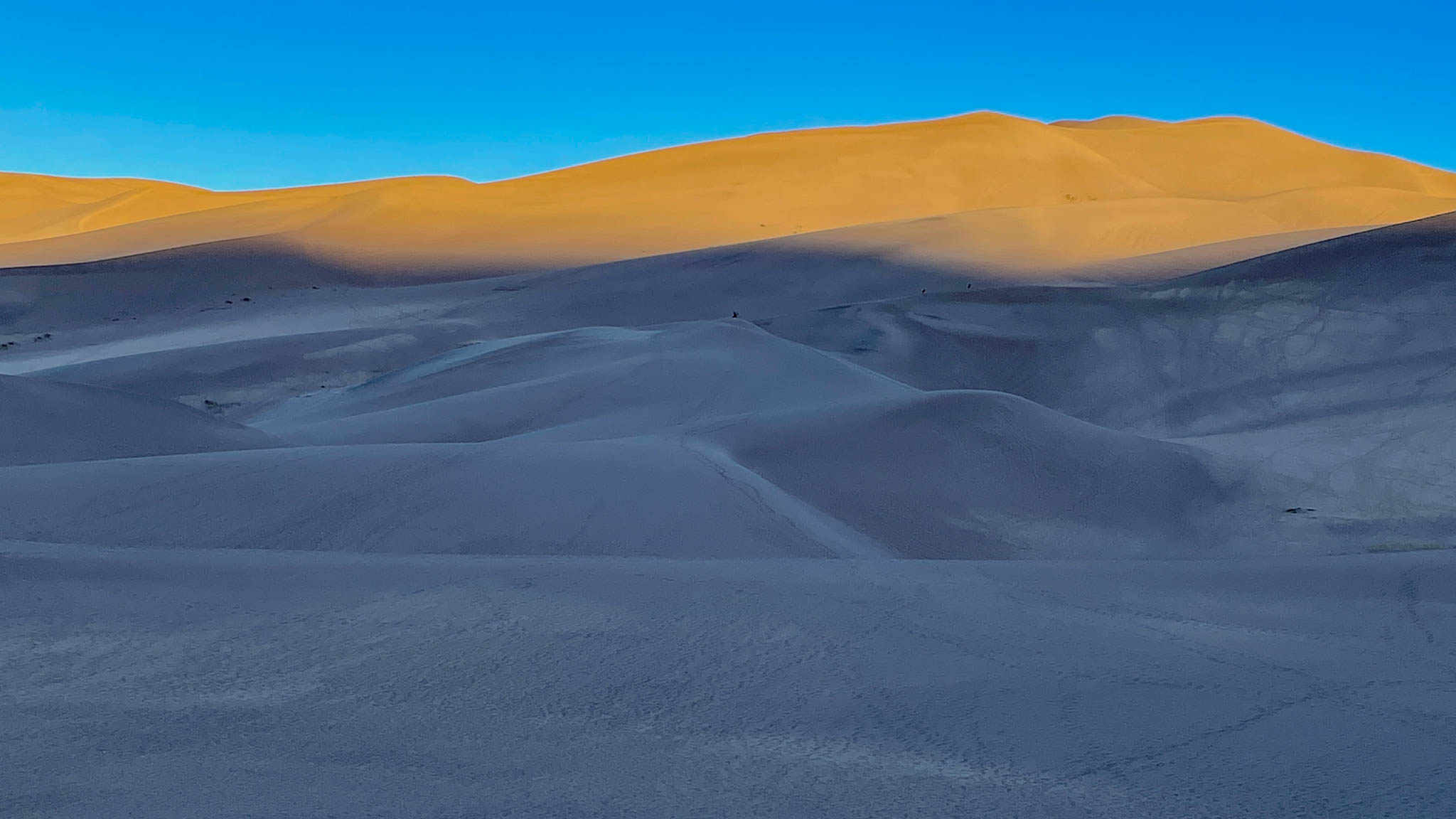 The trip had started off well. An easy drive from Cañon City, through Salida (where the Ridgeline was a champ on the mountain pass) and then down a two-lane highway with the Sangre de Christo mountains on my left and across the plains on my right, sixty miles away, the San Juans far off on the right. The plan was two nights at Great Sand Dunes National Park to kick off my fall trip. I’d seen White Sands National Park a few times, so I was eager to see how Great Sand Dunes stacked up to that legendary place. Although it would be hot (80-85F) during the day, the forecast was for cooler nights in the low 50s overnight, so I figured I would be fine without an electric hookup.

My campsite in the loop was in a tight corner, so backing the trailer in was hard and leveling was a job too. If I’d been thinking more clearly, I probably would have just gone the wrong way round in the loop and had a much easier time backing in but that didn’t occur to me. That right there might have been the first clue that something was definitely wrong with me.

By the time I got done unhitching and doing the minimal version of site setup, I felt overheated and exhausted. I hauled out my gravity chair ad sat in what little shade there was at 3PM. I drank a full bottle of water. I waited 15 minutes. I still felt miserable. I fumbled my way inside the trailer and laid down on the bed, aiming a portable 12v fan at my head. It was 90F outside and almost that hot inside. I was miserable from head to toe. All I could do was lay there and wait for the sun to go down, wishing that the world would stop spinning. The only time I got up was the visit the bathroom and contribute something to the black tank. 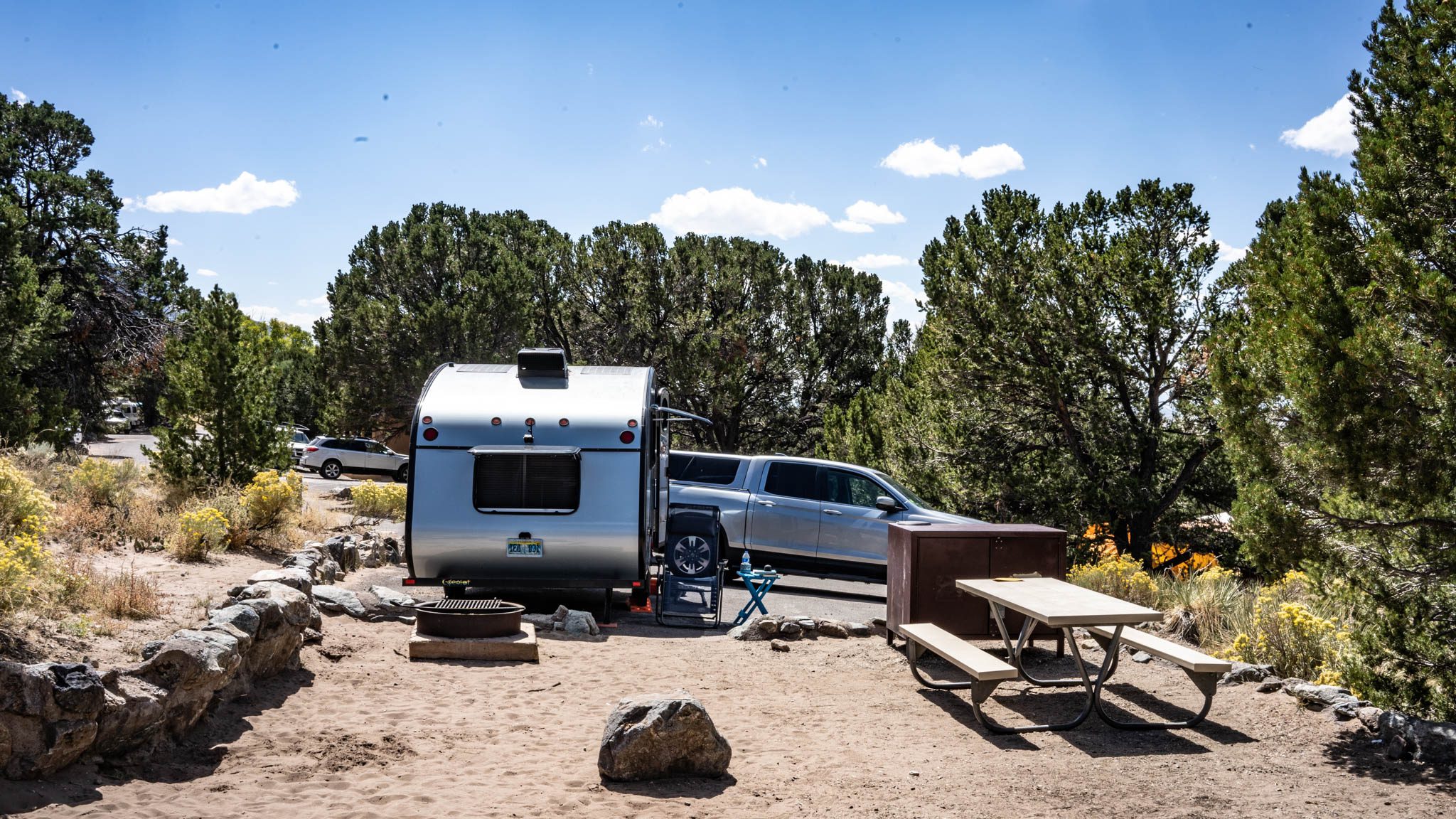 Every time I did have to stand up, I felt so dizzy that I could remain upright only by clutching the kitchen counter. I visited the bathroom more times that I could count, until it felt worse than my last colonoscopy prep. Food was the last thing I wanted but I hadn’t eaten lunch and now it was almost dinner time. Thinking this might be a combination of dehydration and altitude sickness, I made myself drink more water and have a few crackers, the most bland food I could come up with in my kitchen.

As darkness finally fell, the trailer started to cool off but I wasn’t feeling any better. I stood up to adjust the fans and realized I had about four seconds before those crackers were coming back up. I made it to the bathroom (which, honestly, is one step away from the bed), and then sat on the floor waiting for the waves of nausea to subside. After a while, I realized I actually felt better. Huh. I wiped my face and made a fair stab at brushing my teeth before falling back onto the bed and into the daze of sleep.

I woke up sometime in the night with the moonlight shining on my face and realized I didn’t feel like dying. Maybe this wasn’t dehydration or altitude sickness. Maybe my body had been working really, really hard to eject whatever bug I had picked up in the last few days, perhaps on that scenic train ride in Cañon City, full of unmasked people.

The next morning, I moved slowly, making a small bowl of oatmeal and a cup of hot tea. I wasn’t sure how my stomach would handle it, but I did feel slightly hungry. And then I took another long nap.

By afternoon, I felt slightly energetic enough to walk the campground loop and see if my legs and balance would hold up. As long as I moved slowly, thinks were OK. When I got back to my trailer, I saw someone just coming off the trail next to me with a camera. Hmm, I thought, I wonder what’s out there. So I took my camera out of the bag and made my way down the trail. Wow. That guy was definitely on to something. 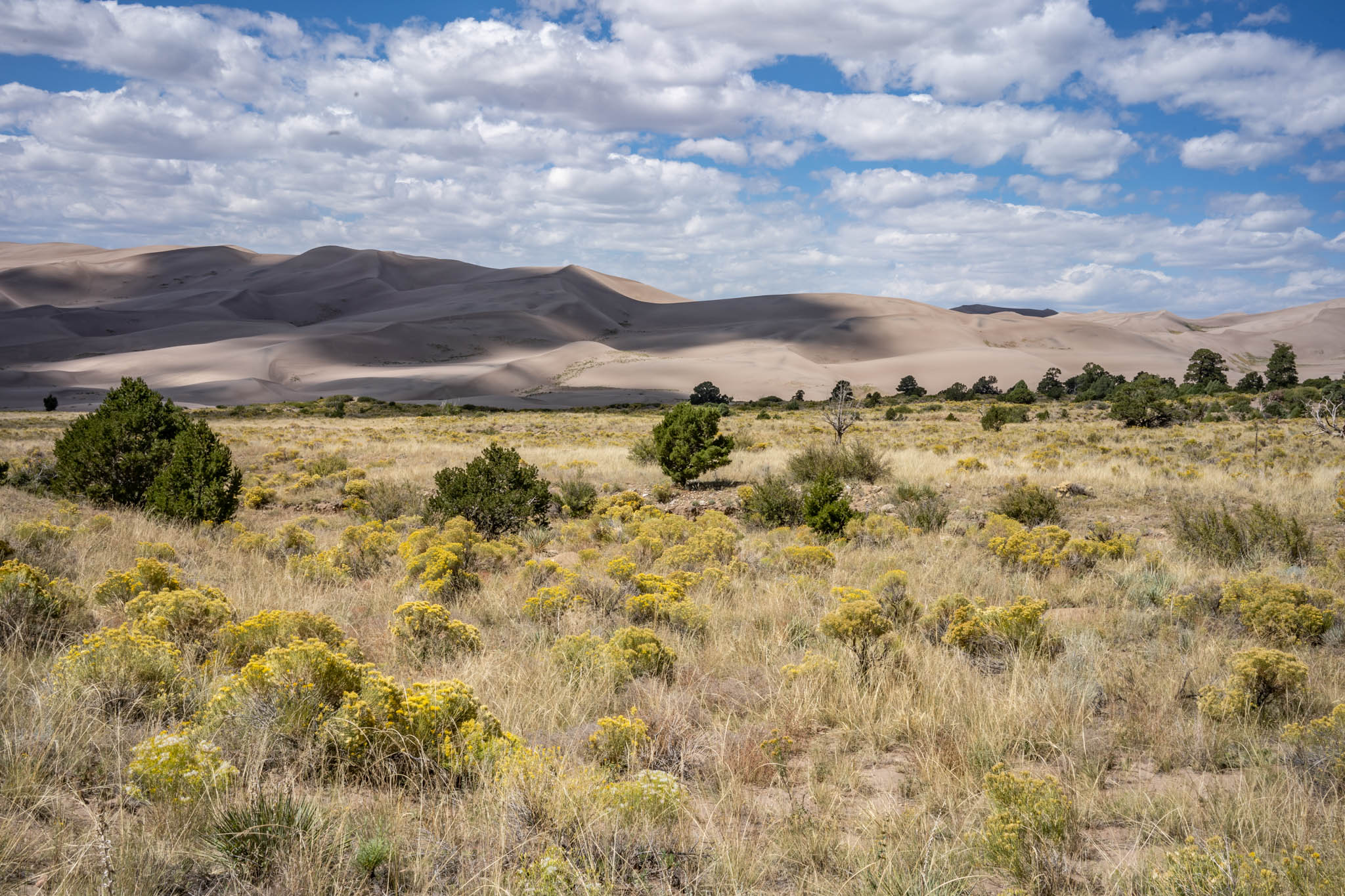 All that activity (hah!) had worn me out, so I sat in the shade in my gravity chair and read for a while. And then, realizing how peaceful it was, I just sat there, reclining and resting for I don’t know how long. Just birds and wind and the buzzing of a little flying cricket thing.

That night, I went back out well after dark, hoping to see night sky wonders. Between the thicket of trees and the bright moon, I was out of luck. As an alternate plan, I decided to get up before sunrise and see how the dunes looked as the sun came over the Sangre de Christo mountains to the east. With my camera ready and my clothes laid out, I made it another early night. But this time, I felt better and I had a plan to see at least some of the Great Sand Dunes before I headed out the next morning. 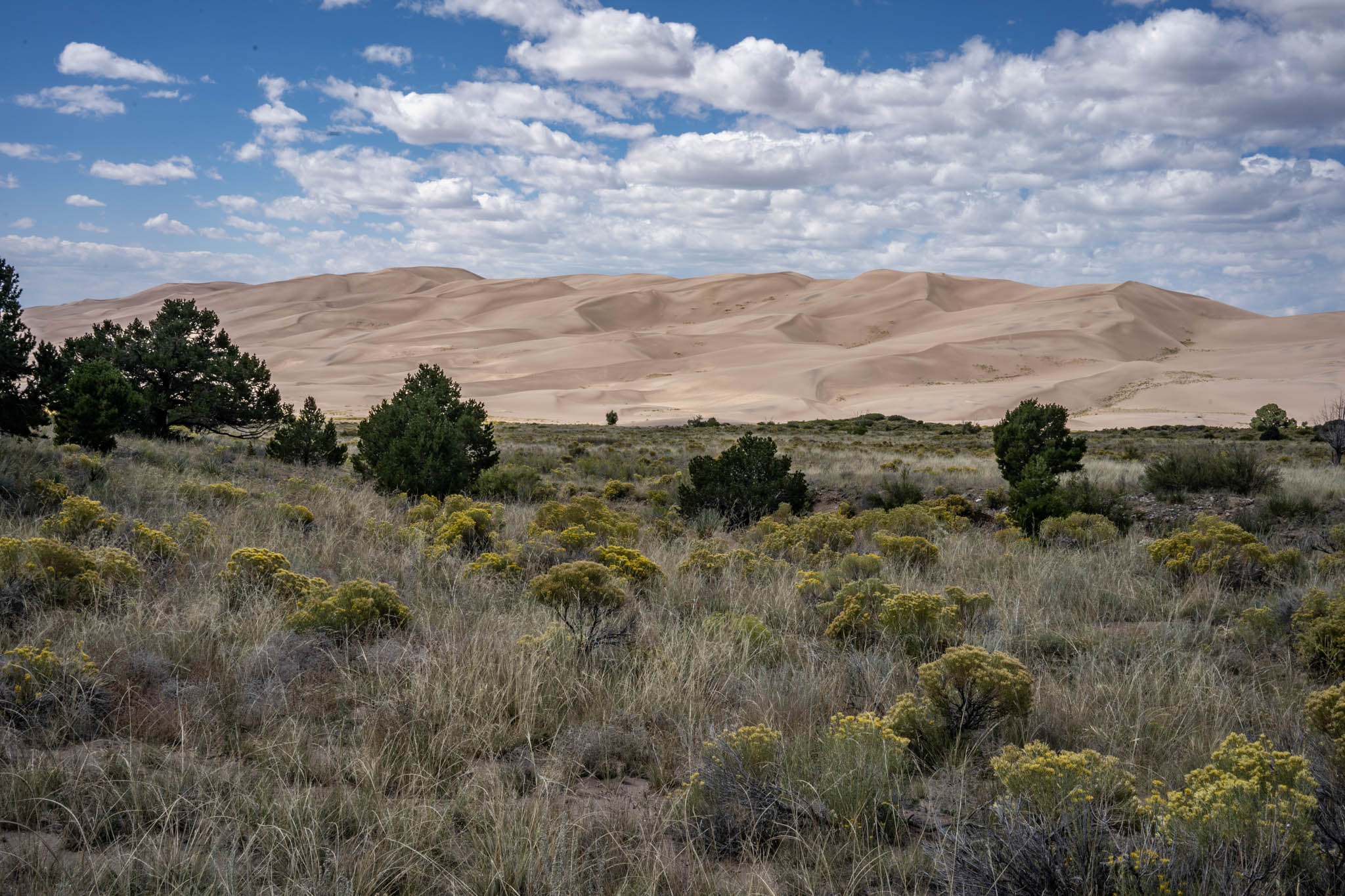 Small groups of people were already climbing up the big dunes, heading for the top before the heat of the day. I watched them become smaller and smaller dots as they moved upward, thinking that might be me on a different day but knowing that today I would stay where I was. 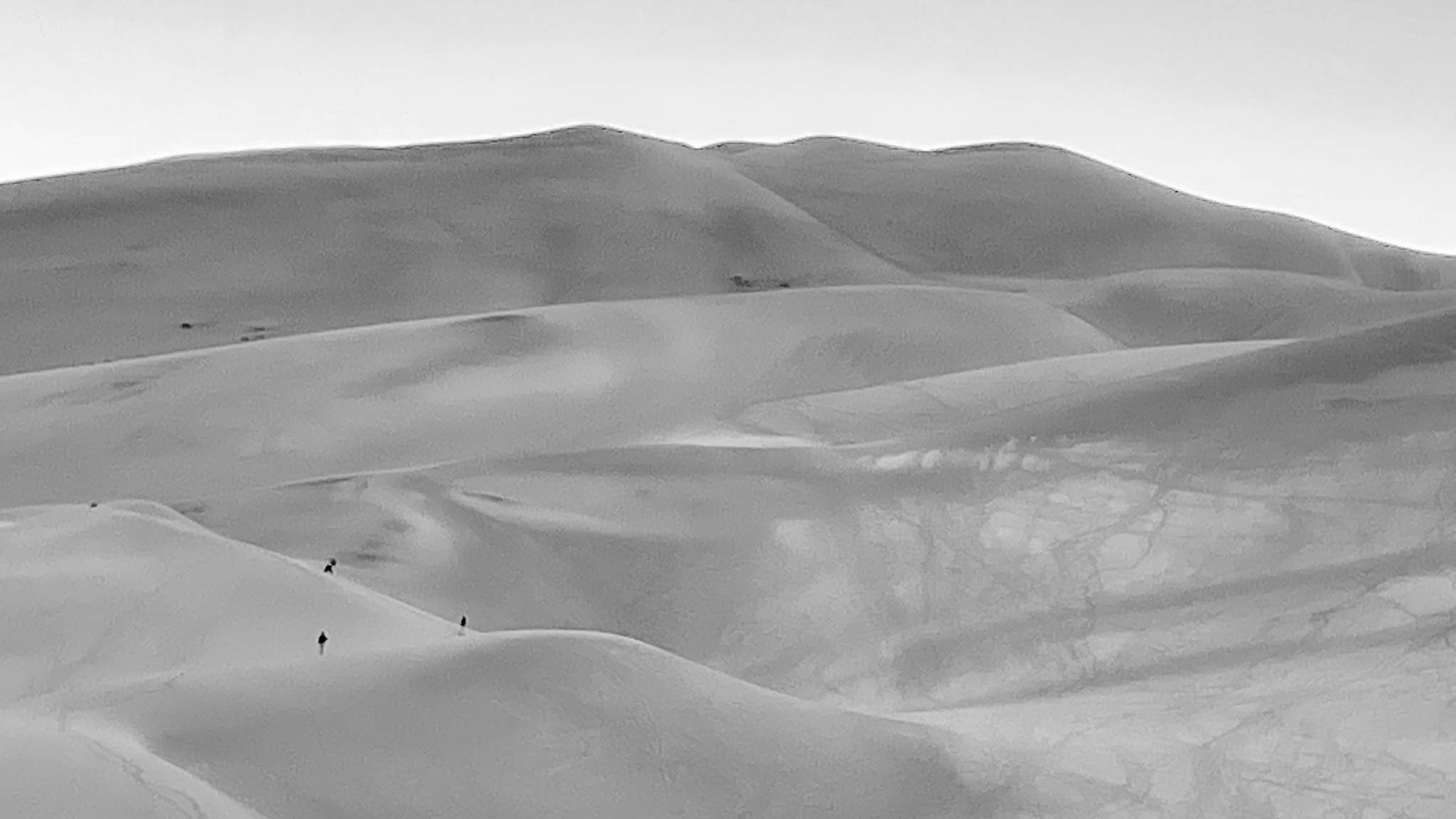 Slowly, the darkness softened, and the dunes changed from dark grey to light. The blue line on the flat horizon to the west turned a delicate pink as the first of the suns rays made landfall. The sun tipped the top of the dunes a few minutes later.

As the light spread slowly across the sand, the shapes were mesmerizing and I stood in wonder at the silence, the space, and the light. It was a magical moment. 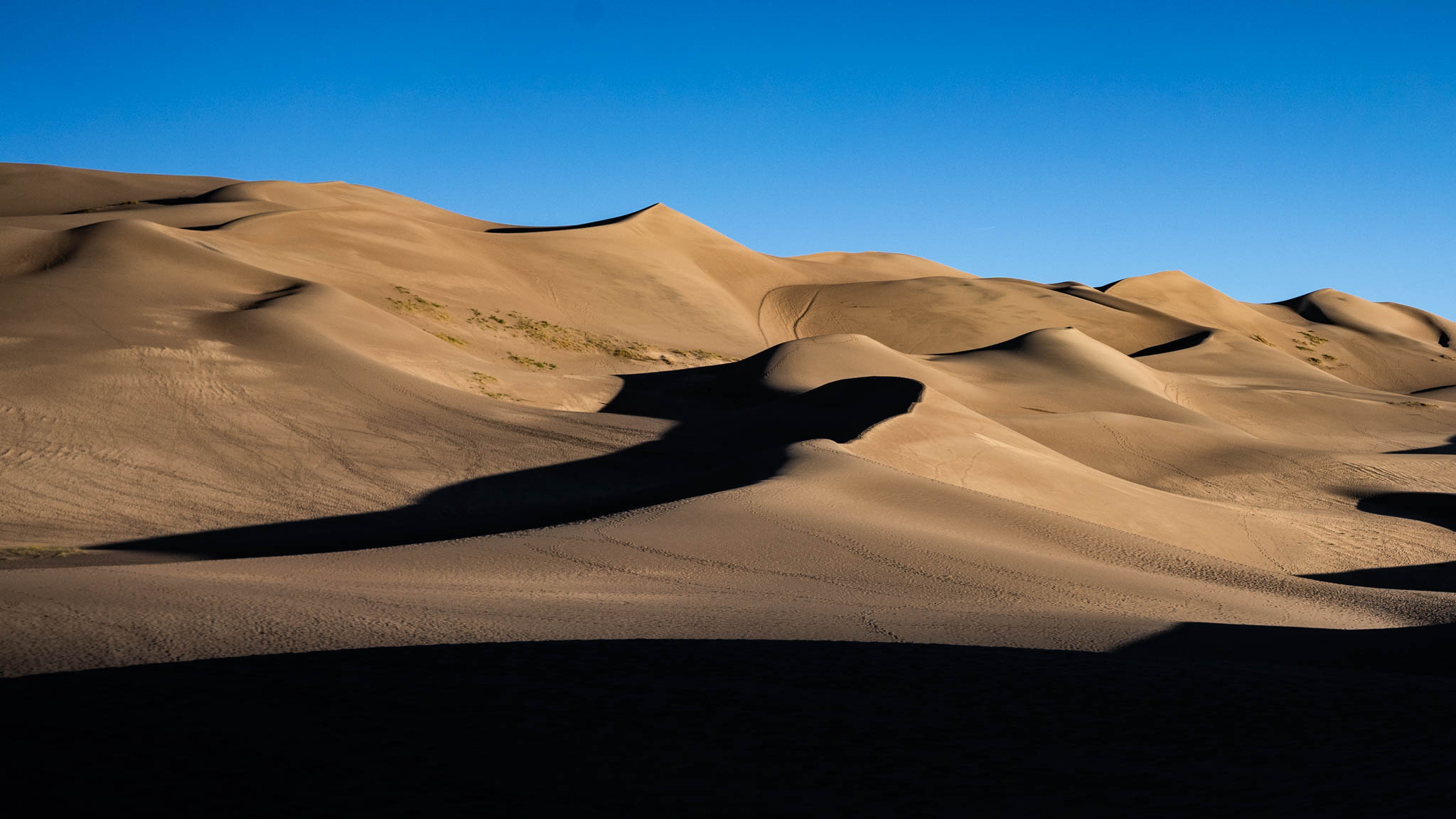 I went back to my campsite, ate a bit of breakfast, and slowly, carefully hitched up to move on to my next stop, Mesa Verde National Park in Colorado.

My first stop on this trip didn’t go at all to plan. No hikes, no explorations, and barely one experience of the dunes. But, and this is part and parcel of the vagabond life, I got through it by a combination of self-care, stubbornness, and tenacity. Some might argue that the latter two are the same thing. I don’t think so: stubbornness in this situation was about getting through the tough moments without breaking down and wanting someone to swoop in and rescue me. Tenacity is about persistence, trying as much as I could to see this place despite the physical limitations I had to deal with.

I’ve had a few sick days in my five-plus years of the vagabond life, but honestly, nothing as miserable as that first 24 hours at Piñon Flats. I did spend a few hours during the worst of it wondering if I should find an urgent care place and then realizing the nearest one was 45 minutes away and there was no way I could drive that far. Would I finally need the Good Sam Travel Assist I’d invested in last year or could I tough it out and see how I felt in the morning? As a solo traveler, I didn’t have a partner or camping buddy to help me out. No one to back the trailer in and put up the awning that would have kept the raging afternoon sun off the side of the trailer. No one to commiserate with me or coax me to drink water and nibble on a few crackers for strength. No one to celebrate when I felt less like dying the next morning, either.

But, that last morning, I did have that solo moment of bliss. 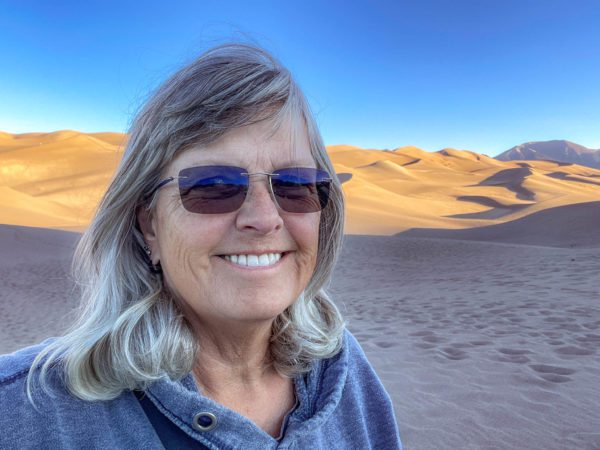 The sand came from the San Juan Mountains, 65 miles *west* of the dunes. Larger sand grains and pebbles from the nearby Sangre de Christo mountains on the eastern edge of the dunes joined the pile, which was actually a lake that covered the valley floor, more than 400,000 years ago. As the lake dried out, the prevailing southwest winds pushed the sand up against the mountains. When storms came from the northeast, through the mountain passes, the sand was blown back, piling the dunes up on themselves.

We are all born alone and die alone. The loneliness is definitely part of the journey of life.