Back to one of my happy places on this earth, the Porcupine Mountains of far west Michigan, right at the shore of Lake Superior. Honestly, this was the place I’d planned my whole Great Lakes/UP trip around. I had such a magical time here in the fall of 2017 that I’ve wanted to come back ever since. 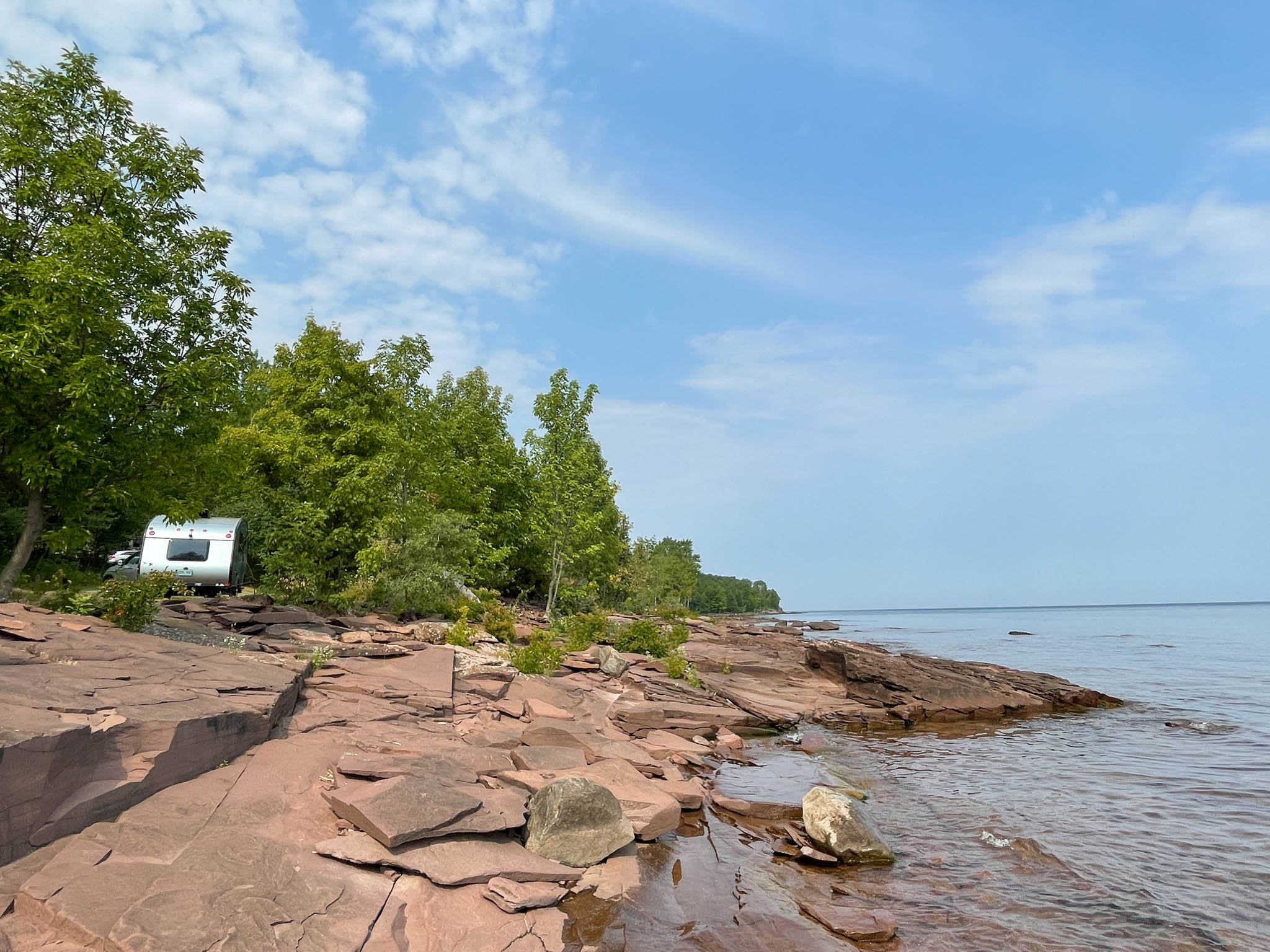 And this is why. Look at that campsite right next to the lake. There aren’t many of these spots, but it’s worth the time and effort to score one.

I mostly left the side window facing the lake open so I could hear the water lapping the shore as much as possible. This is as close to a beach house as I’m going to get in this lifetime so I was taking advantage of it. I left the back window shade (bed area) cracked open so that I would wake up to see the sunrise. Just like this… 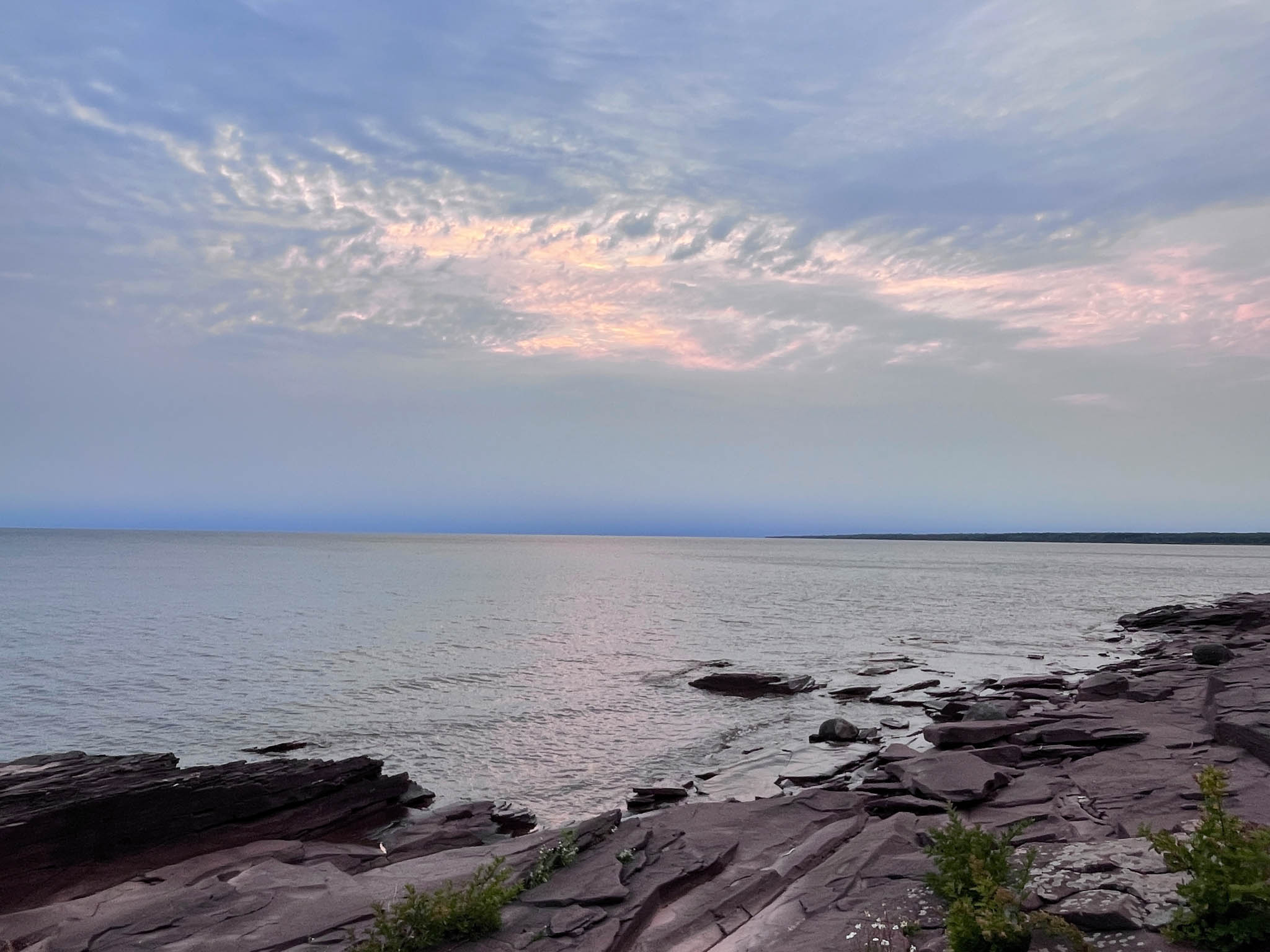 A bit later in the day, the actual sun showed up. The continuing Western wildfires (breaking my heart) were sending smoke eastward and it was clearly affecting the sunrises and sunsets in Michigan. It made me realize, once again, how interconnected we all are on this blue planet. 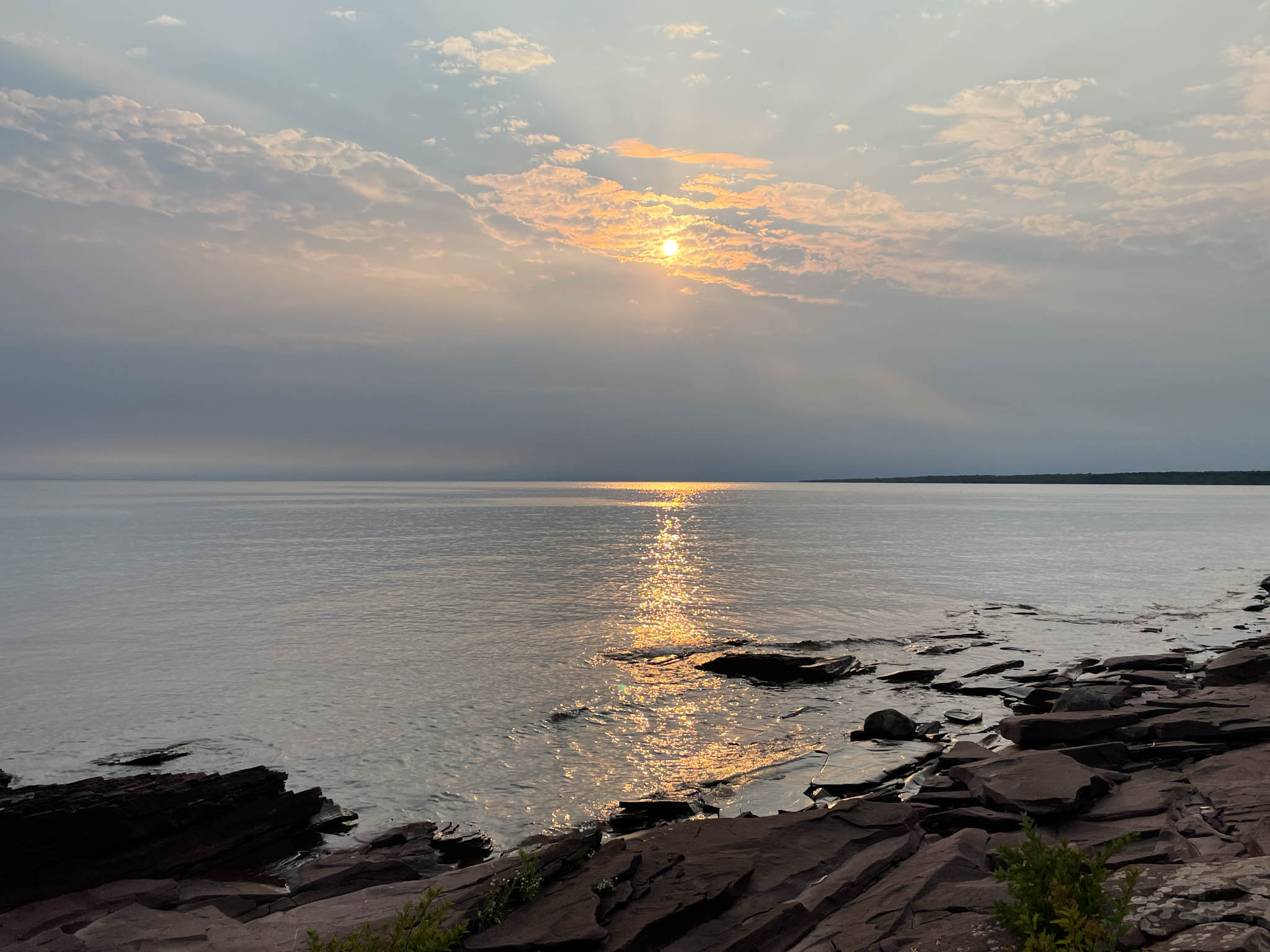 The sunset was a nightly event, where people would sit on the rocks here and wait for the show. I had a great view from the rocks next to my site and I don’t think I missed a sunset my entire stay. 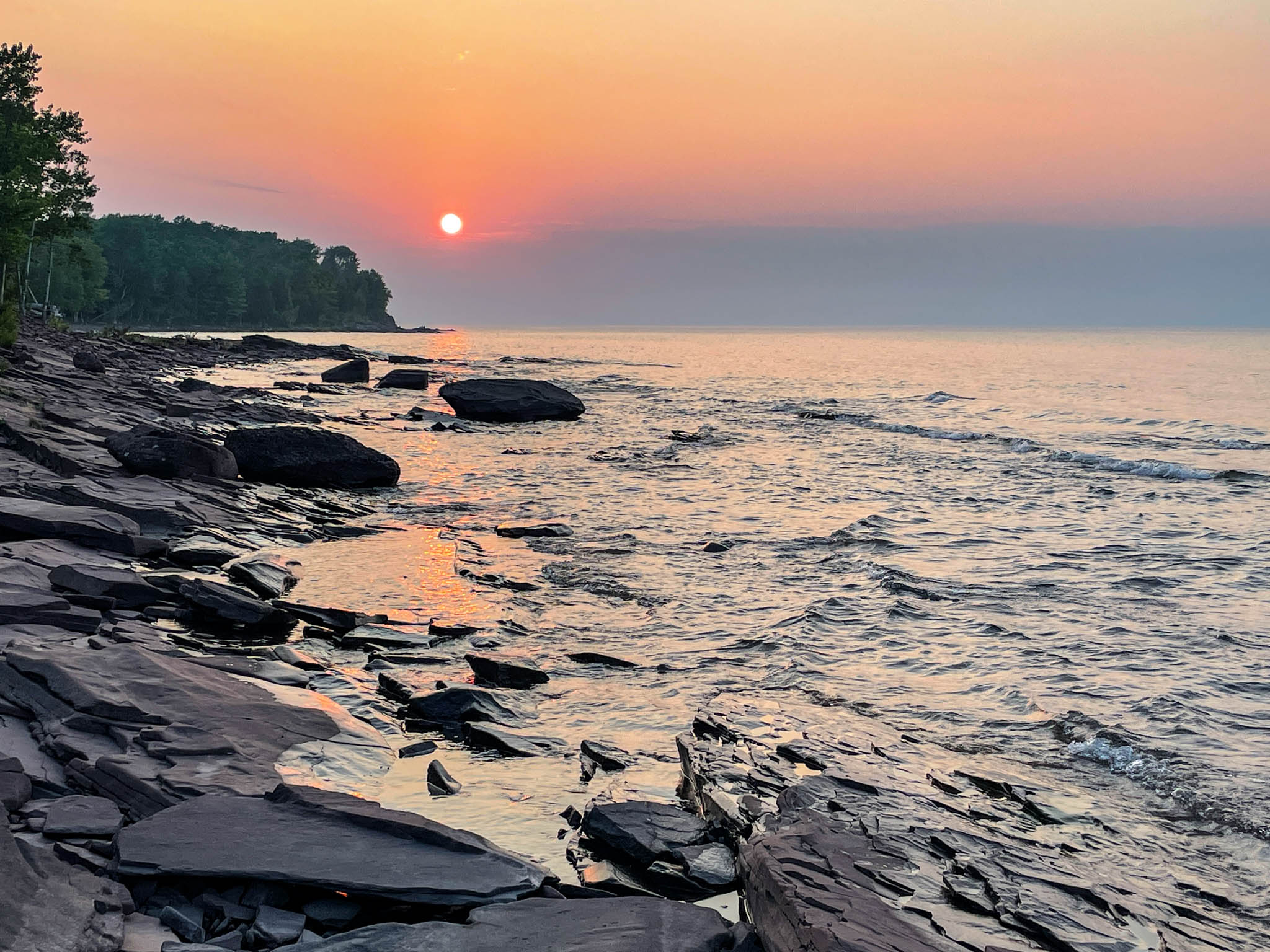 I did a few hikes, although the park was busy enough that trails and parking areas were packed with humans after 10 or 11 AM. So the trick was to get out there early or go late, which I did for a hike around the top area of Lake of the Clouds. 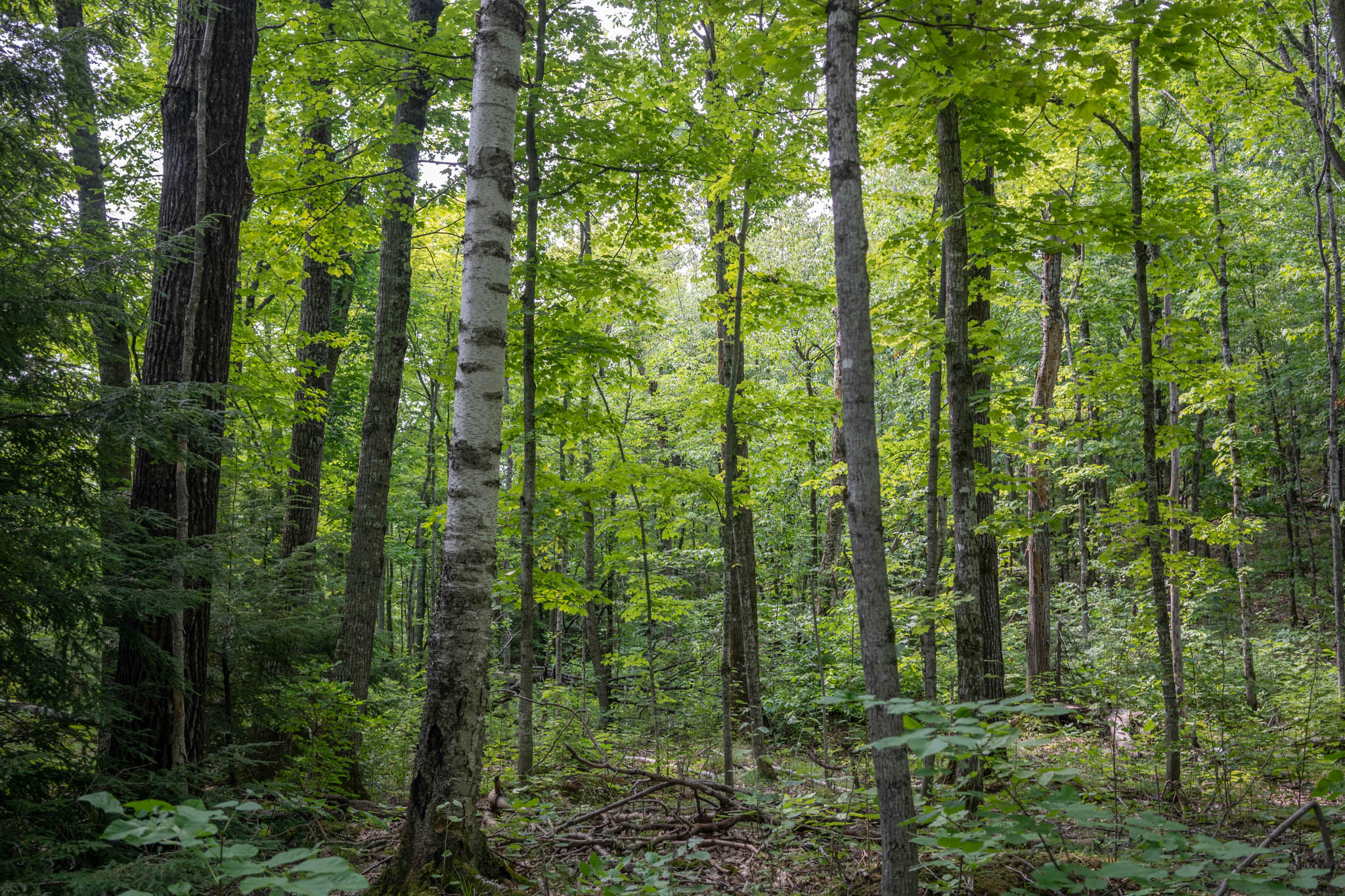 It’s a beautiful lake, and it’s actually pretty darned big, except when you compare it to that BIG lake just over the road. For scale, there are some humans in the upper left of this photo, nicely posing unaware that their real purpose was to provide a sense of scale for my photography. Well done, anonymous humans! 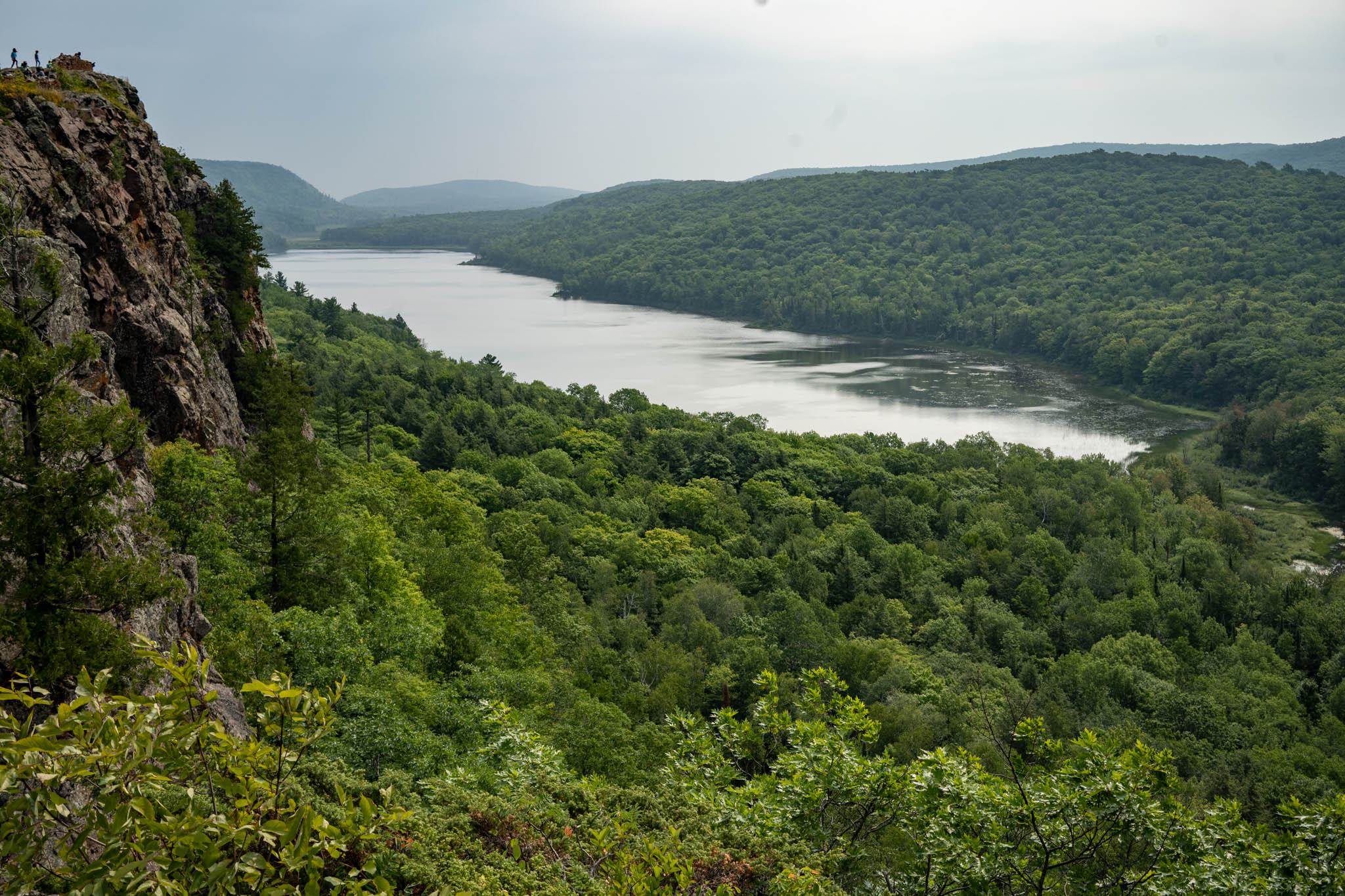 The second trail I took went down to the edge of the lake. Unlike most lakes I’ve visited recently, this one is wilderness: no homes, no cabins or campgrounds, no docks, no boats. It was pristine and I hadn’t realized how rare that is until I looked around and the only sign of humans was me. 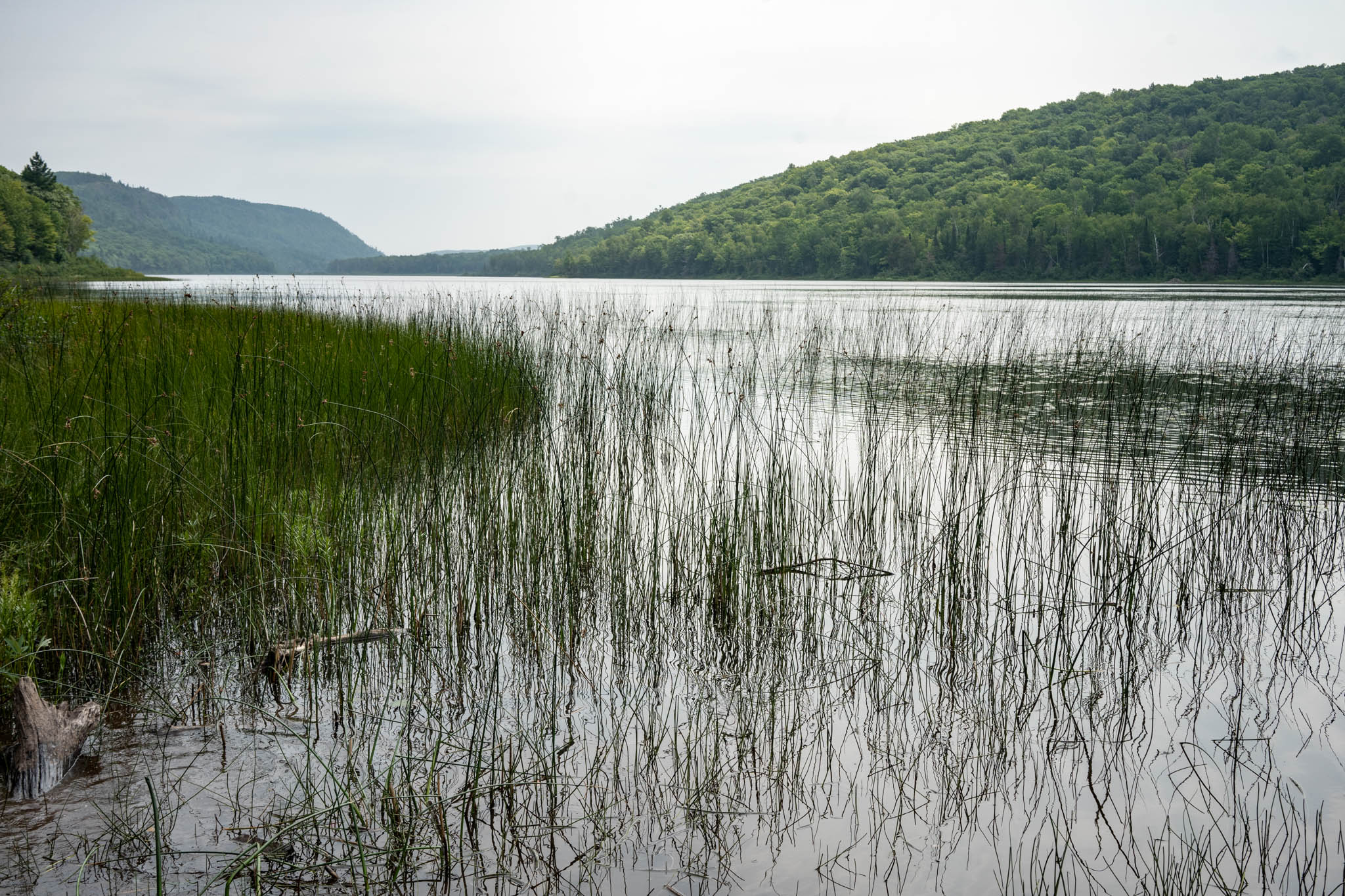 Ontanagon is the closest real town, meaning one with a grocery and gas station. It also has, of course, a lighthouse, because it’s on Lake Superior. So another lighthouse added to my growing total. I might need to make a map of these things to keep track of what I’ve seen. 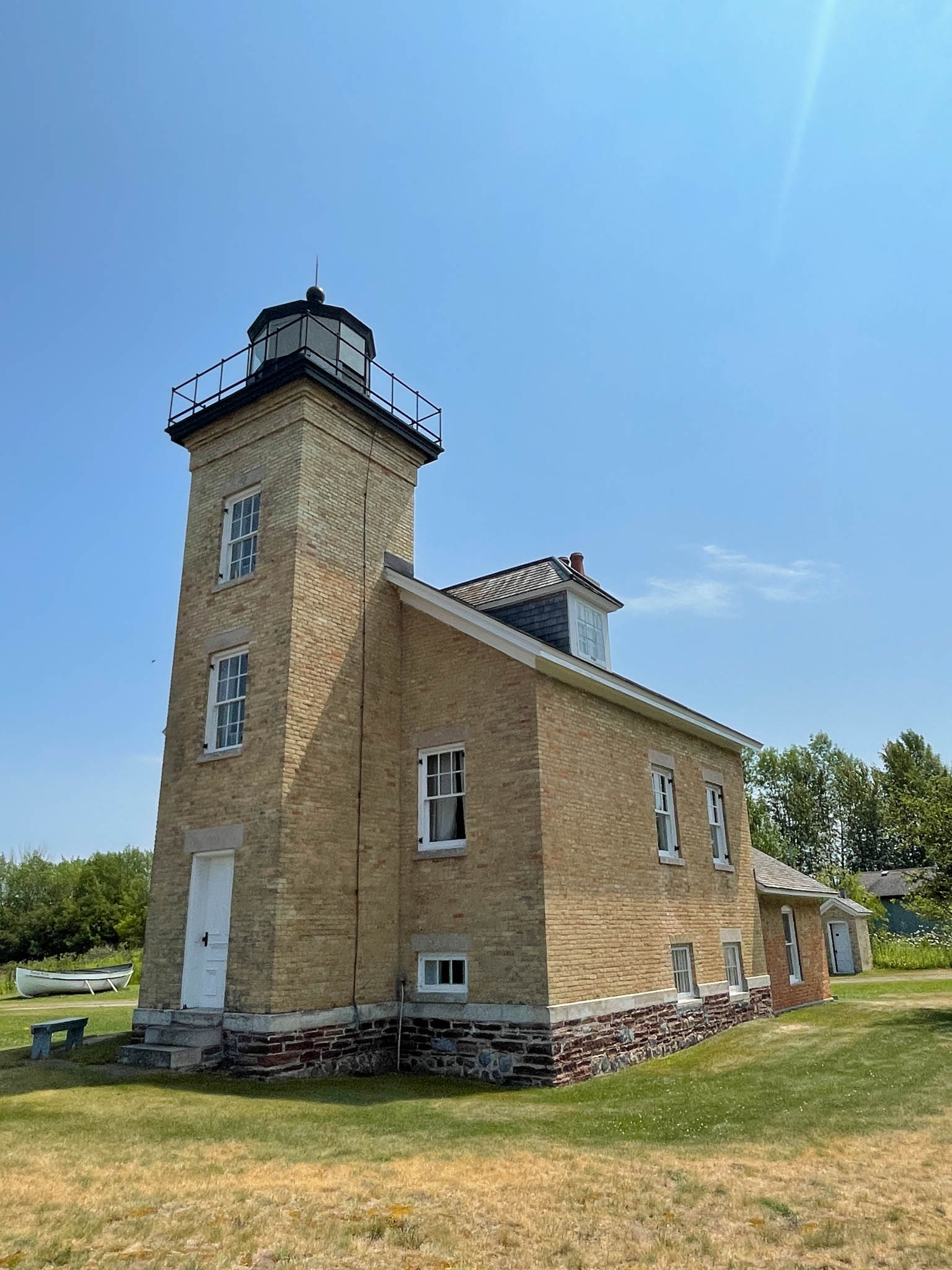 Back at the campground, one of my favorite views was this of Union Bay from the boat dock. I never managed to get my kayak in the water here: rain, wind, and for 1.5 days, a plethora of flies, some of them biters. Ugh. I can’t imagine what June must be like here, I could barely handle the day and a half of the little buggers. 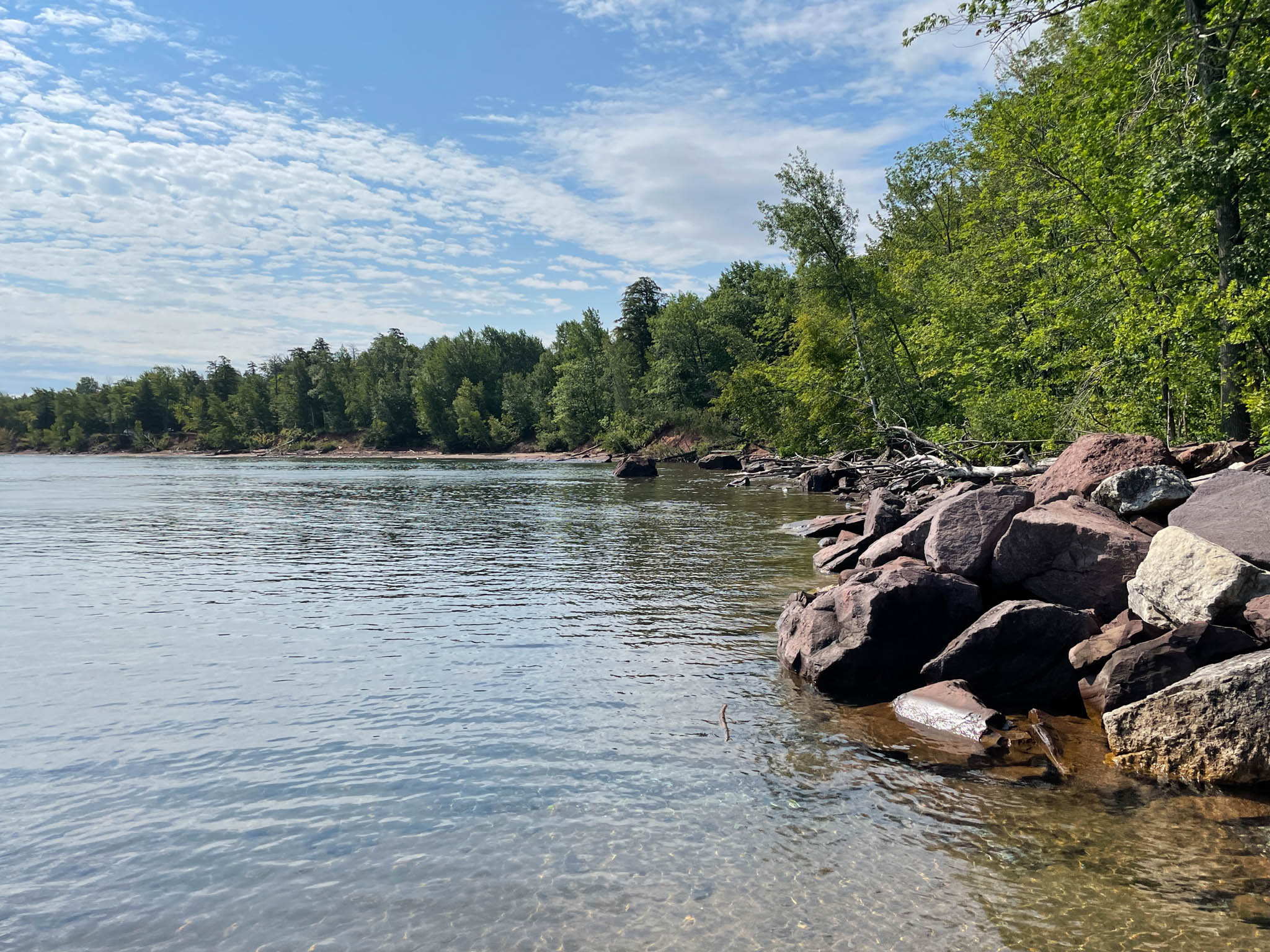 To round out the post, it’s really all about the lake and the views when I’m here. Sunrise looking east… 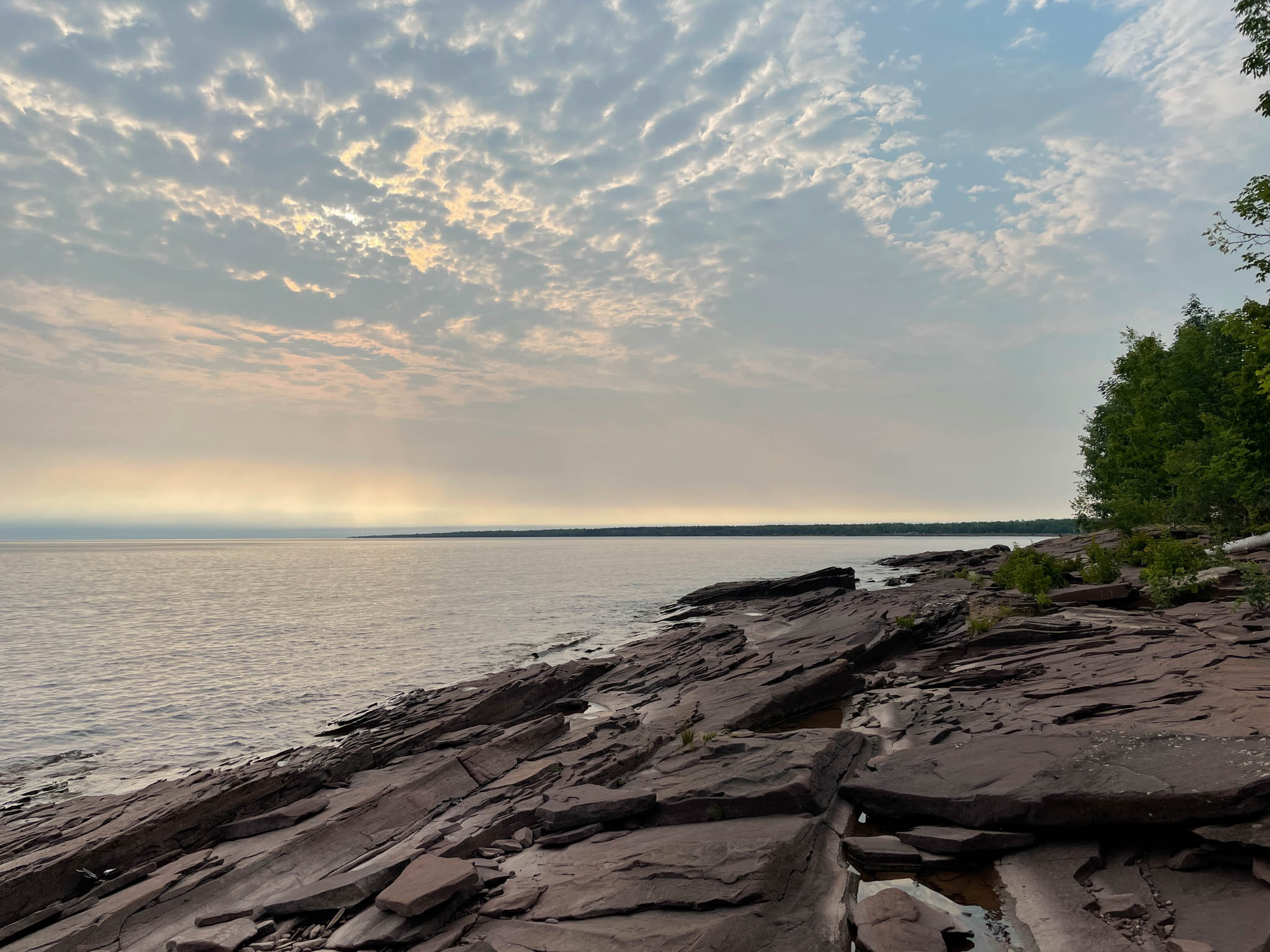 And then later the same day, sunset looking to the west. 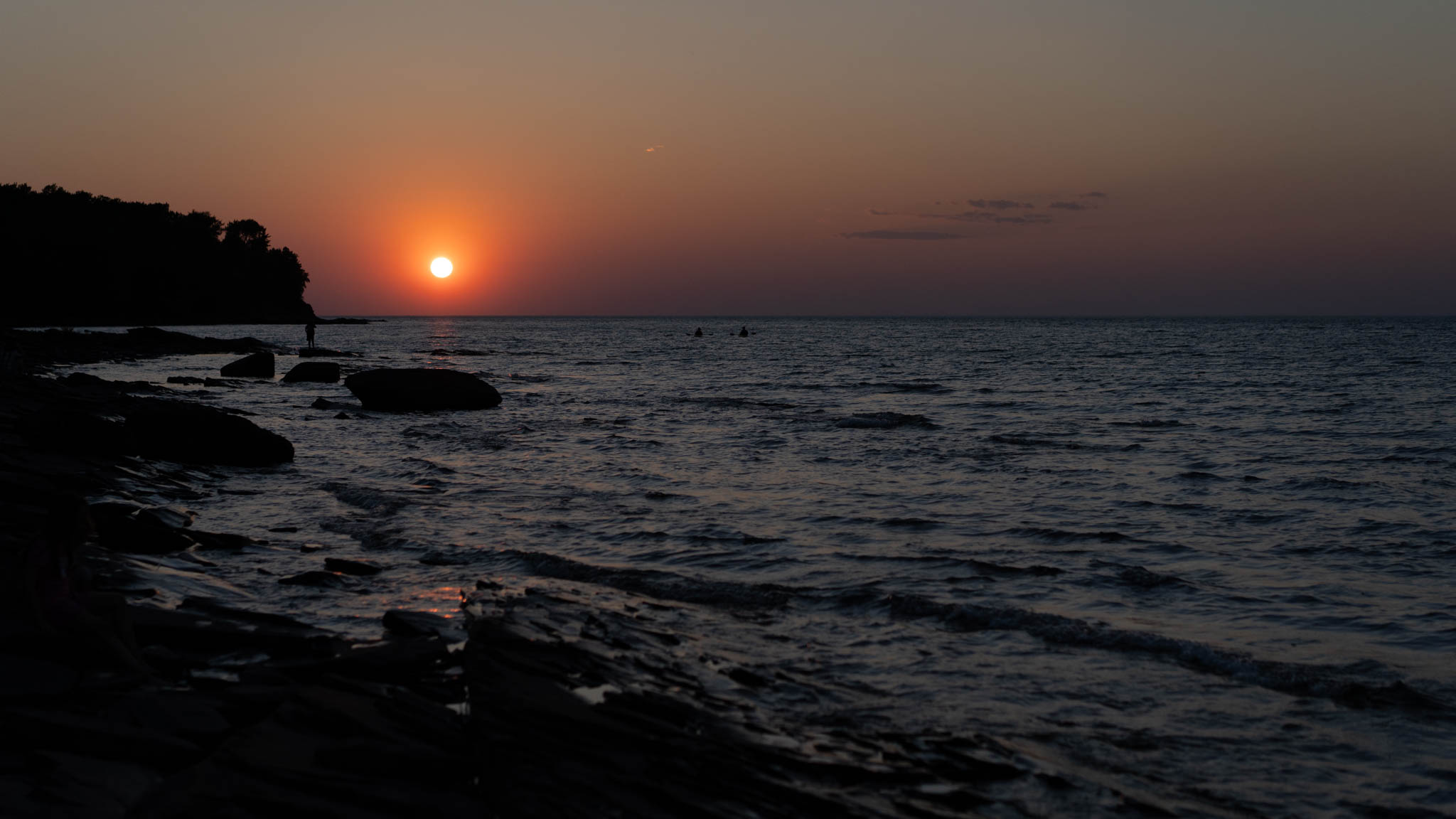 I really love this park. It’s remote, the cell signal is iffy at best, and people walked through my campsite all the time to get to the rocks. And I still had a great time. Because, at night, after the sun went down and the people walked back through my campsite to go home, I still had that beautiful sound of water and in the morning, I’d start my day by seeing the majesty that is Lake Superior.

Who among those people with a cultivated spirit, or whose heart has been wounded, can walk in a forest without the forest speaking to him?