Picking a campground in a place I haven’t been can be a lesson in serendipity. Sometimes, the campground is closer to a highway than I thought, with the accompanying traffic noise. As soon as I pulled into the Hurricane River lower campground and looked left to see Lake Superior, I knew this place was a winner. I backed into my site, quickly set up the basics, and then headed down to the shore. Oh, my… 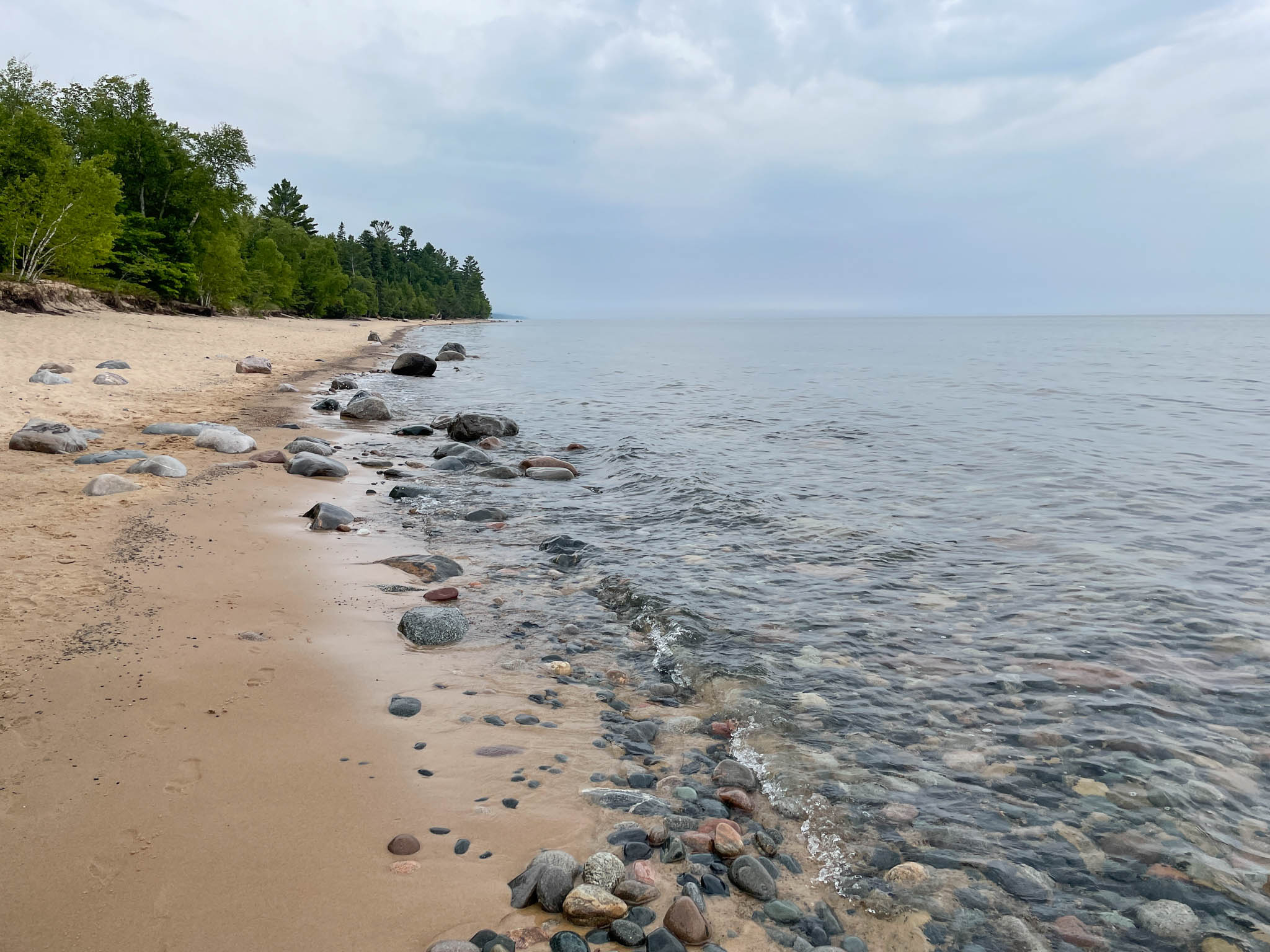 The small beach was just long enough to enjoy walking with my feet in the water, cooling off from the hot weather that descended on the UP in mid-July. I visited this beach at least twice a day during my time here and I was quite sad to let it go as I drove out of the campground five days later. 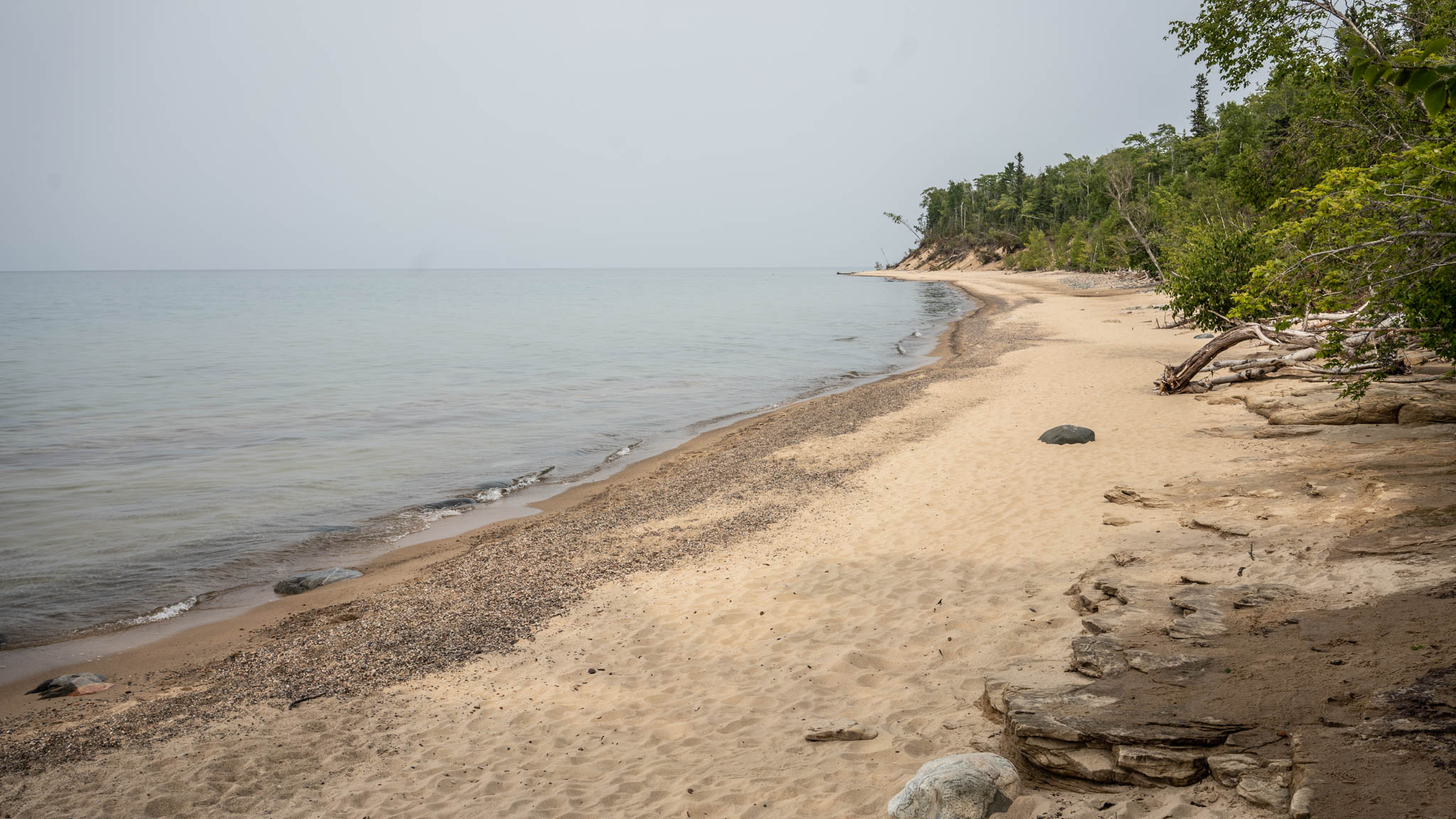 There were two things about Hurricane River that required changing up my routines. First, none of the sites at the campground have electric service, so I was living off my battery for four nights. None of the campsites were great for solar, so I was glad I had that big 100-hour lithium battery. By the time I left, the battery was at 35%, still a healthy number. With my old battery, I’d have been hauling out the generator by day 3. (For battery/solar nerds, I’m working on a separate post about my power usage with a lithium battery).

The second thing was harder to deal with: zero connectivity. No ATT, no Verizon, No T-Mobile. (Yes, I have all three services as phone, hotspot, and hotspot, respectively. As a full-timer, it’s how I stay mostly connected). So when I wanted internet, I drove 8 miles to the lake overview, where I could get enough of a Verizon signal to upload and download things. The view, though, made up for the inconvenience!

I was looking forward to seeing Grand Marais (Michigan, not the one in Minnesota). Honestly, the name oversold the actual town. There are a few tourist-oriented shops, a hardware store, a tiny mini-mart, and a few places to eat (includinge one lonely food truck).

The one redeeming feature of Grand Marais, at least to me, was the beach fronting Lake Superior. At Pictured Rocks National Lakeshore, taking rocks is forbidden. Here at Grand Marais, no such restrictions. The day after a big storm blew through, there were families searching avidly for agates, along with some serious rock hunters who knew way better than me what to look for. I had fun squatting down to look at piles of rocks and pick out a few small ones to keep. Pretty sure none of them were agates but they were all cool to me.

Back in town (all of a two block walk from the beach), I wandered down to the bayshore, drawn by the site of so many kayaks. I wandered among them, taking pictures and checking out the models and the gear. #kayaknerd 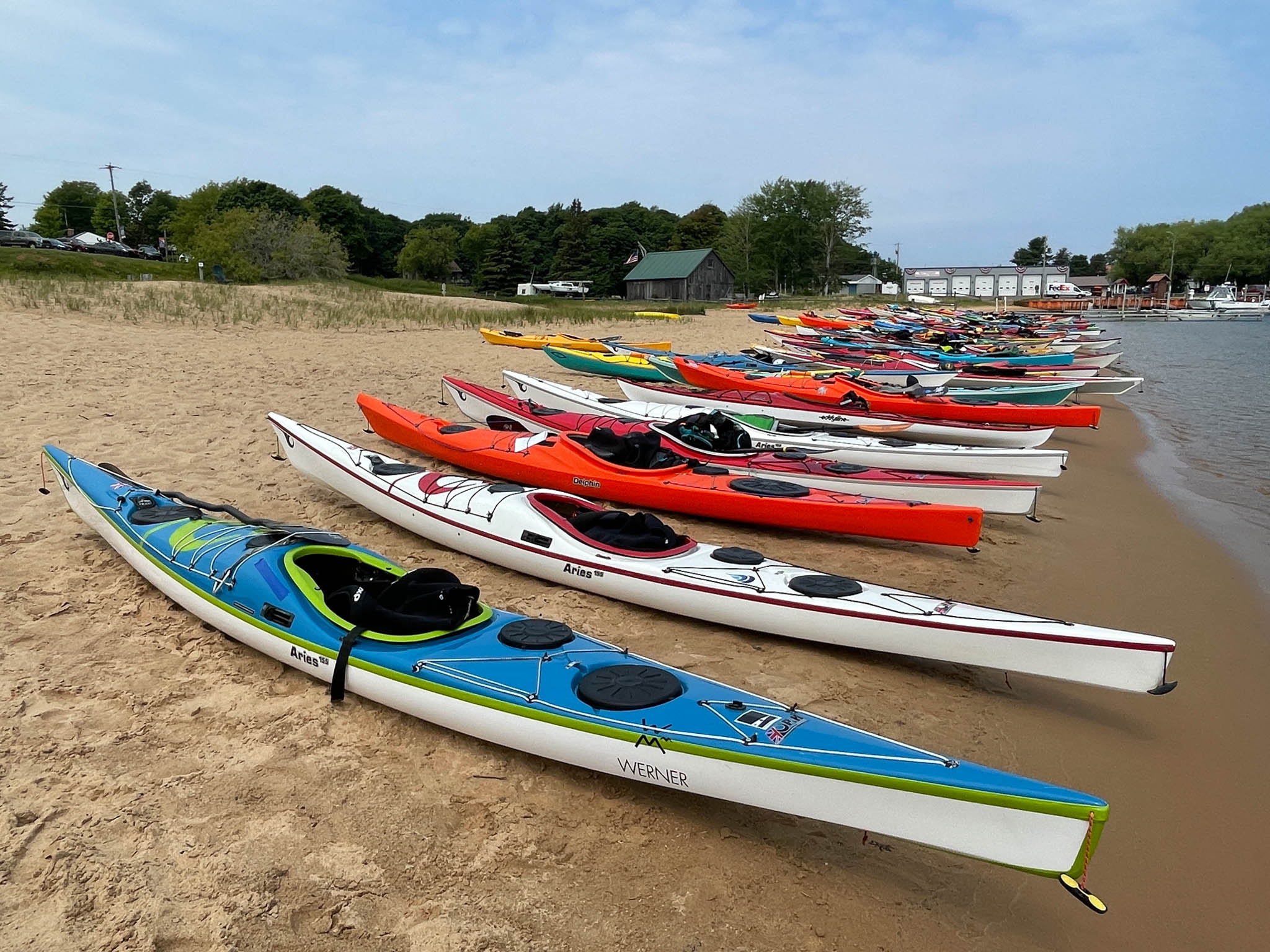 The most unusual building in town was the Pickle Barrel House. Seriously hilarious! It was built near Sable Lake in 1926 as a vacation home. As the nearby information says, “it was constructed as a typical barrel would have been, only on a larger scale.” The couple who owned it used it for 10 years before it was moved to Grand Marais and eventually made it to the National Register of Historic Places. I really don’t know what else to say about this except that the last thing I expected to see in the UP was a vacation house built like an oversized pickle barrel. 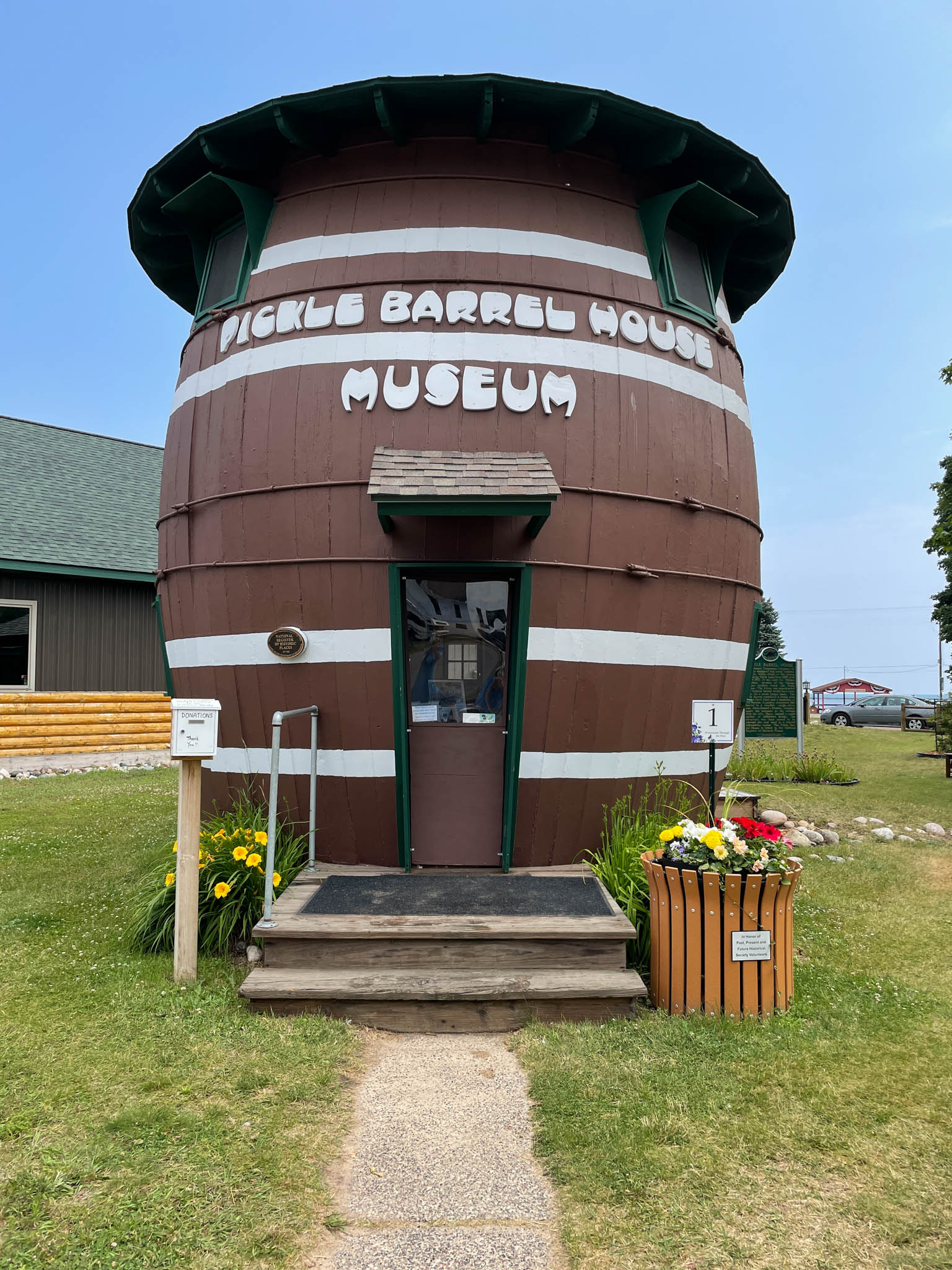 The second side trip was a walking one, using the trail from the campground to the Au Sable light house, a round trip of roughly three miles. The trail runs along the shoreline, but up the cliffs, so you get glimpses of the water and can hear the waves most of the time. I quite enjoyed the walk. 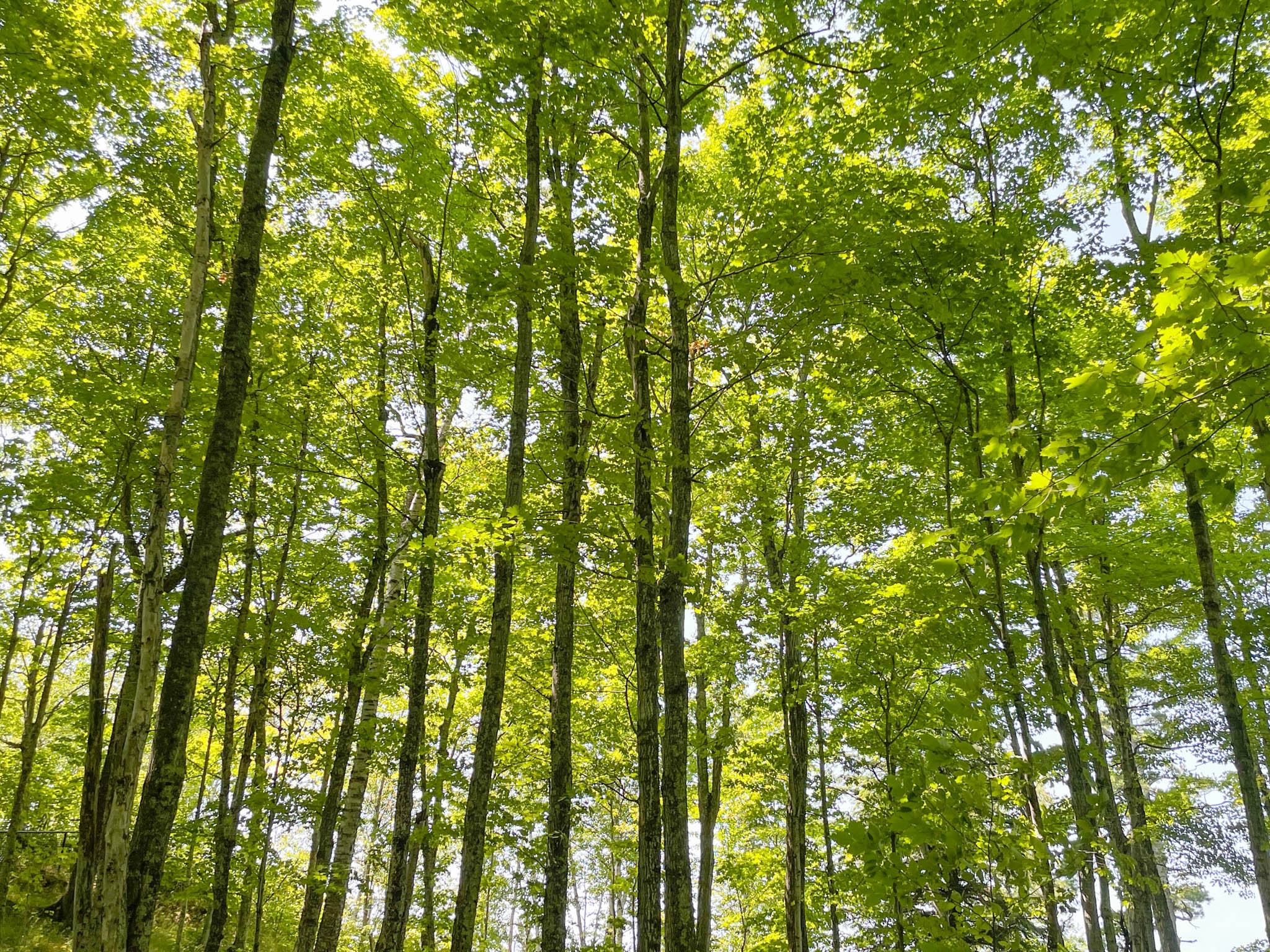 By the time I got to the light house, the day had heated up and there was precious little shade to be had. I snapped a few photos, walked around a bit, and then headed back to the cool shade of the forest trail home. 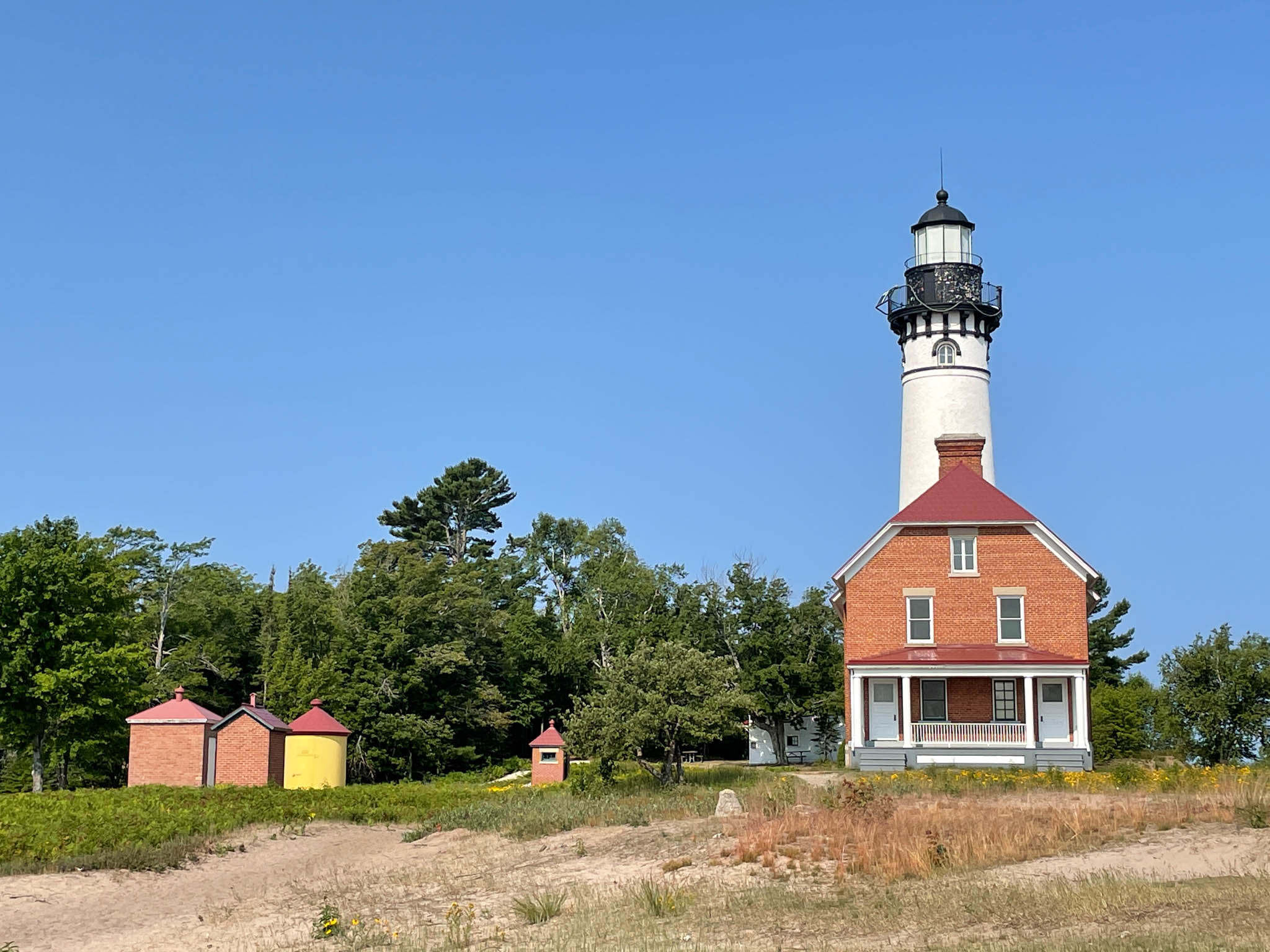 Standing on the edge of the light house property, you can see straight down into the lake and then out to the horizon. The water is so clear here that I found it hard to see the edge of the shoreline at the bottom of the image. The haze from the western fires was already starting to infiltrate the UP skies so the horizon is that smudgy line near the top of the image. 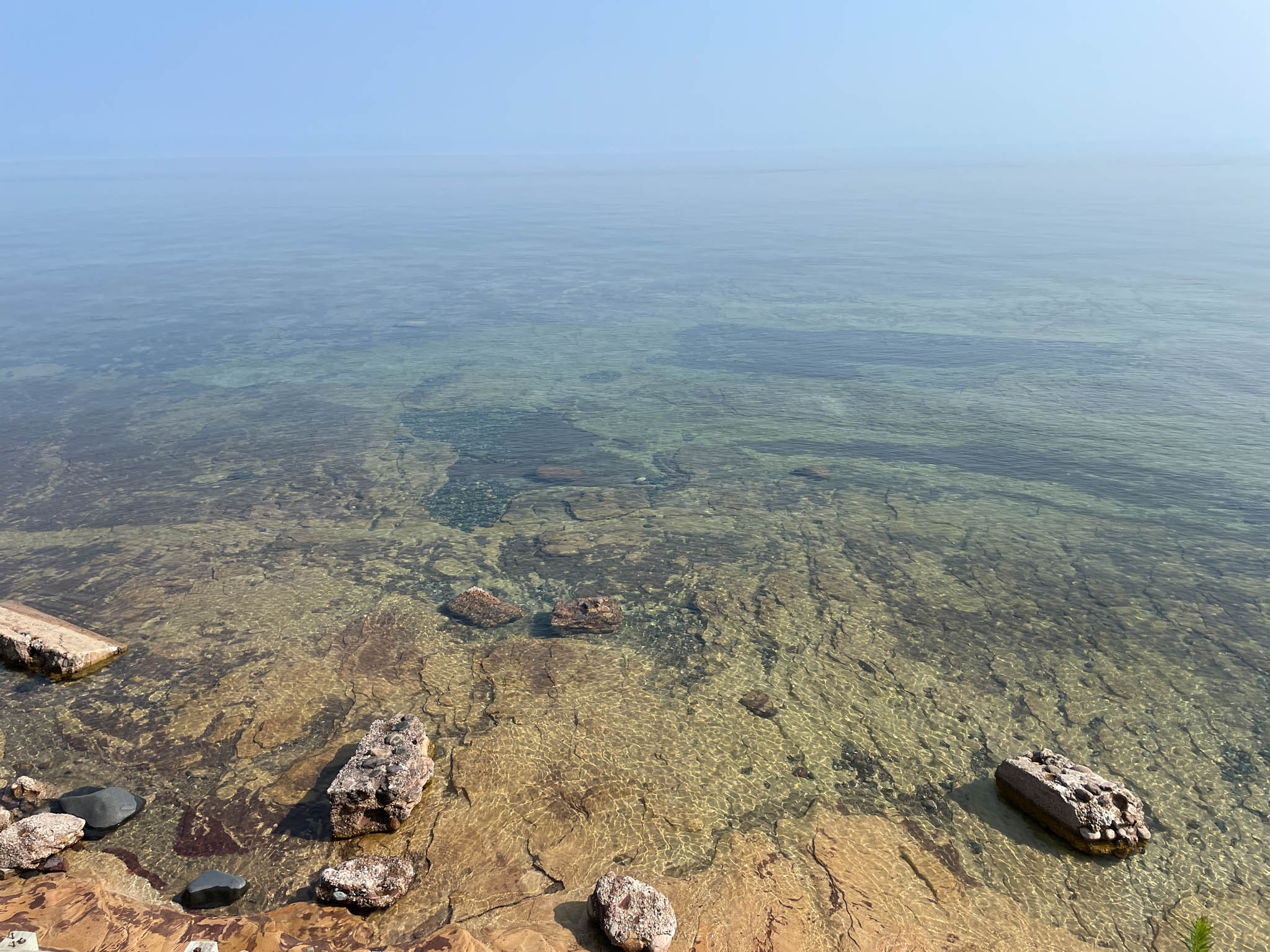 Rather than make this one massive post, I’m going to do a separate post about the Pictured Rocks boat cruise. So many photos, it’s work to figure out the best ones to showcase that adventure. And then there’s a bonus beach-related post after that, so it’s a trifecta of Pictured Rocks posts. (And for battery/power nerds, I’ll be doing a super-nerdy post later).

As you wait for those, enjoy this little frog I saw on the beach. I jumped back when I saw it. The frog held their ground, not at all freaked out by a giant thing looming over them taking this photo. 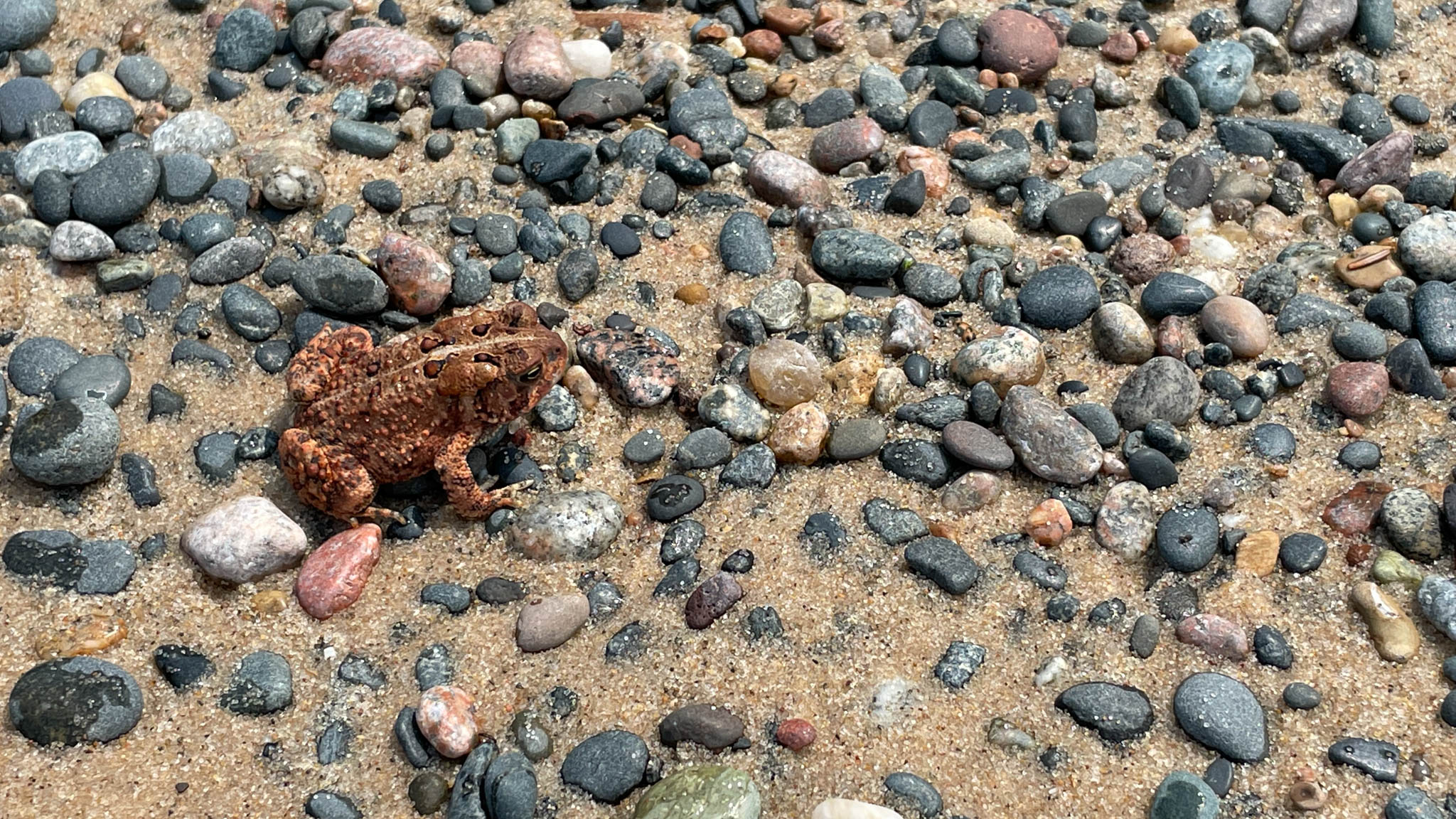 And here’s one last shot of the beach at Hurricane River, because I really like the image and didn’t have anywhere else to put it in this post. 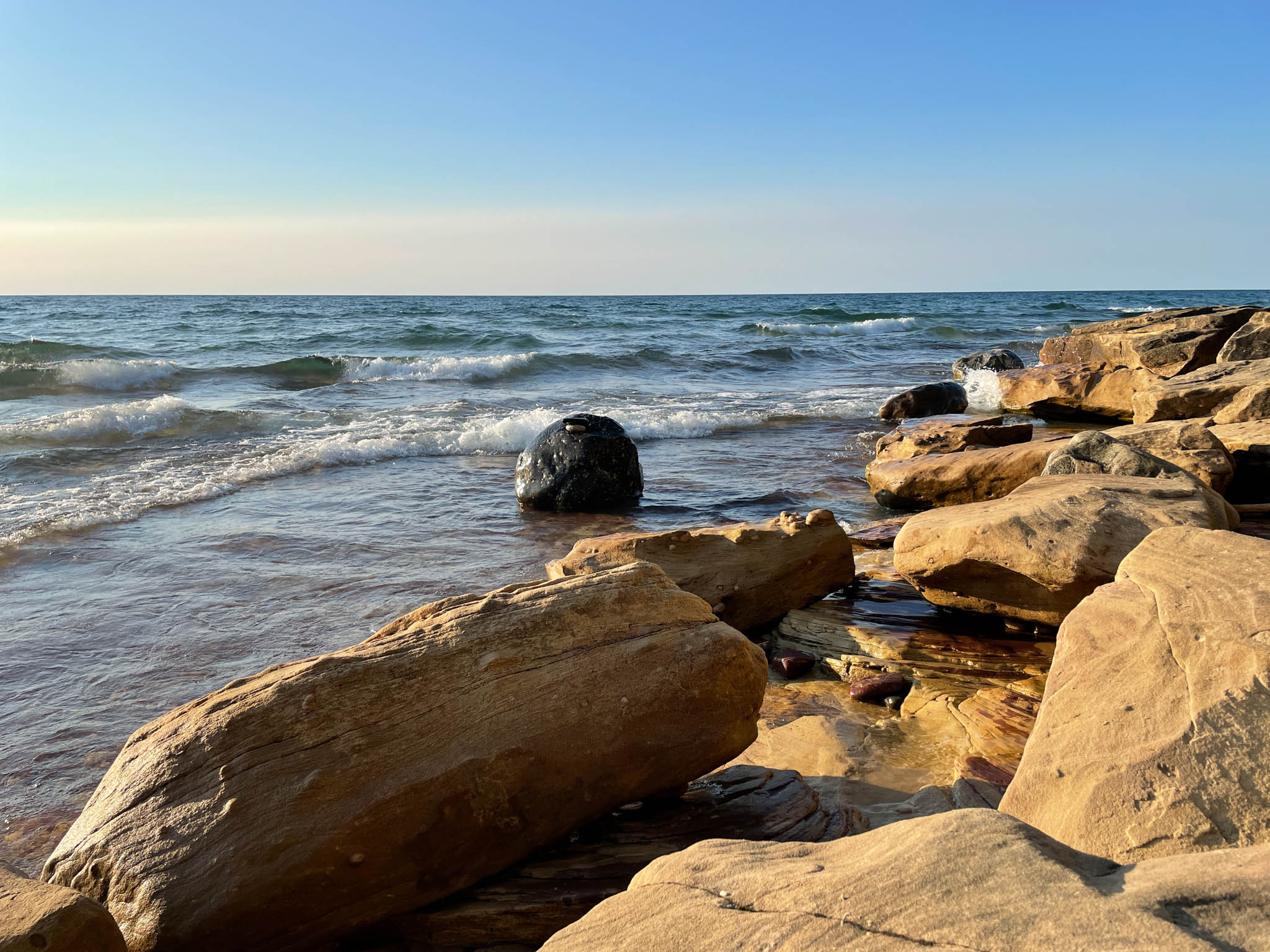 Exploring the world is one the best ways of exploring the mind, and walking travels both terrains.