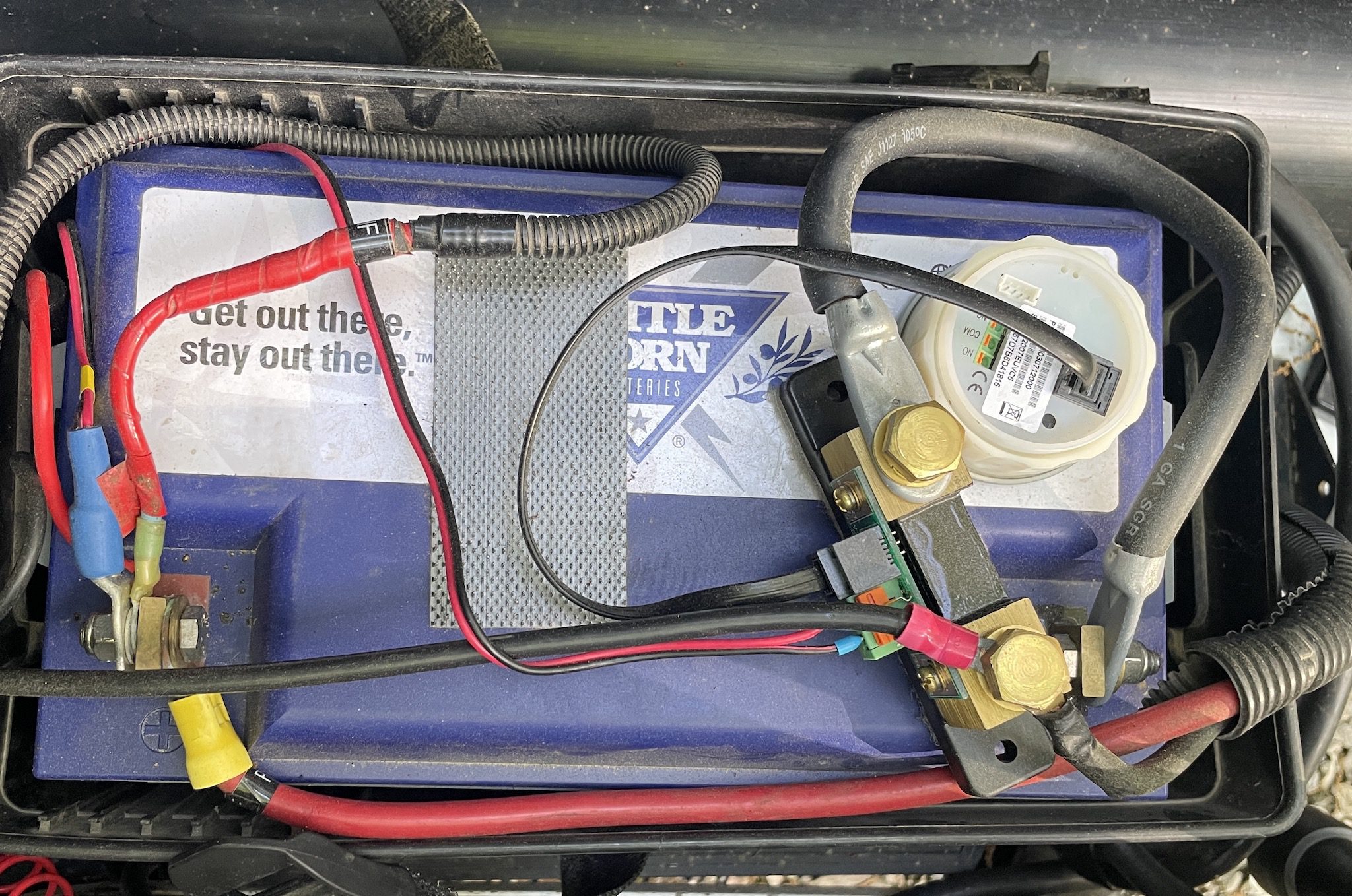 Warning: This is most likely a post that only battery nerds will love.

In the Alto groups on Facebook, there are long-running discussions about battery usage, especially when it comes to the 12v fridge vs. the propane/120v fridge. I spent four nights dry camping (no electric or water hookups) at Pictured Rocks National Lakeshore and tracked my battery usage using a Victron battery monitor. Let’s walk through the four days of no electric hookups, see what the solar panels contributed to the effort, and then see how the battery recharged when I got to a powered site. 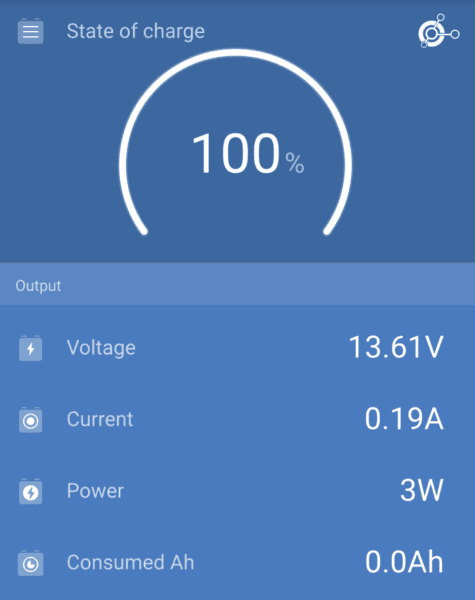 The biggest energy suck in my Alto is the 12v fridge. When running, it draws 3.2 amp hours off the battery. It doesn’t run 24/7, though, so let’s say it runs 15 minutes out of every hour. That means it uses about 19 amp hours per day (15 minutes/hour x 24 hours = 6 hours x 3.2 amp hours = 19.2 total amp hours per day). For Alto nerds, the fridge was set at 3 during the day and 1 overnight, which kept things cold enough. (Note: I rarely keep it cold enough use the freezer section.)

Beyond that, on most days, I charge a Macbook Air laptop, a tablet, and a phone. At night, I use the LED lighting system in the Alto without worrying about power. I didn’t run the Truma or the fan that much this stop because the weather was pretty decent as far as ambient temps went.

You can start to see how the fridge uses most of the battery power. 19 amp hours per day = 38 amp hours over two days, and the battery monitor shows 42 amp hours have been used. The other four amp hours were spent on charging the toys and running the lights and the water pump. 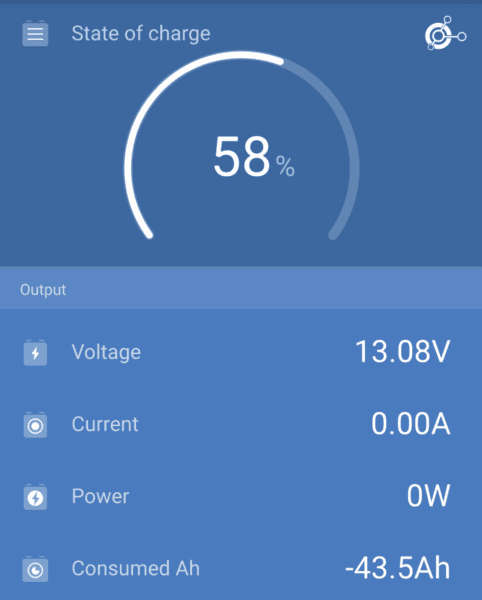 That third day was colder and so the fridge worked less to maintain temperature. Only 14 amp hours instead of 19, but I’m still below 50% after 3 days. 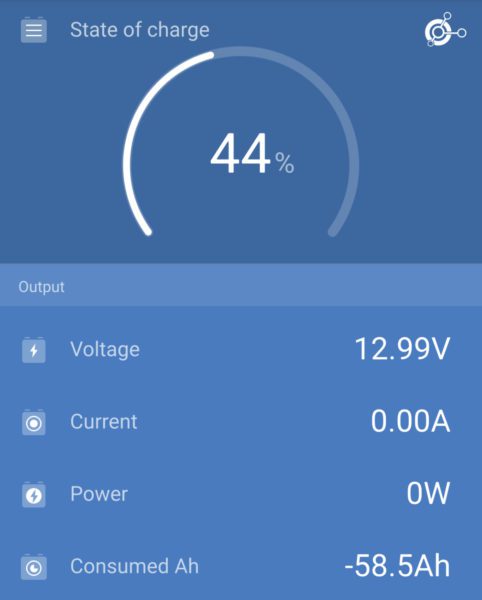 This is be the day where I’d be hooking up my propane-fueled generator if I still had a lead-acid battery. My old group 31 lead-acid battery with a capacity of 130 amp hours would have been at 49% after this three days, meaning I would be starting to damage the storage capacity.

I finally got some decent solar into the battery (yay!), which meant my energy usage was a net 8 amp hours. Since a lithium battery can go close to 0%, I still had enough battery to go another night or two if I was careful. My goal with the upgrade to a lithium battery was to get by without a generator as much as possible and this four-day stint dry camping with minimal solar showed I’m going in the right direction. 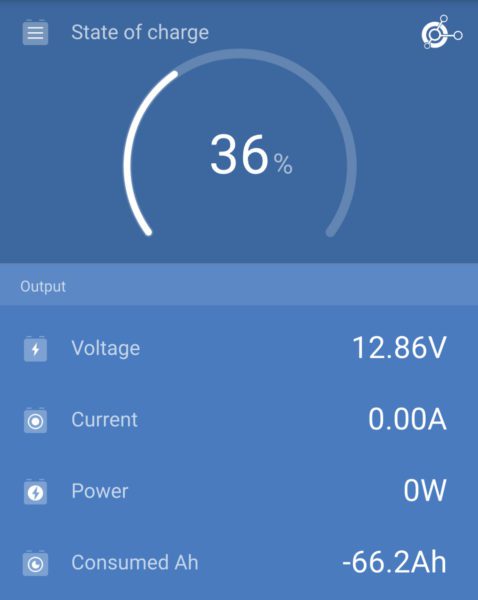 At the next site over, for the same four days, my friends were camping in their Alto, similar shade and solar systems on their trailer, same Battleborn battery and solar controller. At the end of four days, their battery was at 94%. The big difference? They have a propane/120 volt fridge. So while they used some propane, they didn’t use much battery at all, and their minimal solar input kept their battery close to 100%. (Thanks to Steven D. Palm for this data.)

Would I trade my 12v fridge for a propane/120v one? Maybe. It’s quieter, which is a factor for me since I hate humming noises. But a propane fridge does require a bit more management (side to side leveling when stopped and turning it off underway and at gas stations if you want to be totally safe, which I do). For now, with my big lithium battery, I’m OK with the 12v fridge.

There wasn’t much sun at this campsite, due to the foliage (silly trees) and overcast conditions the first few days. To convert watt hours to amp hours with my 12v system, 100 watt hours = 8 amp hours. So you can now see where I got the net usage on day 4. I probably used 15-18 amp hours but I also gained 8 amp hours, so the net was 8 amp hours down on the battery. 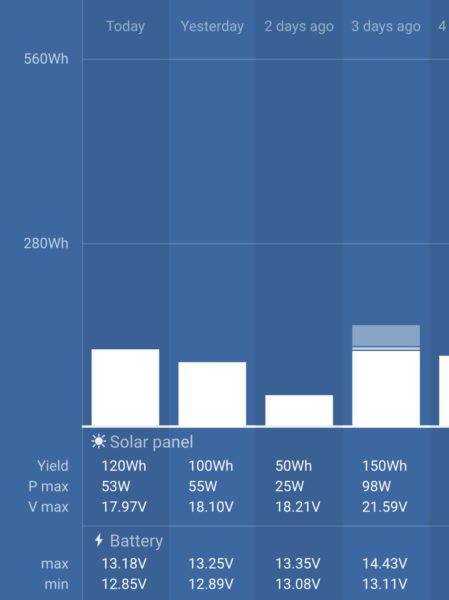 I drove about 2.5 hours with the combination of the 7-pin (tow vehicle to trailer) and some solar contributing energy to the recharge effort. When I got to the next campground and unplugged, this was the battery reading. Yep, 2.5 hours of driving in sunny weather AND plugged into the tow vehicle shoved a mere 19 amp hours into the battery, bringing the battery from 36% to 55% charged. (Ignore the current reading, as I had unplugged from the tow vehicle when I took this screen shot). 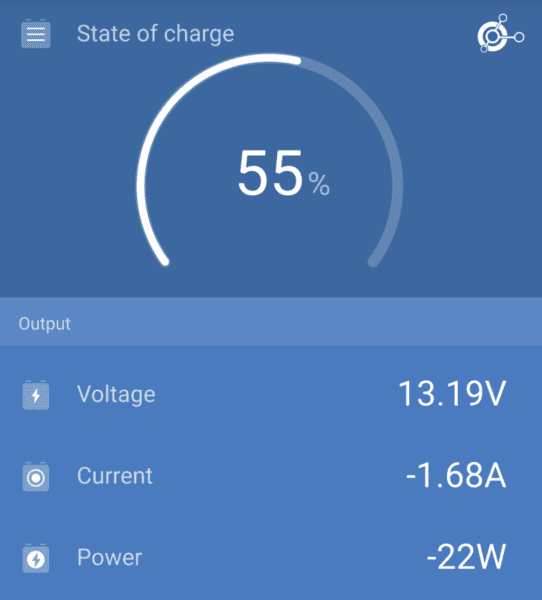 Then the recharging fun began. I plugged into the 30 amp power pole at my campsite. Whee! In 20 minutes, the battery gained 10 amp hours. 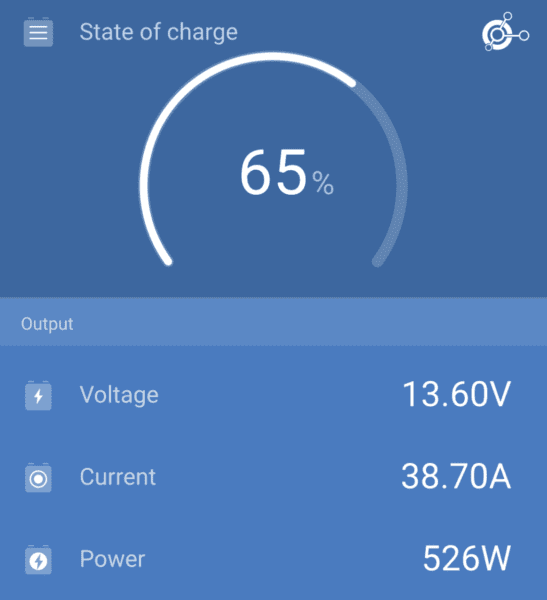 I got busy setting up the site and filling my water tank, etc. and so I didn’t take any readings until 40 minutes later. At 60 minutes total charging time, my battery had gained 59 amp hours and was almost fully charged. 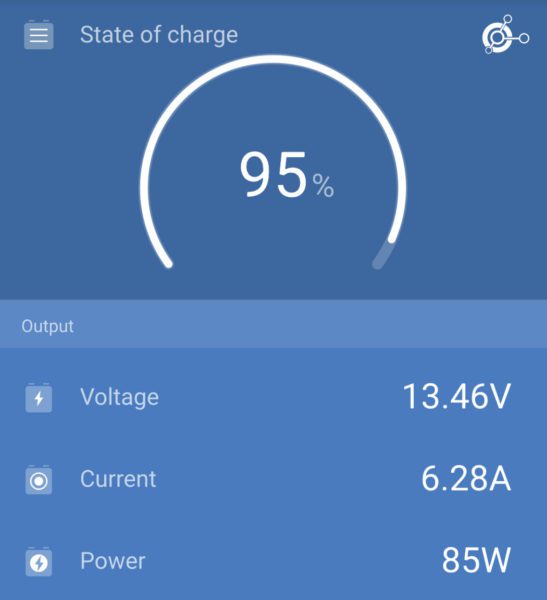 I use a pendant controller on my Progressive converter so that I can bulk charge the battery until 90% and then move it to trickle charge. This 38+ amps current is the bulk charging cycle; the currrent drops to 6 amps or so when trickle charging. That current drops bit by bit the closer the battery gets to 100%.

My Alto has the following energy-related equipment:

The 100 amp hour capacity of the battery makes it easy to calculate usage. If the battery shows 90%, then 10 amp hours have been used.

As a full-timer, I don’t have the option to bail and “go home” when my battery is struggling to find power, so a generator is my backup when solar doesn’t come through and I am not at an electric site. I have a tri-fuel conversion kit on my Yamaha 2000 and use propane as the fuel source (it can also use gasoline or natural gas, but since I carry two propane tanks, that fuel is easily available and I don’t have to deal with gas cans).

Related Post: My Alto Battery: The Power and the Gory