Along with the sightseeing is a constant need to pay attention to the little things about my Alto trailer. A loose screw, a funny noise, or, this week, the smell of propane. Never a good sign when you smell propane, but at least I smelled it outside the Alto, and not inside. I quickly ascertained that the leak was somewhere in the regulator bolted to the battery box. A quick Google search showed RV regulators can last 10 years or so, but that’s assuming you’re not a full-timer. In five years of constant use, it’s seen 42 states and more than 50,000 miles of towing, so maybe it was a bit overdue for retirement.

My friend Steve and I drove to Traverse City, 45 miles away from the campground, to search for the necessary parts. Sometimes things break when you’re camping a mile from a good parts store, sometimes you’re an hour or two away.

On our third store, we hit the jackpot. This RV sales and service place had it going on! I found an exact replacement (meaning no need to figure out a new mount for it) and the woman behind the counter worked with me to get a backup propane hose setup, just in case the hose was the problem. (I didn’t think it was, because I replaced that hose in April this year, but I do like to have a backup, just in case.) And also got a bottle of pink sudsy stuff that my Alto friend Jim recommended as the easiest way to find propane leaks. 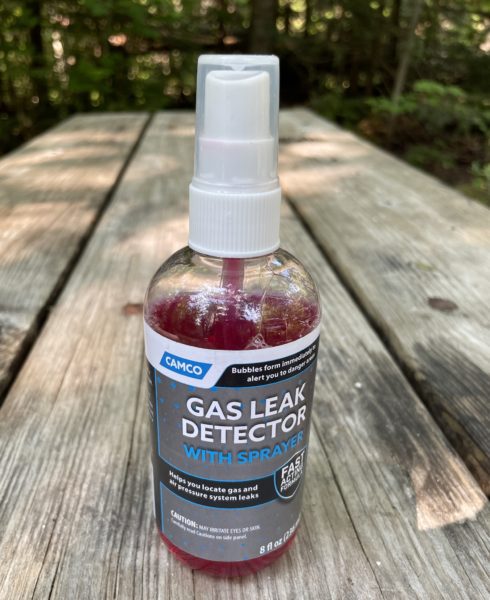 Now, back to the Alto to get the repair done. The screws bolting the regulator onto the battery box are in the *inside* of the battery box, so we had to undo all the connections on the positive and negative battery posts. Ugh, I hate doing that. (Mostly I hate dealing with batteries because I have visions of electrified me with hair sticking straight out.)

Then it was fairly easy to unscrew the old regulator and mount the new one. (Pro tip: screw the right angle connector on the back side in before you bolt the regulator on, it’s easier.) Back in went the battery and then we loaded up the connections. I tightened down the positive bolt and then promptly dropped the wrench head down the side of the battery into the bottom of the box. Too small to get a hand down there. This is why I have chopsticks in my trailer. That was, it turns out, the perfect way to hook the little wrench head and bring it back up to the surface. Steve was laughing at my clumsiness until he did exactly the same thing on the negative bolt. Chopstick to the rescue again.

With the regulator screwed into place, it was time to tape threads and screw things together (which also involved temporarily removing the dump tank hose container you see on the right side below). (Another pro tip: you may need to slightly push the regulator down or back to get the copper tubing to sync with the right-angle connector and thread into it.) I then turned on the propane and tested the connections with the pink spray, and no visible leaks at this point. Then again, I didn’t quite know what I was looking for, to be honest. 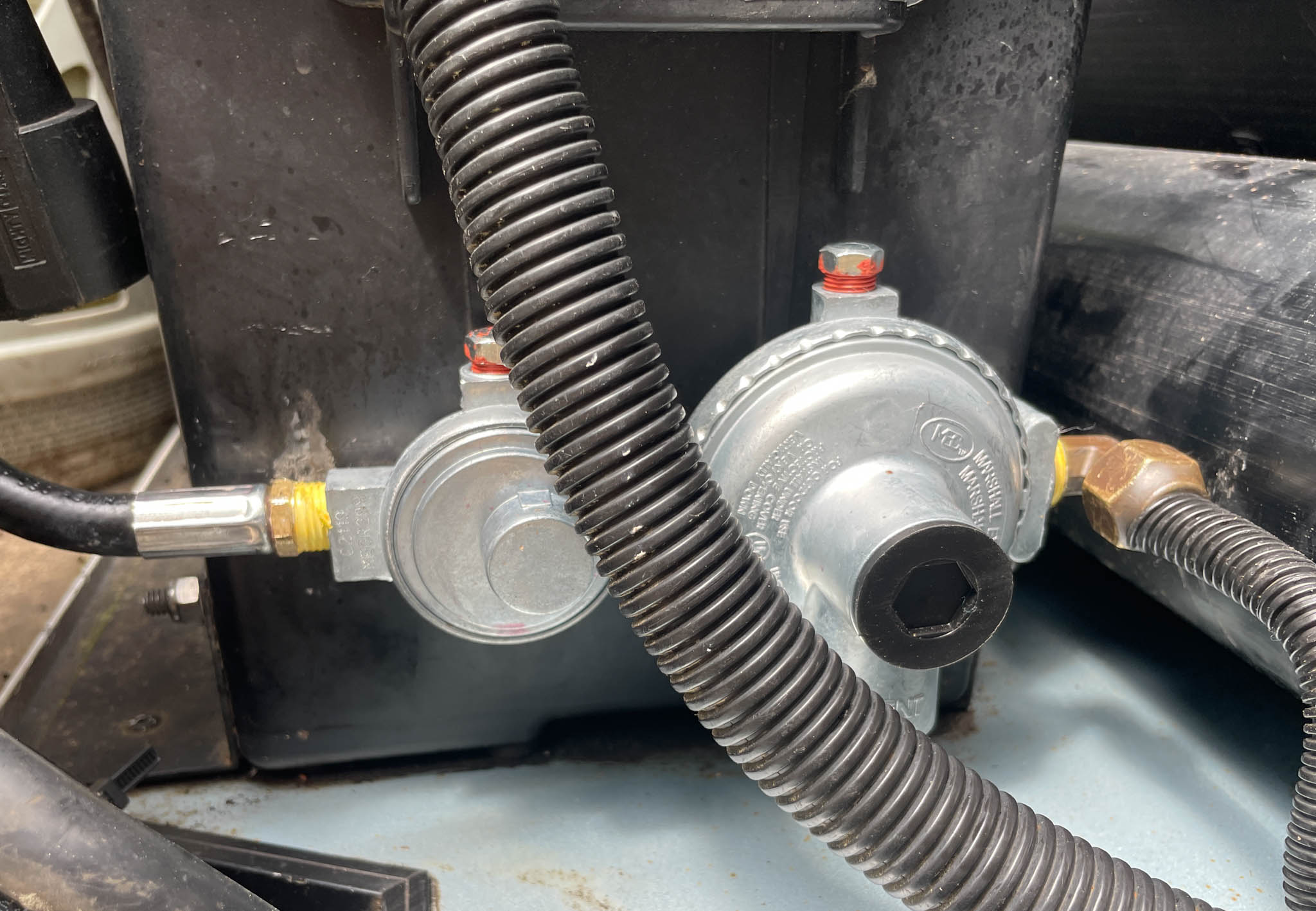 I did get a slight whiff of propane a few days later, and a liberal application of the pink stuff followed by very close inspection of each connection point showed a small leak at the junction of the regulator and the right angle fitting (right side above). The pink stuff was indeed bubbling there but it was hard to distinguish between the bubbles from spraying it and the bubbles from the leak, at least to my old eyes.

I removed the hose container again, then used a set of small needlenose vise grips to tighten that right-angle thingie as much as I could. Reattached the copper line (which is inside that black plastic tubing on the right and retested with the pink stuff. No leak. No smell, All done, finally. And now I know how to replace a propane regulator.

(Thanks to Jim Gauvreau and Steve Palm for their help in this little project.)