You know that saying, “It’s the journey, not the destination?” Well, this post is all about that because getting to Reed Bingham was definitely about the journey. I took all back roads because my brief foray with just the Ridgeline onto I-75 was enough to convince me I didn’t want to tow on that interstate: four southbound lanes of fast 18-wheelers, cars, and trucks and a lane repaving project that meant changing lanes involved a bit of a height change as well. And when I say fast, I mean I was going 70 mph and getting passed by almost everyone. So going 55 while towing on that interstate was definitely a non-starter.

Besides, the back roads are way more interesting. Check out this T-intersection. I have yet to figure out what a Primitive Baptist Church is, but I see signs for them a lot on back roads. And if look carefully at the blue billboard in the background (wow, that’s a lot of B words lined up there…), you can see it’s for Perdue, one of the people now in a run-off U.S. Senate election in Georgia. 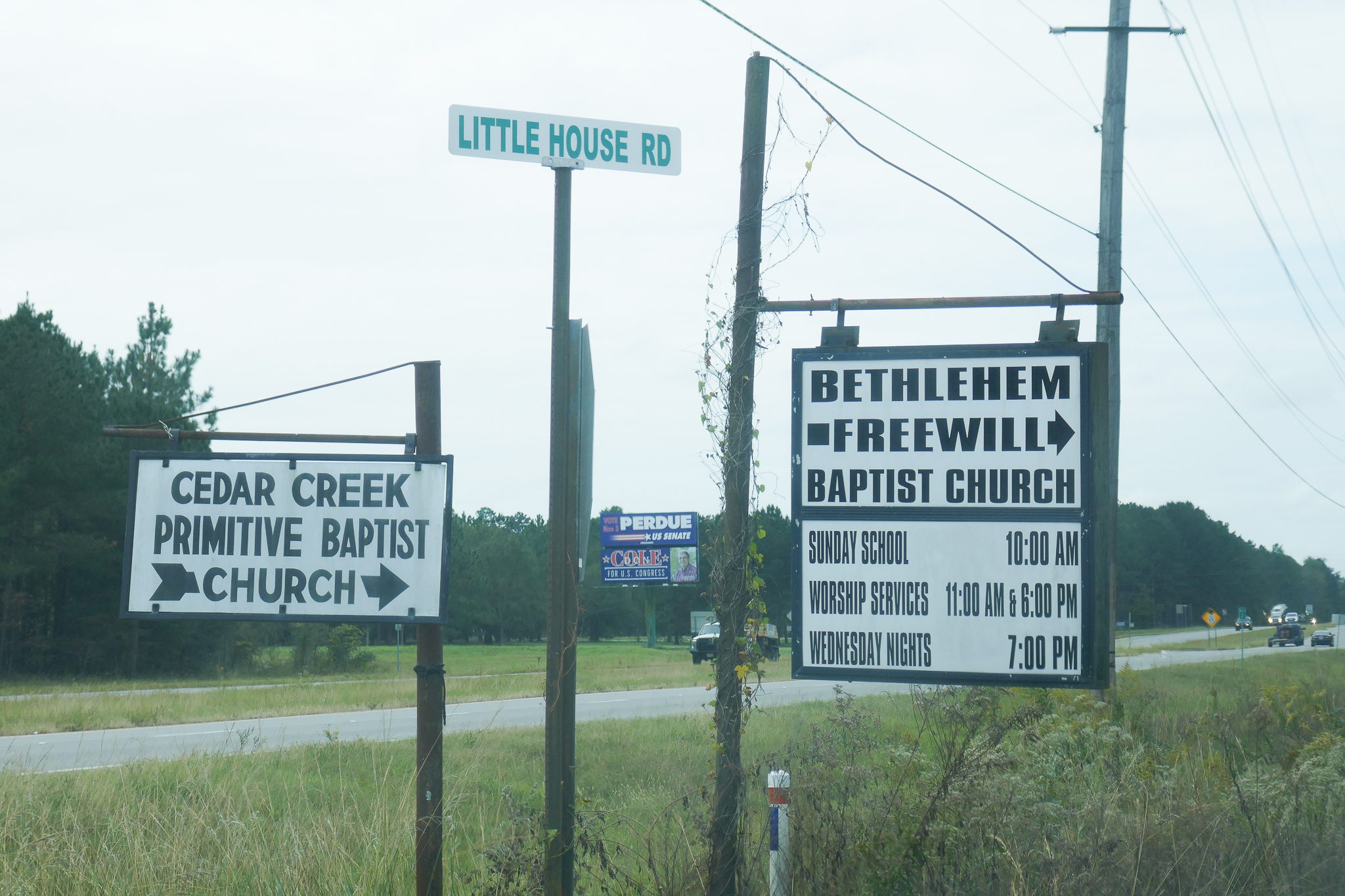 A while later, I pulled over at a Walmart to do my grocery shopping and parked behind this trailer with a very bored cow inside. She did not even give my rig a second glance. First time I’ve ever parked next to a cow, though, so that was kinda fun. 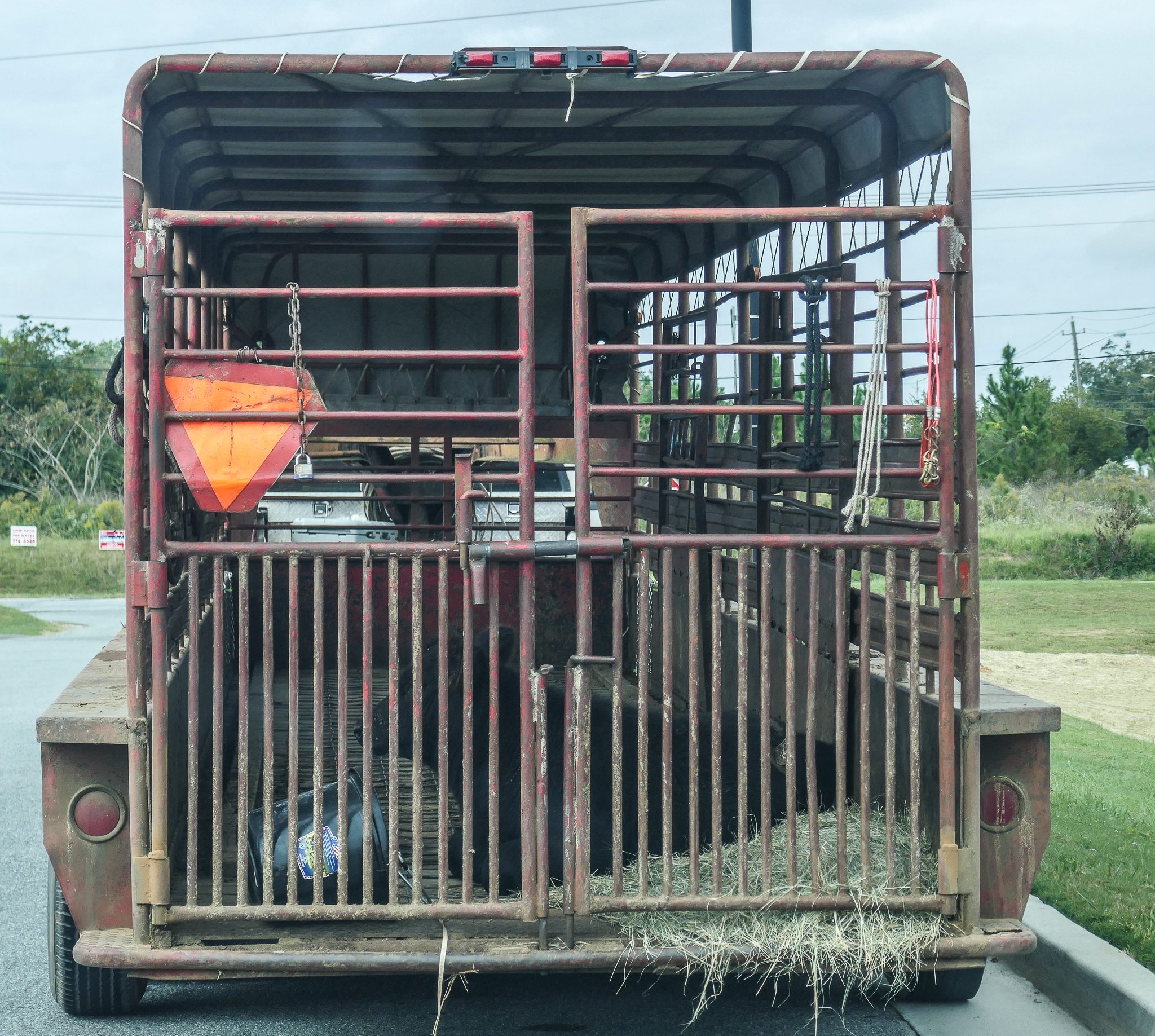 Then it was time for the wrong turn and the hapless Garmin episode of the day. I missed the turn but Garmin assured me that the road 2 miles on would get me to the other side of the campground where I was headed. No obvious places to turn around so I just kept going. The turn looked good, paved with a stripe down the middle, which usually indicates it’s a “good enough” road for me. But, I was wrong. About a half mile in, the road became the red dirt that made the South famous in songs like Emmylou Harris’ Red Dirt Girl.” It wasn’t too badly rutted, and again, nowhere to easily turn around, so I kept going, albeit at 10 mph to avoid leaving a huge dust trail behind me. 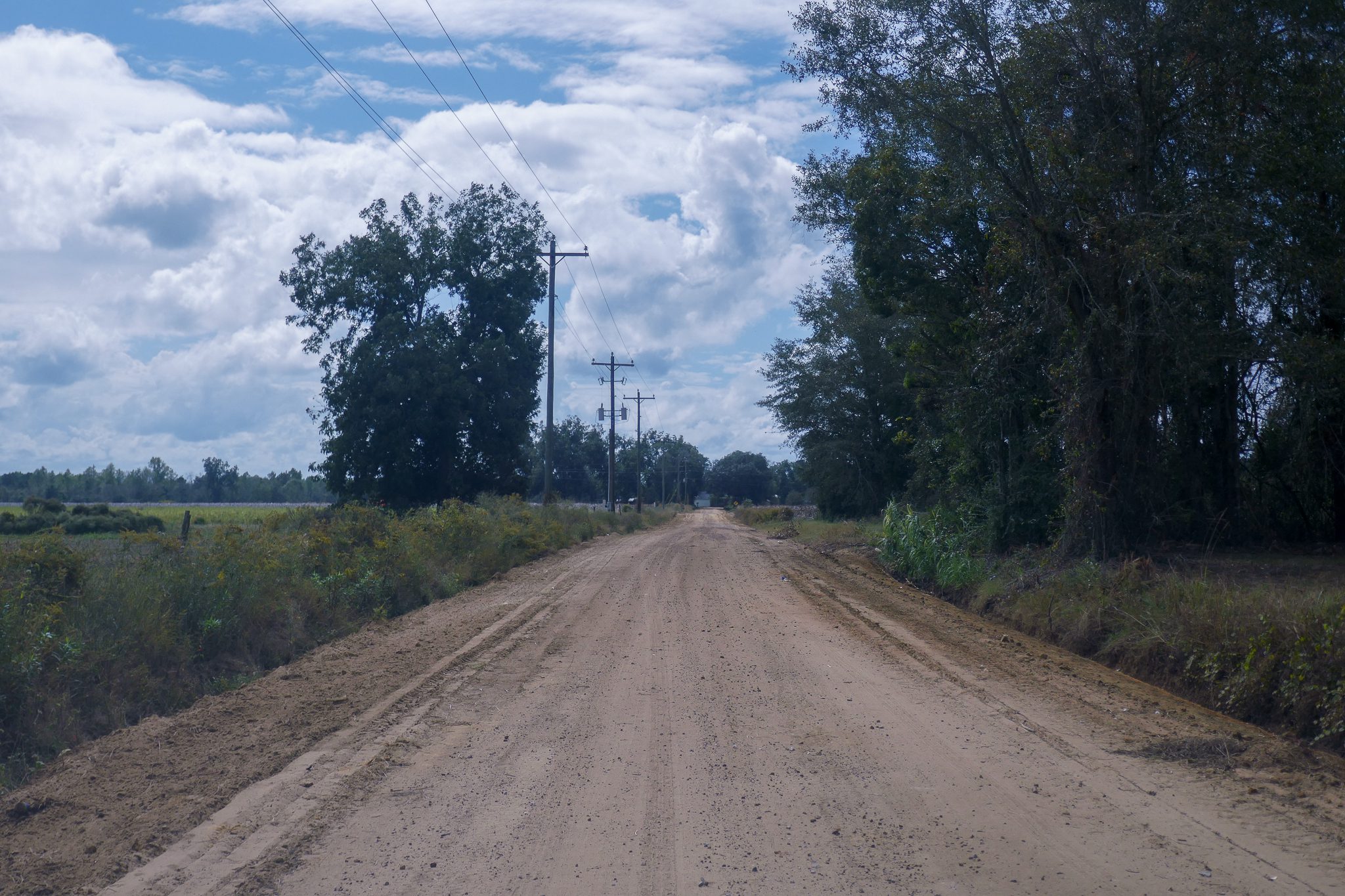 I passed several farms, some with workers who just looked at me and probably mentally shrugged at that woman driving a camper down a dirt road, but whatever. I did find out what kind of farms because it was rather obvious by the bales of cotton in the fields. The last farm on the road had pink-wrapped bales so I stopped to take a picture because I can tell you it’s not every day you’re going to see pink bales of cotton. Between this and the cow at Walmart, it was an exciting day to be a vagabond. At least in 2020. 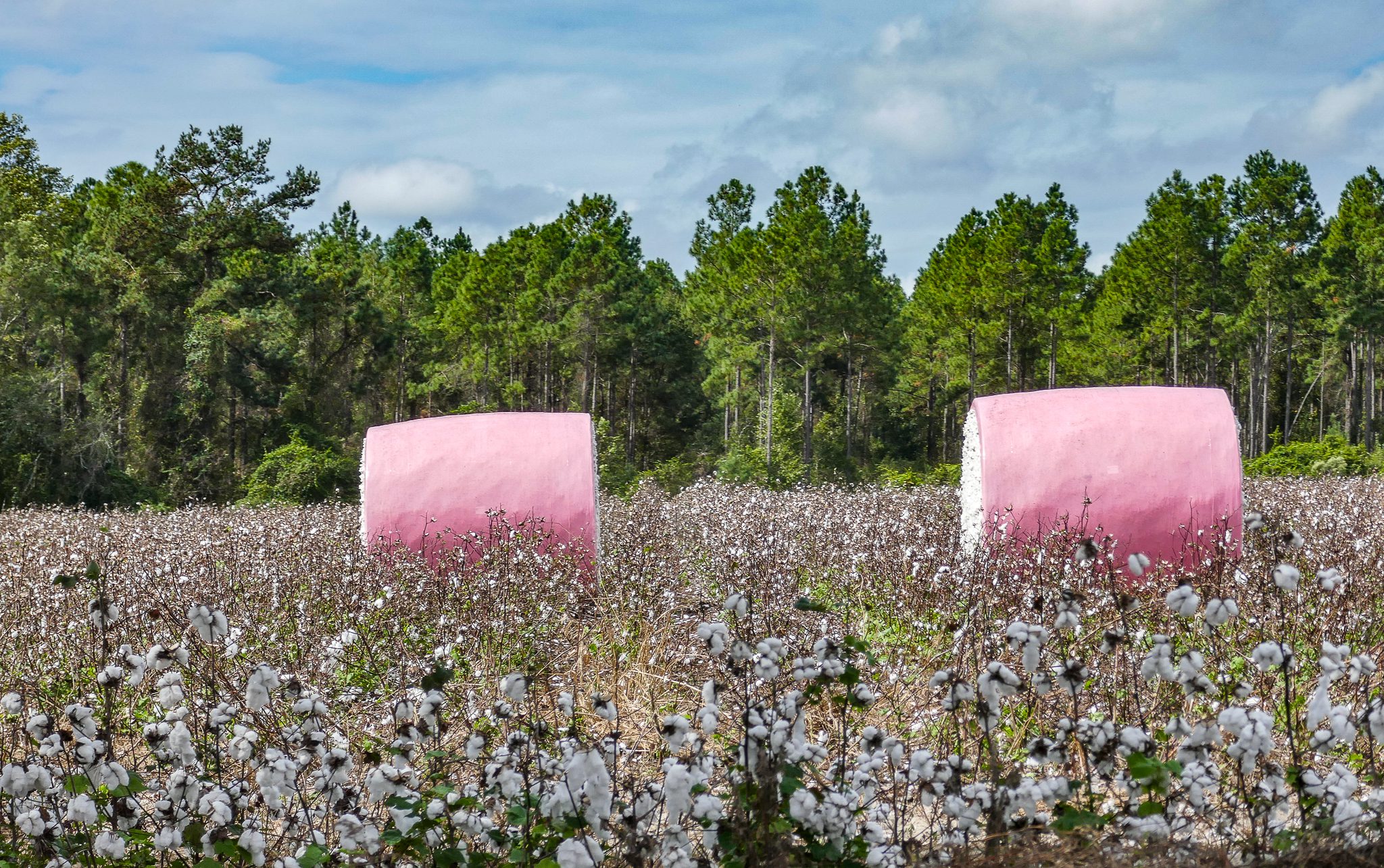 The state park and campground were nothing special, to be honest, just a two-night stay on my way back down to Florida that fit into the plan well enough. My pull-through site was generously sized and I did enjoy the full hookups, to the point where I did some serious tank rinsing the second day. Always good to get the tanks full of clean water and some Dawn detergent then drain them out again, all while staying on site and not having to deal with driving to the dump station. It’s the little things that make my day, and full hookups are definitely in that category. 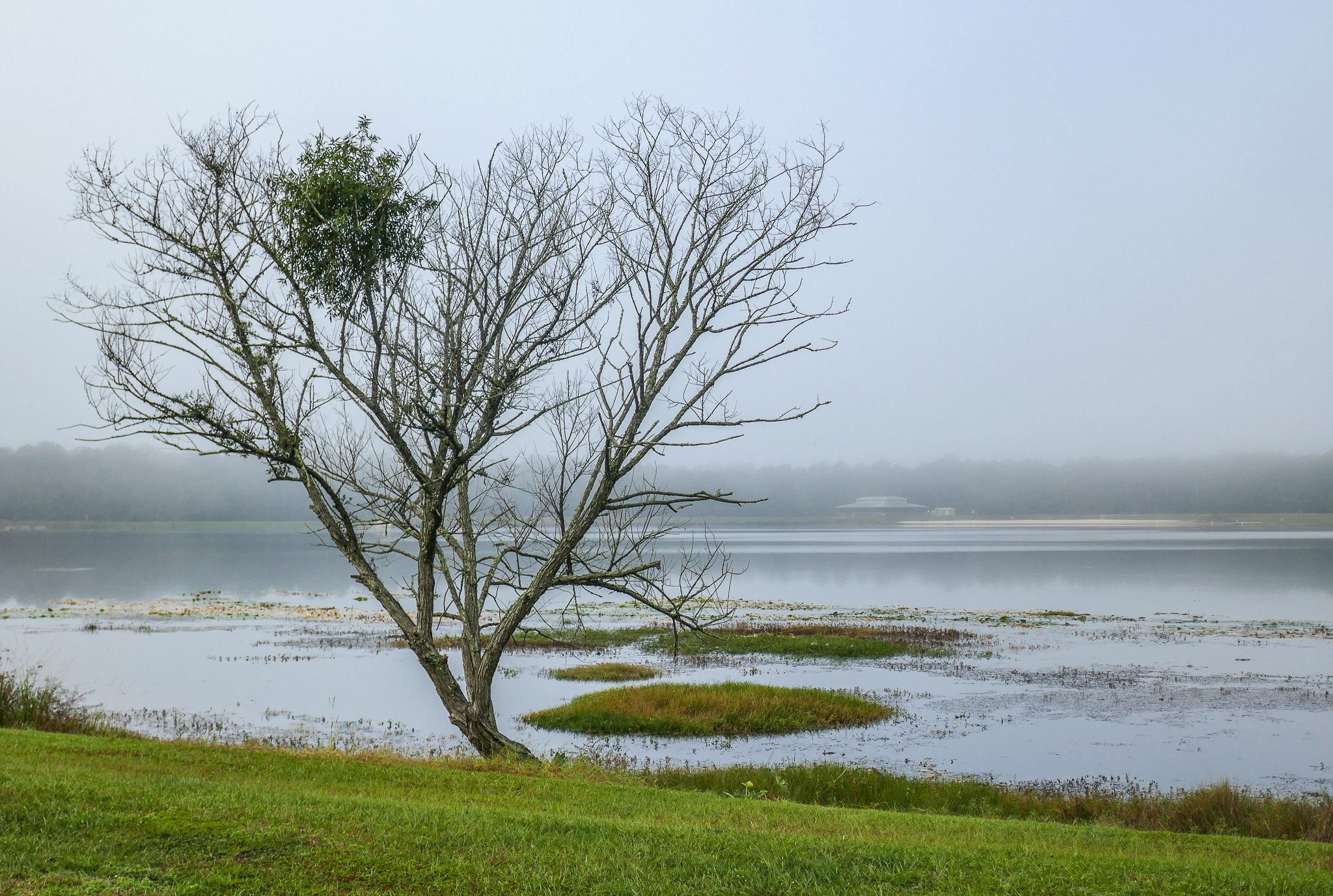 There’s a nice lake and boat launch and I enjoyed walking around there and also on some of the trails. There is actually an extensive trail system for hikers, but with only two nights, I didn’t have time to explore it that much. 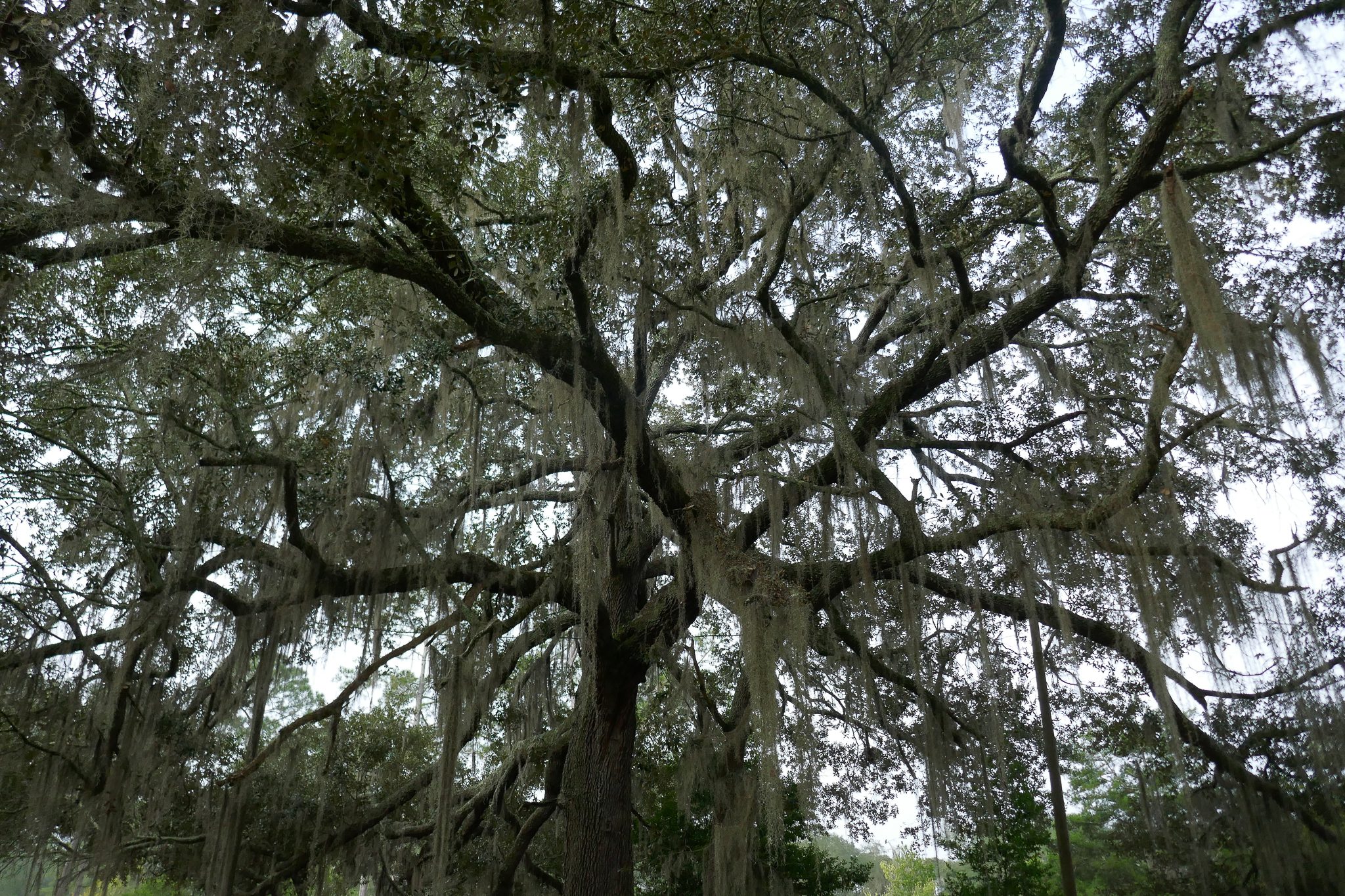 The thing that made me smile at this place was the live oaks dripping with Spanish moss. It’s such a common sight in Gainesville that seeing them here felt like a definite signal I was going home, or at least to my legal domicile. Live oaks are moving up in my hierarchy of favorite trees, not yet beating out the redwoods or sequoias, but they are getting up there.

I included this photo only because it is the exact opposite of the weekend campground experience. It’s quiet and calm in the photo, while the campground was sold out, packed with kids on bikes and party-loving, football-watching family groups. Me, I was dumping tanks and wearing airpods 🙂