I’m a little behind on my posts these days, so I’m going to whip through three weeks of challenges in one post. Let’s get started!

The point of this challenge was to take that word NEW and do something with it. New technique, new lens, new baby, new house, whatever was new to you. As I was surrounded by old trees in an old campground, this definitely wasn’t a slam-dunk challenge for me. I decided that I would take two of my favorite views on my hikes and learn new post-processing techniques. 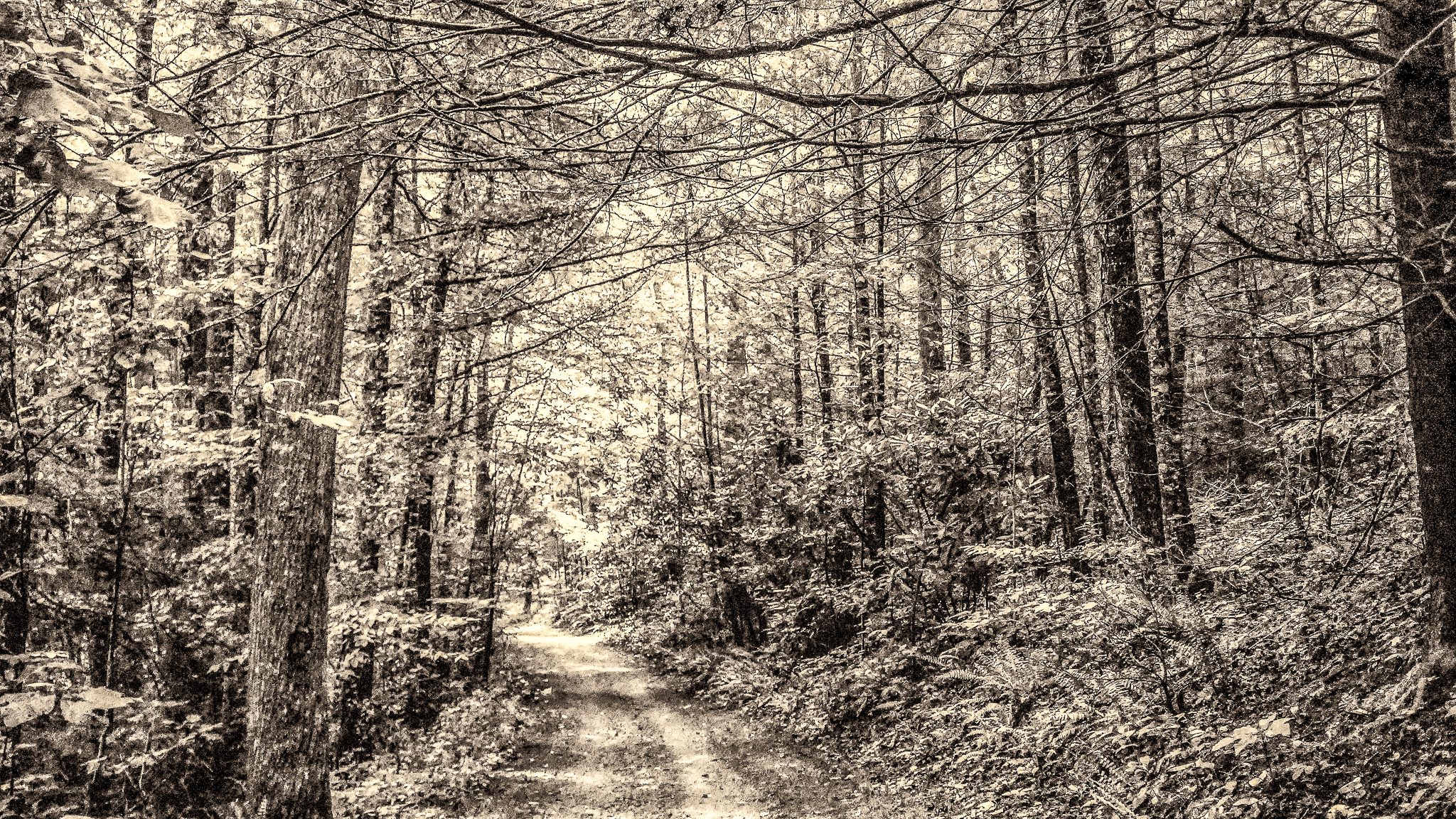 I like sepia tones, but I’d never played around with the idea much at all. In this image, I was going for the image as it might have looked a hundred years ago, with old cameras and no color film. In post-processing, I used a sepia filter, then softened the sharpness a bit and decreased the black to get this image. Using new techniques to get an old-fashioned look 🙂

The second image was looking up at a pine tree along the road. I’ll admit it, I was entranced by its branches, to the point where another walker looked up at what I was staring at and then asked me if there was a bird or something up there. When I answered “no, just a cool tree,” she shrugged and kept walking. I wanted to say, “Wait, wait, just look at those branches, those bones!” but if you’re not a tree person, perhaps you’d never understand. 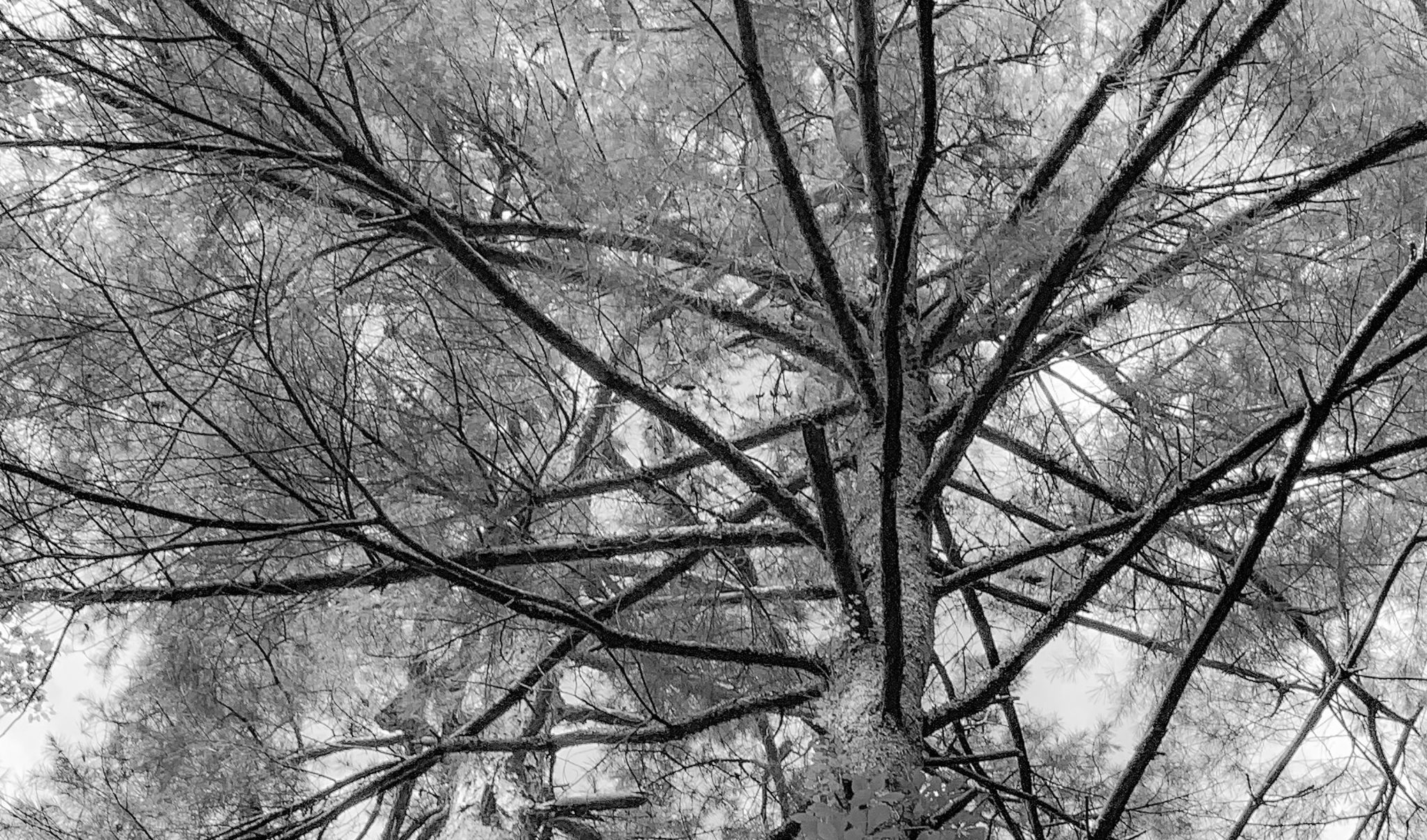 For this image, I started the post-processing with an infrared filter but decided that was a bit too weird-looking. I flipped the settings to B&W and then played with clarity and highlights and shadows until the bones stood out. Then I moved the image into Silver Efex Pro to fine-tune the B&W and also play with settings there that I hadn’t used before.

My favorite setting was selecting a type of old school film as a filter, like Kodak 100 TMAX Pro or Kodak Tri-X 400 (both 100 and 400 refer to ISO values). I actually used both of those back in the days when you shot a roll of 24 images, sent it off to the lab, and then waited a few weeks to see what you’d shot. I still marvel at the speed of digital photography and how well it answers the age-old question “did I get that shot or not?”

A few years ago, I did a first shot at astrophotography, being in the middle of the desert with clear skies and no moon. Fast forward to 2020, and like most things in this year, this challenge didn’t go to plan. Rain and rainclouds dominated the evening skies every single night. I had no idea how I was going to pull off a night-themed shot.

By Thursday, I was feeling a little cabin fever at being indoors so much to avoid getting soaked and also a little desperate for an idea. I started playing with a string of LED lights against a dark background (my quilt in progress) and my 80mm macro lens. The results were pretty disappointing until I went out of focus and got some cool bokeh shots. 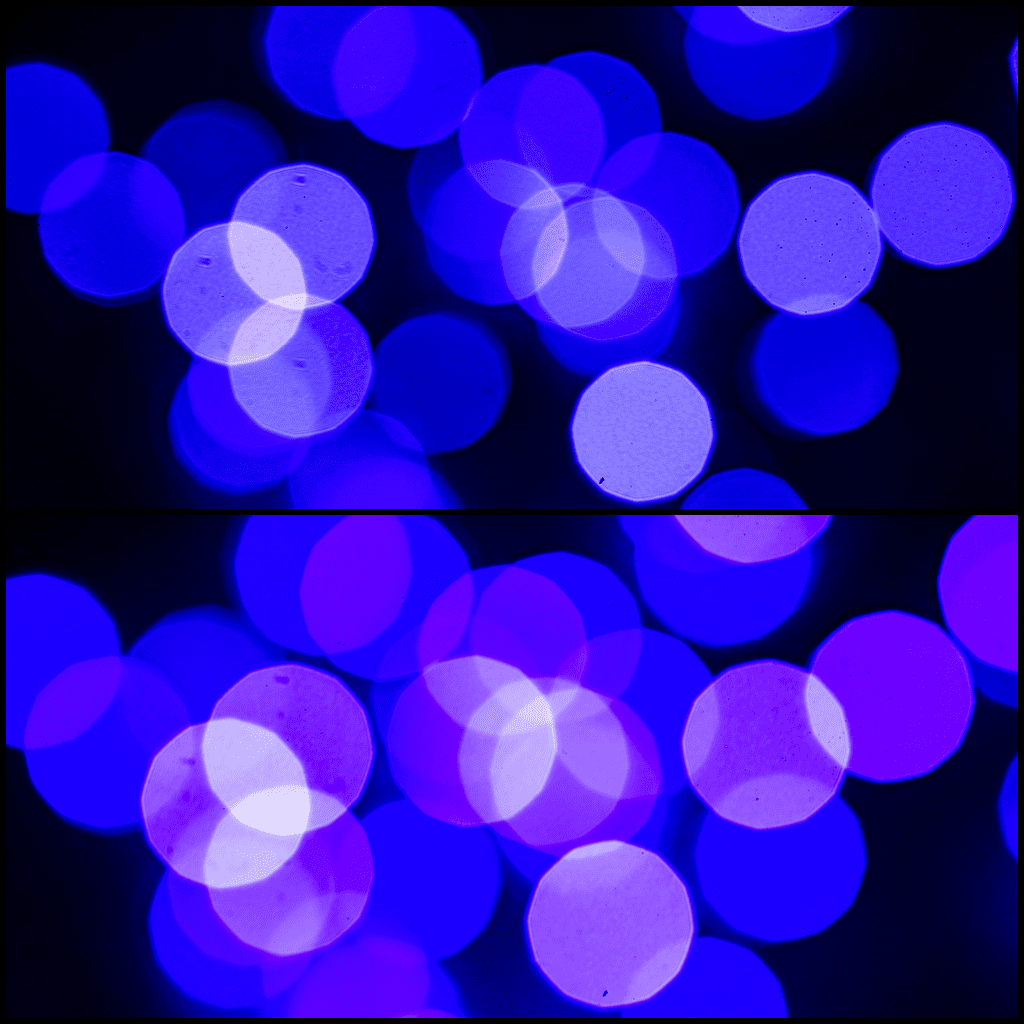 Usually bokeh is reserved for the background of a shot where you have something clearly in focus in the foreground, but I liked how these two shots (one top, one bottom, above) were kind of like blowing bubbles. I played around in Lightroom with saturation and clarity. They’re fun shots but they didn’t exactly scream “night” so I kept going. 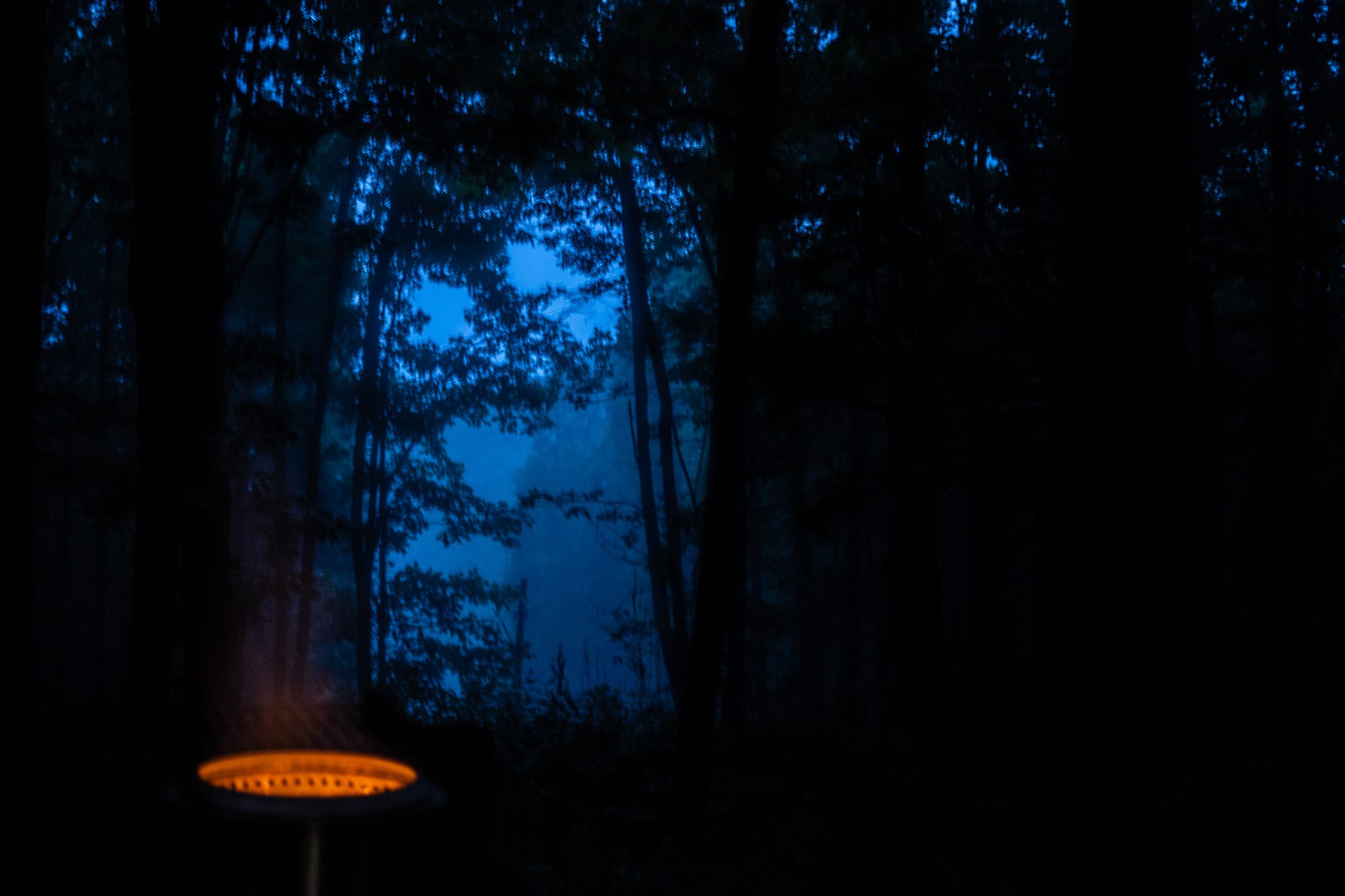 Finally, after two campgrounds and six nights, Saturday presented a decent twilight. I made a campfire and enjoyed the misty evening. And that’s when I realized I might have a shot. The view from my chair was straight through the trees and into the gloaming. I played with ISO and focus, then used post-processing to emphasize the colors a bit more. The focus is a bit soft but I’m going to brush that off by saying rain makes everything soft and the image reflects the incessant rainfall of the week.

Here the challenge was to be at odds with your image. Well, not really! It was about using odd-numbered things in your composition. Try to get away from evening things up with two or four of something. One of the “rules” of photograph is that a group of odd-numbered items is more interesting to the brain than an even-numbered, or balanced, arrangement is.

With that in mind, I kept my eyes open and camera close at hand during my daily hikes. And that’s when I realized that a whole lot of nature is all about even-numbered things. The cool trees that grew so close together? Two or four, not three of them. Every single time. Cool leaves on a bush? Yep, a group of two or four. Sheesh. 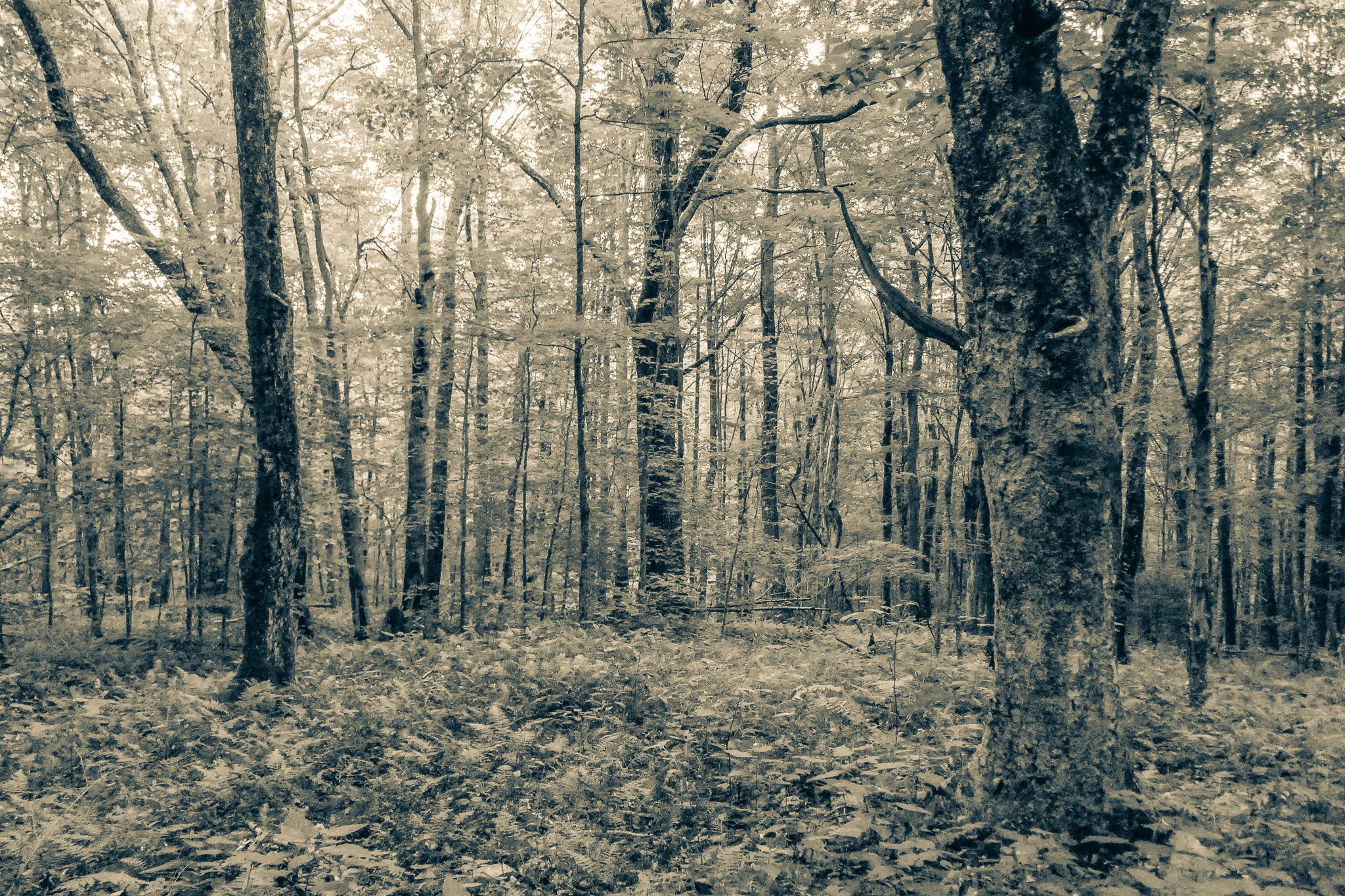 I liked this large-scale arrangement of trees, where the three of them stand out from the rest. I guess if you’re counting, this image has a zillion trees, but I focused (pun intended) on three in the foreground. I used my sepia experience from the New challenge to emphasize the three trees more and fade the rest into the background. Having sepia tones instead of the brilliant greens of the original shot also helped in that regard. 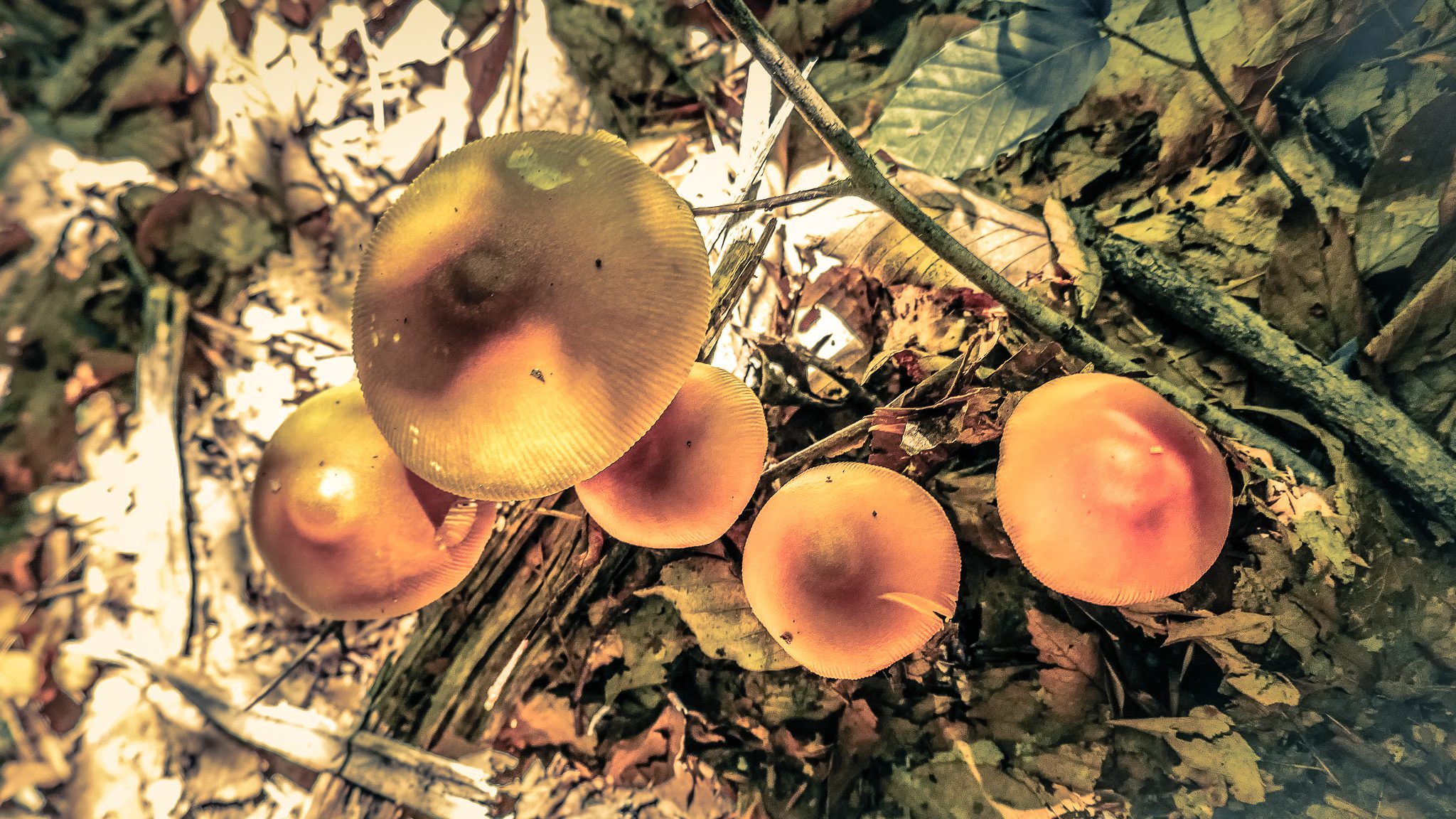 By Thursday, I was begging nature to work with me in my search for odd-numbered naturally-occuring things. On an afternoon hike, this grouping of mushrooms accepted the challenge. One big one, four little ones all lined up and ready for their closeup. I obliged, although my knees did not think that squatting to get the shot was that much fun. Mushrooms only really grow where it’s always damp so sitting down on the muddy trail wasn’t an option!

OK, I just made that last one up because I like lists with an odd number of items.

When you’re experimenting you have to try so many things before you choose what you want, and you may go days getting nothing but exhaustion.