From our very first trip in 1966, my Dad and I didn’t stop seeing places together. So on this Father’s Day, the second one without my traveling buddy, here’s to 50 years of seeing the USA with him.

While he was still working and I lived on the East Coast, we traveled from Philly to Maine, seeing the Jersey shore and the stone bridges of coastal Maine. As with most of our trips, he thought about things I wouldn’t have, like how stone bridges are made. Always the engineer, even on vacation.

In 1999, he had a major stroke, and in 2000, I moved back to California to be closer to my aging parents. By 2001, he was back on the road, visiting me and the concrete ship in Aptos. He had seen a PBS show on it and that’s really all he wanted to see that trip, besides me. He wasn’t ready to fly yet, so I drove 500 miles to pick him up and a week later I drove that 500 miles again to deliver him home.

One way my brother and I got him through the aftermath of the stroke and a grand mal seizure was to plan for NASCAR weekends. From Sonoma to Fontana, Phoenix to Las Vegas, we did at a couple of trips a year. He was a massive Jeff Gordon fan, as you can tell by the photo at the top of this post. One year, we splurged and paid for a behind-the-scenes tour of pit road. For an old Bonneville hand, it was two hours of pure heaven watching teams tune up cars, ready tires, and set up their pit road stalls.

His other passion, replacing the tennis and golfing he could no longer do, became flight. He read extensively on all types of aircraft and could ID almost anything by sound or sight. When he said he wanted to go up in a glider, well, that’s what we did one fine Saturday morning in Hemet. That’s me behind him, on the far left; he and the pilot had a great time while I did my best to not need the airsick bag.

Of all the photos from our trips together, I think this is my favorite. He’s at the airport, boarding pass in hand, ready to go. That’s how I will always remember him: excited as a little kid about the next trip. 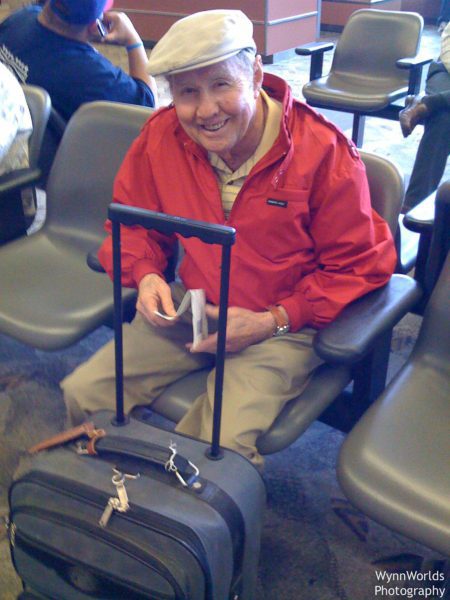 My traveling buddy, my dad.

My father gave me the greatest gift anyone could give another person: he believed in me.