To borrow a popular internet meme, here’s how it started and how it’s going:

In between these two photos, my Alto has been towed just under 60,000 miles, seen somewhere around 500 different campsites, and carried me through pandemic lockdown and pandemic camping in style, thanks to self-contained water and sewage systems. We’ve camped in snow a few times (all accidentally!), 15F freezing winds, and 95F searing heat and we’re still here. I still love my Alto. Breeze is the first home I ever truly 100% owned and I can’t yet imagine splitting up our partnership.

Making the Alto My Own

The first few years I owned my Alto, I didn’t make many changes to it. I guess in the back of my head I was thinking I might sell it and want it to be as pristine as possible. But, life on the road is not pristine and neither is my Alto now either! It’s got scratches and scrapes, from errant tent poles (not mine!) to spiny branches scraping the sides on narrow passages. Somewhere in the last few years, I realized I wasn’t going to sell it any time soon. If and when I did, it will be “as is” and would-be buyers can take it or leave it. I decided I would make some major changes to make my vagabond life more comfortable!

First to go was the bathroom door (thanks again, Linda!). It sits in the basement of my friend’s house for now (thanks, Peg!). I have a curtain instead, a nice bit of batik fabric I picked up in Tucson. Way easier to get in and out of the bathroom, especially since that’s where my sole trashcan is. I had fun last fall, finding some nice batik fabric so I now have two curtains and I can swap them out depending on my mood (2.5 yards of 44-45-inch fabric, for the sewing crowd).

This past winter, I really dove into the whole customization thing, sparked by what could have been a major PITA. The last week of 2021, the shade that covers the big front window broke (again). I put my sewing skills to use and designed a cloth cover, applying stick-on velcro to the plastic shade frame and to border of the cloth shade. It took me a couple of tries over a month’s time to figure out the best design. I now have a two-sided one for nighttime, to block out the light, and a full-sized one-thickness panel for privacy or blocking the heat during the day. I also have two half-height shades that I can put on the top or the bottom of the wind, to block the sun or for privacy. Yeah, I might have gone a bit overboard, but I actually have used all four of them in the past three days, so maybe not. (Contact me if you want details on how to make one.)

Wait, you might say, where’s that big Alto table? My latest project has been to make the front area more functional. I do a lot of writing and photo editing so I wanted an actual writing desk, or as close as I could get to one. I combined the legs of a folding table (thanks, Amazon!) with a custom-cut piece of 1/2-inch bamboo created by Tucson Woodworking. They also cut me a shelf that has replaced the left side of the opening usually covered by the narrow front cushion, giving me easier access to that area. I now use it to store camera gear and books. I can also set things set things on top of the shelf as I’m working at the desk, which is super-handy. When it’s time to move, I just fold up the table and lay it on the bed. (Note: In five years, I used the front area as a bed, which requires the original table, exactly twice, so I’m not worried about the whole “make it into a bed” feature.)

How Durable Is an Alto?

People often ask me how good the Alto is. Here’s a list of what has broken in six (SIX!) years of full-time use:

Considering that the Alto trailer isn’t designed for full-timing, it been a solid workhorse for the last six years. For example, propane regulators last about 10 years, but that’s based on part-time use. That I got five years out of mine seems about right. I still remember Denis, my patient and kind salesperson at Safari Condo, telling me in 2015 when I placed my order that Safari Condo doesn’t market their trailers for full-time living and me saying I would just see how it goes. (So far, so good, Denis!)

I am disappointed that the window shade didn’t last longer than two years or so, but I think that’s a combination of the weight of it (it’s a BIG shade so it’s heavy) combined with strings that aren’t thick enough. And, yes, using it every day for two years is more than some owners will use it in years. I like my funky batik window shades and they’ll be fine till I get back up to Quebec at some point to get a new shade. I still love that big window view, despite the issues. (Side note: Recently, I was able to see a new Alto and quite pleased to see it has a shade of a different, and better design, without the strings that were the breaking point in both of my shades.)

I’ve had people ask if I would I buy an Alto again, knowing the cost is much higher than other trailers of the same size and the wait is 1.5-2 years? Yes, yes, I would. I am one of the few full-timers I know who hasn’t switched rigs after a few years. Why not? I honestly haven’t found a better-built trailer or a better trailer for me.

I’m happy with my solar setup; the 180 watts of panels on the roof combined with the 100 amp-hour Battleborn lithium-ion battery means I haven’t had to use my generator in over a year. I’m actually thinking I might sell it next winter if I haven’t had to use it by then.

The Honda Ridgeline I got back in 2020 has been a superb tow vehicle. It’s easier to hitch up the trailer, it holds way more stuff, and the bigger weight and tow capacity means I actually do sometimes forget there’s a little blue trailer behind me.

I do have a short list of things I’m thinking about changing or upgrading, starting with a new fridge with more room (same spot, the newer model is just deeper so it can hold more stuff and that new front window shade. And if I can fit it into my budget, I’d like to replace the two side windows, since not only are the corners now cracked, the surface has seen six years on the road and has the dings and scratches to prove it. Although, to be honest, I don’t really see them when I’m inside the Alto looking out, so maybe I’ll just live with them a little longer. 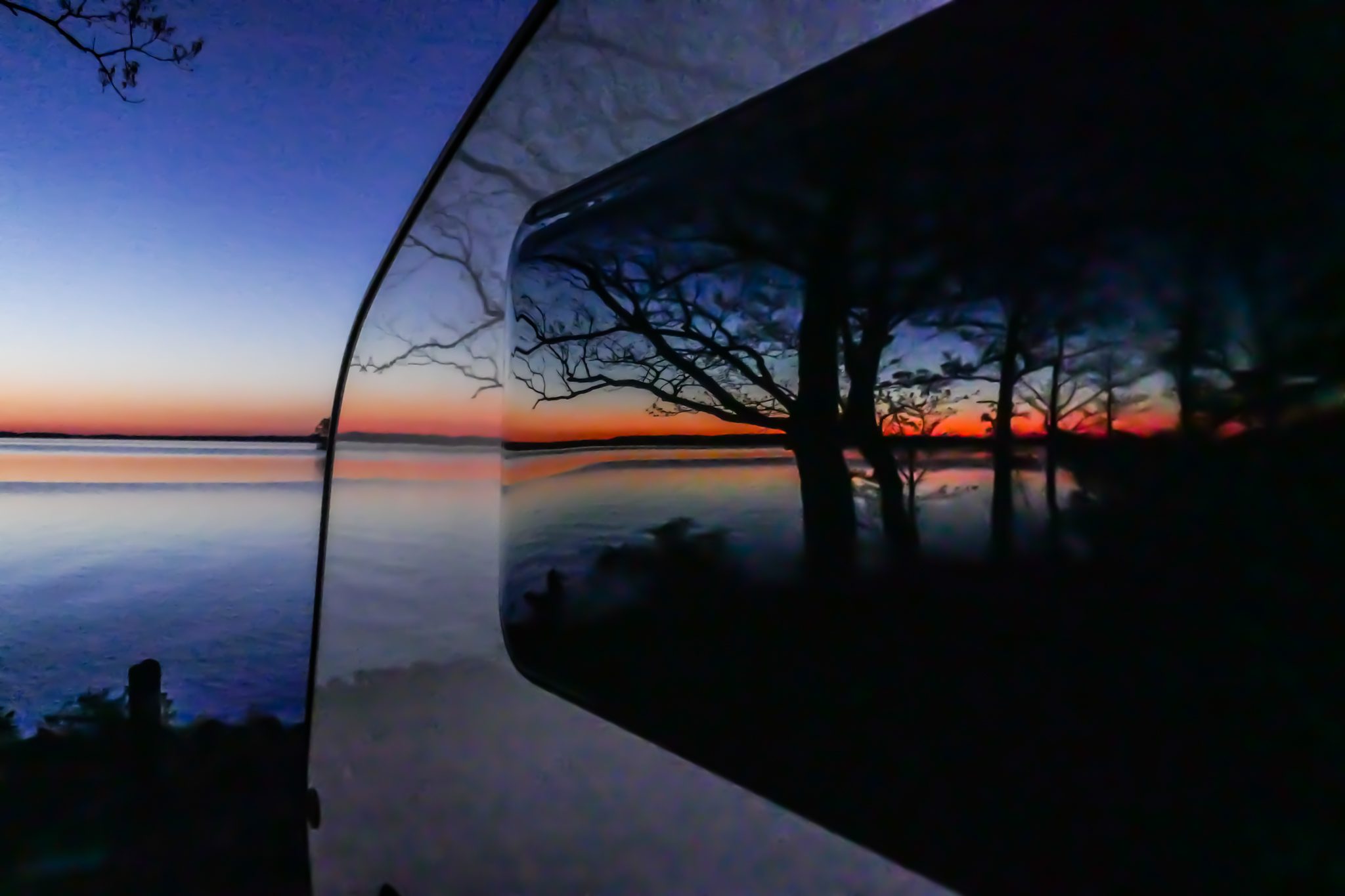 Next up: Six Years: Part 2, or how I’ve done in those six years of vagabond life.

An echo of music, a face in the street, the wafer of the new moon, a wanton thought – only in the iridescence of things the vagabond soul is happy.