Right off I-40 on the old Route 66 mother road through Santa Rosa, New Mexico is a low-slung building that hides a lot of fun if you’re any kind of a car buff. I should have known it would be good, there were three shiny new Corvettes in the parking lot when I pulled in with my road-dusted Ridgeline. Paid my five bucks at the door and then had one of the most fun museum visits in a long while… 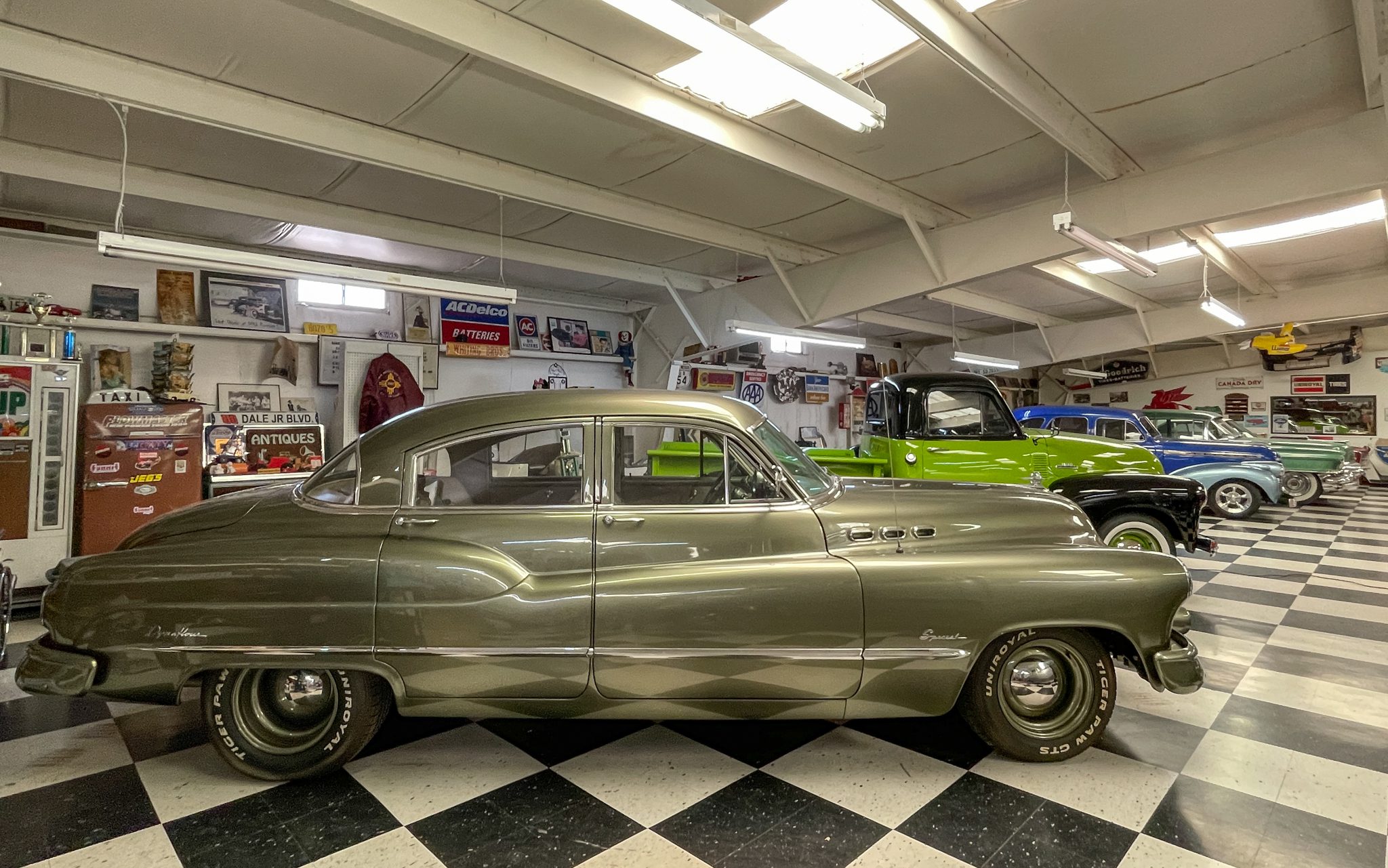 It’s the details on old cars that slay me. They evoke a time when cars were constructed with an eye to beauty as well as functionality, like this ’56 Buick Century logo. 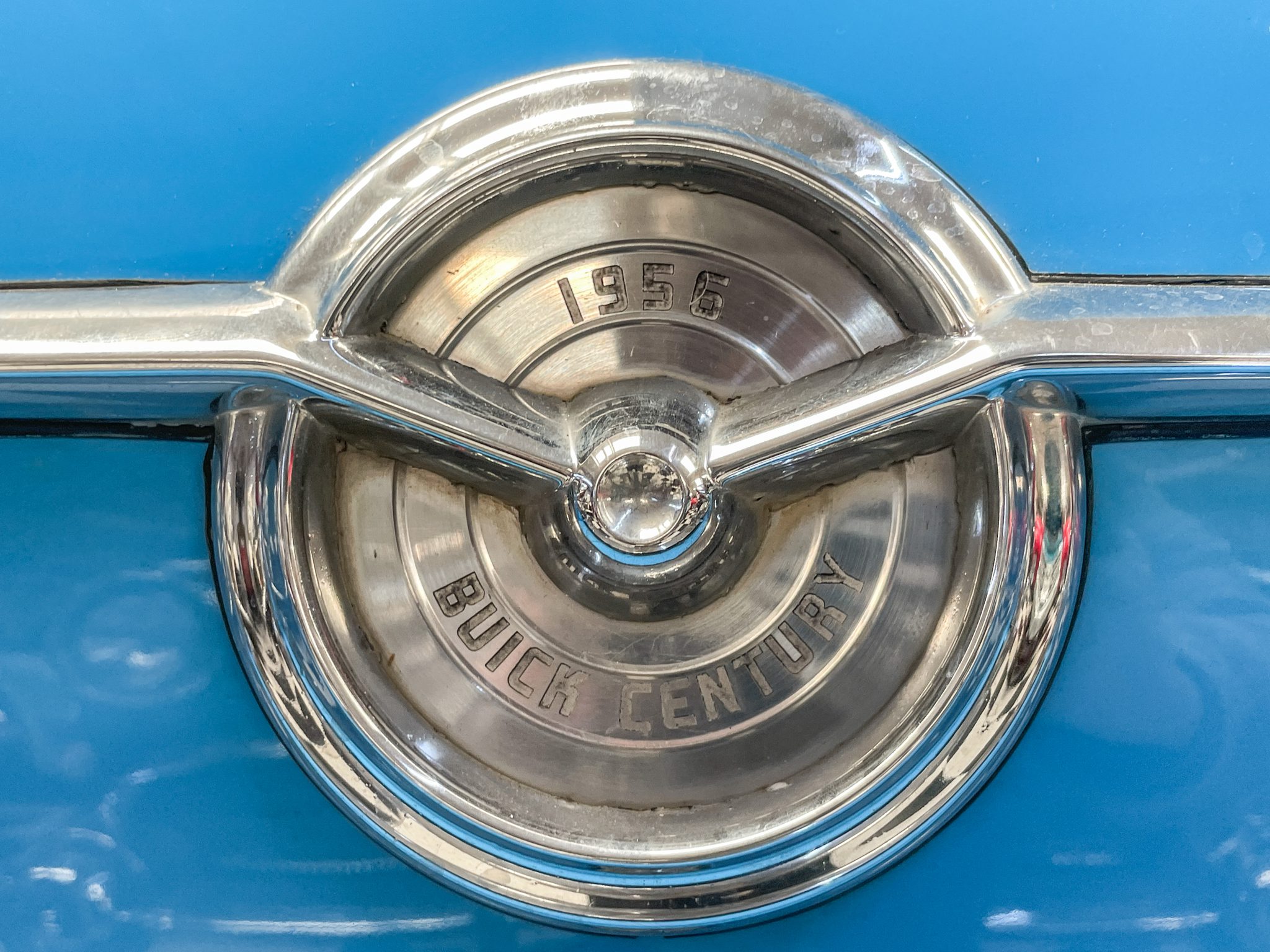 Check out these four ventiports, or portholes on the same car. For 1955-’57 models, four of these signaled a 236-horsepower 320-cubic-inch V-8 was hiding under that hood. Nice, both the design and all that engine power. 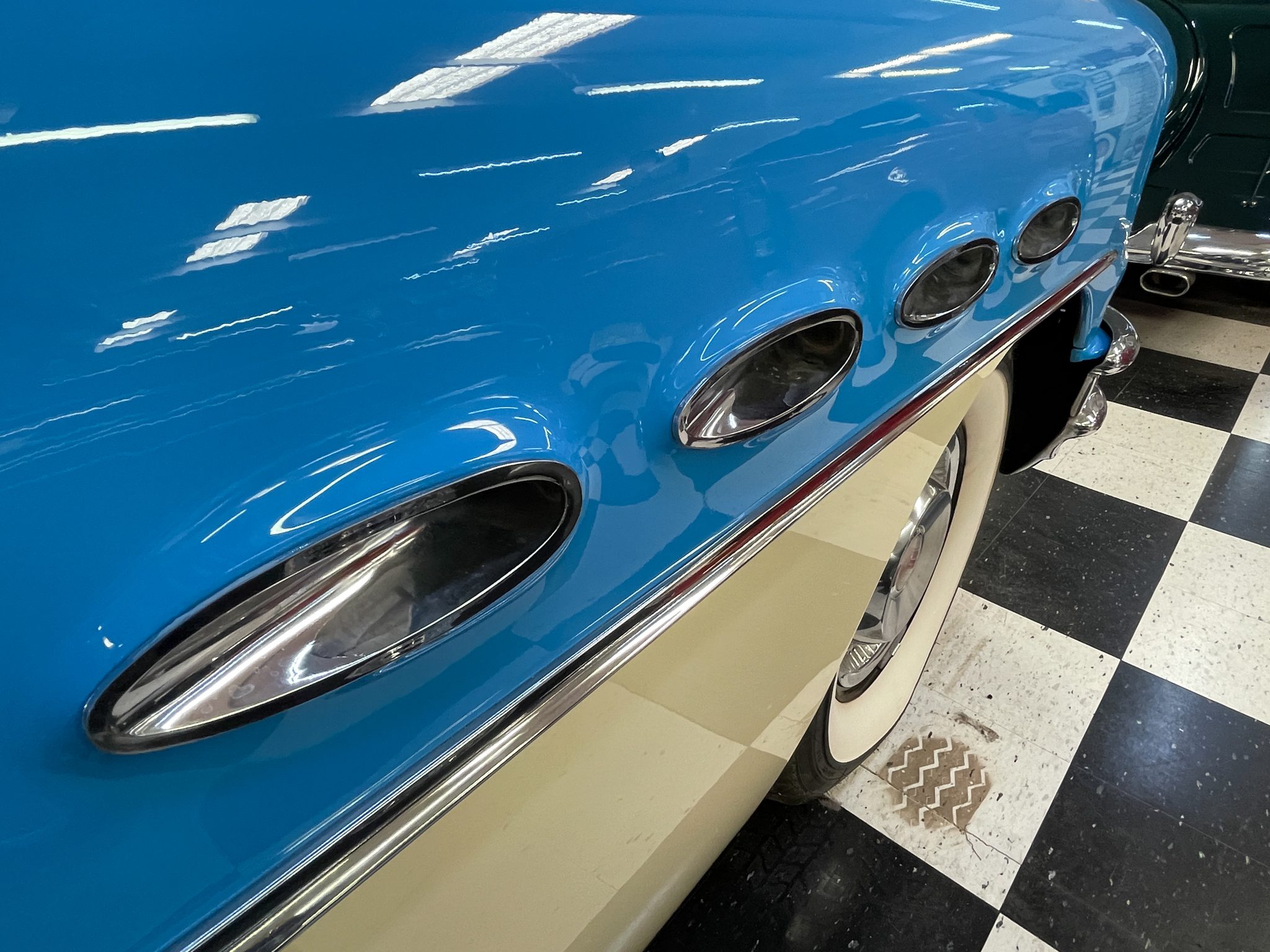 I was so taken by the beautiful steering wheels and dashboards on display. Back in the 1970s, I think, my dad had a “three on the tree” car and so I learned how to drive that, as well as the floor-based shifters, both manual and automatic. I’d actually love to have that blue one in the lower left, it’s a sweet retro look. And the half-moon metal thing on the lower half of that steering wheel? That’s the horn! Oh, it was so easy to honk a horn in those old cars. (And, yeah, I’m showing my age. I don’t care.) 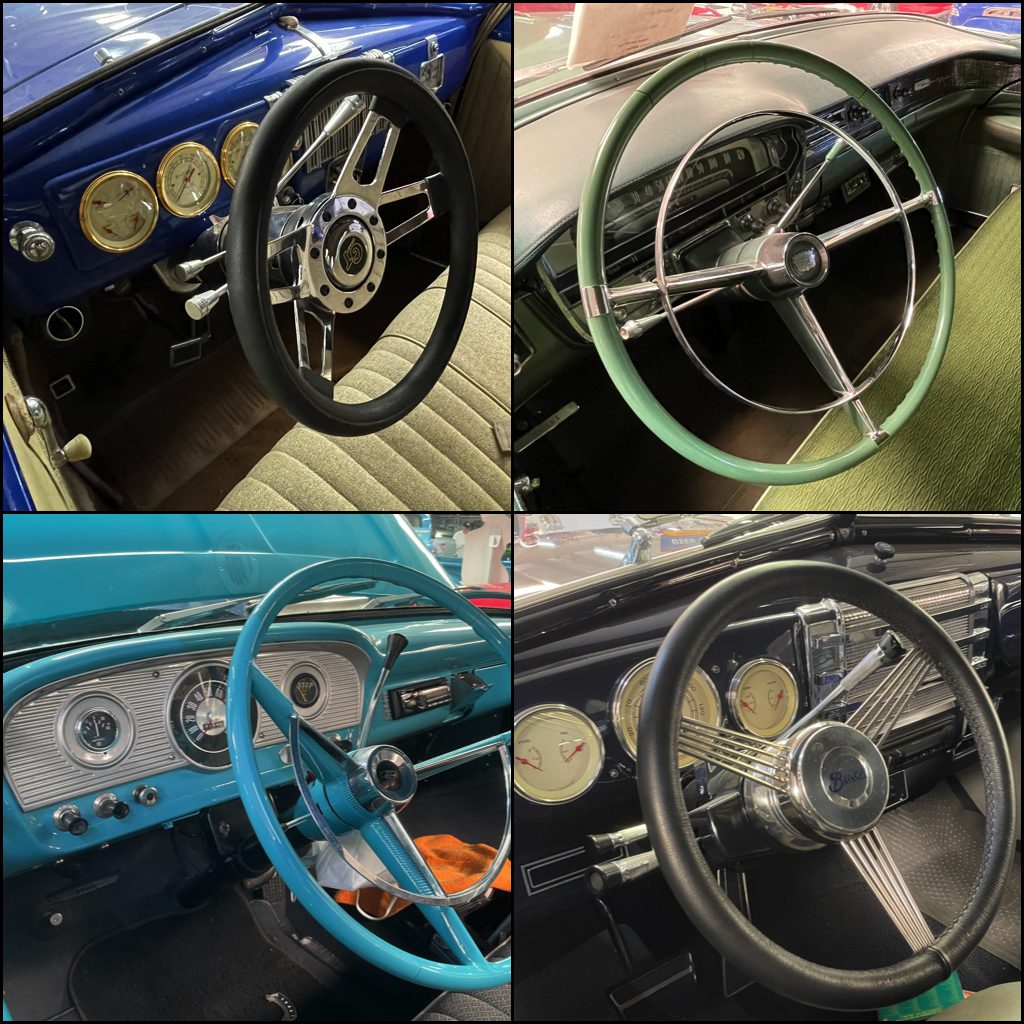 I grew up with old cars. My dad fixed ’em up, helped his buddies race them at Bonneville (salt flats) and El Mirage (dry lakes). He always managed to have a sweet ride, despite having four kids and a mortgage. So when I saw these two cars tucked away in a corner, it made me think of two of his favorites, a mid-1970s Datsun 240Z and a ’66 Mustang convertible

He loaned me that Mustang for a week and I managed to smash both ends of it in a freeway accident four days later. Oops. As my mother put it, when she called him to say the car and I had been in an accident, he did ask about me first, so he got points for that. And then he spent the next few years searching junkyards for spare parts to rebuild the car from the frame up. The only thing he had to buy new was the pony logo for the front grille. (I was fine after that accident, in case you were wondering. I was more afraid of calling home to tell my parents the car definitely wasn’t OK at all.) 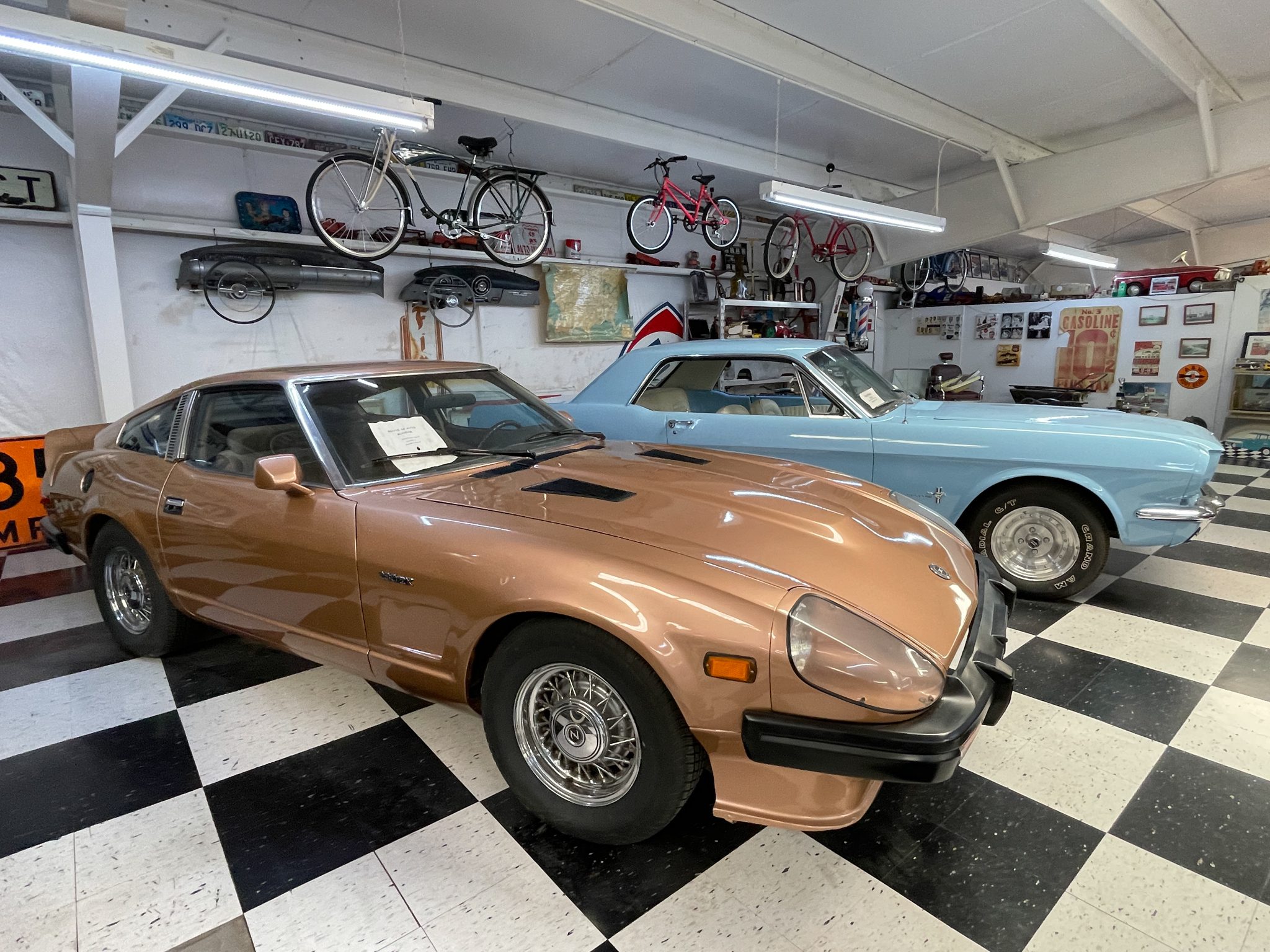 Anyways, back at the auto museum…

If I had $245K and a serious trust fund to keep it going, this would be my next tow vehicle. That truck is sweet! You could camp in that back seat and put so much in that long bed. 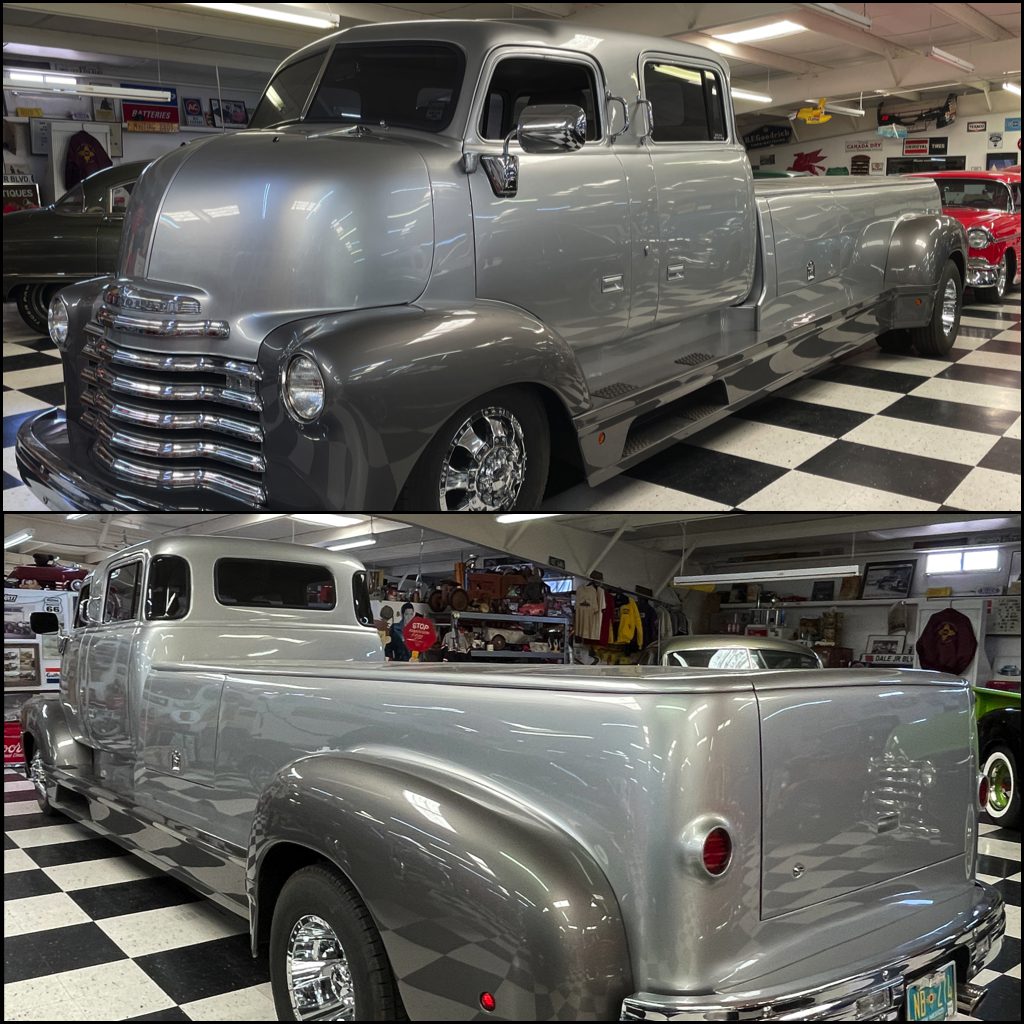 I’m putting this last shot in for my friend, Larry, who loved his Harley so much and met me for a caravan in Iowa one time. Whadda think of this baby for your next ride, Larry?! 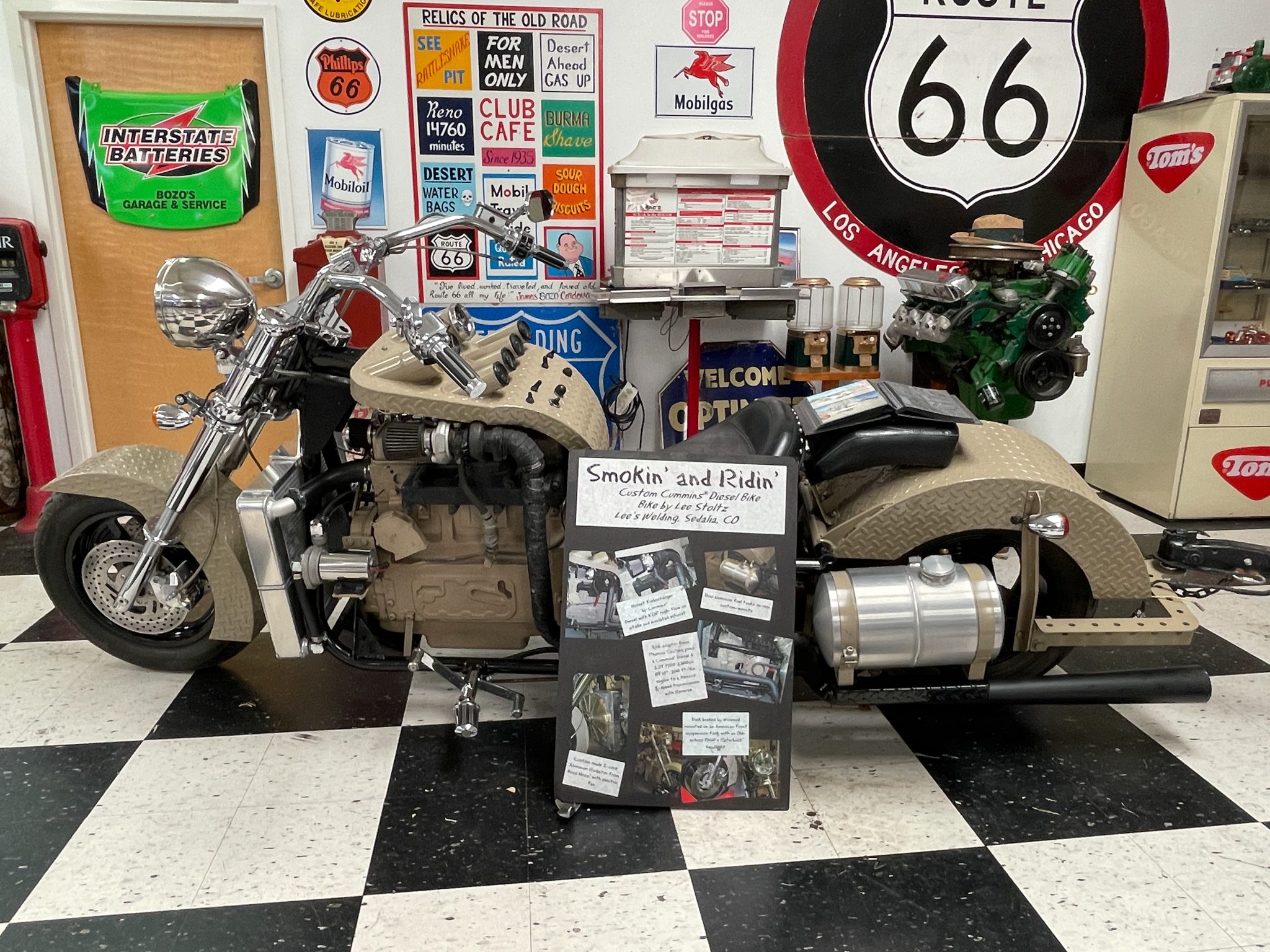 If you’re not a car person, this museum isn’t going to float your boat. If you appreciate classic design in any format, it might. If you love old cars and strolling down memory lane, then take an hour and stop in if you’re in Santa Rosa, New Mexico.

Never trust a mechanic who drives new cars. They’re either charging too much money for their work, or they can’t keep an old car running – maybe both.