I still miss my Dad the most when I’m driving down the road and see something I think he’d like or that he could tell me about. He was great about explaining power plants, substations, roadside geology, and all kinds of things. As I was wandering around the southwest this past month, I realized I was retracing his steps, mostly on trips we had taken together “back in the day” as they say. So on this, the fourth anniversary of the day he left me to travel on without him, here’s a post for the old man.

Every August when I was little, Dad and his car buddies would caravan up to the Bonneville Salt Flats to race the cars they’d worked on all year. They drove up through Death Valley and Scotty’s Castle, and as a little girl, that name “Scotty’s Castle” just sounded magical. Here’s a photo of him in the early 1960s, posing in front of the main house. 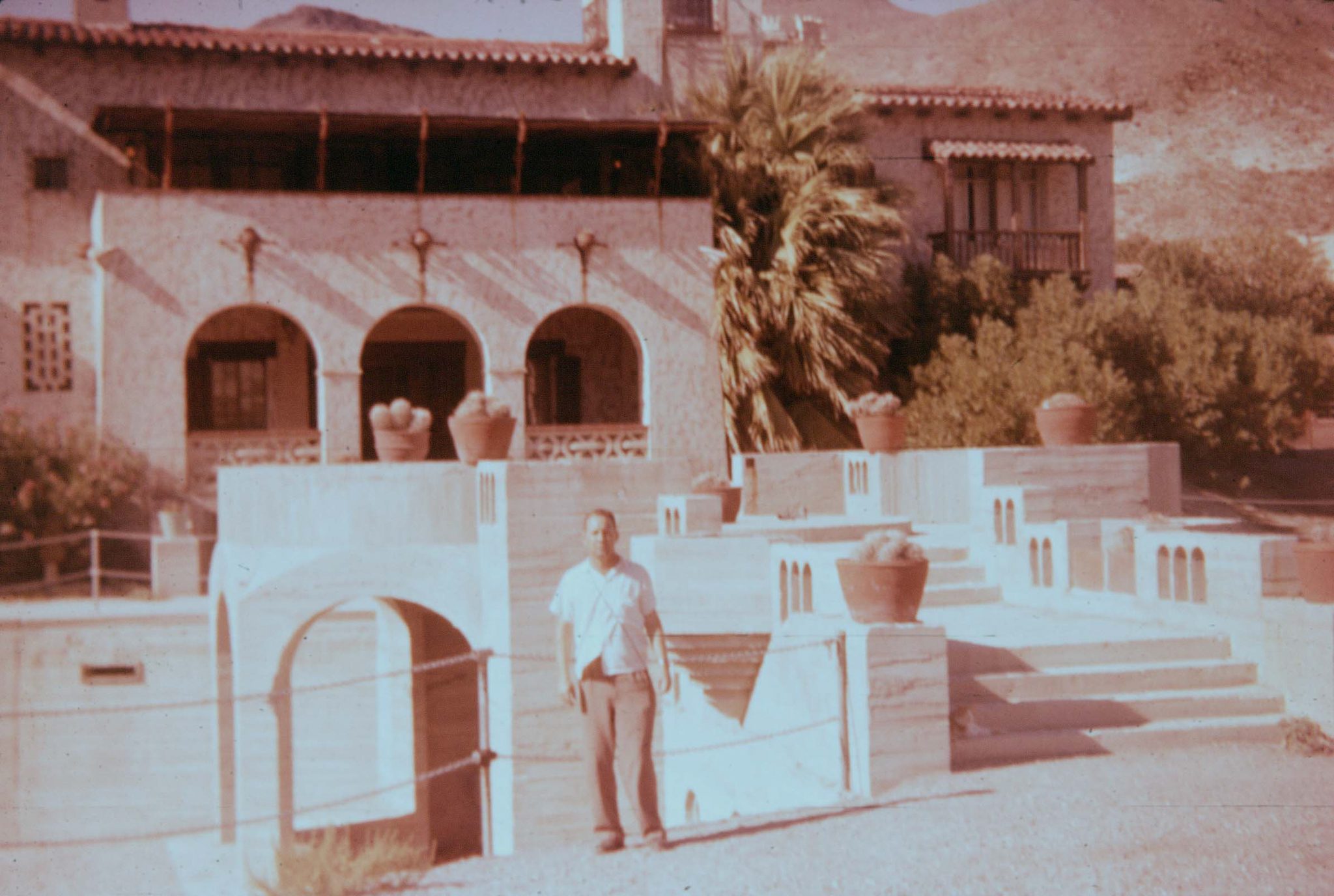 And here’s me in front of the same house, last month. I finally made it there, and it was actually about as cool as I thought it would be. A bit colder in January than in August, though. 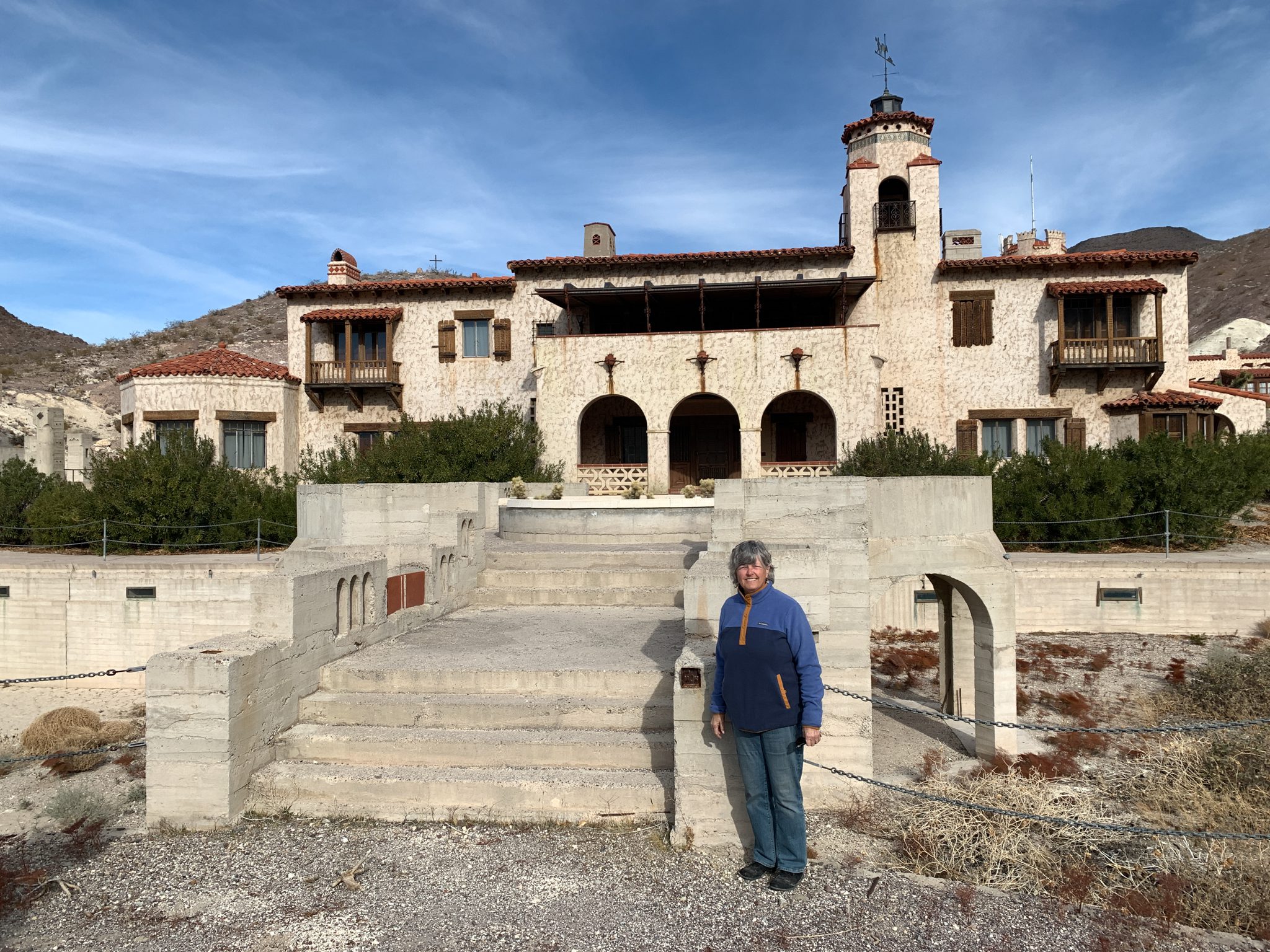 Way back in 1989, I think, my Mom bought a new Camaro with a Corvette engine under the hood. My Dad somehow convinced her to let us take it on a road trip through Arizona, where it got snowed on at the Grand Canyon (and I learned how good the Camaro traction control system was when I slid in the parking lot!). We went south from there and visited the Palo Verde nuclear plant outside Phoenix, the last place he worked before retiring. I remember taking this picture of him about five minutes before we got back in the car and he grinned and told me to “stick my foot in it.” I got that Camaro up to 120 mph before I lost my nerve and lifted my foot off the gas pedal. 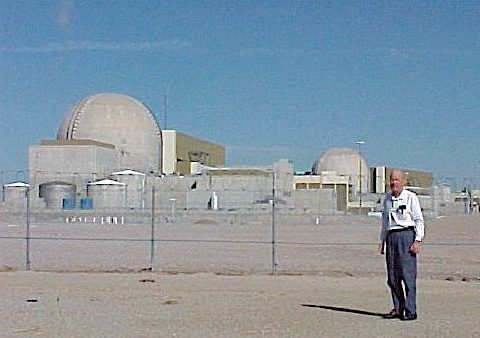 While I was boondocking near Tonopah, Arizona last month, I realized I wasn’t that far from Palo Verde, so one day my friend Stacy and I drove over there, specifically to take a photo of me in front of the containment domes. I had a vague memory of the photo of my dad, and I hadn’t dug it out of my archives yet, and so I was kind of surprised how well my take turned out. 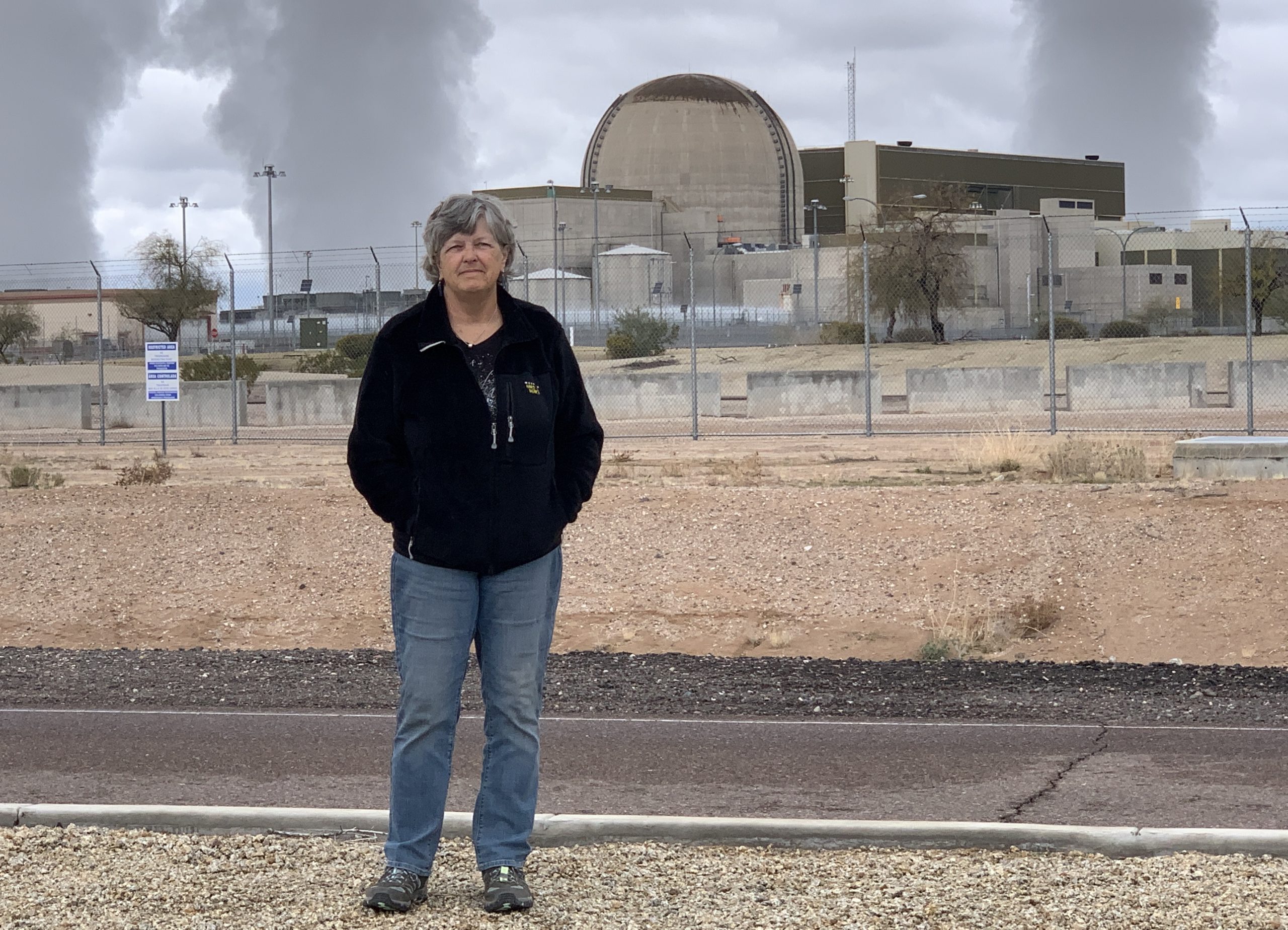 My dad was big on visiting family in eastern Arizona, where he grew up. I remember visits to Safford, the “big city” in those parts, and then side trips up the winding road to Morenci to see the big open pit mine where his dad had been an electrician’s assistant before and after the Great Depression, and Franklin, where his family waited out that Depression on a little dirt farm till the mine opened up again. Each time he and I went, we visited with cousins and I was mostly overwhelmed by how many of them there were. Back in LA, I had exactly four cousins growing up but in Arizona, it felt like dozens of ’em and I could never quite sort out all the names and relationships.

On one of those visits, with cousins in Saint David, I got what turned out to be one of my favorite photos of my dad, wearing a big cowboy hat to keep the sun off him. He’d already had a few skin cancers at this point, so he was being careful about sun exposure. His cousin, Reed, next to him in the photo, provided that hat. 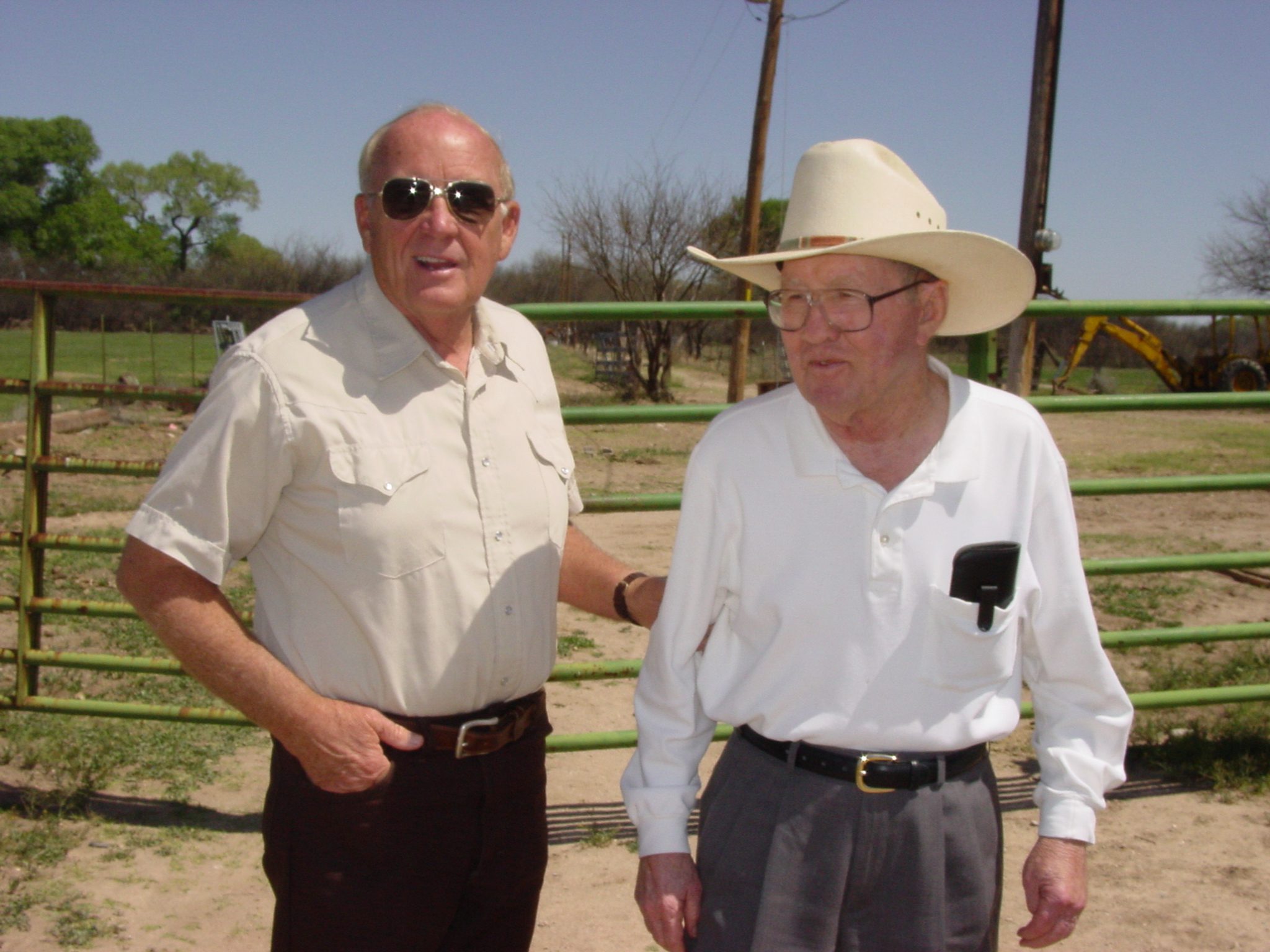 Last weekend, I was in Saint David, visiting with the cousins, catching up with each other. Reed still lives there and he still has that hat, so he and I had fun recreating the photo while his sister, Suzy (my host for the weekend) snapped some photos. Same farm, same fence, but we did notice one of the poles is gone now. And I’m pretty sure that’s the same backhoe in both photos. 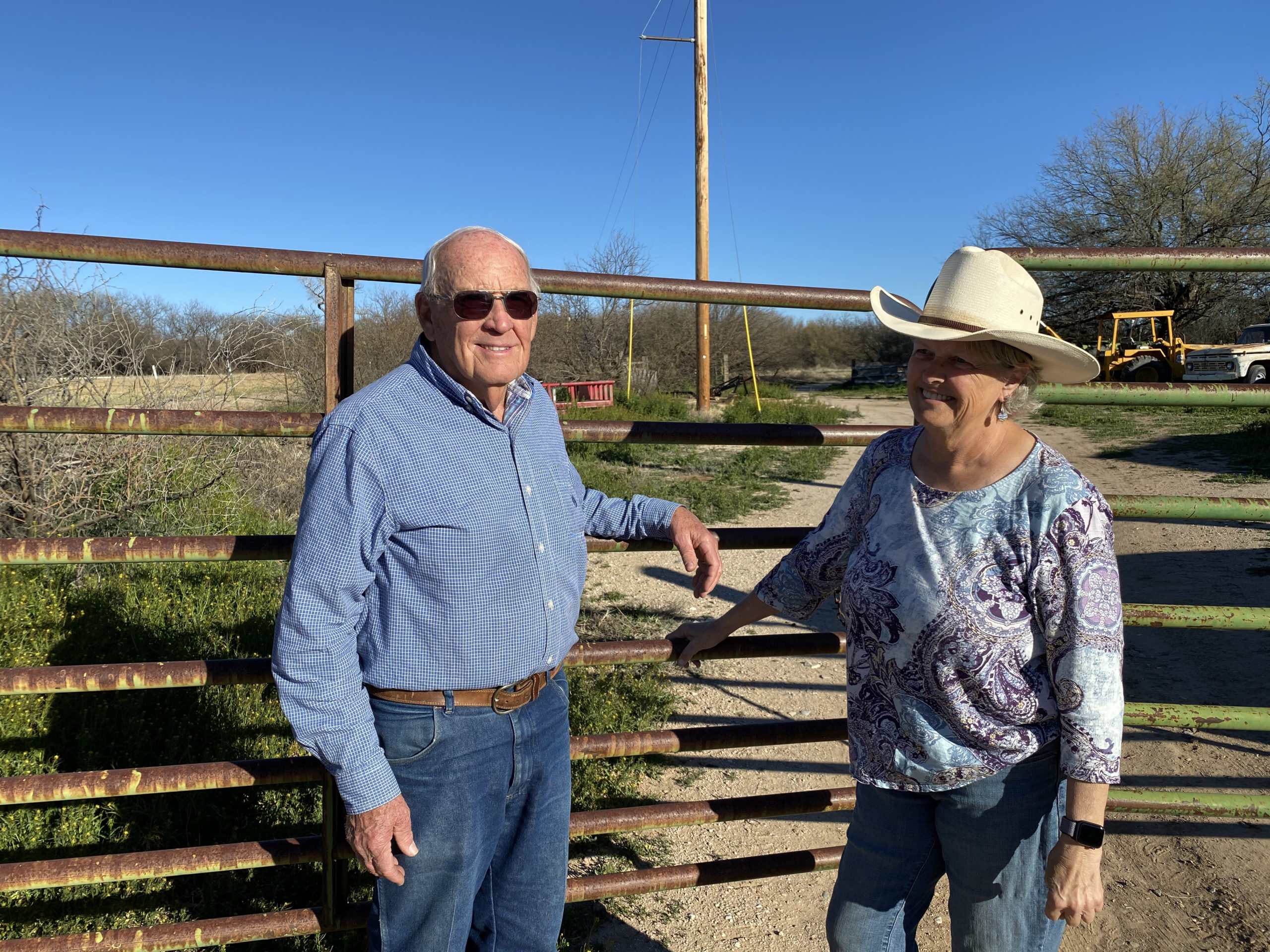 From Saint David, I drove the route I had done many times with my Dad: I-10 east then north on 191 to Safford. I didn’t need the GPS for this trip, I know it by heart. And it was at Safford that I got the last of the photo pairs for this post. I had taken this one of my Dad in front of the Graham County Courthouse when we were in town for a family reunion in the 1990s. He wanted the shot so I’d remember that this is where his parents were married in 1924. It worked; I still remember that fact. 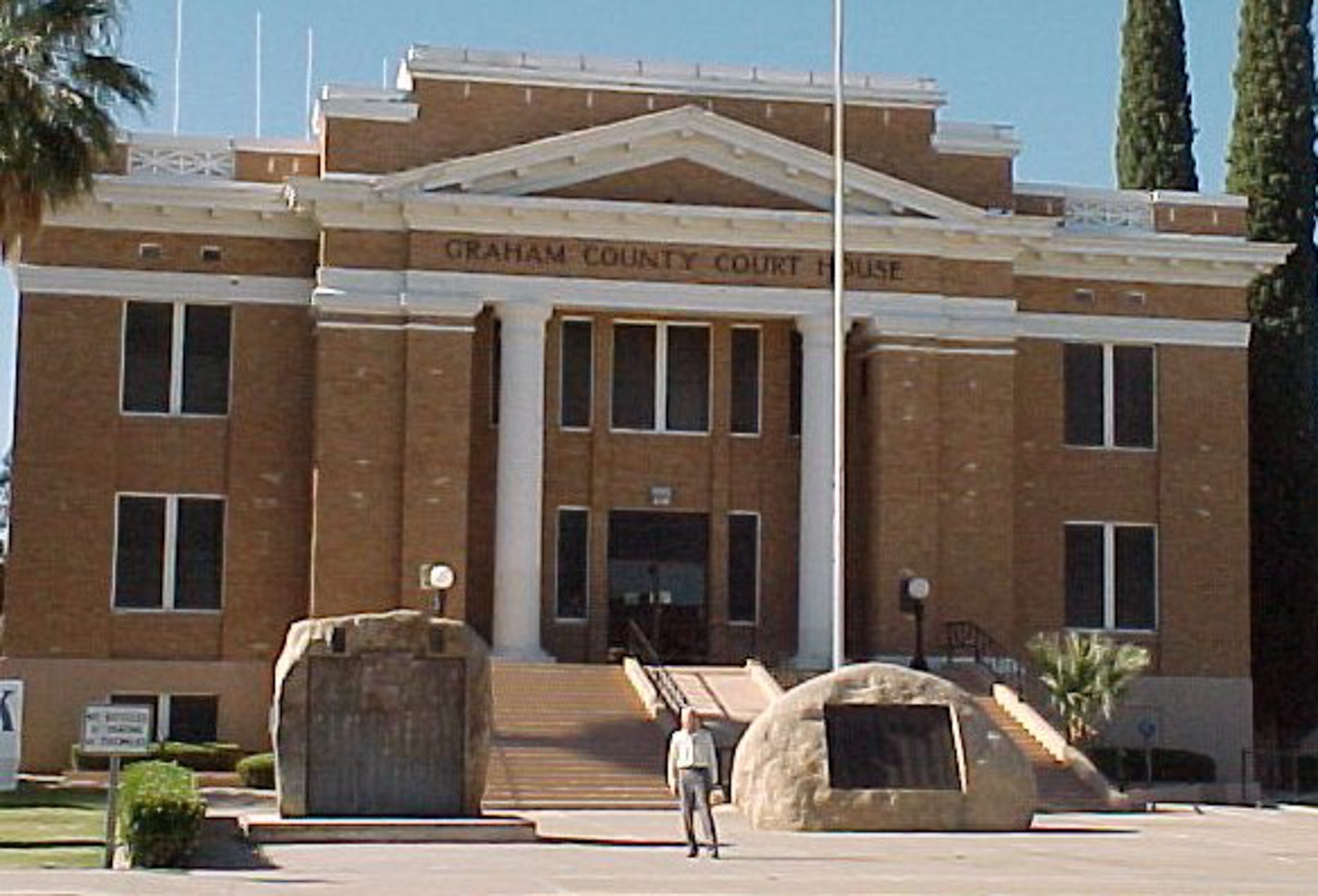 Wednesday, I parked in front of the building and asked a total stranger to try and reproduce the shot. I didn’t get her name but she actually did a great job, considering that she saw the original image for a grand total of two seconds. 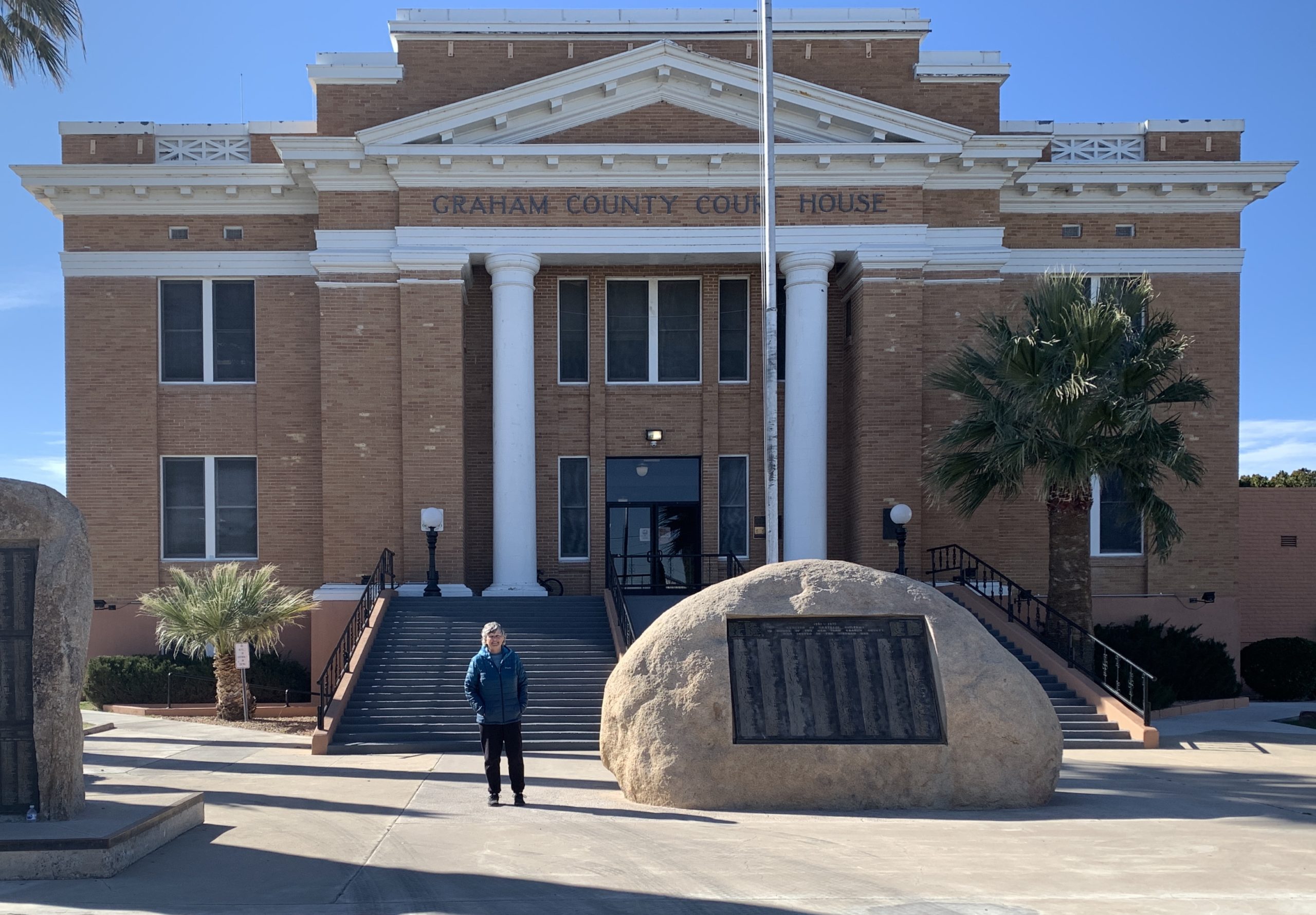 Being in eastern Arizona and seeing family this week, I’ve been remembering the stories he told of growing up here. I wish I had paid more attention back then, to the details that have slipped away and now I can’t ask him about whether it was this year or that when something happened or who said what.

One trip a long time ago, we went to see what was left of that dirt farm in Franklin and I snapped a photo of the house they had lived in during the worst of the Great Depression.The house was smaller then, just one room where the four of them did all the cooking, studying, eating, and, in the winter, sleeping. The porch was different too, it had a tin roof and it was a sleeping porch in the summer. I remember my Dad telling me how my grandmother Clara collected 2×4 lumber scraps to build the railing around the two beds, one for her and Walter and one my Dad shared with his little brother, Max. 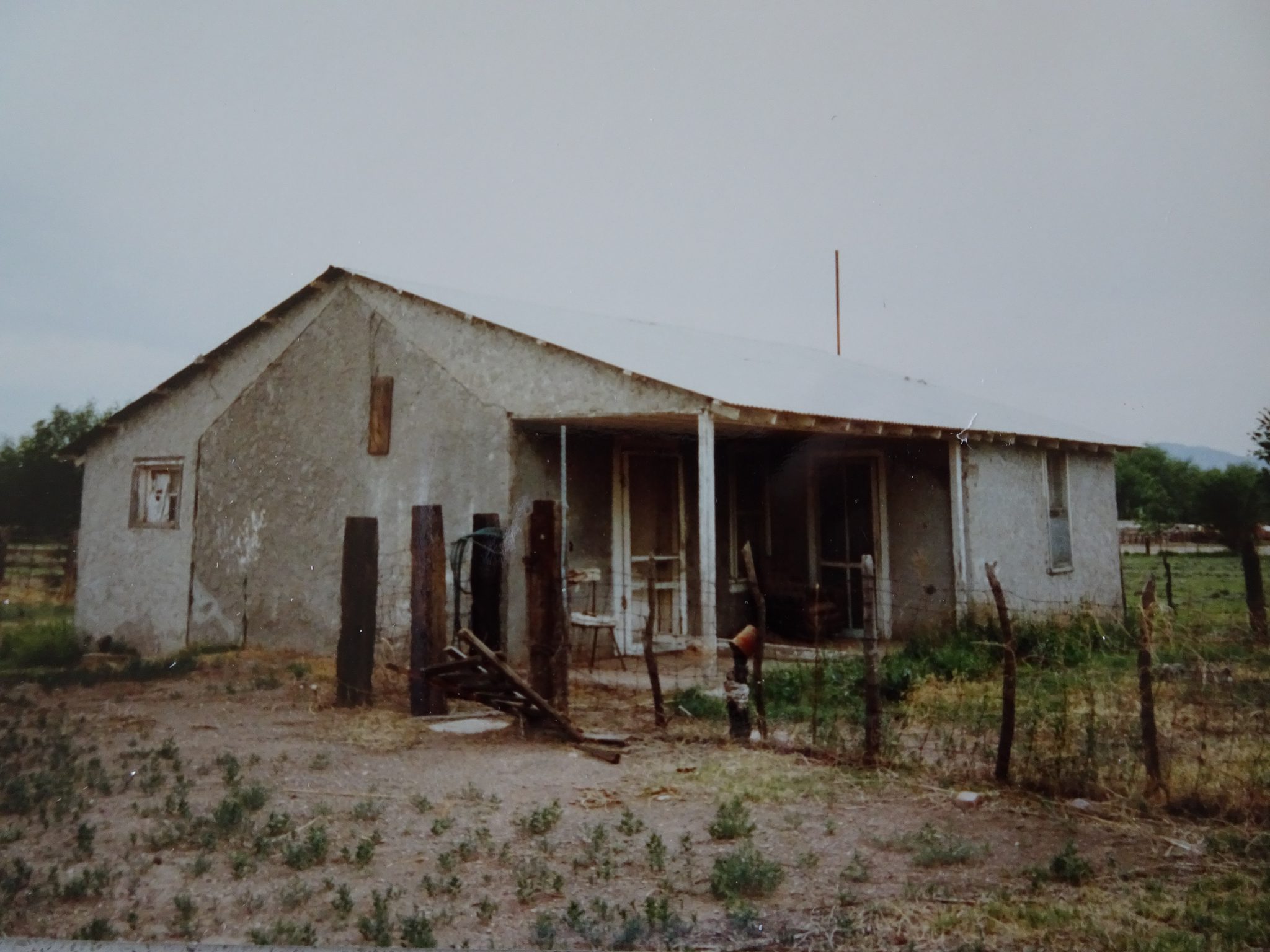 I remember bits of stories he’d told about having an old horse that he and his brother and cousins rode, how he worked one summer helping my grandmother pick cotton and how hard that was (he was 8 or 9 at the time), and how they had chickens and ate eggs a lot, to the point where it was a running joke later in life that he wouldn’t eat eggs at all, ever. That they made it through the Depression was in large part thanks to the CCC, which gave my grandfather Walter work three weeks out of four, building dams or something up in the mountains. When he came home that fourth week with $23 for his efforts, Walter would take them all into town for nickel ice creams.

I went back this week to see if I could find that dirt farm, called by a feeling I could not quite understand. I wasn’t sure where the farm was, except that it was on the state line between Arizona and New Mexico and it was hard by an irrigation canal. My cousin’s husband grew up in Franklin, so he had given me some directions, but I realized that he grew up a generation later than my dad and so he knew a different place where family had lived then, not the two dirt firms from the 1930s. With Google maps as my starting point, I went hunting down a two-lane road, hoping my memory wouldn’t lead me astray. 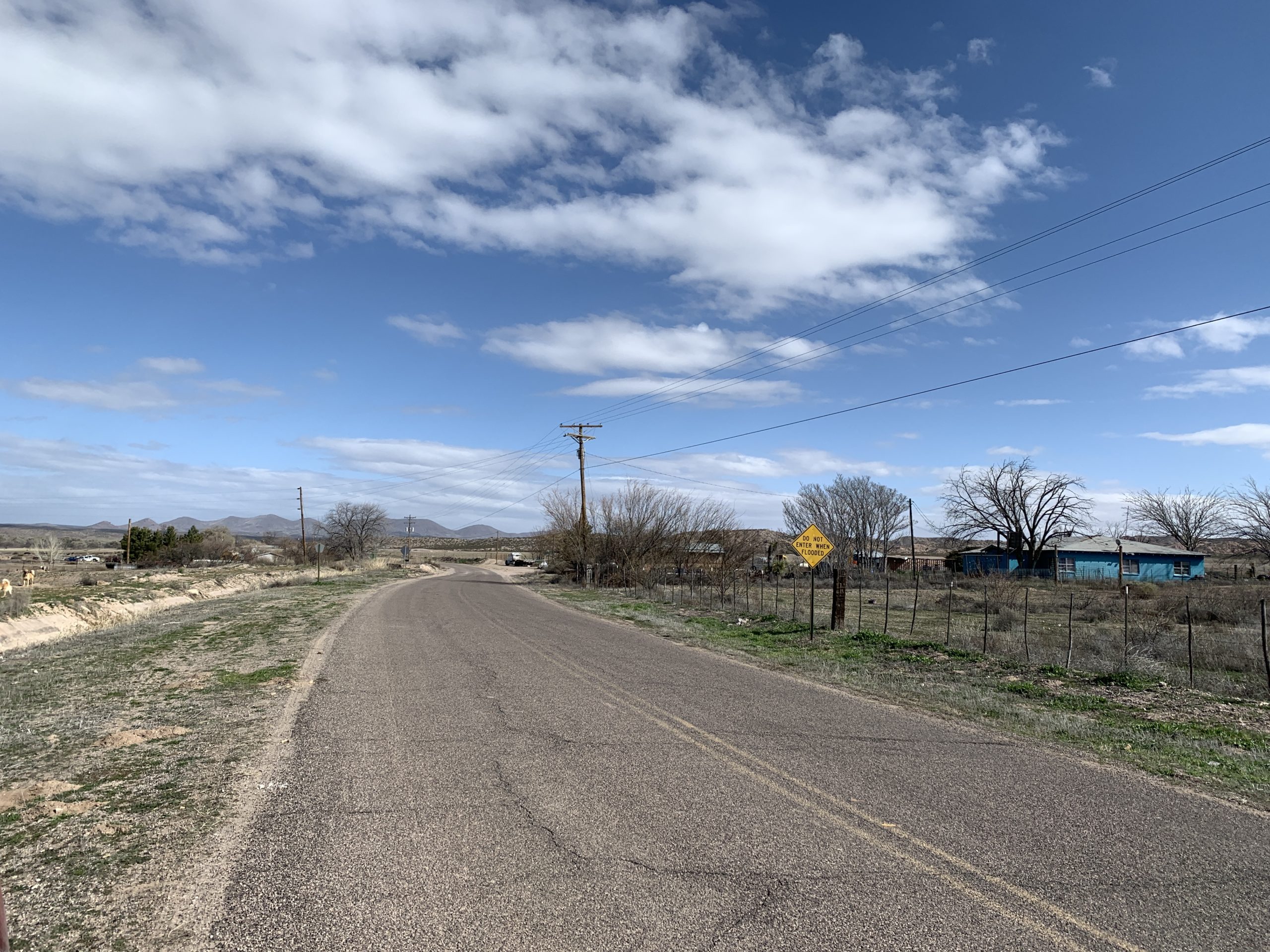 I found the irrigation canal and then the state line, and pulled over to see if this was the place. Someone has built it up a bit and there’s a brightly painted house where the old one used to stand. I wasn’t quite sure I had the right place until I spotted a familiar hill with an odd weather-vane type of thing on it. I remembered that hill and the story that went along with it. Yes, this was the place. 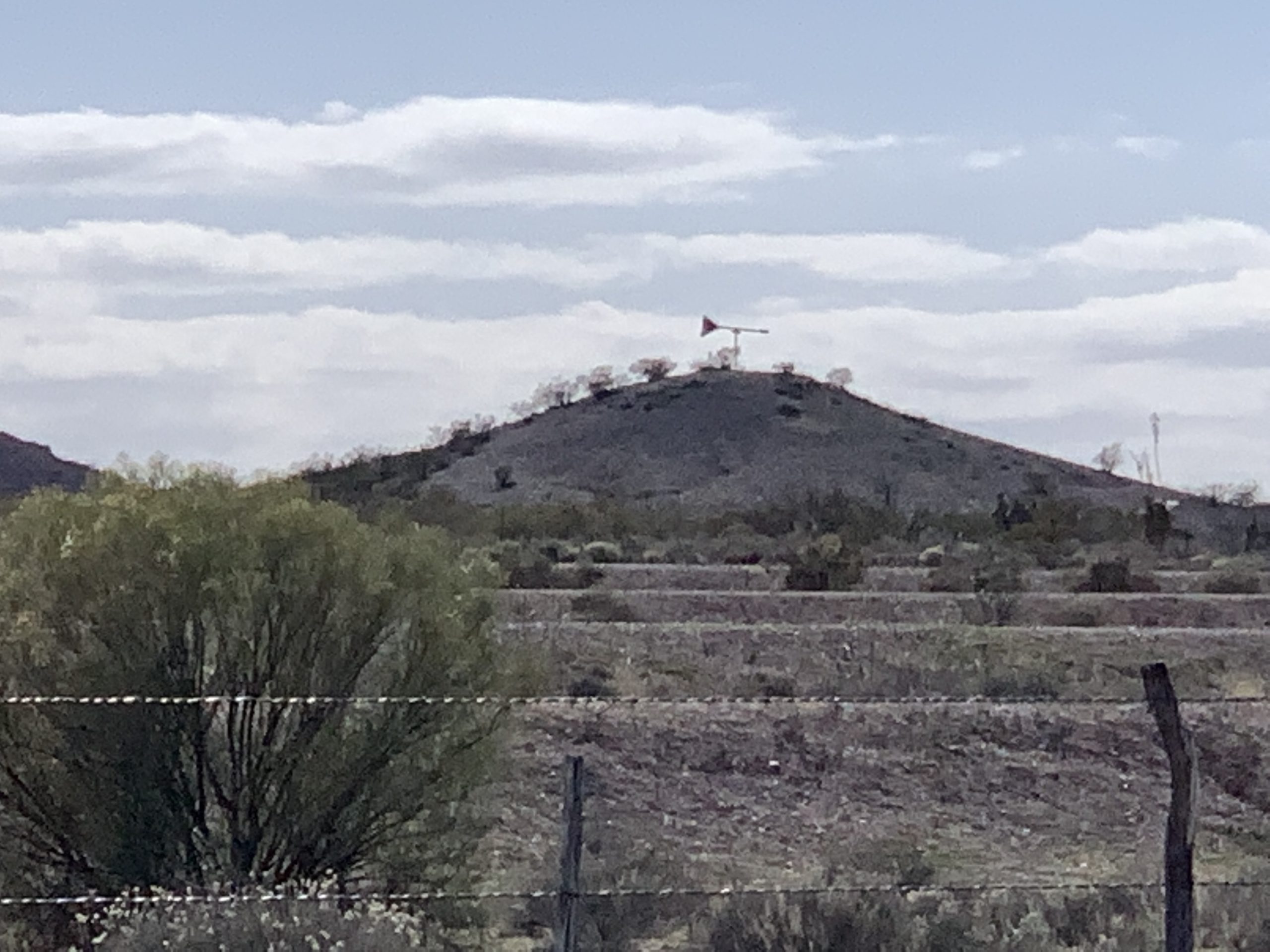 I sat in my car, looking at the hardscrabble land around me. I was born and raised in Los Angeles but this place is part of me, too. It’s the legacy he was trying to share with me each time we made that trek to eastern Arizona. The stories, the photos, the visits with cousins, the walking through cemeteries where “our people” are buried, it’s all been imprinted on me, a legacy from that little boy who grew up dirt poor and never forgot it, never wanted to forget it because it made him who he was. I get it now, Dad, I really do.

What I like about photographs is that they capture a moment that’s gone forever, impossible to reproduce.