This weekend was so much fun! We saw a lot of Albuquerque things and I’m going to tell you all about them!

Saturday, we went to Old Town, which is where the whole city started, way back in 1706. Annie’s friends, Lorinda and Alan, showed us around and found a really fun place to eat lunch. We sat outside and let the breeze cool us off.

Old Town has a big square park, called a plaza, and people were doing western dancing and selling crafts and doing face painting. I did not have my face painted because Eliza already did that for me when she made me!

There were a lot of buildings around the square, and I liked this one the best because they had dried red chiles hanging all over it! 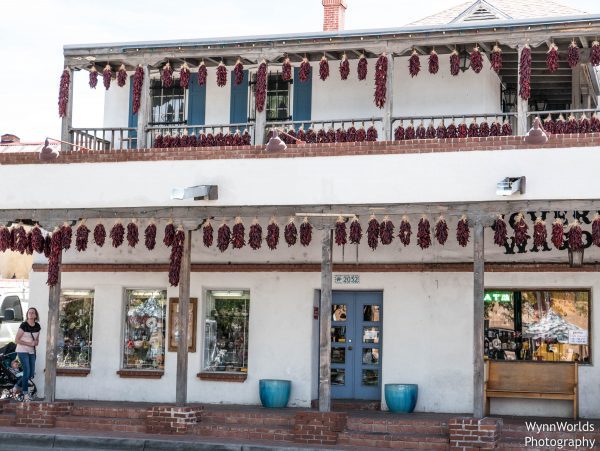 Then I ran into two gunfighters! They were really nice, though, and we joked around taking a picture together. I don’t think he was really going to shoot me, but it did make for a fun photo! Remember the cactus we saw on our hike back in February? Well, this is the cactus version of Spring! And so is this! This cactus has two kinds of flowers!! Those red things are kind of weird, though. On Sunday, we went on a drive in the car with some of Annie’s friends! They took us all the way to the top of the highest mountain near Albuquerque, and it’s called Sandia Crest.

Those are my new friends, Marc and Brigitte! Check that sign above our heads, we are TWO MILES high!! Wow, that is the highest I have ever been in my short life! And look at that snow! (Annie felt bad because she forgot my coat, but I told her it was OK because the car had a good heater and I got warm fast when we got back inside.)

Look at how big Albuquerque is! It’s definitely the biggest city I’ve ever seen! In the other direction, near those mountains, are Santa Fe and Taos, two cities that Annie said we will see really soon. I can’t wait! At the very top of Sandia Crest is this bunch of TV and phone antennas! Marc called it the Electric Forest because it’s like a bunch of trees only all made of antennas! I really like Albuquerque, it is so big and there are so many things to do there! Parks and trails and museums and gardens – wow, I didn’t know if I would like visiting a big city but it turns out I like it a lot!