After 17 months of planning, saving, decluttering, and taking more than one big leap into totally unknown territory, I finally made it to the coast. My whole vagabond vision was something like “me at the coast, taking beach walks every day” and it didn’t really get much more definite than that. Yeah, I know, there are national parks in Utah and deserts and canyons all over to see, but those weren’t what drove me forward all these months. I’m a water baby at heart, and the coastal waters are where I need to be right now as I figure out how to be retired and rewired and relaxed and refreshed.

To get to the coast from Seattle, you either go north (involving a ferry) and then around the top of the Olympic Peninsula, or you go south (through the hellish traffic that is Tacoma) and go through Aberdeen. 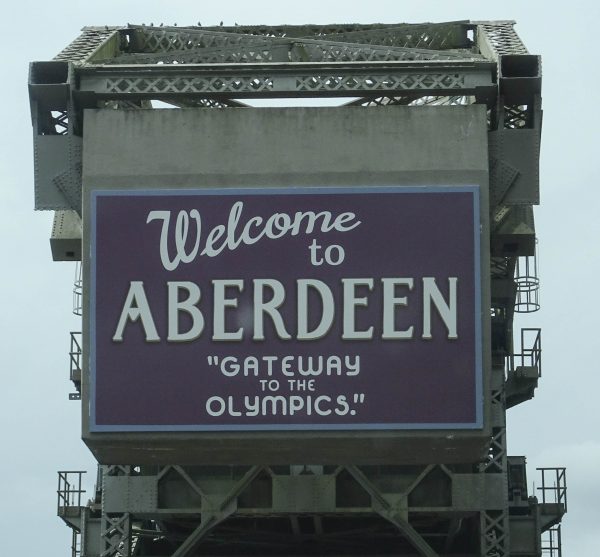 There’s another sign welcoming you to Aberdeen, but it’s on the main road, so I never get a shot at it. It says “Come as you are” which is a tribute to Aberdeen’s most famous son, Kurt Cobain, who grew up here. Man, I see why he left, it’s not much. But go through it you must if you want to reach the coast. So I did, as quickly as possible, and then about 45 minutes later, I was checked in to Ocean City State Park, on the RV loop. 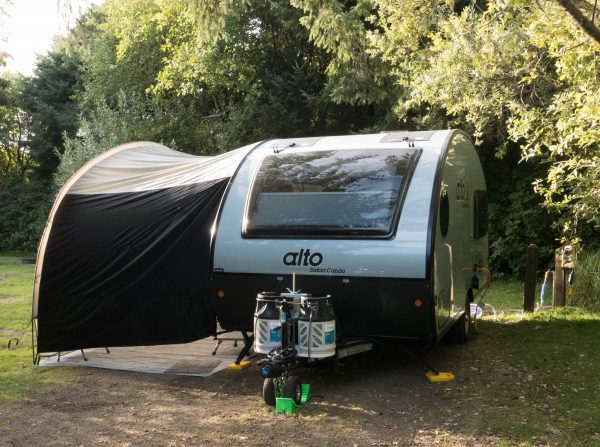 And the beach? Just a short walk away! 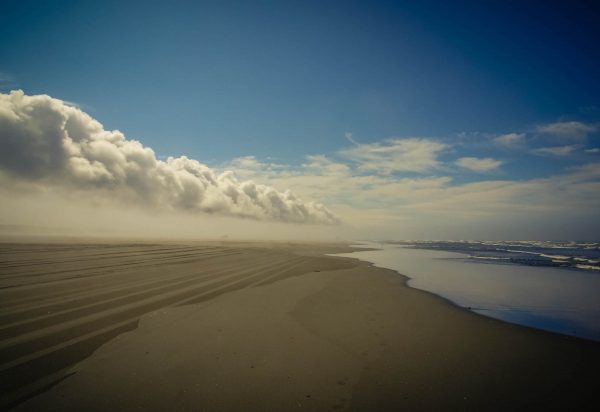 Yes, those are tire tracks on the left. Before the coastal road was built, the only way to get from town to town was driving on the beach. So, in typical Washington fashion, this right remains and even at 10AM in the morning, there were more than a dozen tracks already laid down by cruisers. I can’t complain, I did it last Thanksgiving with my great-nephew Austin because, as native Californians, the thought of driving on a beach is just bit decadent.

There are other riders on the beach, too. I waited for the right shot and took this photo just for my friend, Susan, who loves horses. 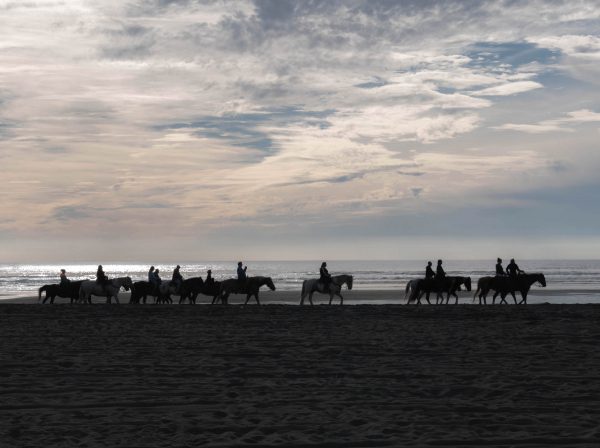 Both the seagulls and I enjoyed the local crab, as you can see. Mine, however, came from the IGA and I didn’t have to shred it on the beach to get to the meat. 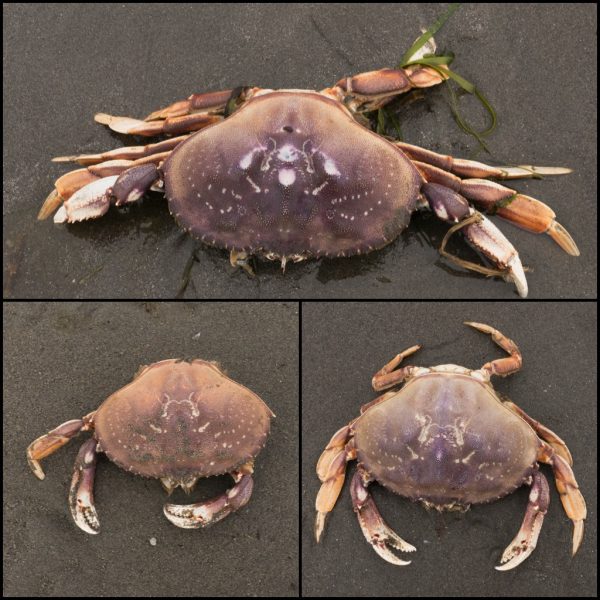 I was happy to see the bands of plovers every day. They are lovely little birds, scurrying away from me and my camera whenever I passed some invisible boundary, so I maxed out my camera’s zoom to get this shot. 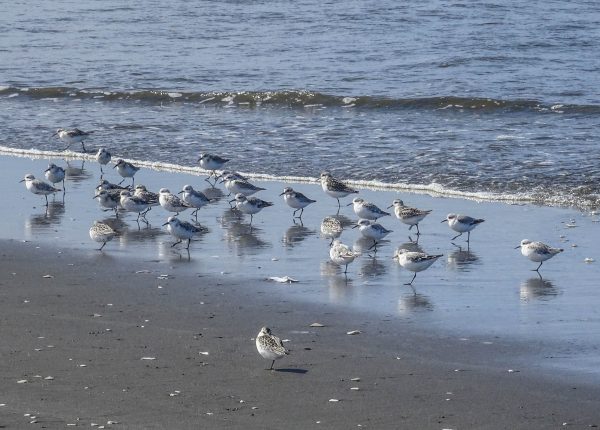 And who says you can’t make money at beach walking? I found half a (sand)dollar today… 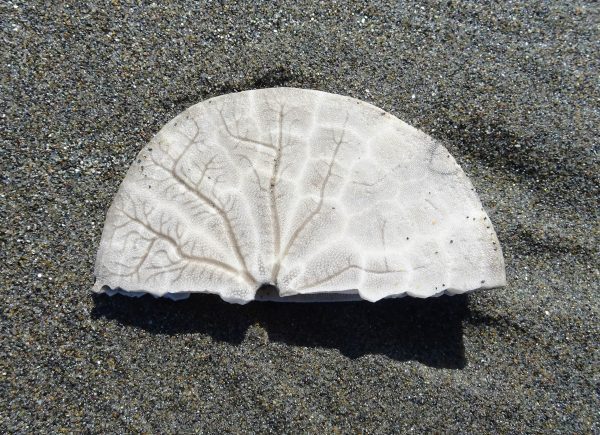 Sometimes I think I could just stand here forever and watch the waves. 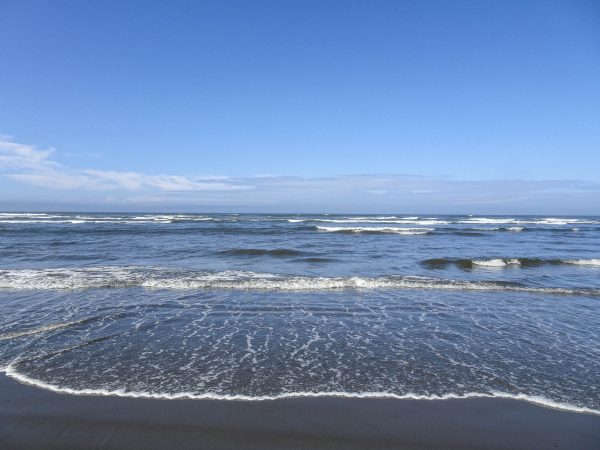 But there are books to read, blog posts to write, and different beaches to see, so I head back up the sandy path to my little home and see what the camera captured. 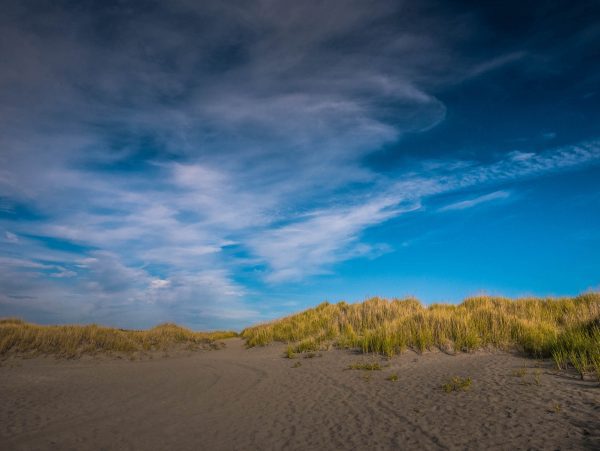 Not bad for a couple days work!

A hot day at Schafer State Park, halfway between Olympia and Aberdeen, with the trailer fully exposed to the afternoon sun meant I was looking for somewhere to hide, so that little sign saying “Forest Trails” held promise of cooler temperatures along with a bit of adventure. 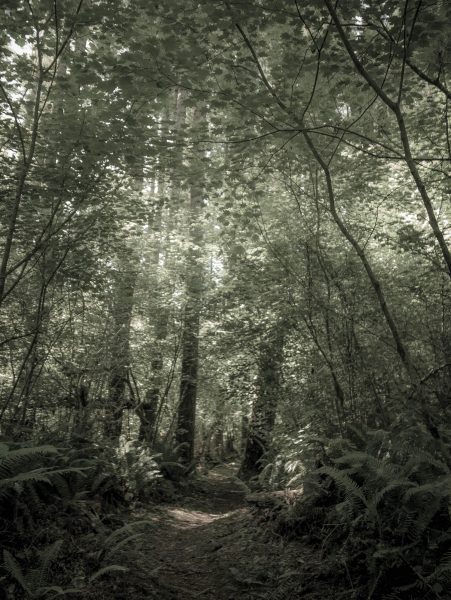 A short ways down the first trail, I realized this walk would be all about the details.

In the brilliant blues and greens of reality, the little details got lost so I used a filter in Lightroom to give them their moment in the sun. Enjoy!

In December of 2011, I flew over Mount Saint Helens in a small commuter jet and was lucky to get this shot. I was living on the Central Coast of California at the time, and, other than the 1980 eruption, I had no clue about the mountain. I just knew what I saw was breathtaking, both in size and in scope. 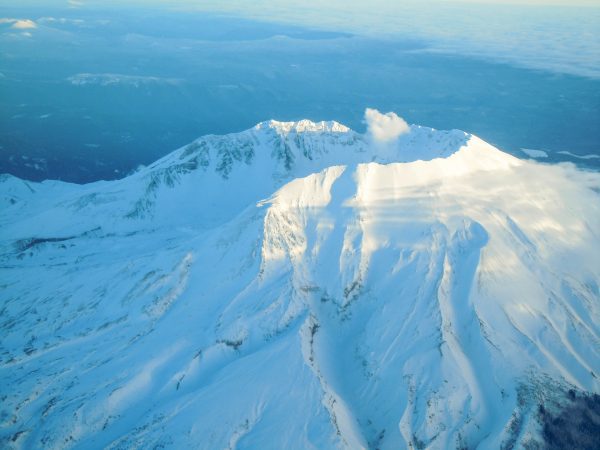 A year later, I found myself flying over Mount Saint Helens on a regular basis, as I had moved to Seattle. On cloudless days, I could look down and see the path of the destruction to the west, where mud and chunks of the mountain had reshaped the landscape that fateful day.

In 2014, I drove the east side approach to the mountain, driving through miles and miles of blown-down forests and standing-dead forests, giving me a sense of the power of the 1980 eruption beyond what I had seen from the air.

At the end of the road, at a place called Windy Ridge, I took this photo and decided at some point I would have to do the western approach, to see as much of the mountain as possible.

Today was that day, two years later. After enduring a long delay on the road due to construction season, I finally made it to the west side.

First stop was Loowit Viewpoint, where the mountain’s own weather blocked the best part. It was still amazing to see the paths of rivers new since 1980, wildflowers seeded by wind and elk, and trees making a comeback 36 years later. 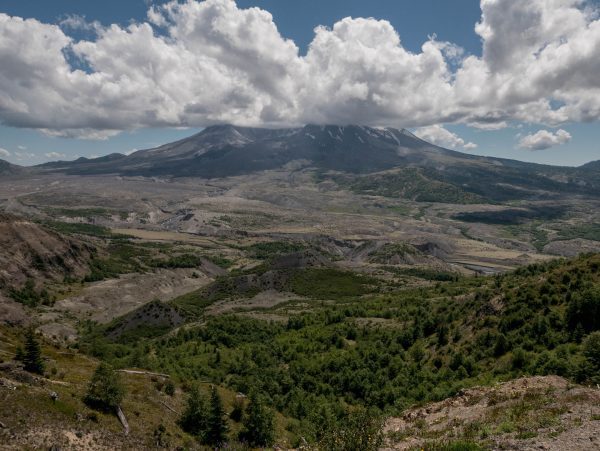 Then it was on to Johnston Ridge Observatory, named after the volcanologist David Johnston, who was camped there when the mountain blew on May 18, 1980 and swept him away in the lateral blast.

It was hard for me to imagine such devastation on this beautiful summer’s day, but when the clouds parted and I could see the top of the collapsed volcano, I got it at a gut level. I couldn’t imagine standing there facing a volcano’s fury aimed directly at me, which is what David Johnston saw in his last few minutes of life. In reading about him, every article credits him and others with keeping the death toll so low because they fought for months with scientific data in hand to keep the area closed to visitors. 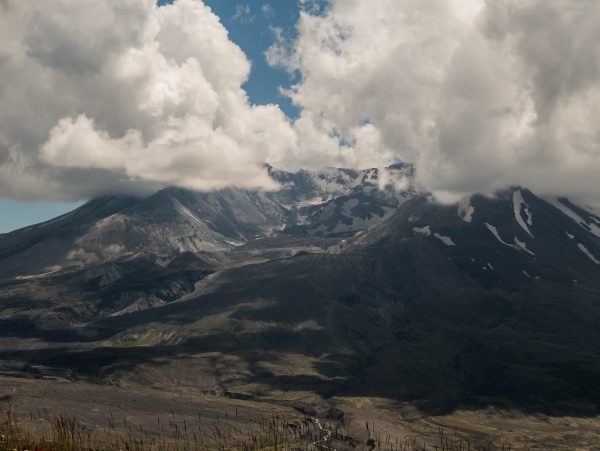 On the way back down, the clouds cleared even more and I got this one last look. If you ever have the chance, go see this place. It’s one of the great geological wonders of the world.

One of the first places I camped in my new trailer was Bay View State Park, which is about 90 minutes north of Seattle along Padilla Bay, a wide flat expanse of water with views of the San Juan Islands and even a bit of the Canadian coast near Vancouver. It’s a great place for a waterside walk, as my friends Beth and Sara found out when we went exploring one day.

END_OF_DOCUMENT_TOKEN_TO_BE_REPLACED

The first of the three 38-story Amazon office buildings topped out a while back, but the crane was still working to deliver exterior siding and rooftop materials for a few more weeks. Yesterday, though, it started coming down.

And, as you might guess, taking 40 stories of crane is a lot of work. Today, they got it down to about floor 30, and then spent most of the afternoon taking off one of the braces that had stabilized the crane bolted to the building’s core.  Here’s what that crane stabilization looks like, in two views. The first is how it looks when they first attach it to the building core:

And then as the floors get built out and the exteriors are put on, the crane seems to be just hanging off the glass, but we know it’s not because of that previous image.

Yes, that’s a worker up there, he had just climbed out the building onto the crane by walking on those struts. Eventually four workers climbed out and up several floors to where the next part of the crane was going to be detached and lowered.

Just looking at these people working that high up, so exposed, kind of made my stomach flip-flop a few (dozen) times.

After about an hour of prep, they slid out one section and carefully lowered it to the ground, where it looked like this:

(For you crane fanatics, see the bottom of this piece and the bolt holes? Then look at the top of the frame and see more bolt holes. Yep, that’s all that holds a crane together, along with the struts. So respect the crane next time you see one!)

Two at the West Seattle Farmers’ Market, one on guitar…

And one on some kind of mouth-blown mini-keyboard thing…

And one downtown outside Pacific Place.

Thanksgiving weekend is a great time to visit the Olympic Peninsula. The warm-weather visitors have all fled the scene, so the hardier winter visitors get solitude, silence, and, sometimes, snow. Sometime before noon, my nephew and I set out to see what the day would bring.

Blue skies, bare branches, and a light dusting of the white stuff begged for photographs to be taken. We obliged, sharing our finds on Snapchat, Facebook, and Twitter.

And forget about buying a flocked Christmas tree. Nature has done those sad city-corner lots one way better. I’ll just use this in place of the expensive sad things they sell.

We drove down a plowed and sanded road and were rewarded with this view of the Hoh River.

The first coastal stop was, appropriately enough, First Beach, near La Push, famous for apparently being in some Twilight movie neither of us had seen (and never will). The beach was cool enough on its own, endless surf and even some hardy surfers trying to catch a wave.

Sea stacks line out from the bluff, and by the look of the waves, what’s still standing out there is pretty tough rock.

The driftwood is mostly huge logs, stripped to their essence by the pounding of the waves. It’s hard to believe these things washed down from the mountains and then ended up here.

I can’t decide if this one is a seahawk head or a weird alien with tiny arms reaching out to possess whoever gets close.

Some are sculptural and haunting.

We weren’t the only ones enjoying the sunshine despite the chill.

Before we left, we each built a cairn, carrying on my personal beach tradition.

Next up was Ruby Beach, where I’d been before, but it’s beautiful enough to take another look.

The half moon over the cliff was breathtaking.

And, yes, another cairn to mark our visit.

Last order of the day? A beach sunset back at Kalaloch, the kind of leisurely sunset that lasts long enough to really enjoy it.

The sun slowly sank into the west, turning the water and sand into gold.

And as the last light faded into the dusk, all that was left was the sound of the waves, endless surf on sand.

And that was the end of our perfect day.